On Tuesday, the 21st, Marilyn, Joe, and I hiked Angel’s Landing in Zion National Park. Tuesday’s forecast was the best for the days that we were scheduled to be there – it was supposed to be mostly rain-free in the morning with light rain forecast for the afternoon. The remaining days in the Zion area were forecast to be considerably more wet.

I had hiked Angel’s Landing several years ago. On the day that I did it, the route was very dry and the footing was good. On the 21st, it wasn’t entirely dry and there was often wet sand underfoot. When I had done the route earlier, I found the chains to be optional; in dry conditions, they aren’t necessary to safely ascend and descend the route. In less than optimal conditions, however, I was very happy that the chains were there. 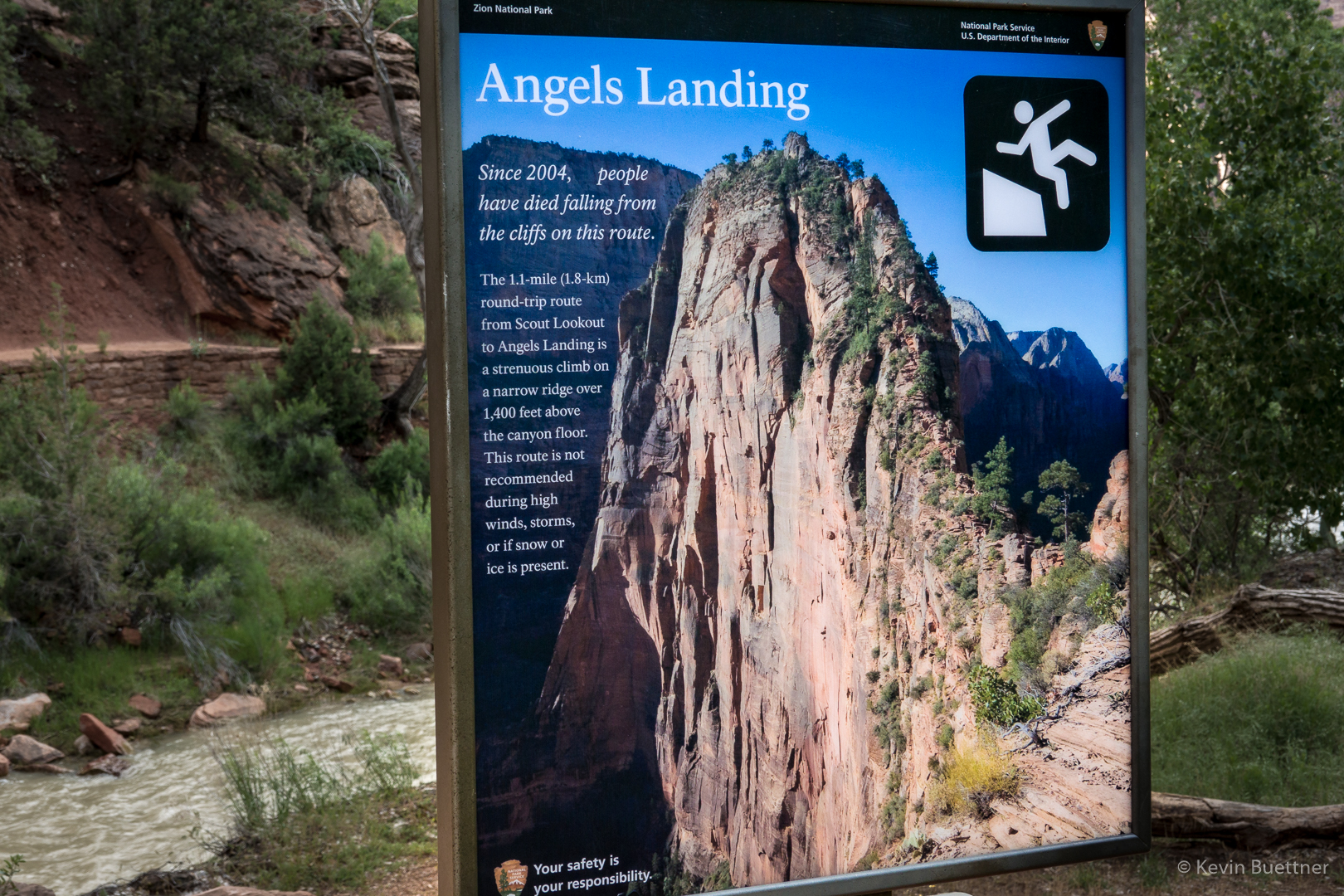 A view of Angel’s Landing from the lower (and flatter) section of the West Rim Trail. 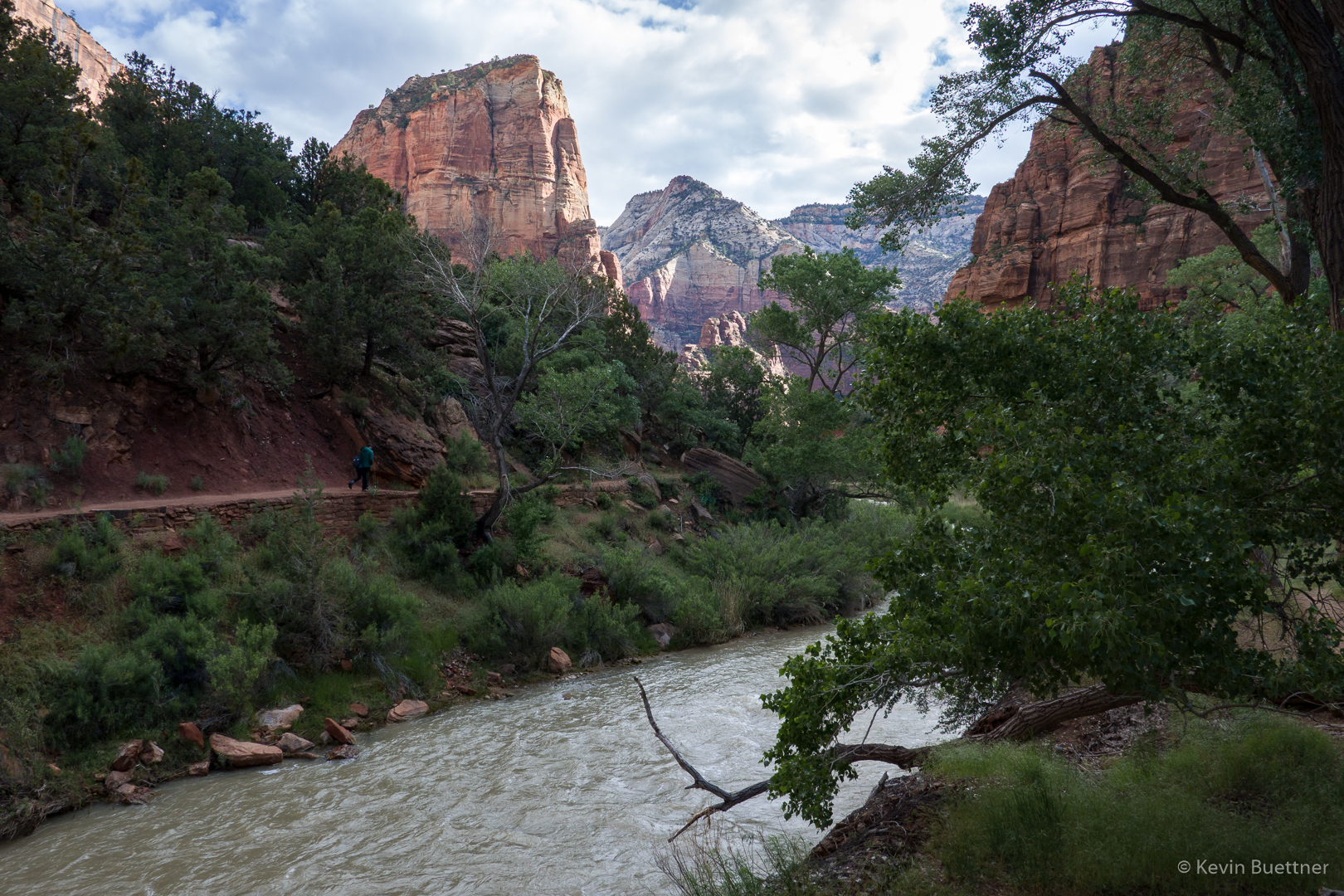 Another early look at Angel’s Landing: 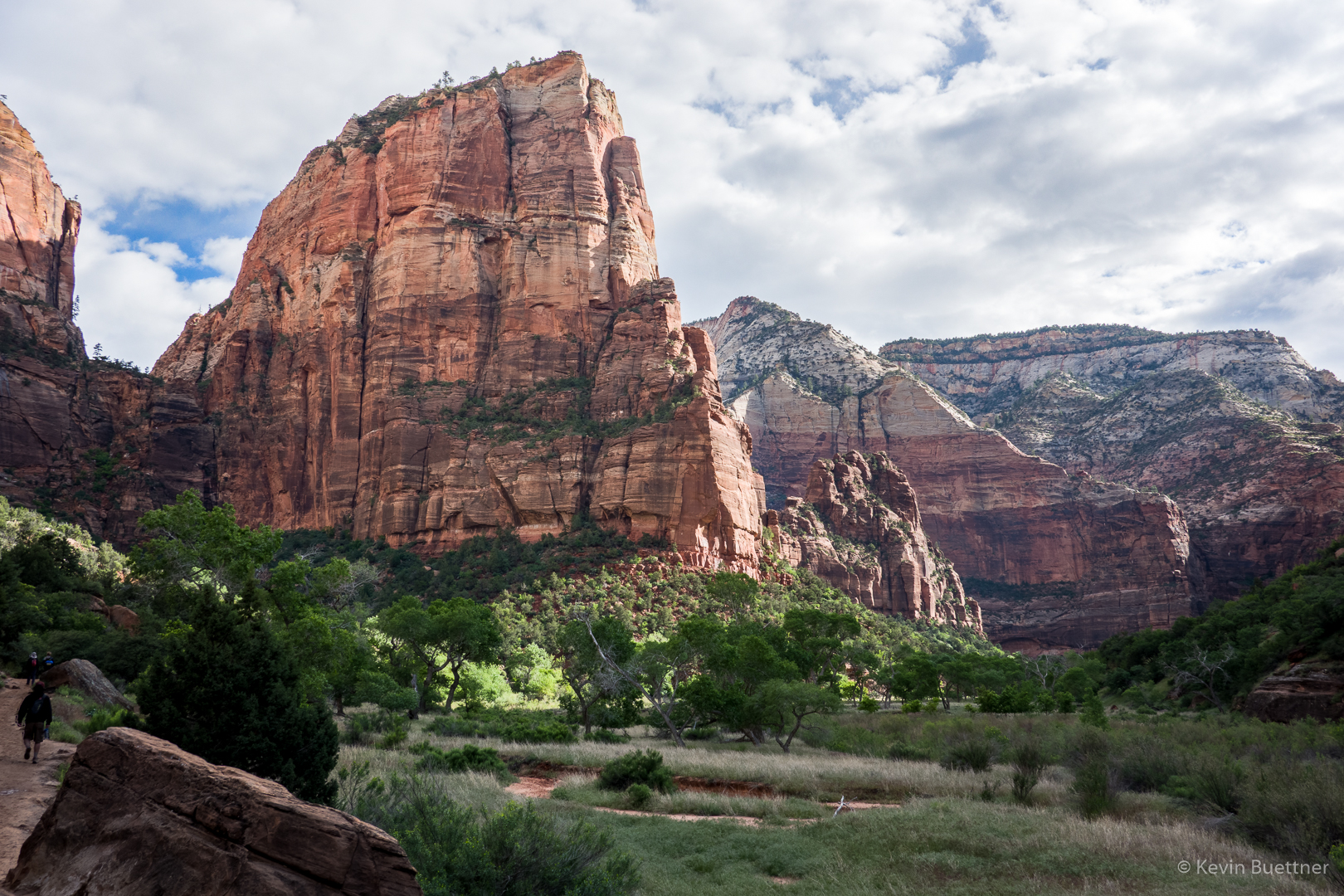 Looking back down canyon: 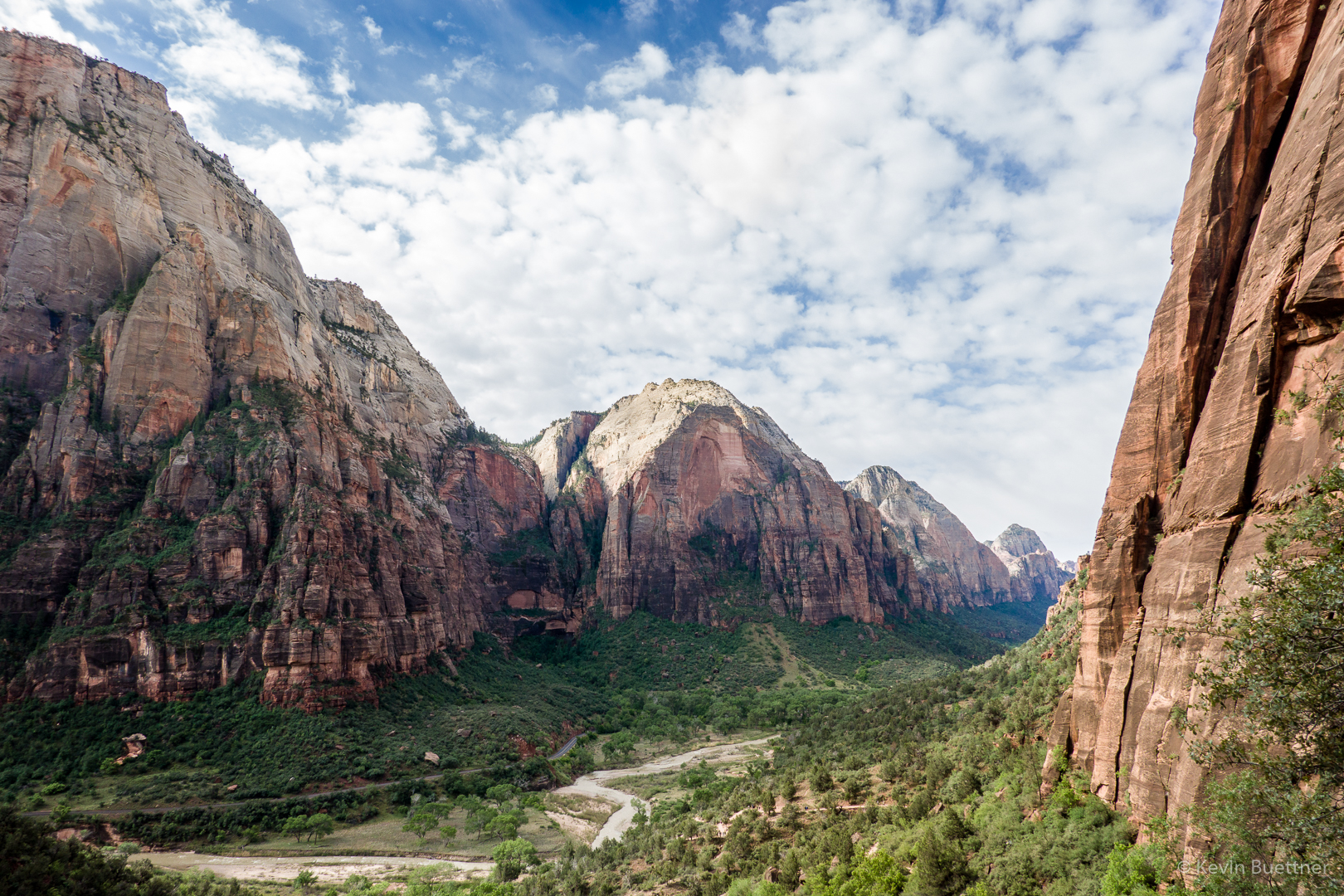 This was one of the easier sections on the West Rim Trail. It was relatively flat here with some interesting views. 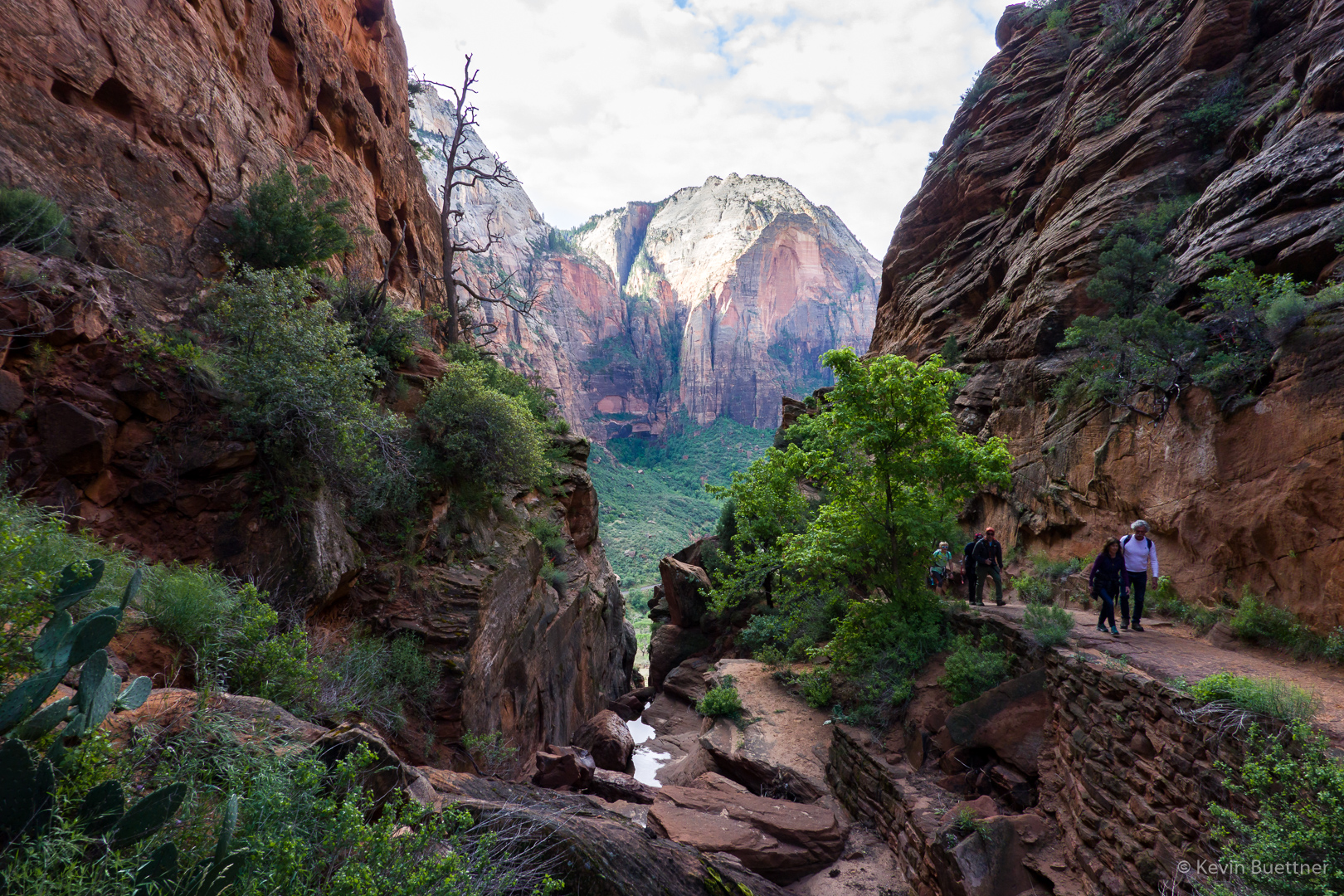 Looking up-canyon (below) from near the point where the above photo was taken: 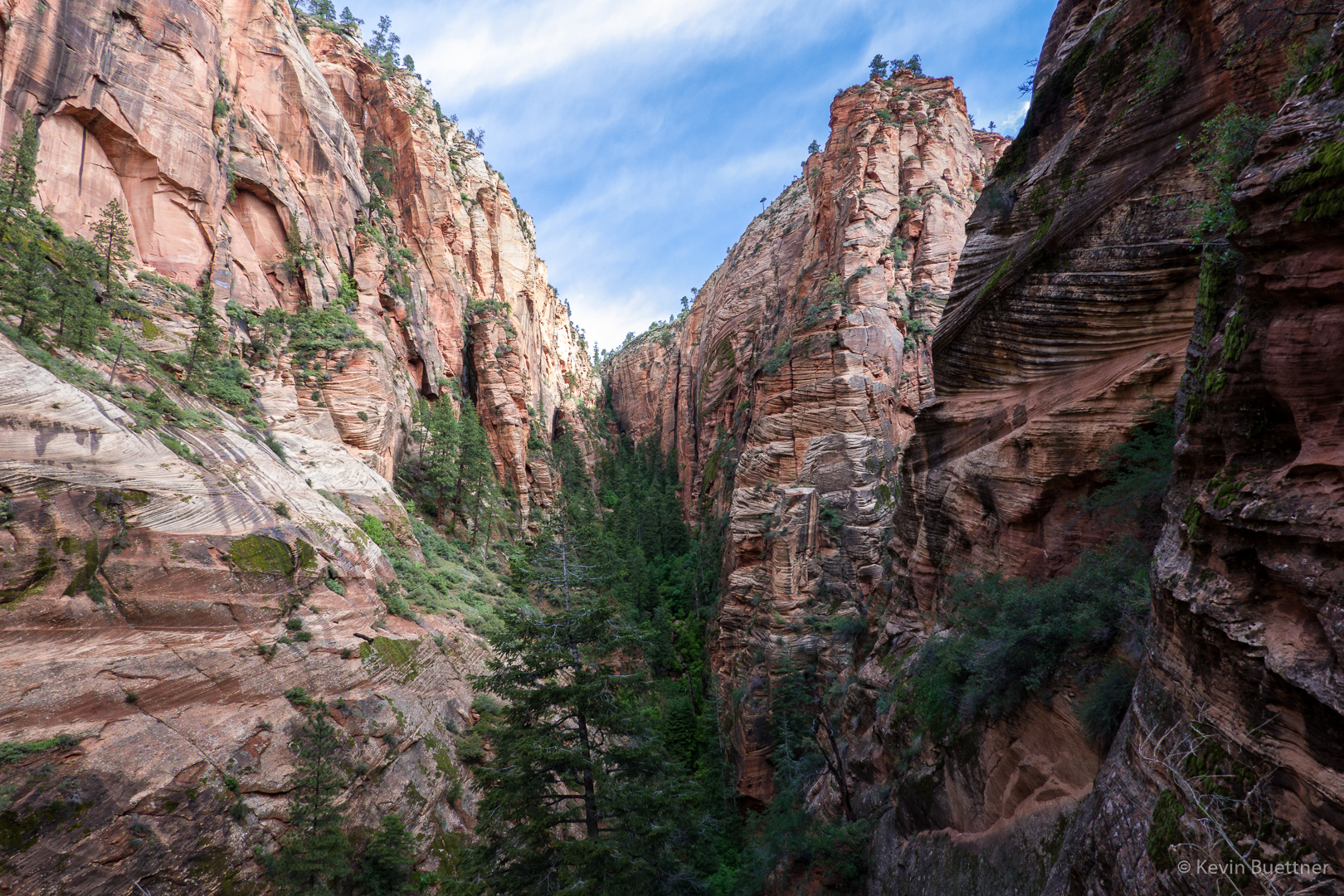 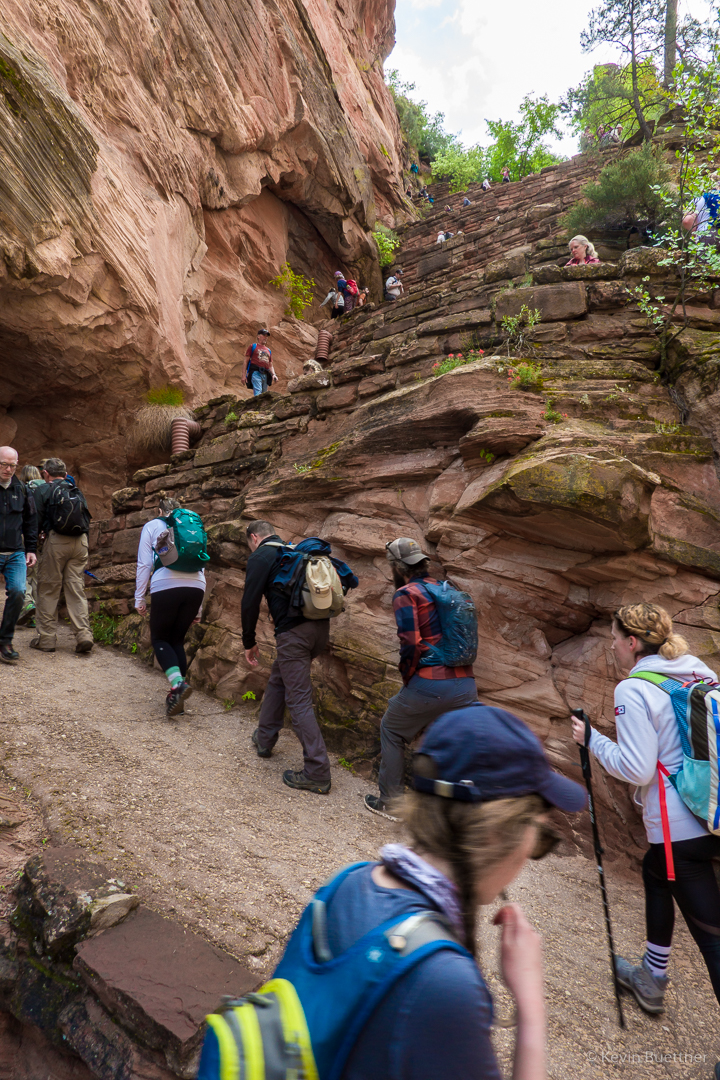 Scout Lookout had some nearby bathrooms and a mass of humanity milling about. This photo is from near the start of Angel’s Landing. The route was crowded that day; groups of (often) ten to twenty people were self organized to travel up or down together. Groups going in one direction would find a landing at which to wait while a group going in the other direction would negotiate a steep and narrow section. At this particular spot, I remember there being a steep drop off to my left. We waited there for perhaps ten minutes for a group coming down. I got separated from Joe and Marilyn at this point. (Joe found some younger folks that he chose to hike with.)  After stopping a few few times on the next section, I reached another really big landing where I waited for Marilyn. Marilyn had hurt her knee earlier during our trip and opted to wait for me at this large landing. I think she made the right choice; the descent from the top is very steep and would have been hard on her knee(s). 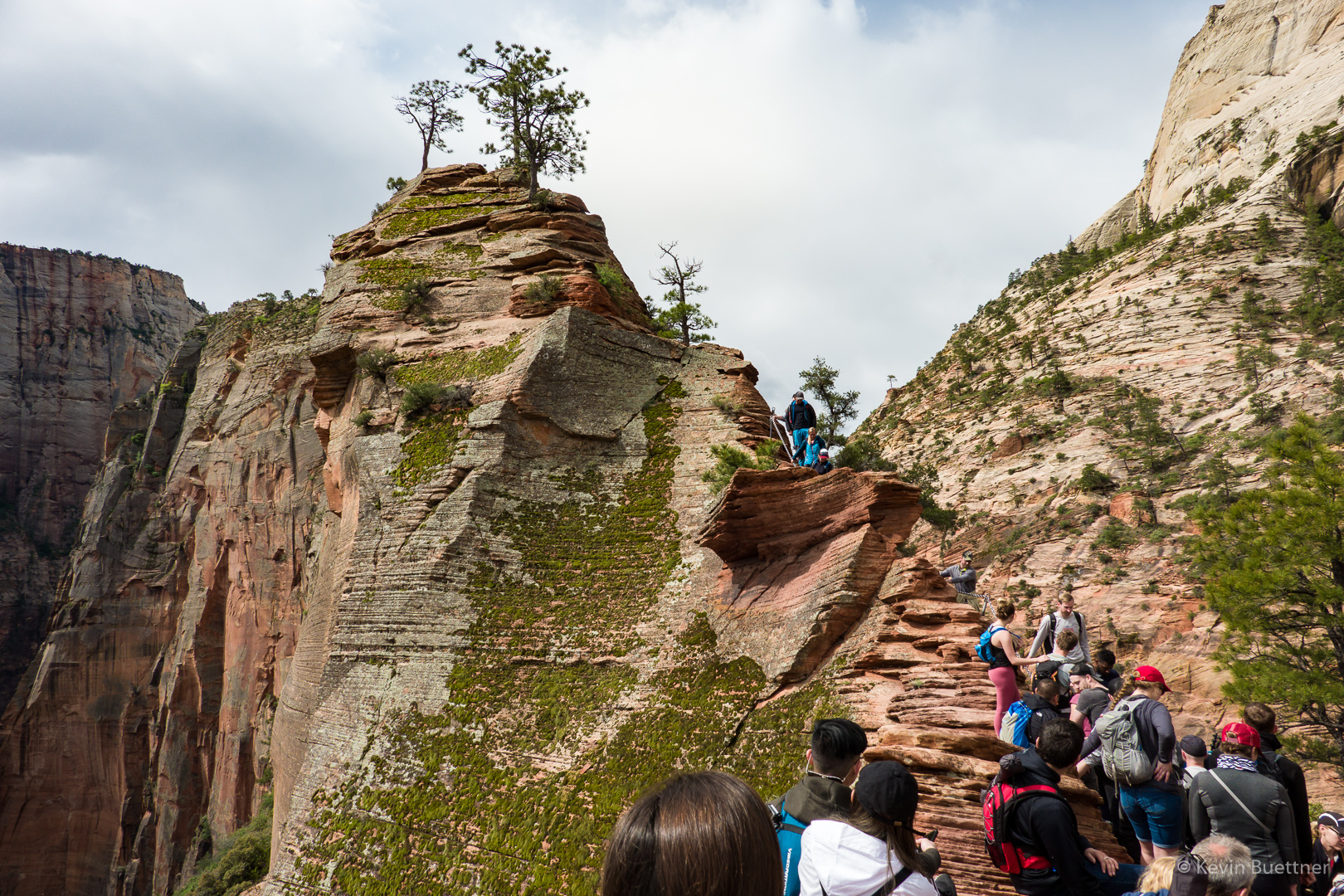 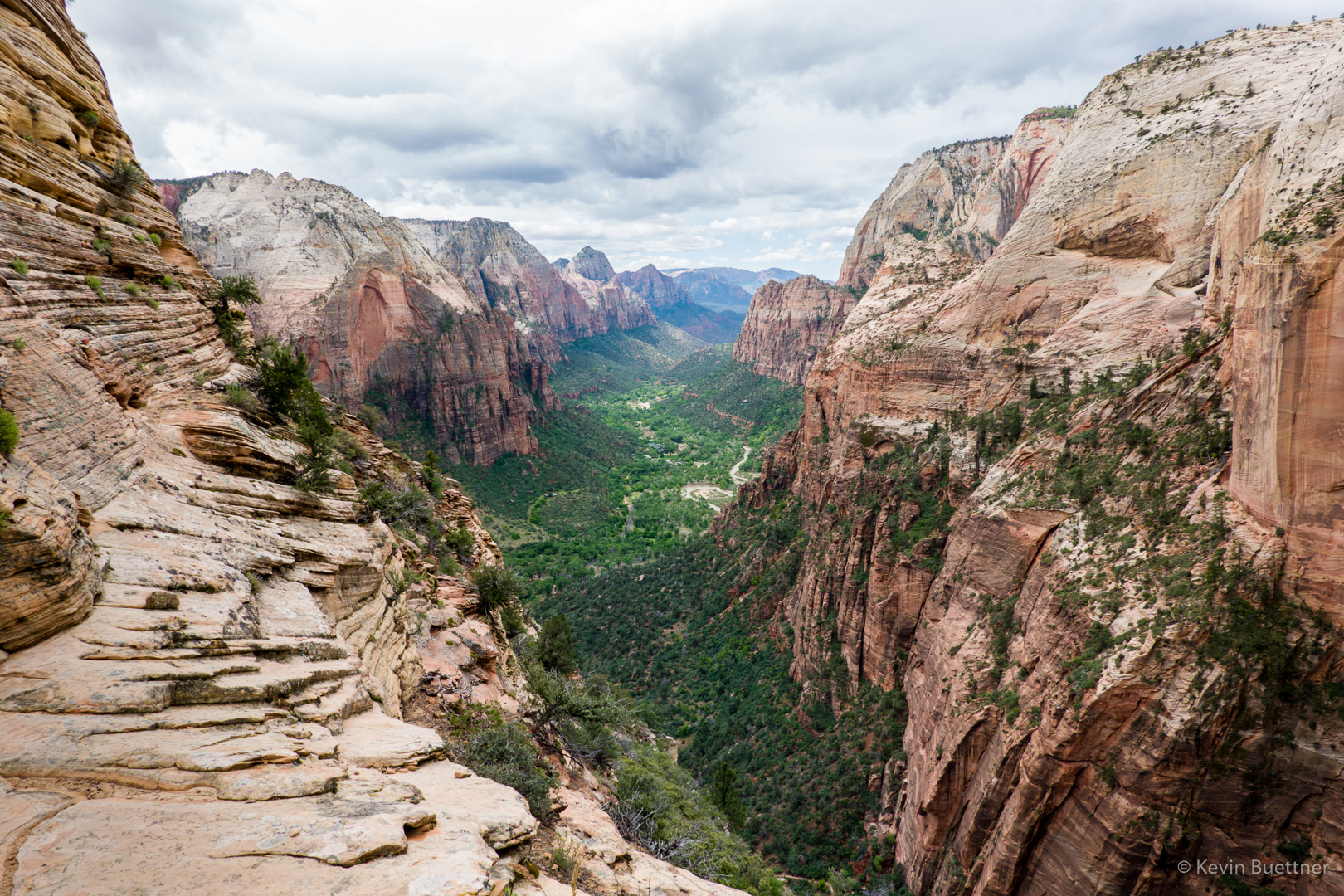 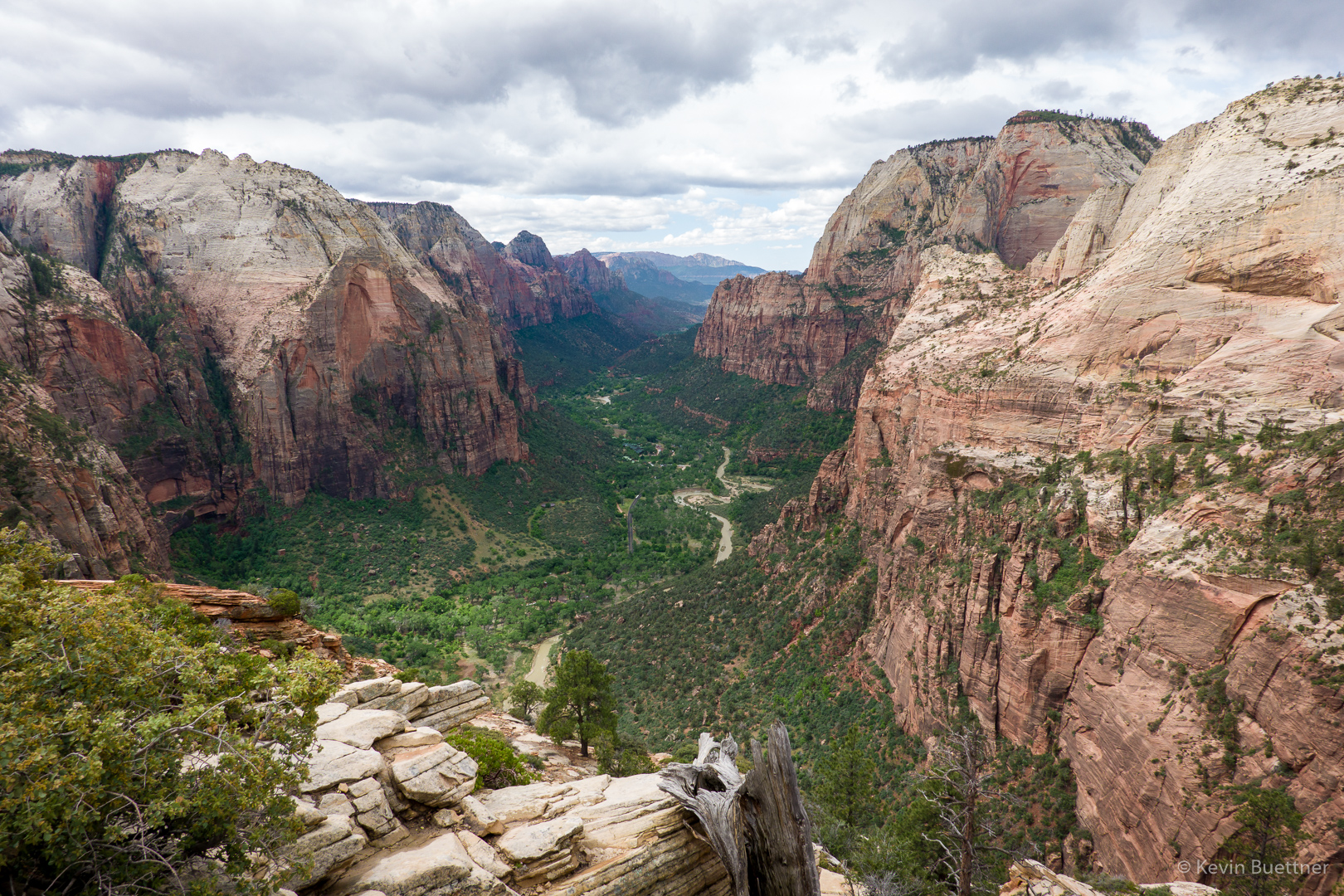 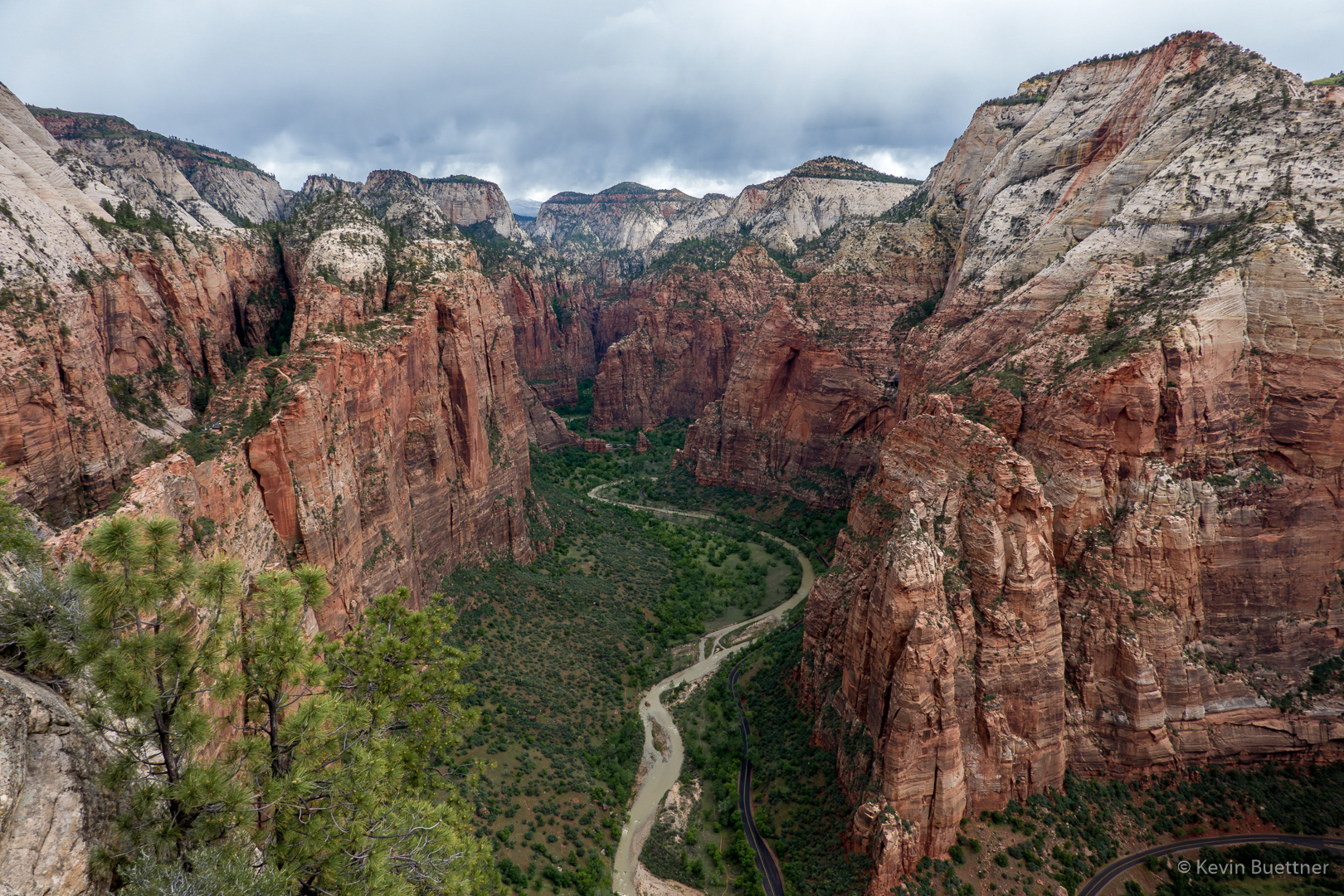 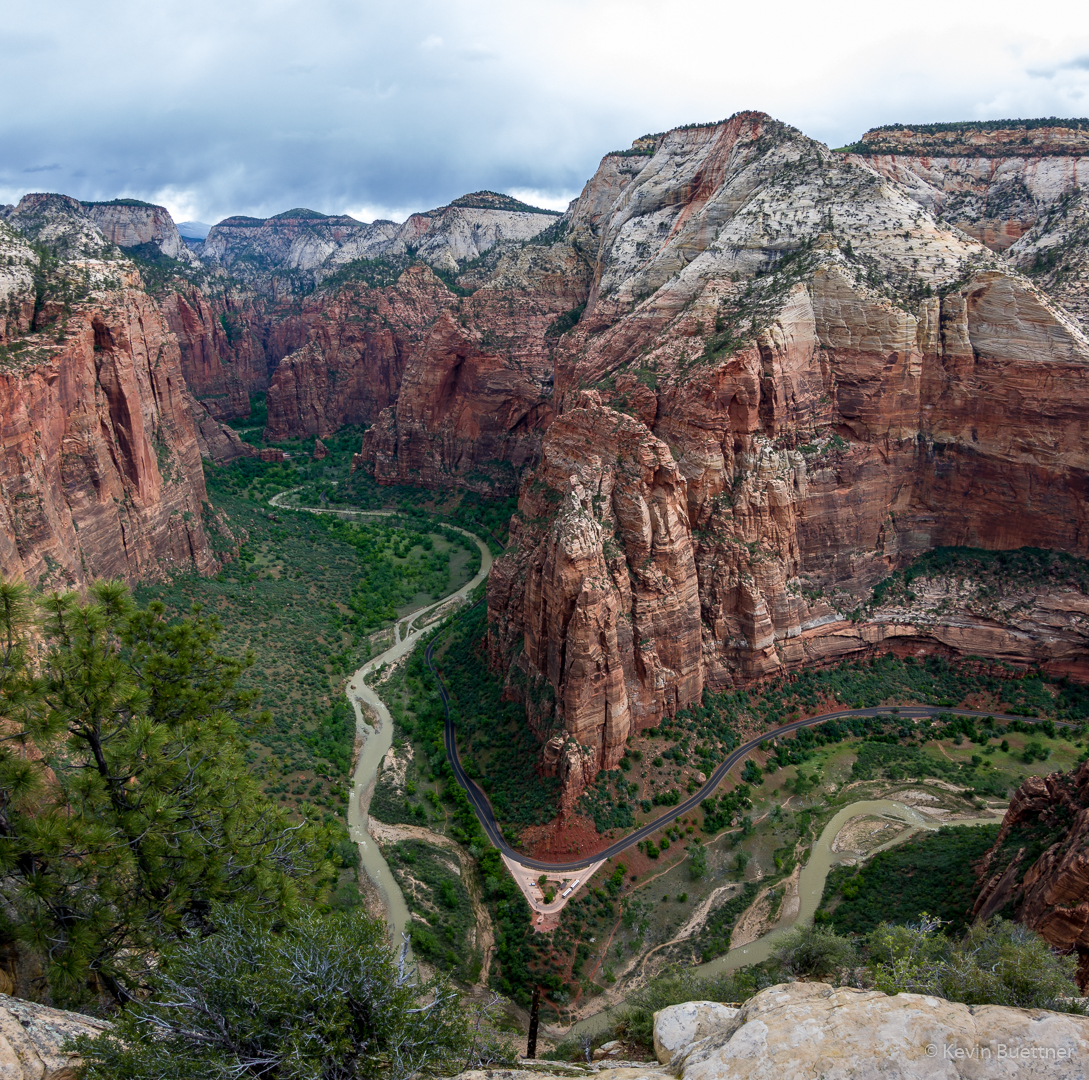 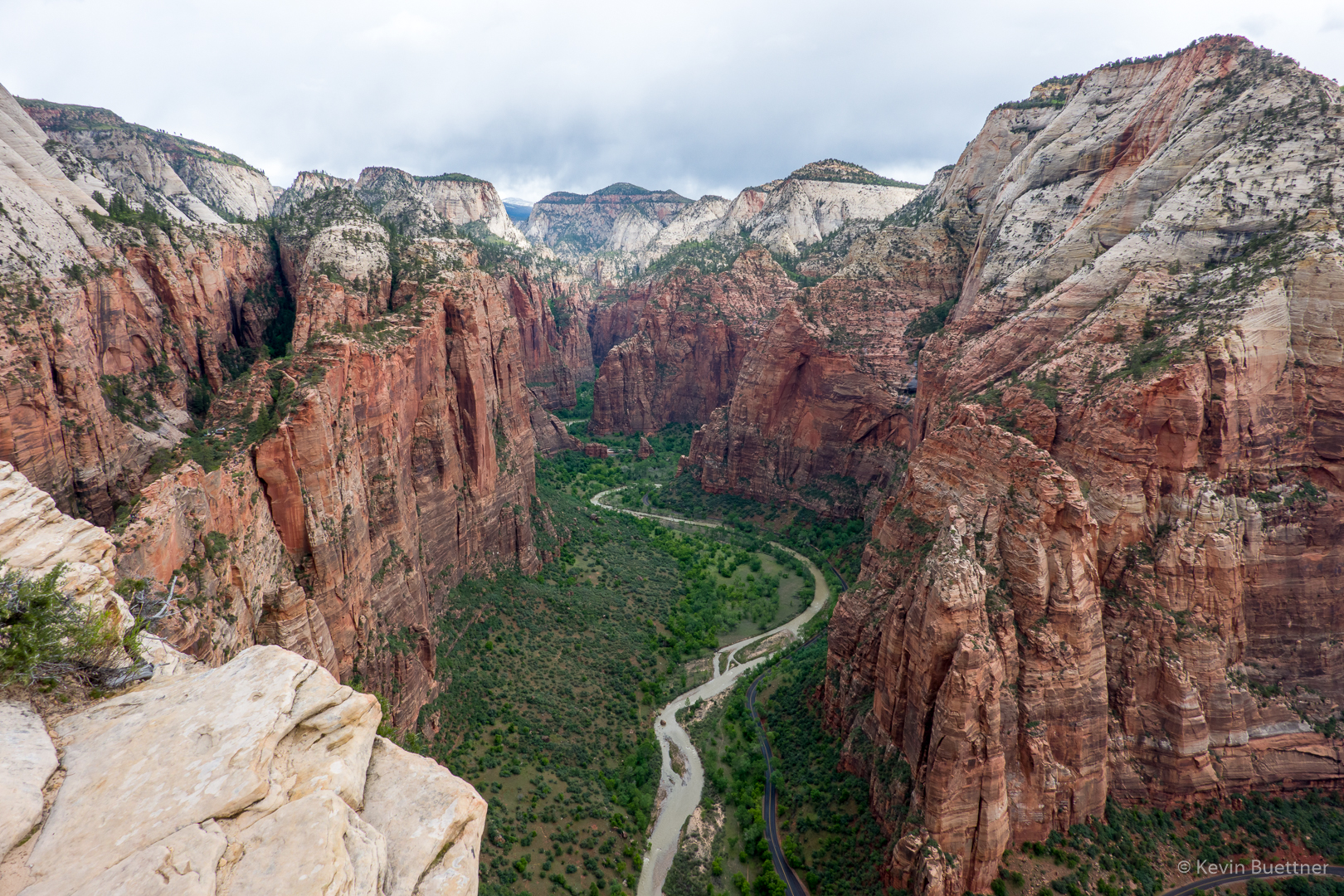 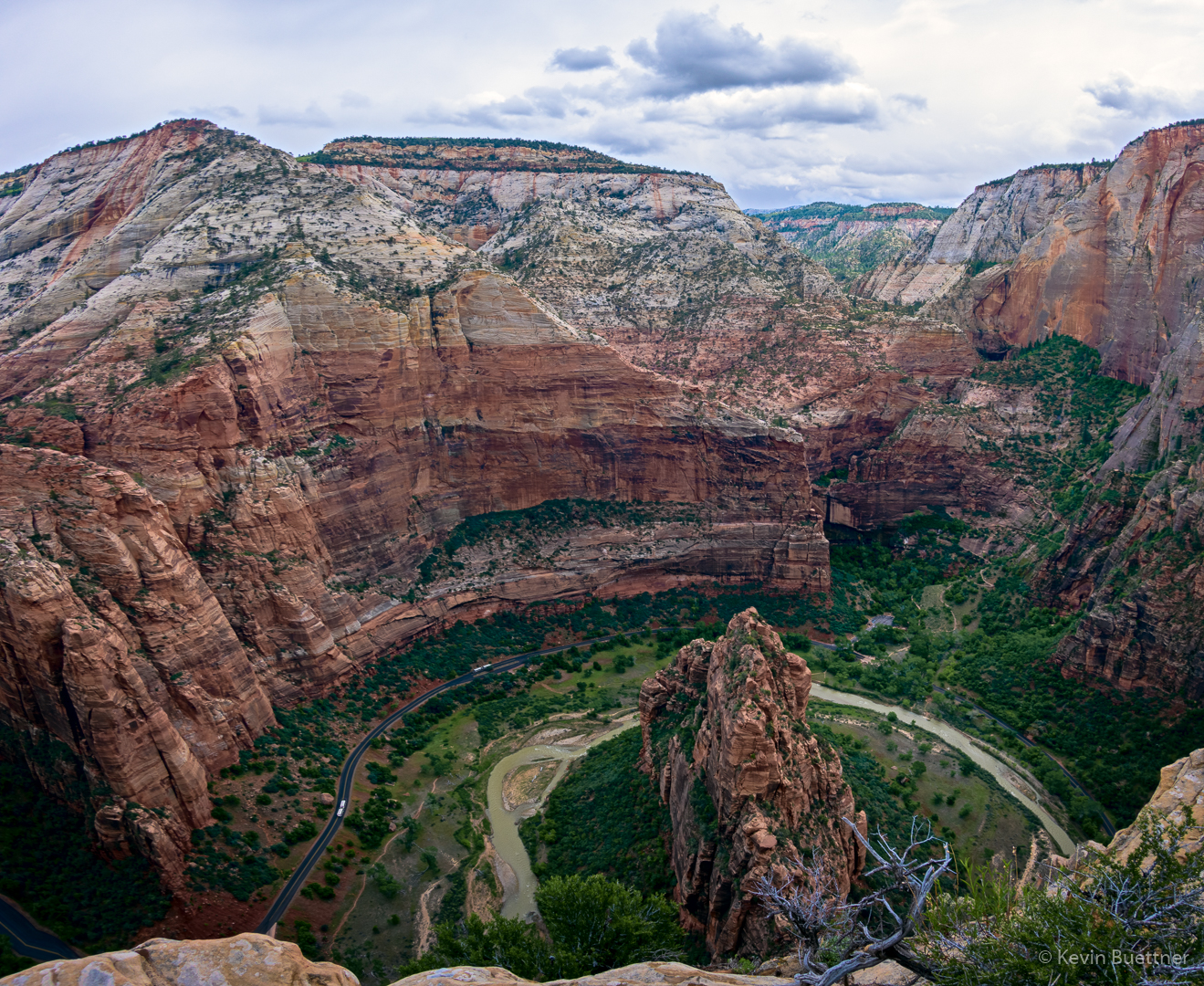 I’m on my way back down at this point. A little while earlier, I encountered Joe and his group finishing their ascent. 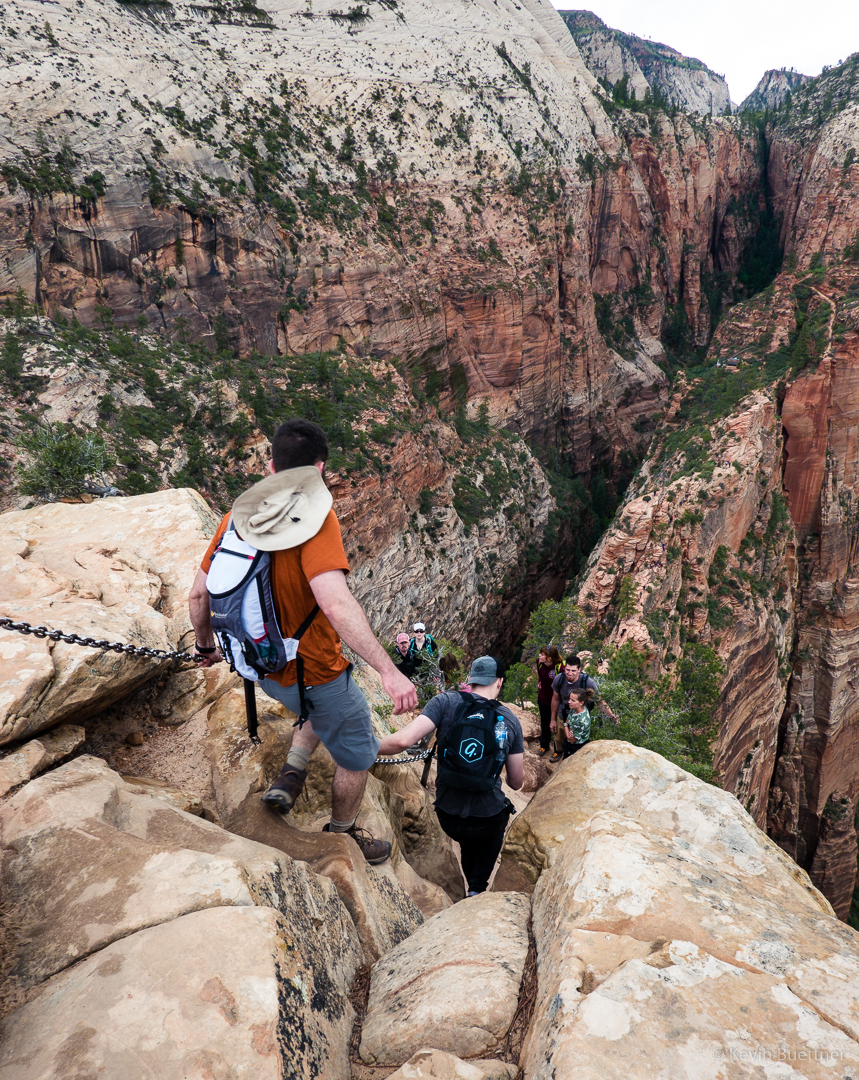 After finishing the descent to Scout Camp, the last part with Marilyn, I proceeded hike further up the West Rim Trail. There were some overlooks from which good views of Angel’s Landing could be found. 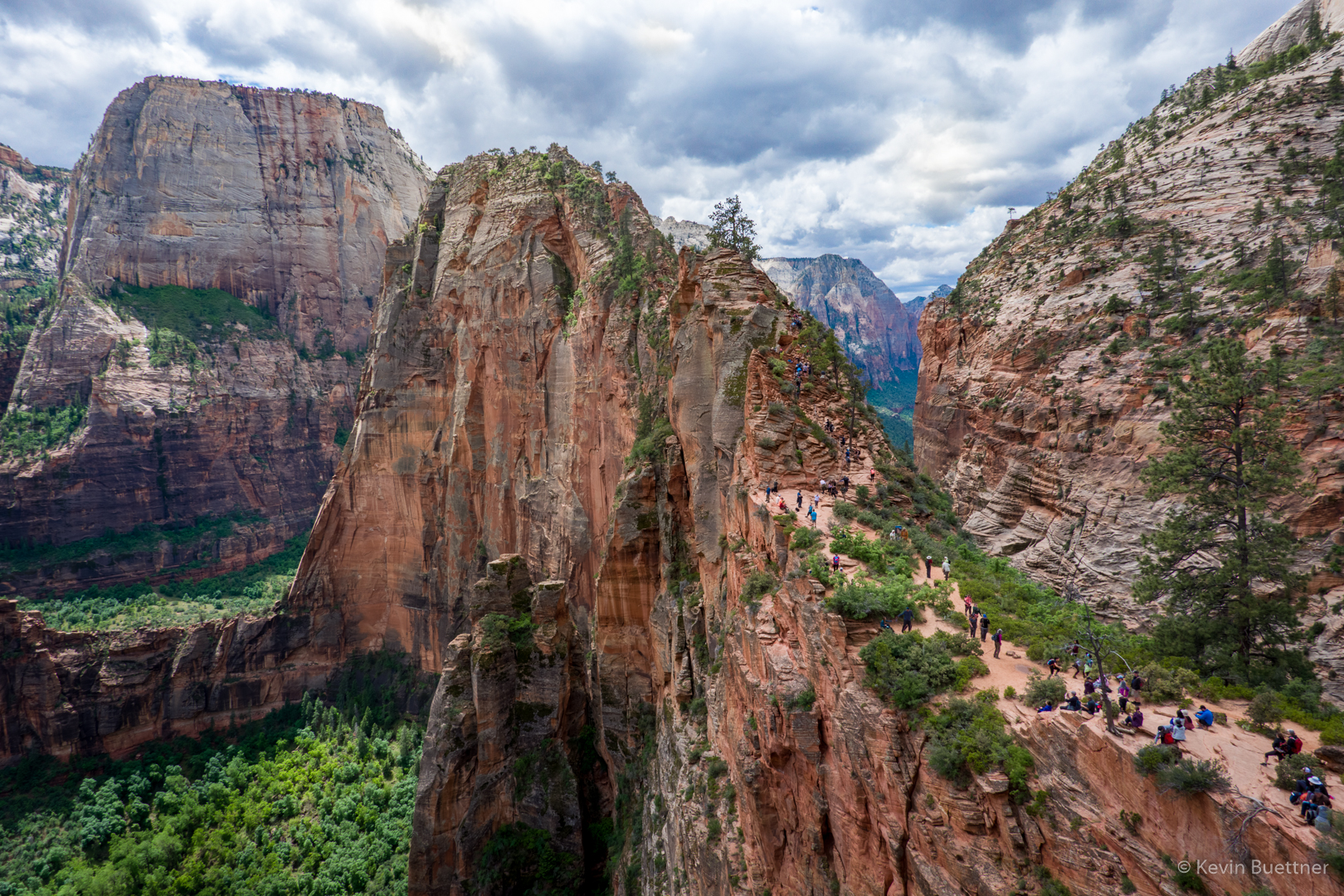 I really liked the upper parts of the West Rim Trail. It was considerably less crowded. The views were different too… 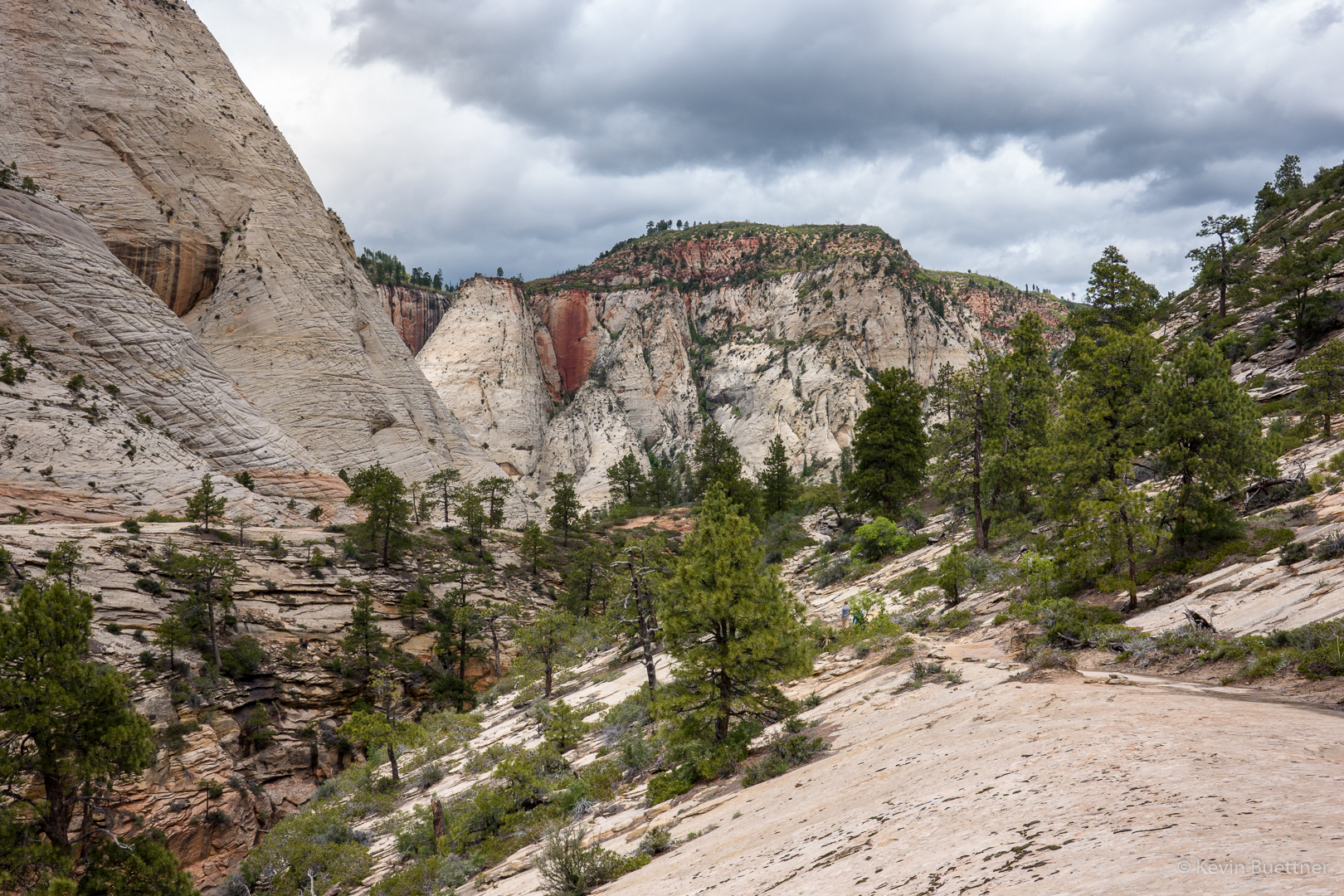 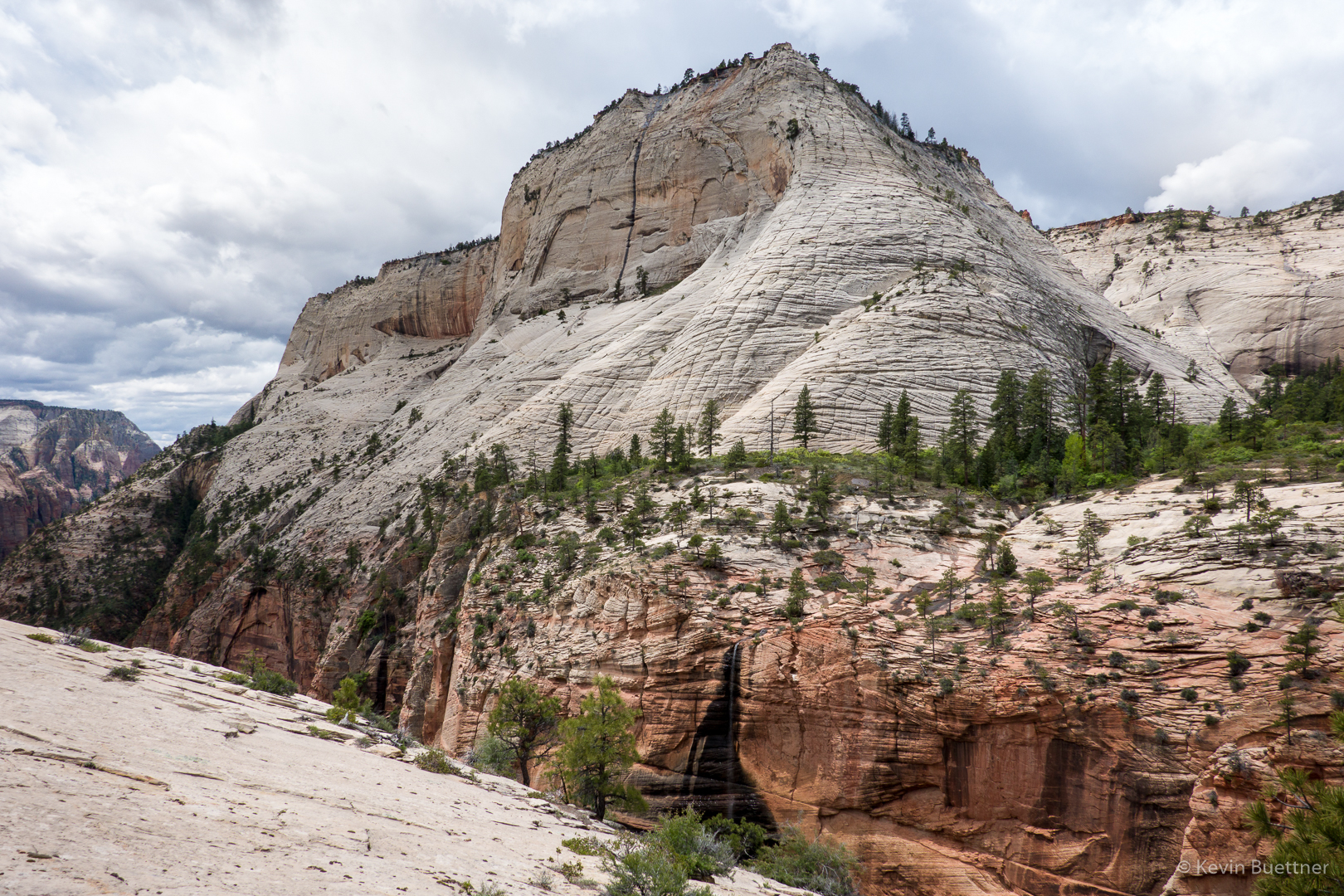 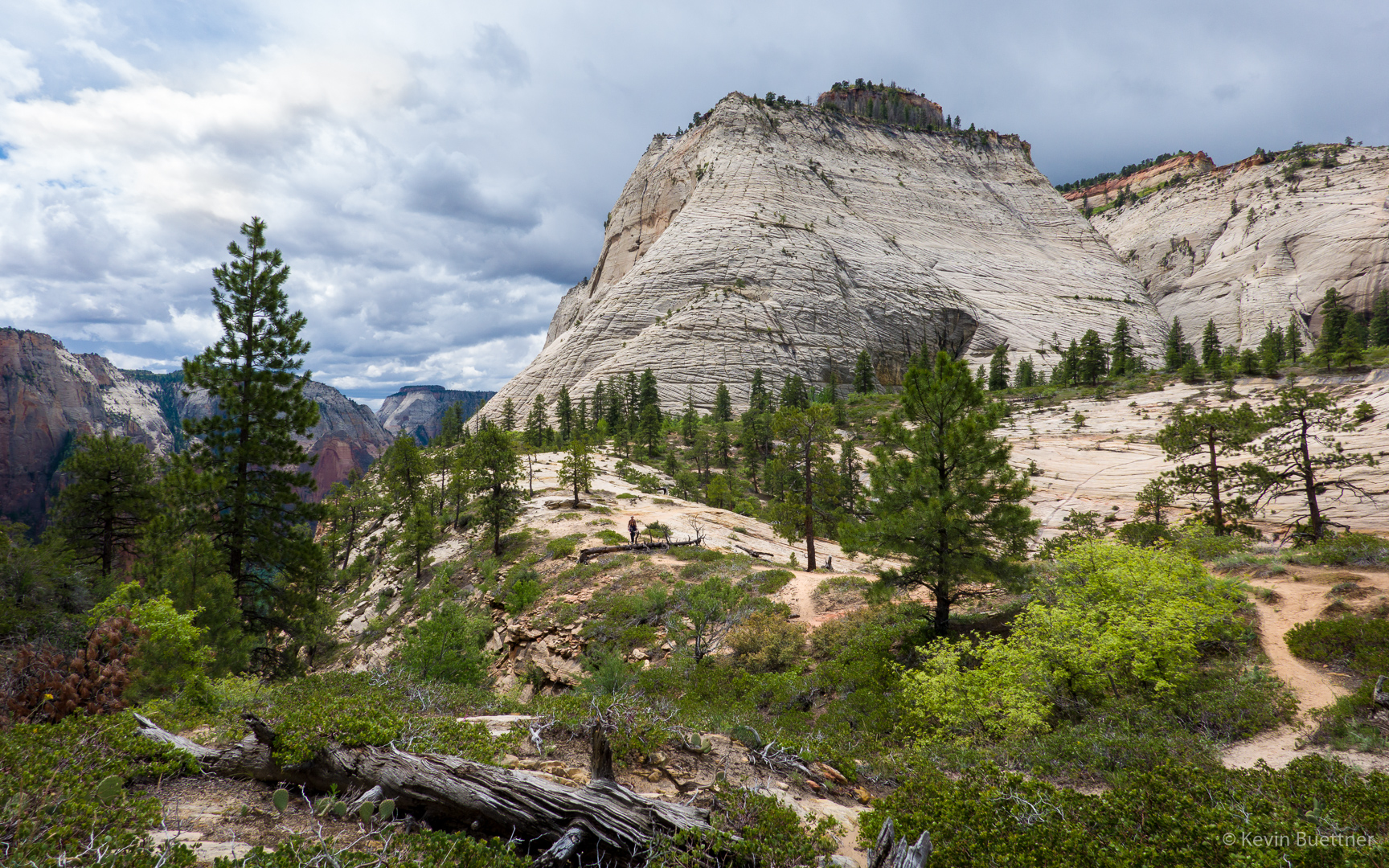 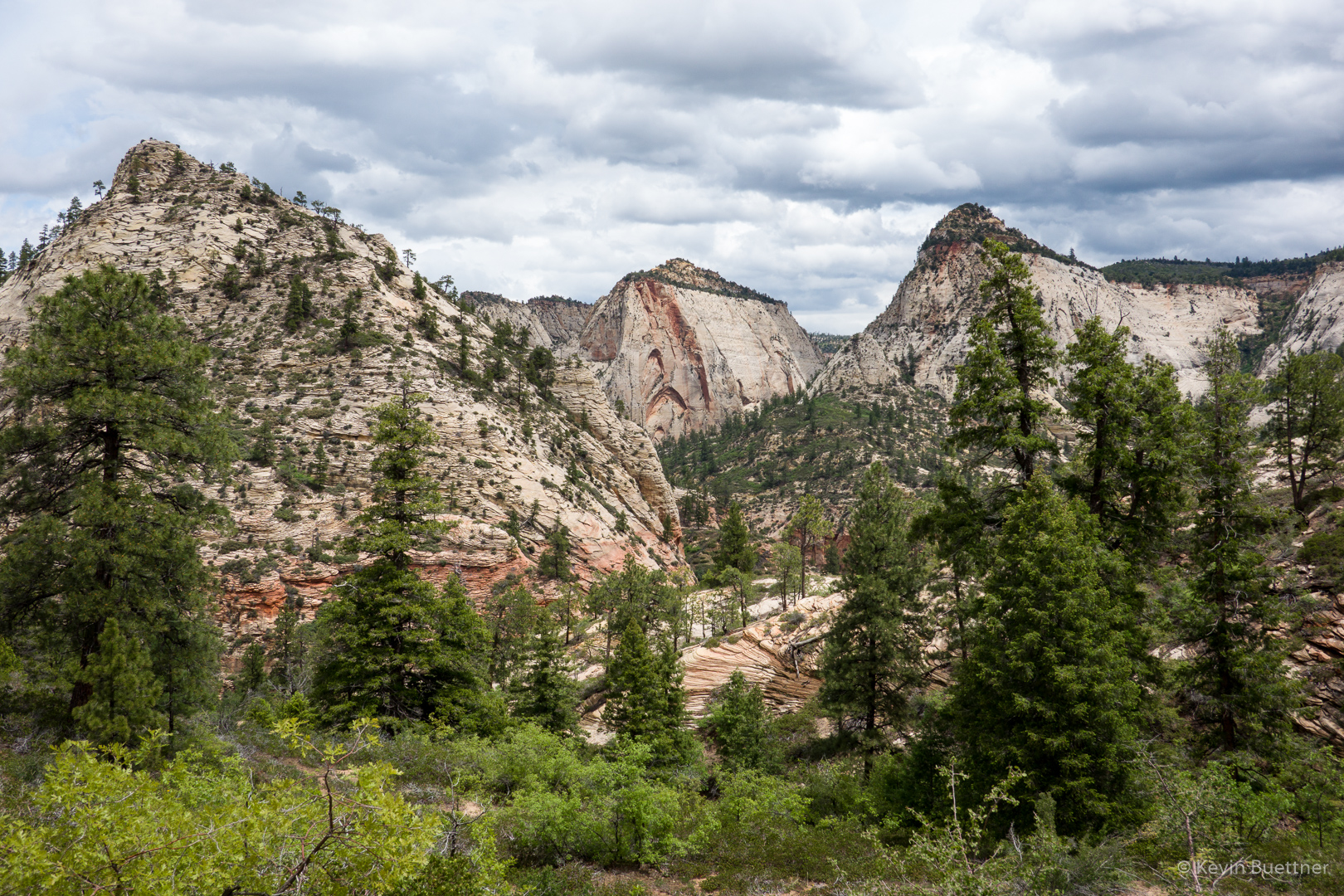 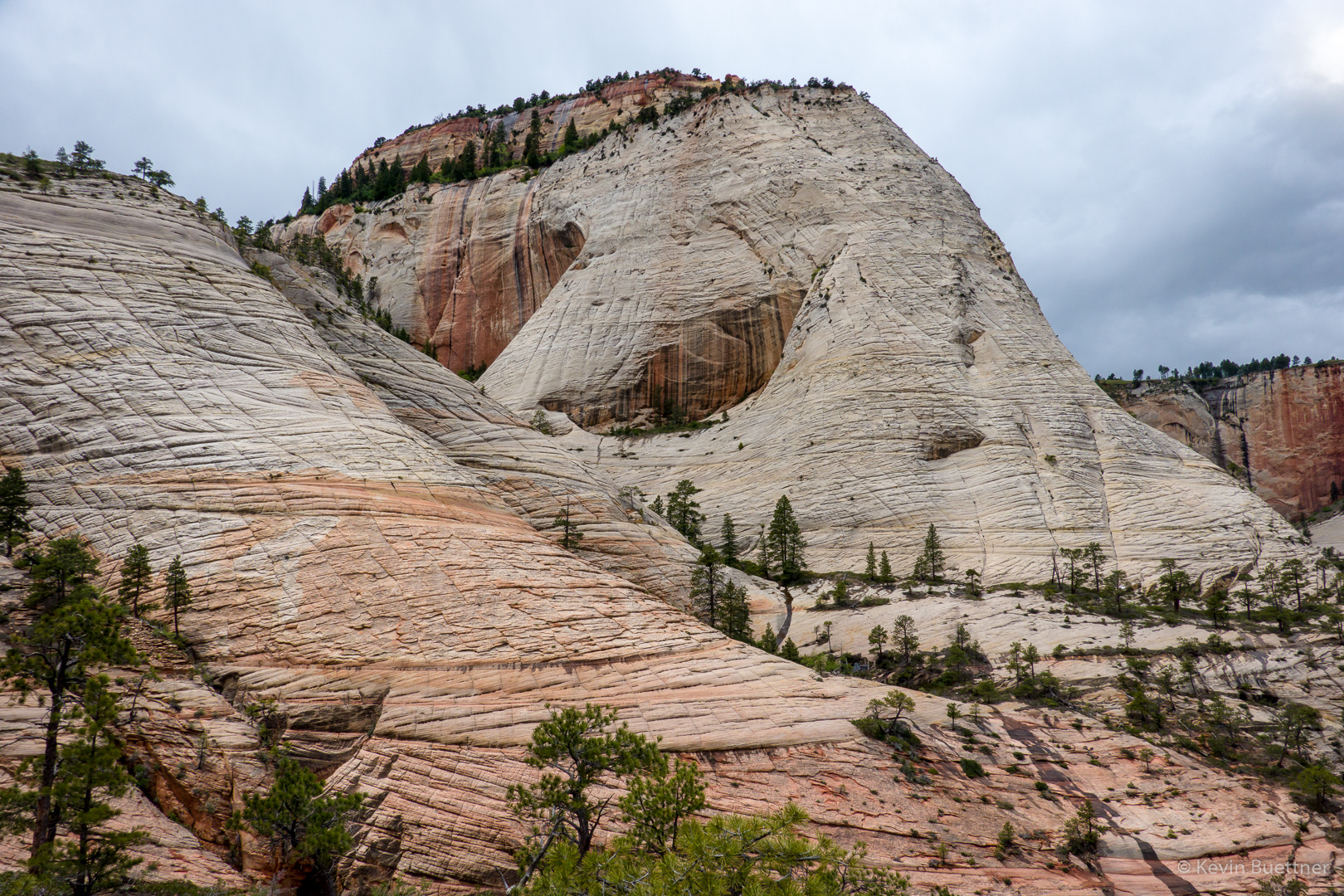 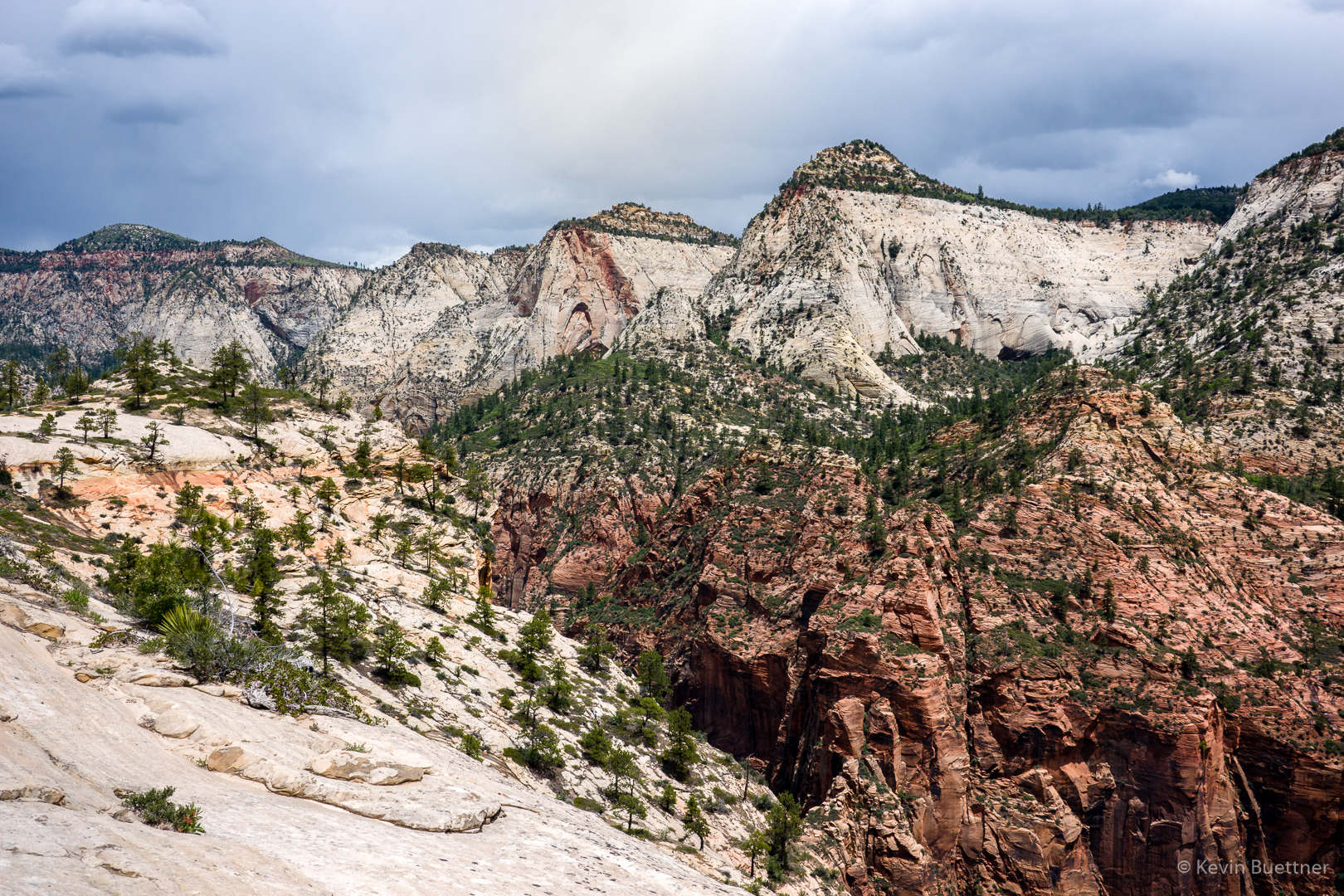 I hit a high point on the West Rim Trail and then proceeded perhaps a quarter of a mile further. Had I kept going, the trail would have descended a lot more before going up again. Instead of losing even more elevation which I’d have to reascend on the way back, I chose to turn around at that point. Along the way, I met Marilyn who, after meeting Joe, started up the West Rim Trail. It was at around this point that I took this photo. We’re still high above Scout Lookout at this point. 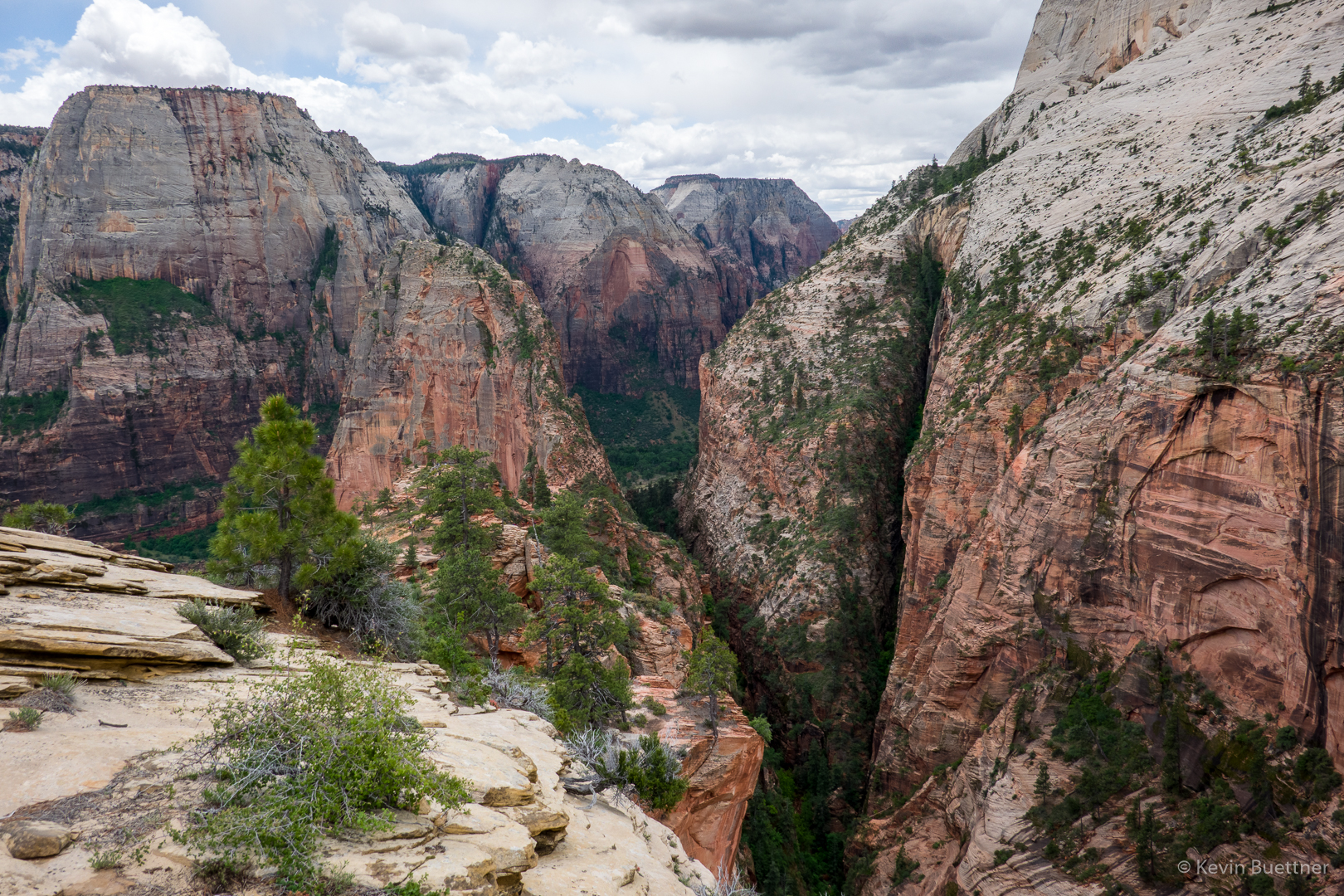 On the way back down to Scout Lookout, I zoomed in on a steep section of Angel’s Landing. Although it had been raining – hard enough for me to put on my rain jacket – there were still people going up and down the route! 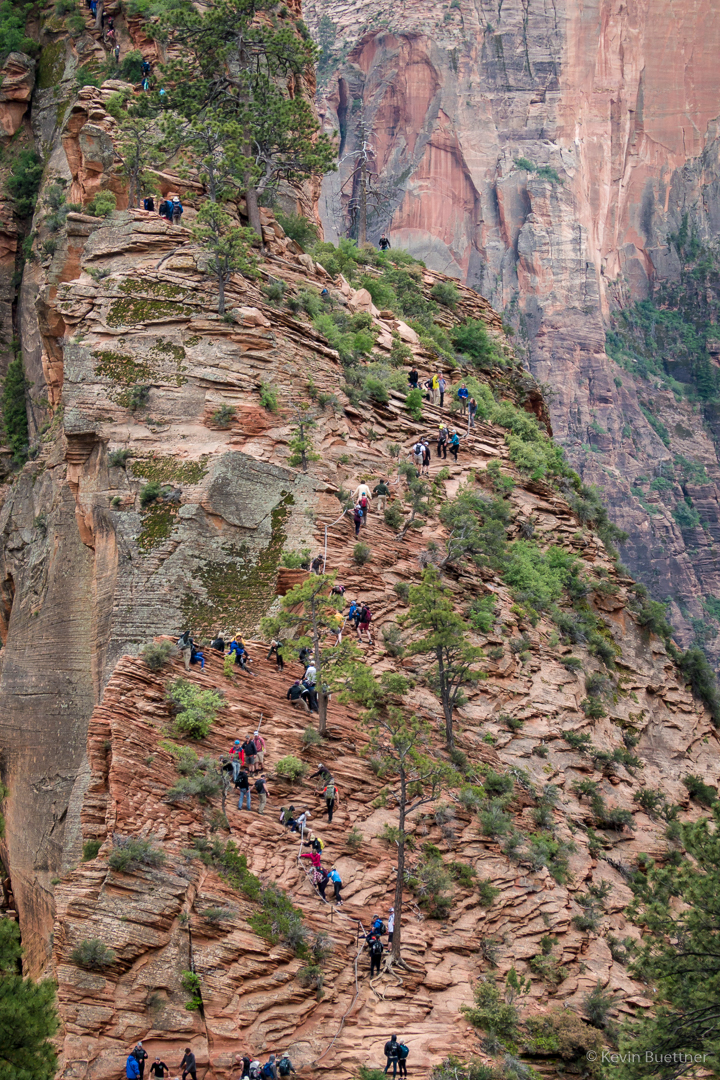 I took this photo from the West Rim Trail below Scout Lookout: 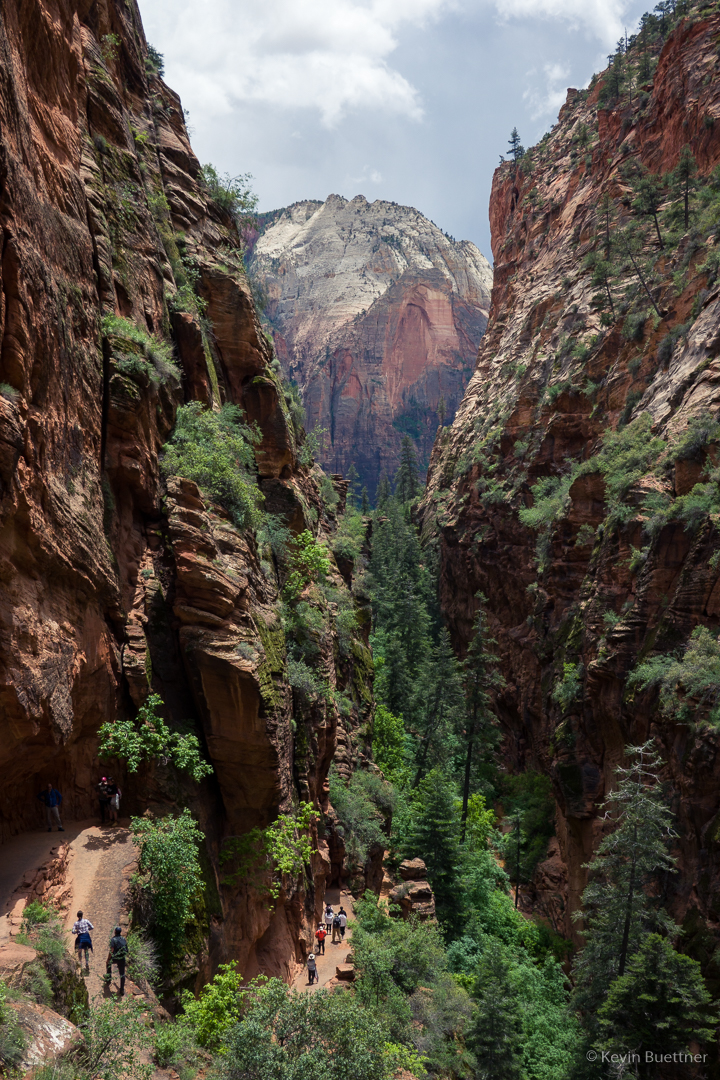