Tiger on a Ladder

Marilyn got out a ladder for changing a light bulb late this afternoon.  Tiger climbed the ladder while she was disposing of the old bulb… 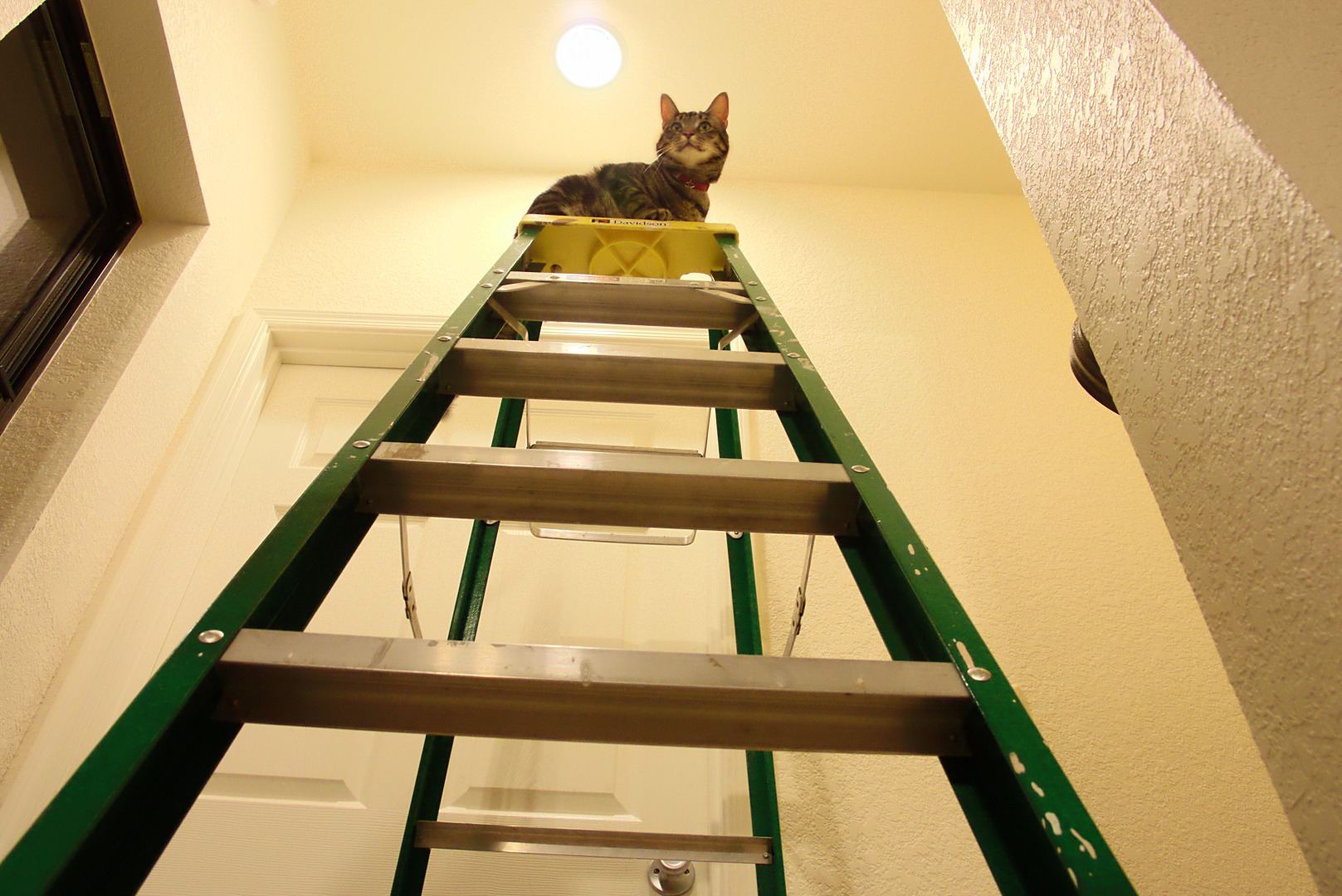 I processed the RAW file from the camera three times, once with a very low exposure compensation setting for the lightbulb, another time with a somewhat higher setting for the bright areas of the ceiling and the walls, and a third time for everything else. I created a tone map layer, but ended up not using it as it had too much noise due to the image being shot at ISO 1600.  I could have processed created the image with noise reduction on the RAW file conversion, but it didn’t look to me like it’d add enough interesting detail to bother.

I blended the two brightest layers by making a copy of the very brighest one and running curves on it.  I used this curve: 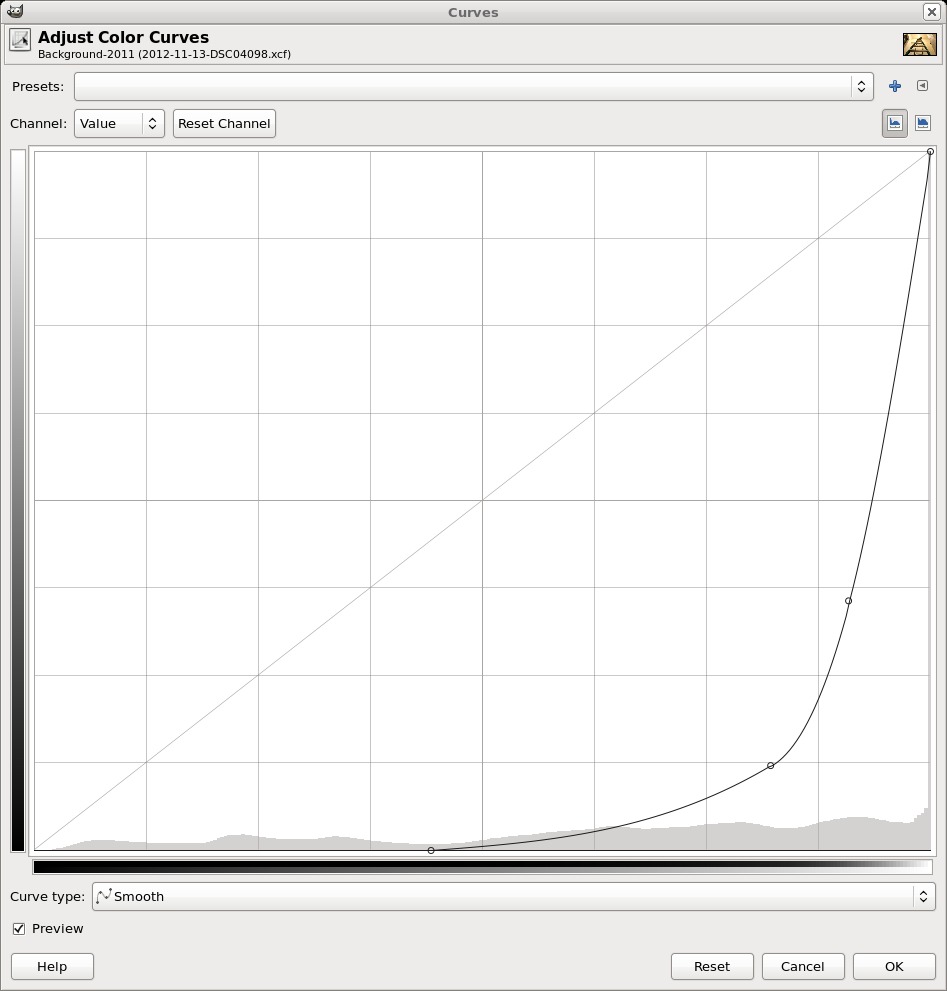 With that curve in place, the (copy of the) bright layer looked like this: 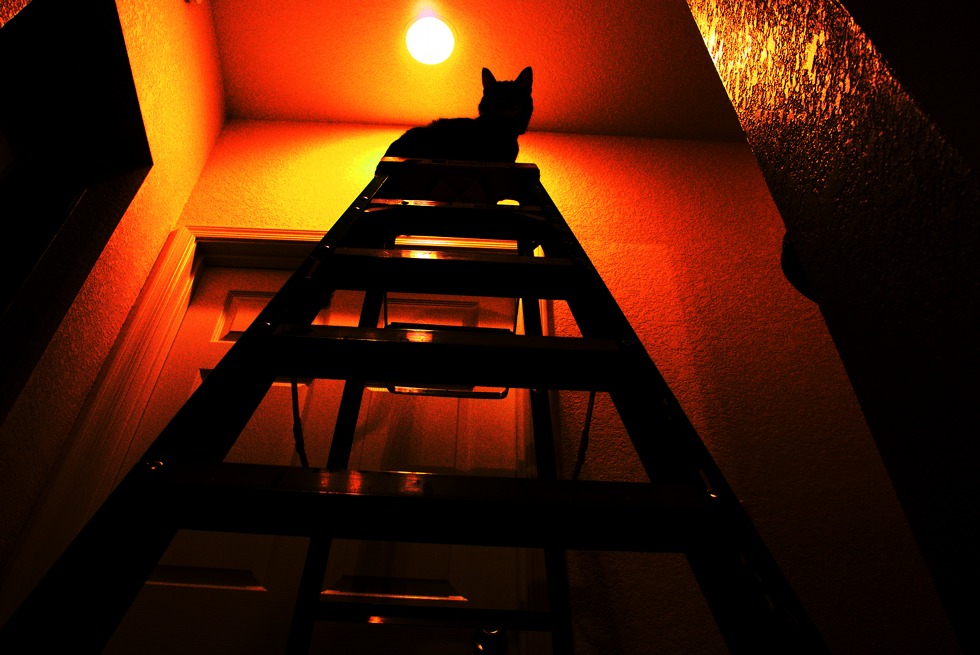 This is an interesting image in its own right, but I wanted to use it to create a layer mask for the second brightest layer.  To do that, I created a layer mask using a grayscale copy of the layer.  This is one of the options when creating a layer mask.  I then converted that mask to a selection and used that selection for creating a layer mask on the second brightest layer.  This removed most of the blown out areas of the image and gave it a more even tone.  It’s still bright on the ceilings and walls, but the texture is now evident.

For the light bulb layer, I adjusted the exposure compensation so that the right end of the histogram was entirely contained in the graph.  According to ufraw, there were no overexposed areas.

This is what the layers window looked like when I was finished: 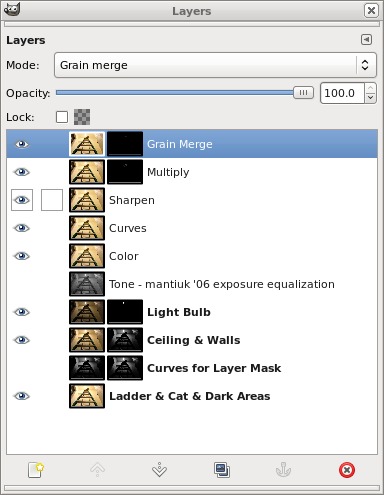 The fourth layer down, a Curves layer, was used to eliminate an empty spot at the left edge of the histogram.  This improved the overall contrast somewhat.

I duplicated the Curves Layer and ran the unsharp mask filter to sharpen the image.

I usually stop after sharpening, but I thought that the cats face was too washed out, especially on the left side (his right side) due to the light.  So I created the Multiply layer to darken that area and then a Grain Merge layer to add even more contrast to certain parts of his face and body.  I simply painted white into a transparent layer mask where I wanted extra darkening or contrast.  I used a fuzzy brush with the opacity set at only 10% so that each brush stroke would only have a small effect.  If I didn’t like the result, it was easy to undo that stroke or even several strokes preceding.  (If I really hated it, I could have deleted the layer mask and started over with a fresh mask.)

The only layers that directly contribute to the final image are the top three layers.  The other, lower, layers were important as intermediate steps, but I could disable the visibility of these layers without affecting the displayed result.  I keep them enabled when I save the XCF file, however, so I know which layers are important when I open the file back up again.  I will sometimes tweak some of those lower layers and then recreate the upper layers with the new settings.

A similar shot, but taken from slightly higher up: 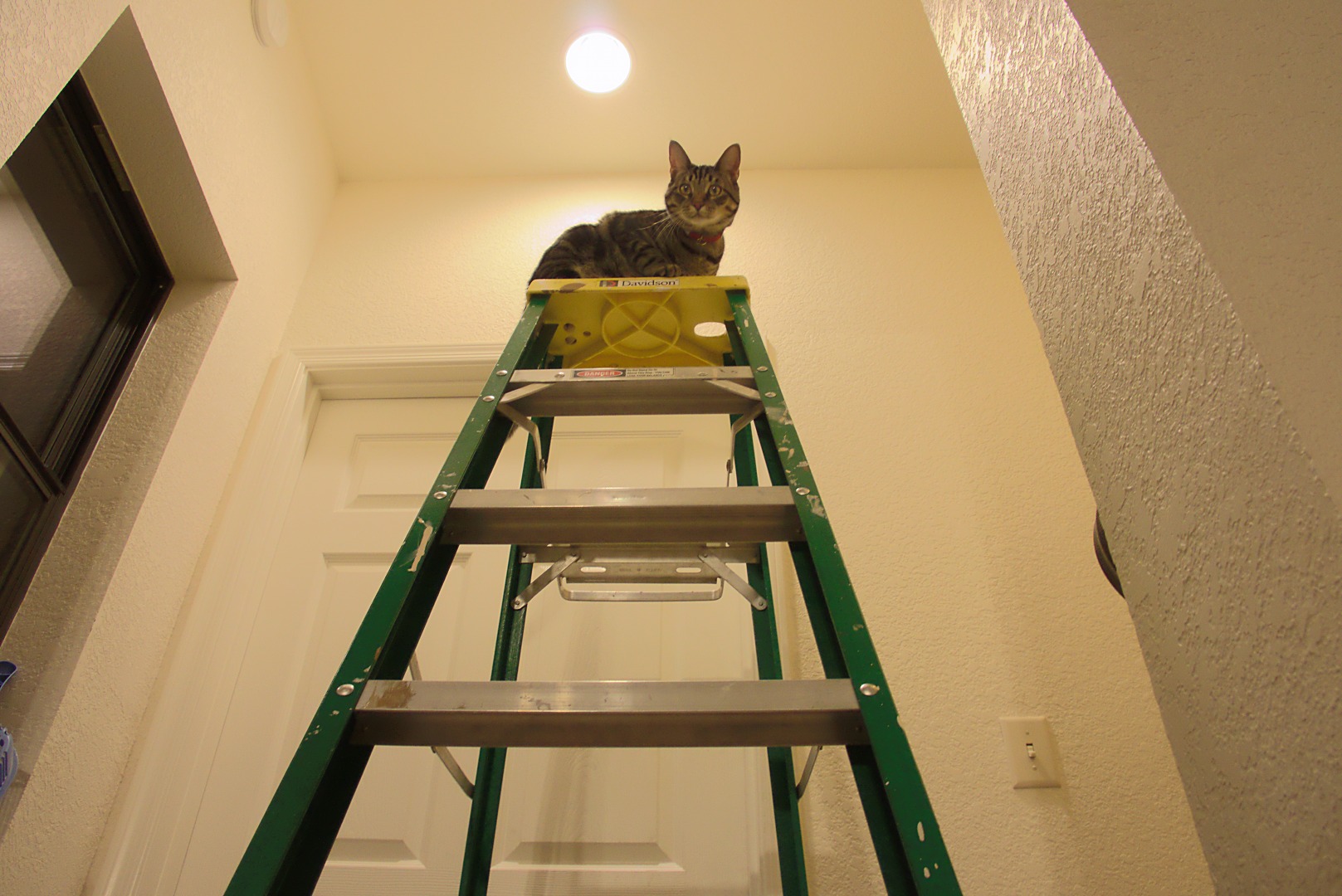 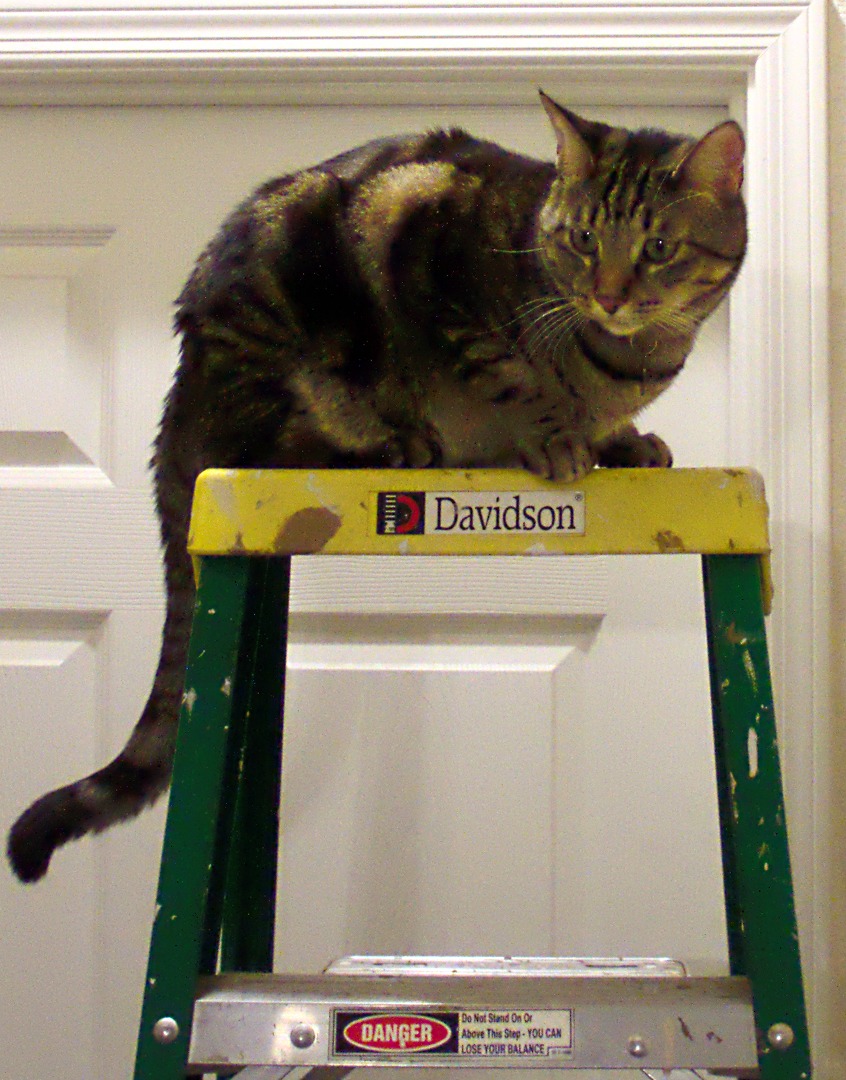 This isn’t a tutorial so much as it notes for myself regarding some of my recent experimentation in GIMP.  The resulting images are garish, but I find them oddly compelling.

Here is a crop of a photo that I took from my driveway.  The original photo was 6000×4000 pixels.  I performed the various operations described below on the full size image.  Only later, after I saw what the image looked like after doing various manipulations, did I crop it to 1600×1080.  It is a kind of blah photo.  Aside from the crop, I performed no other manipulations on this image.  I should note, however, that it was one of the HDR images produced by my NEX-7. 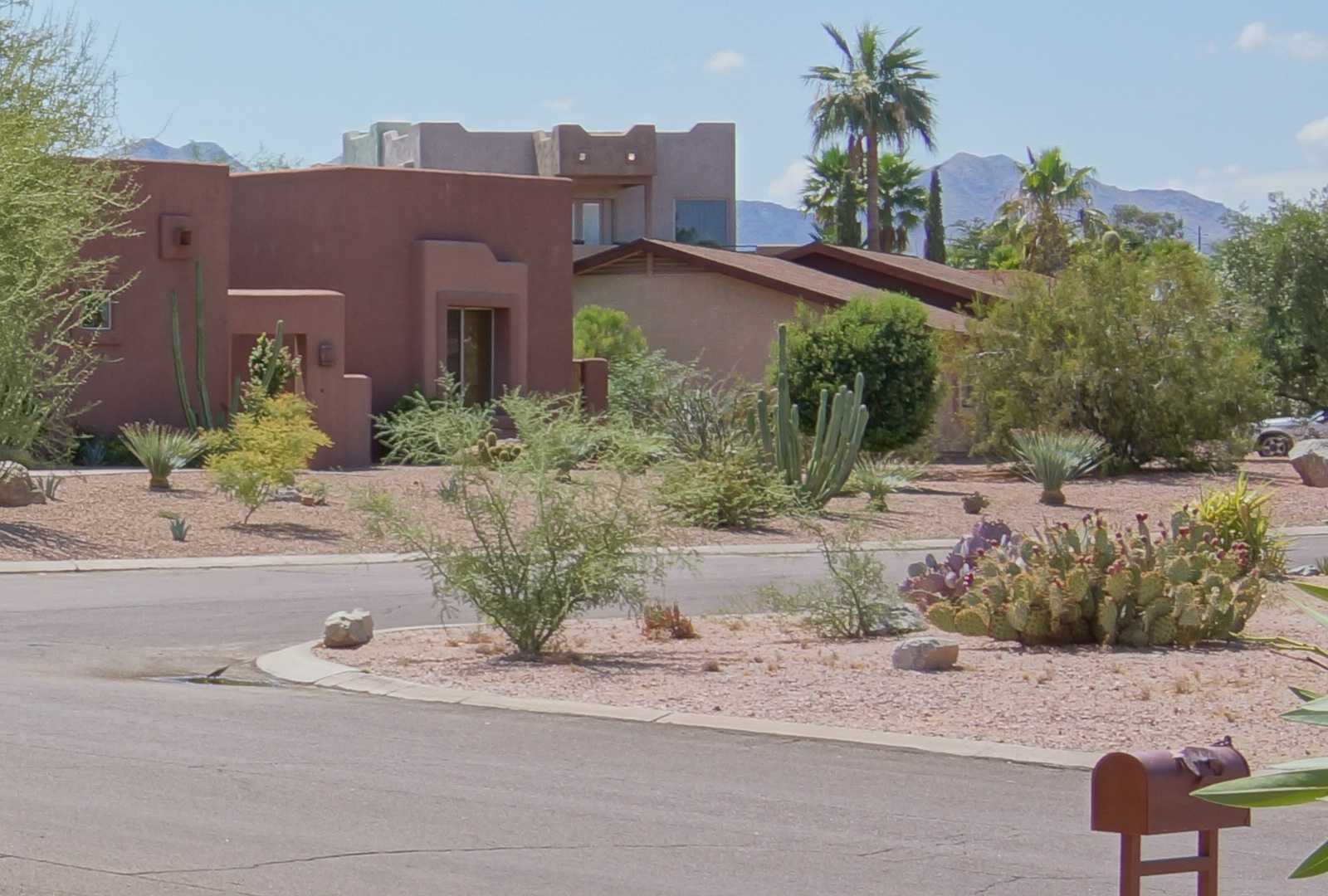 Next, I performed one round of Gaussian Blur, Grain Extract, and Grain Merge on the photo.  I used a blur radius of 50 because I noticed that I was getting a large halo around trees and along the skyline when I used large values.  I still need to do more experimentation to find an optimal value.  Alternately, it may be possible to mask the problem areas to avoid this issue.  Here is the result: 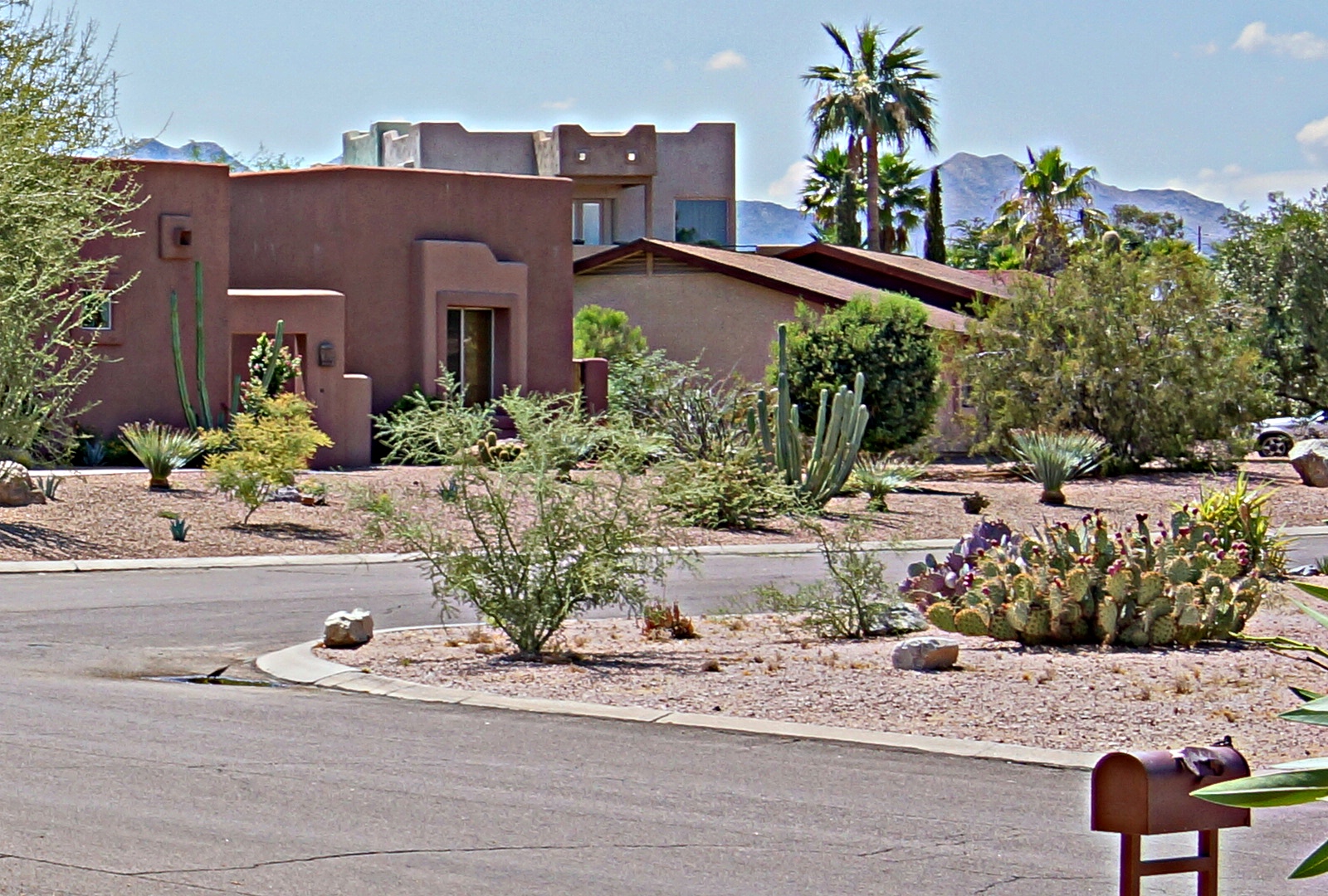 In Easy Overprocessing with c2g, I found about GIMP’s c2g filter.  I’ve tried the techniques described on that page, but haven’t yet gotten similar results.  It may be that I’m missing a step.  Another interesting article about c2g is How to Make Stylish Black & White Digital Photos with the GIMP.  I’ve skimmed it and it’s worthy of further study.  Another good article is Black and White Conversion with GEGL’s c2g (color2gray) in GIMP.  It provides some very, very helpful hints on how to best set some of c2g’s parameters.

The c2g operation converts a color image to grayscale, but the resulting grayscale image can be much more striking than just using Colors->Desaturate… In GIMP 2.6.11, the c2g operation is found under Tools->GEGL Operation…  From there, a dialog will pop up, at which point,you need to select c2g from the menu. Here is what the crop looks like after subjecting the entire 6000×4000 image to c2g with Radius=500, Samples=10, and Iterations=10. 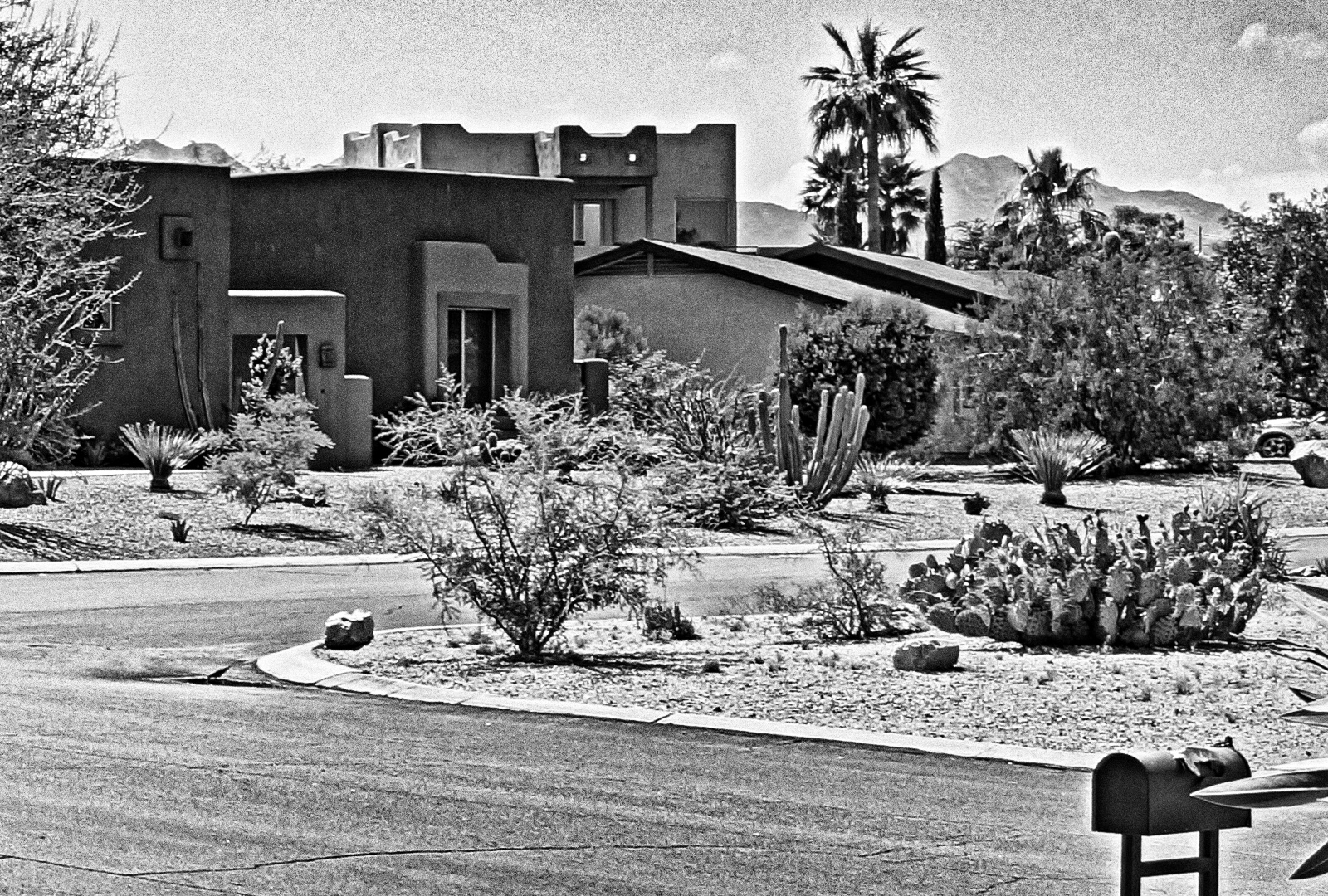 Here is what a desaturated image looks like using Colors->Desaturate…  I ended up using a portion of this image for the sky. 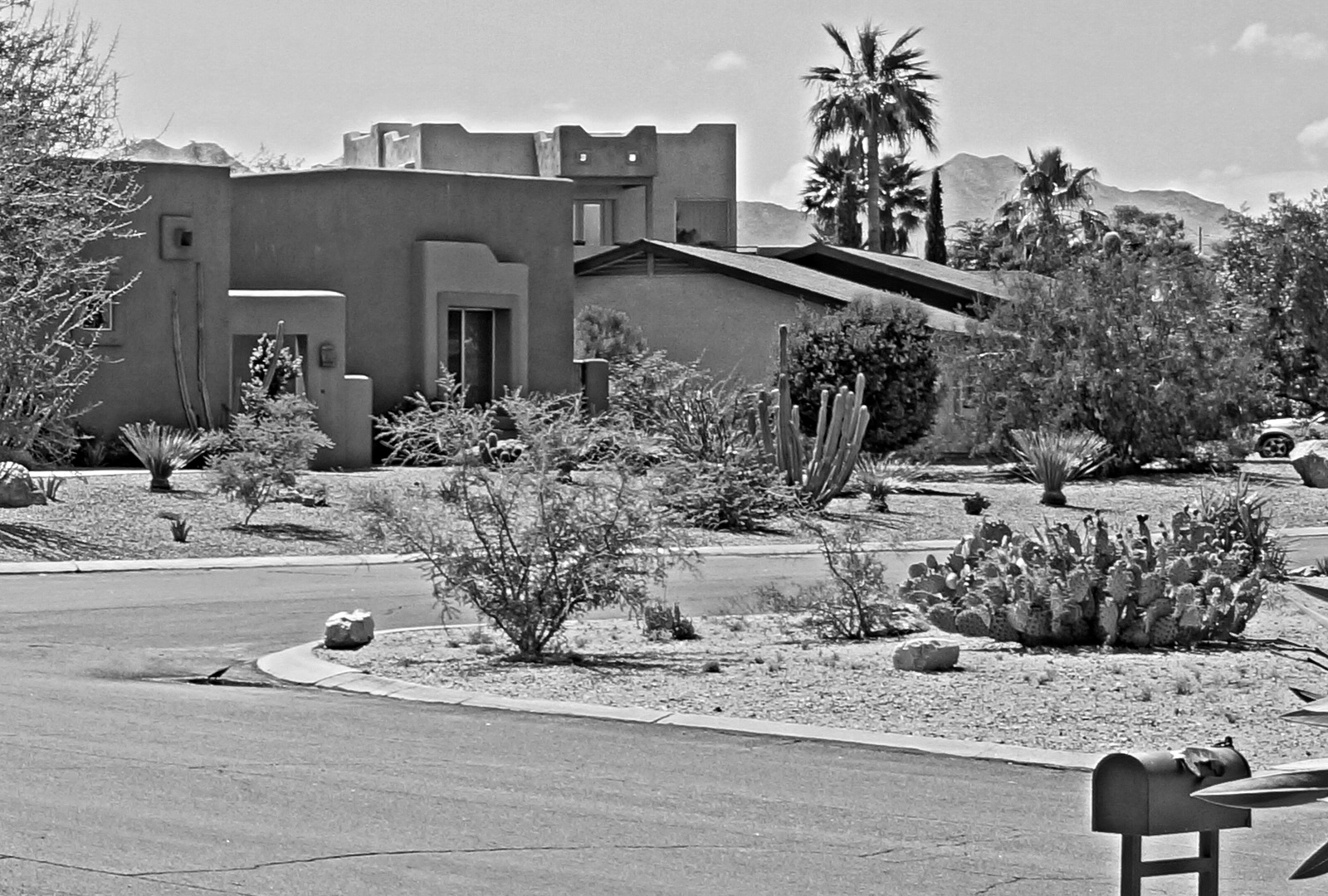 The c2g version appears to have more texture to it.  The sky, however, turned out to have too much texture for my taste, so I created the second version to use for the sky alone.  I applied a layer mask containing only the sky to that layer and an inverted mask to the c2g layer.  With the masks applied, I set the layer mode to Grain Extract for both of these layers.  Here’s what that ends up looking like: 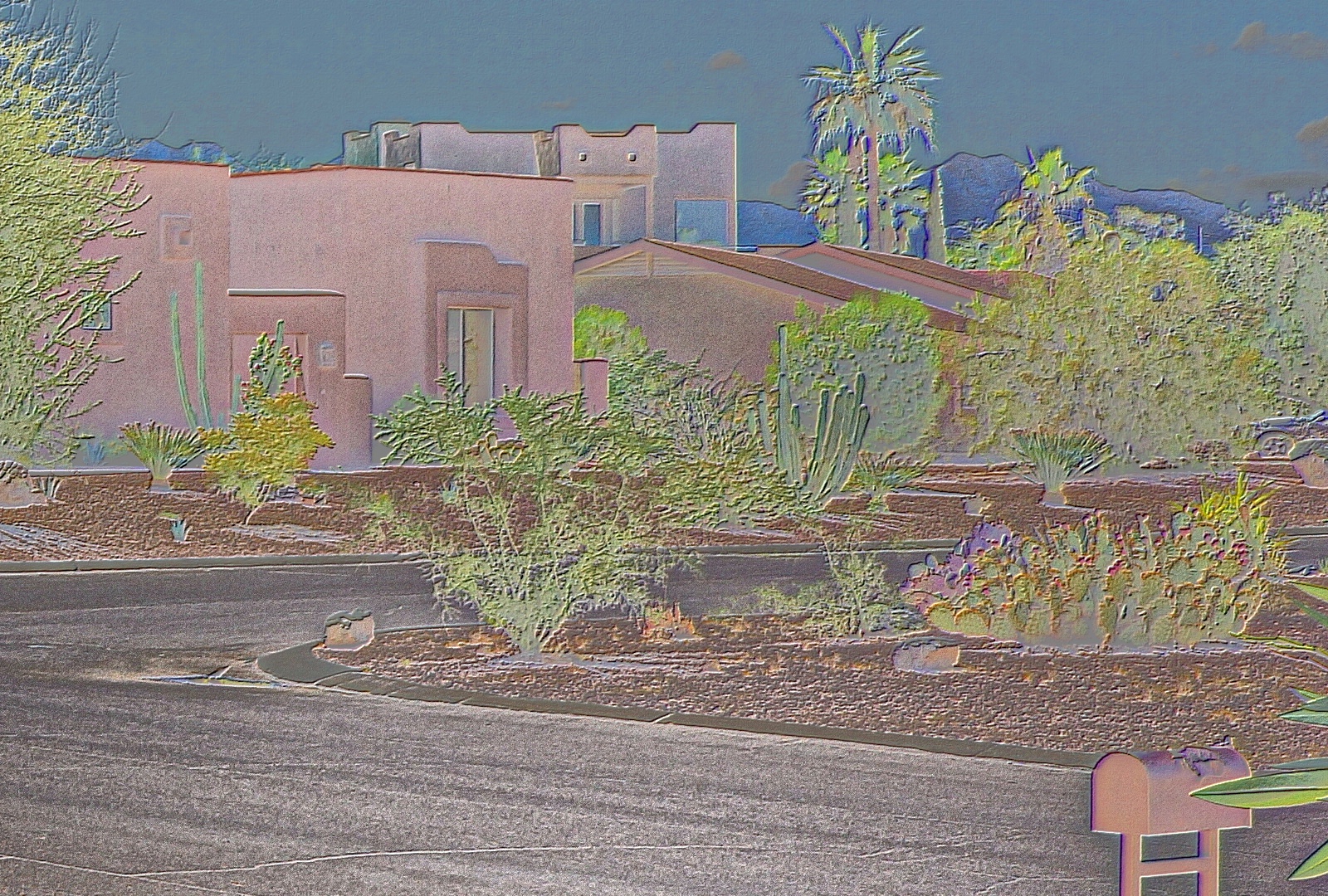 Note that the sky has a fairly smooth texture to it, but the buildings and even the street appear to have a significant amount of texture.

Next, I duplicated the blur-extract-merge layer that I started with, put it on top of the layer stack, and set its mode to Grain Merge.  Here’s the result with those four layers visible: 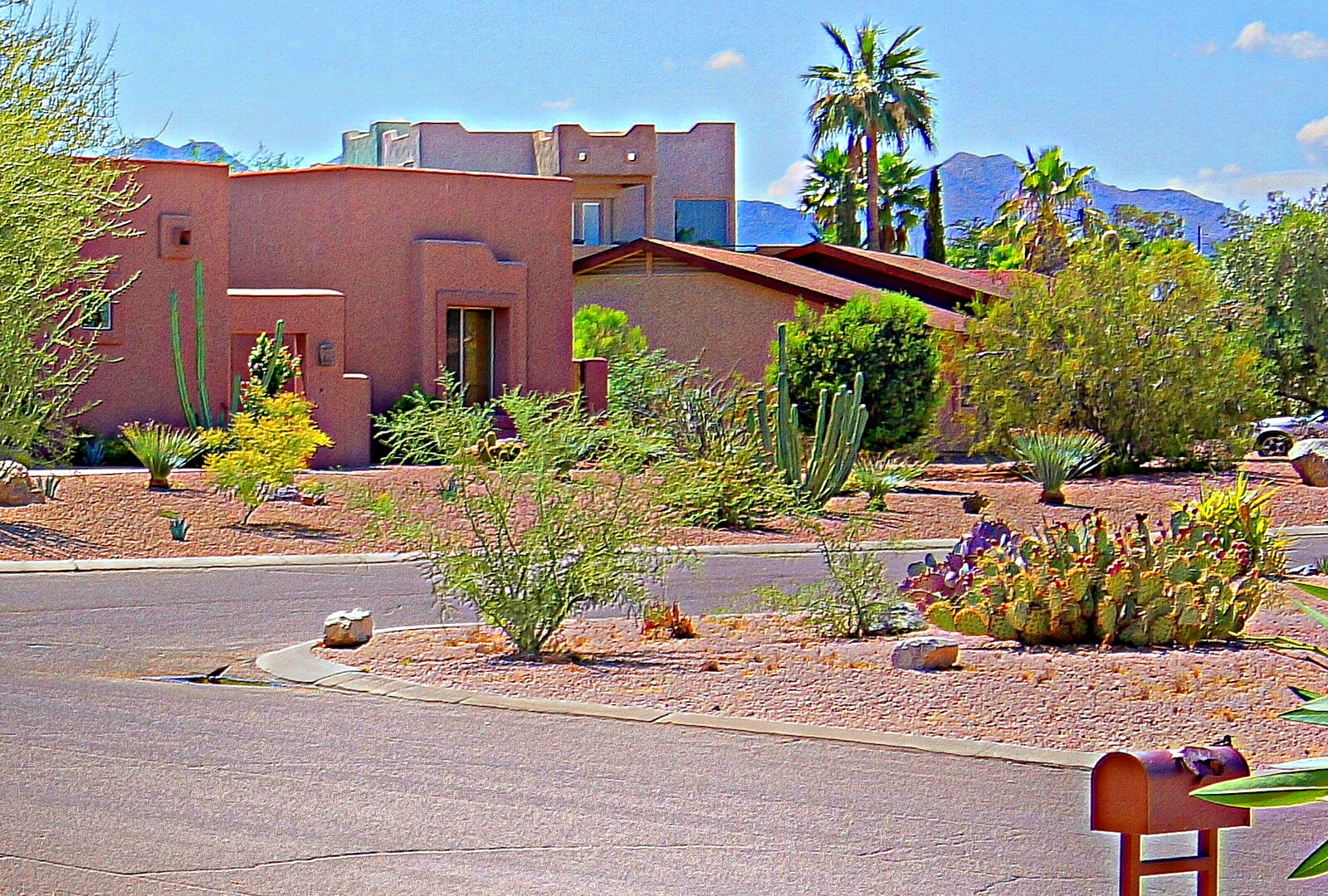 This might actually be a good place to stop, but I decided to see what it looks like by duplicating the two grain extract layers and the top-most grain merge layer and then placing those layers in the correct order on the top of the layer stack.  Here’s the result: 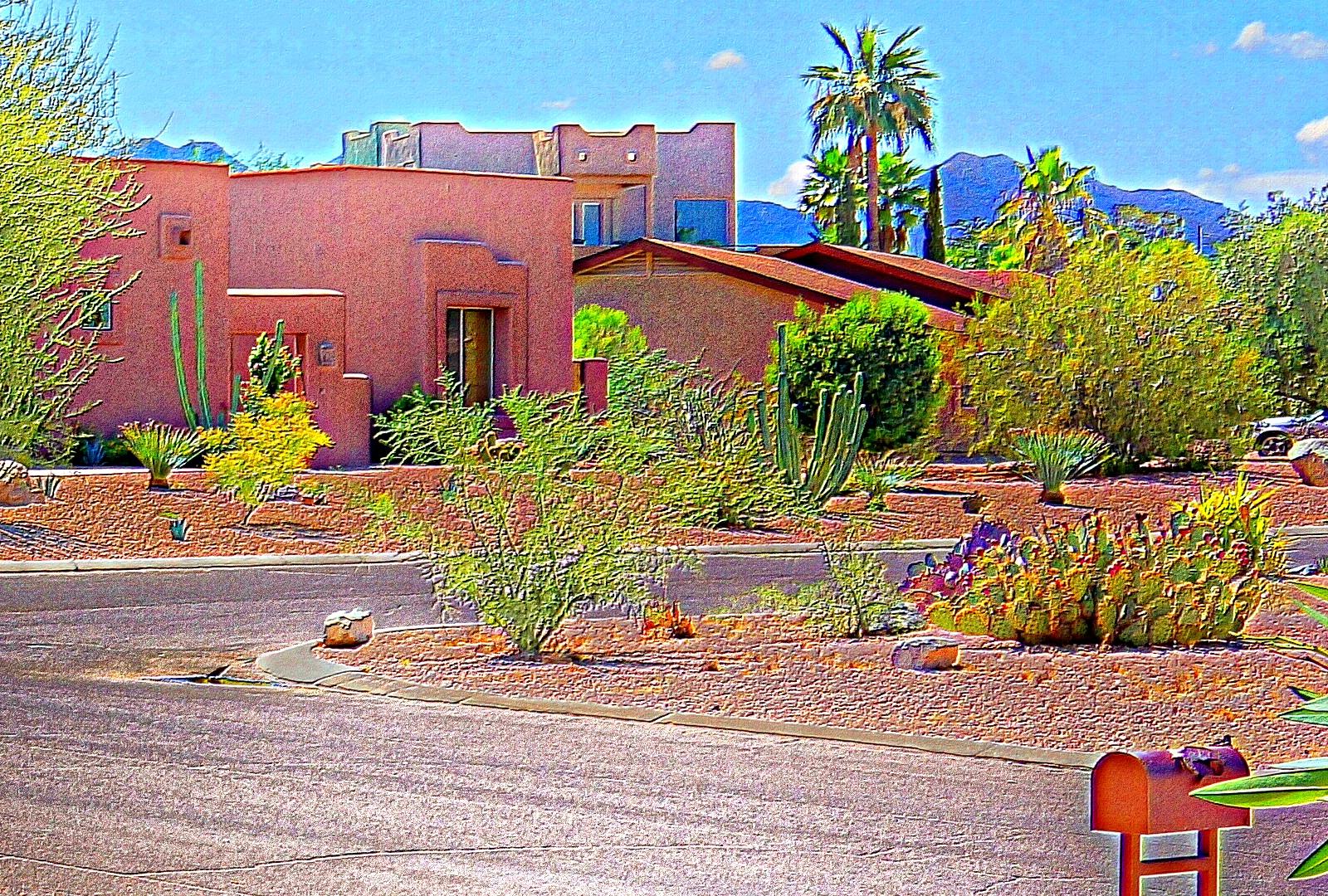 Performing another round of duplicating the grain extract and grain merge layers and placing them at the top of the stack produces this image: 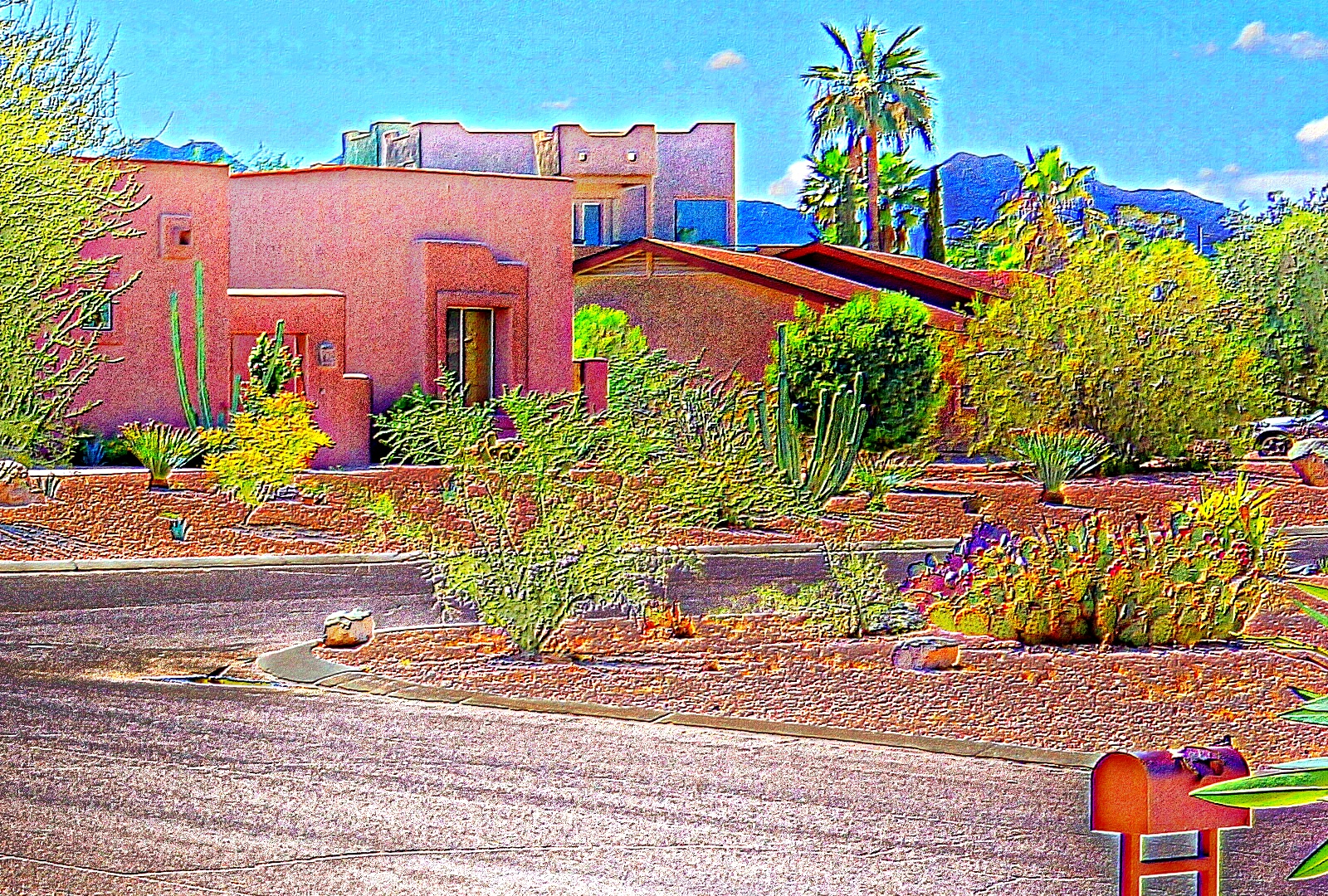 I wanted the sky to be a deeper blue, so I added a grain extract layer of the desaturated sky with the opacity set to 71%.   Here’s the GIMP layer window for the upcoming image: 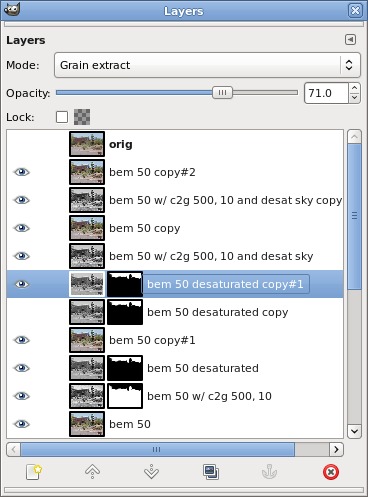 Below is the final image.  It may be that one of the earlier images is “better”, or maybe they’re all just awful.  I’m too close to it right now and probably need to look at the whole thing again in a few days.  It is interesting though to see the variety of contrasting colors obtained using this technique.  At no stage in the process, except for the last step where I fiddled with the sky color, did I actually choose any of those colors.  They just came out on their own by iterating grain extract / merge operations on the grayscale image produced by c2g. 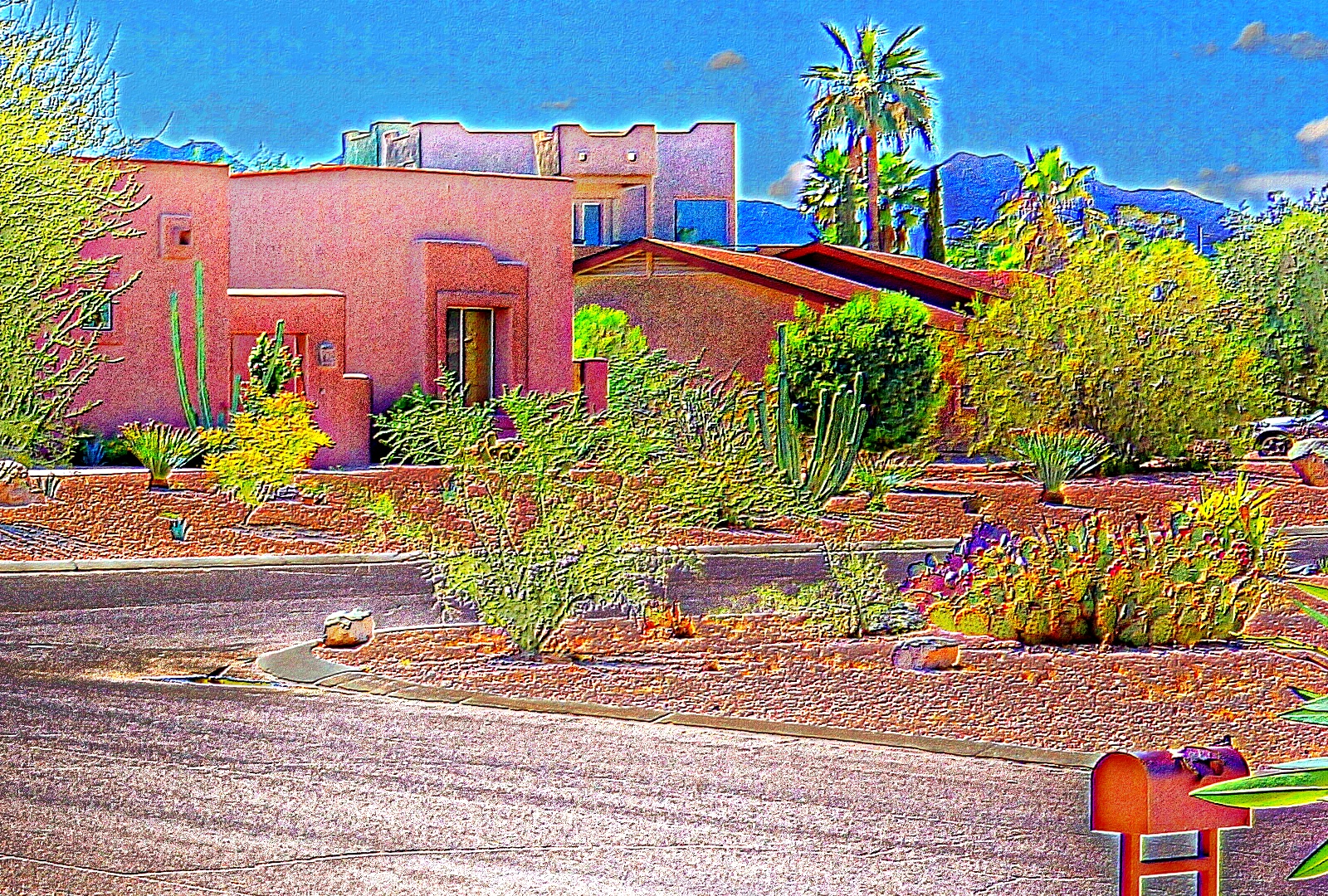 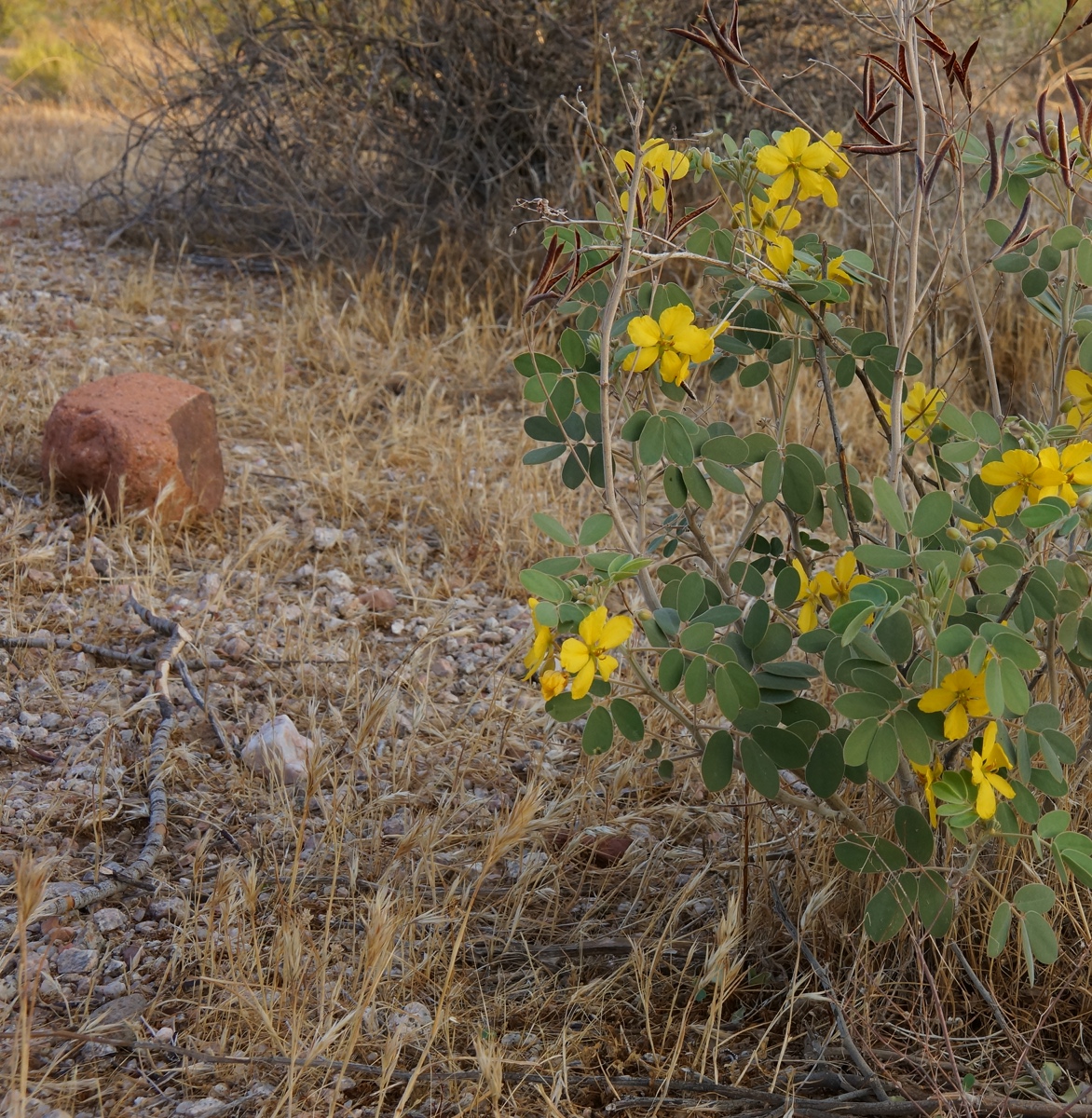 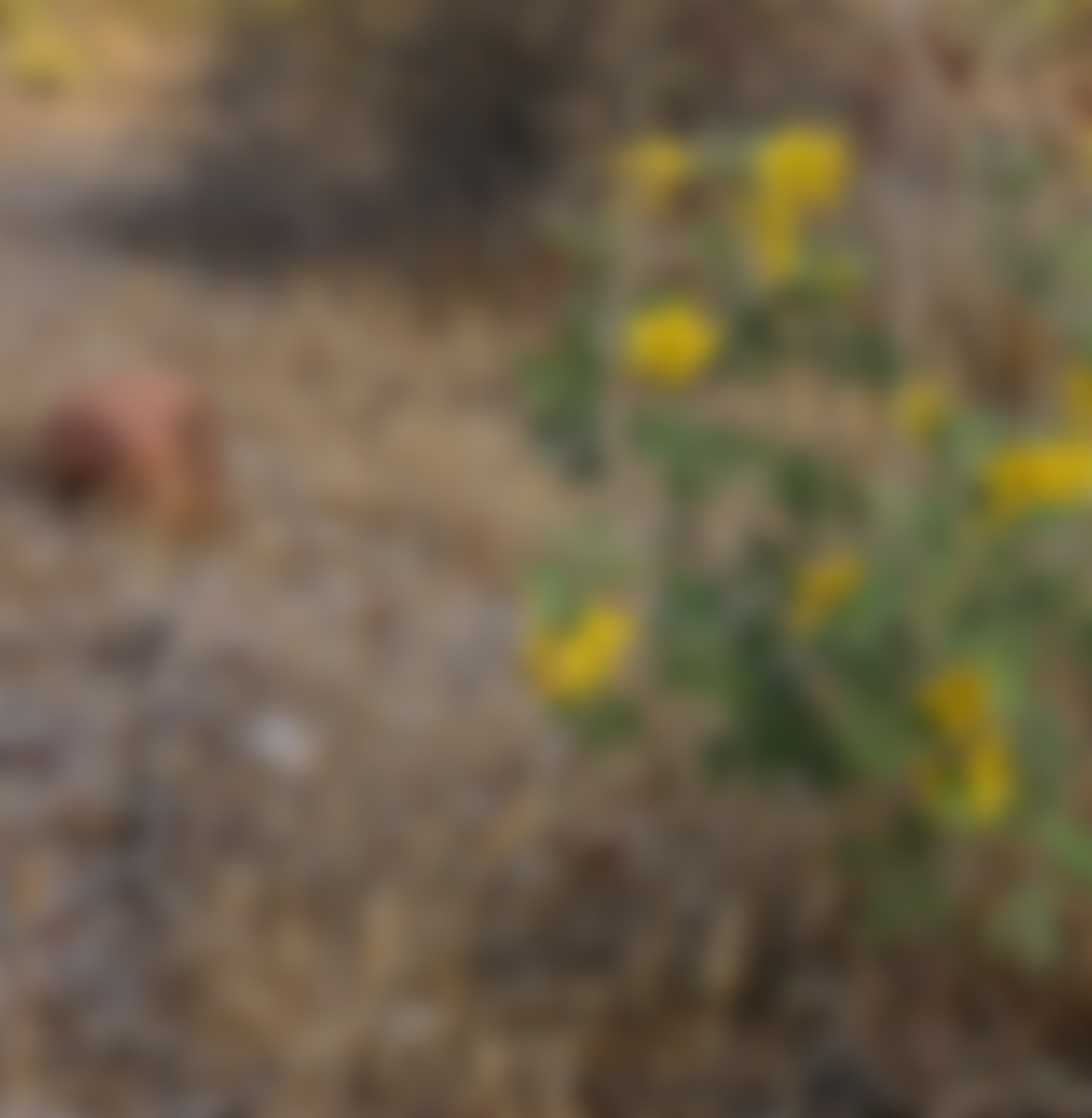 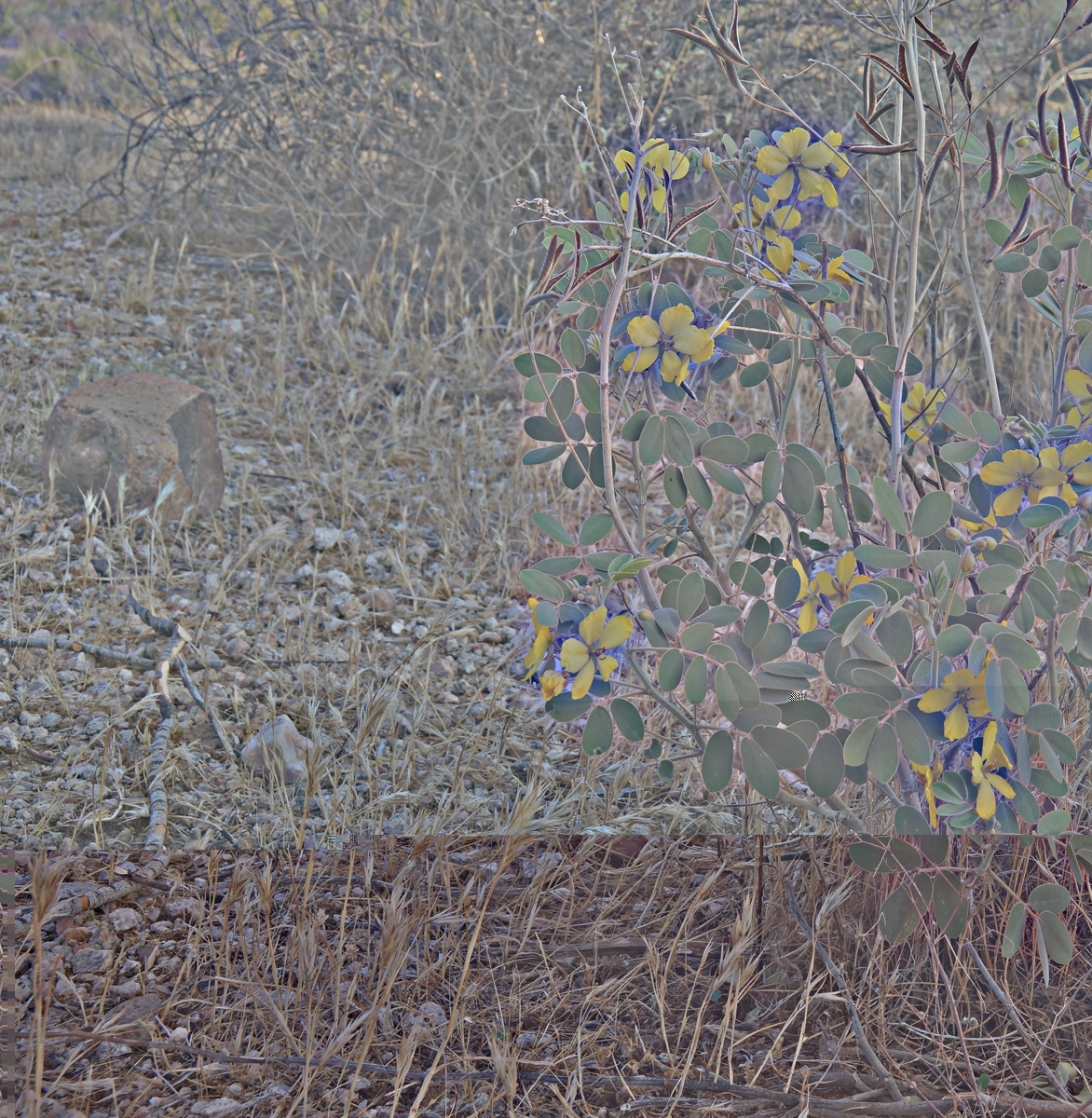 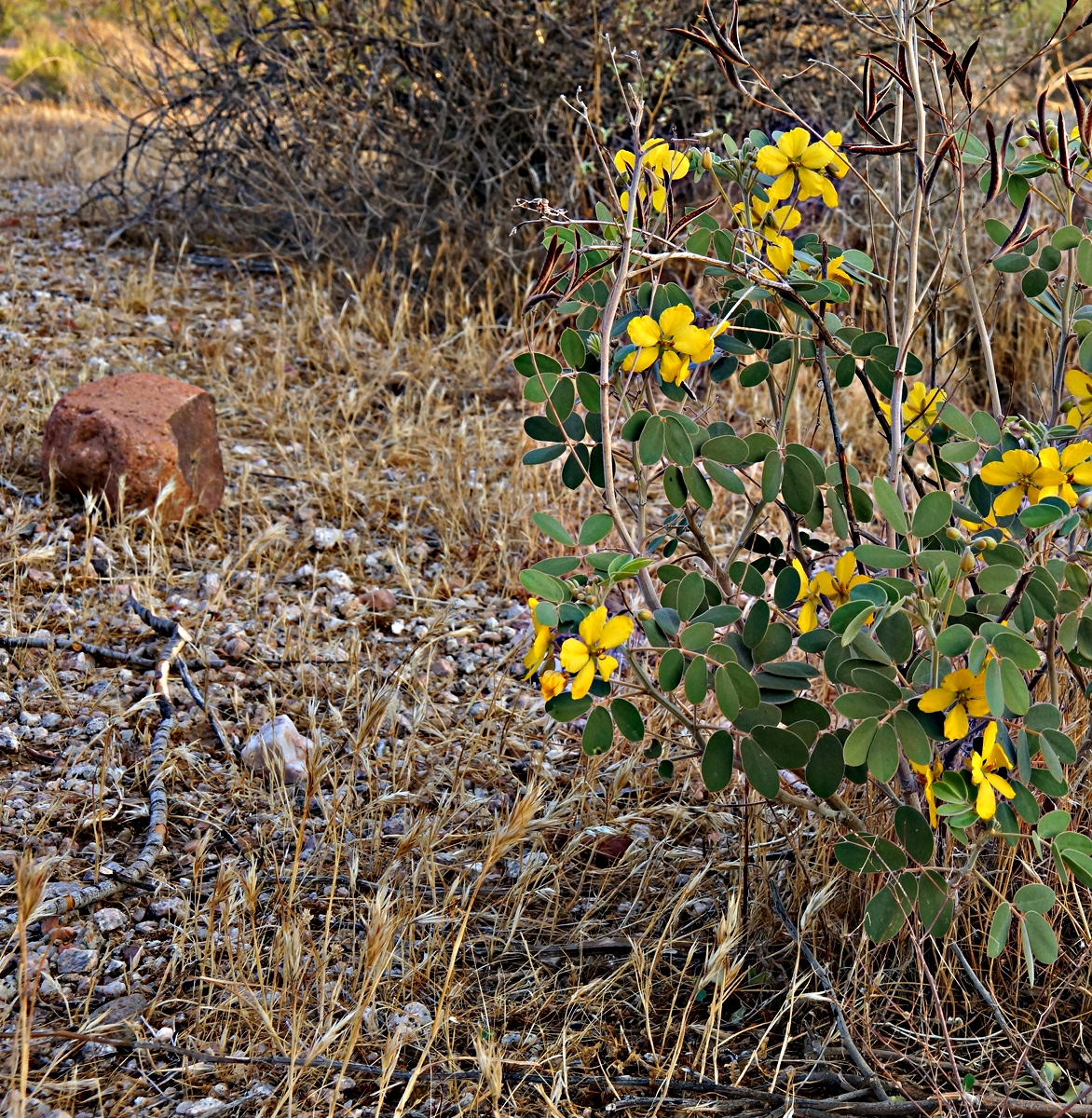 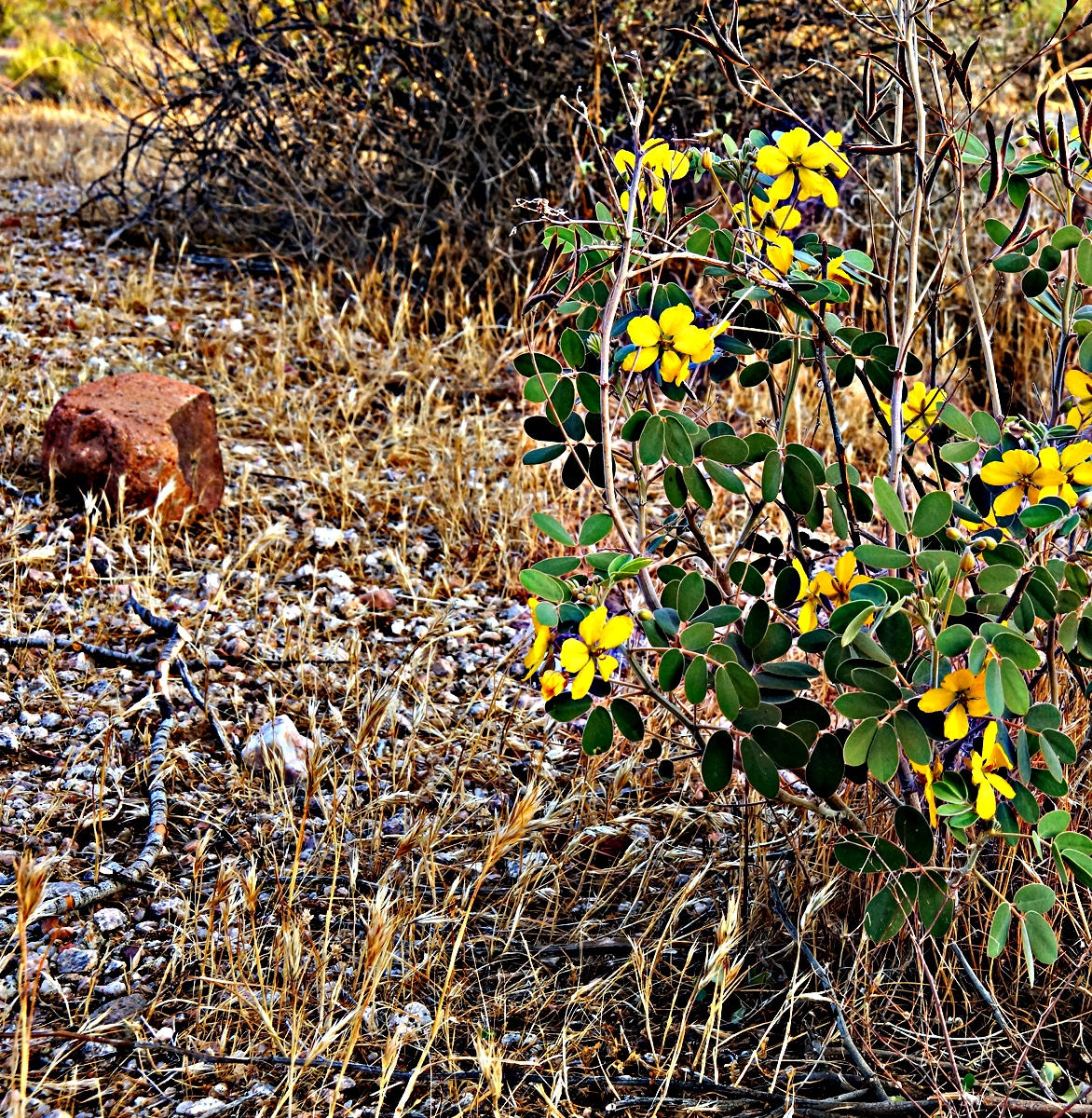