While coming back in from feeding Minstrel today, I noticed that the Bird of Paradise plant is flowering in our backyard.  Here’s a photo: 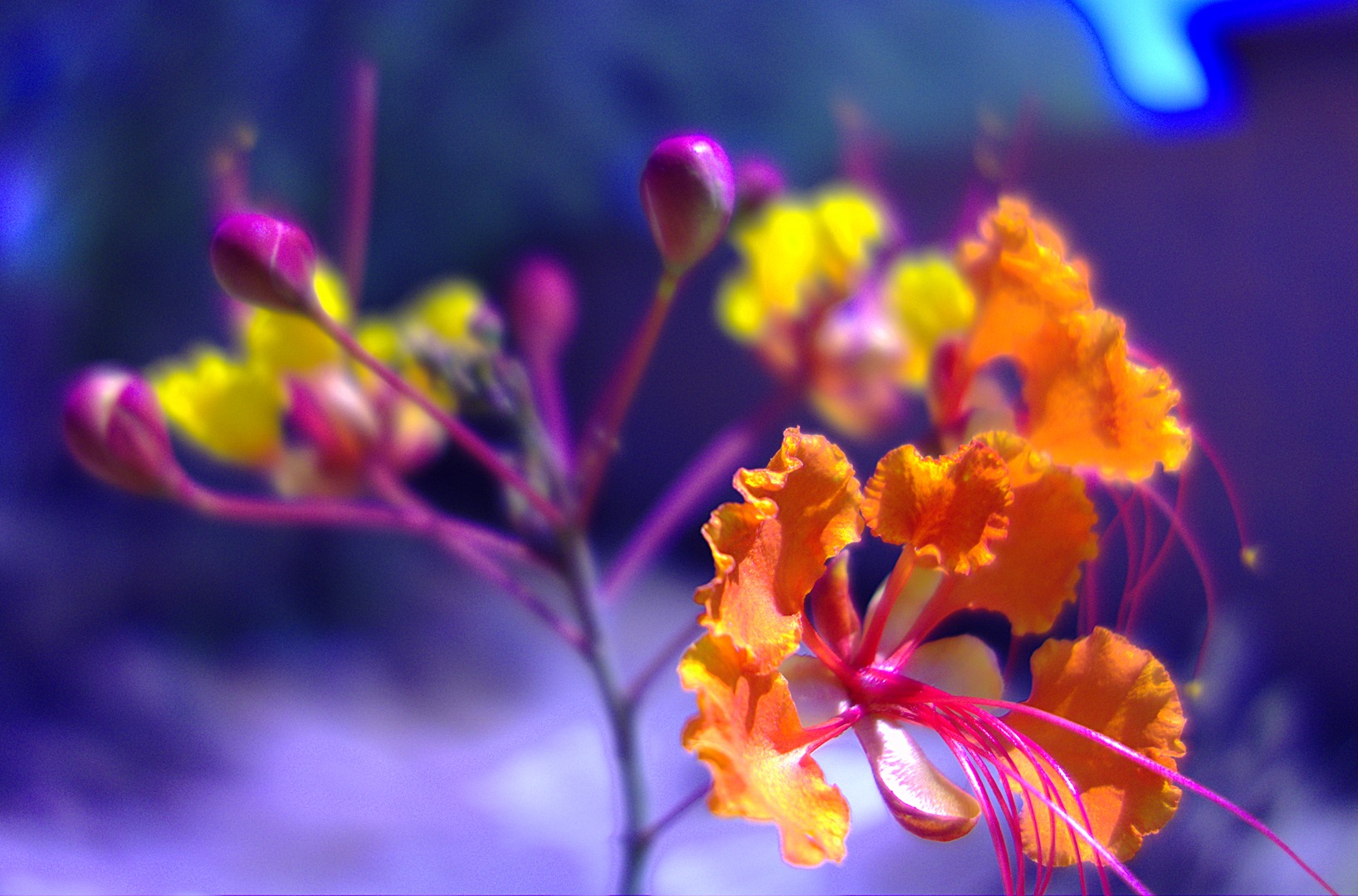 The raw file from my RX100 was processed by UFRAW.  The only edits I did in GIMP were to sharpen it, crop it (slightly), and resize it for posting here.

Here’s a crop showing the detail for the flower that’s most in focus. 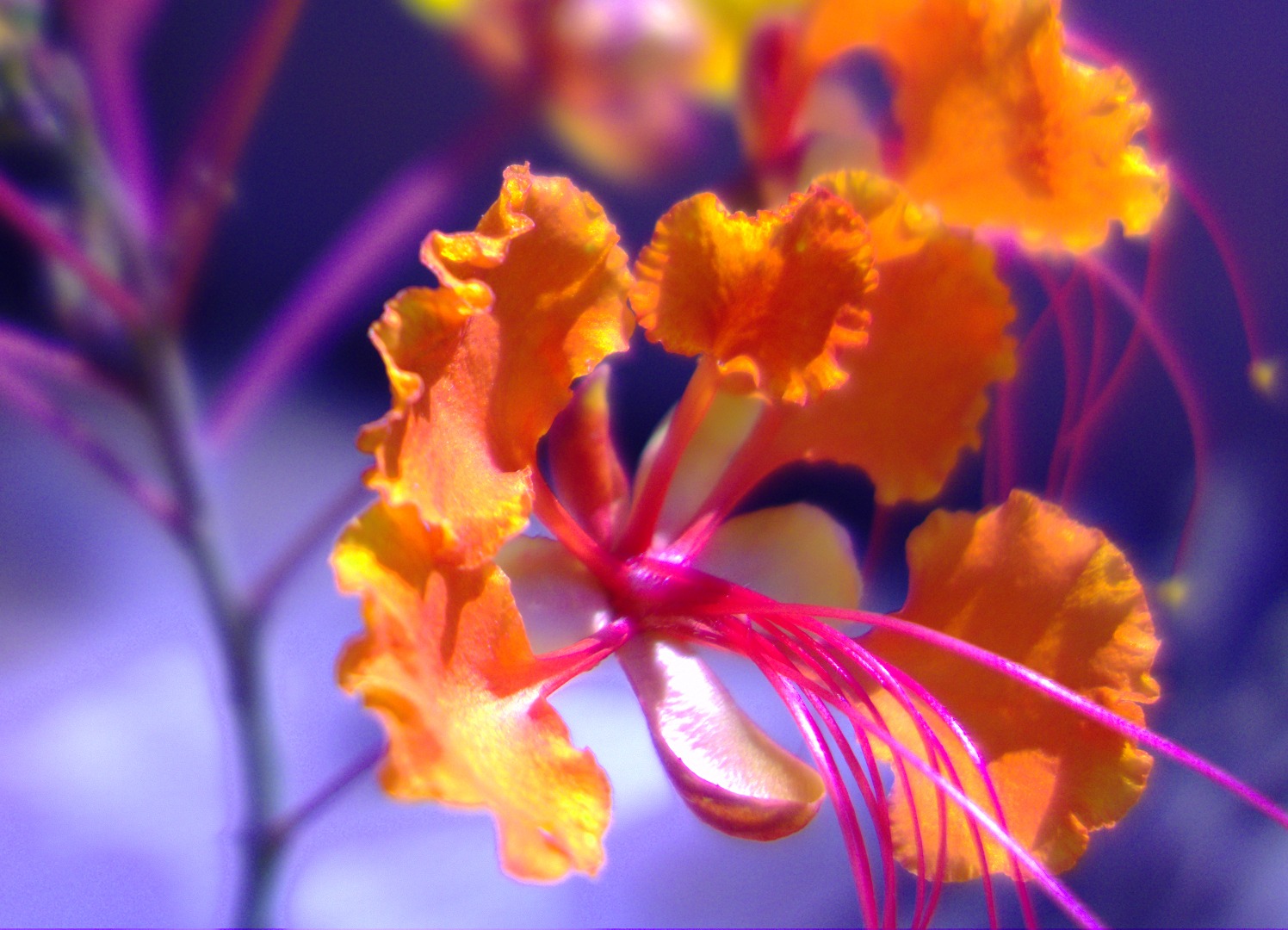 In going through the images later on, I noticed one with a moth that I thought was interesting. 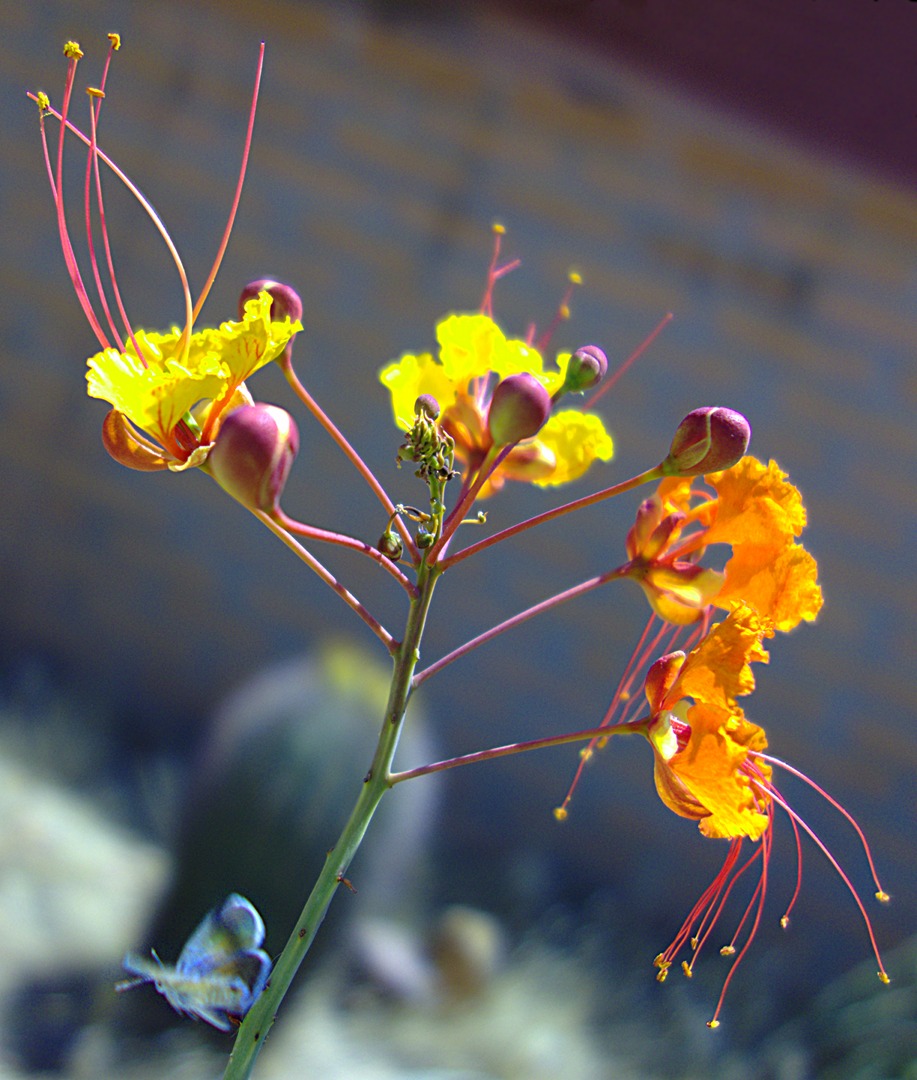 I set up the tripod today to make sure that the new PalmGrip that I put on my NEX-7 would work with the clamp on our tripod.  (It does.)  I got this photo of Freckles during my testing.

One gripe that I have about the NEX-7 – and I do think that it’s an NEX-7 problem and not a problem with the tripod plates that I’ve tried – is that it sags a bit after adjusting the tripod ball head.  I believe that this is due to flex between the mount plate and the body of the NEX-7.  I think it’s less of a problem when you use a shorter and/or lighter weight lens or use a lens with its own mount plate.

So, for example, when focusing on Freckles, I had to frame the shot slightly higher than what I see in the viewfinder because as soon as I take my hands off the camera, the weight of the lens will pull it down somewhat.

This does not happen with Marilyn’s A77.

In the photo below, Freckles is watching one of Marie’s shoes that I’m waving around above my head. 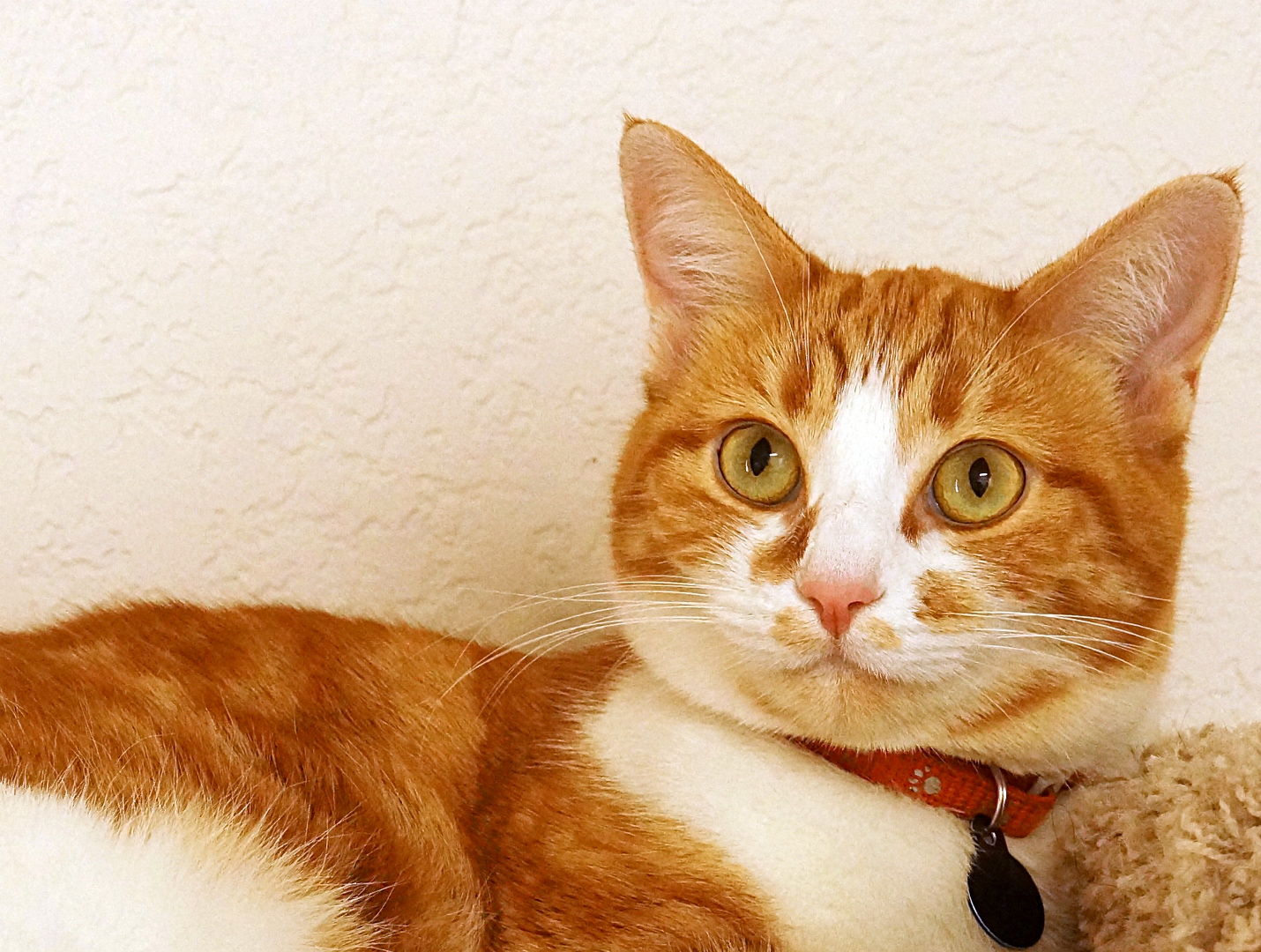 My Sony NEX-7 does in-camera HDR.  I used this feature extensively while taking photos during my recent vacation.

HDR stands for High Dynamic Range.  HDR photos are intended to show you portions of the scene that might not otherwise be easily visible when photographed with just a single exposure.  The way it normally works is that several – usually three or more – exposures are taken of a scene, usually using a tripod.  The exposure settings are changed each time so that portions of the scene that aren’t well lit in one exposure will, hopefully, be better lit in some other one.  The photographer then takes these various exposures and edits them together to make a single photo that better shows the scene.  Software exists which helps with this process.  I haven’t used any of this software, so I can’t say how well it works nor how easy it is to use.

On many of Sony’s recent camera offerings, you can put the camera in HDR mode.  When in this mode, a single press of the shutter release button causes three exposures to be made – i.e. three different shots will be taken at differing metering levels.  The camera saves the middle exposure unaltered to the flash card, then goes to work on processing the three photos it took into one single photo which may or may not be “better” than the shot taken using the middle exposure.  This middle exposure is what the camera would have recorded had you simply taken the photo in some other (non-HDR) mode.

You can, if you wish, tell the camera how to bracket the shots.  I tried this on my first day of using it, but some of the results were quite horrible, so I put it into auto-HDR bracketing for the remainder of my shots.

Even so, some of the HDR shots in auto-HDR mode aren’t that good; many times I like the non-HDR version better and am glad that the camera recorded that version.

Other times, I can see only minor differences between the HDR version of the photo and the non-HDR version.  It can provide good results, however, when there are areas of shade or shadow in the scene.  This happened quite frequently when taking photos of arches and fins in the Moab area.

Here is a non-HDR exposure taken at the Grand Viewpoint in the Island in the Sky district of Canyonlands National Park.  Note that the foreground is difficult to see because it’s quite underexposed. 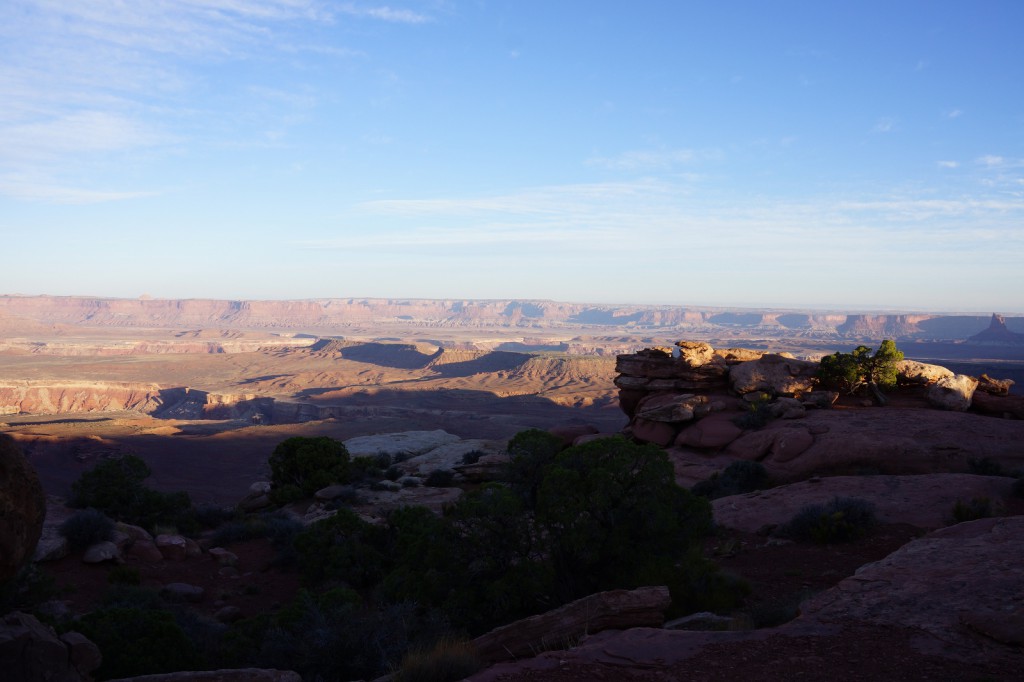 Here is the HDR version that the camera composed of the same scene.  No editing of my own, aside from scaling, has been performed on either this photo or the one above.  Note that it is now possible to see some details of the foliage in the foreground.  I should note too that I did not use a tripod for this shot.  I tried to hold the camera as steady as possible.  Even so, there’s some camera movement.  Sony’s HDR in-camera HDR processing somehow manages to correct for small movements of the camera between exposures. 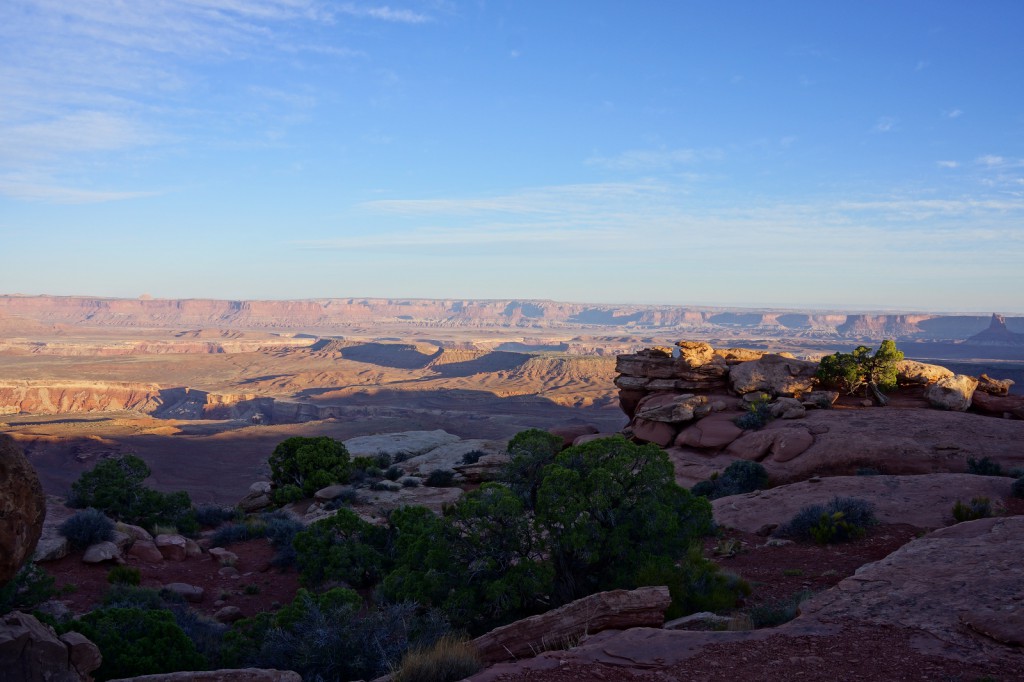 Finally, here is an edit that I did of that last photo.  I made the foreground somewhat easier to see while still conveying the fact that it’s in the shade.