Marilyn and I had a canyoneering adventure in Minnow Canyon on Thursday, the 19th.

The route is only 2.4 miles in length, but has some bushwhacking, down-climbing, and one rappel.  There were several spots where we lacked the skill and nerve to do the down climb. In those spots, I rigged a rappel, usually no more than 20 to 30 feet, so we could get past that point safely.

The long rappel near the end was a lot of fun. It was about 130 feet in length and an overhung section near the end, in which you can no longer touch the rock with either your hands or feet.  There’s a large boulder which can be used for an anchor at this point. There were already two slings in place, one of which still felt supple enough that I was willing to trust it.  I rerouted the second (and presumably older) one a bit so that they were equalized.  The one problem that I saw with the way that the anchor was rigged was that rapid links (rappel rings, though which you pass the rope) were set back too far from the edge.  Setting it up this way makes it easier and perhaps safer to get over the edge, but it creates a lot more friction when it comes time to pull the rope.  That proved to be the case; I had to pull very hard on the pull cord to get it to move.

It was dark when we got to Fish Creek, so we strapped on our headlamps so that we could finish the adventure.  There was water in the creek; I saw pools that appeared to be at least three feet deep.  I was able to find a way around these pools though.  The climb back to the road at the Fish Creek Bridge was challenging in the dark.

It turned out to be a 2.5 mile walk on the Apache Trail to get back to our vehicle. We left our headlamps on so that cars would see us.  It might have been safer doing this part in the dark because cars could definitely see us.

The hike starts on Forest Service Road 213. Hiking the road is easy, but there are still some pretty good views. 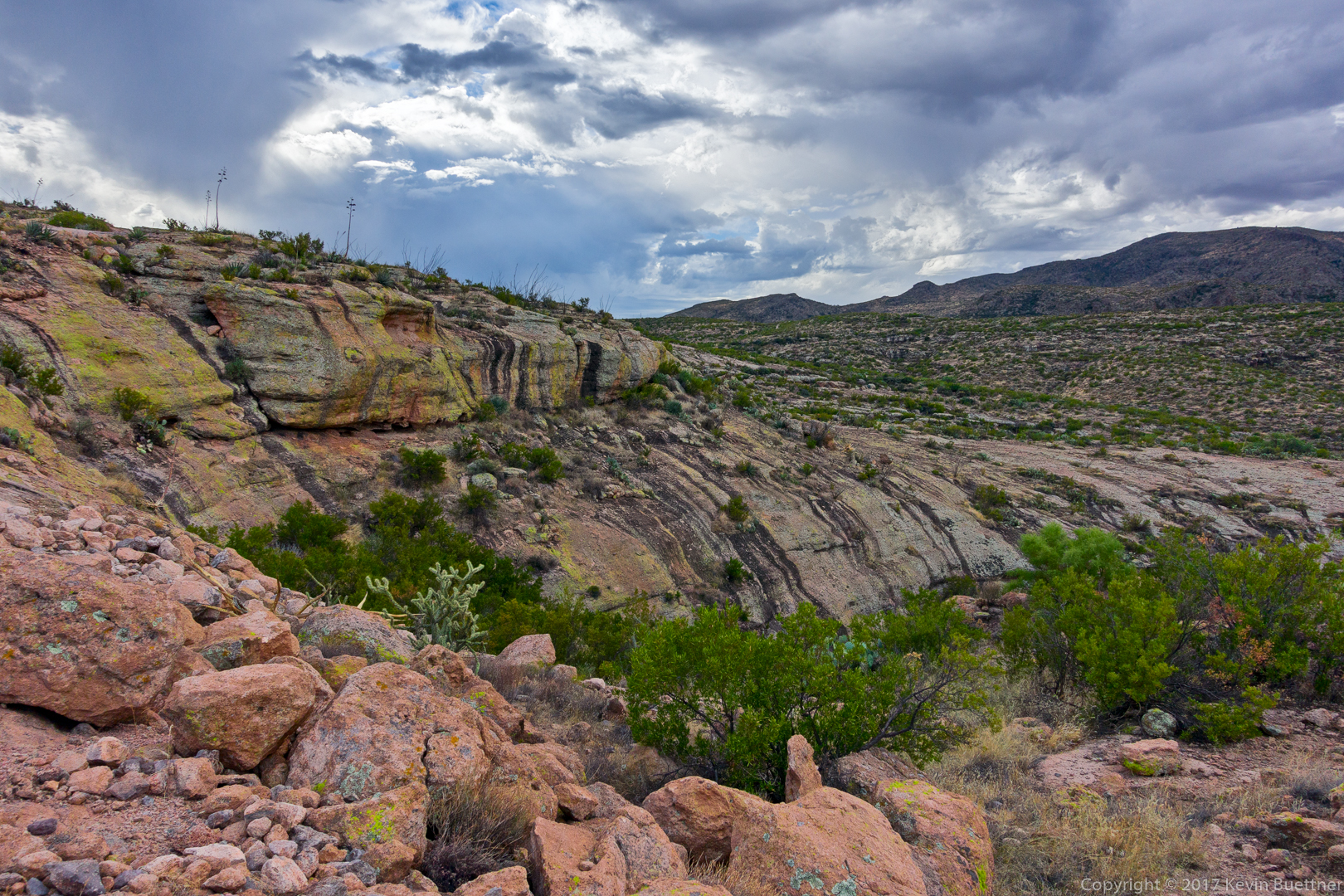 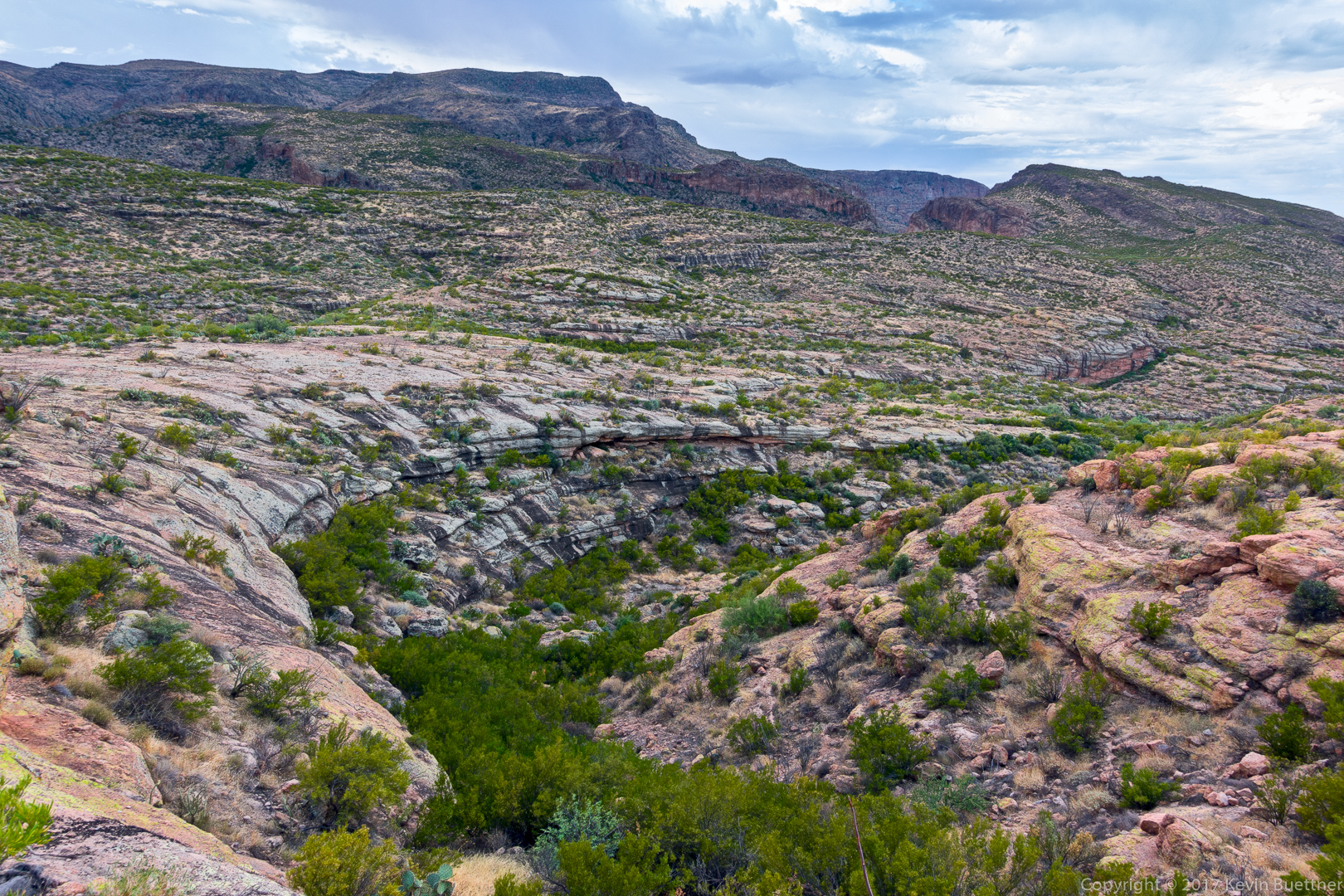 I left the road to photograph this view.  I got us lost for about half a mile while trying to get back to the road. 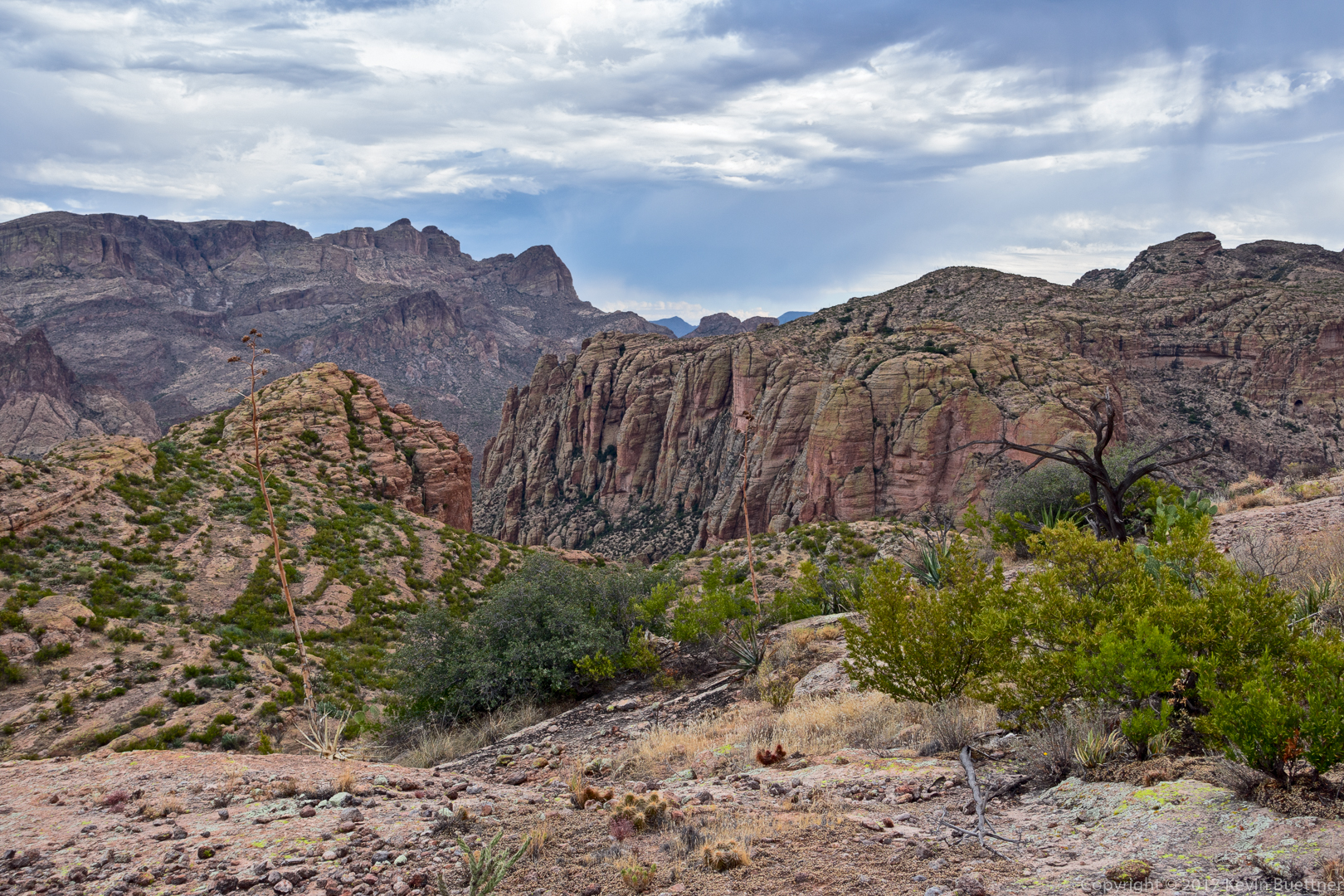 At this point, we had entered the wash which eventually led to Minnow Canyon. To get here, we had to descend a steep(ish) hill in the rain and then make our way through some catsclaw. I was happy that I chose to wear a long sleeve shirt and long pants. 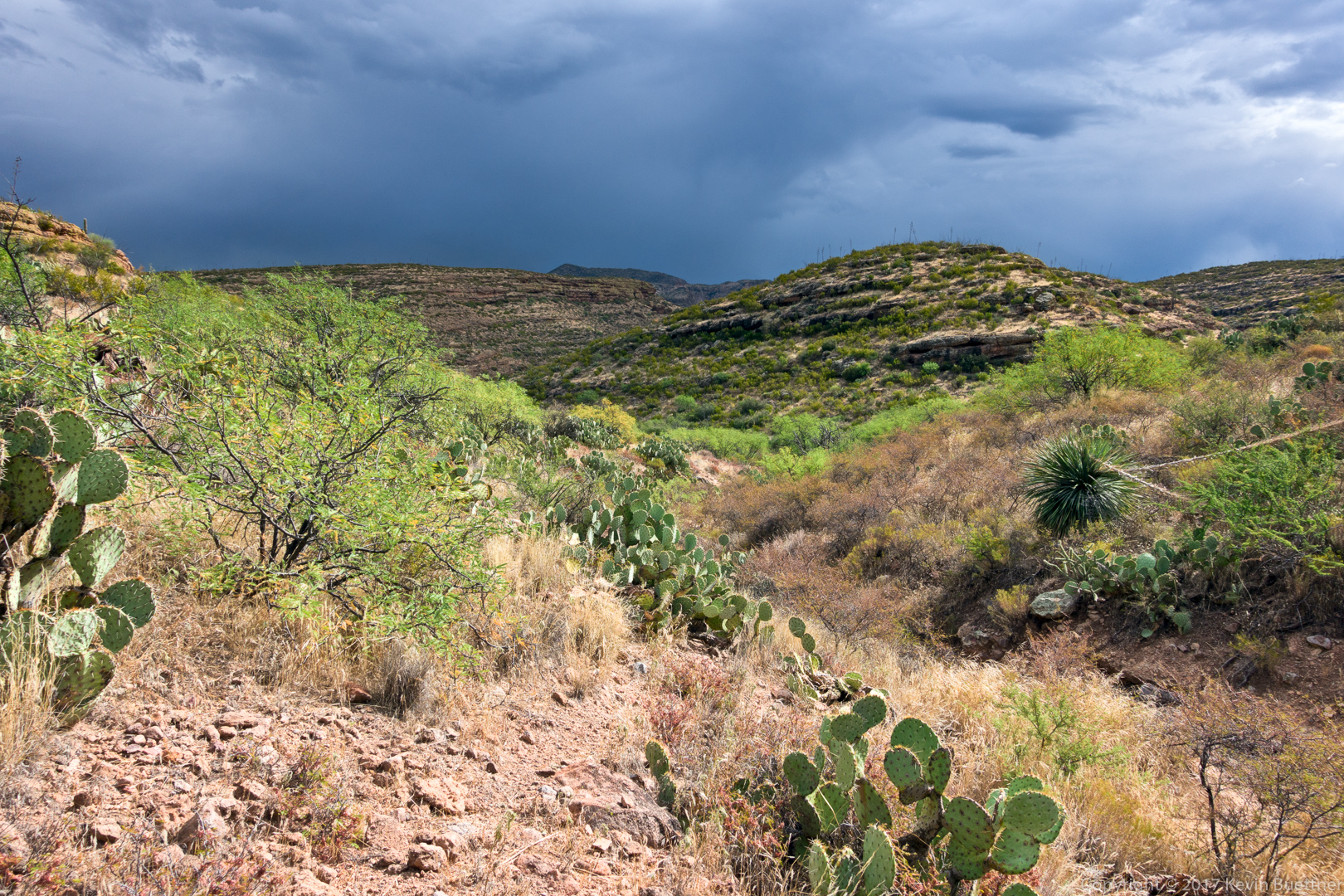 Bushwhacking was not over though… 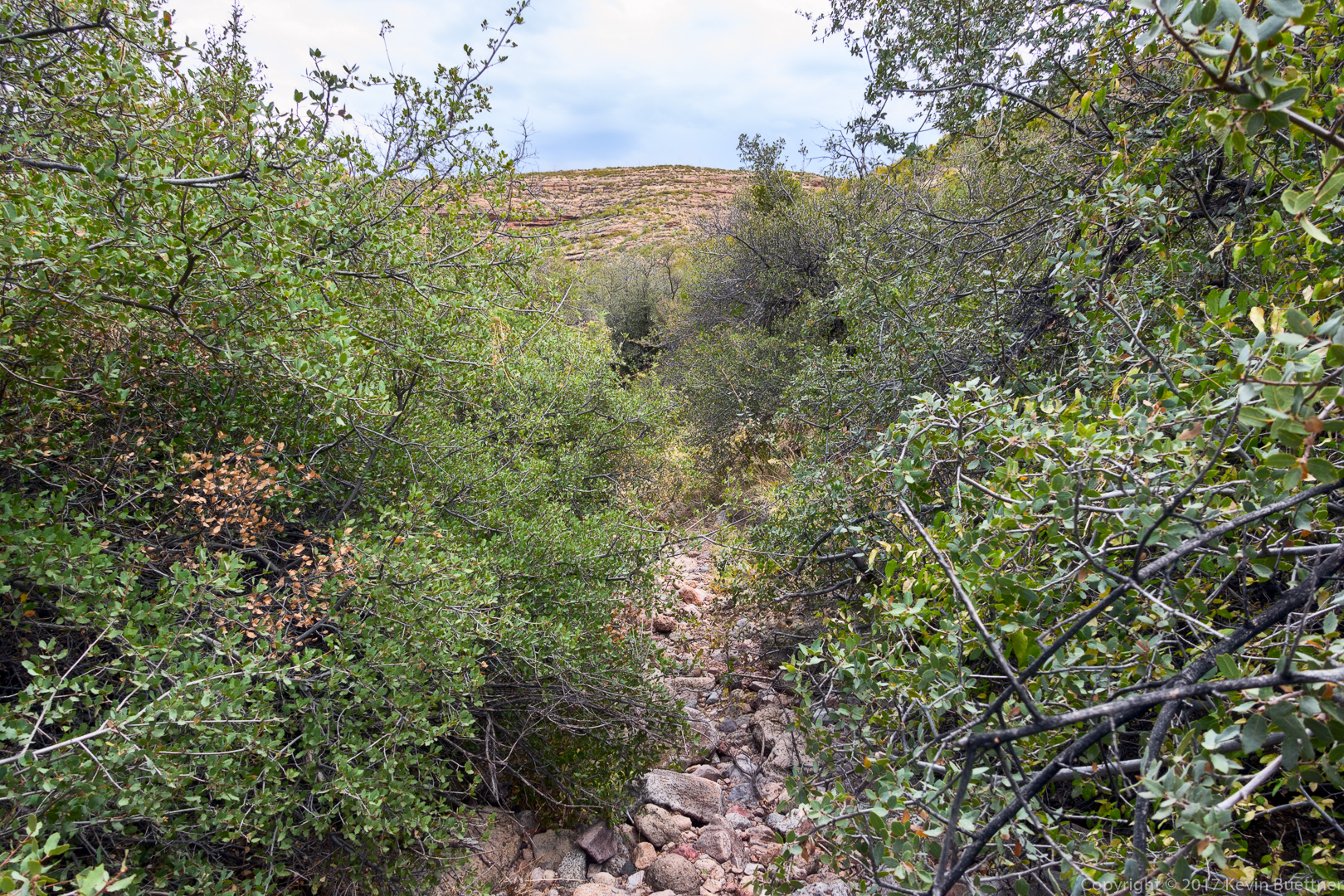 Making our way further down the wash… 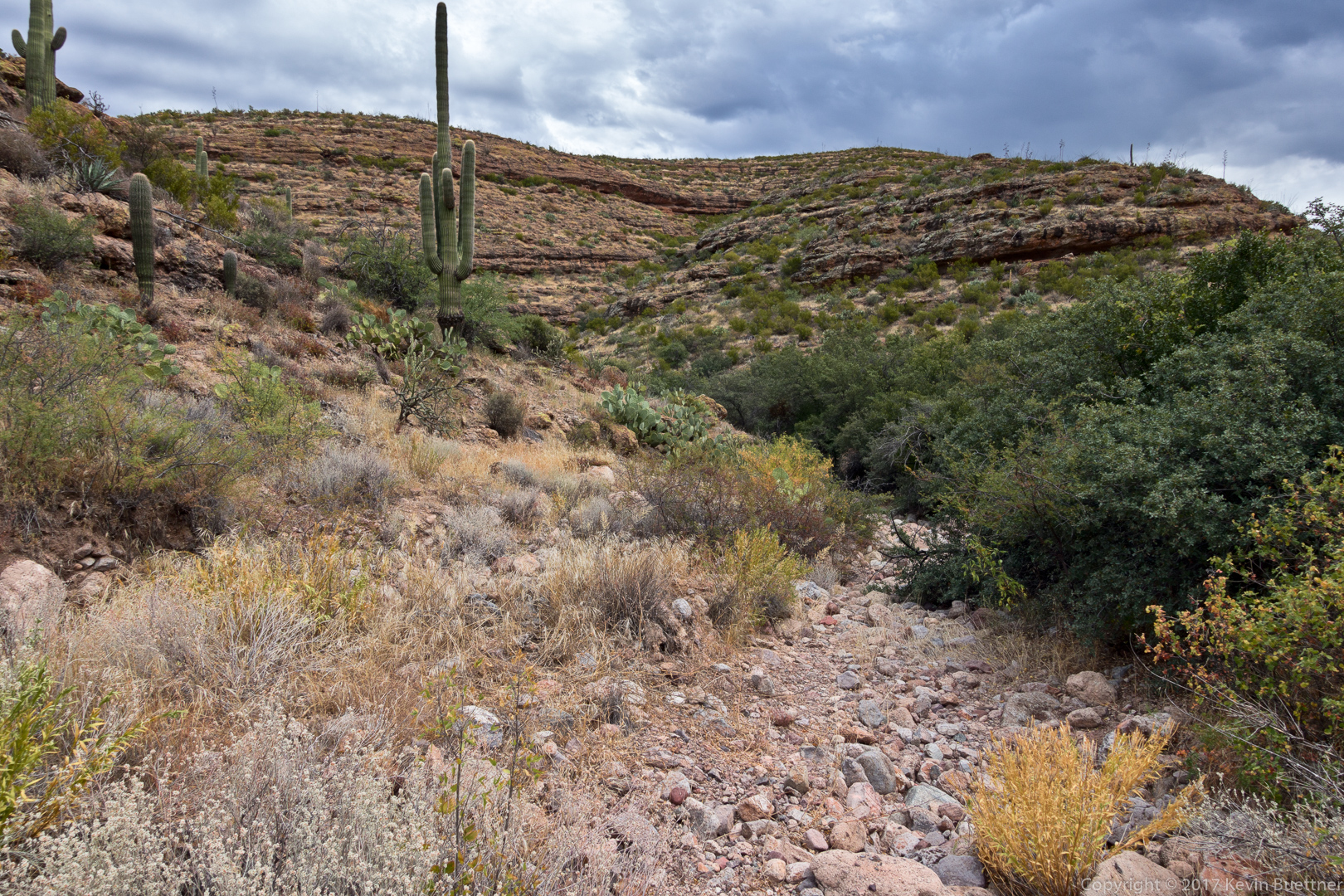 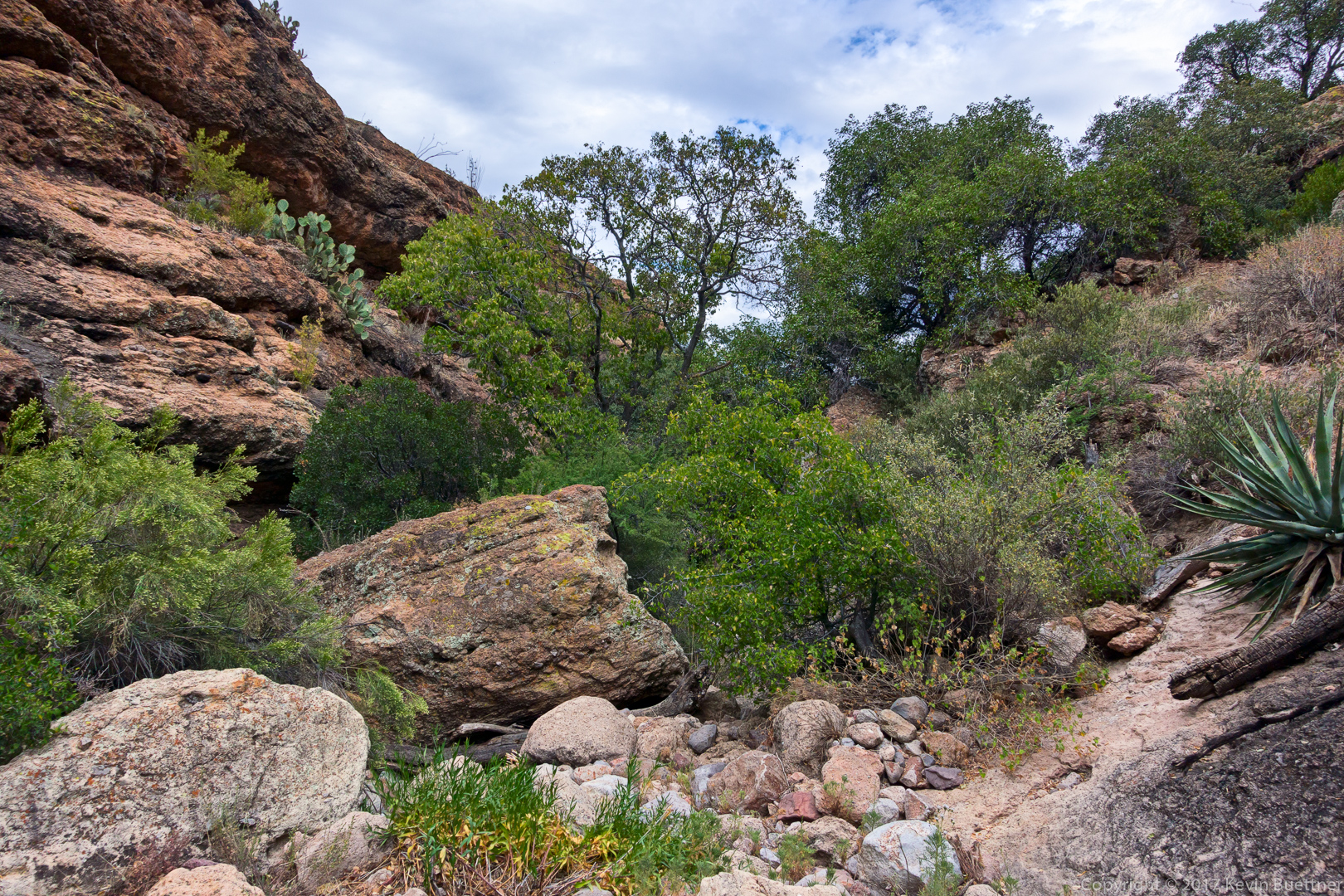 As the walls started to get steeper, the way became easier for a time. 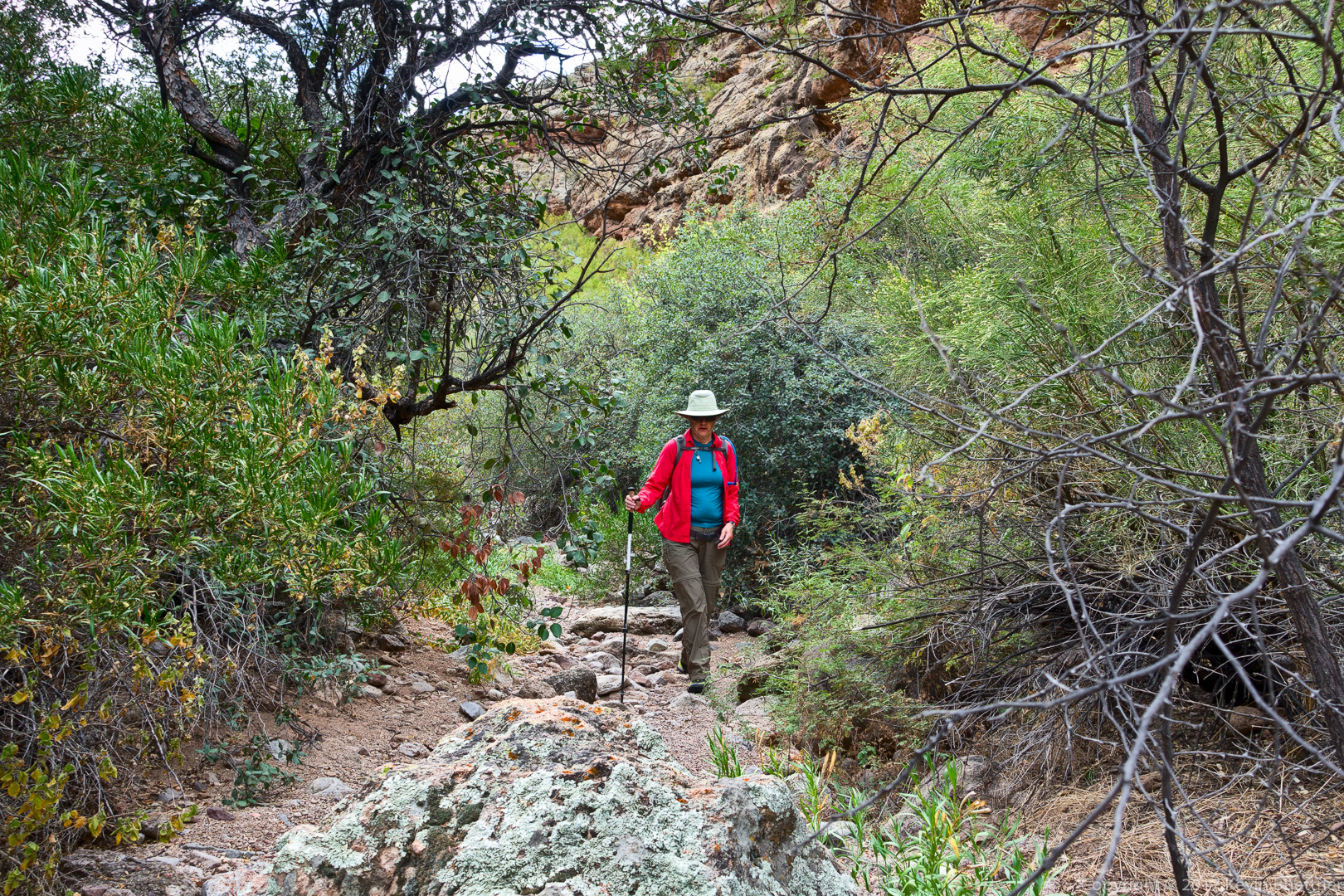 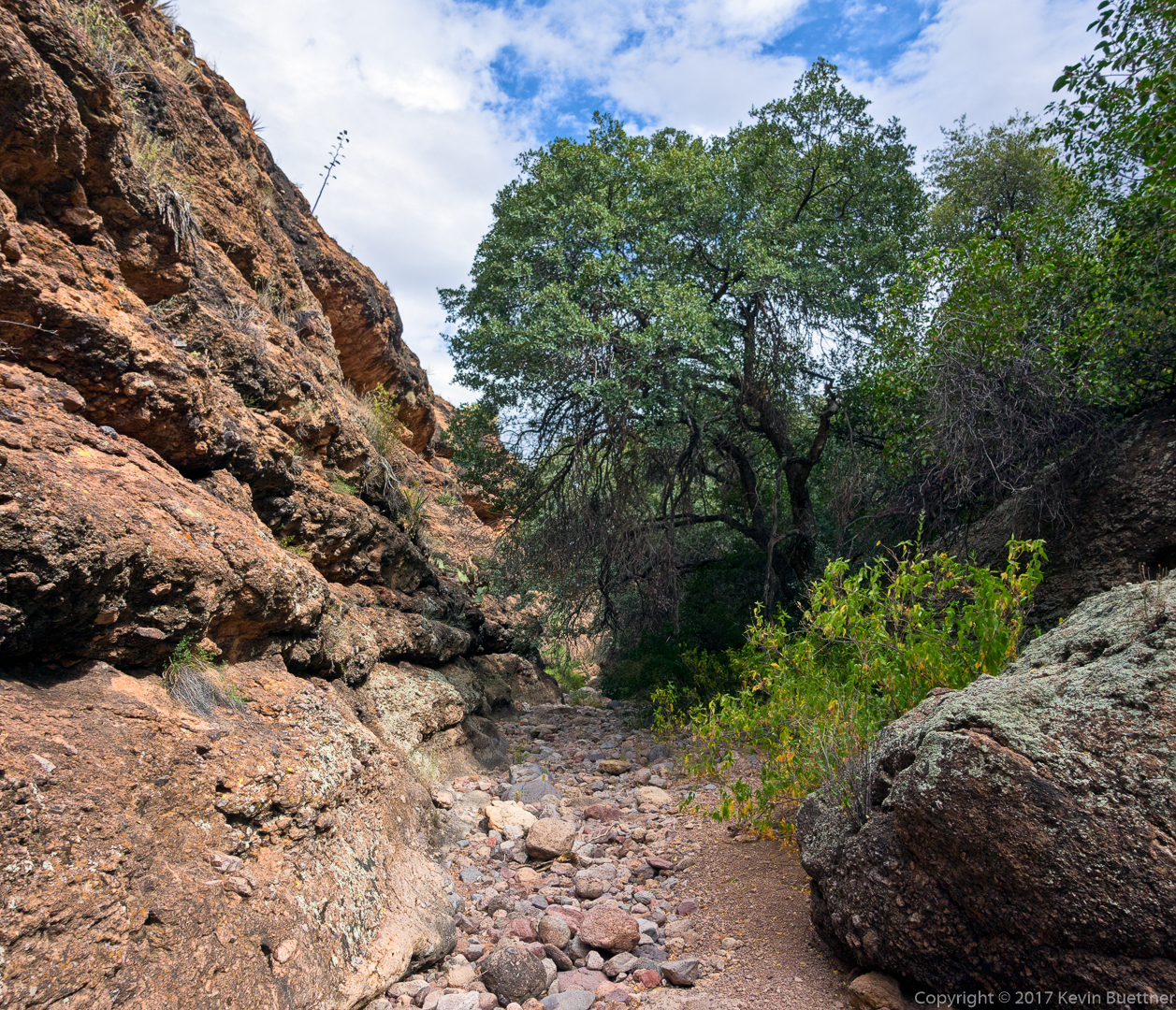 But after a while, the way down started to get steeper. 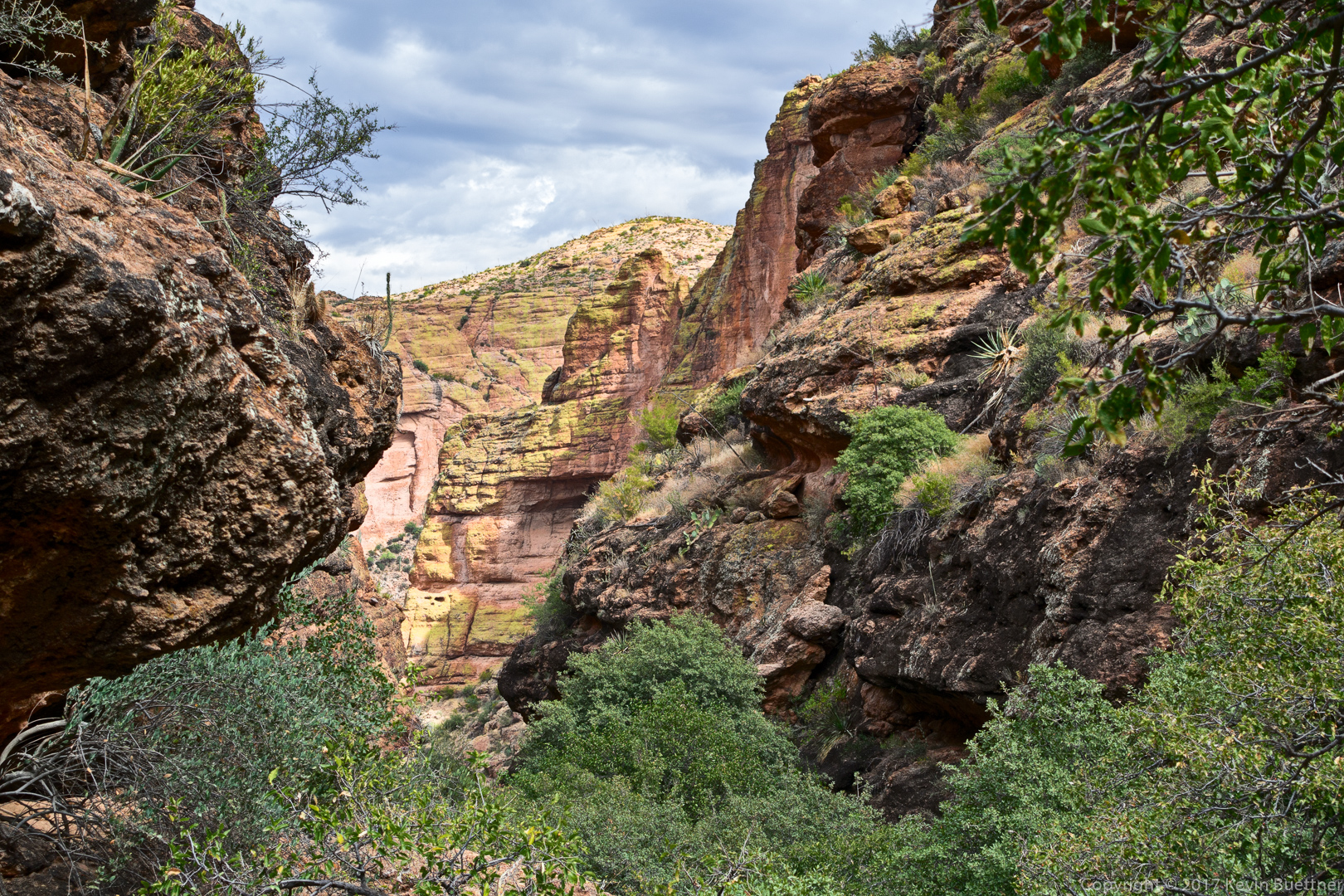 I found the striations in this wall interesting. 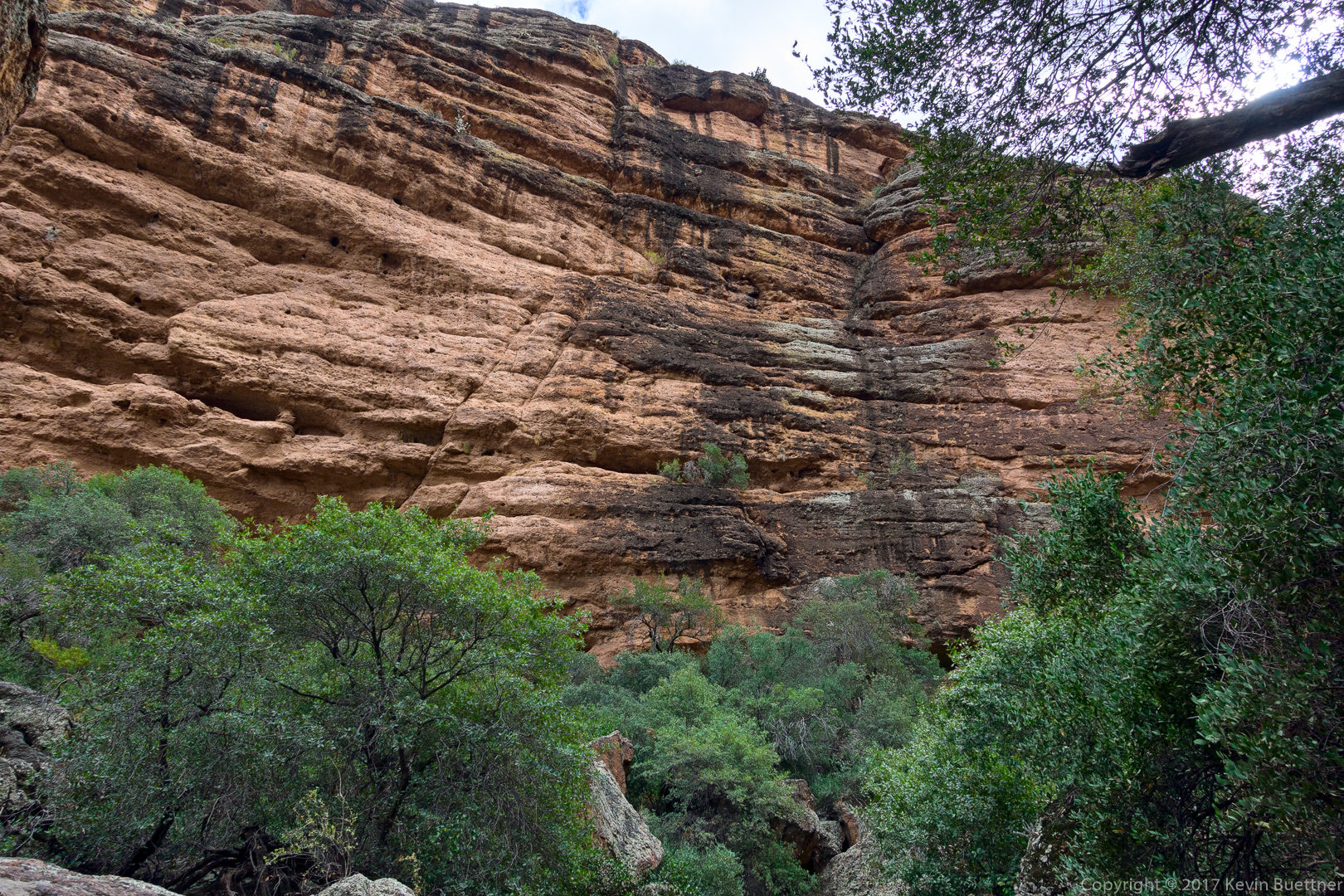 I took this photo when I was scouting a way down. We ended going down a short wall which had a nearby tree which helped us get down. 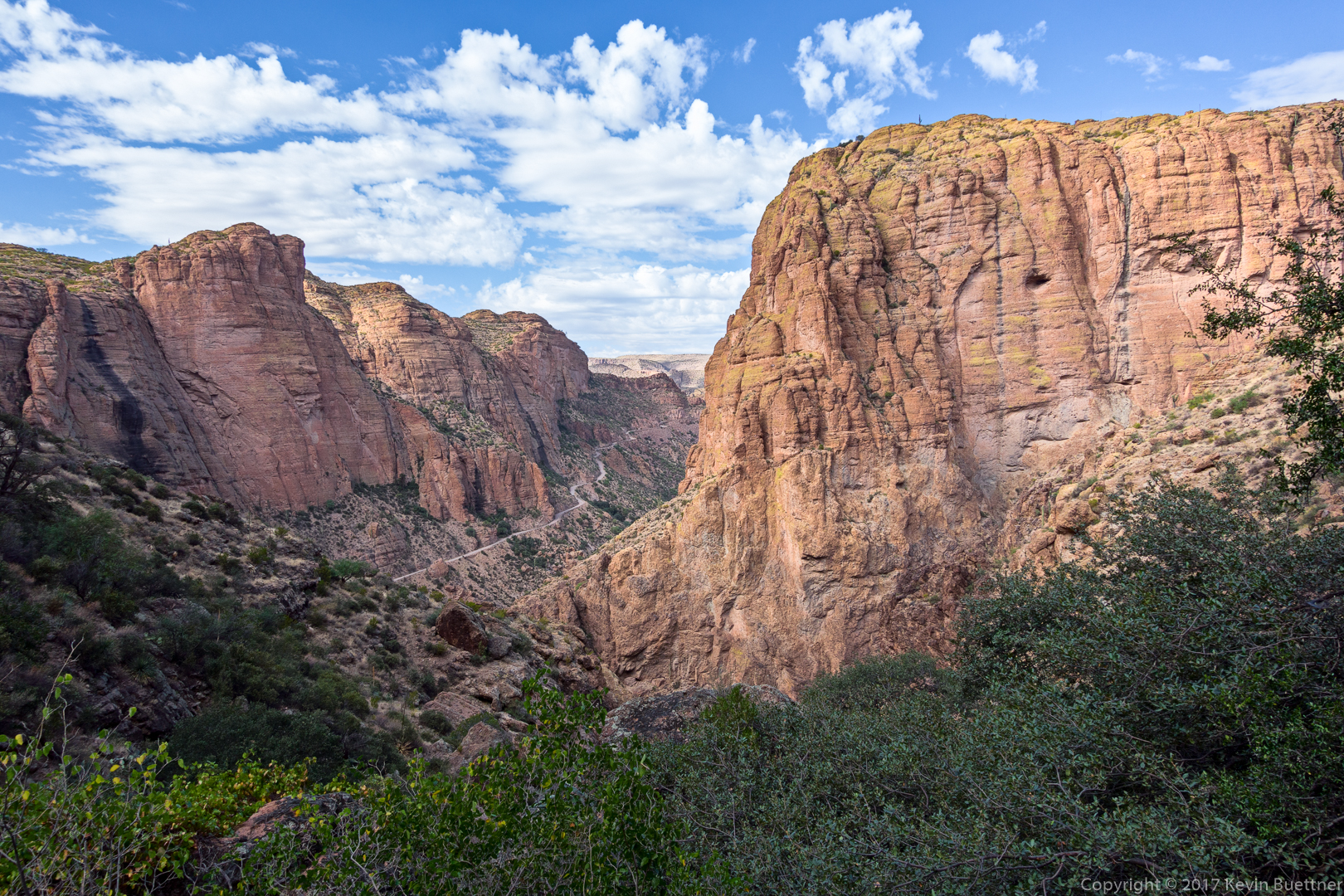 After taking this photo, the way got considerably harder. I was so focused on figuring out how to proceed down the canyon that I forgot to take pictures of our adventure. 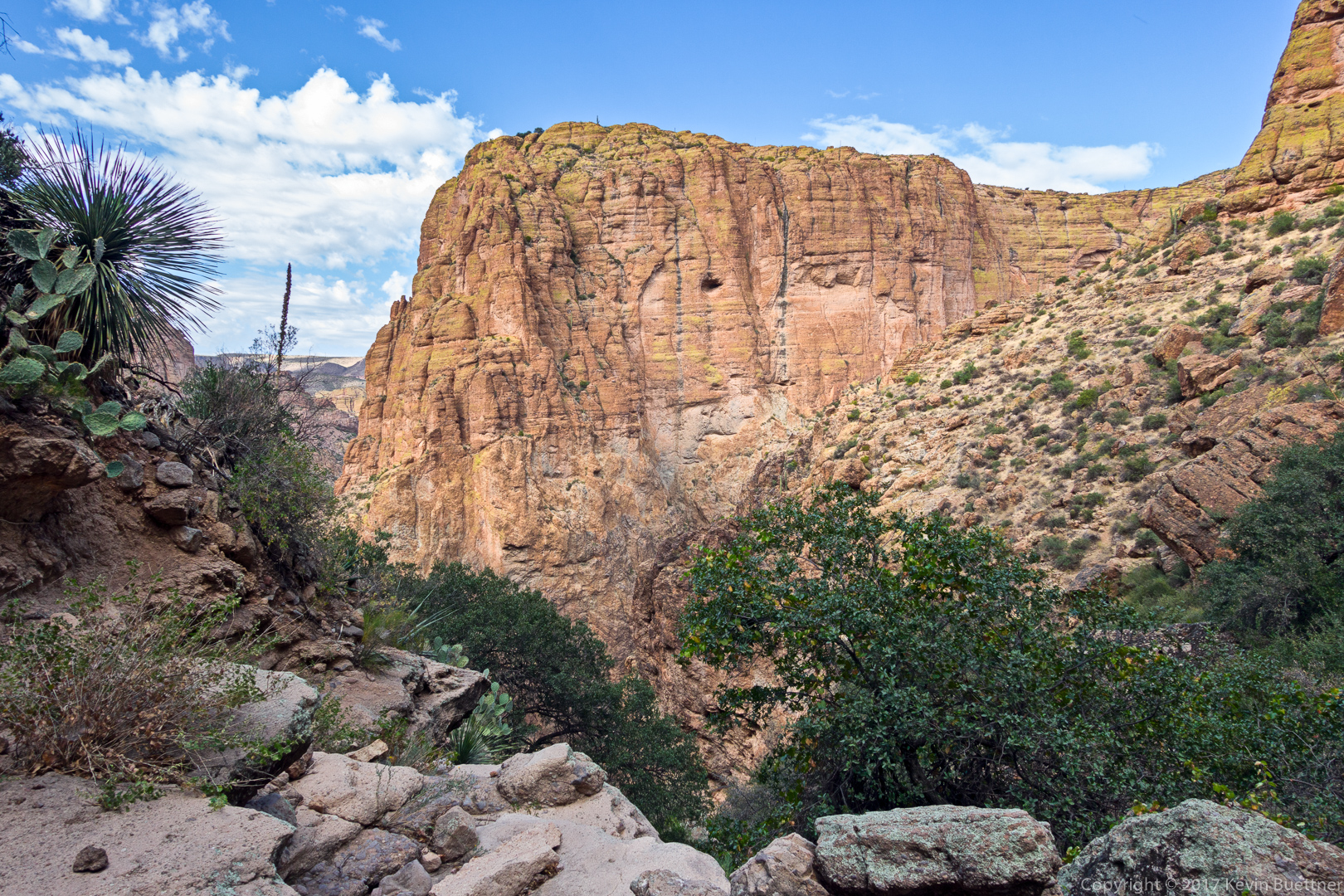 I took a few more photos when we (finally) reached the 130 foot rappel. The larger boulder to the right is the anchor. The rope bag with 200 foot rope is in front of the boulder. If you look closely, you can see some purple and green webbing. The green webbing was in better shape. I used a carabiner block along with a pull cord for rope retrieval. 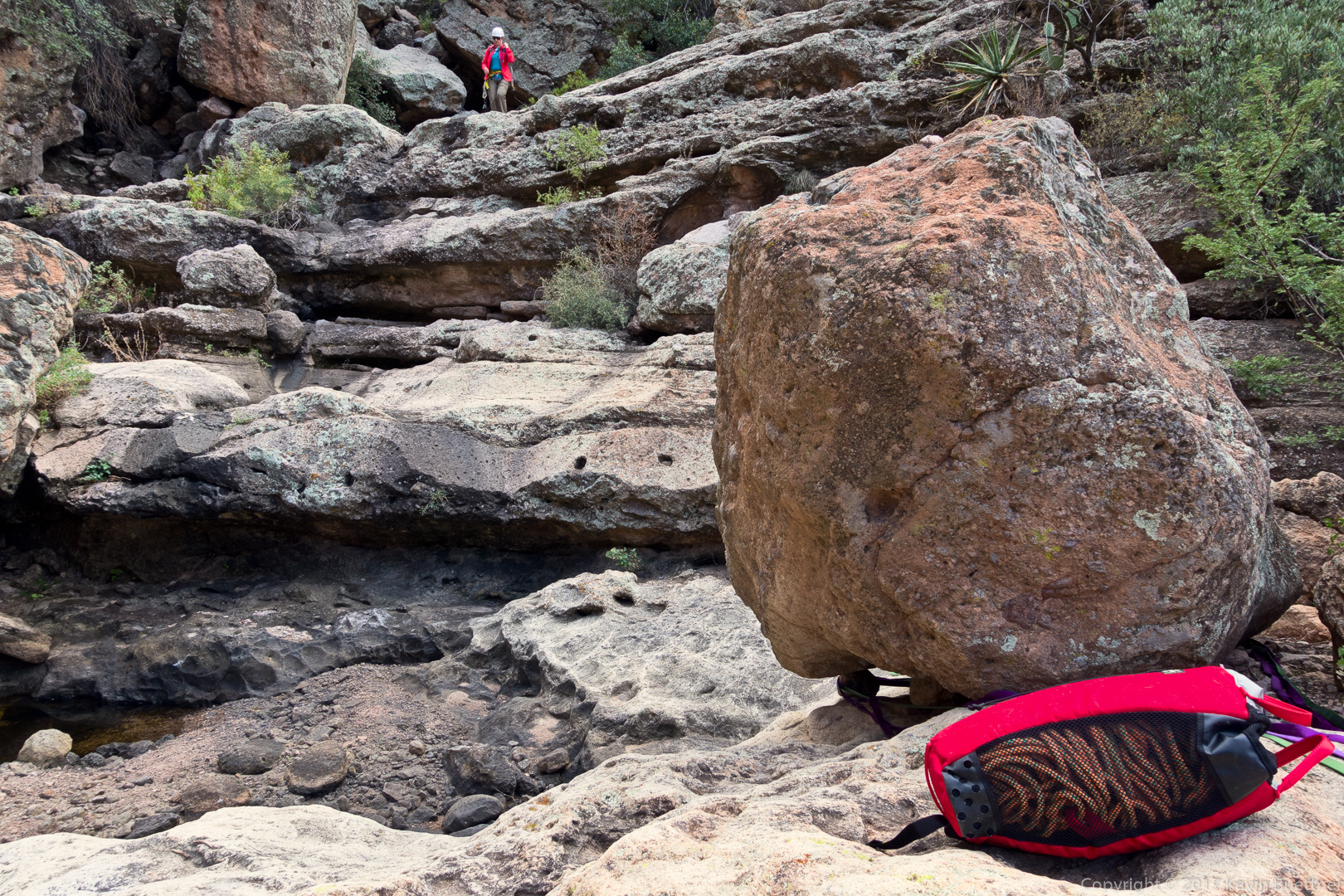 Marilyn down-climbs an easy section just before the rappel. 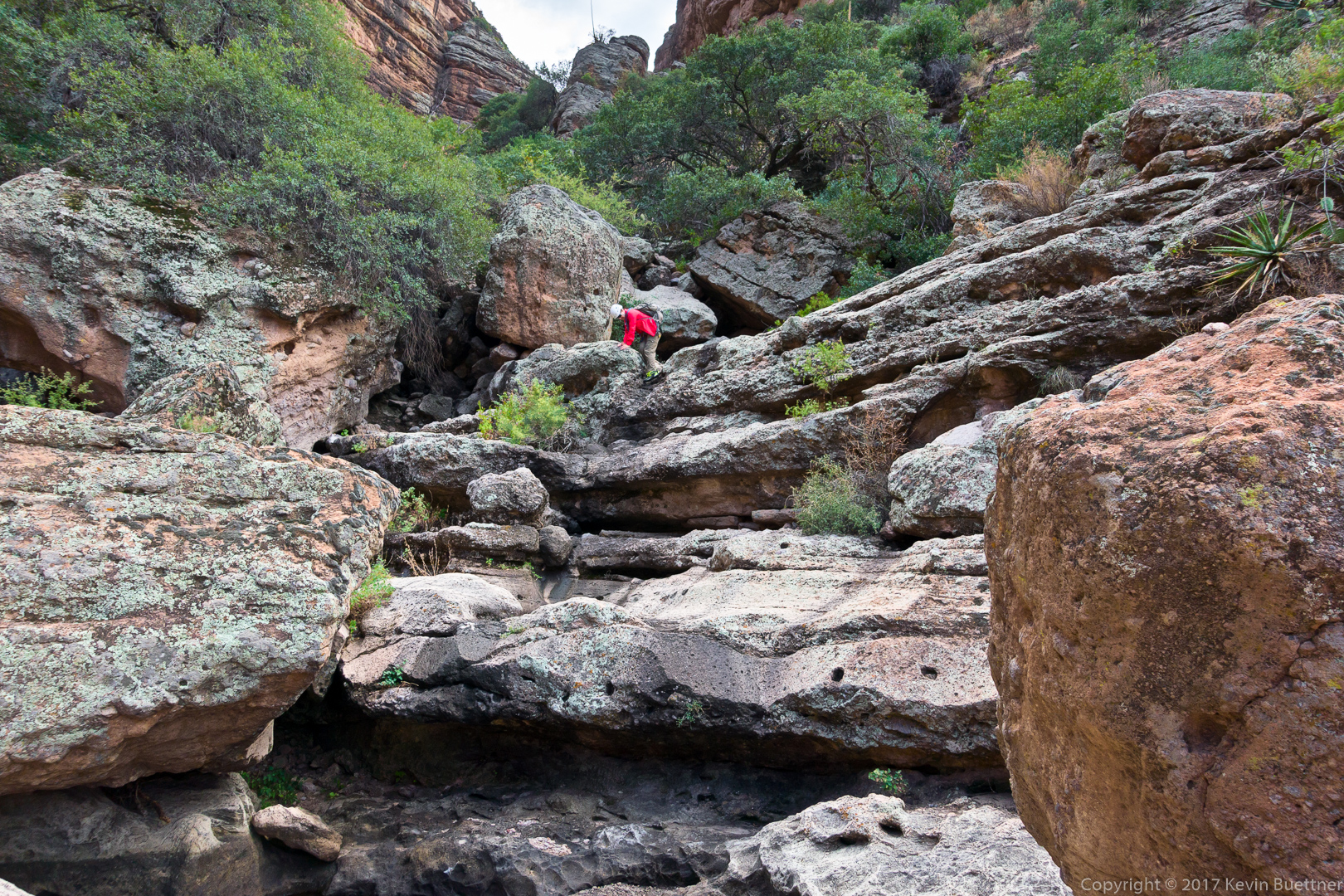 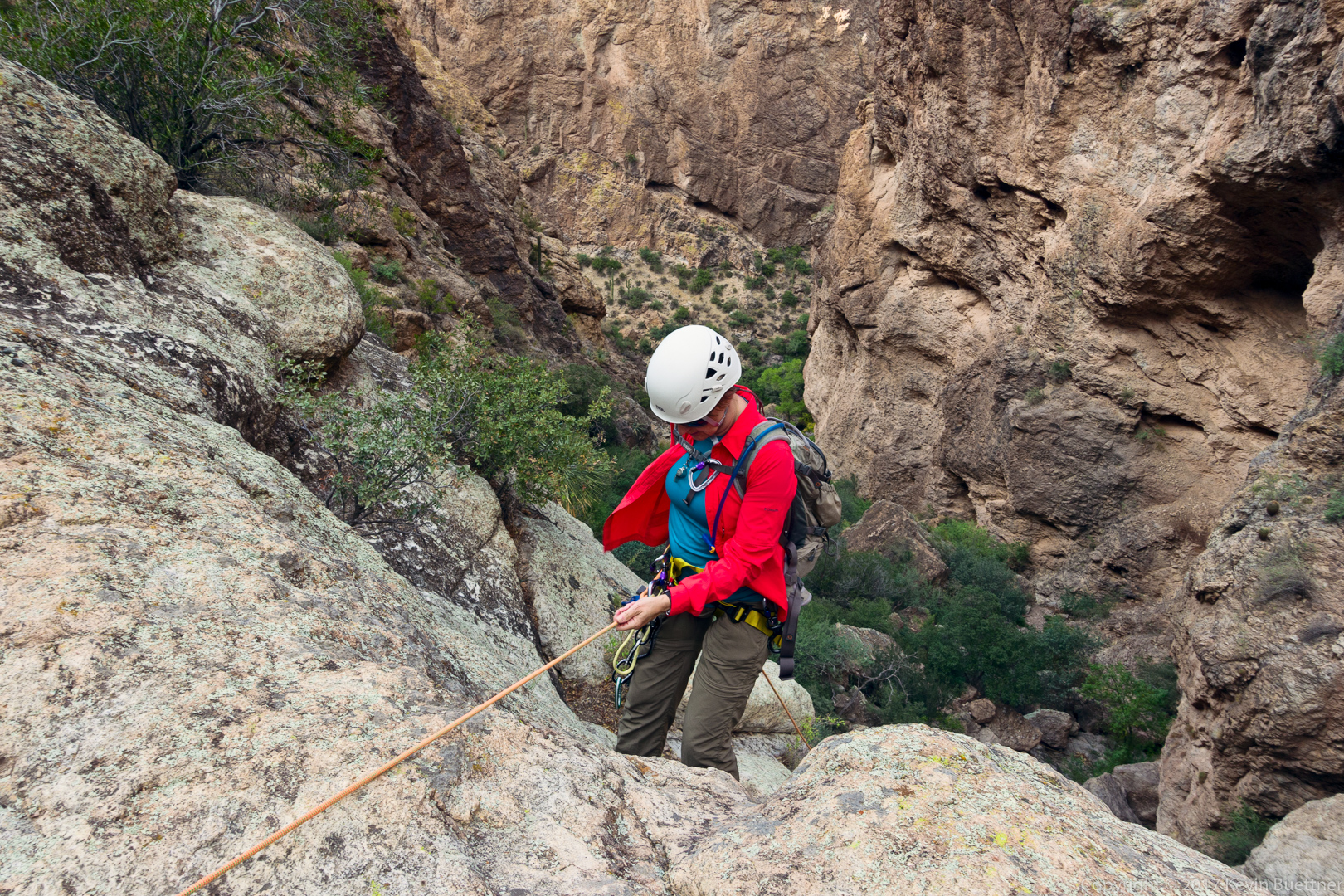 Marilyn is scoping out the upcoming steep section of the rappel. She was also trying to figure out whether or not she could get the rope on the other side of the tree. (She couldn’t.) 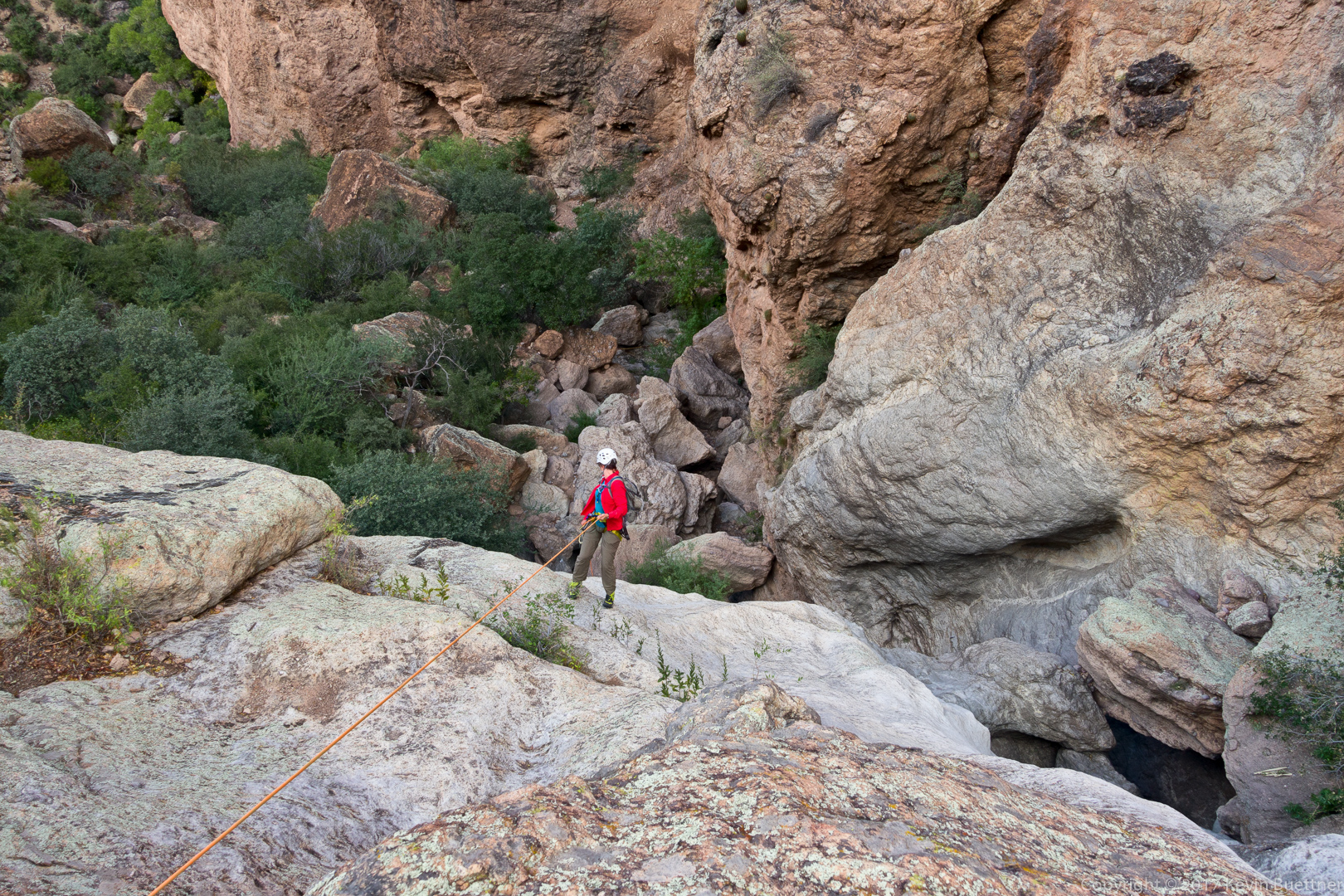 This was the view from the top of the rappel. After the rappel, there was still quite a lot of down climbing and I, again, forgot to take more pictures. 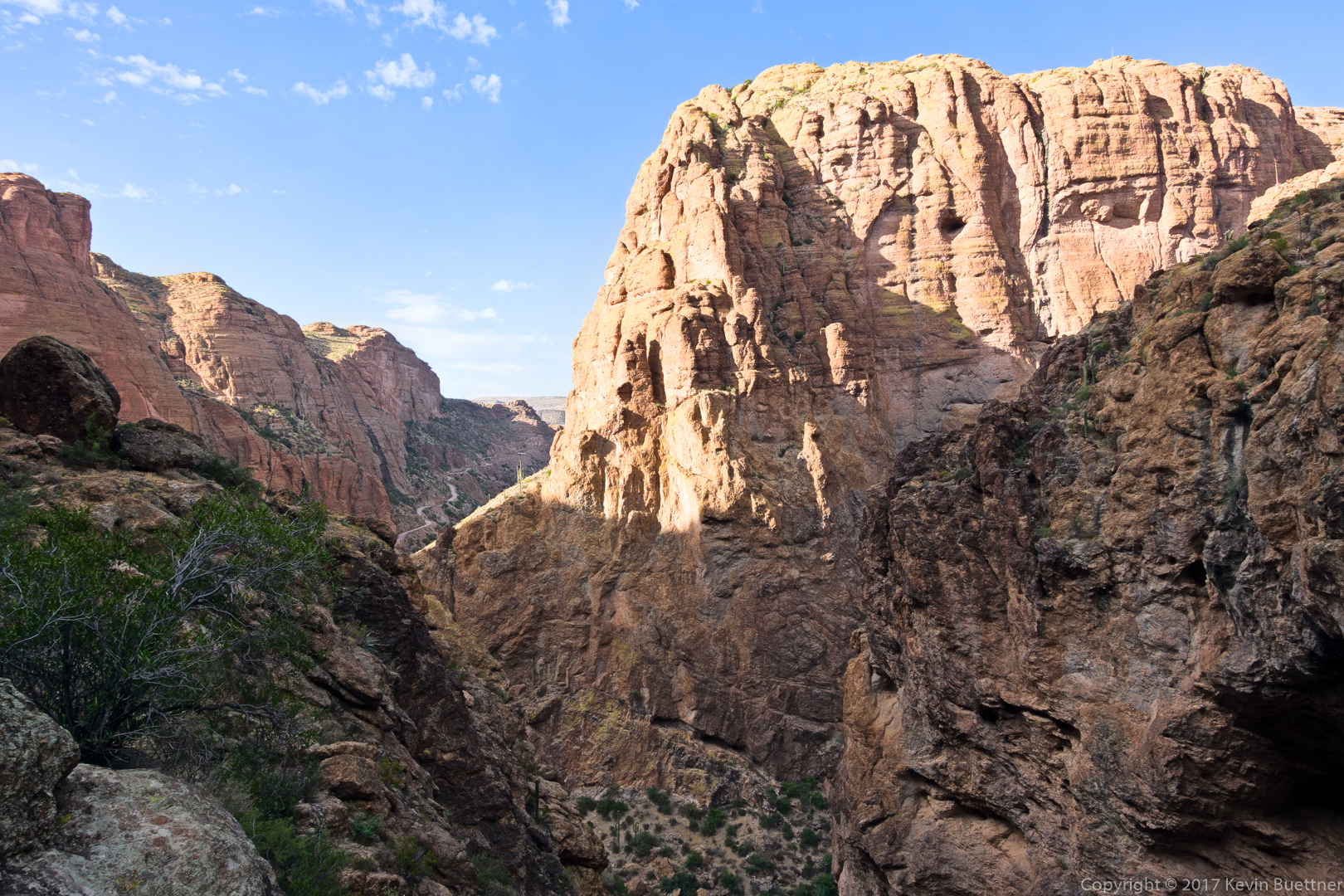