Friday’s hike this week took us out to the Marcus Landslide Trail in the McDowell Sonoran Preserve.  Eleven of us started out from the Wagner Trailhead.  We hiked through the campground, using one of the campground trails to get to the Granite Trail.  From there we hiked, in succession, portions of Bluff, Pemberton, the Rock Knob Trail, the Marcus Landslide Trail, the Boulder Trail, Pemberton, Tonto Tank, and Pemberton.  We ended up hiking the main park road back to our vehicles at the Wagner Trailhead.

Amy and four others split off from the long hike group on the Bluff at the upper Granite Trail Intersection.  Nancy, Linda, Janet, Nick, Mike, and I continued on up the Bluff to finish the route sketched out above   Below is the map of our hike.  My GPS reported the distance as 11.4 miles, but Google Earth reported the track as being only 11.2 miles.

Here’s a group photo just after hiking up the short, but steep hill at the beginning of the Bluff Trail: 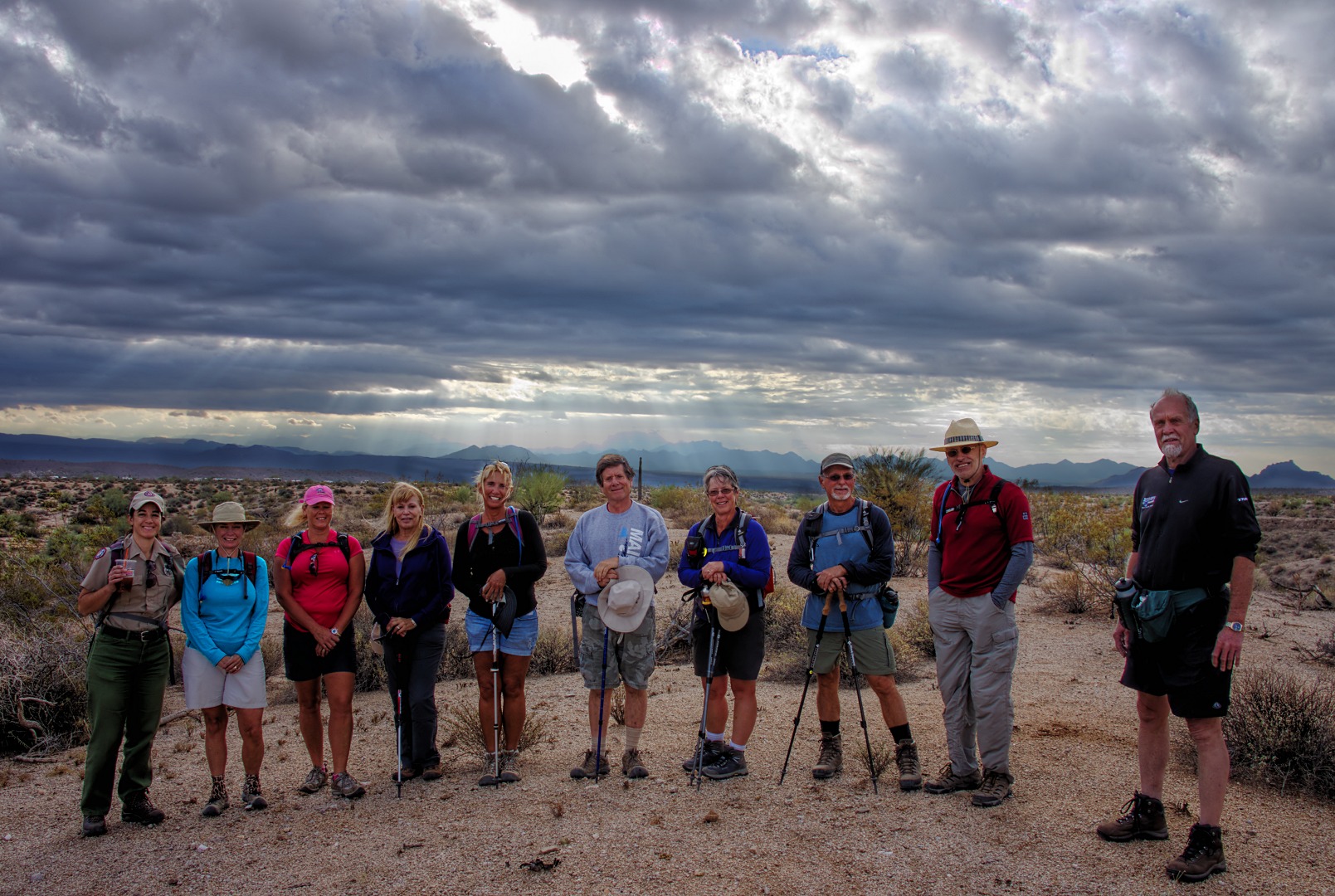 Linda took the photo below in which Amy had us all kneel (or squat) down to better see the rays of the sun streaming through the clouds. 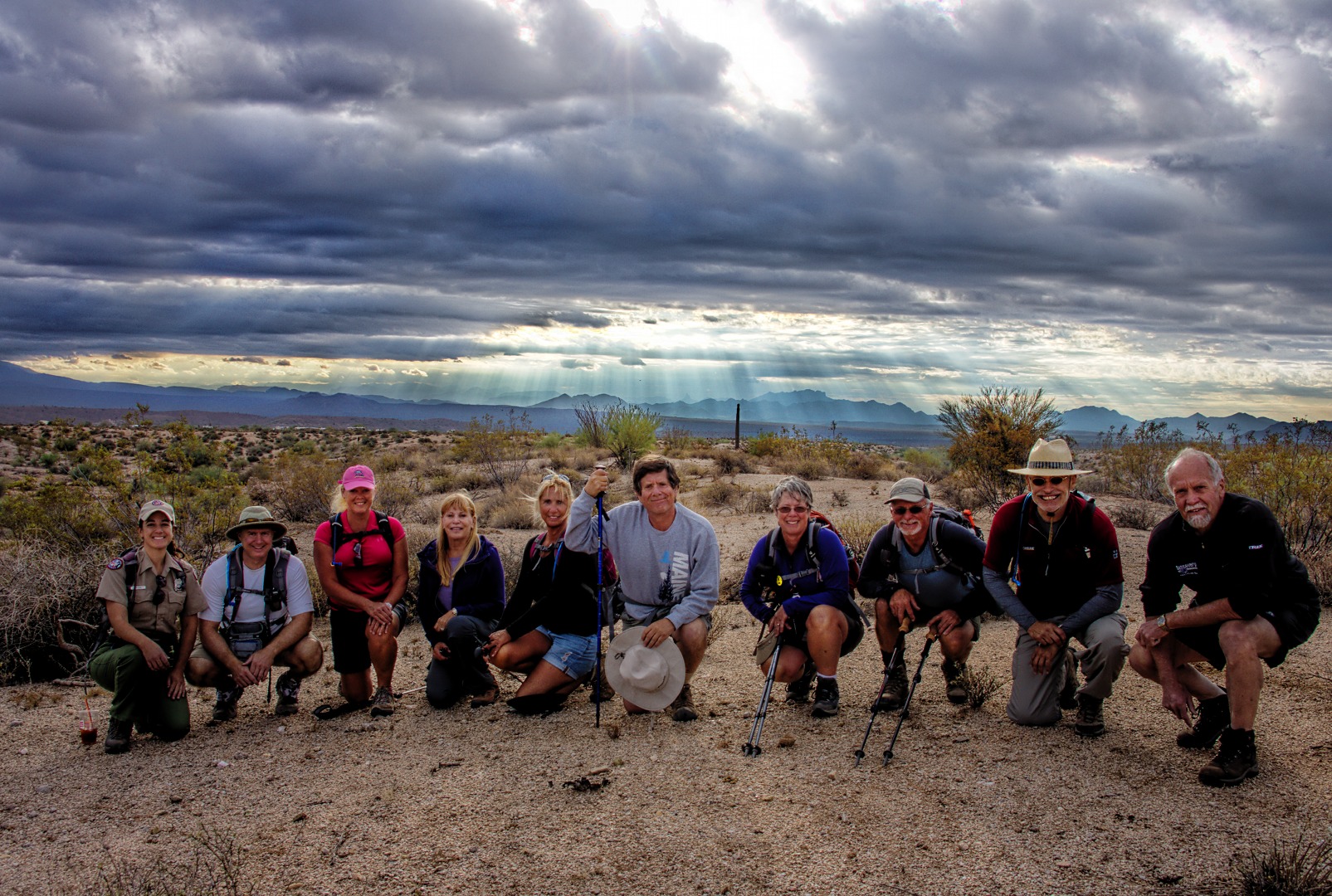 We saw this young Queen of the Night cactus as we hiked up the Bluff Trail: 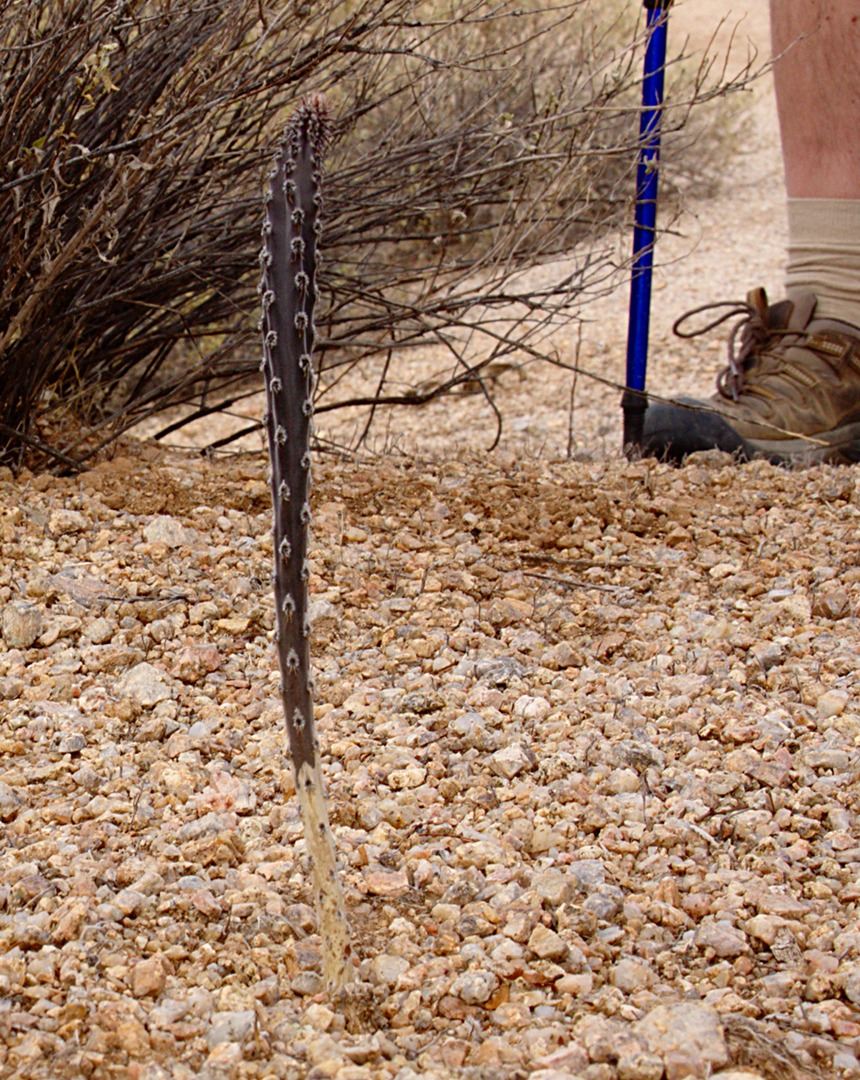 A view of Rock Knob near the end of the Bluff Trail: 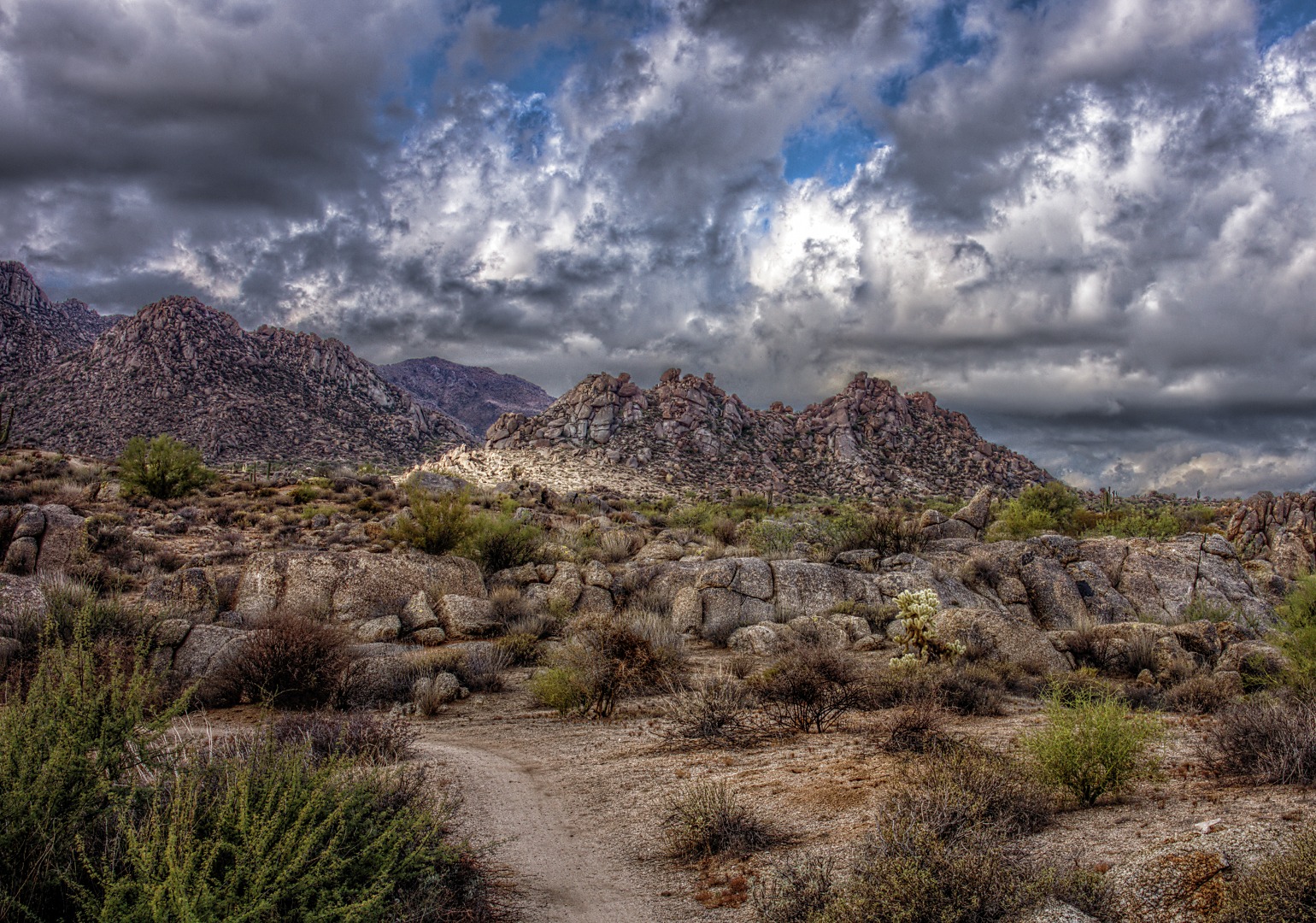 A view from the Rock Knob Trail: 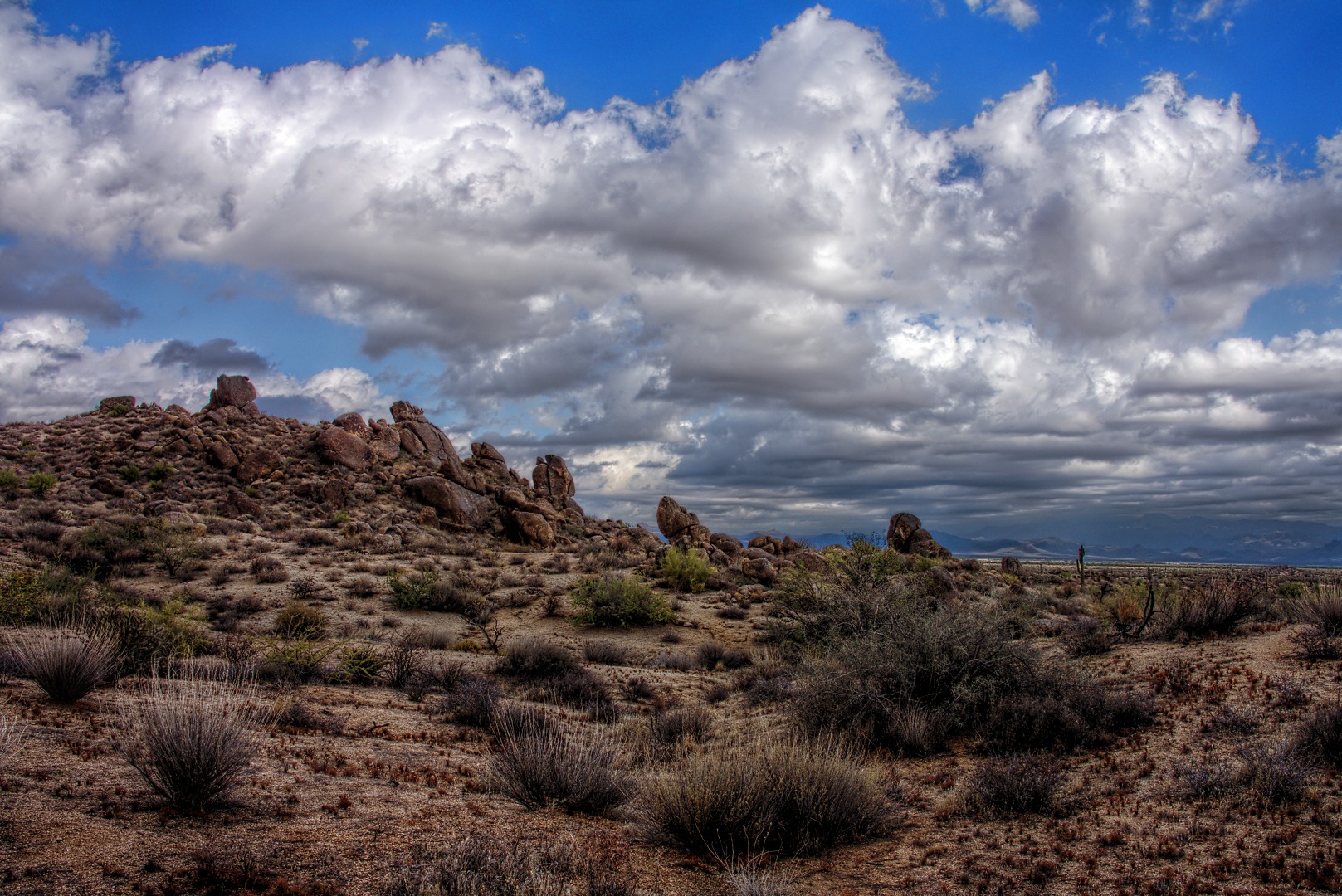 One of the mushroom shaped rocks on the Marcus Landslide Trail.  The sign had been put in since I was last out there perhaps a month ago.  The signs are informative, but in some cases, I think they were placed too close to the feature being described.  (In my opinion this photo, below, would have been better without a sign in it.) 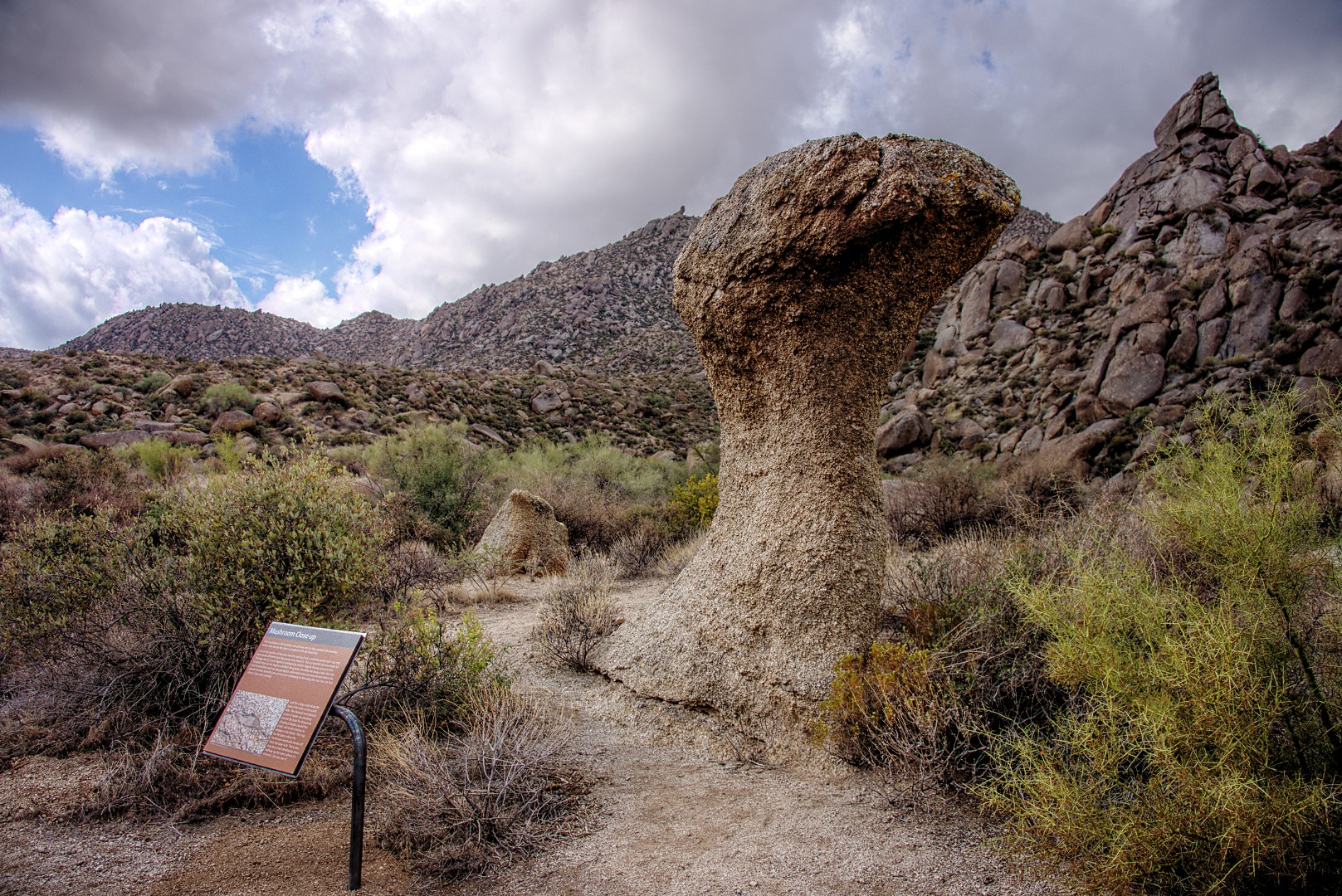 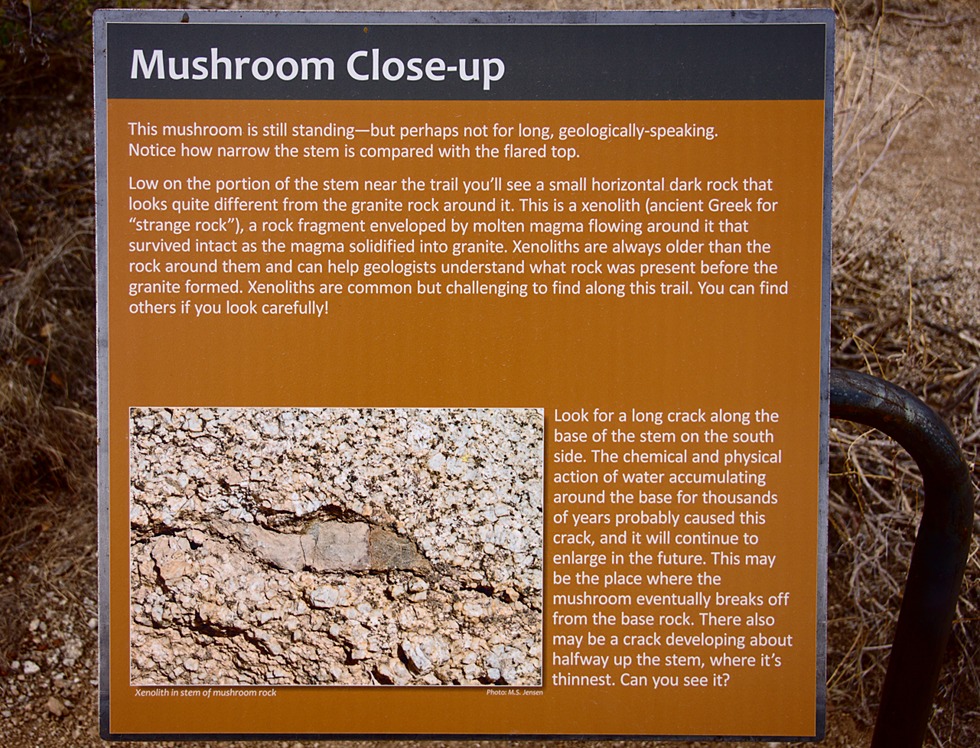 Nancy poses in beside a pair of mushroom boulders leaning against each other.  I took several shots here, but hated the fact that the sign was in the picture.  Finally, I asked Nancy to come stand in front of the sign.  I think it’s a much better photo as a result. 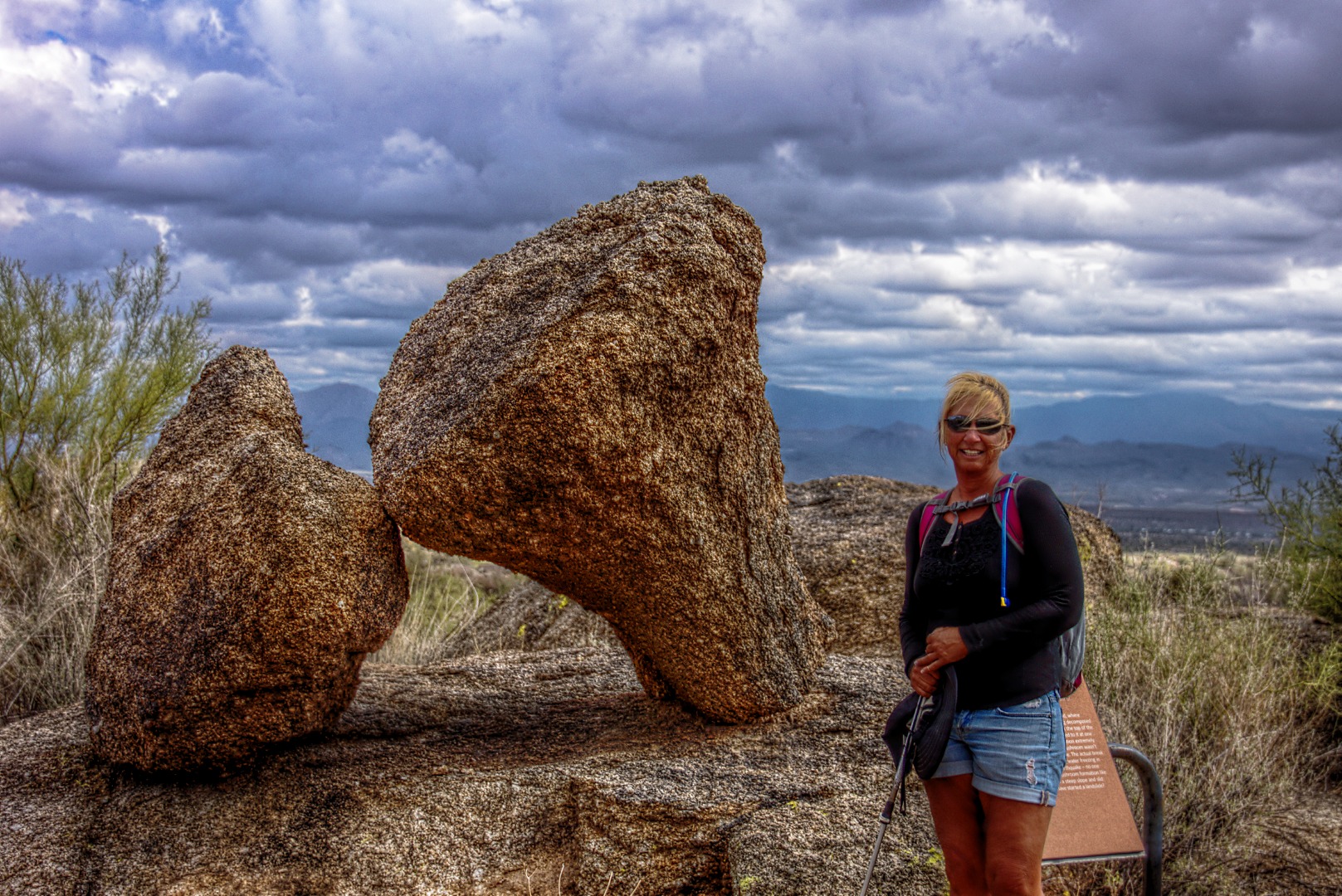 The hill in the foreground is a portion of the slide mass of the Marcus Landslide.  It extends for quite a distance from the preserve into McDowell Mountain Park. 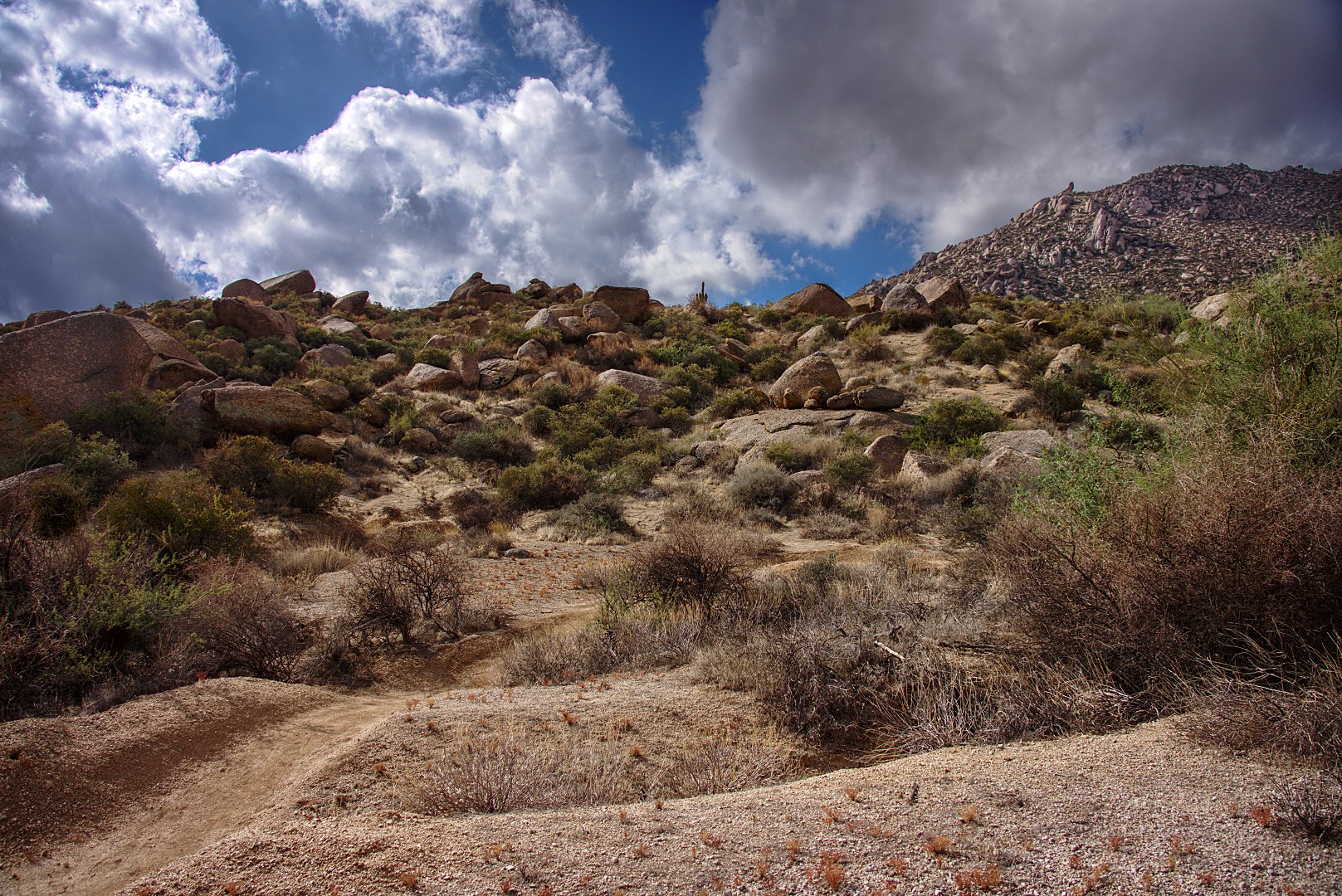 Nick sits in another abandoned and, this time, overturned vehicle that Linda spotted a short ways off the Boulder Trail. 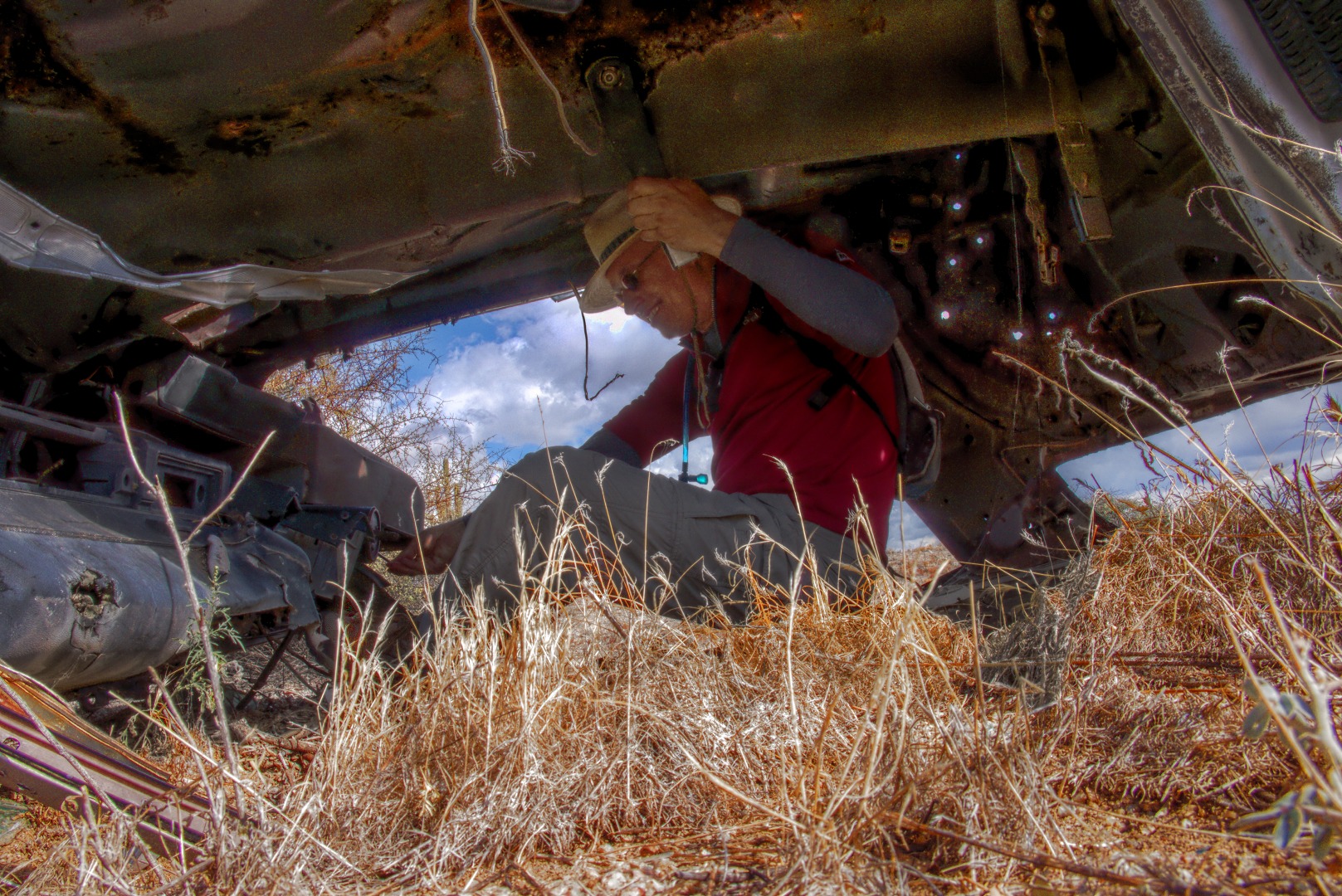 A pair of saguaros just off the Pemberton.  We saw these near the end of the hike just before crossing Stoneman Wash. 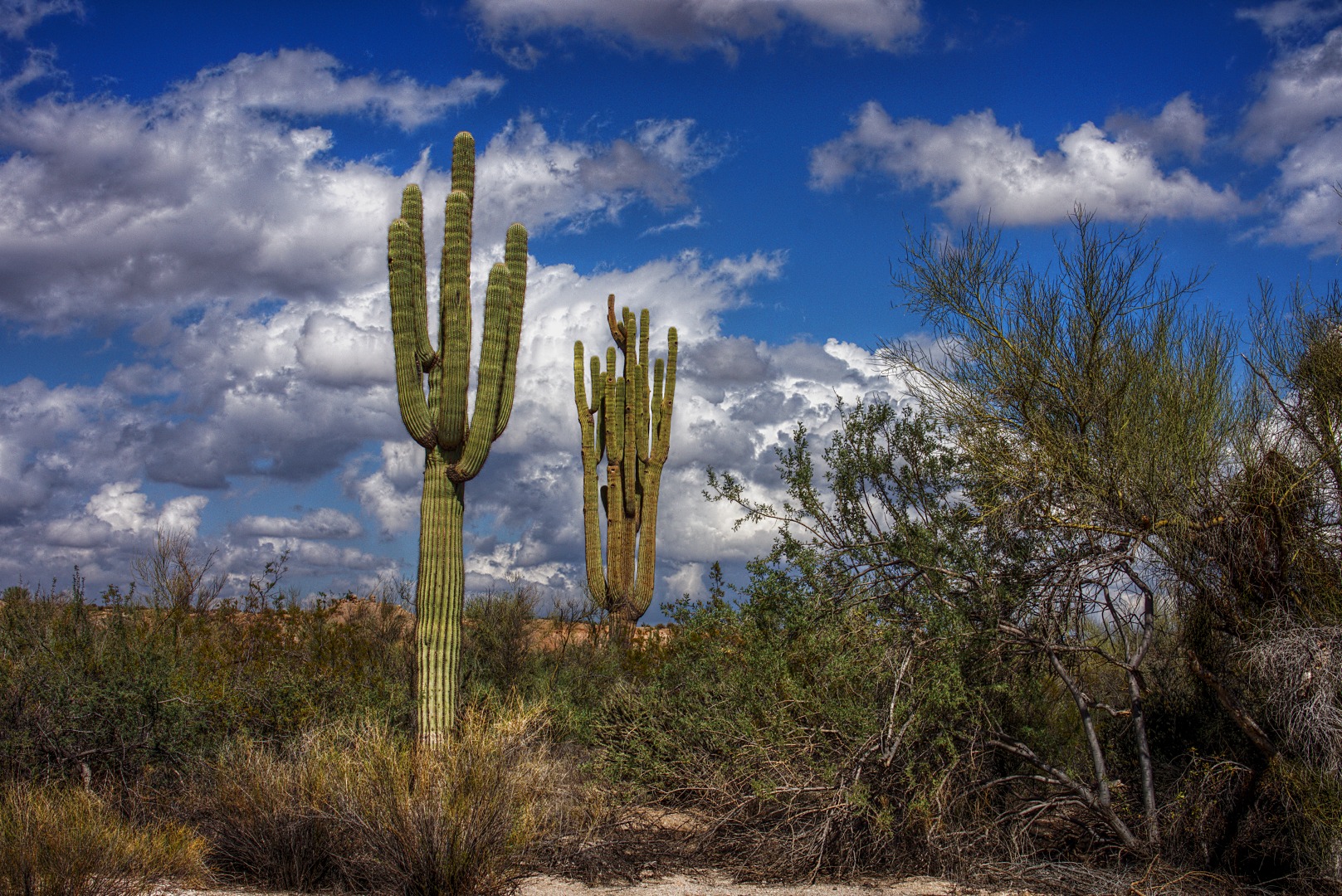