Marilyn and I hiked the Tom’s Thumb Trail on Sunday afternoon.  We parked in the new parking area – this adds a bit of distance to the hike.  I ended up with five miles exactly, though I did have to add a few extra steps in the parking area to arrive at that exact number.  We hiked up to Tom’s Thumb and back down, taking only a few excursions along the way.

Marilyn, near the beginning of the hike.  The trail is fairly steep with lots of switchbacks.  Elevation is gained quickly. 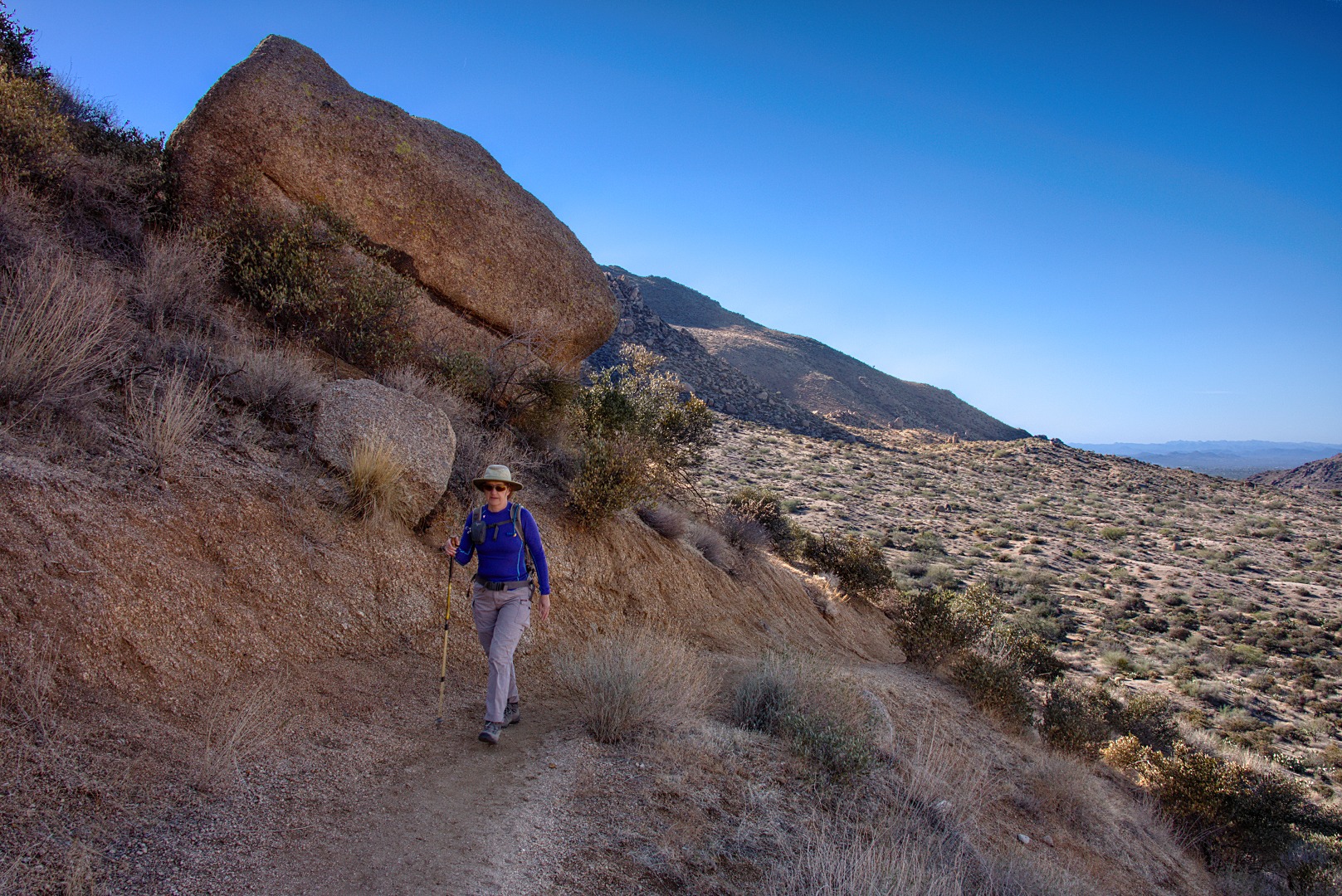 I took the climber’s access trail towards Gardener’s Wall.  Along the way, I got this photo of a climber approaching the belay station on Hanging Gardens (5.5).  If you look closely, you can see a pair of connected chains about seven feet above the climber’s head.  The guy leading it really sewed it up – I think there are at least eight pieces of protection visible in the photo. 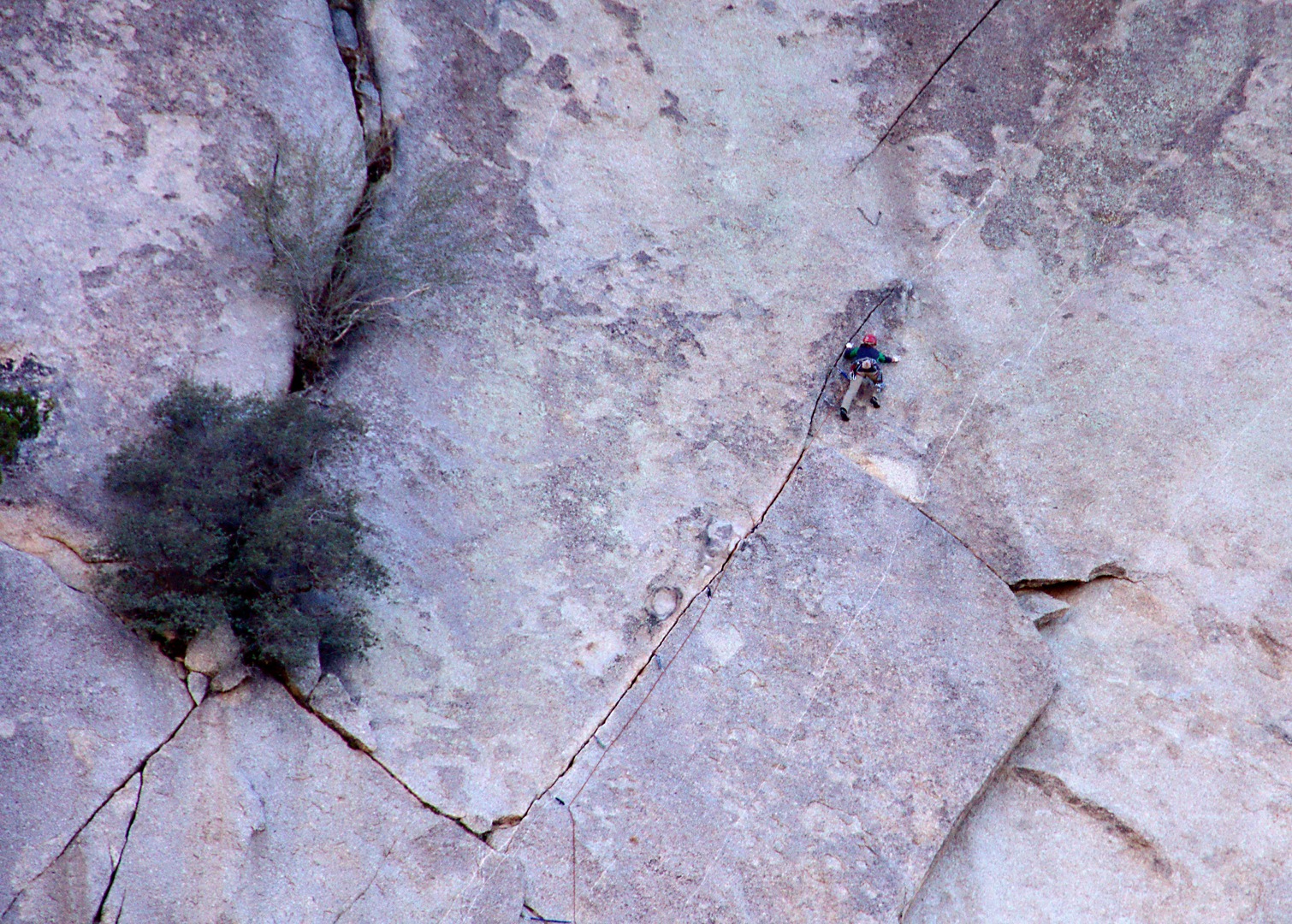 A side view of Gardener’s Wall, off to the left: 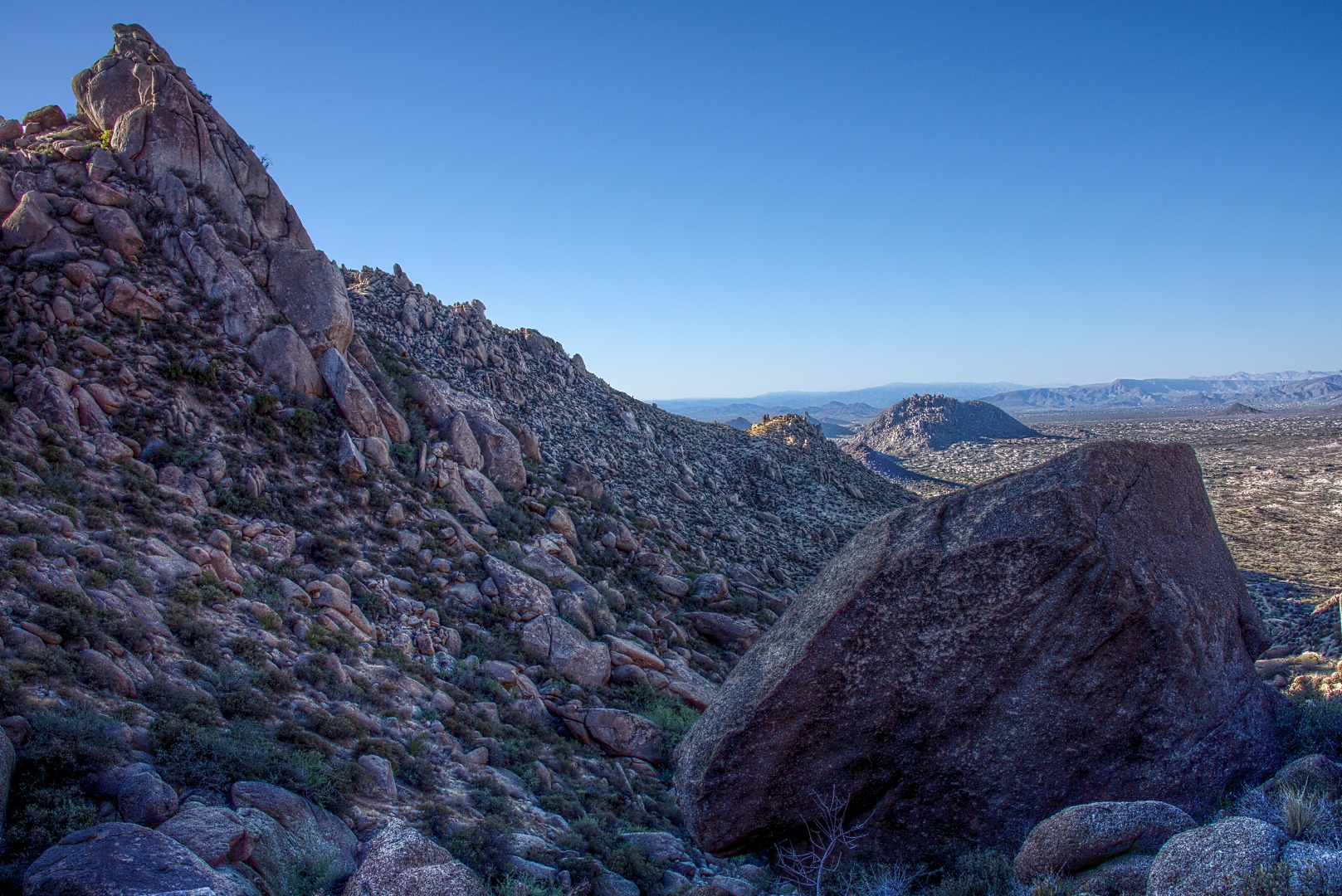 Marilyn stayed on the Tom’s Thumb Trail and got to Tom’s Thumb ahead of me.  In the photo below, Marilyn is standing on a rock to the right of Tom’s Thumb. 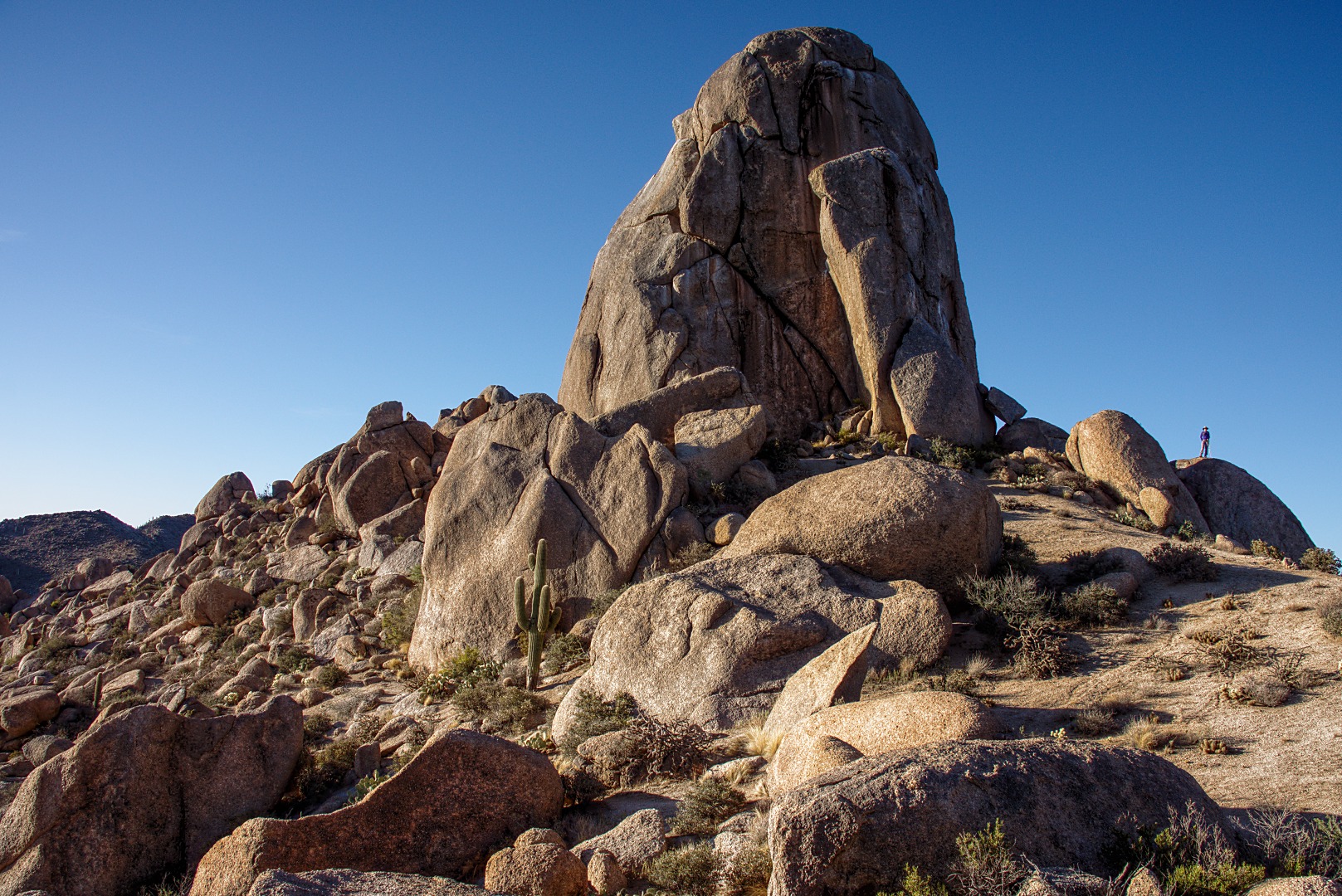 Another photo of Tom’s Thumb taken from a different location and framed so that the “thumb” is on the left rule of thirds line.  The RAW file for the photo below was converted using a custom color profile for the Sony NEX-7.  The NEX-7’s “Daylight” white balance setting was used for the majority of the photo, but a layer using “Shade” was used for the shady areas given them a somewhat browner look.  The opacity of a Mantiuk ’06 contrast equalization tone layer was set at only 20%.  The tone layer helps to explicate some of the detail in the various rock formations. 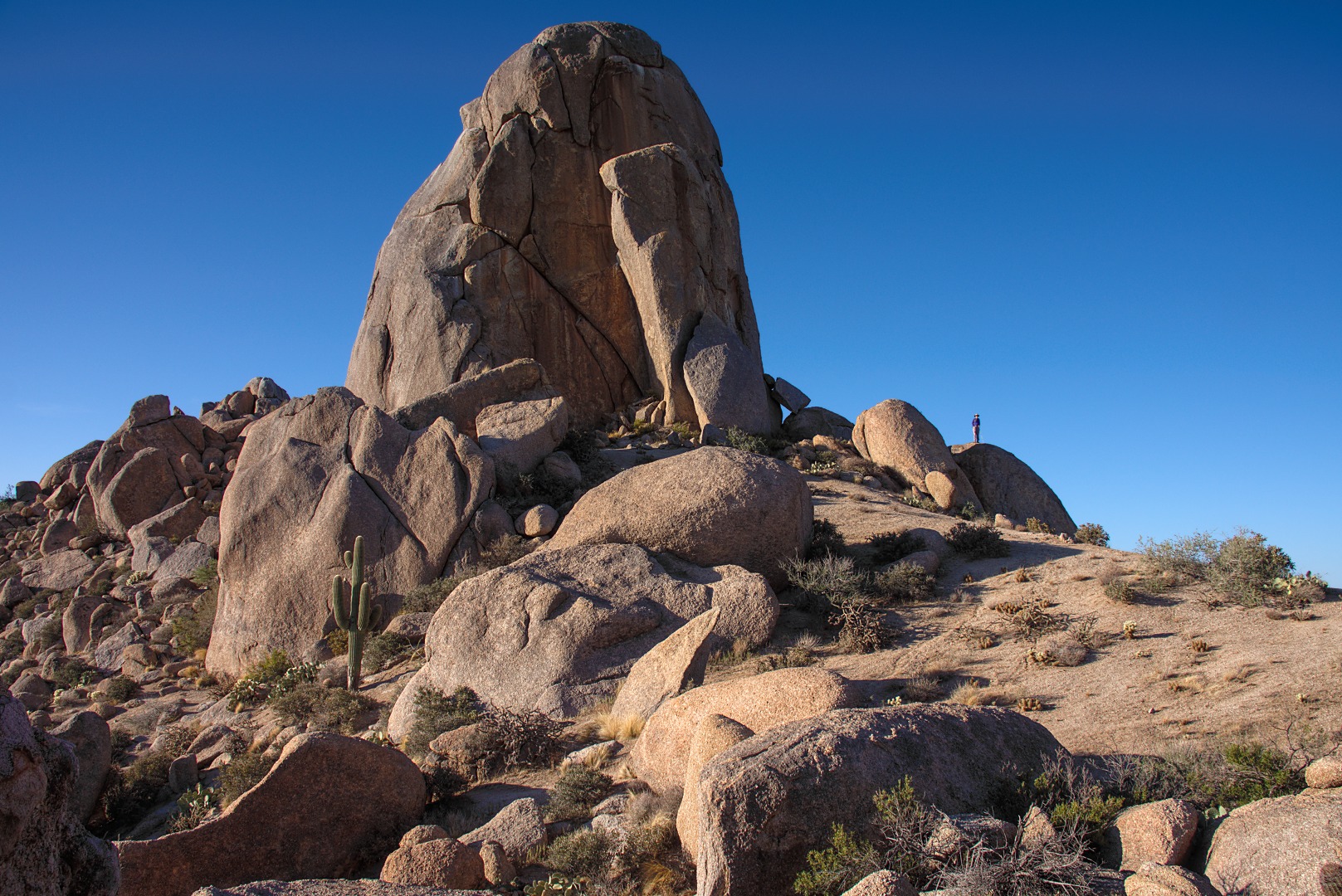 On the way back, we stopped by a cave dwelling complete with stove, picnic table and a bed made out of sand bags with a blanket spread over the top.  There are additional sand bags filling in a hole in the back of the cave and more near the entrance, probably intended to block wind and rain. 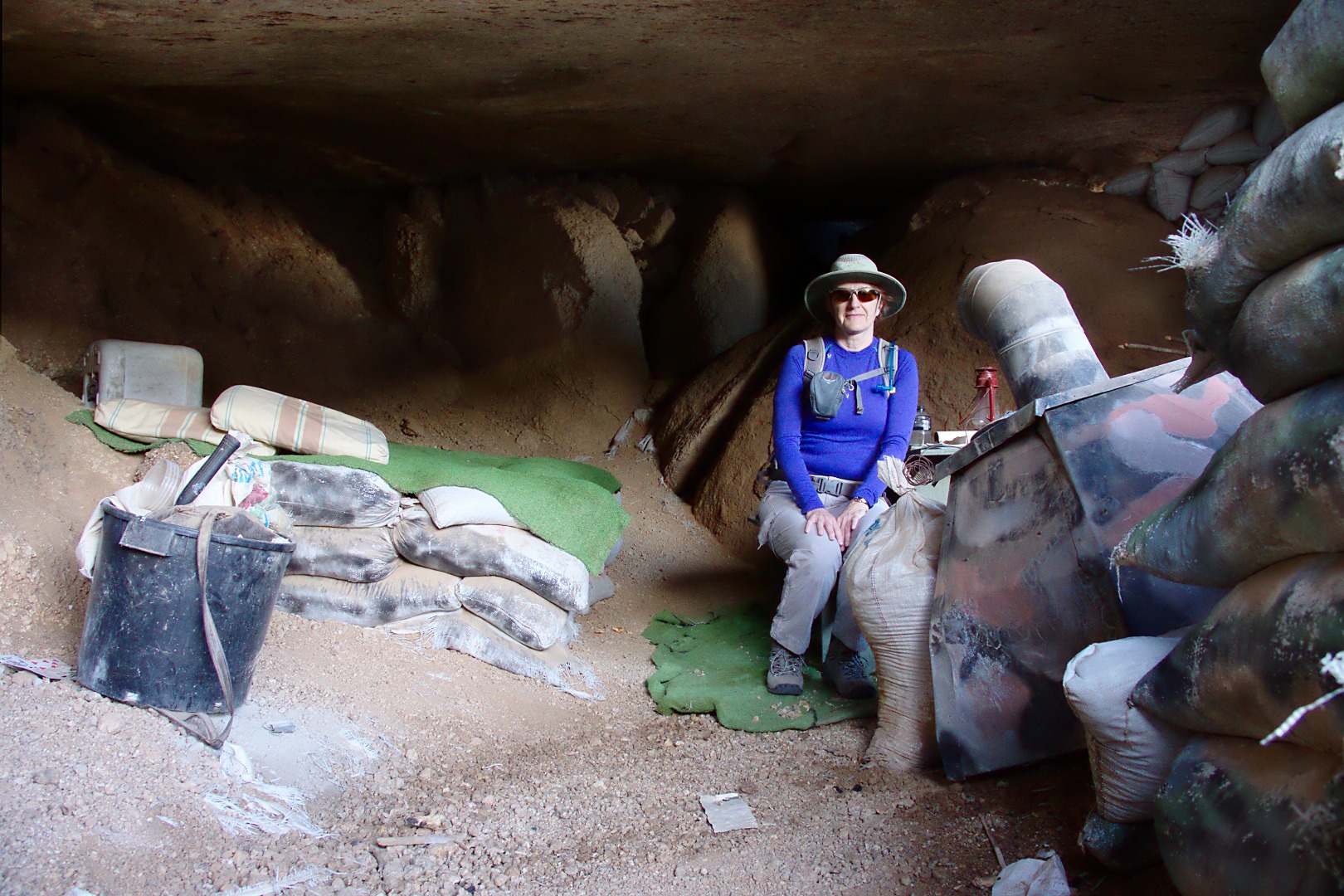 Pinnacle Peak, Troon, and some other small mountains (of which I do not know the names): 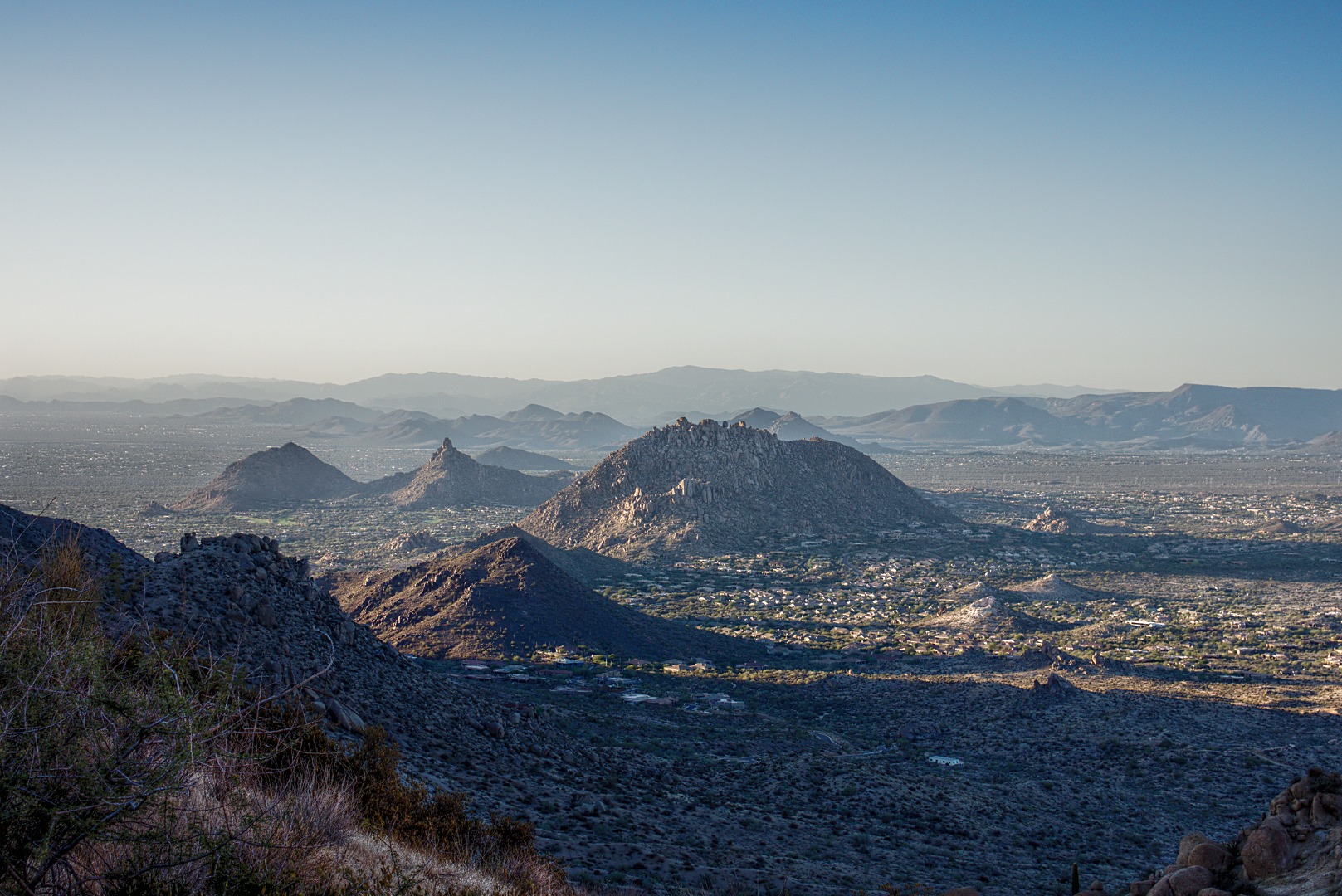 One of Marilyn’s photos, taken with the RX100: 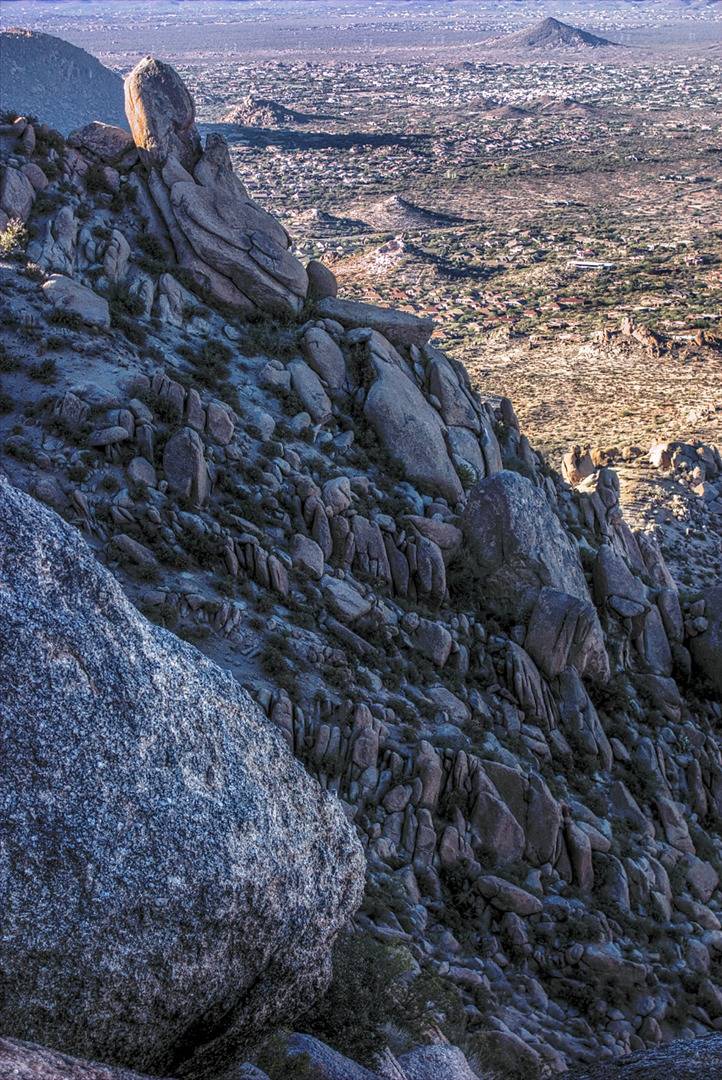 A photo of me photographing Tom’s Thumb: 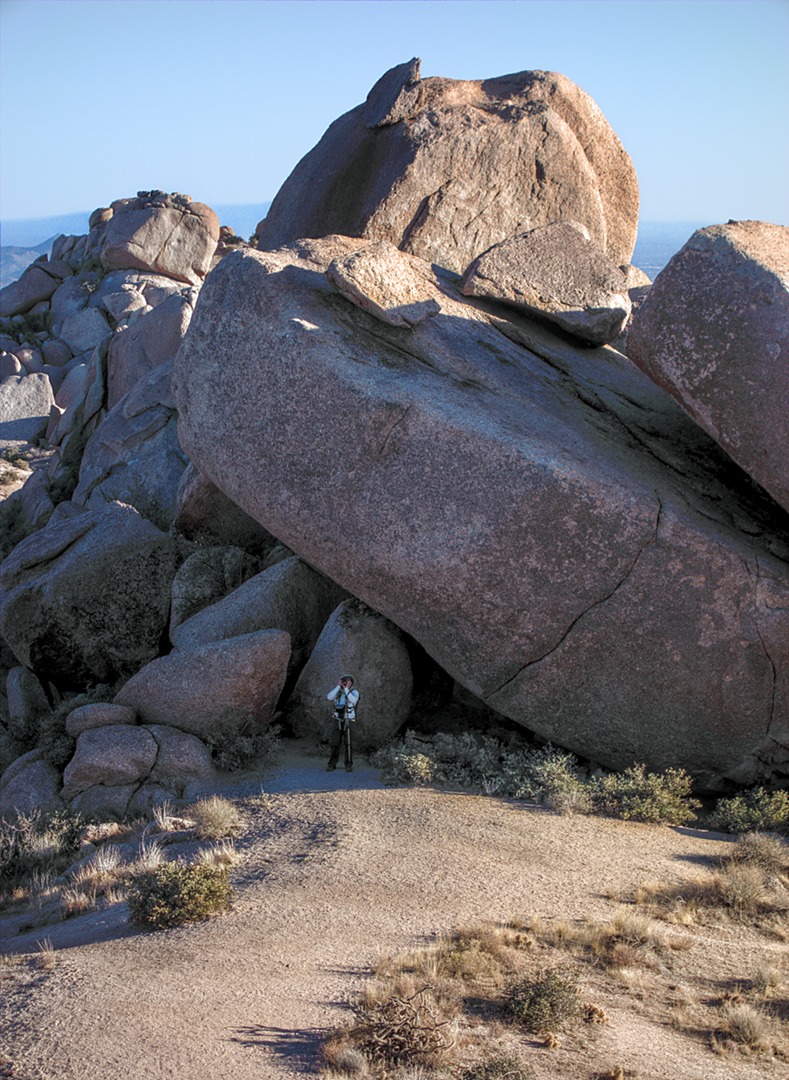 A photo of me with Tom’s Thumb in the background: 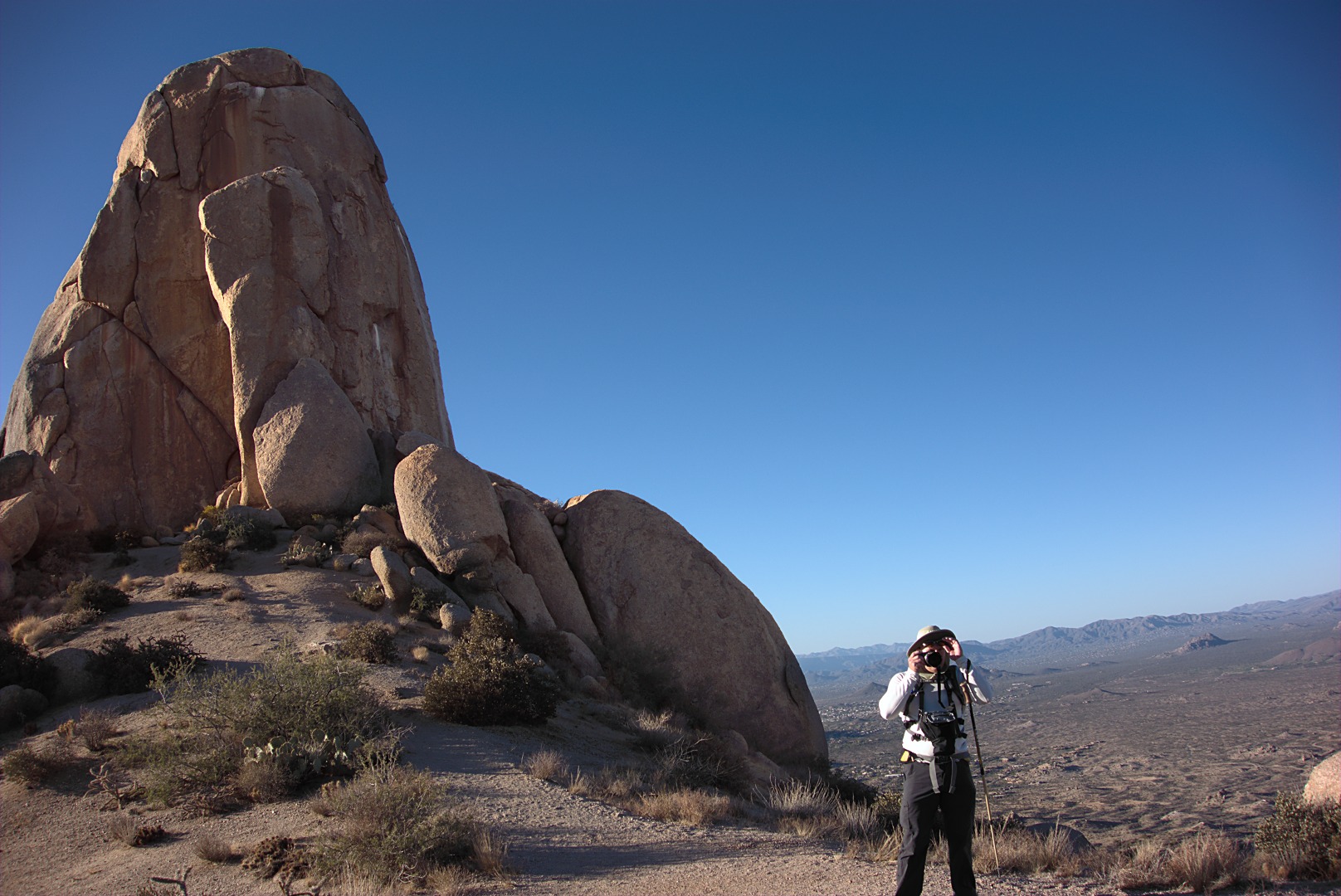 Below is a photo of “Glass Dome”.  I’m not sure how it got its name as it’s not really a dome and it’s made from granite instead of glass.   It’s just off the Tom’s Thumb Trail somewhat before the turn off for the climber’s access trail to Tom’s Thumb proper.  It’s a fairly large formation, but is quite a lot smaller than Tom’s Thumb.  (Tom’s Thumb requires two ropes to descend (rappel) from the top.  Glass Dome only requires one.) 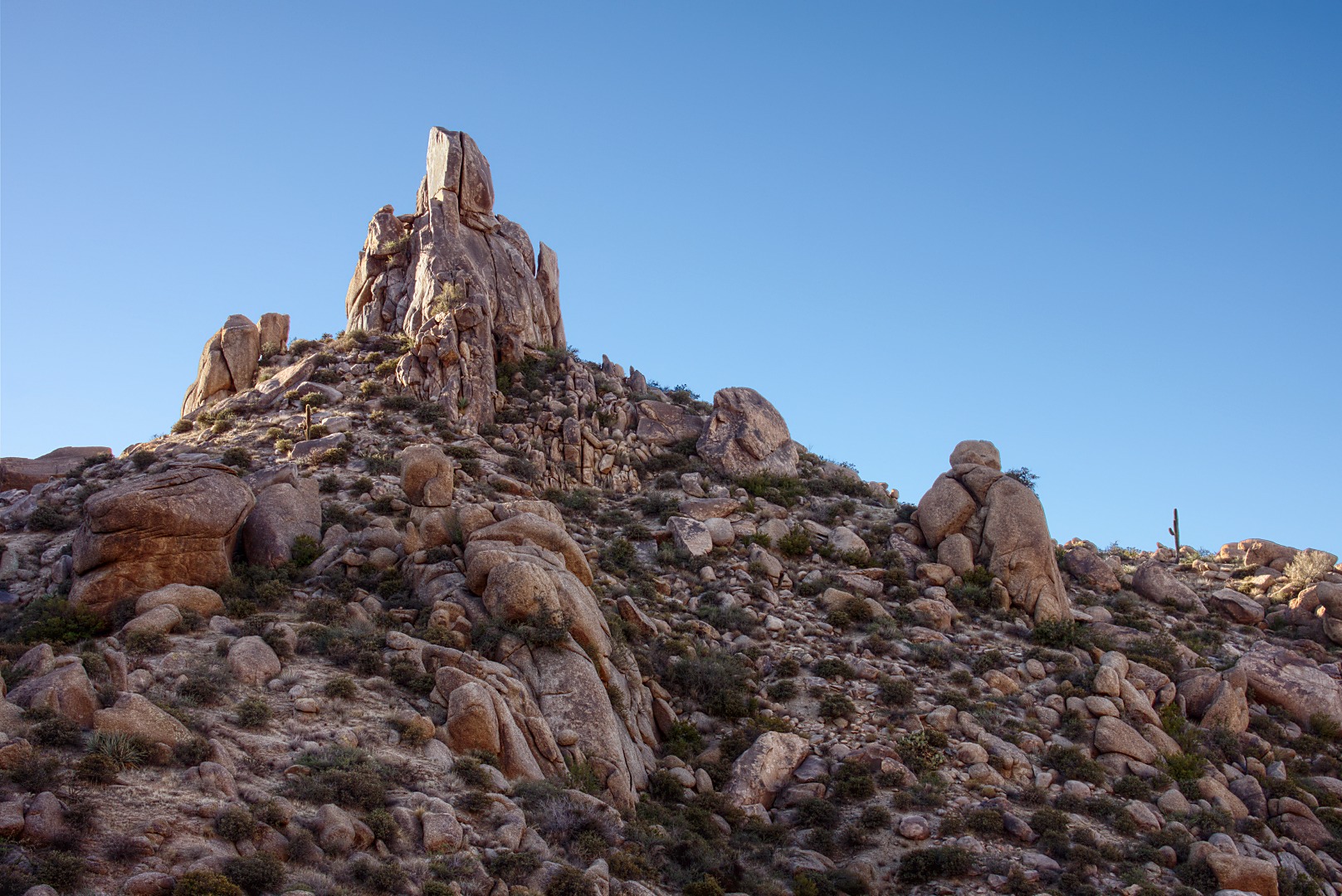 Tiger on a Ladder