Janet, Bob, and I hiked up to Tom’s Thumb for Friday’s hike.  The route we took is a bit different than that used by most folks to get there.  We started off on the Tom’s Thumb Trail, but…

After half a mile, we turned off onto the climber’s access trail leading to Fort McDowell, Half and Half Wall, and the Lost Wall. 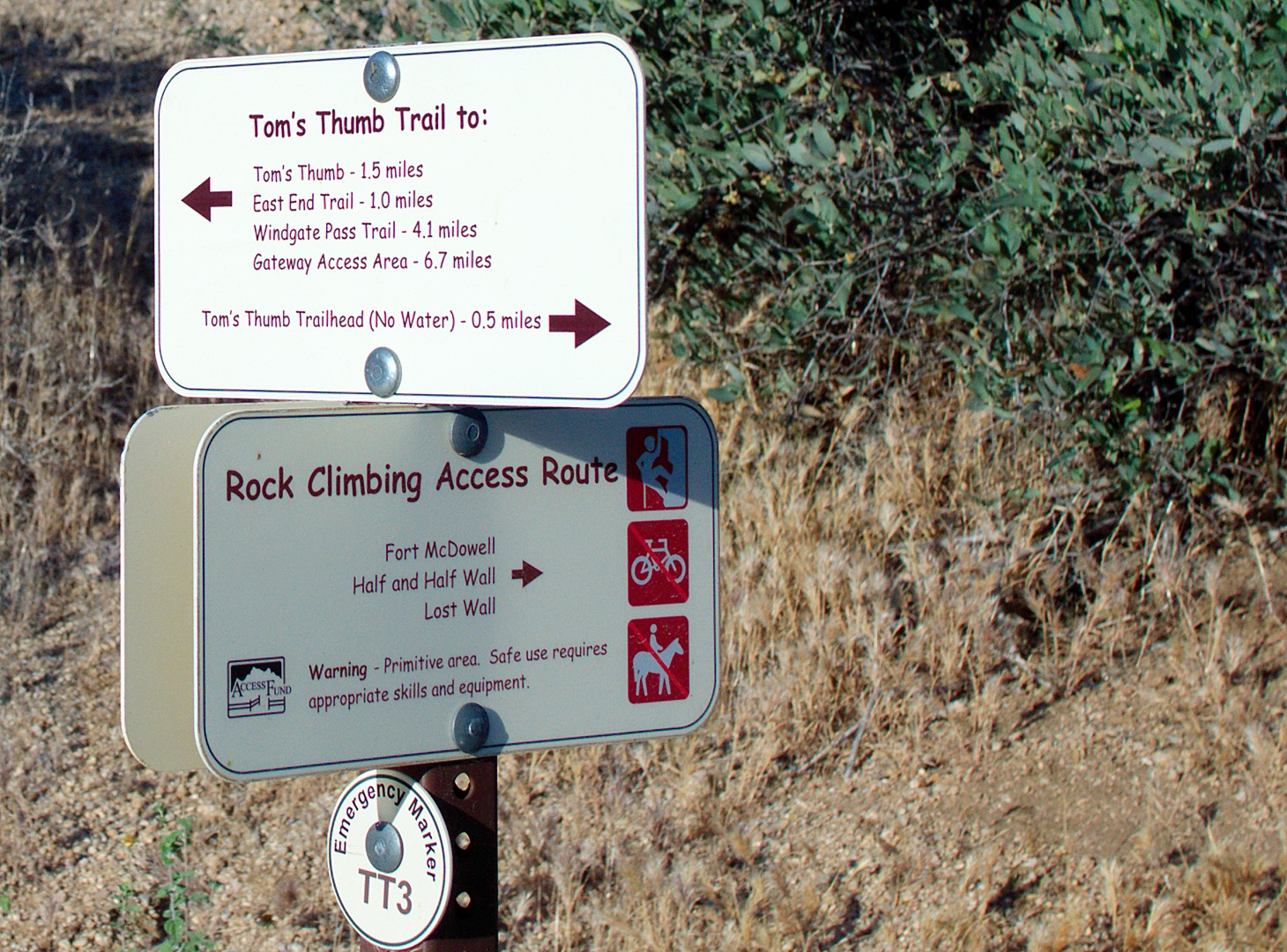 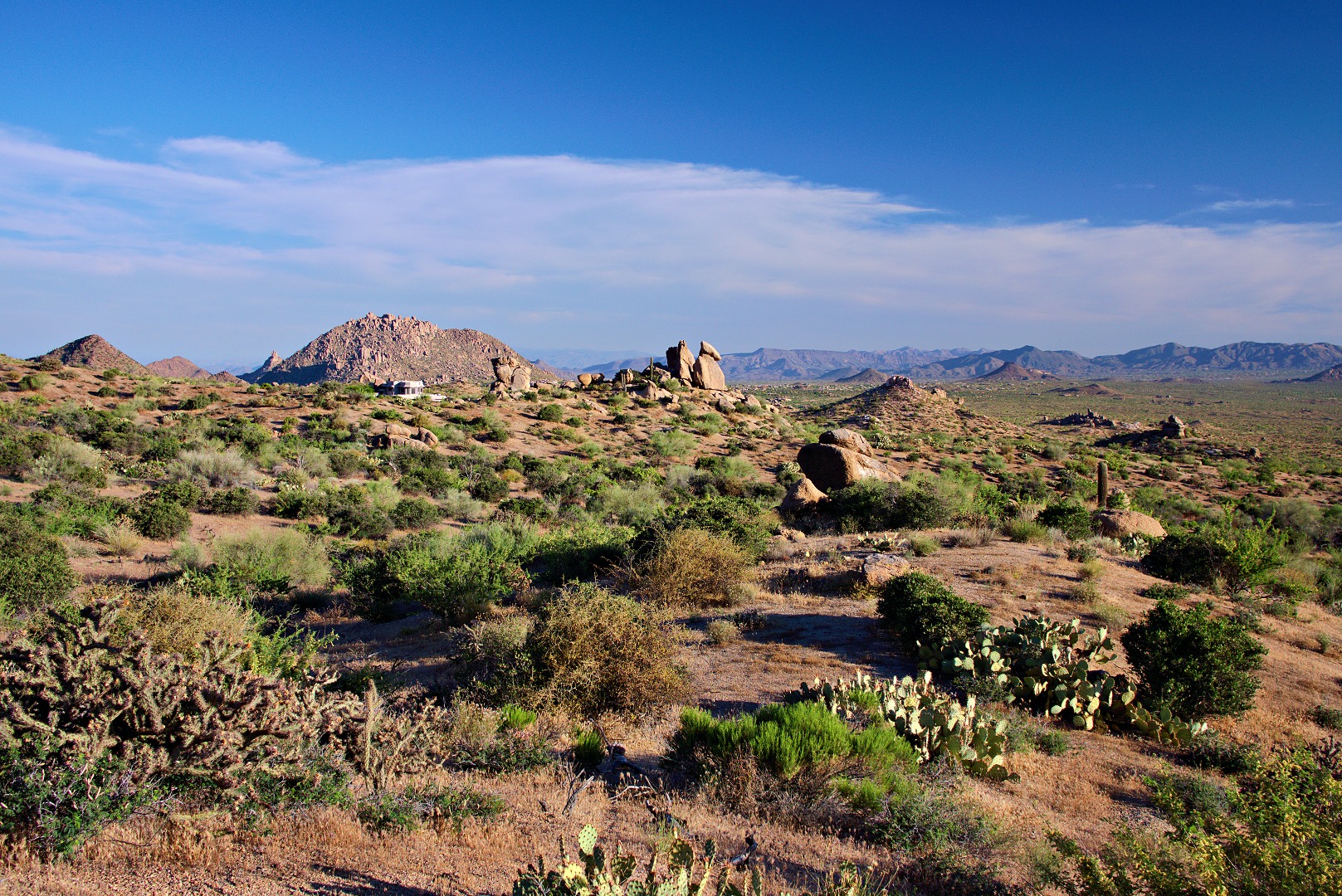 We passed this structure along the way.  It’s not clear what it was used for.  I don’t recall there being an opening in it and it’s too tall for cattle to be able to feed from it. 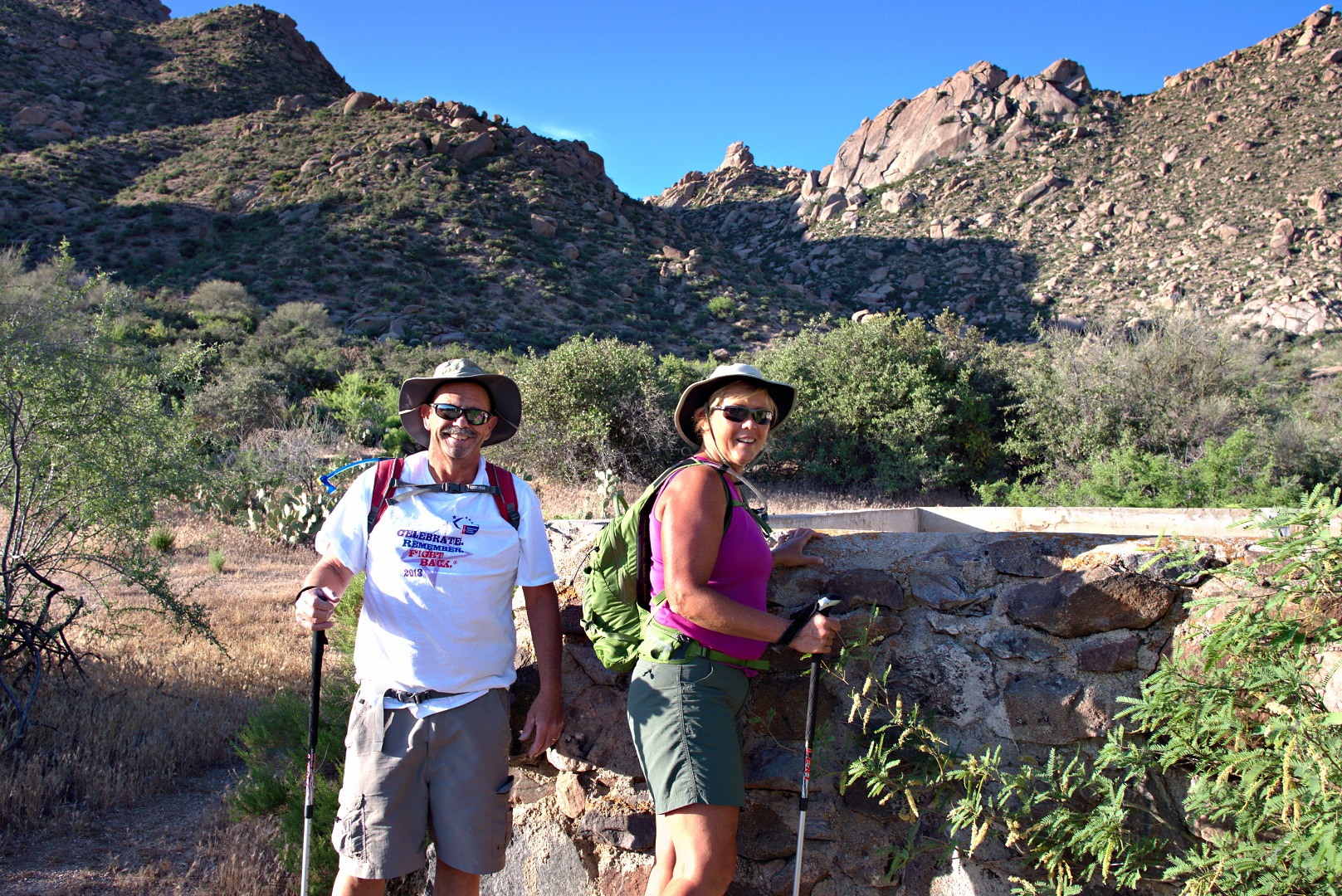 We passed some interesting rock formations, both small and large on the way up.  I like the one to the left with the hole in the top. 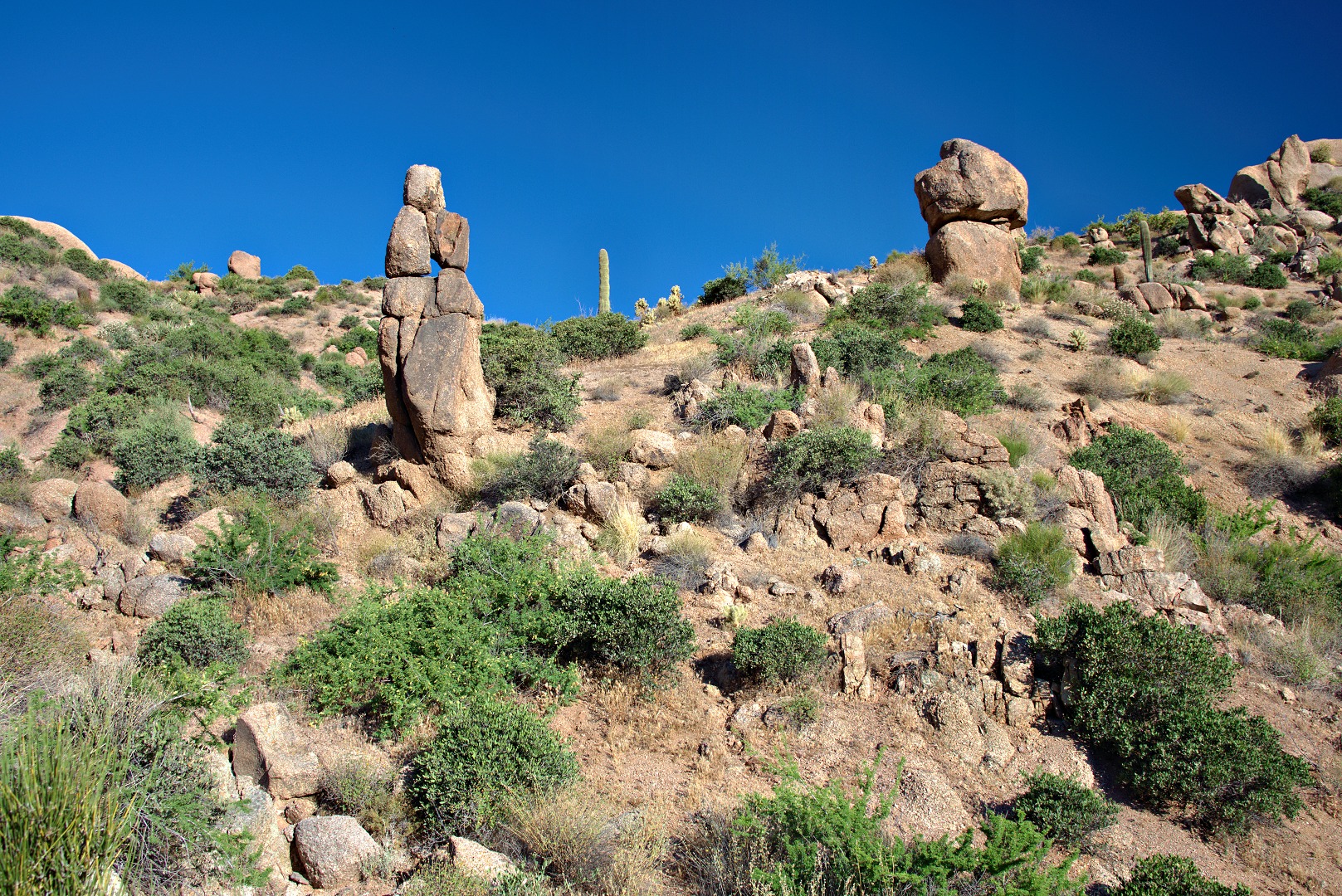 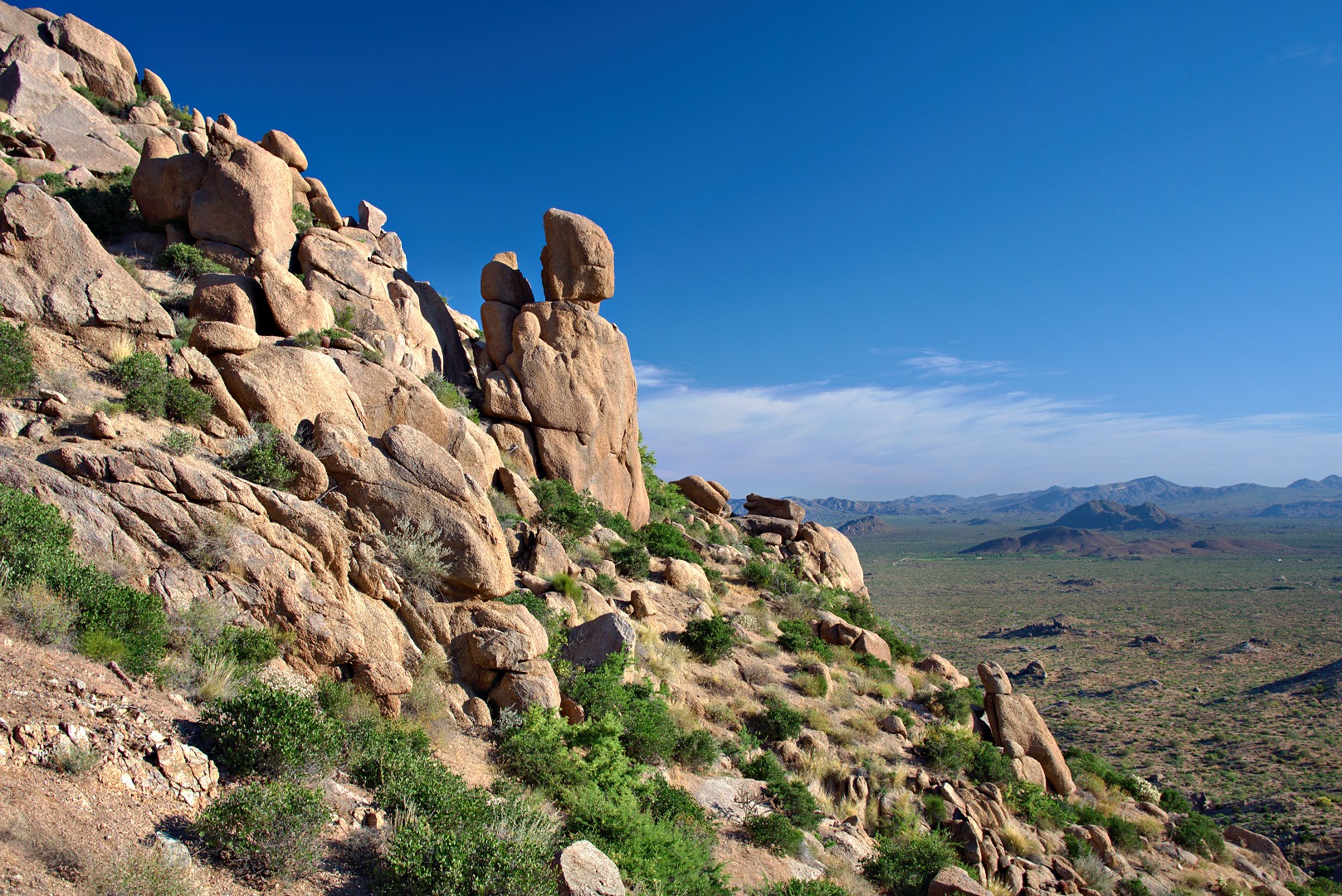 We saw an old trail leading up to the pass just left of this small hill, but we did not explore it.  (The portion of the path in the photo looks good, but getting to it isn’t especially easy.) 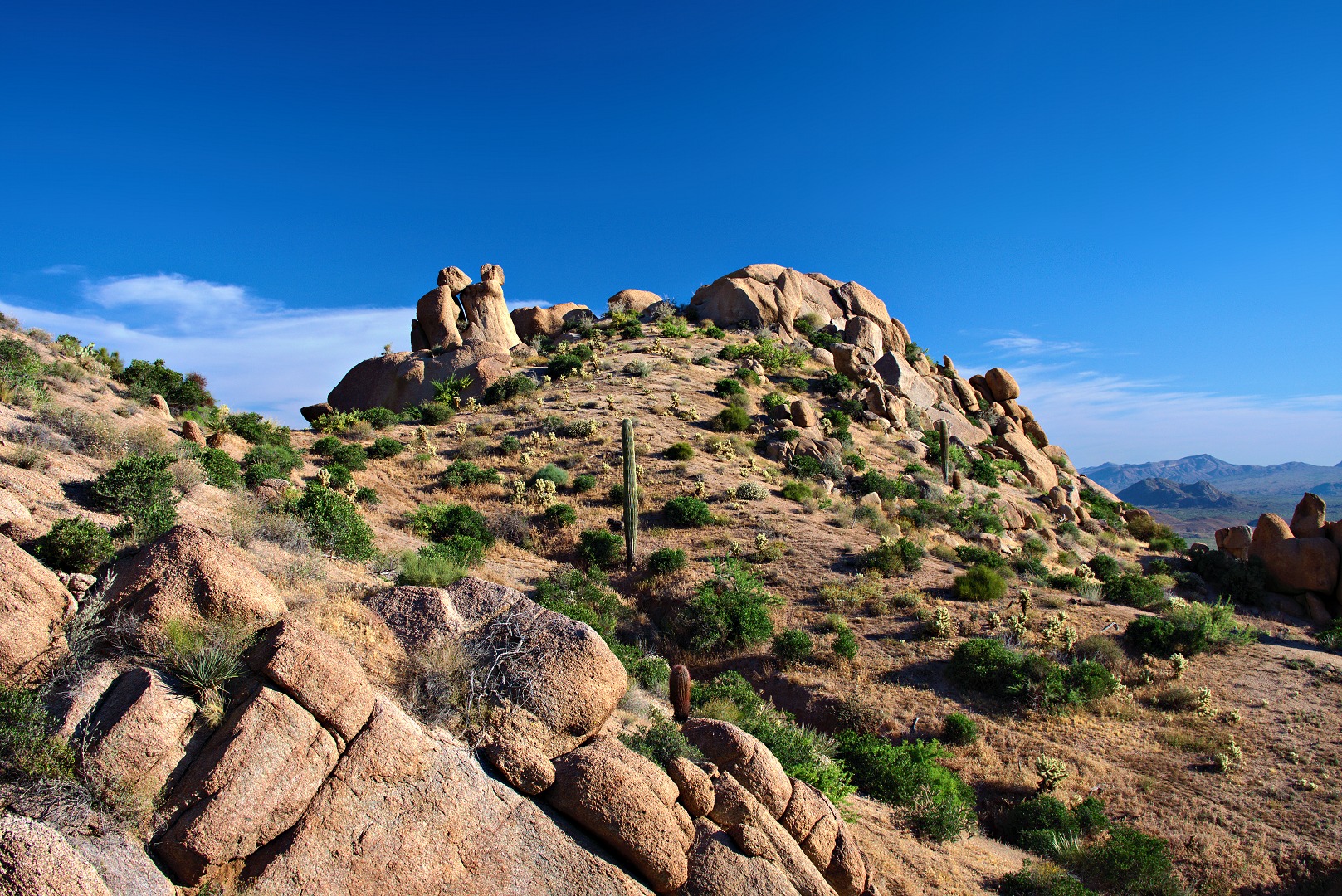 Bob and Janet waited for me while I scrambled up to take a look at the Lost Wall.  From that higher vantage point, I got this photo of Troon and Pinnacle Peak.  I got a photo of the Lost Wall too, but it wasn’t especially scenic from where I stood well above it.  Marilyn and I tried finding the Lost Wall and the Half and Half Wall many years ago, but I don’t think we ever found them. 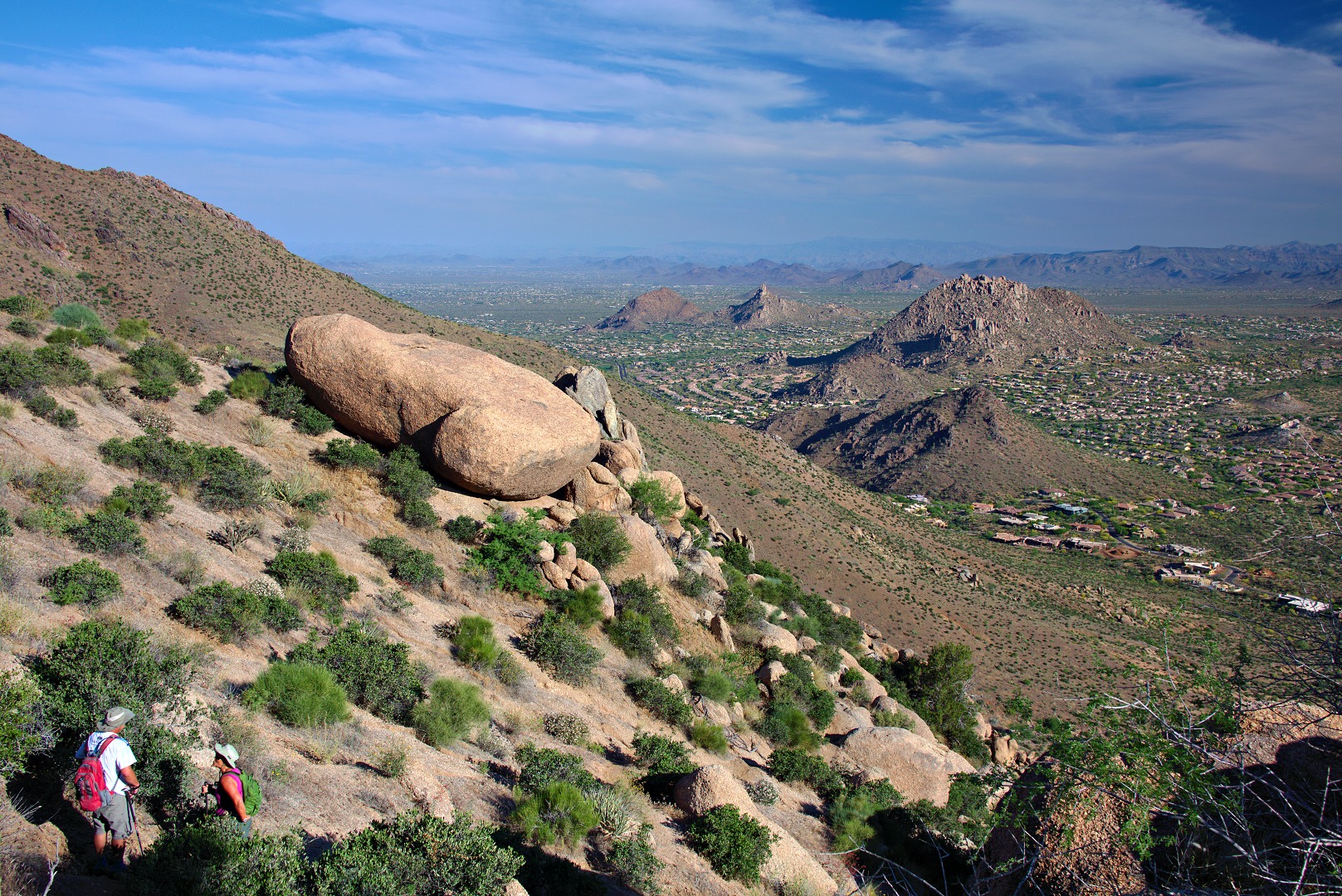 We finally got up to the ridge.  The trail to the ridge is very steep, loose in spots, and occasionally difficult to follow.  I had hiked it before and knew which ways not to go this time. 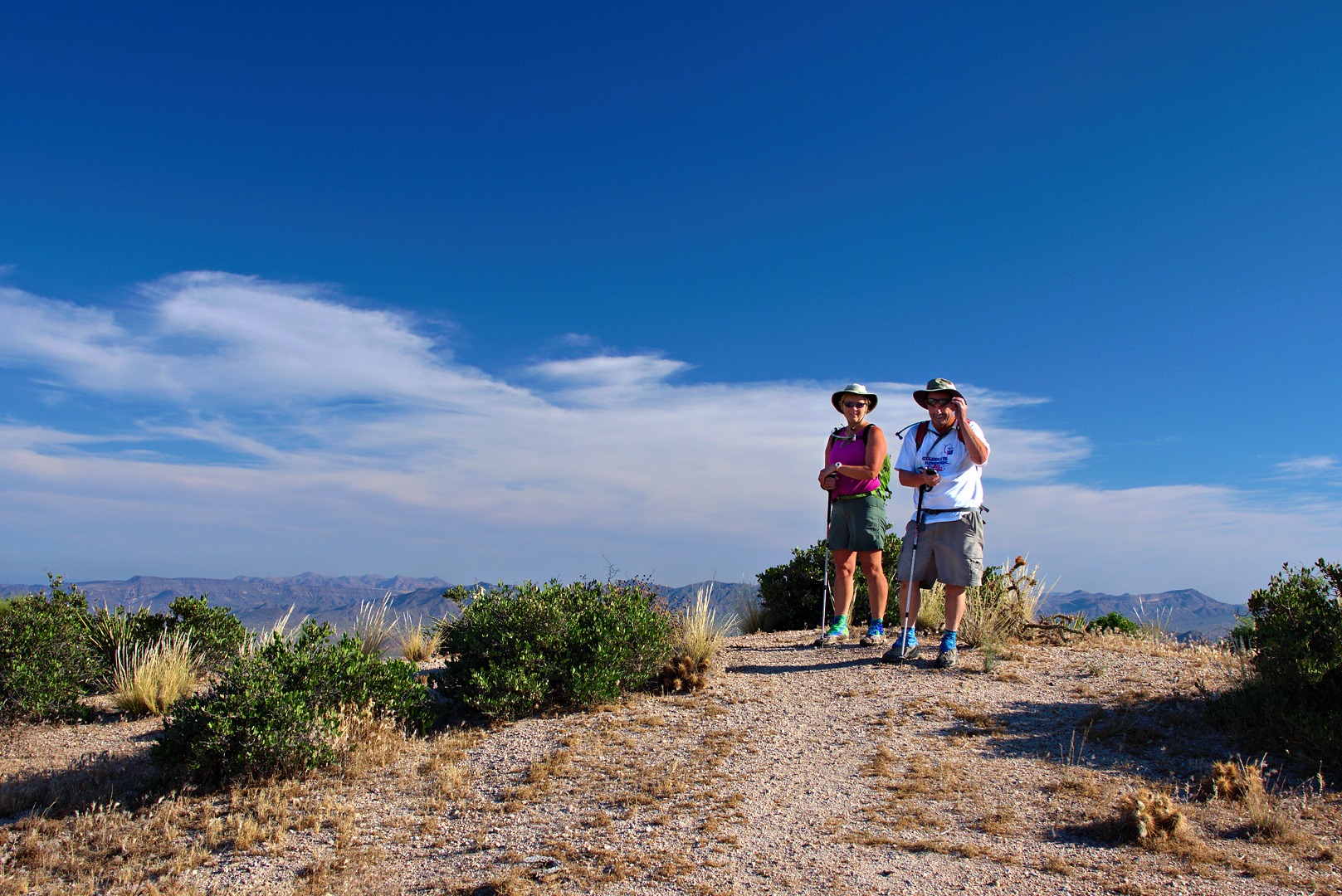 We found this interesting rock formation on the west side of the ridge: 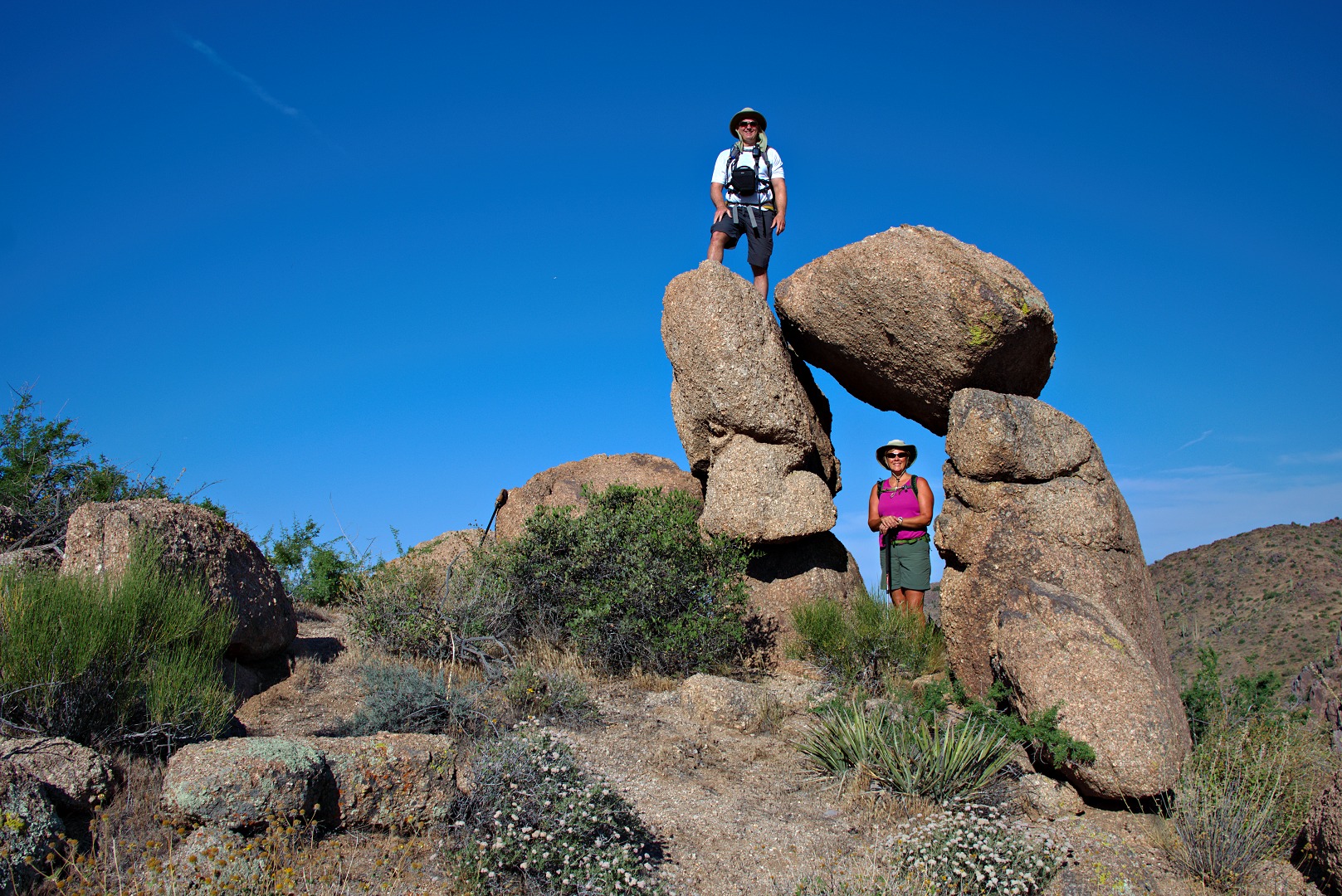 A view to the north: 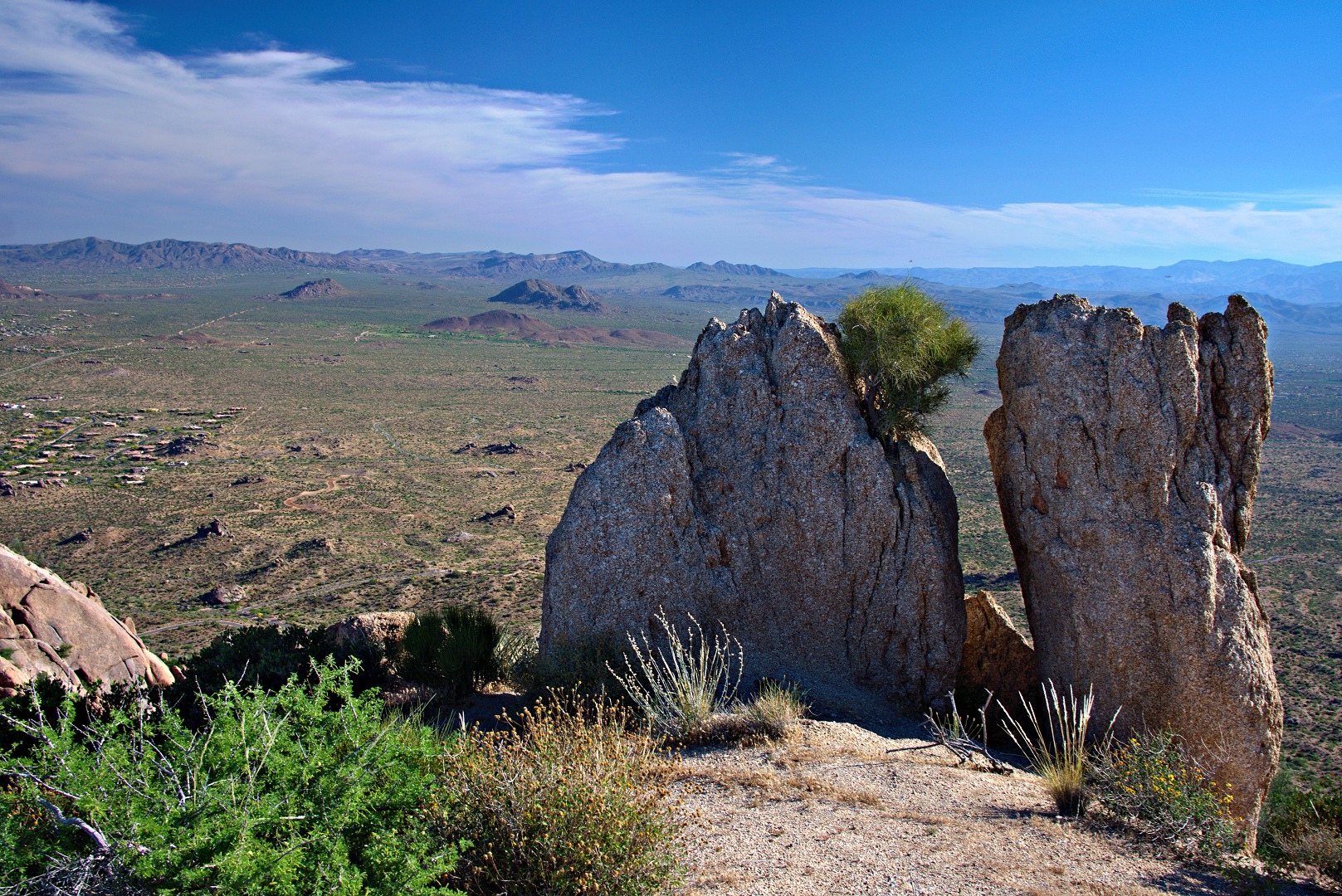 The East End, the top of Gardener’s Wall, Weaver’s Needle, Glass Dome, Tom’s Thumb, and the Rist are all visible in this photo.  The Rist is the large pile of rocks at the far right in this photo. 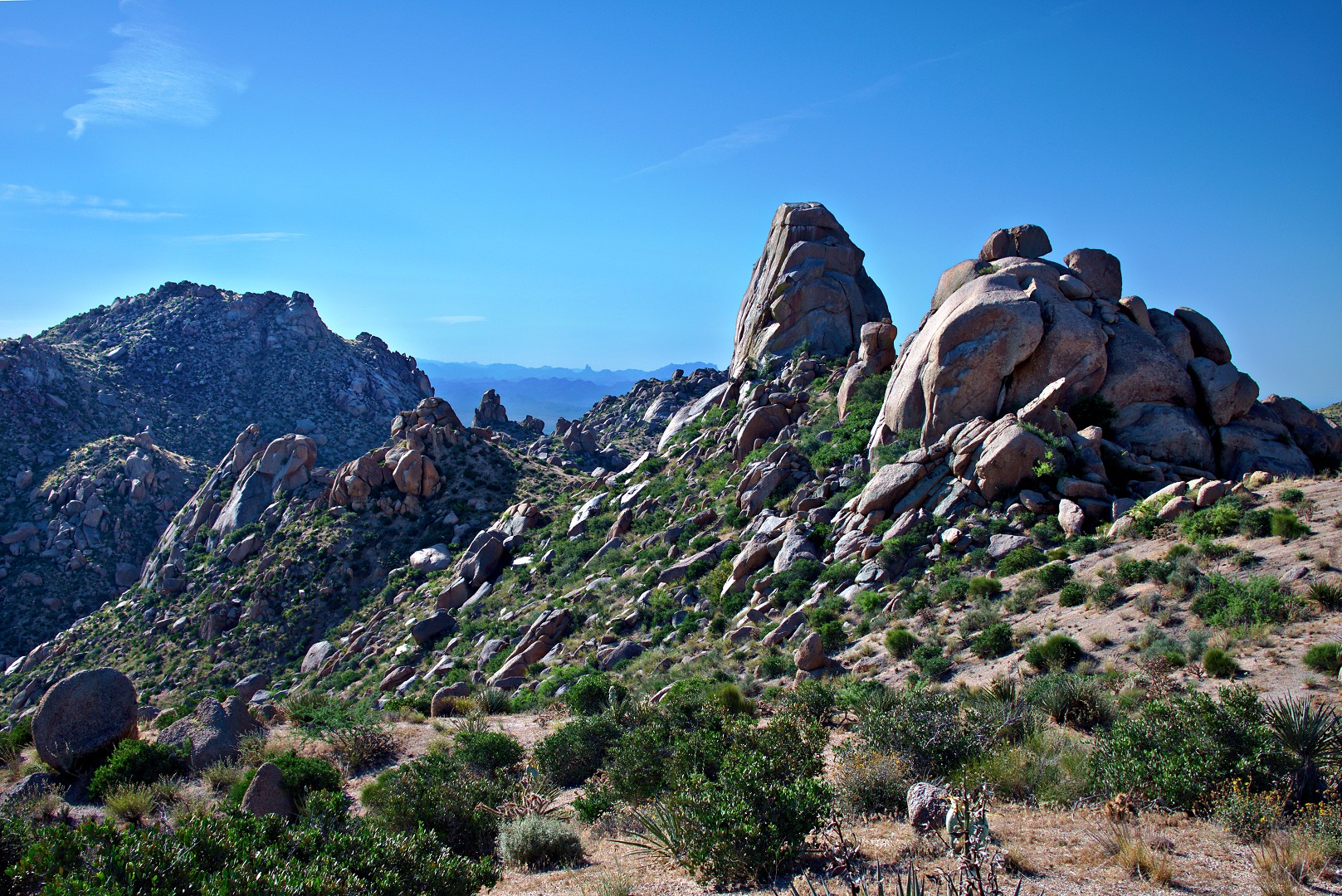 A closer view of Tom’s Thumb and The Rist: 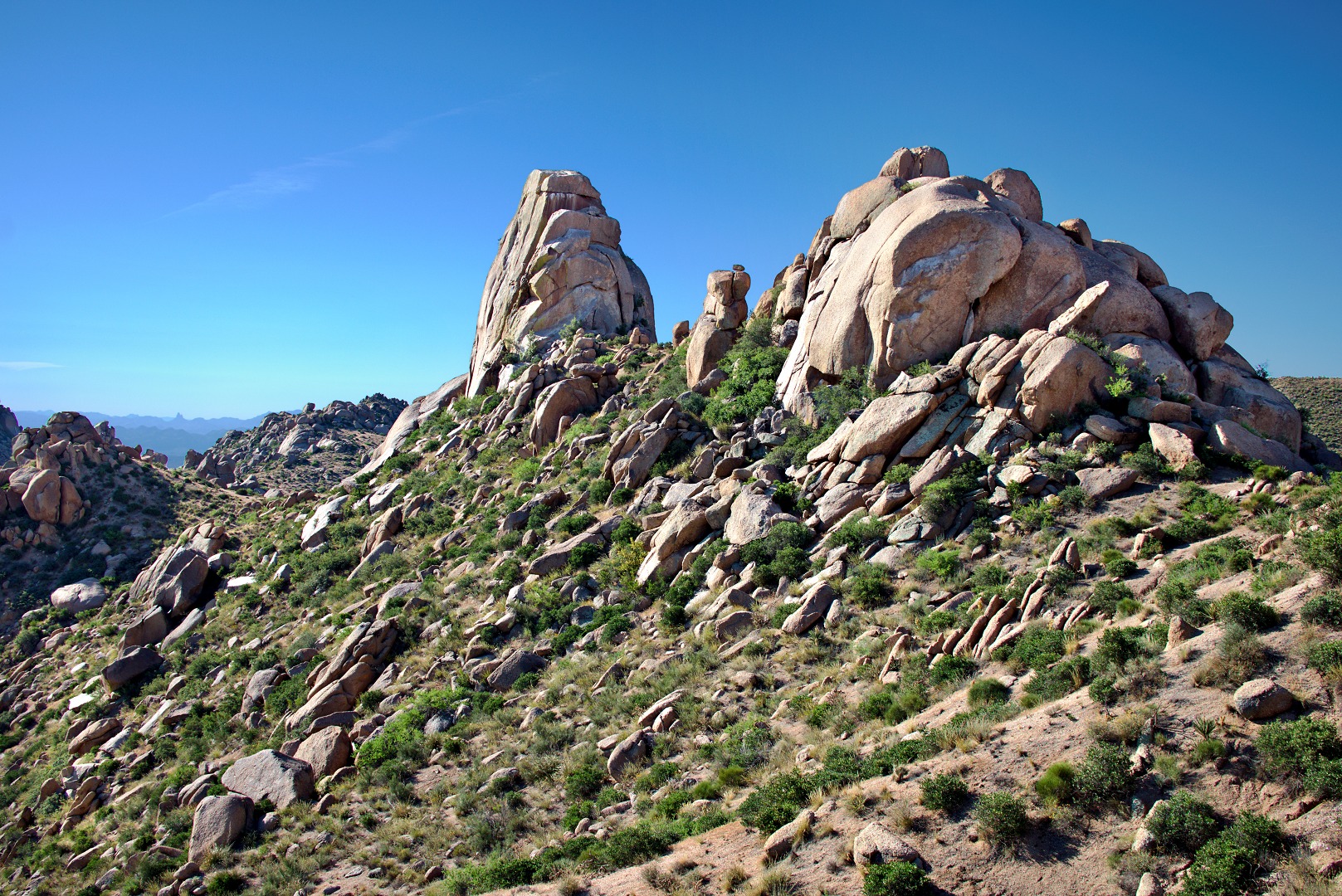 The trail continues along the ridge and then descends somewhat on the west side of The Rist.  The trail then gets confusing, but Bob did some exploration and found a good trail that lead us to the northwest side of Tom’s Thumb.  The class 4 route aptly named West Corner can be seen in this photo.  It’s the easy looking ramp up leading up and rightward in this photo.  This was my very first climb in Arizona back in the late eighties  It was also my second time rappelling.  (My first time rappelling was off of a railroad trestle in Iowa.   We were getting set up to rappel of the bridge when we heard a train coming.  We ran towards the train and jumped off the bridge only slightly before it got to the bridge!) 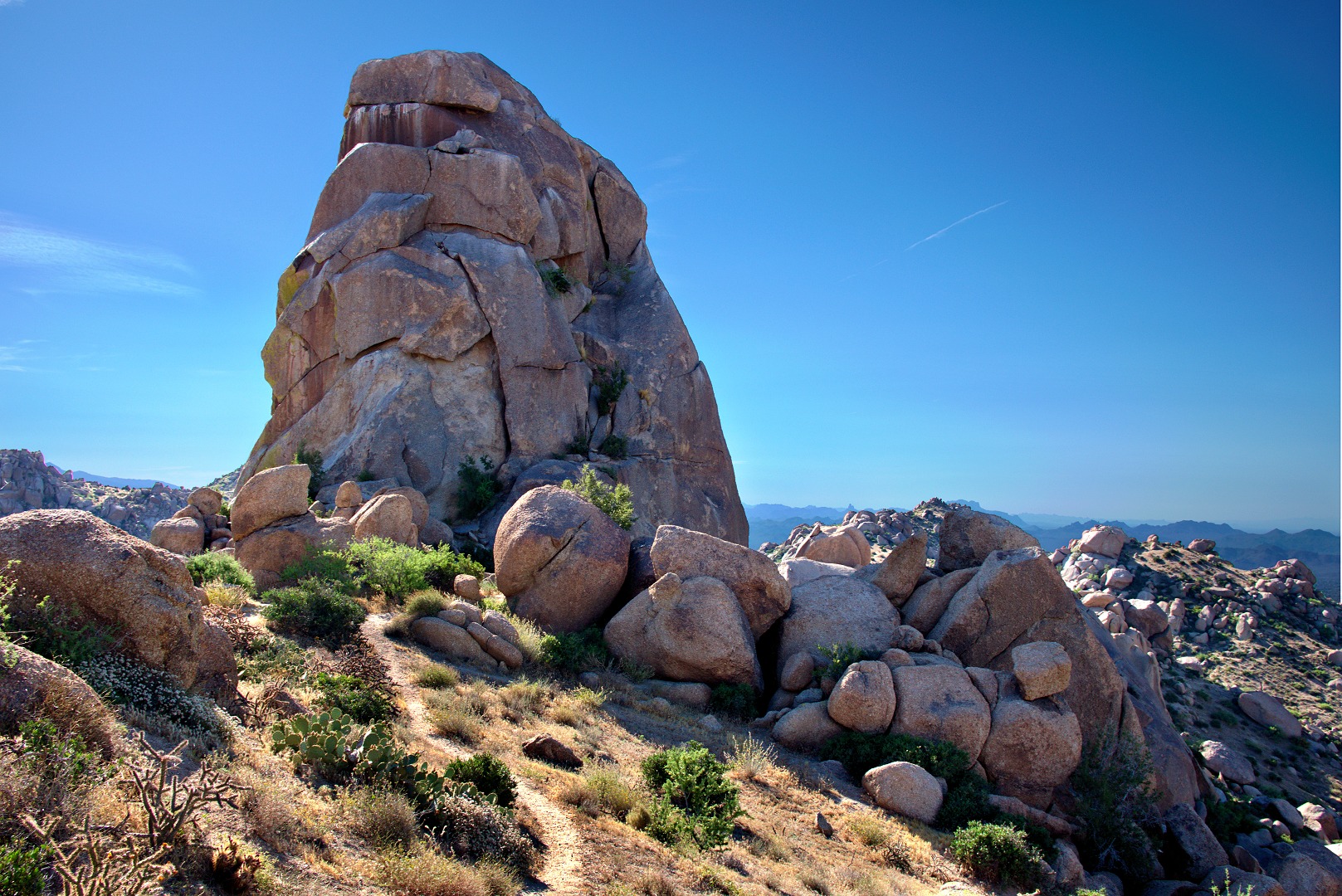 A rock formation to the north of Tom’s Thumb: 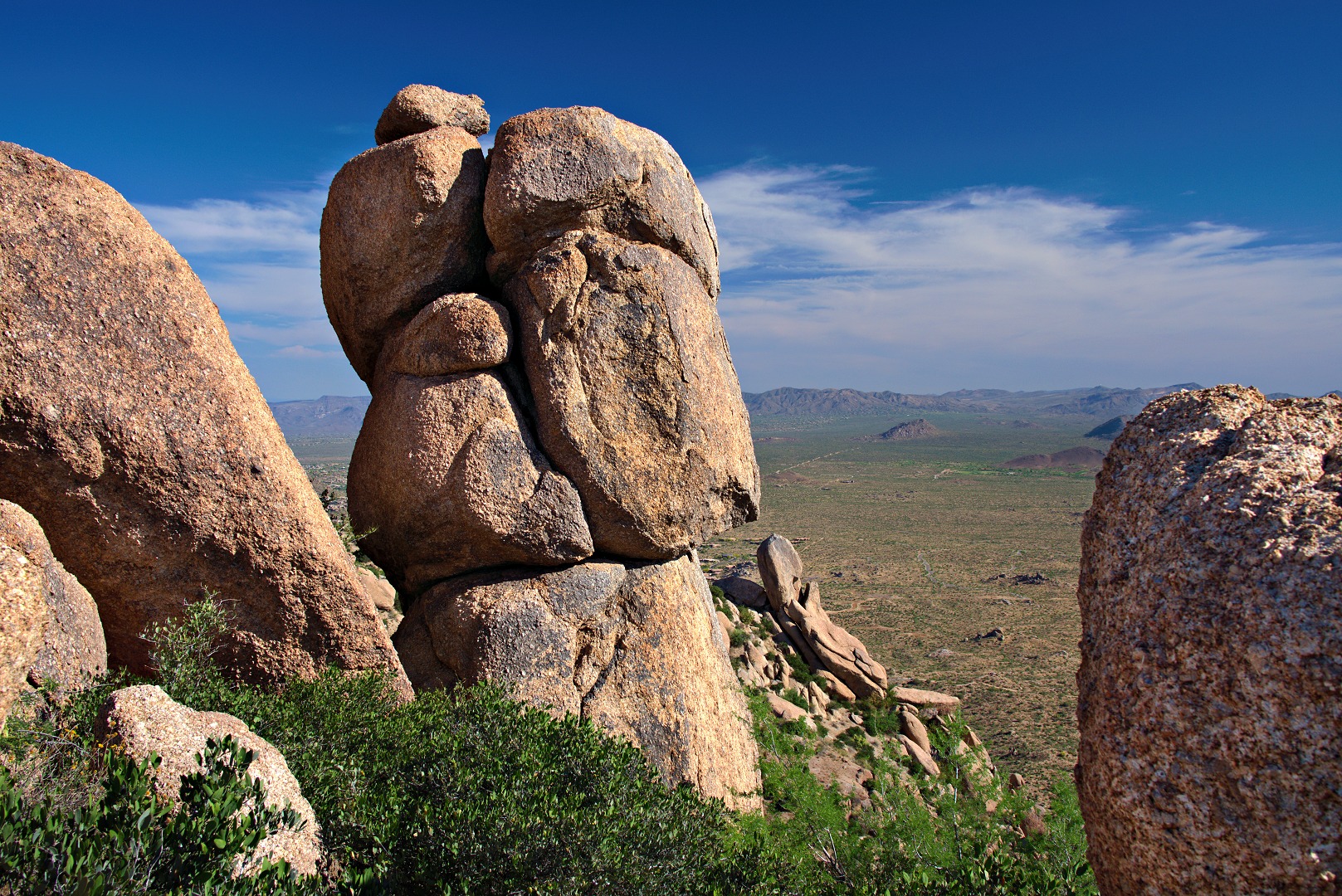 Another view of the north (or maybe still northwest?) side of Tom’s Thumb.  My vantage point is northeast of where it was in the earlier photo. 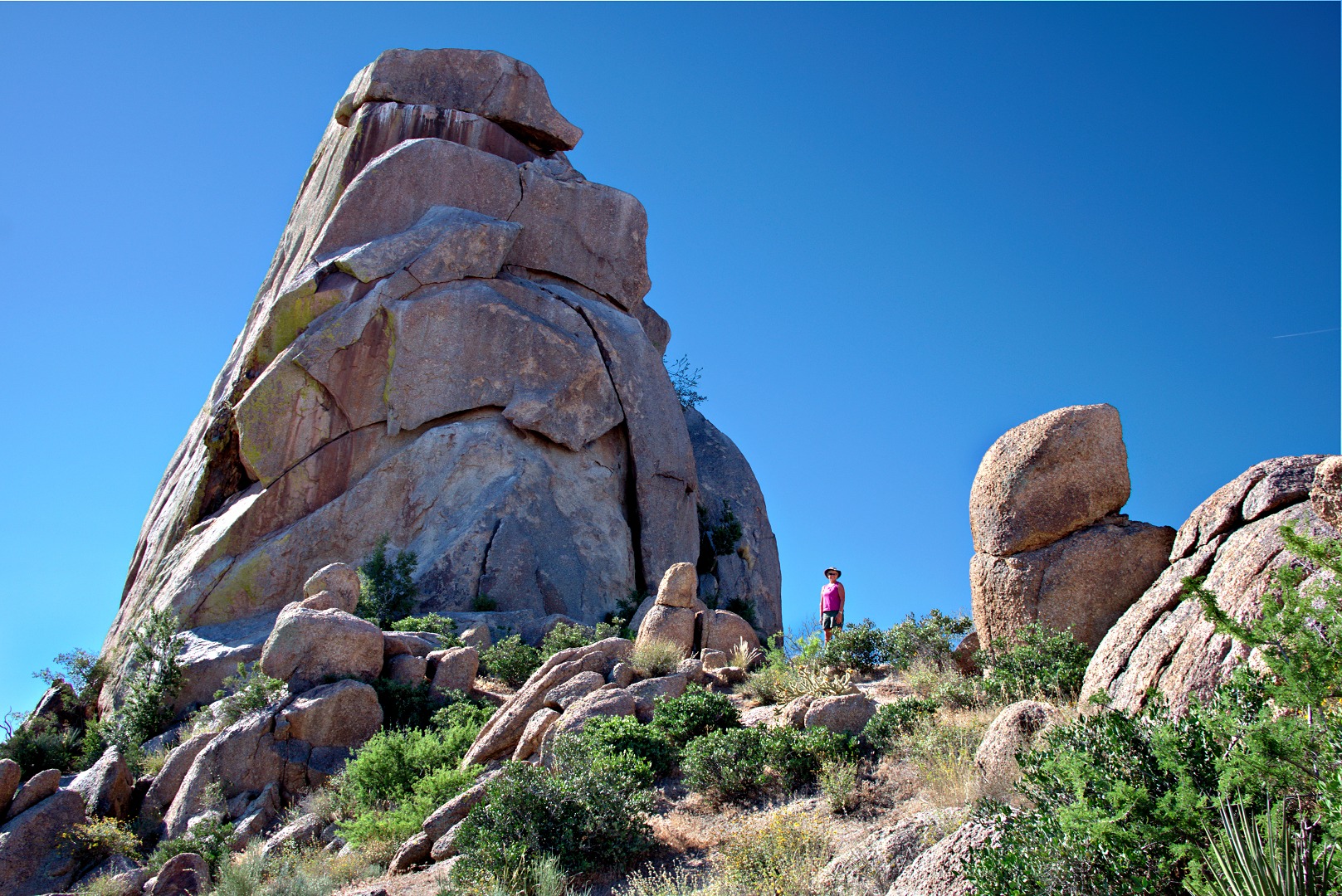 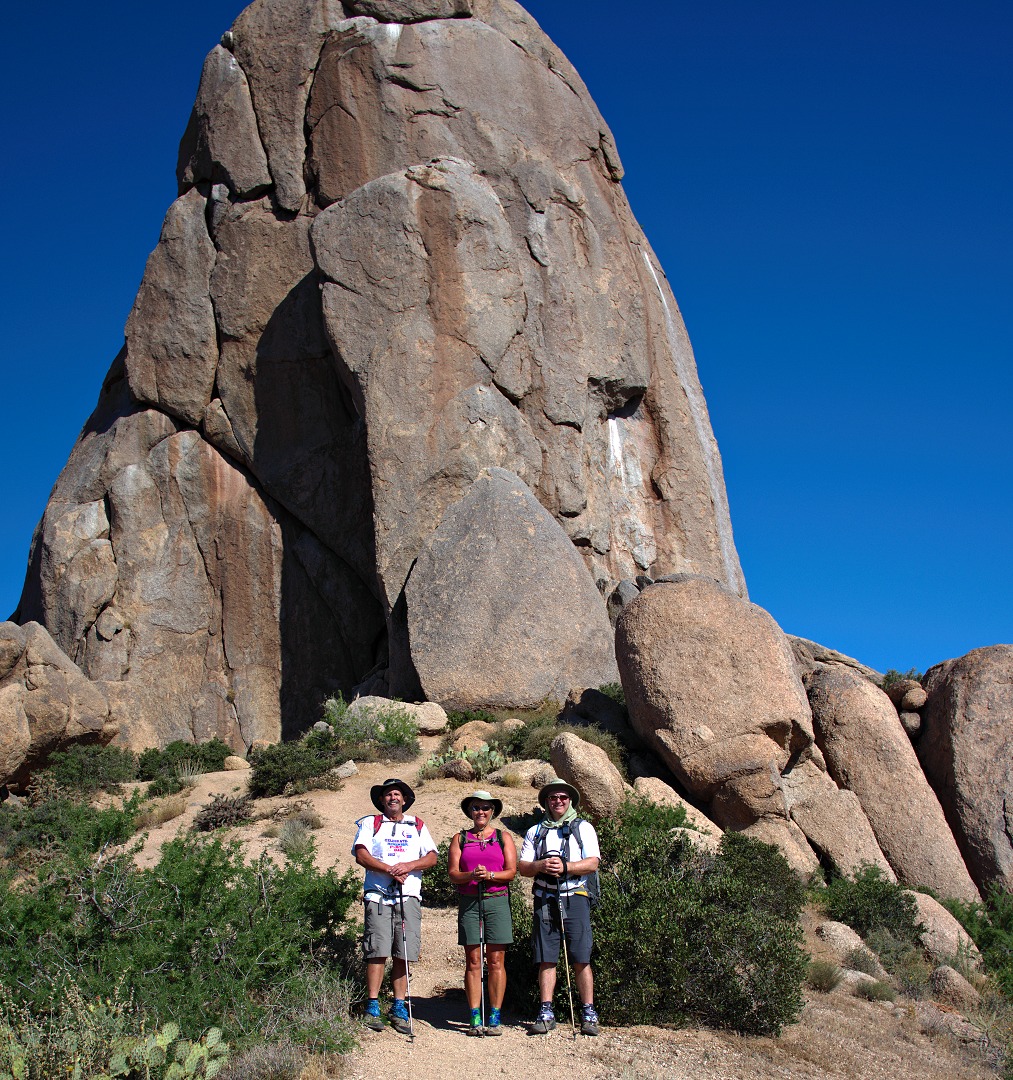 We ended up hiking the trail off to the left in the photo below.  It’s another access trail that leads to the top of Gardener’s Wall. 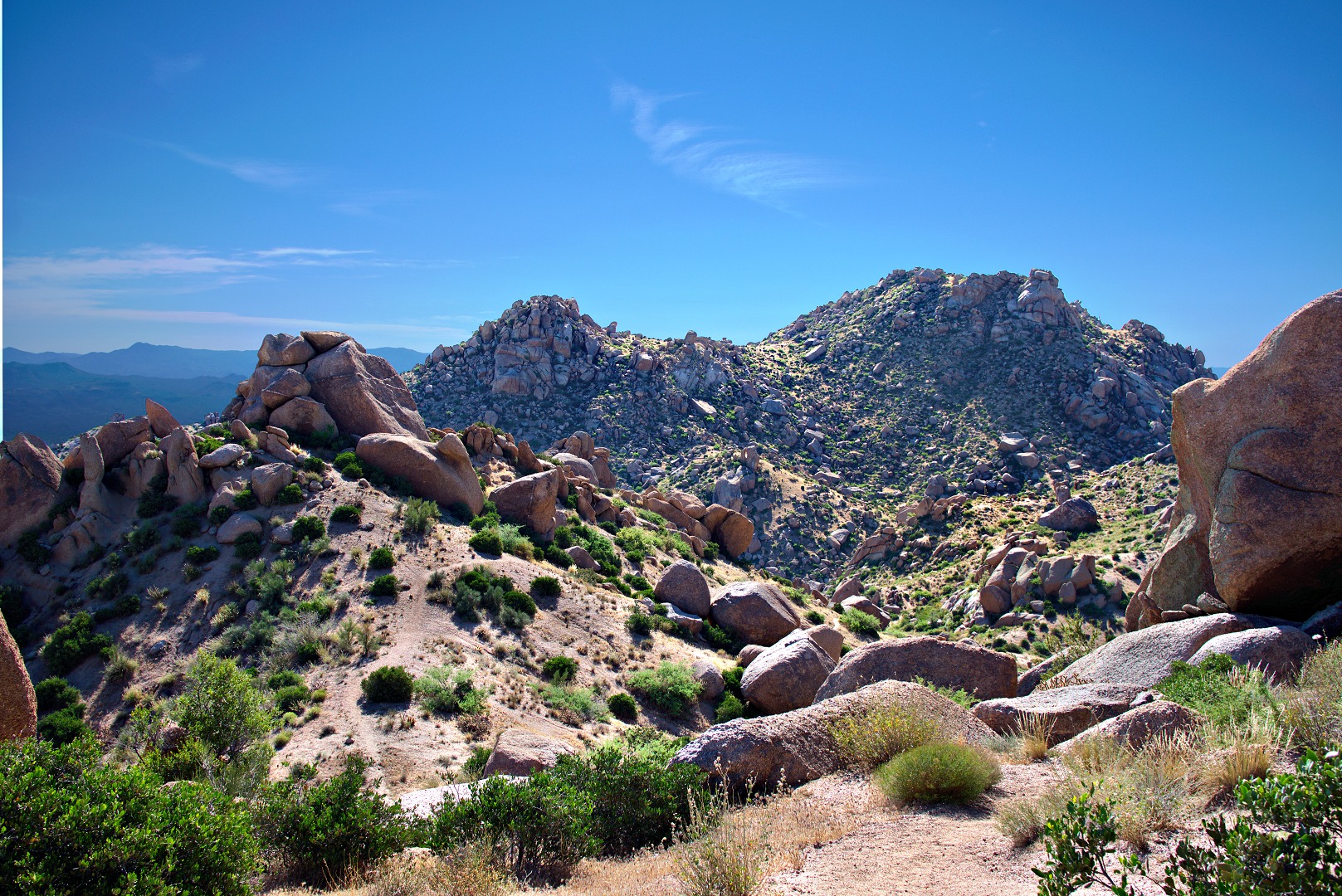 A look back at Tom’s Thumb from the trail leading over to Gardener’s Wall: 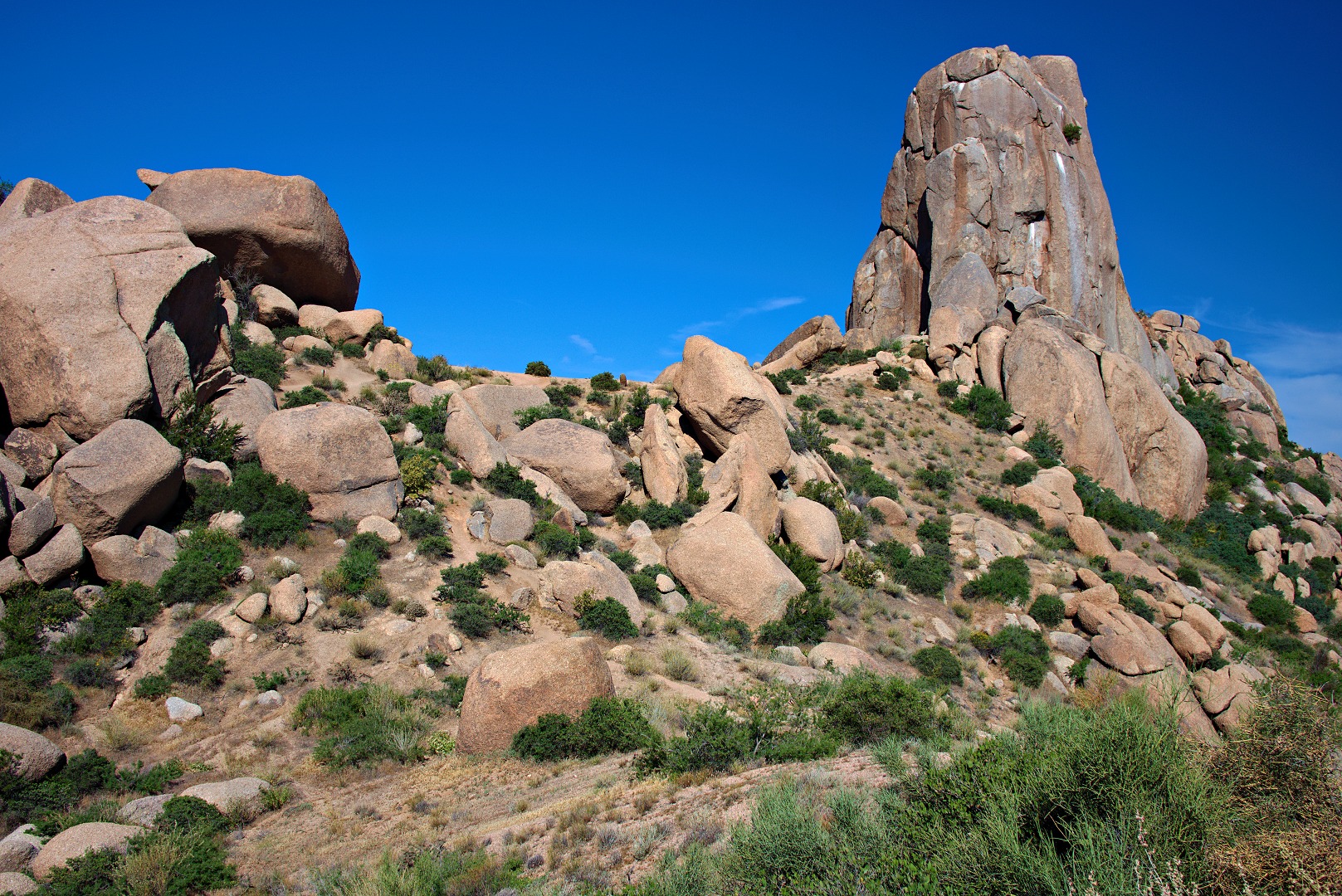 We encountered a sign which showed us the way to get to the bottom of Gardener’s Wall. On the way down, we passed this large overhanging rock: 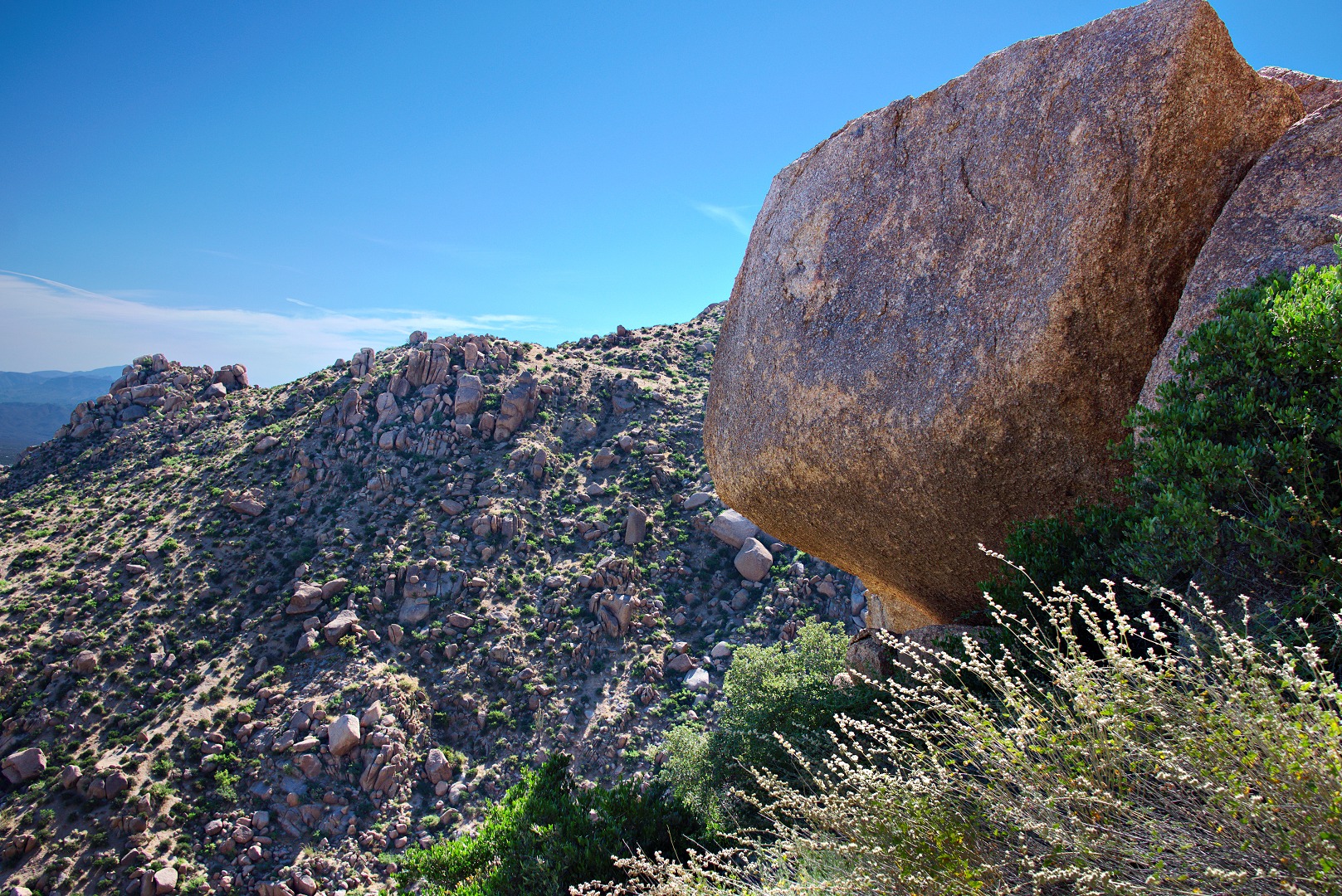 This is (part of) the base of Gardener’s Wall. 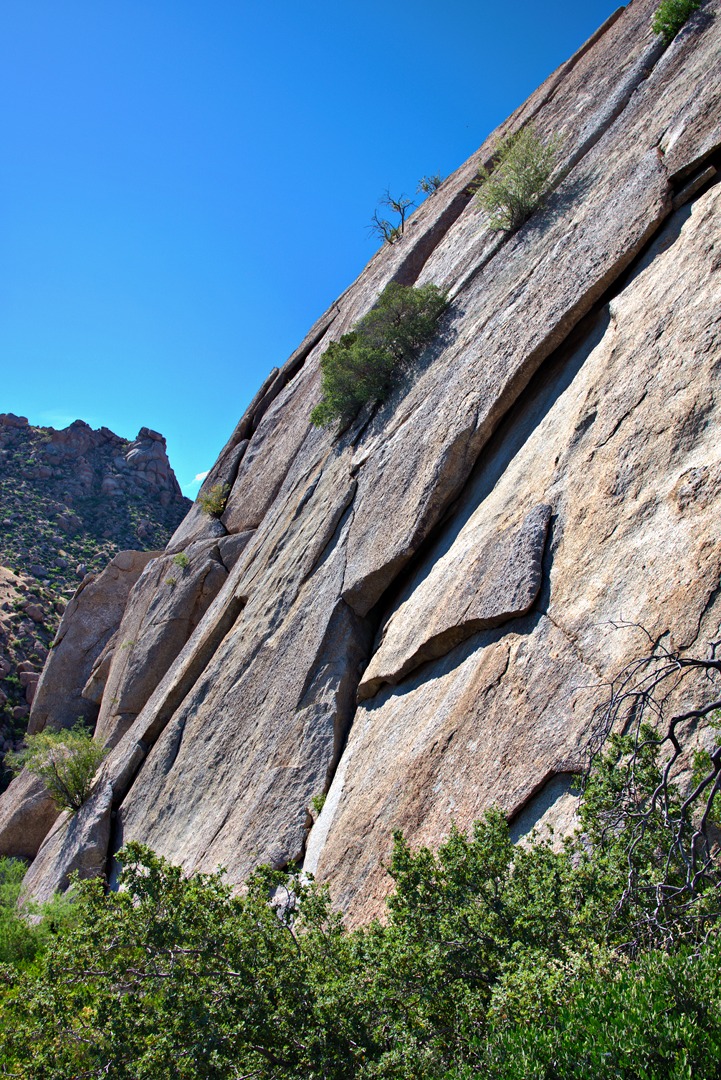 To descend from the base of Gardener’s Wall, you have to crawl down into a “cave”.  It’s not a real cave, but is actually an area covered with some large boulders.  It’s cool and out of the sun though.  The crack with daylight in the photo below is the way out. 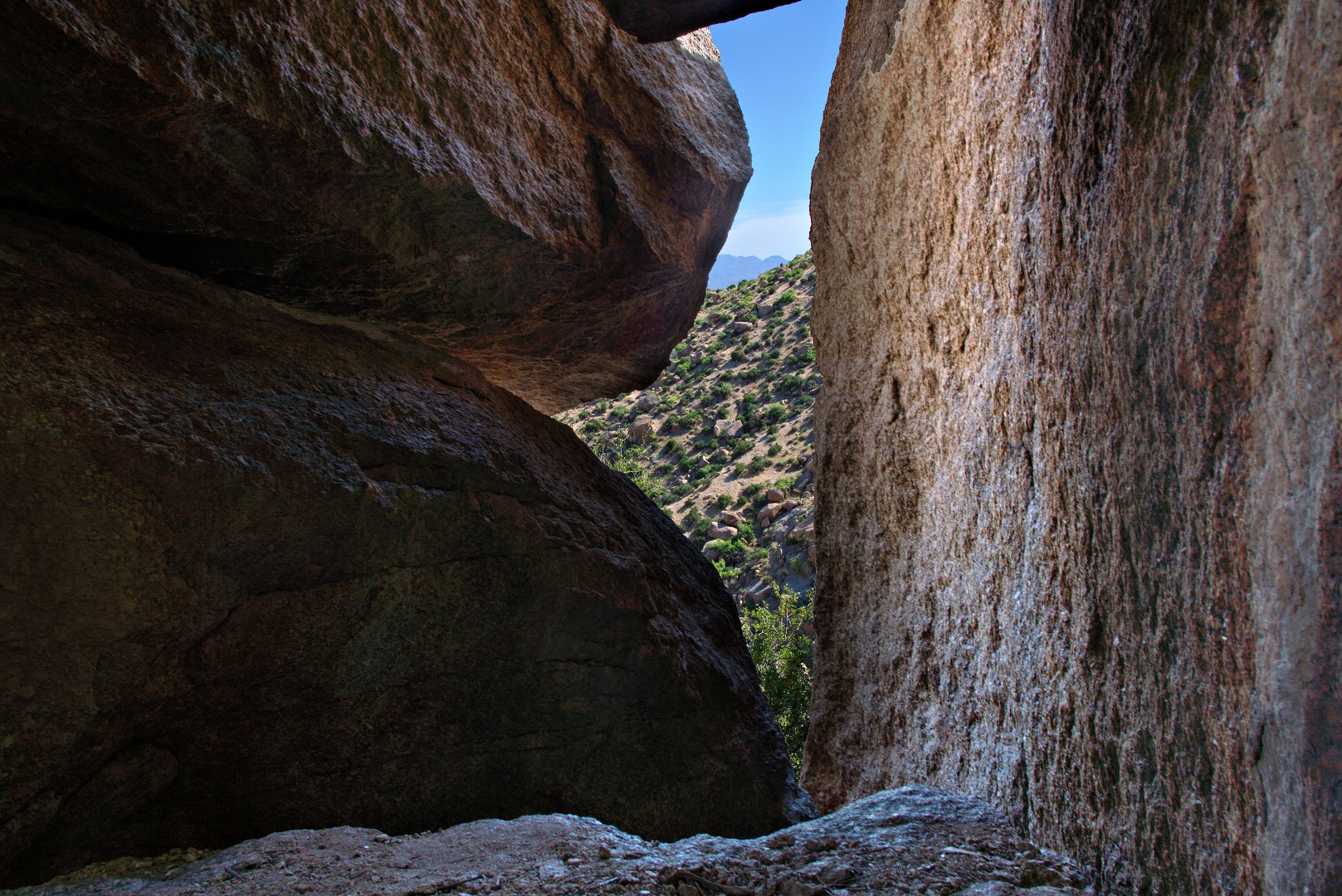 Further scrambling is required after exiting the “cave”: 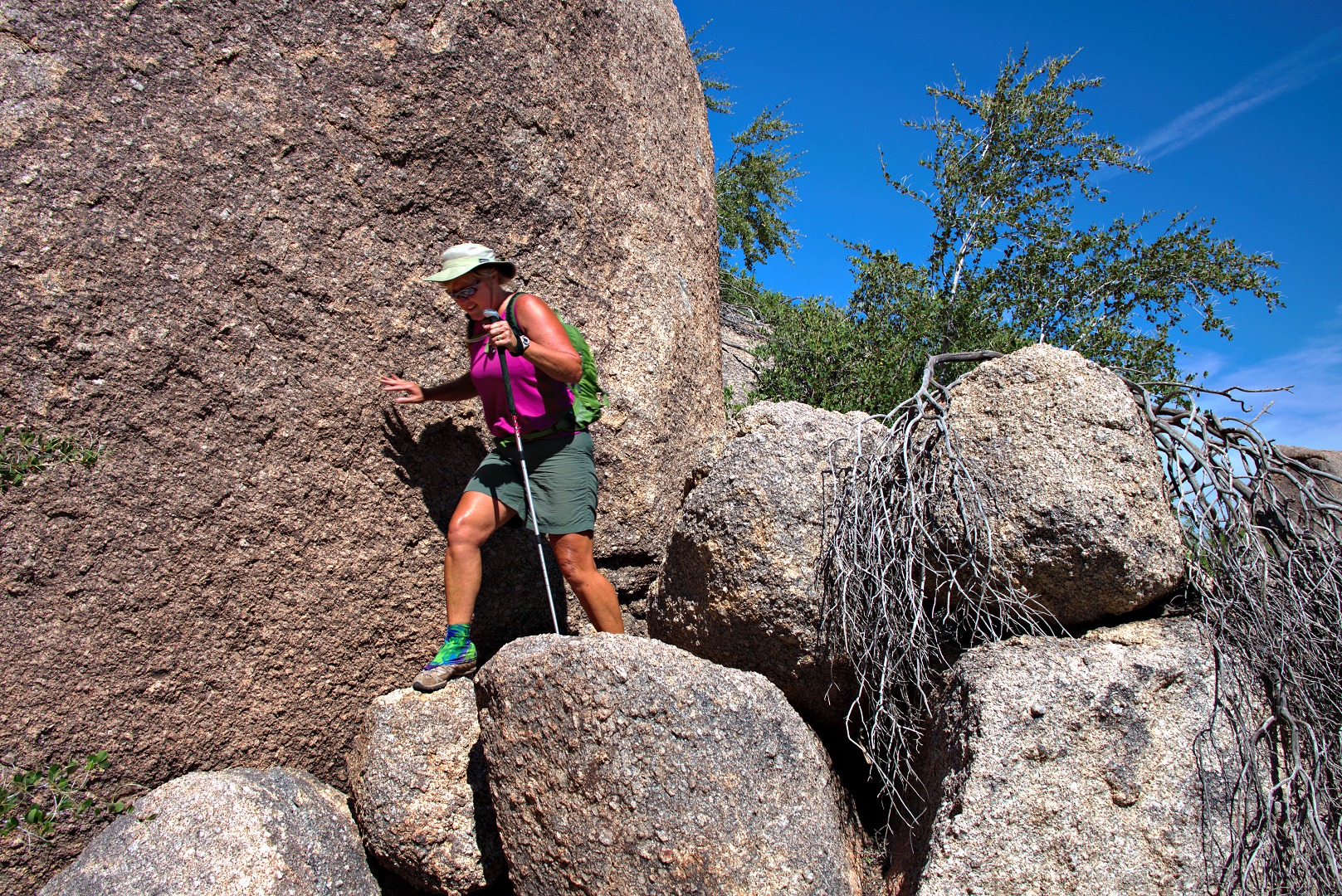 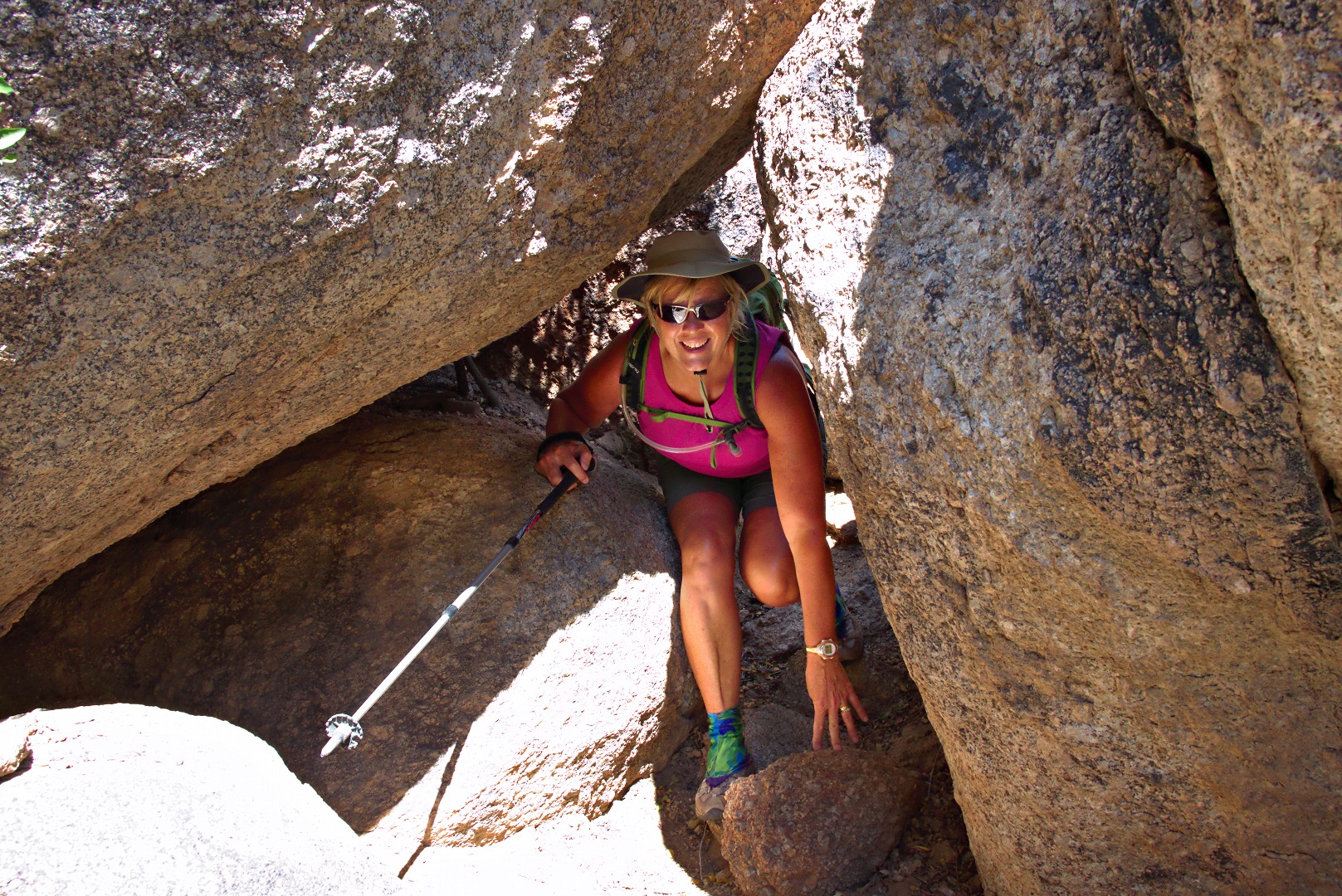 I took this photo of the opposite side of the valley as we were descending from Gardener’s Wall. 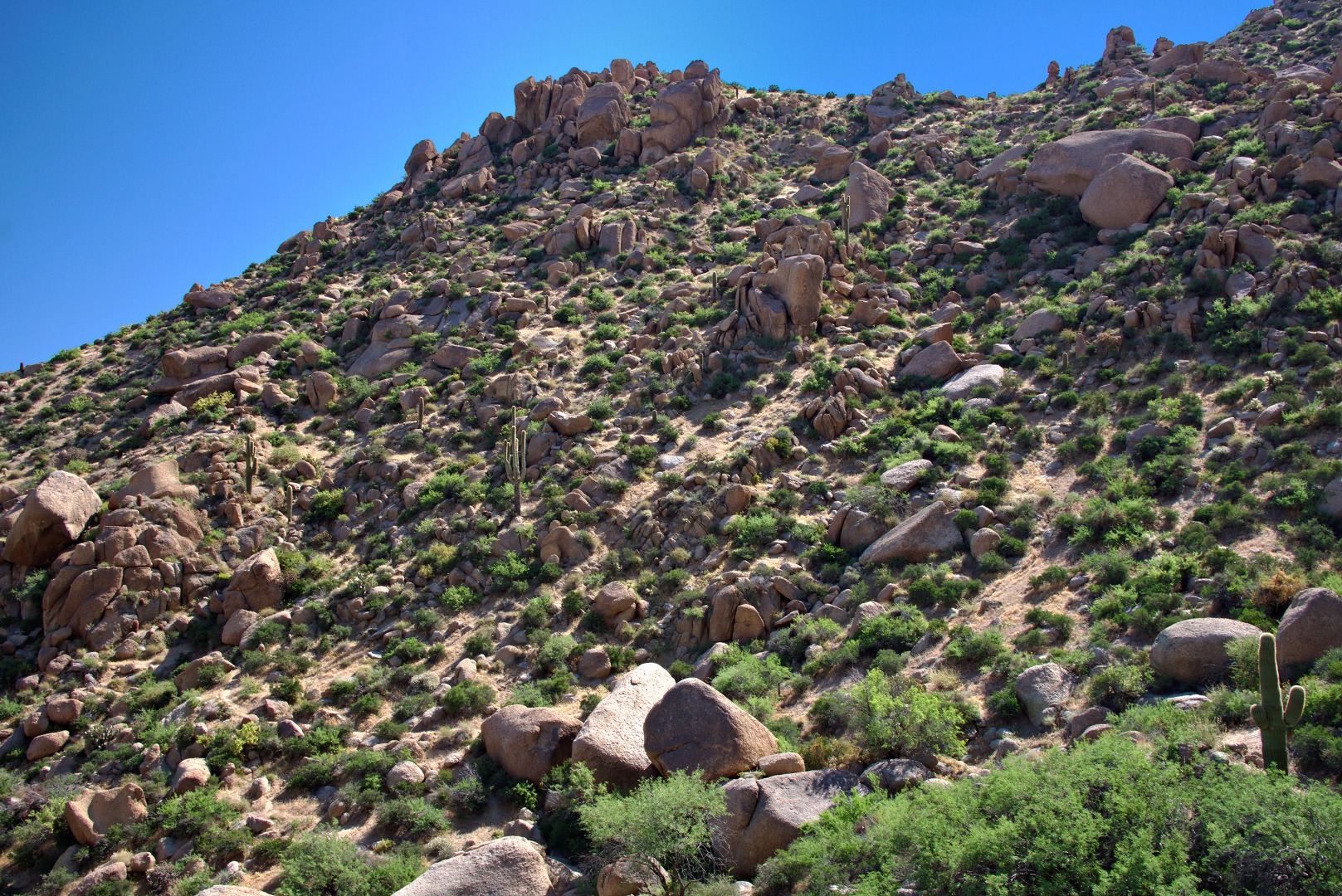 We came to a fork in the trail.  I picked the right fork which lead to this area shown in the photo below.  My recollection is that the left path leads to an even steeper rock to climb up, over, and back down again. 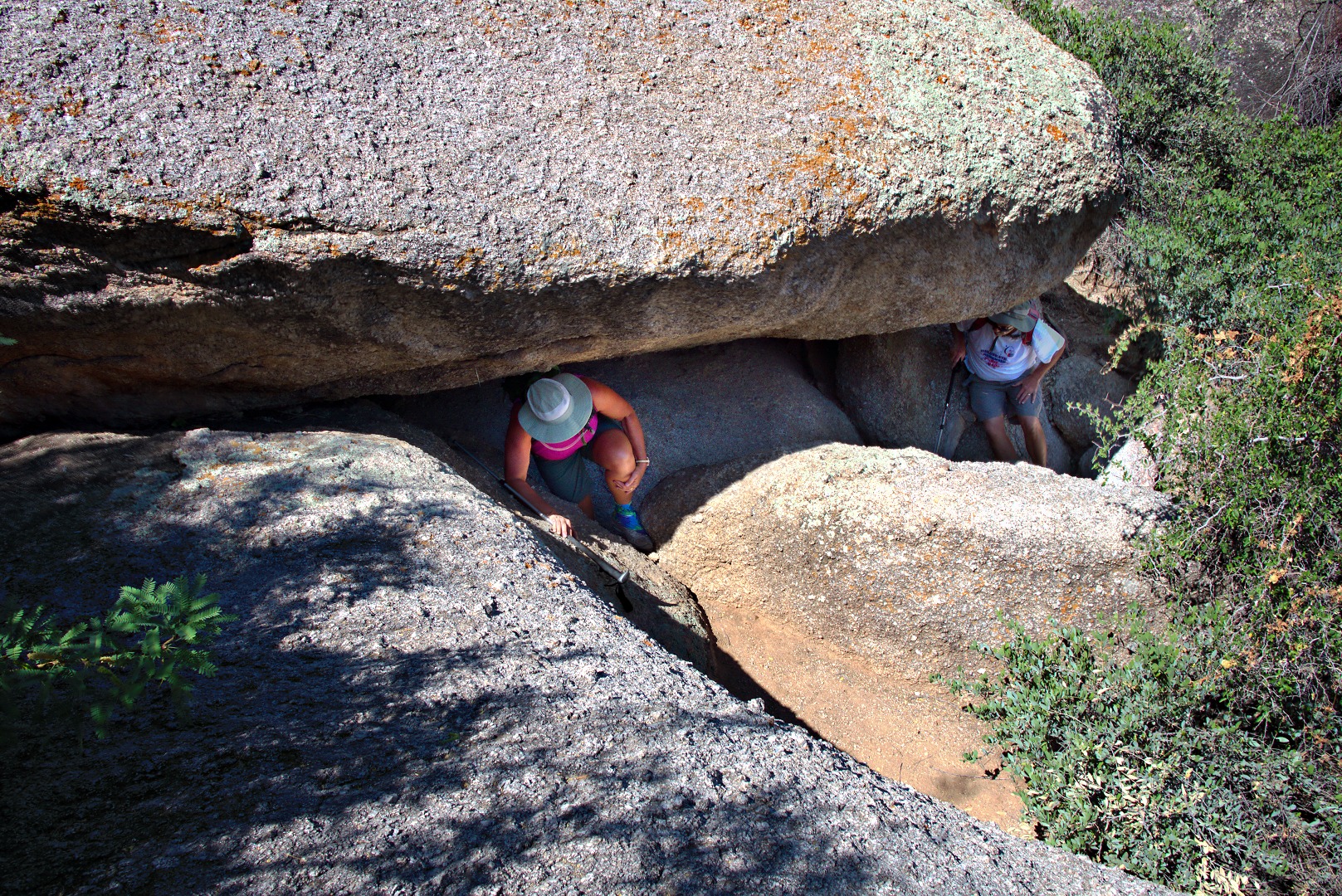 Another view of Troon and Pinnacle Peak: 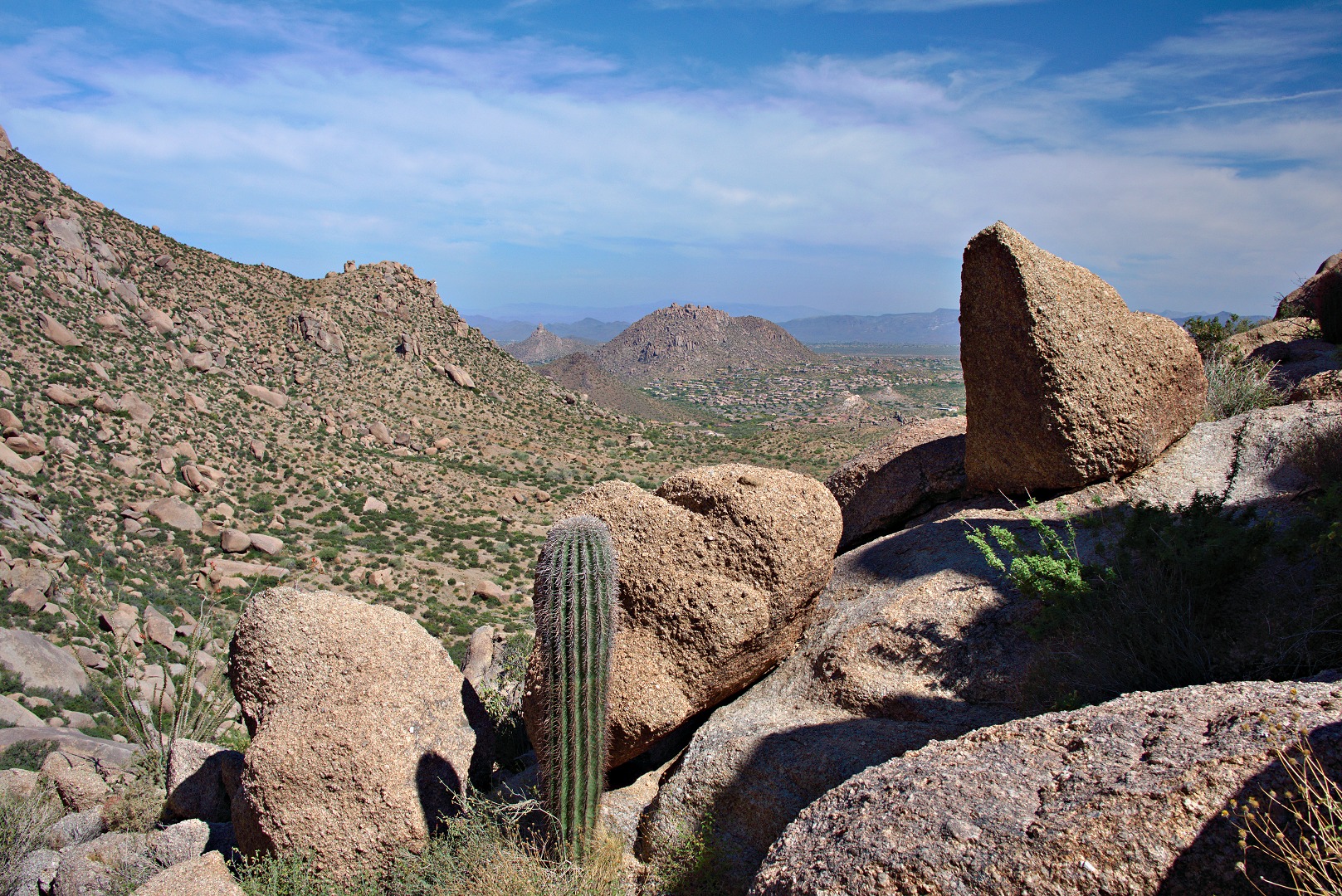 We got back to the Tom’s Thumb Trail, hiked down, and discovered that our total distance was still under four miles.  We bumped it up a bit further by hiking out to take a look at the trail leading up to Morrell’s Wall.  This a rock formation in the Morrell’s Wall Parking Lot Area.  There’s no parking lot next to this area any longer, but it still retains the name. 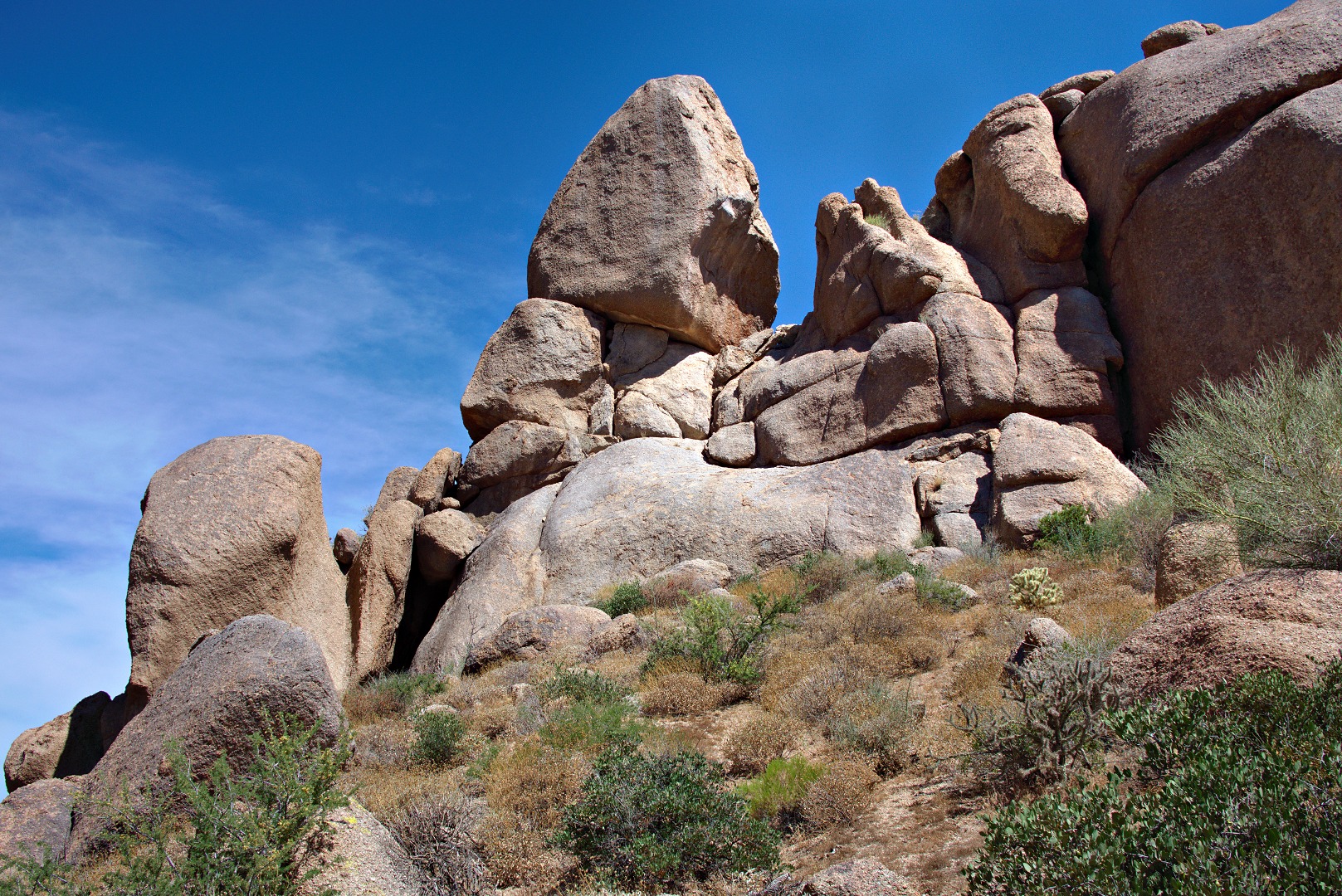 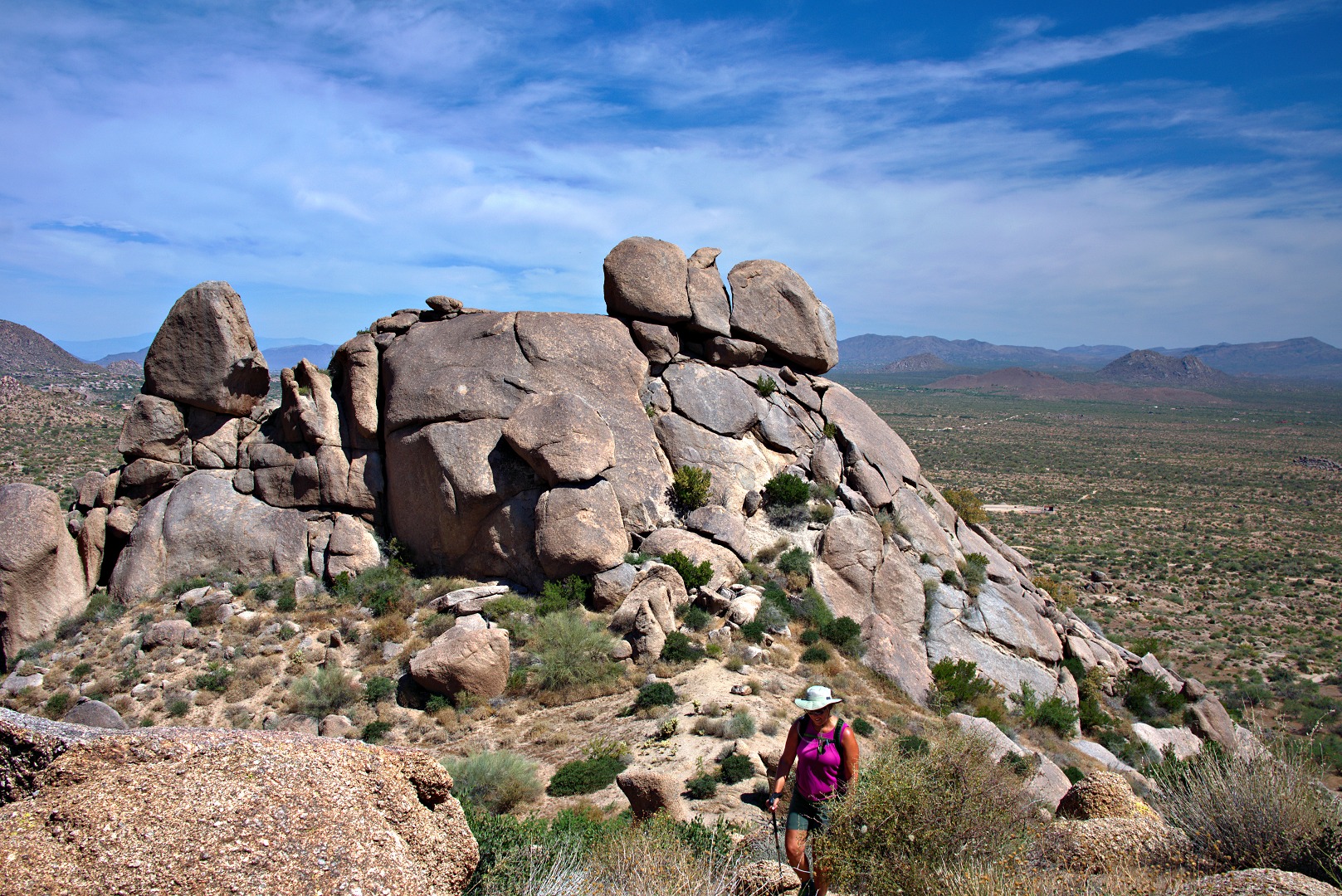 I considered going all the way up to Morrell’s Wall, but we decided to save that for another day.  We ended up hiking only 4.67 miles with 1500 feet of total ascent.

Another View from the “Cave” below Gardener’s Wall

Ocotillo on the Sonoran Trail