Four of us, Marilyn, Linda, Bob, and I skipped the scheduled Fitness Hike at McDowell Mountain Park this week.  Instead, we met at Linda’s house and hiked up to the top of Little Granite Mountain!

The goal was get to the peak of this mountain:

A view from early in the hike when we were on good trails: 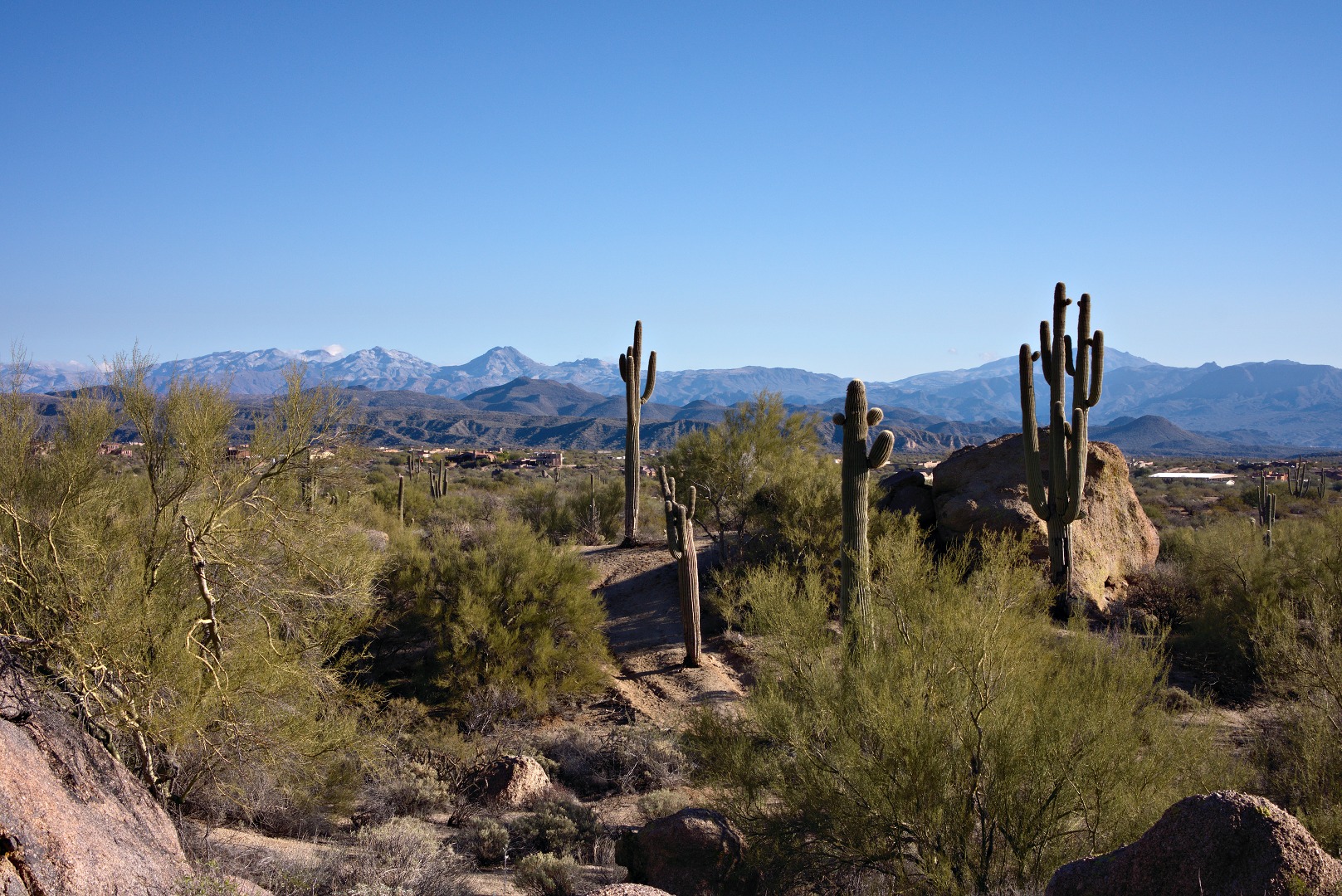 There are a lot of trails in this area, nearly all of which were made by motorcycles and quads.  This area is now part of the Preserve; Linda tells me that there is almost no motorcycle traffic there now.  We did, however, see some recent tracks on one of the trails that we hiked.

It’s difficult to know which trails to hike; we basically just guessed until we got to a point where I thought we might be able to begin our ascent.  We bushwhacked for only a short ways before finding an established trail.  We found numerous trails on our way up.  Unfortunately, there’s a lot of growth and rocks.  We’d often lose the trail for a time only to find it, or some other trail, again later on.

Here is a photo Linda making her way up one of these marginal trails: 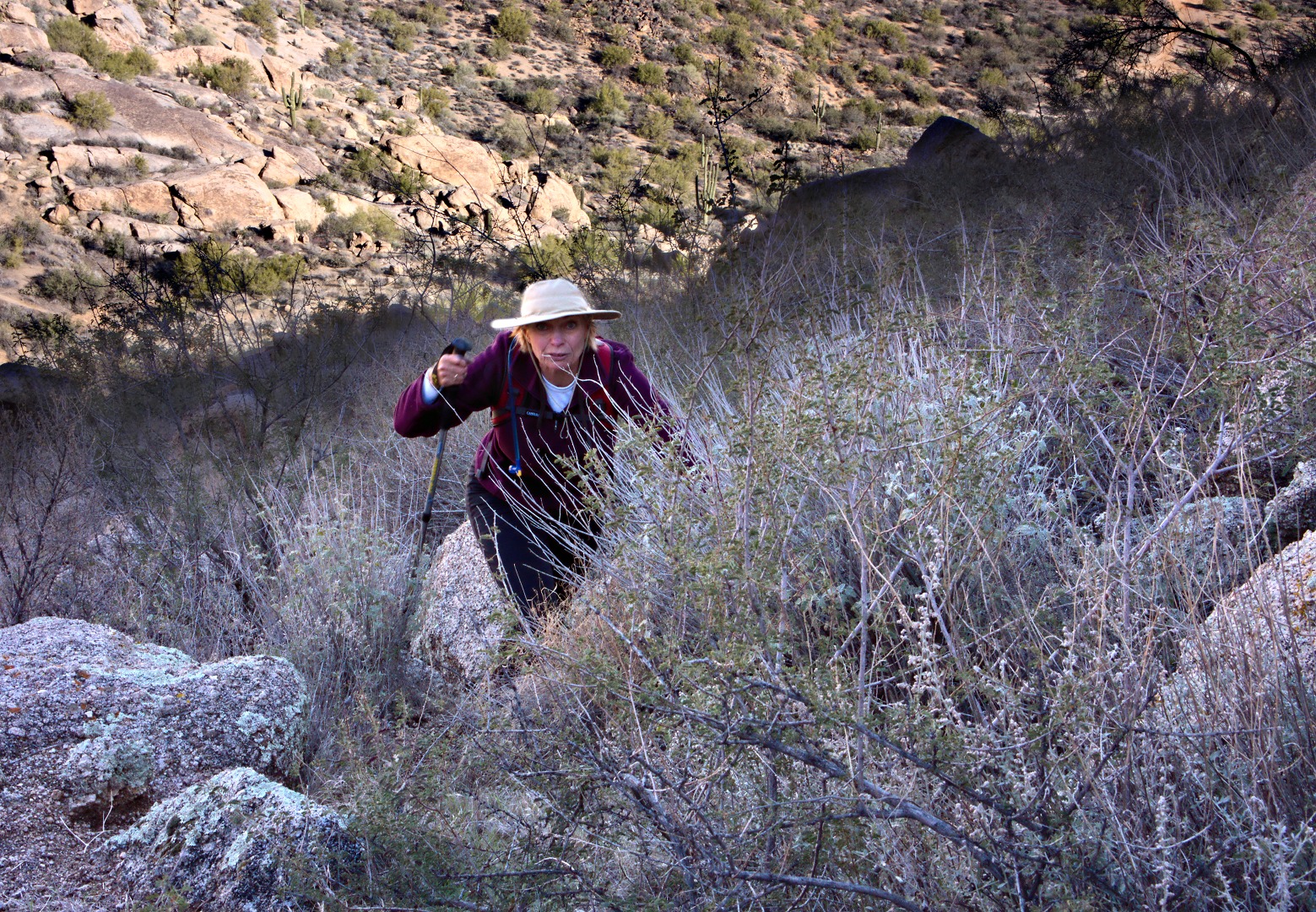 The route we ascended was in the shade and was quite cold even though we were expending a lot of energy.  Bob forged ahead and waited for the rest of us in the sun.  That’s still not the top though, just one of the lower peaks. 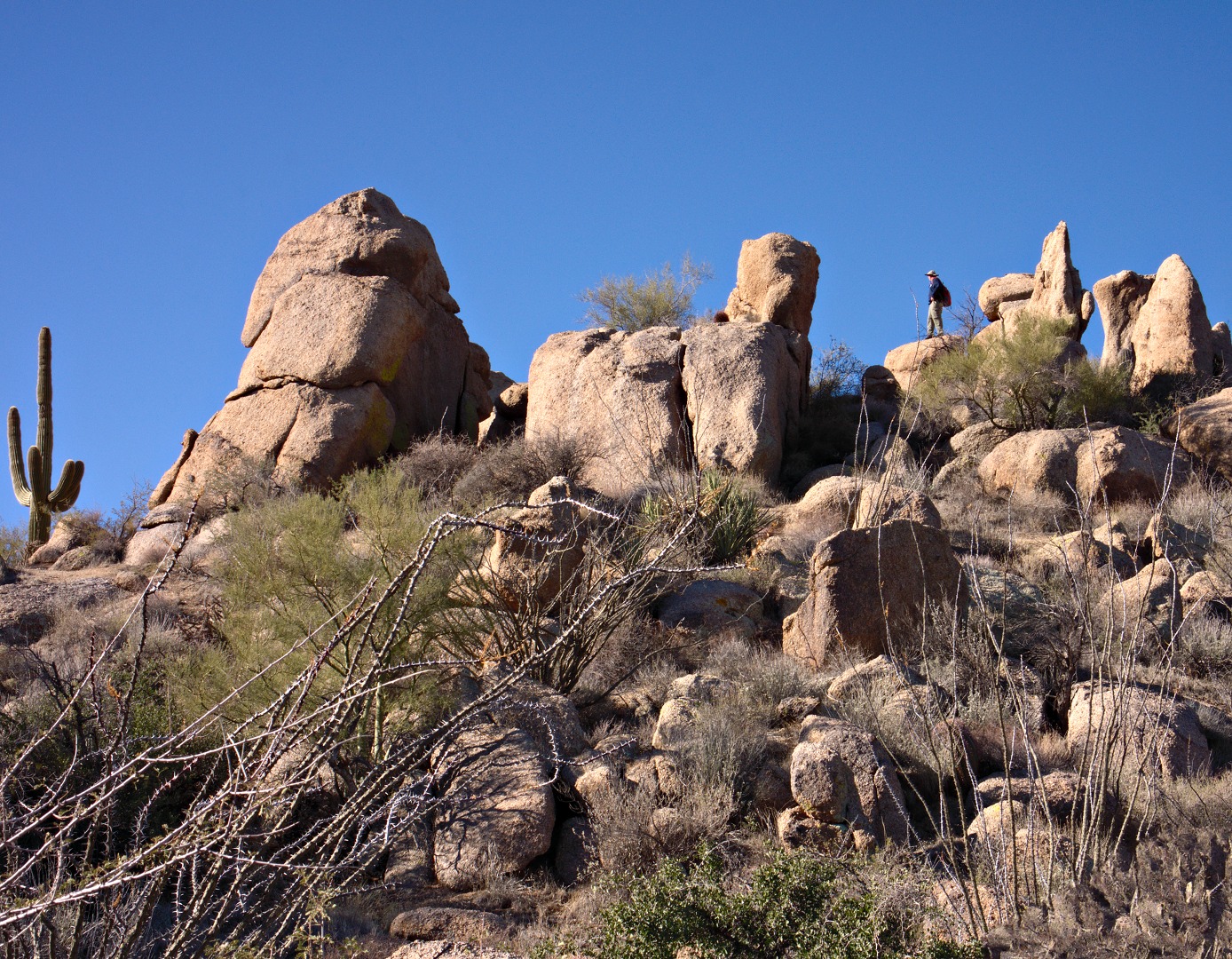 A view of Troon to the left and Pinnacle Peak to the right.  We were surprised at the high density of saguaros in the area. 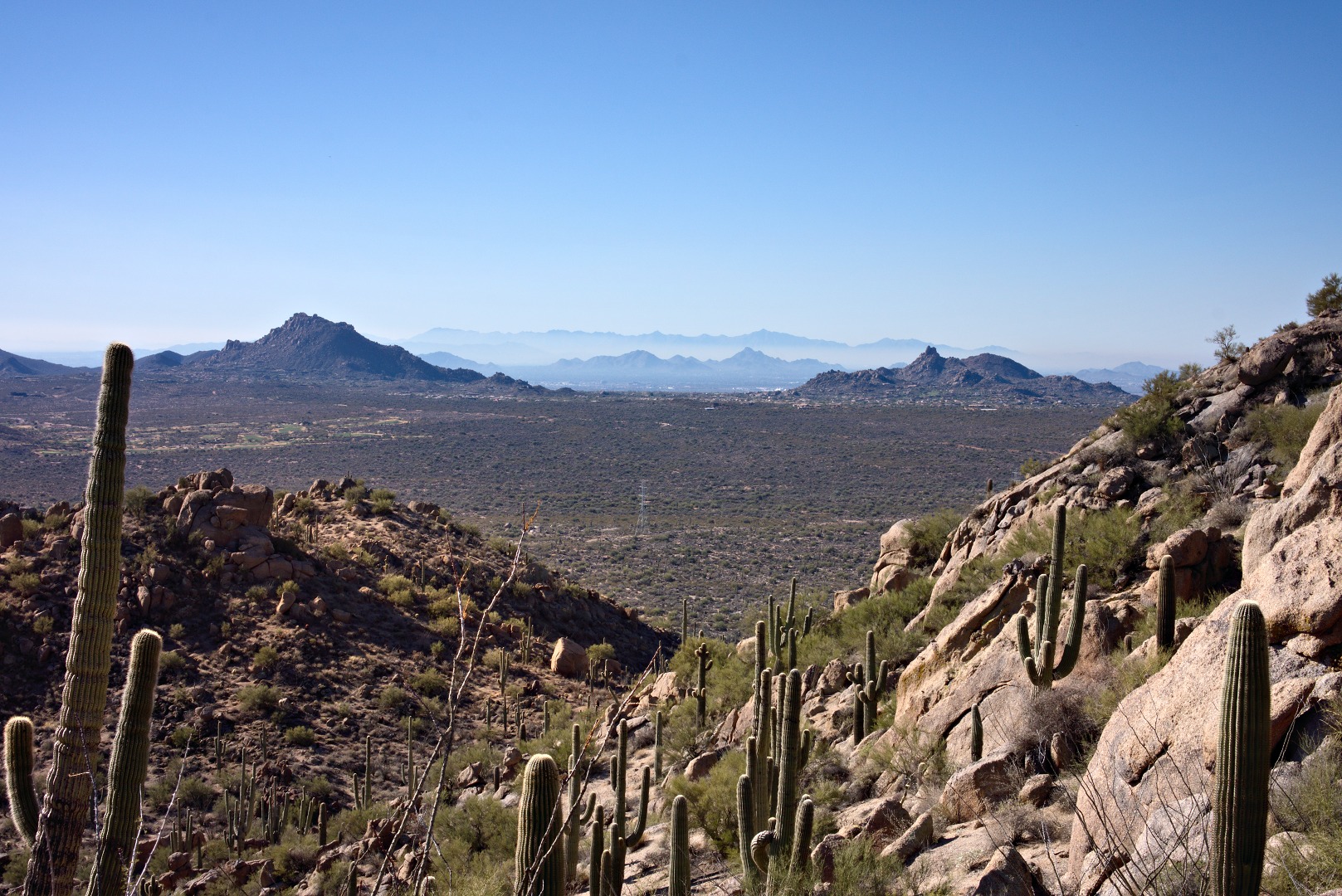 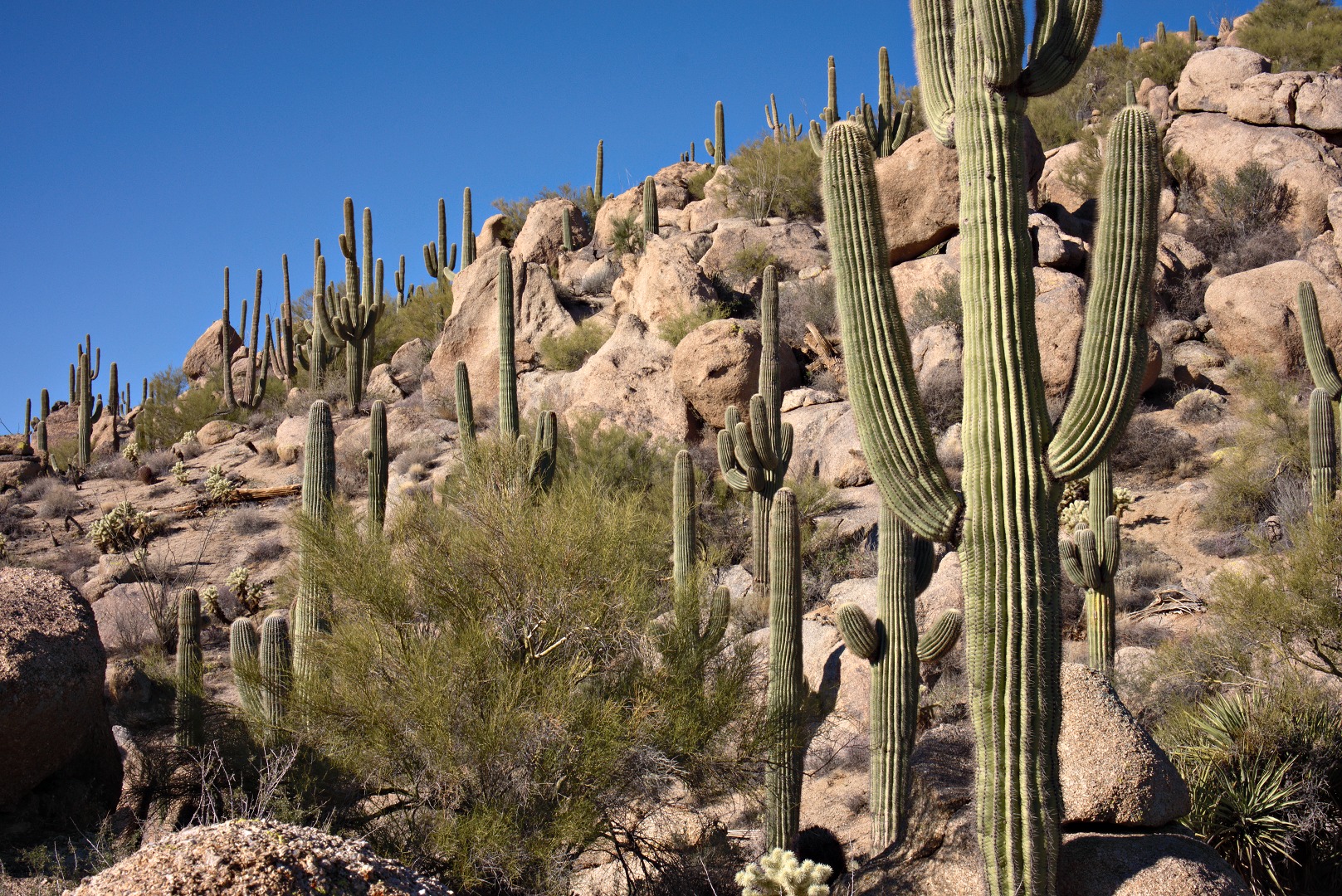 Another view of Pinnacle Peak from even higher up.  This photo helps to convey just how steep this area is. 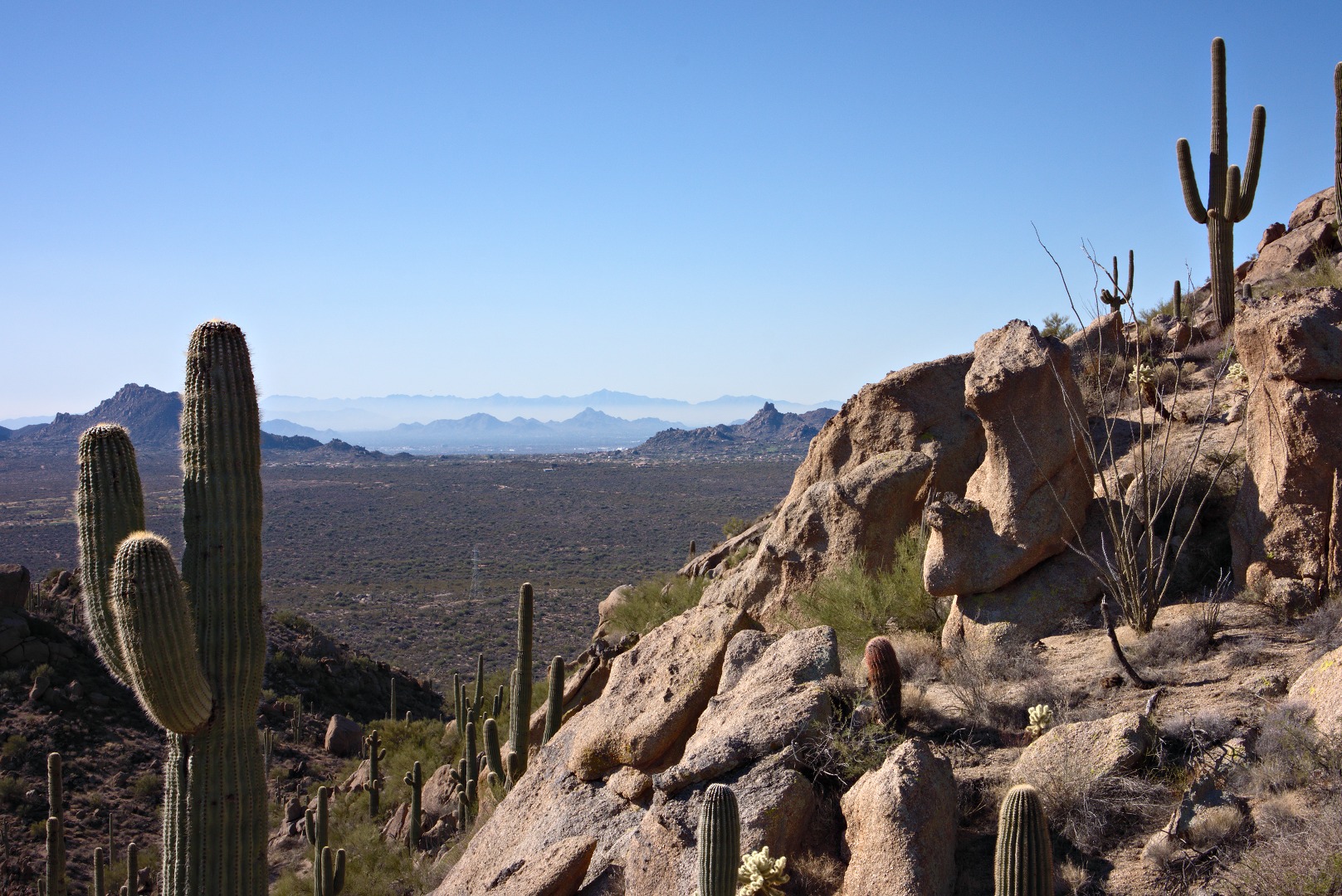 Linda took this photo of me on top of the peak: 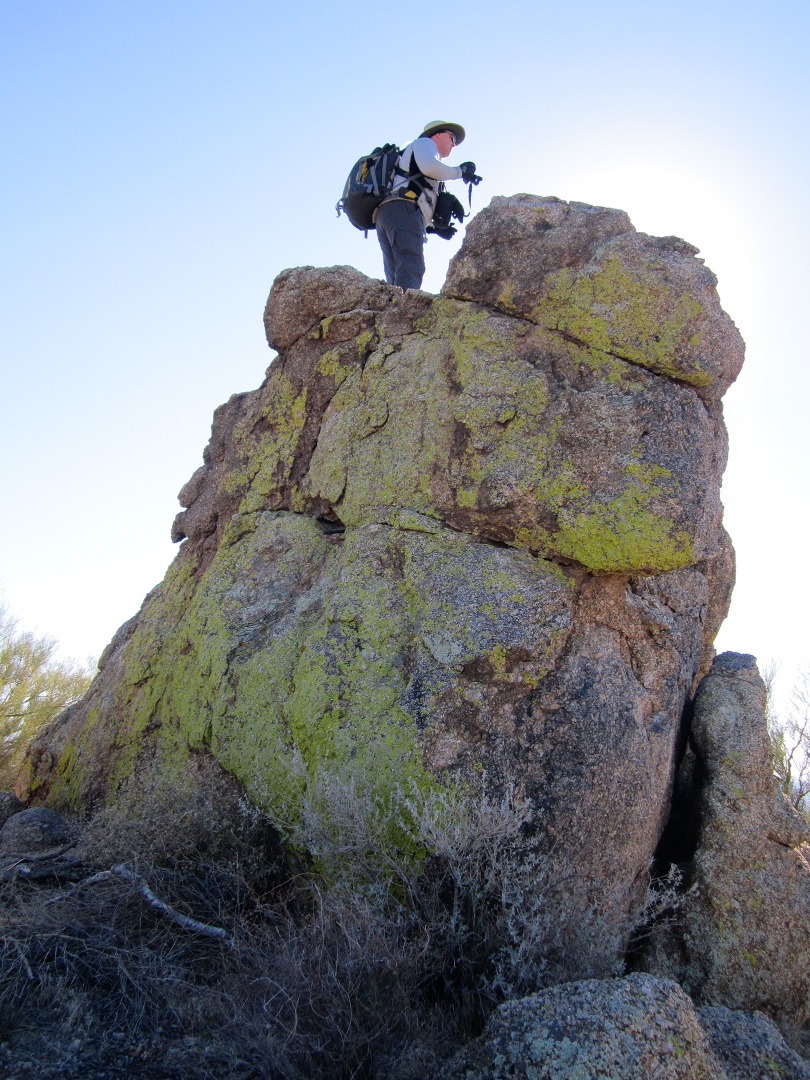 Linda also took these photos of me and Marilyn: 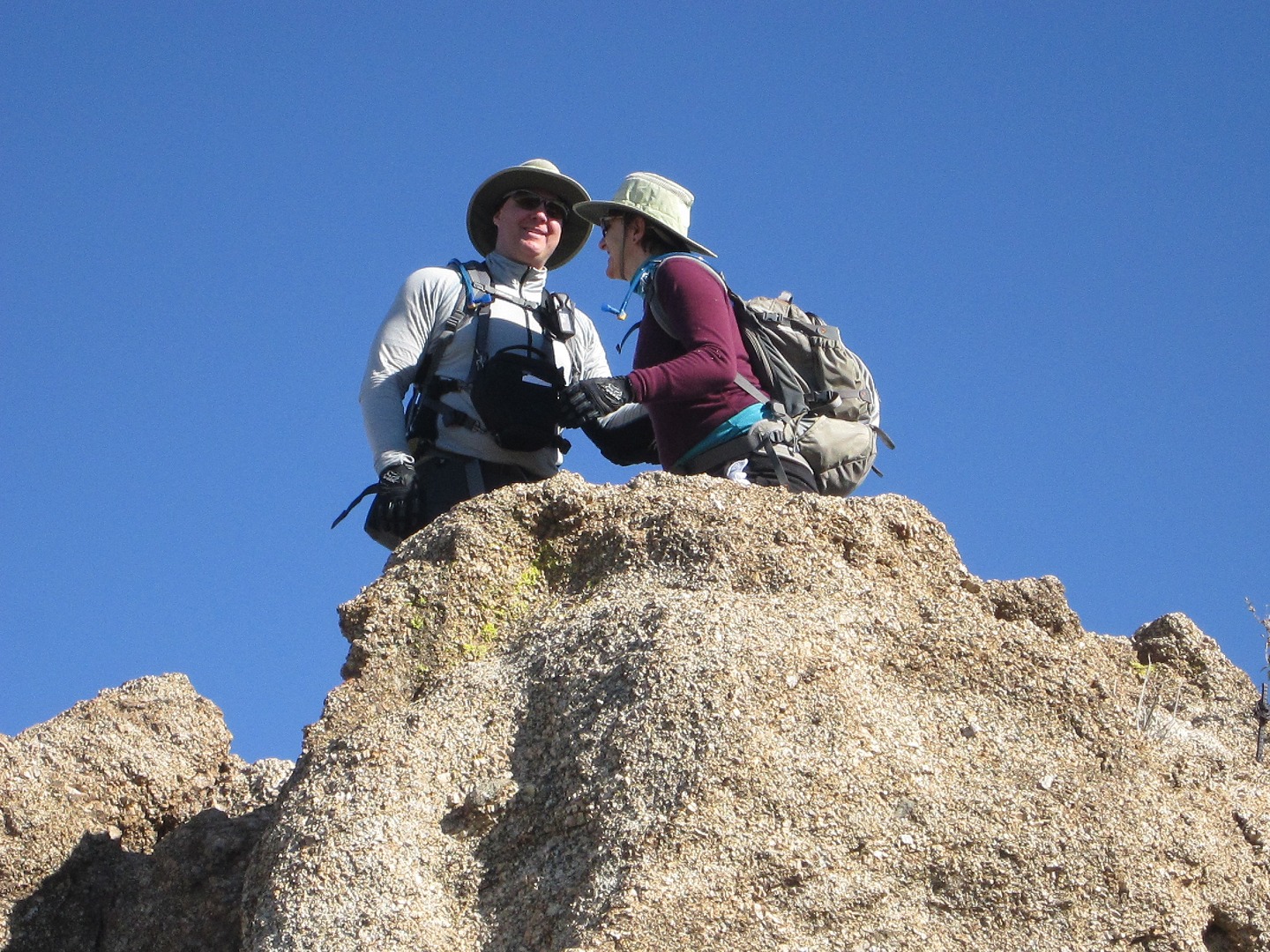 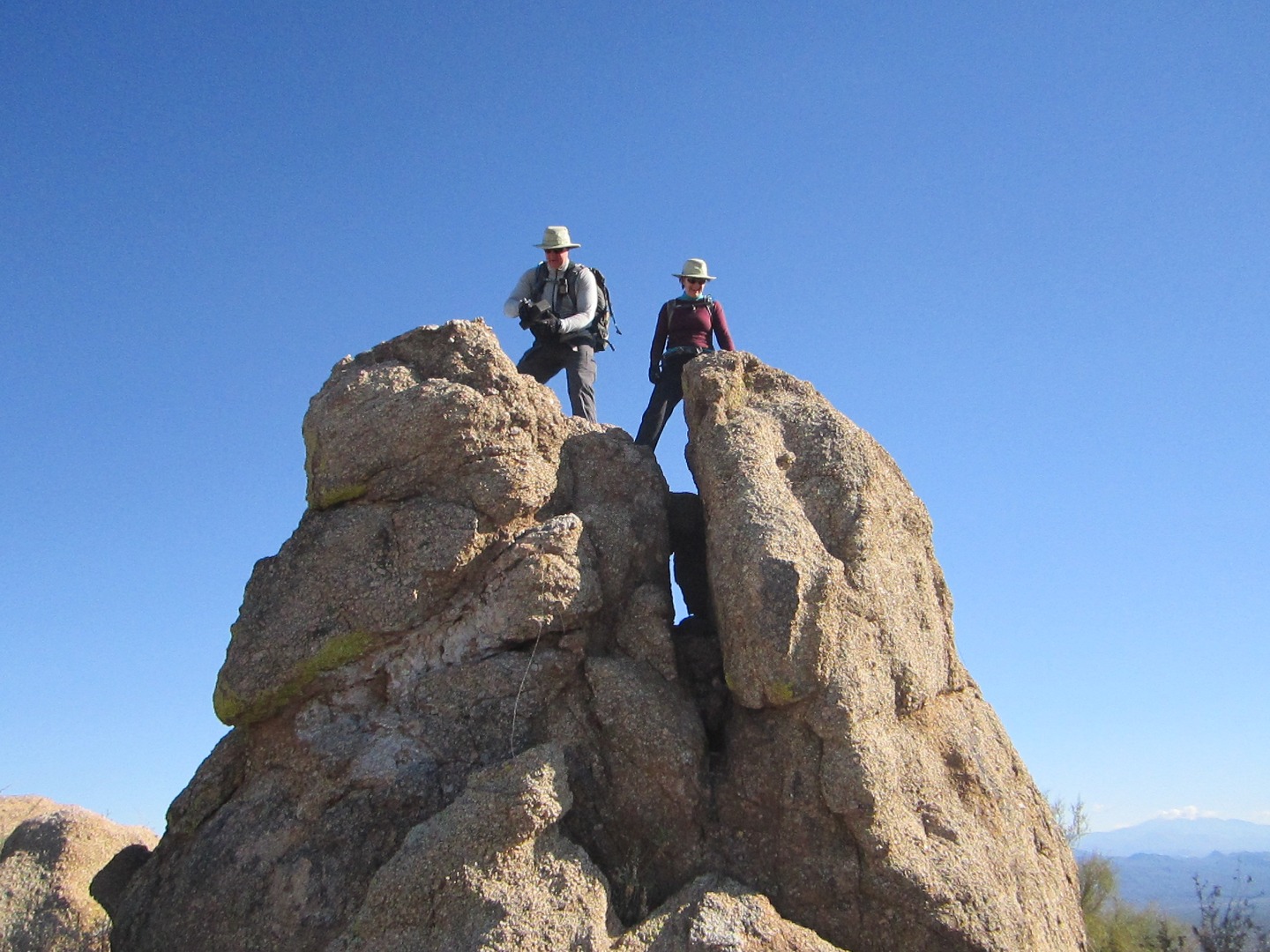 We were definitely not the first ones up there.  The US Coast and Geodetic Survey placed this marker on the top in 1946. 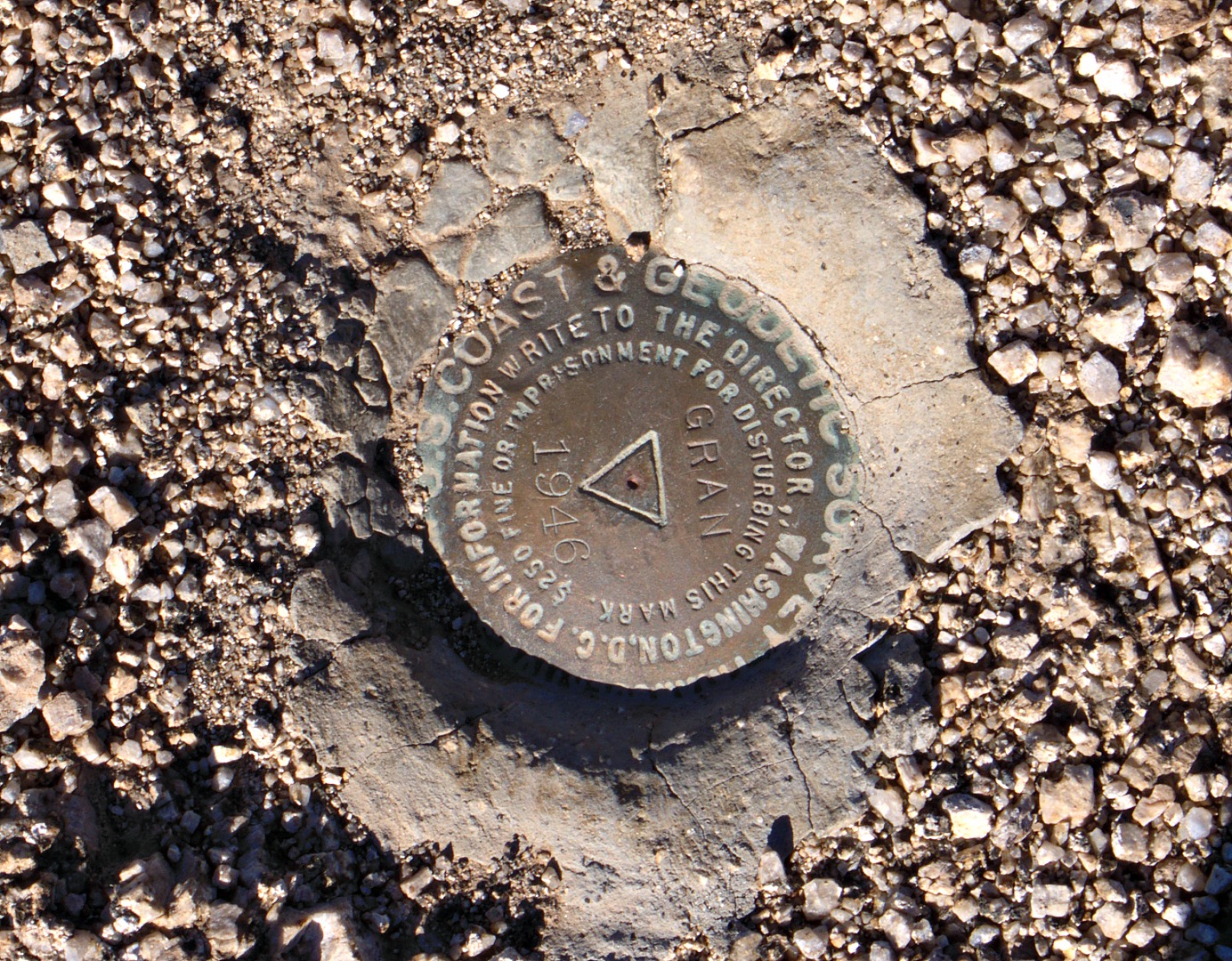 A view from the top.  Bartlett Dam is just visible at the far right of the photo. 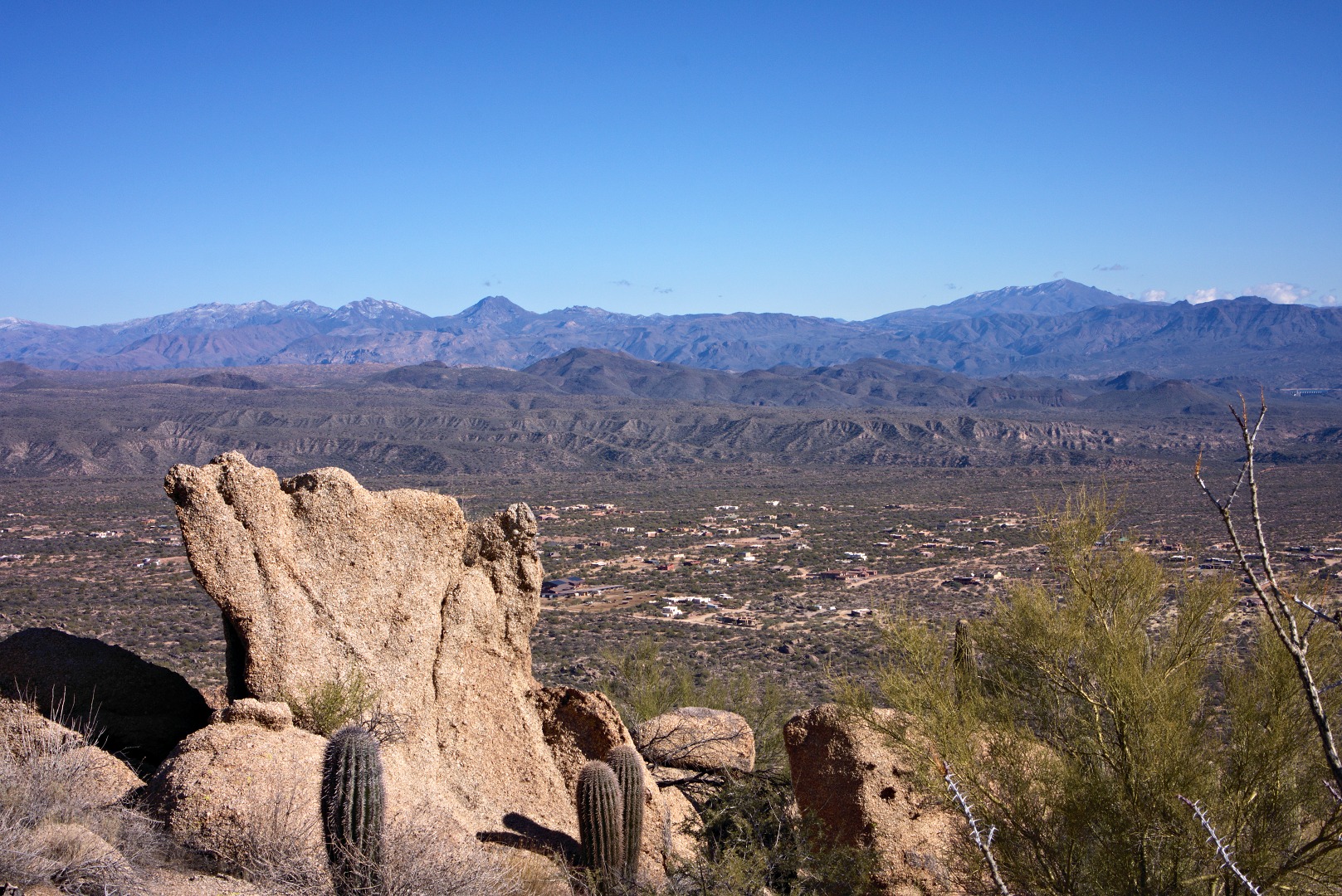 Four Peaks with a small bank of clouds for a cap: 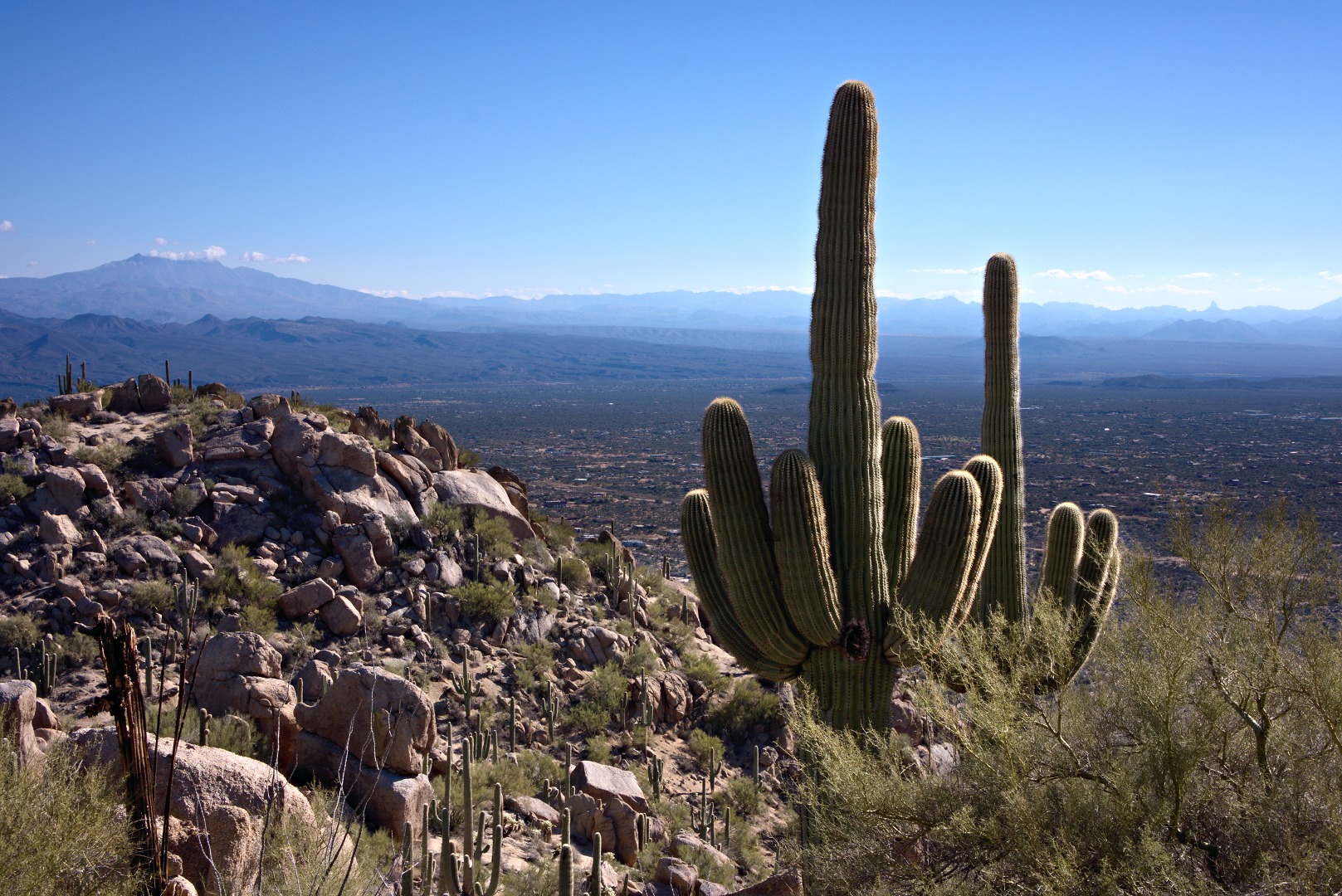 Another view from somewhere near the top.  We wandered around for a long while trying to decide on the best way down.  I had seen some cairns that looked promising, but somehow we missed them during the initial part of our descent.  I backtracked and found them only to find that they lead back to where the rest of the group was patiently waiting. 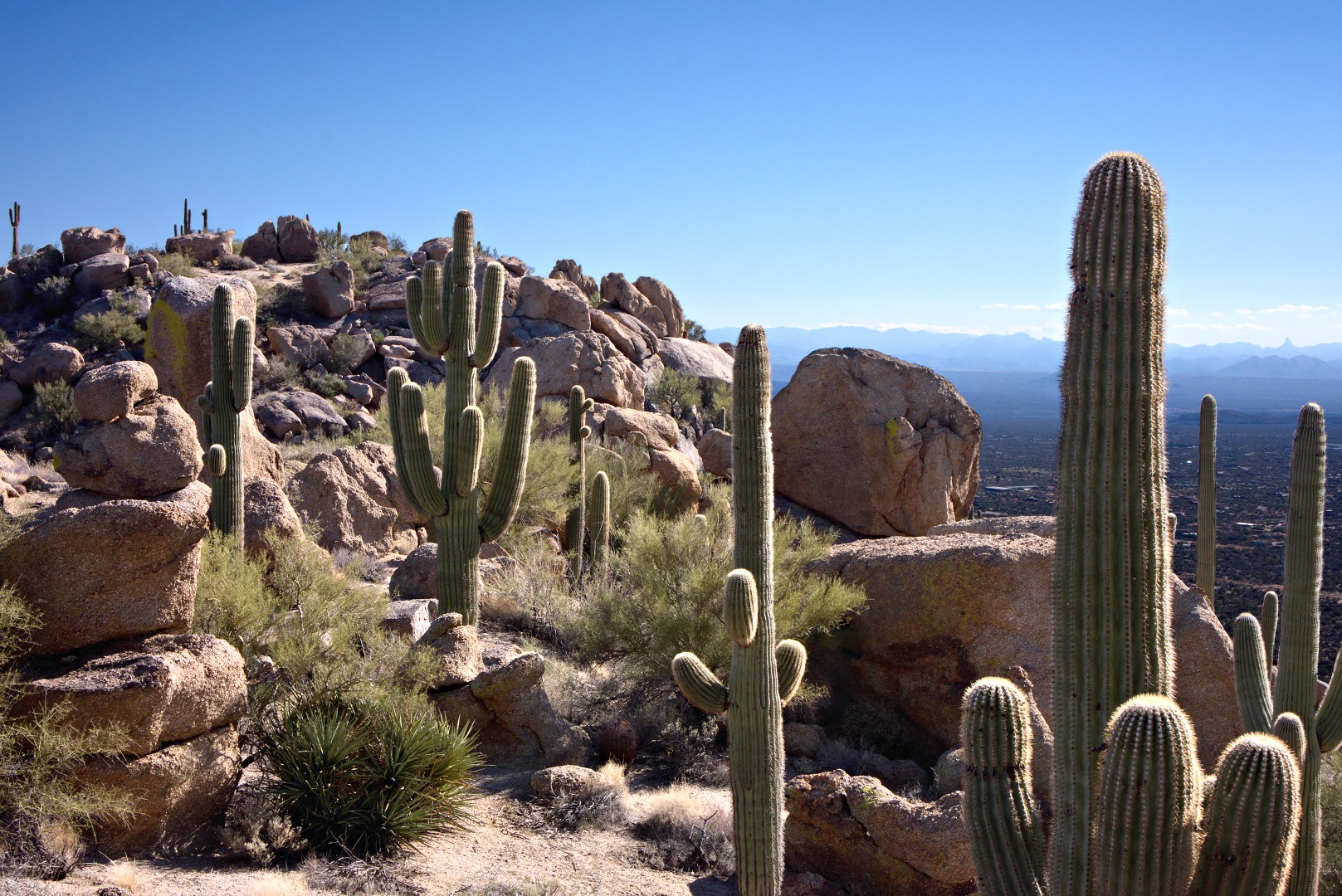 We ended up taking a different route on our descent.  We somehow made our way down through that mass of rock and vegetation in the photo below. 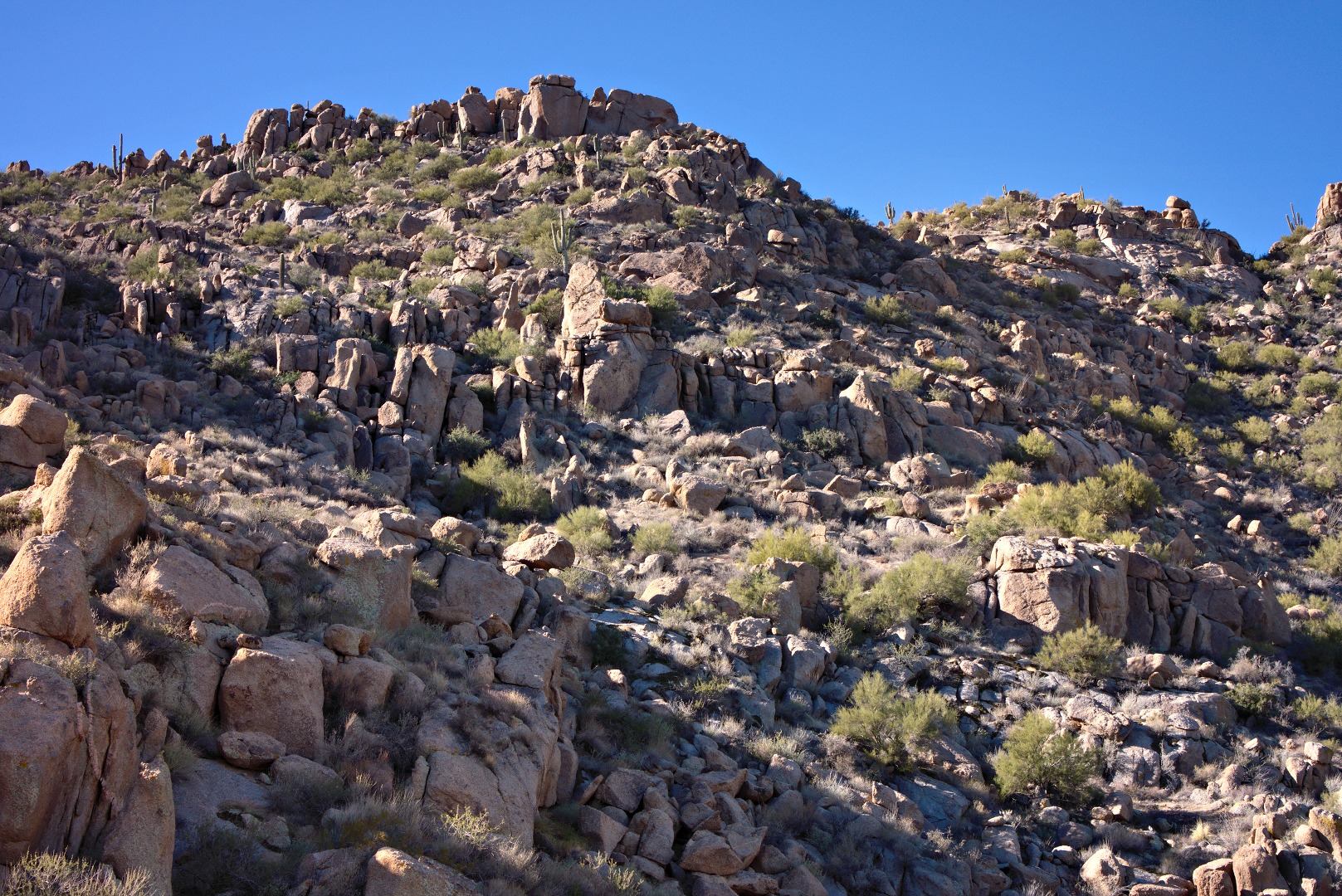 Linda, Bob, and Marilyn hiking back on easier trails: 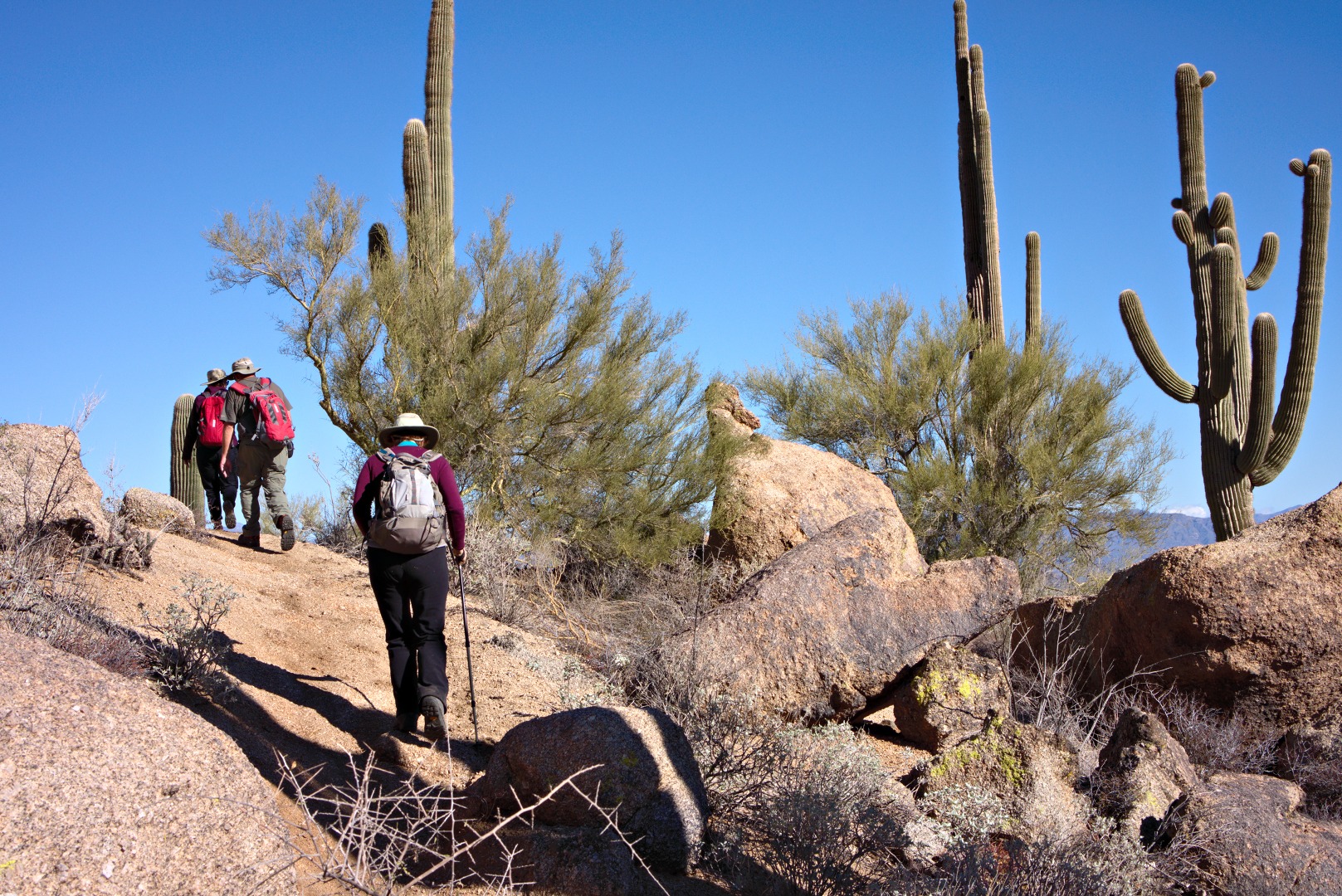 Looking up at a large saguaro.  I thought about editing the airplane out of the picture, but decided to leave it in. 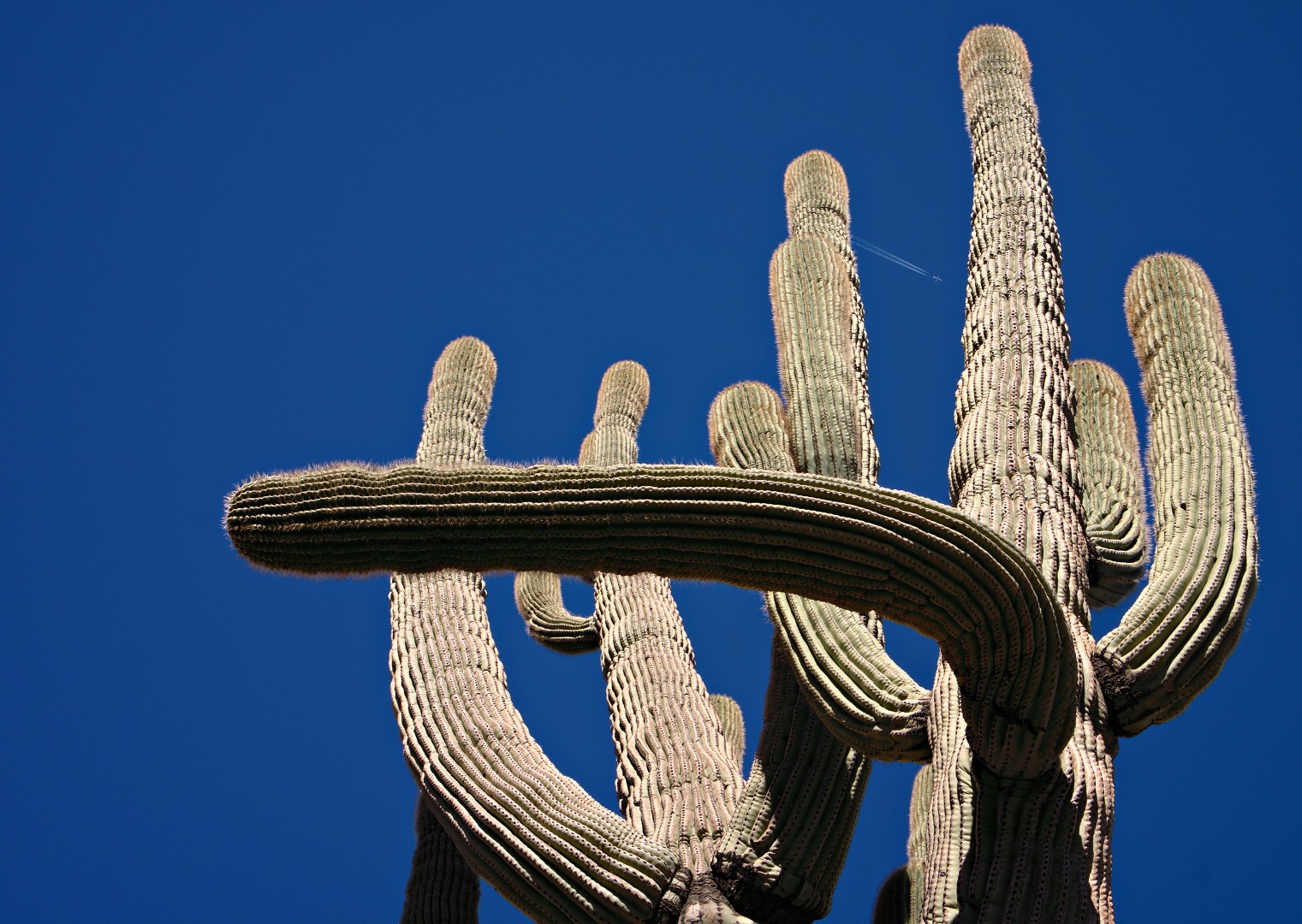 Linda took this photograph of the same saguaro.  I’m in the process of framing the shot above.  The NEX-7’s viewscreen does tilt, but not quite enough for me to see what’s at the top of the frame.  It took several tries before I was satisfied with the composition. 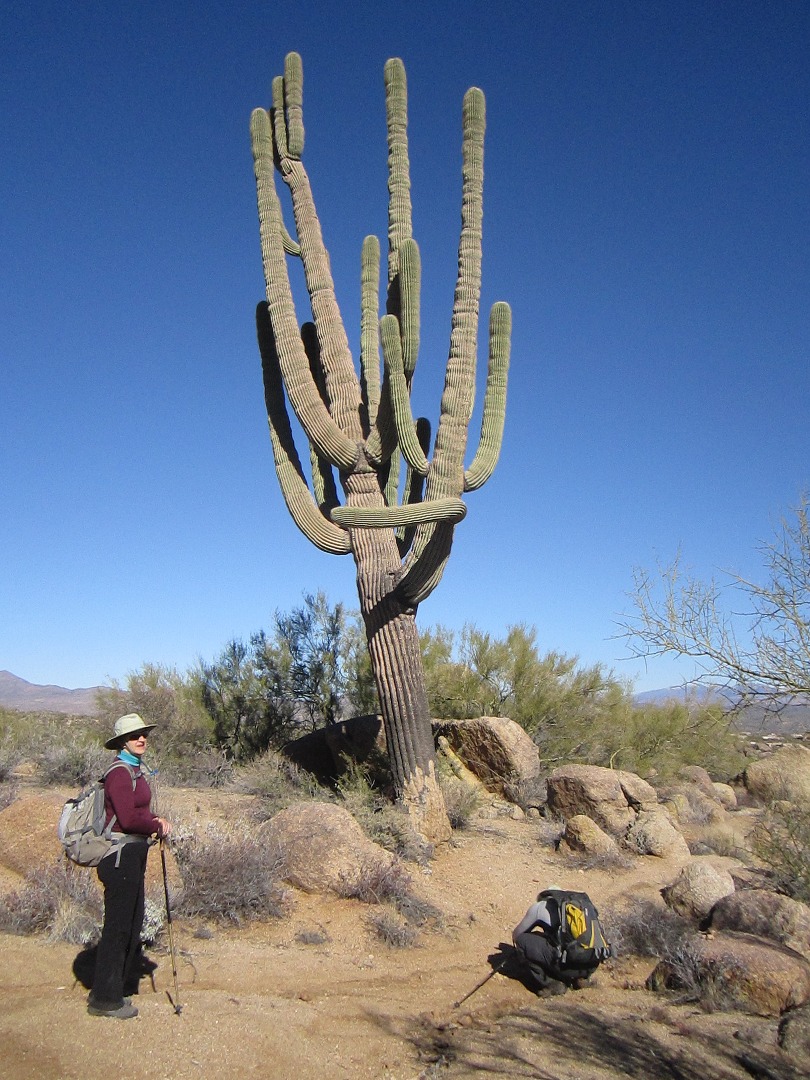