Bob, Janet, Linda, Nancy, and I met at 7:30am, half an hour early, in order to give ourselves enough time to do a long hike with a significant amount of elevation change.  A 7:00am start might have been even better.

We hiked out Dixie Mine to the mine, passed the petroglyphs, and continued up the wash until we hit the Prospector Trail.  We took Prospector up to the Bell Pass Trail and then hiked up to Bell Pass.  After looking at the views afforded by our vantage point at Bell Pass, we turned around and hiked the Bell Pass Trail to the Windmill Trail.  We stopped at the windmill and spent some time looking around that area.  We continued on Windmill until it ended at Coachwhip. Coachwhip took us back to the Dixie Mine Trail, which, in turn, took us back to our vehicles.  We hiked twelve miles with over 1700 feet of total ascent.

Bob pointed out this bright field of quartz on the Dixie Mine Trail: 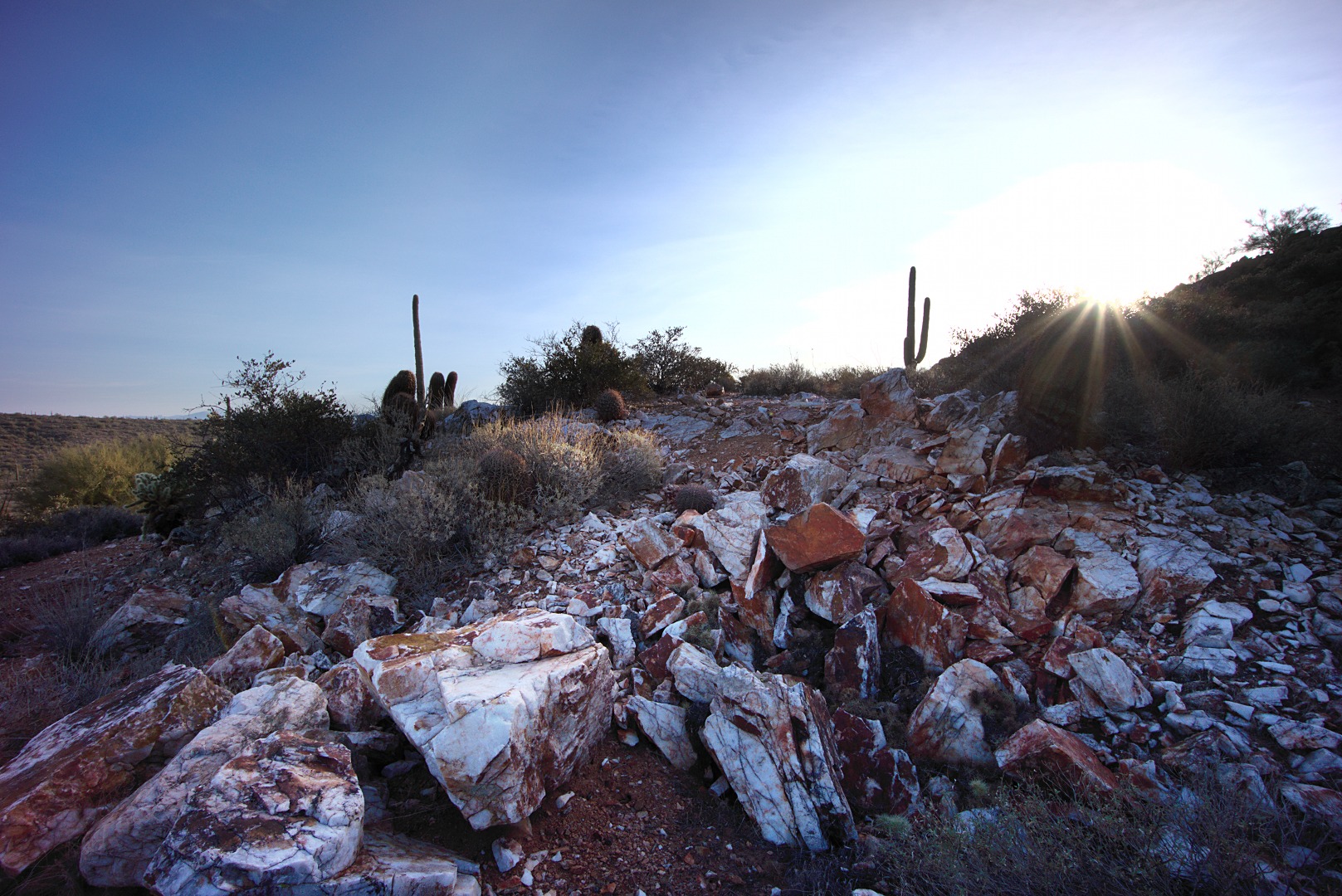 Linda takes photos of the petroglyphs near the mine, while Janet looks on: 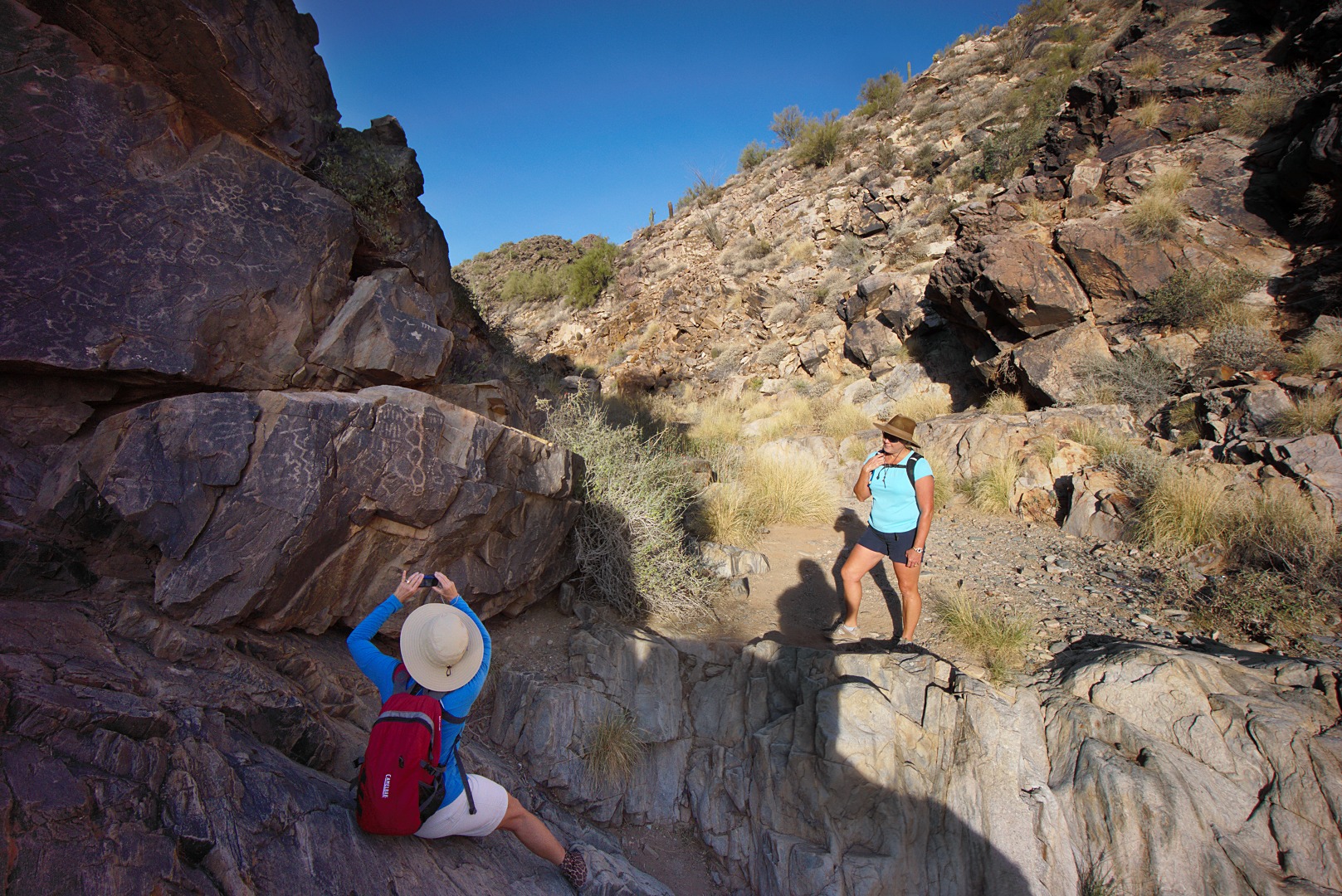 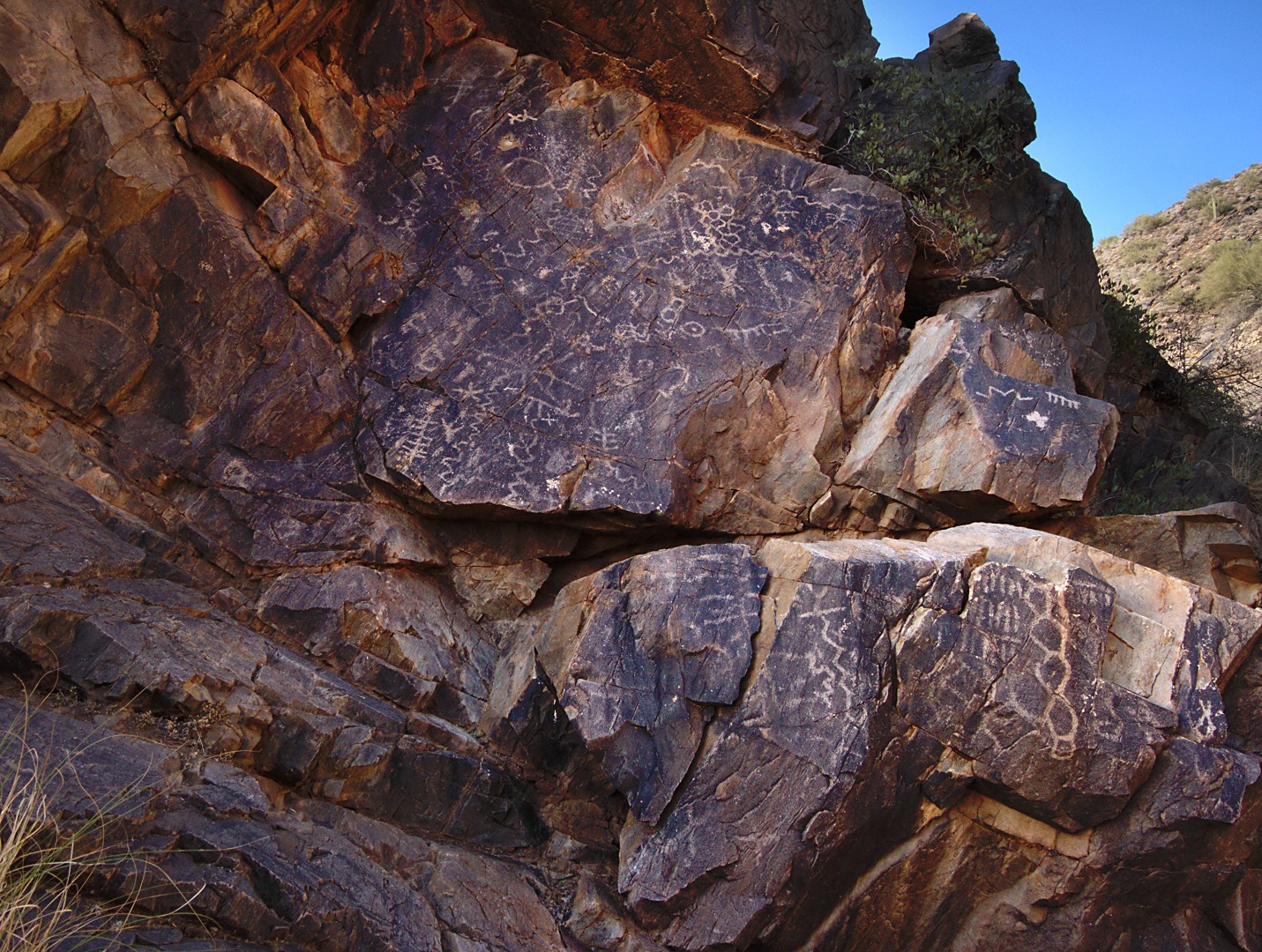 Linda hikes up the smooth and slippery rock of the (dry) waterfall while Nancy and Bob negotiate the bottom section.  It’s not really as far down as it looks in this photo; it’s an illusion created by the wide angle lens I was using.  If you look to the far left, you can see another petroglyph. 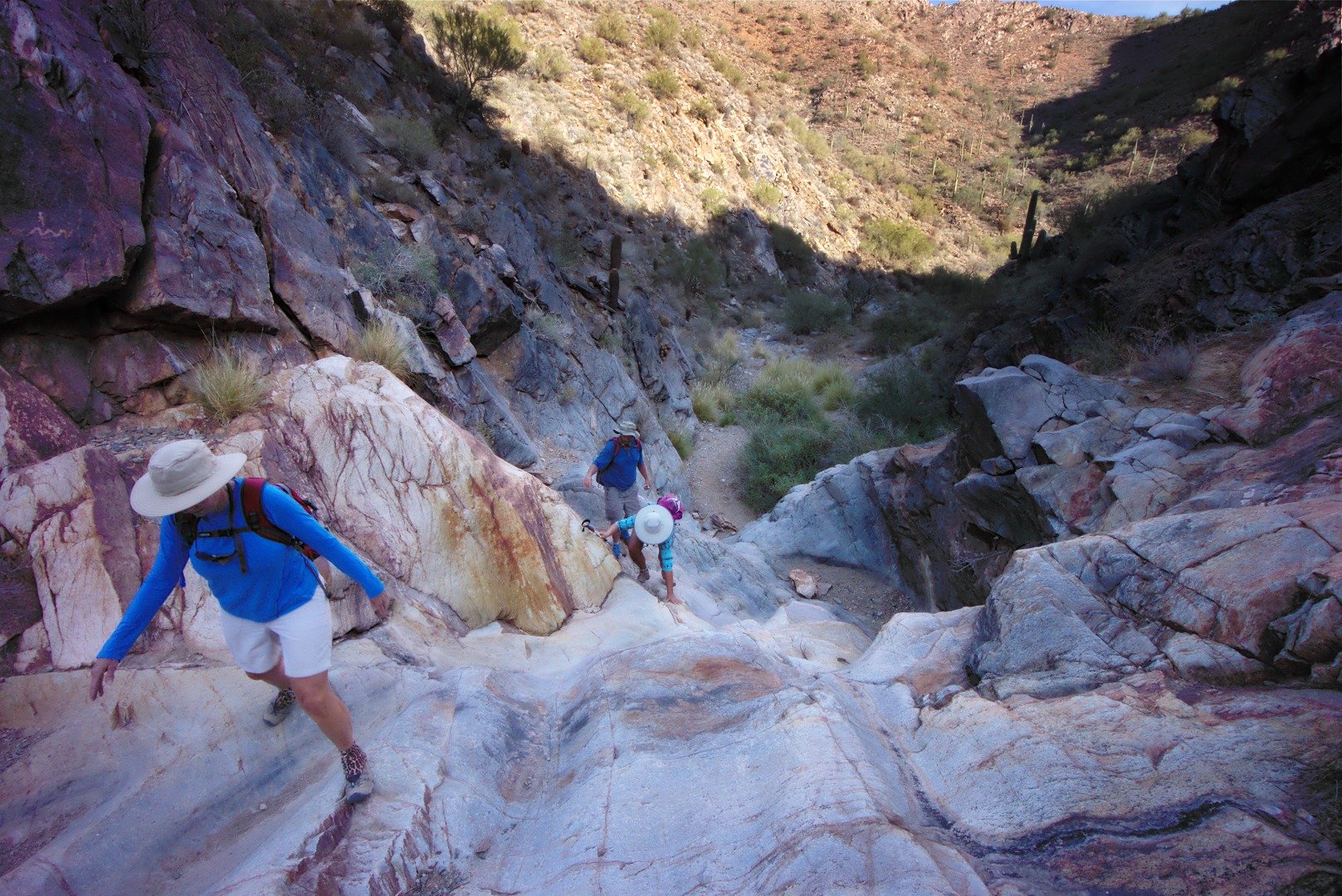 This is what it looked like from the bottom: 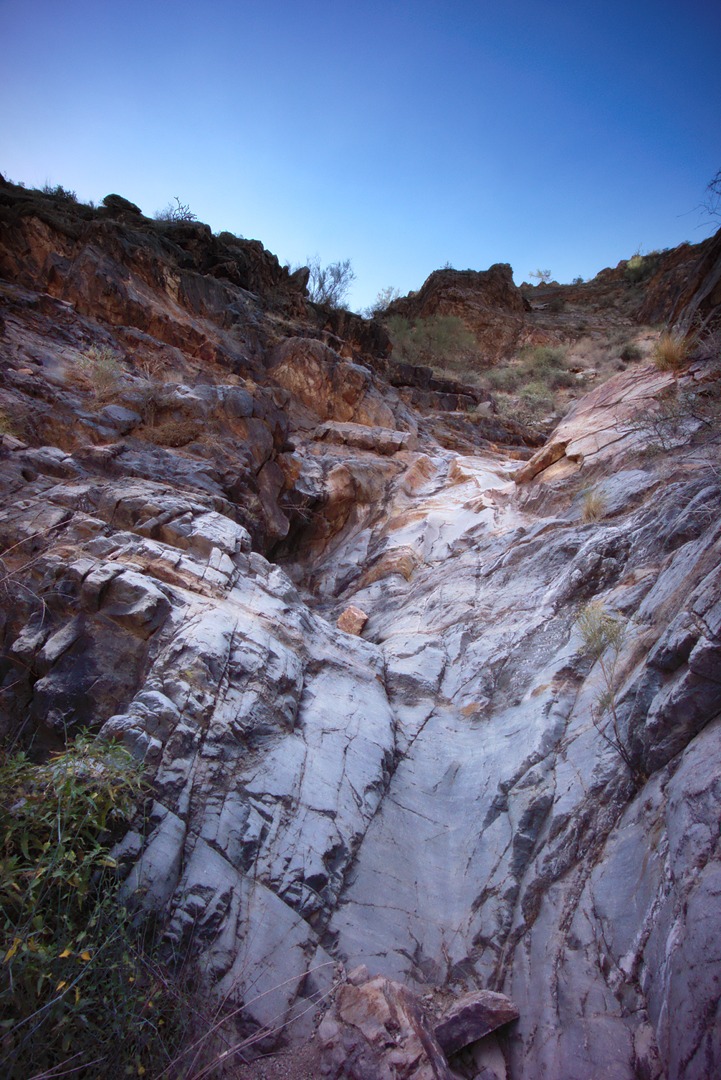 Linda, Janet, Bob, and Nancy slightly past the waterfall area. 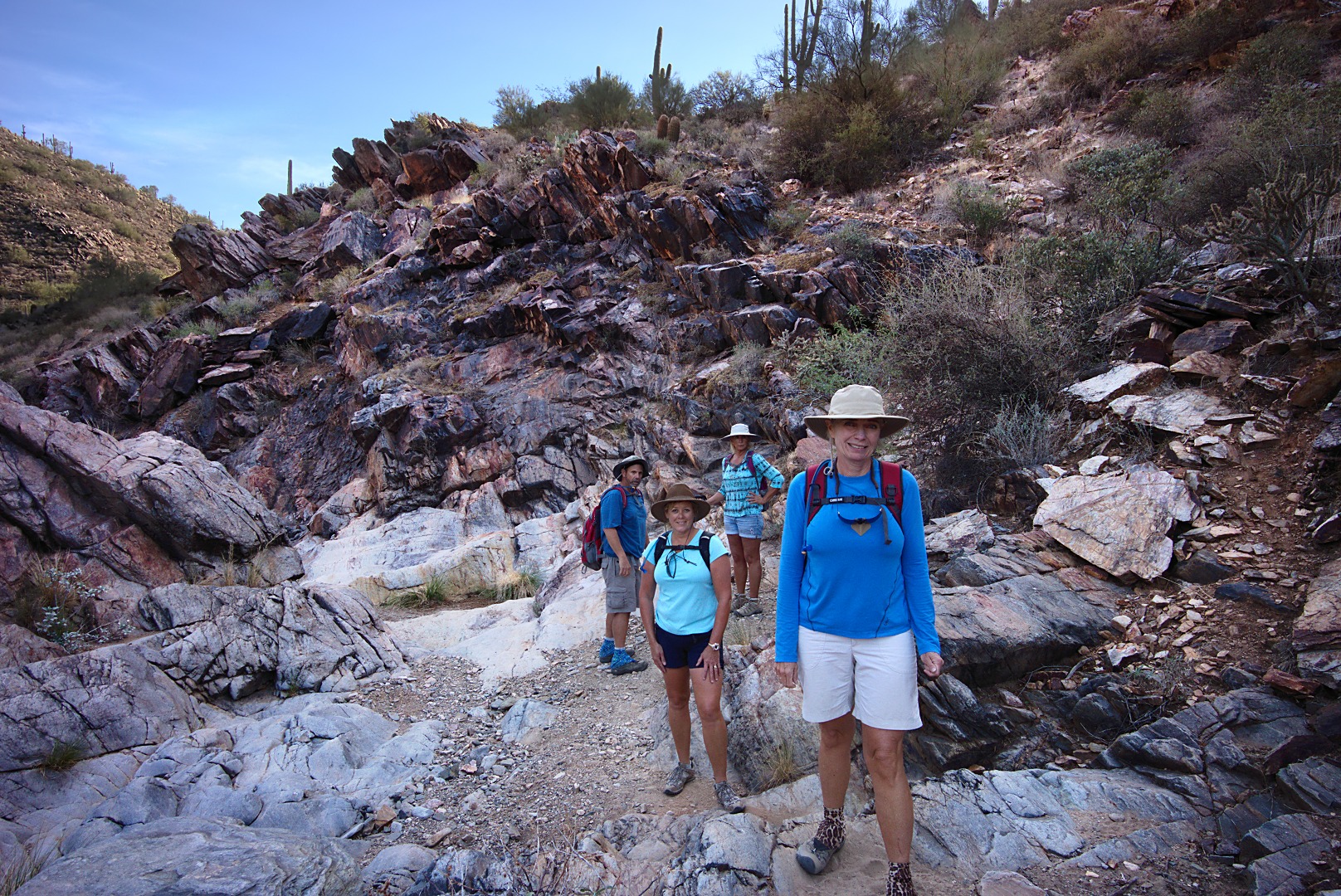 Saguaros on the Prospector Trail.   The saguaros are “leaning” due to the fact that I was pointing the wide angle lens slightly upward.  I had thought about trying to correct the lean in post processing, but Marie convinced me that the photo looked cooler left alone. 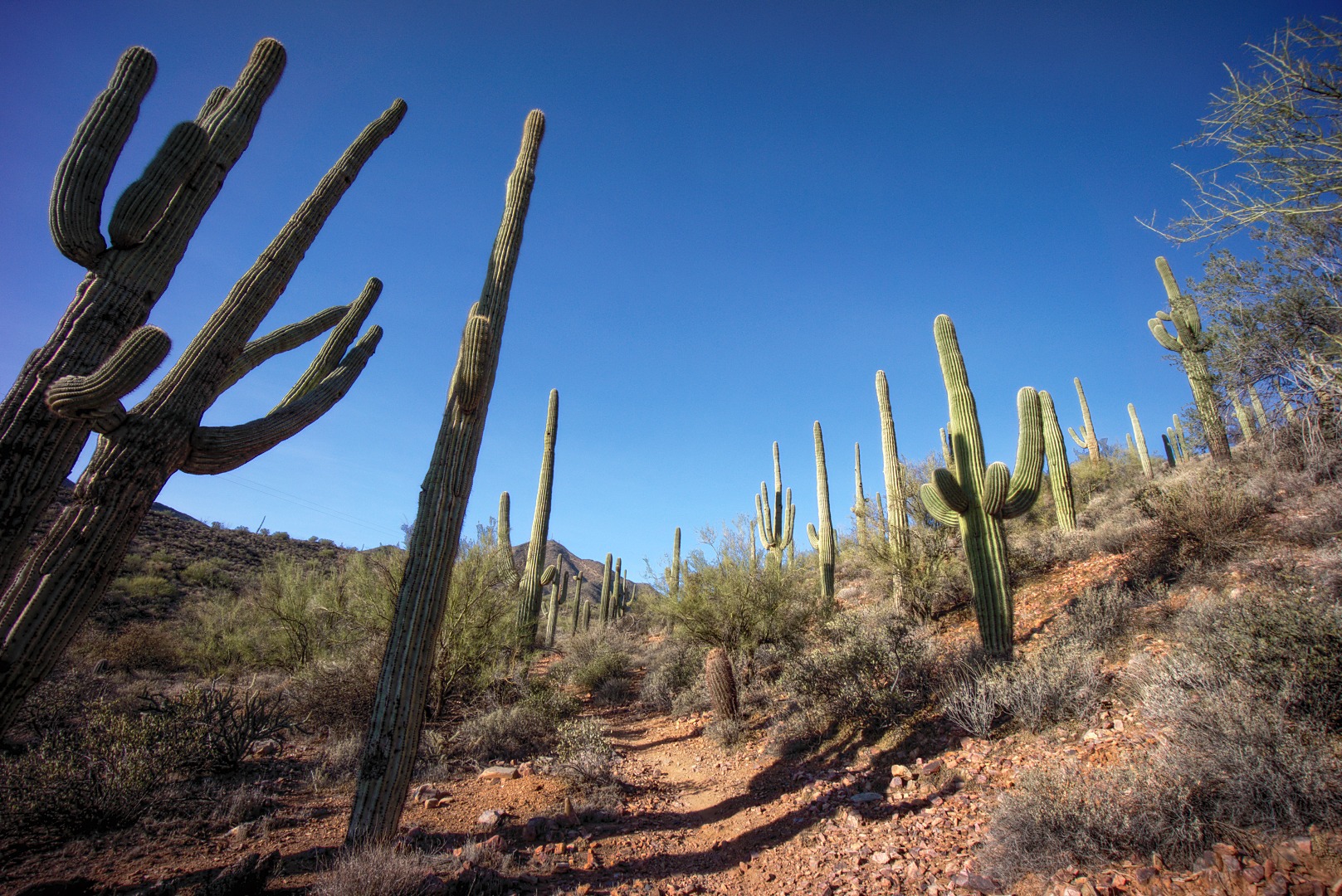 The windmill, for which the Windmill Trail was named: 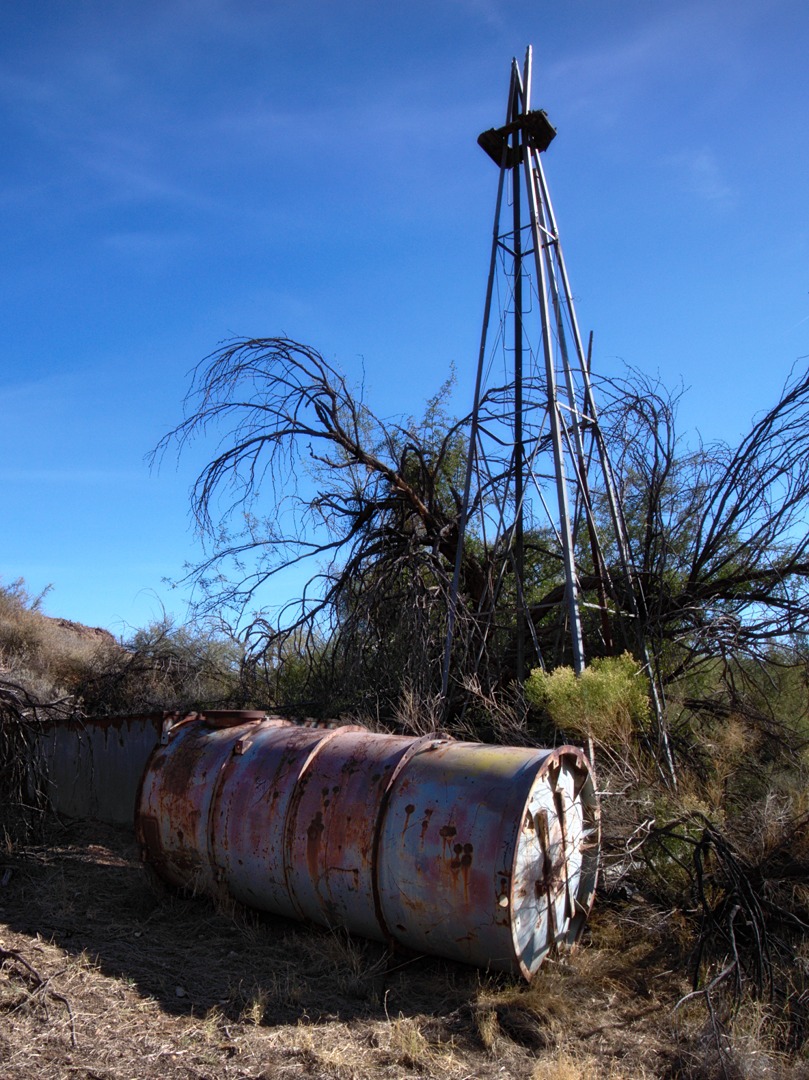 This large cottonwood is near the windmill.  It makes for a better landmark than the windmill itself since the windmill can be kind of hard to see from the Windmill Trail. 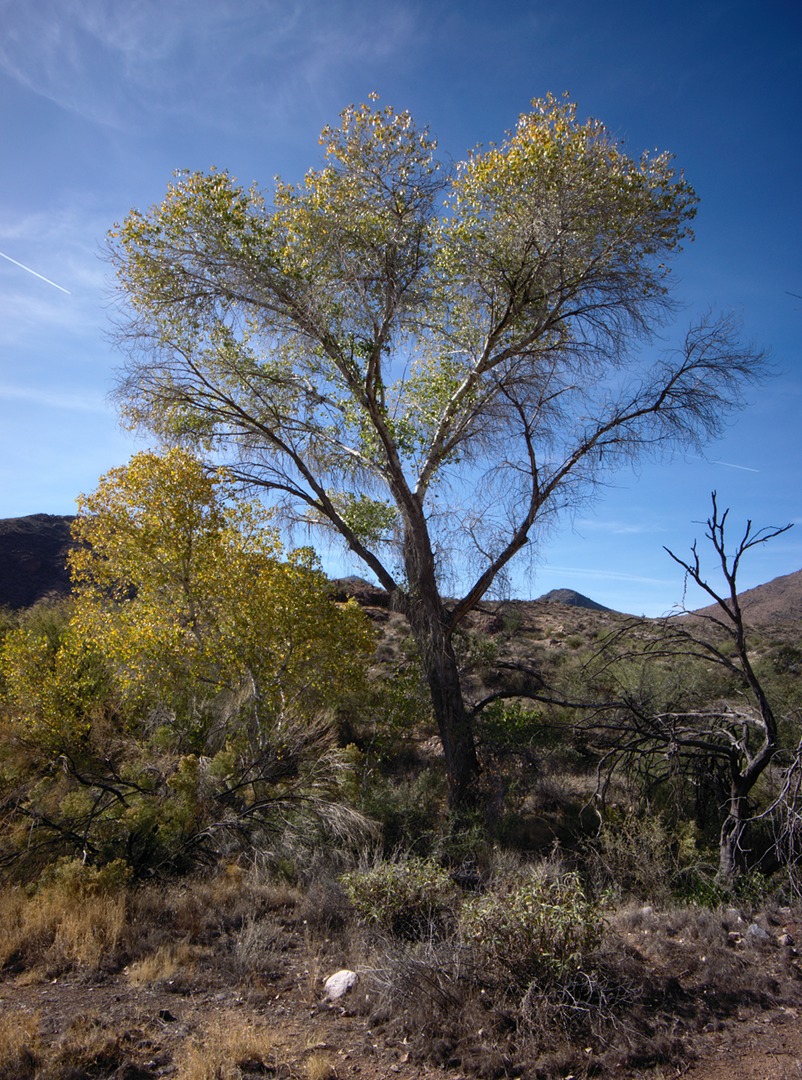 Another view of the cottonwood and the bullet-ridden storage tank: 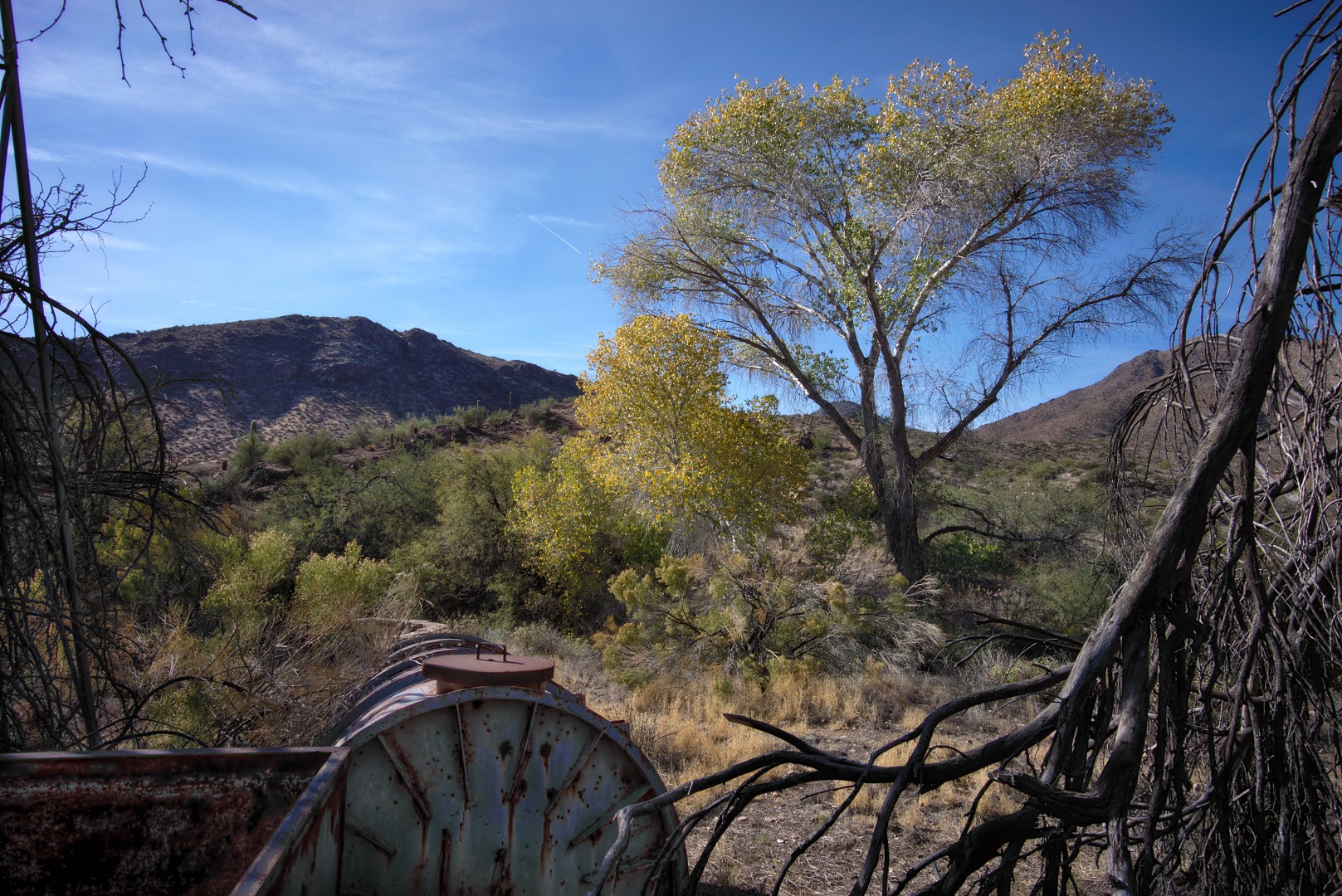 Looking up through the dead tree at the right in the previous photo: 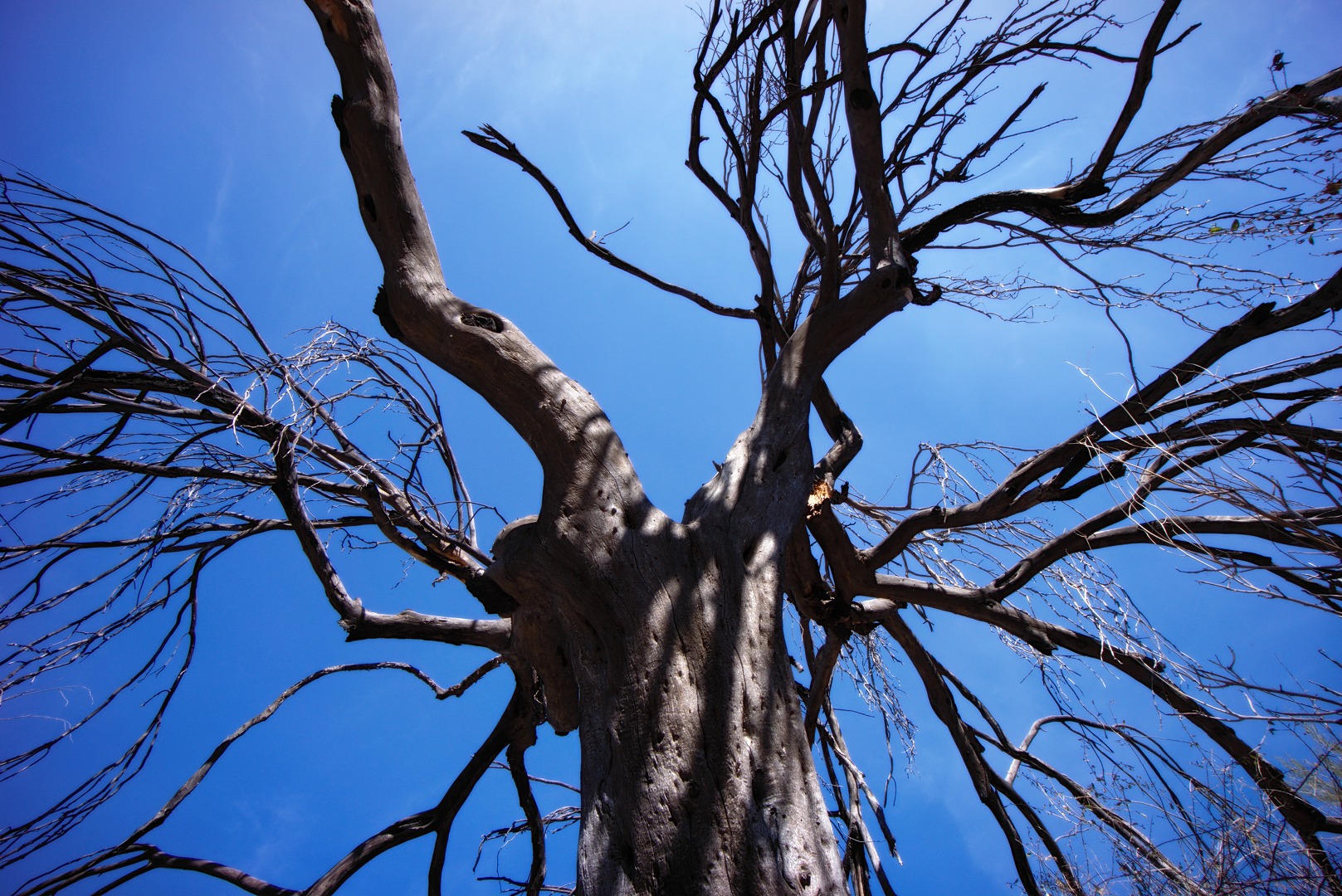 A view from the Coachwhip Trail. 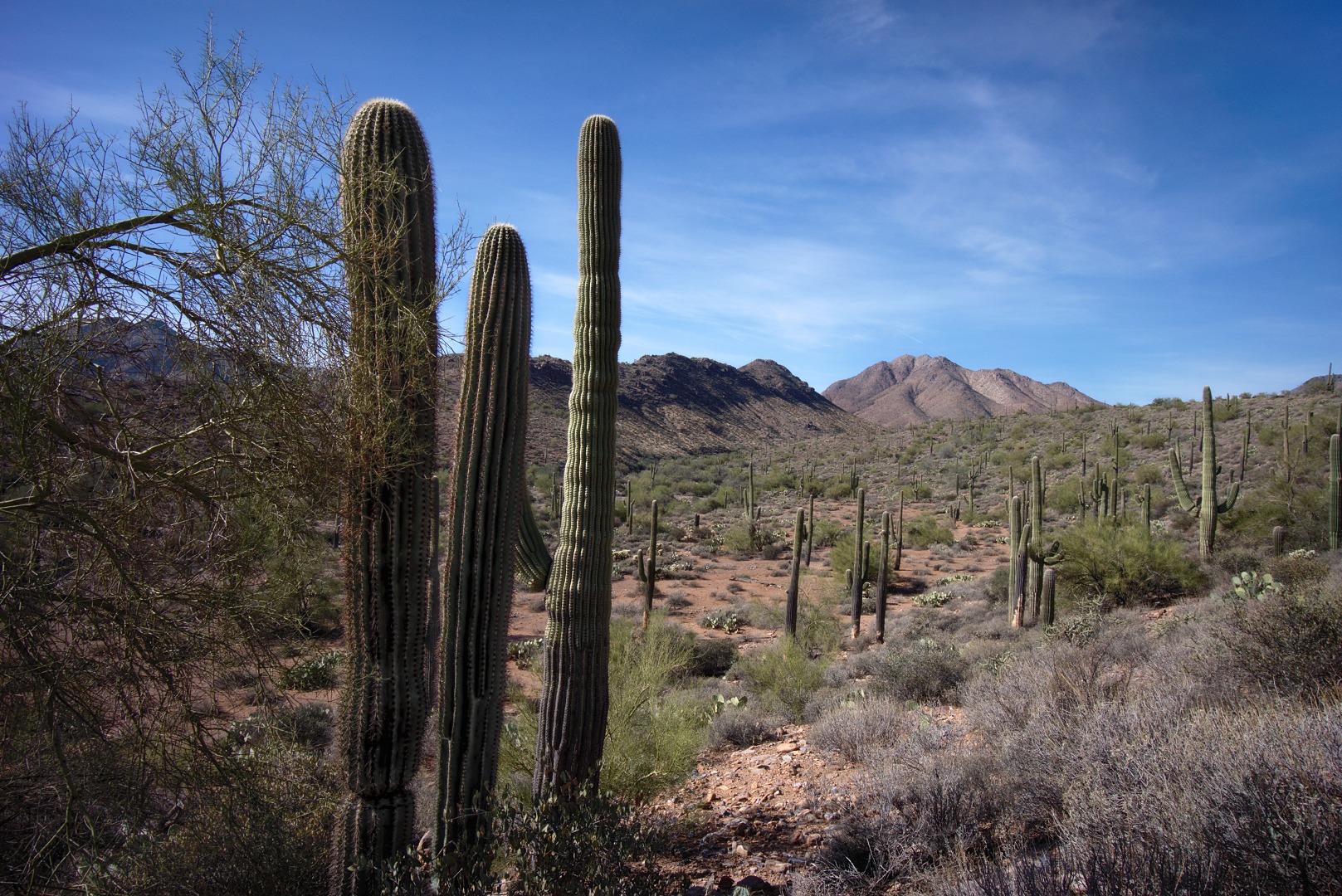 Another view from further down the Coachwhip Trail: 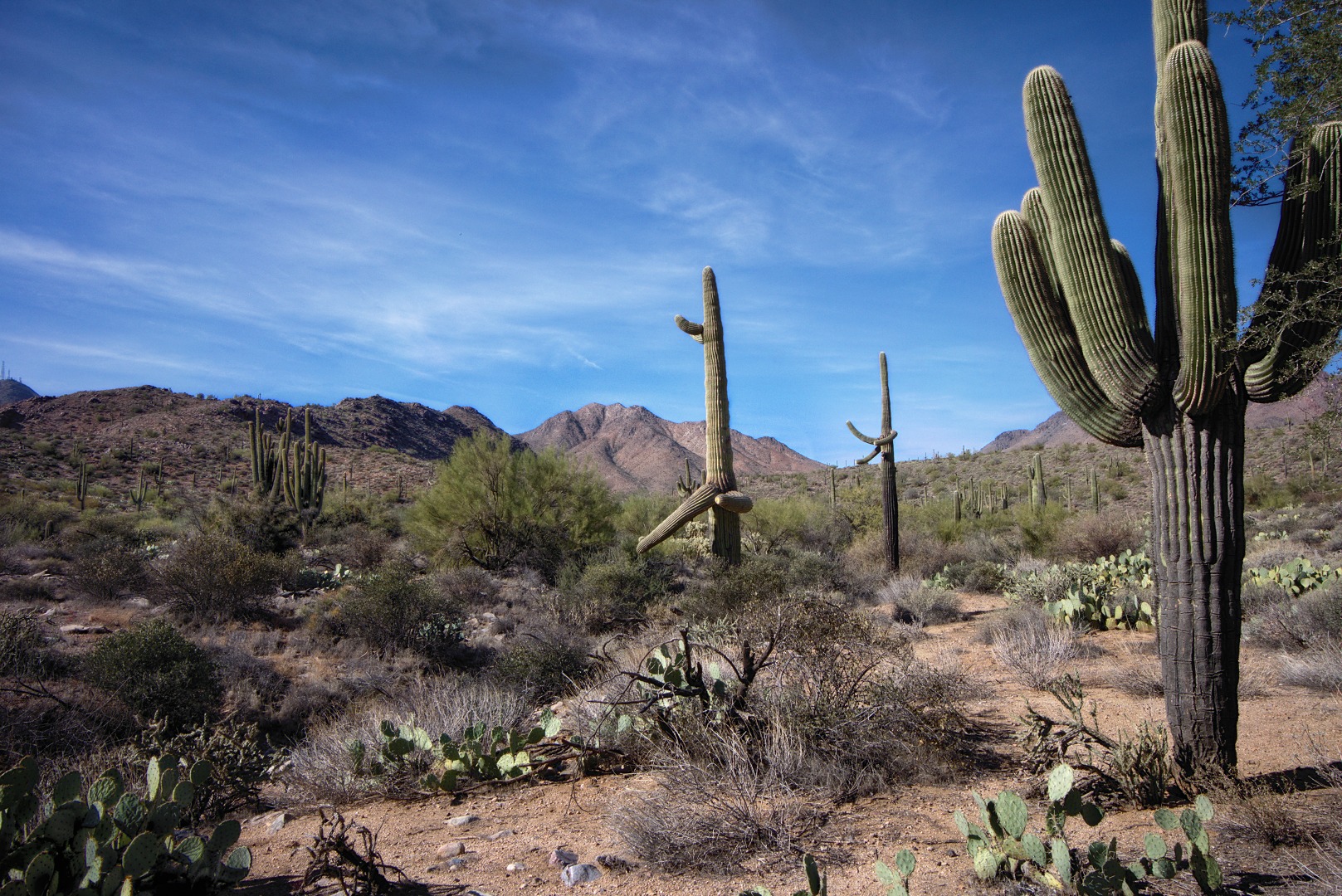 Bob, Janet, and Linda pass the turnoff to the mine on the way back: 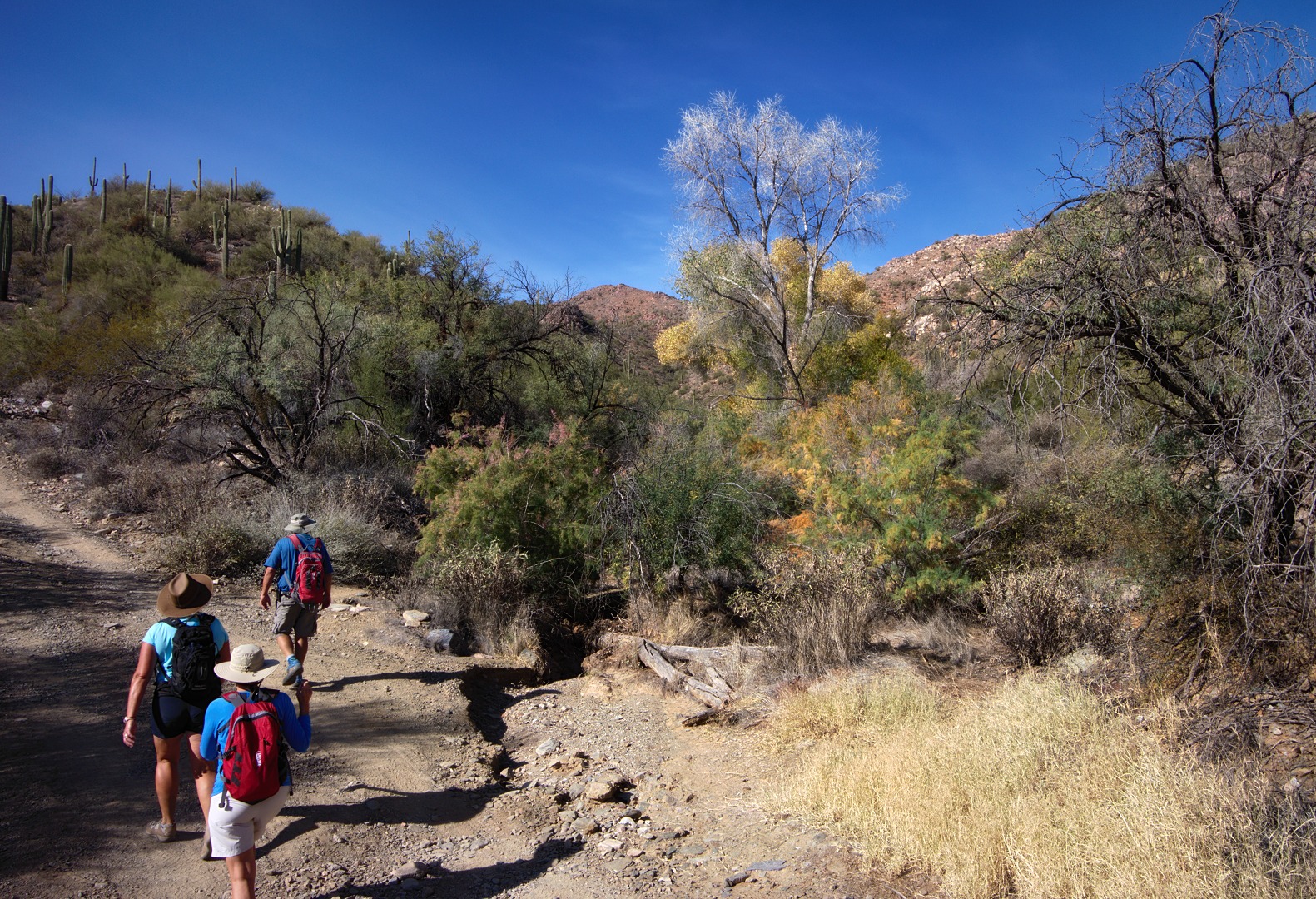