On the Friday during our week long stay in Moab during June of 2012, we got up really early in the morning and visited the Island in the Sky district of Canyonlands National Park. We visited three areas of the park that day, the Grand Viewpoint, the Green River Overlook, and Upheaval Dome.

One of the first things you see when you look over the railing at the end of the sidewalk leading from the parking lot is Monument Basin: 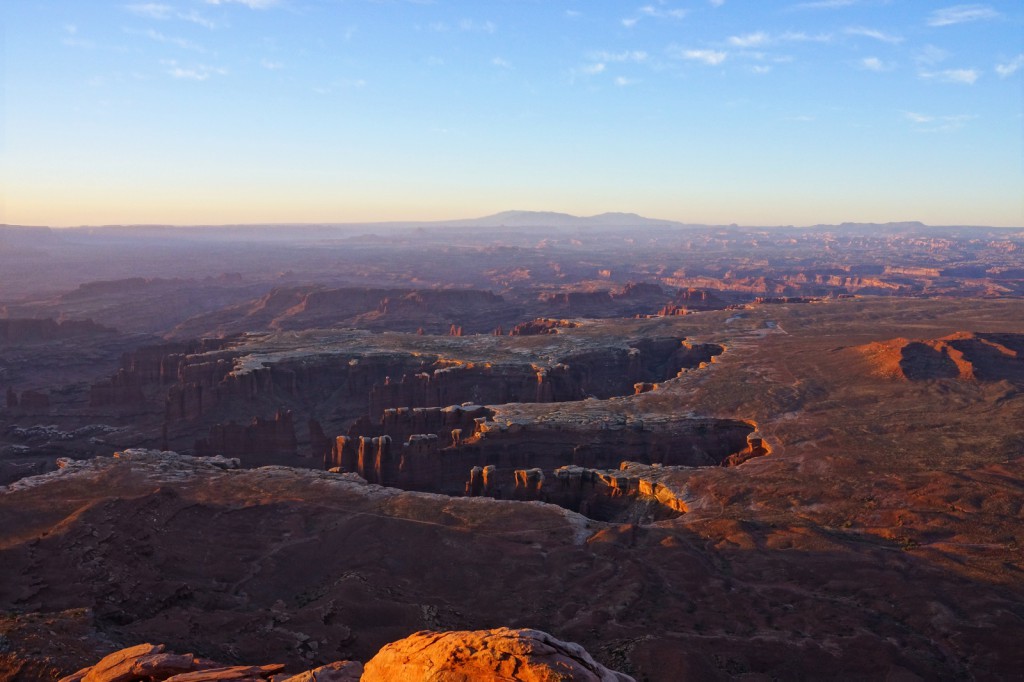 This photo was taken just shortly after sunrise.  The whitish areas at the edge of that plateau is the White Rim.  There is a road, a hundred miles long, that follows the white rim, going completely around the Island in the Sky.  Mountain Bikers can ride the White Rim and those with suitable vehicles can drive it.  Below is a closer view of part of Monument Basin, showing the road.  I really like the way the early morning sun lights up the edges of the basin.  If you can, take a look at an enlarged version of this photo on a high resolution monitor.  It is really quite stunning. 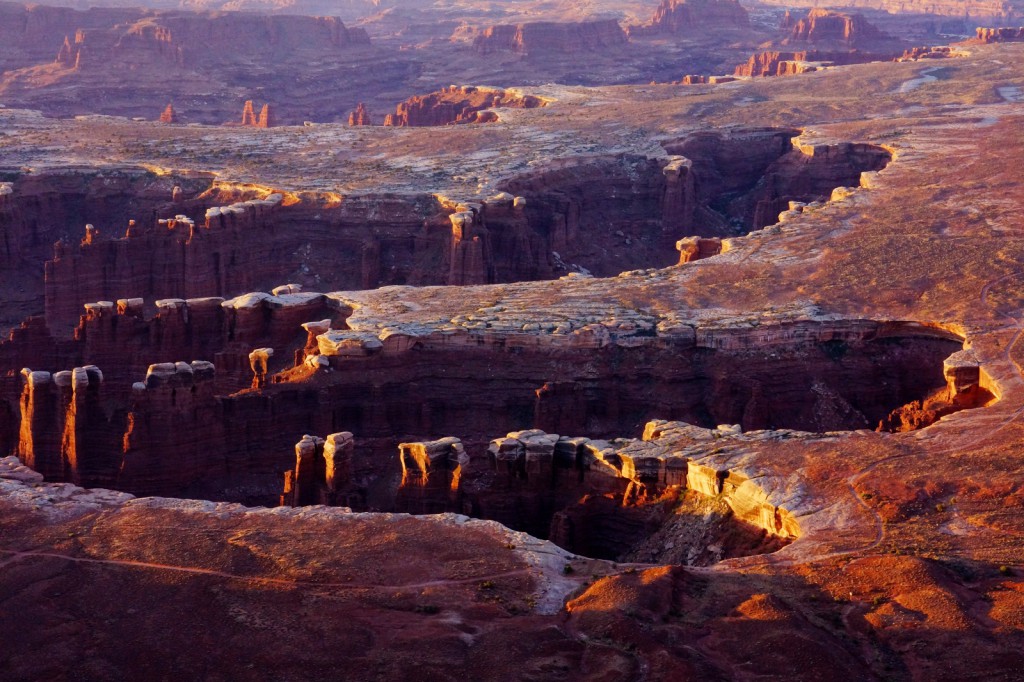 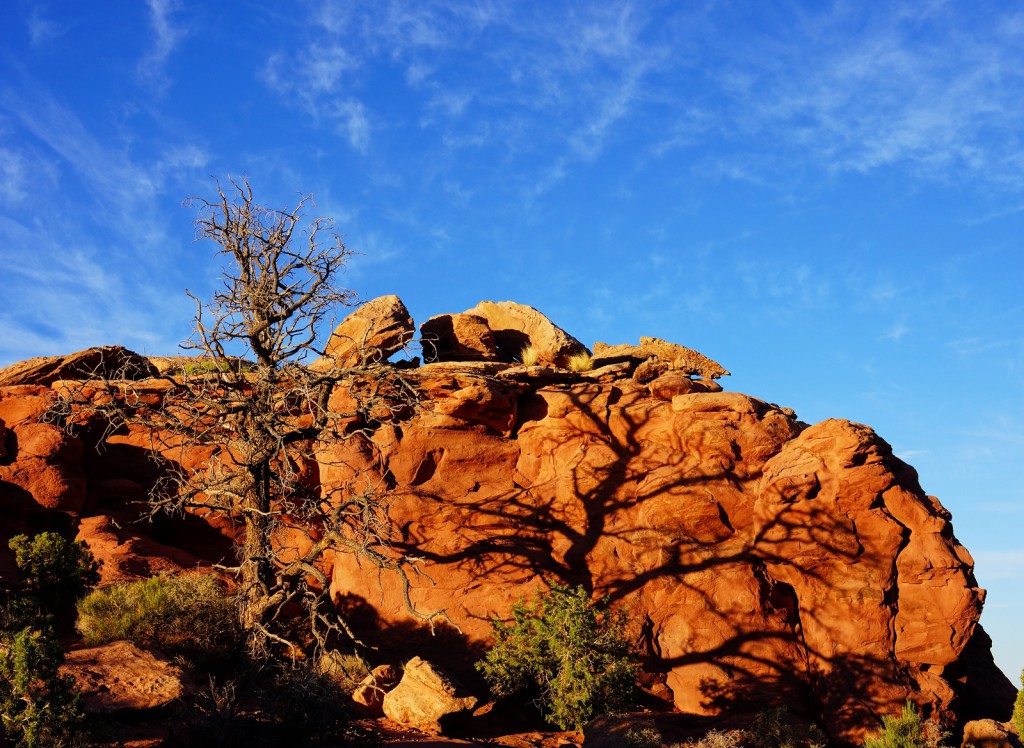 I took this photo near the end of the Grand Viewpoint Overlook Trail.  Candlestick tower can be seen at the right in this photo. 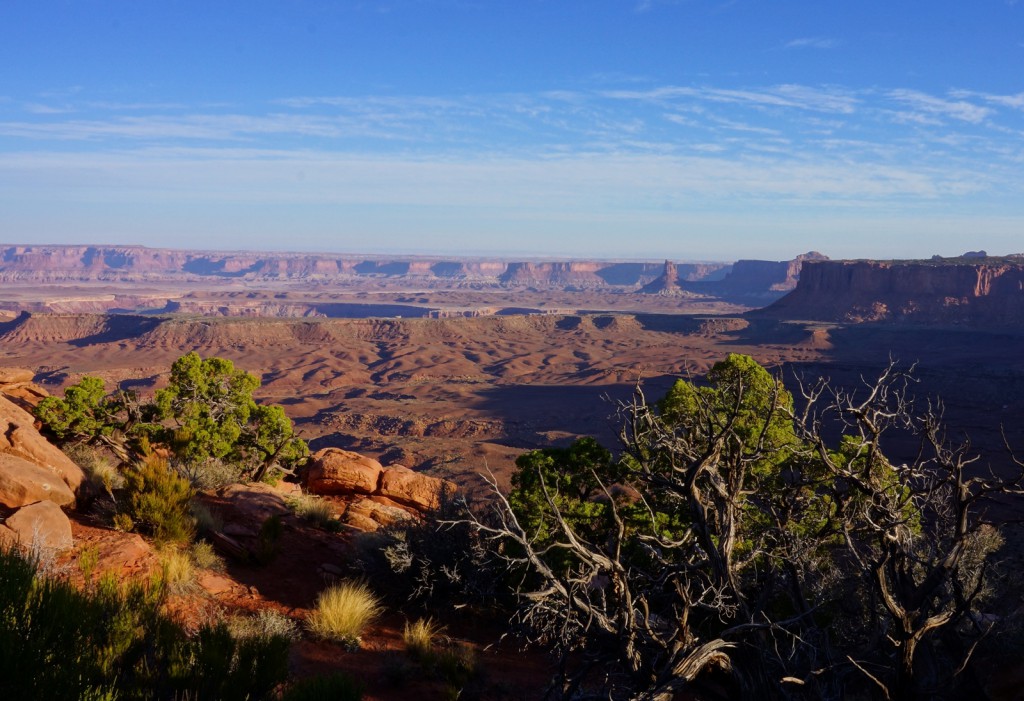 Here is a better view of Candlestick Tower, as seen from the Grand Viewpoint Overlook Trail: 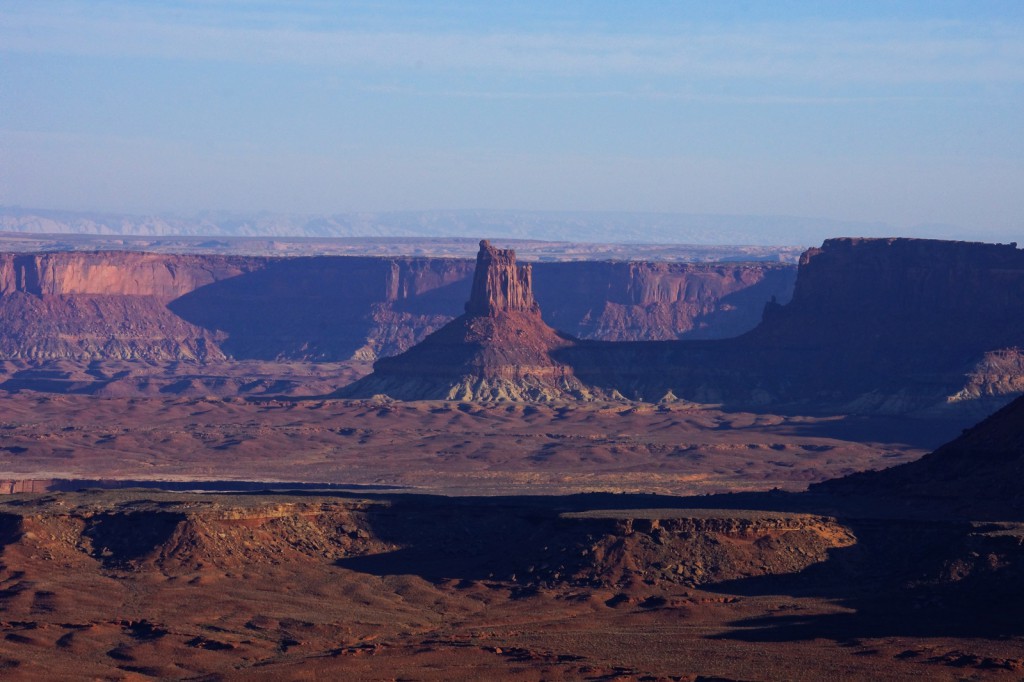 Upon leaving the Grand Viewpoint, we drove a short distance to another view area.  I got a photo of Marilyn using her tripod and Marie sitting down an what looks to be a comfortable step, enjoying the view. 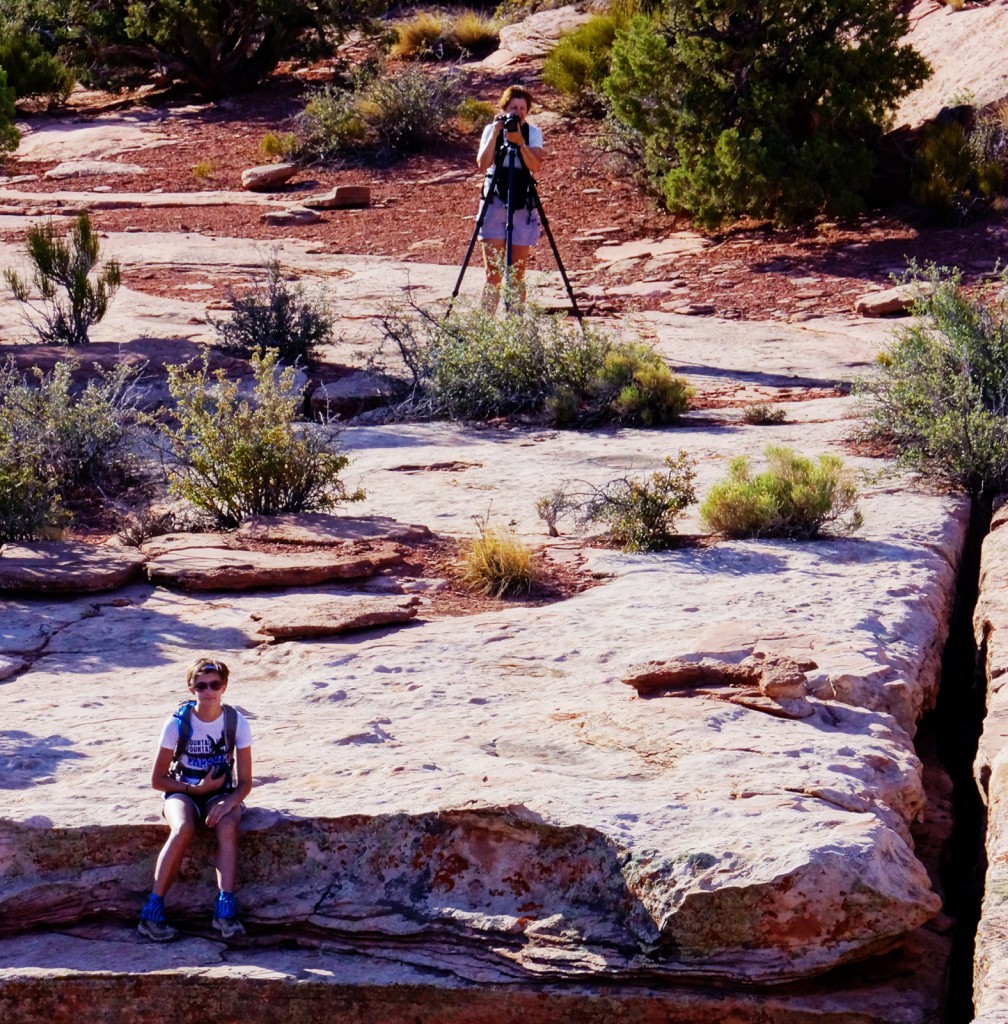 This next photo provides a more expansive view of Marie’s perch! 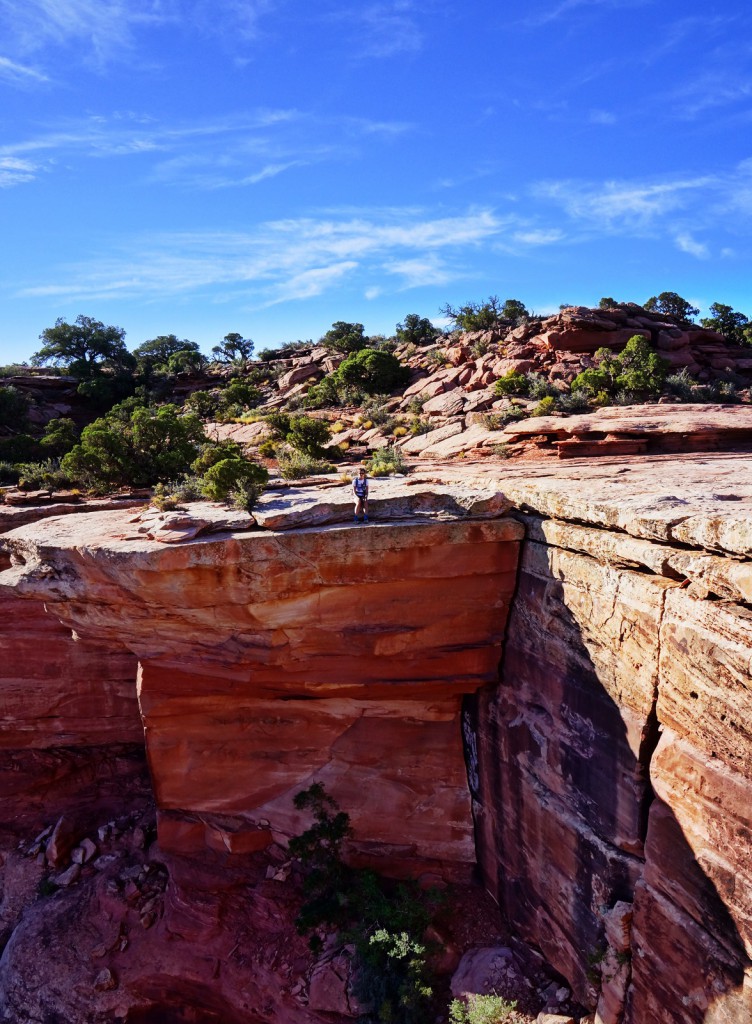 After hiking the Grand Viewpoint Overlook Trail, enjoying the views, and taking lots of photos, our next stop was the Green River Overlook.  Below, Marie stands at one of the fenced viewing areas. 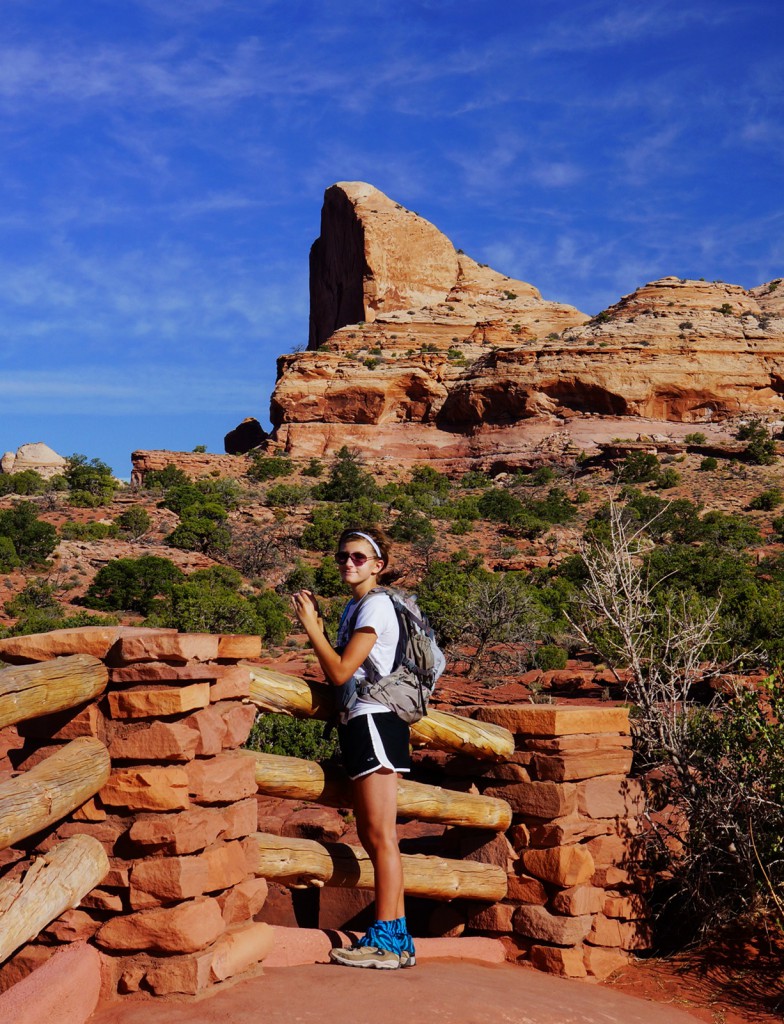 This photo, below, is a view of Soda Springs Basin.  Ekker Butte can be see in the center of the photo just below the horizon.  Turks Head is the much shorter butte next to the Green River at the far right in this photo. 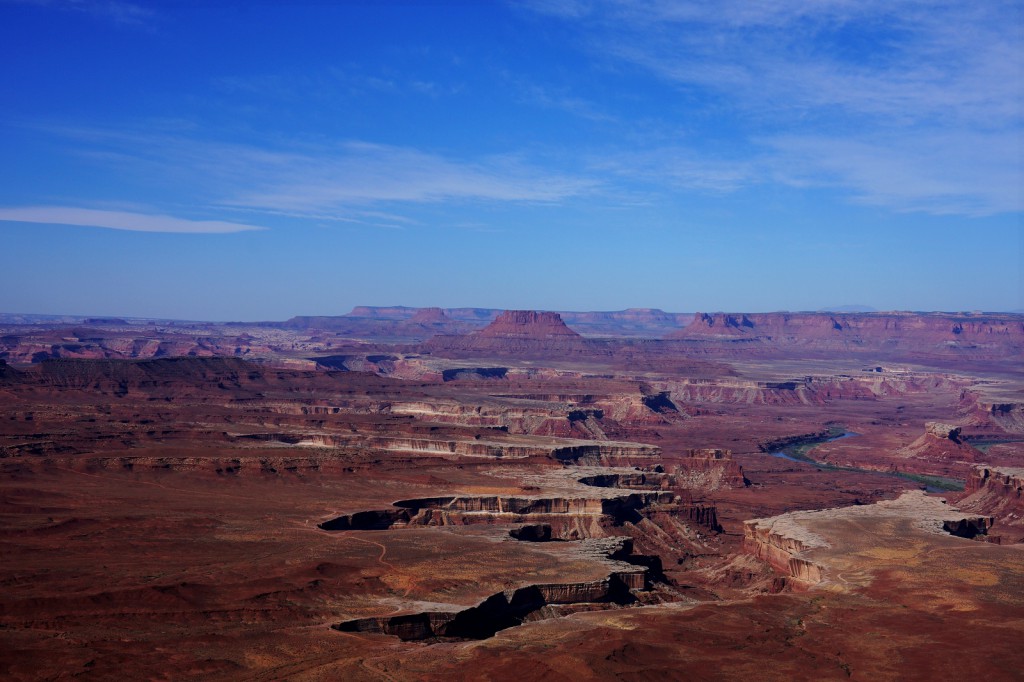 Here is a view of Candlestick Tower taken from near the Green River Overlook: 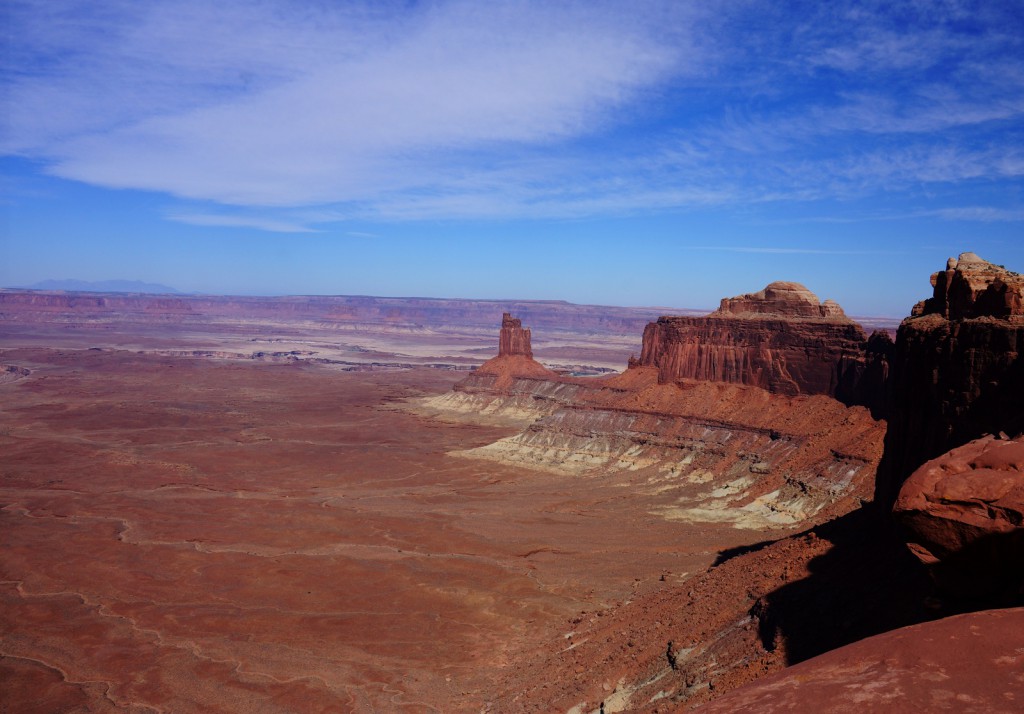 Another, closer, view of Candlestick Tower: 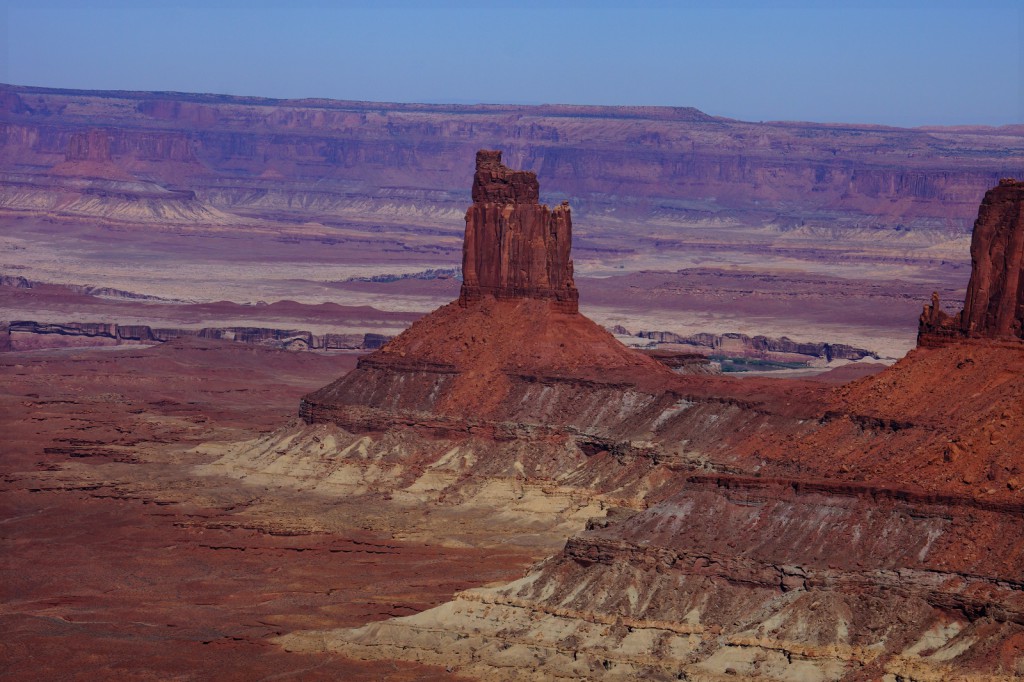 Below is an even better view of Turks Head with the Green River snaking around it. 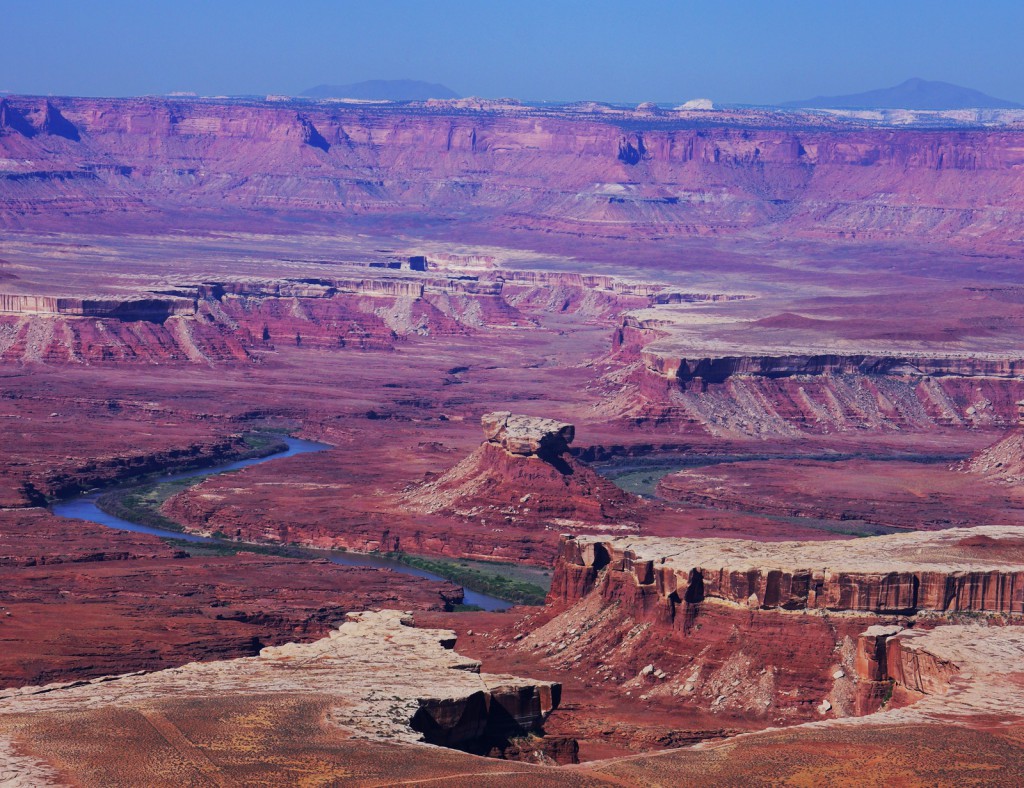 A closer view of Ekker Butte: 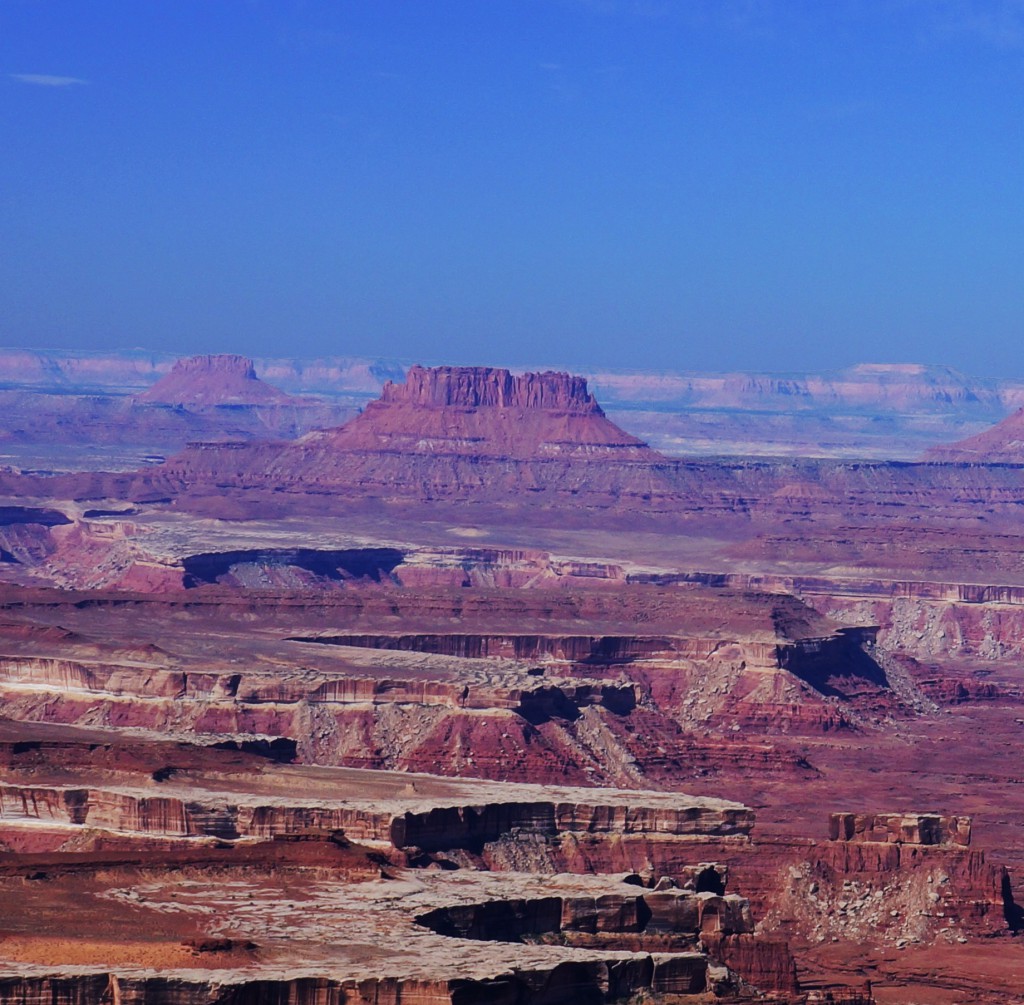 Our last stop for the day was Upheaval Dome.  There is a short, but steep trail – many of the trails in the Moab area are steep – which leads from the parking area to an overlook where Upheaval Dome can be viewed: 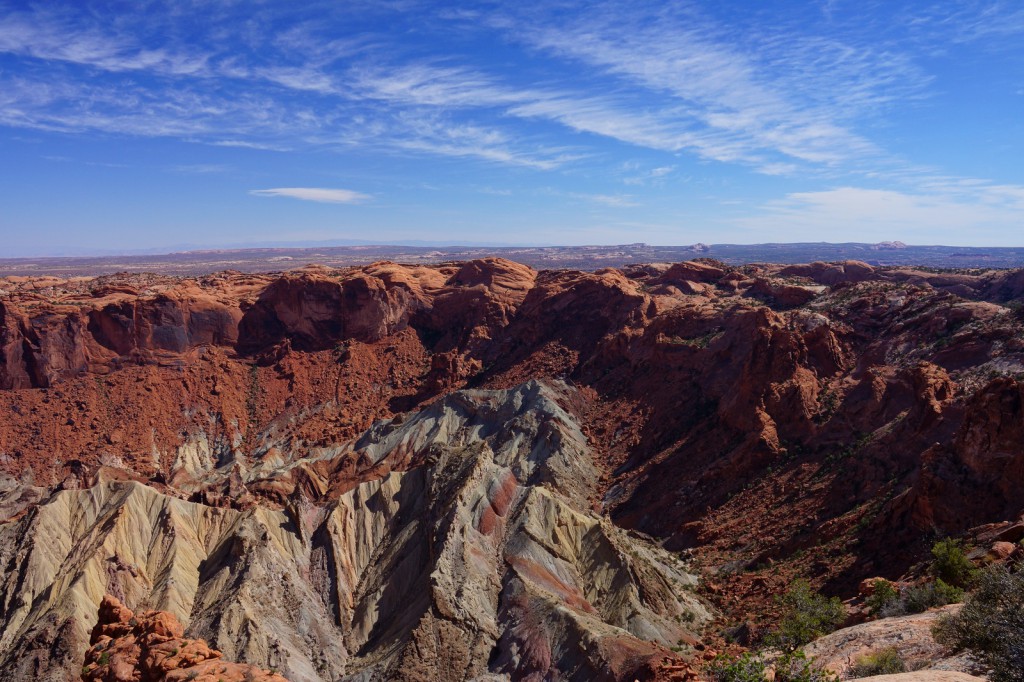 Here, Marie watches a lizard at the overlook area. 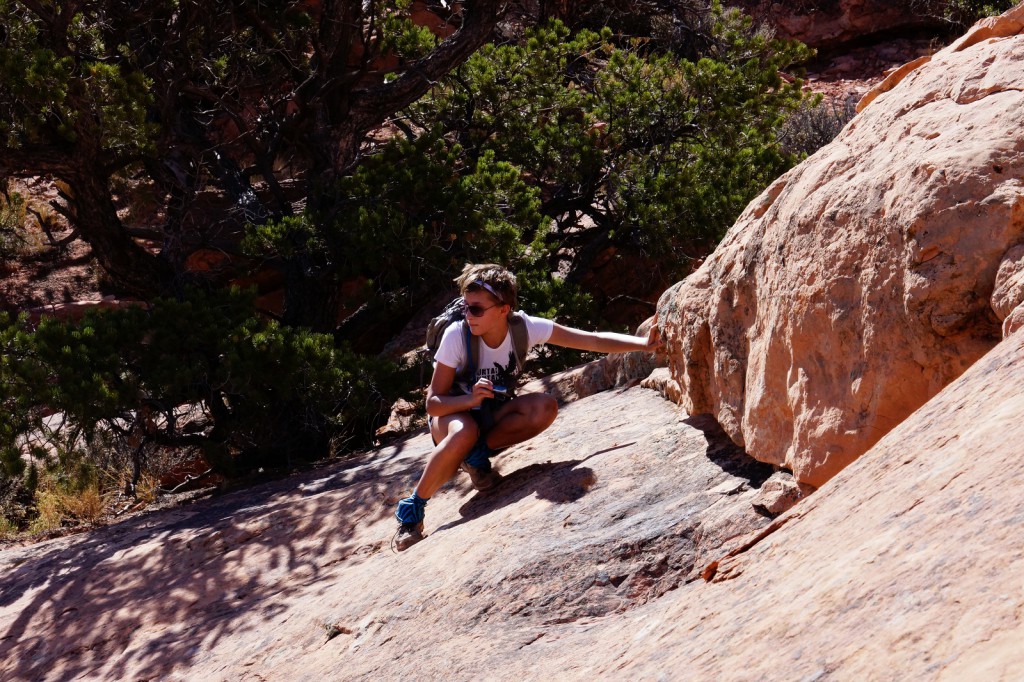 There is another trail which leads from the main overlook to an alternate view area.  This is a very fun trail to hike – it’d be worth hiking it even if there wasn’t another viewpoint of Upheaval Dome at the end.  There is lots of going up and down slickrock involved.  The park has cut steps for going up and down the slickrock in some areas, but they’re not really needed.  Here’s a view of a small part of the trail. 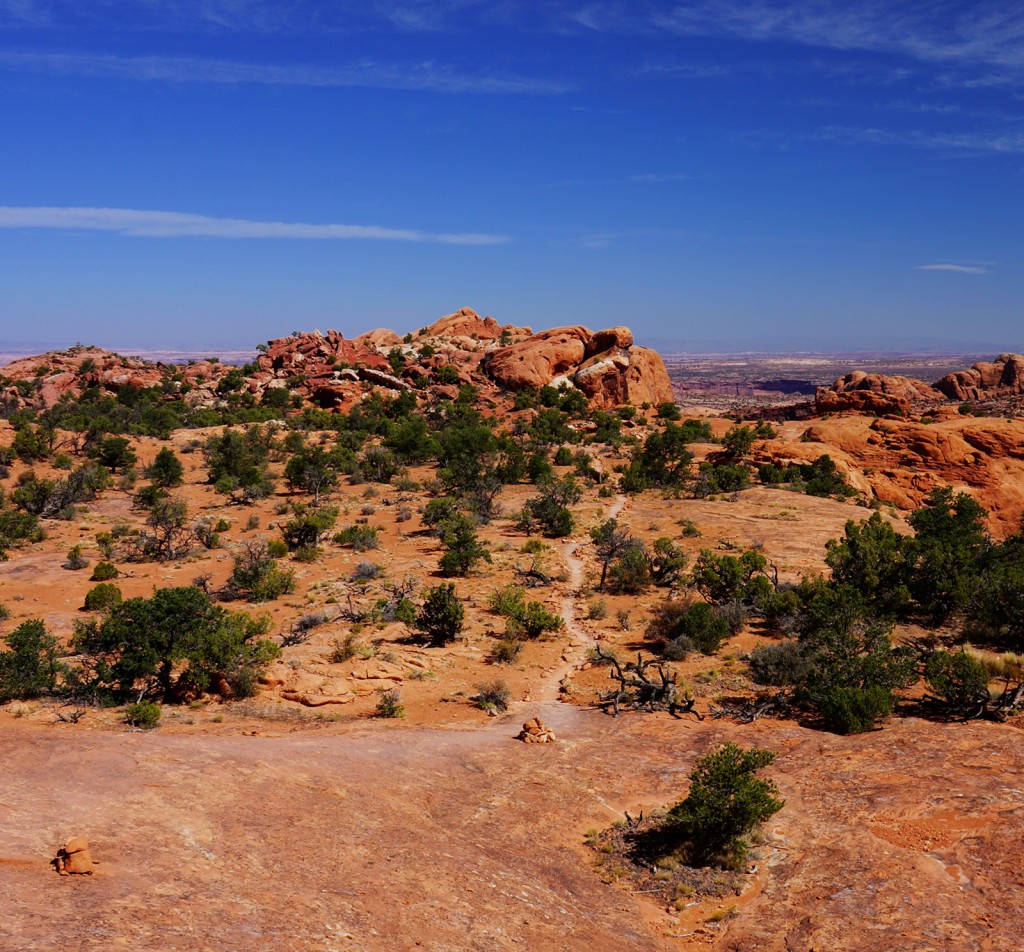 Here is the view of Upheaval Dome from near the alternate viewpoint.  The view is actually better if you walk a short ways down from the fenced in area to the edge. 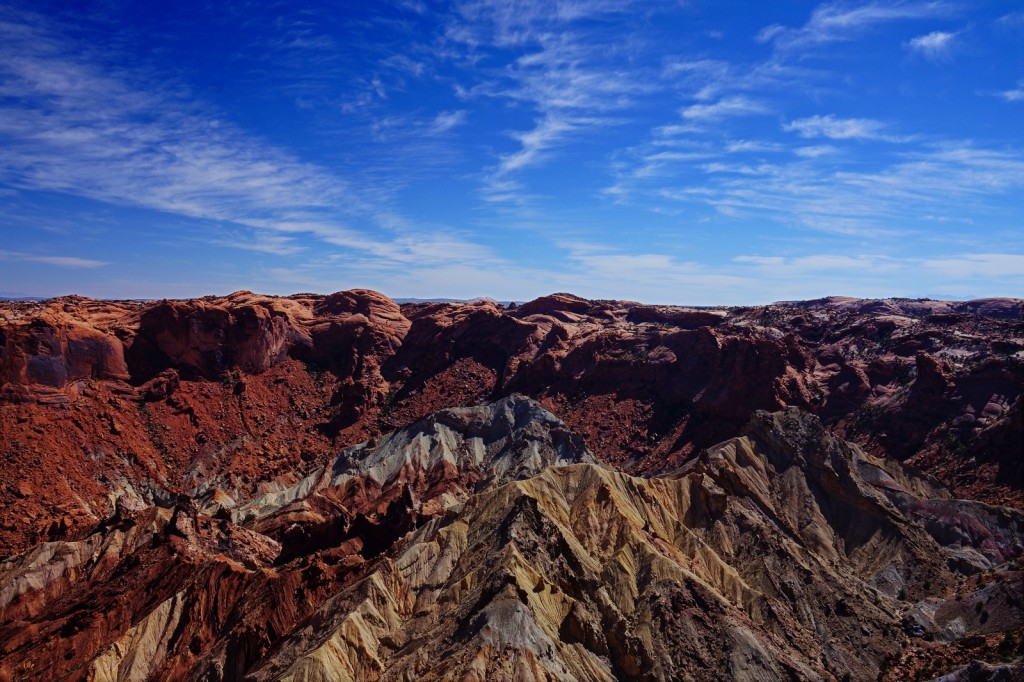 Another view of Upheaval Dome, looking down more into the crater.  One of the theories regarding its formation is that it may have caused by a meteor impact.  The other theory is that a dome of salt pushed it up from underneath.  Signs at the main overlook discuss and illustrate these two theories. 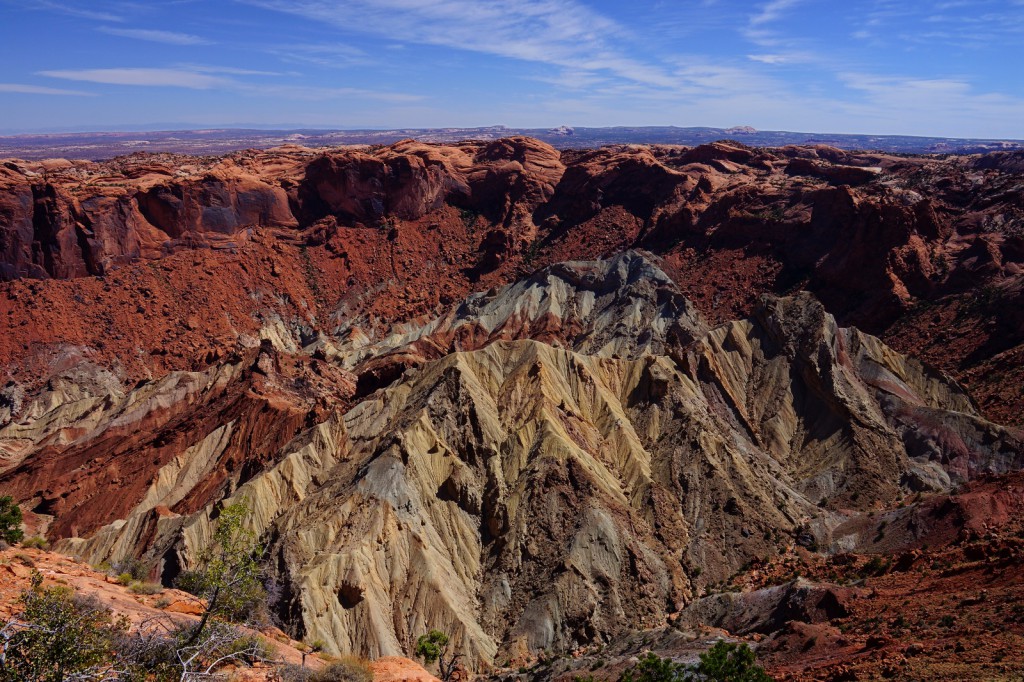