I hiked 11 miles on Friday, July 26.  It was a “wash” day – I traveled through washes for the majority of the hike.

I saw many animals.  In addition to the rabbits, hawks, and lizards that I see on many hikes, I saw a total of five deer! I saw the first one as I was nearing my turn into one of the feeder washes off of Stoneman Wash.  Later on, after crossing Pemberton, I saw another two deer while in that same wash. And, finally, much later in the hike, after reentering Stoneman Wash, I saw another two deer.

Shortly after seeing that first deer, I saw an owl flying up the wash.  I was able to get a photo of it after it landed on the wash bank. It flew even further up the wash, landing on a saguaro. I got some more photos of it on the saguaro, though only one photo had it looking towards me.

I hiked through one of the arroyos where we often see owls. I didn’t see any owls in that arroyo this time, but I did see a pack of Javelina! And, surprise, I also saw a bobcat stalking the Javelina. This surprised me as I had thought that Javelina would be too large for a bobcat to bring down. But, perhaps it might have been able to pick off a young Javelina.

Looking toward the Superstitions from the Pemberton Trail: 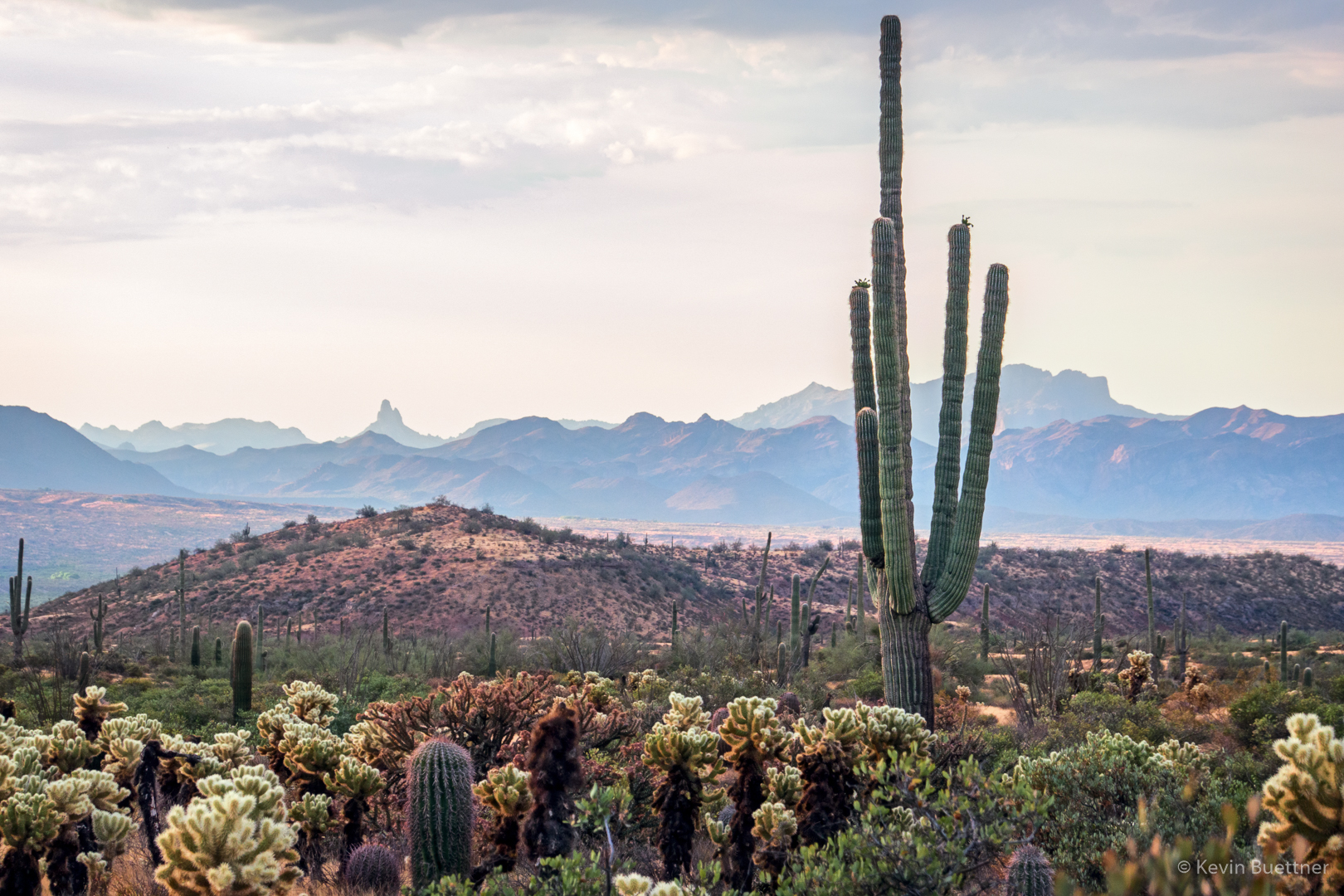 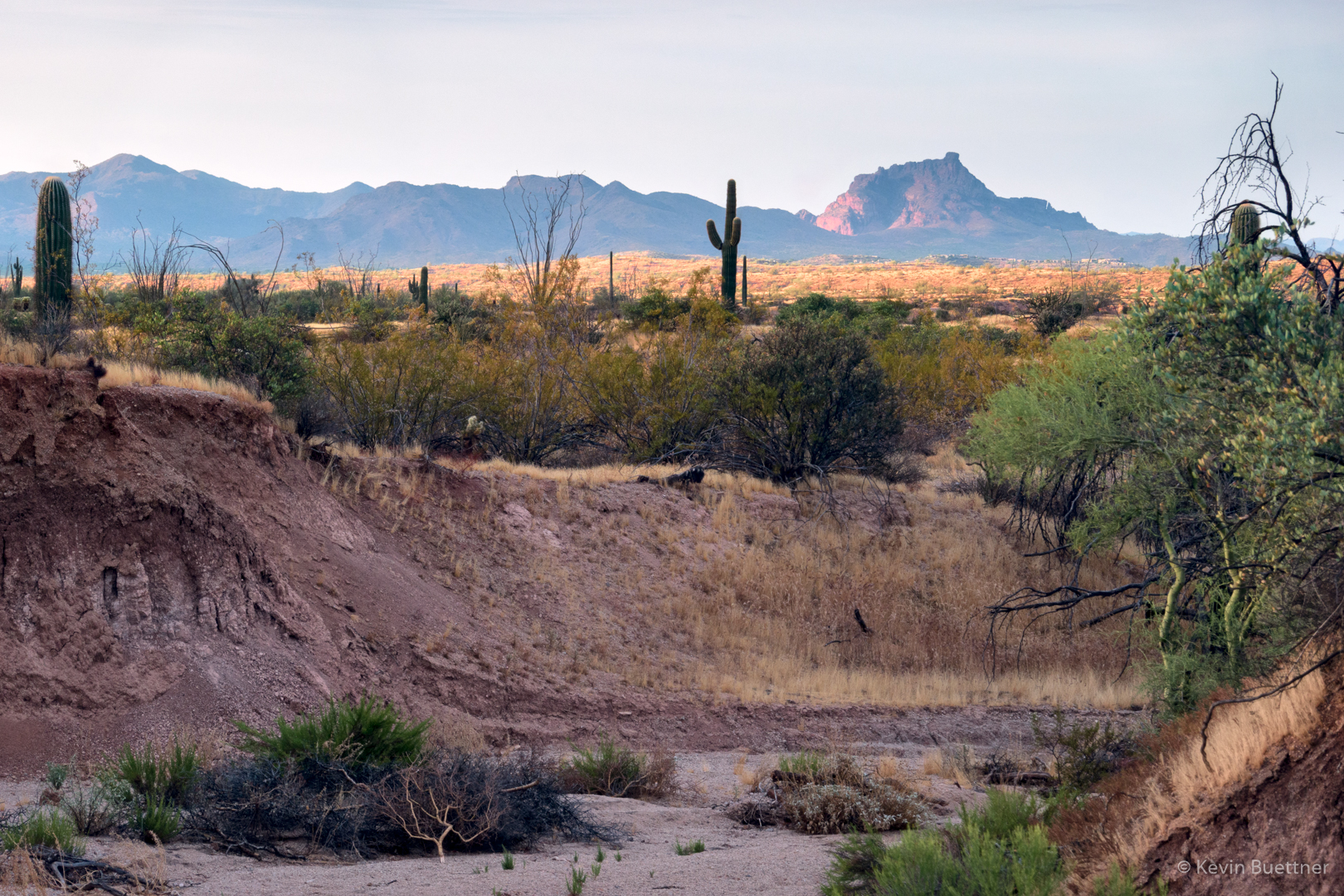 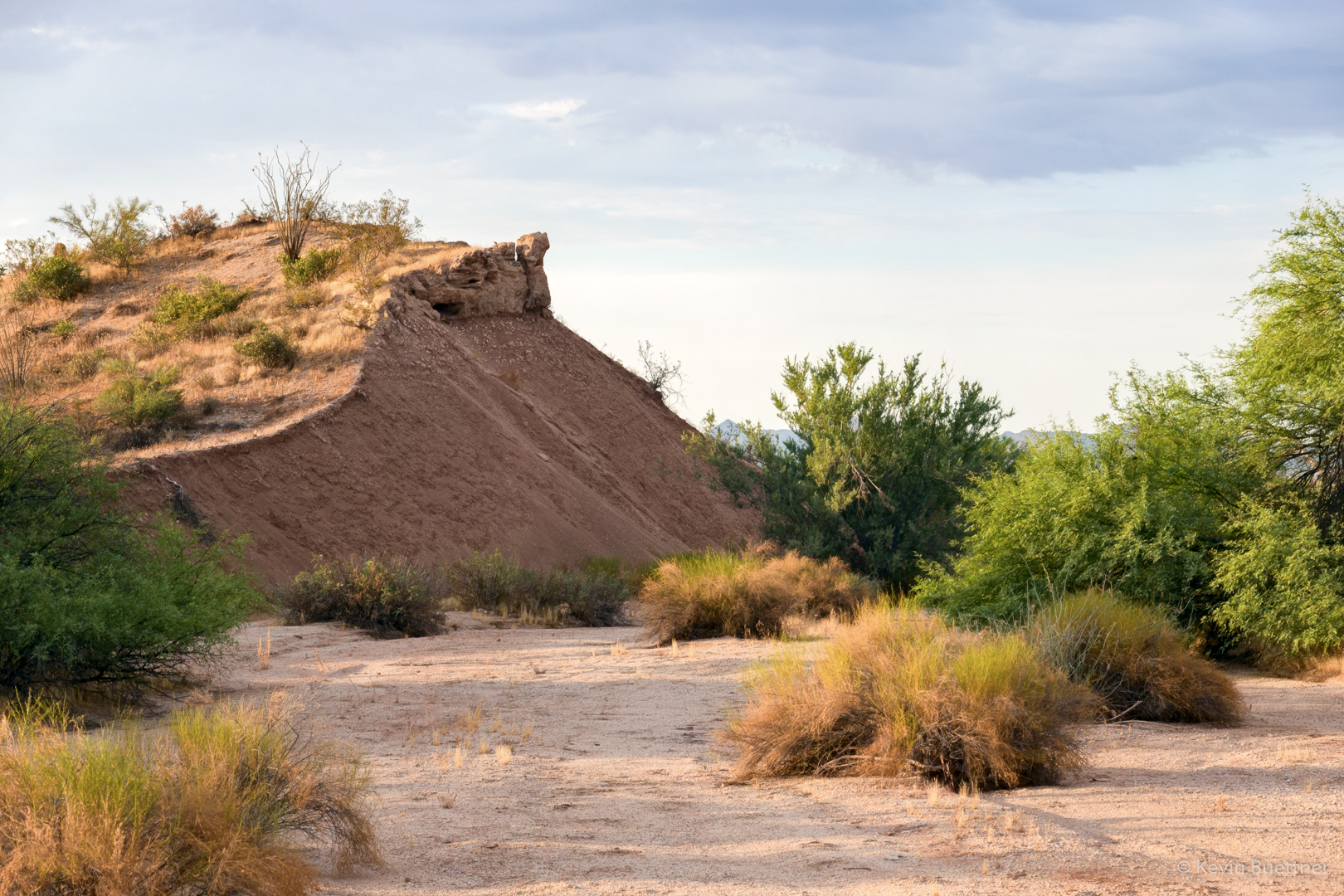 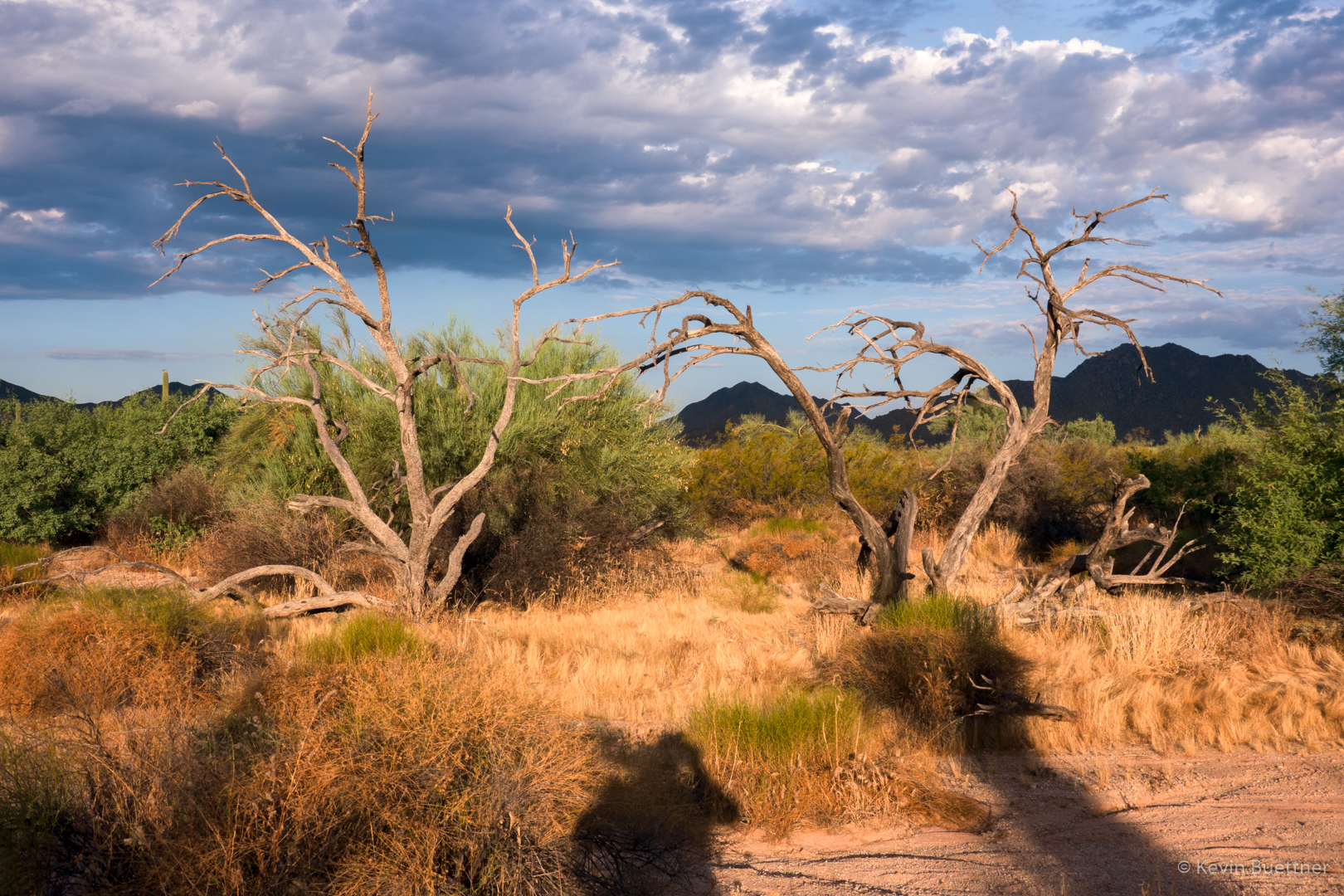 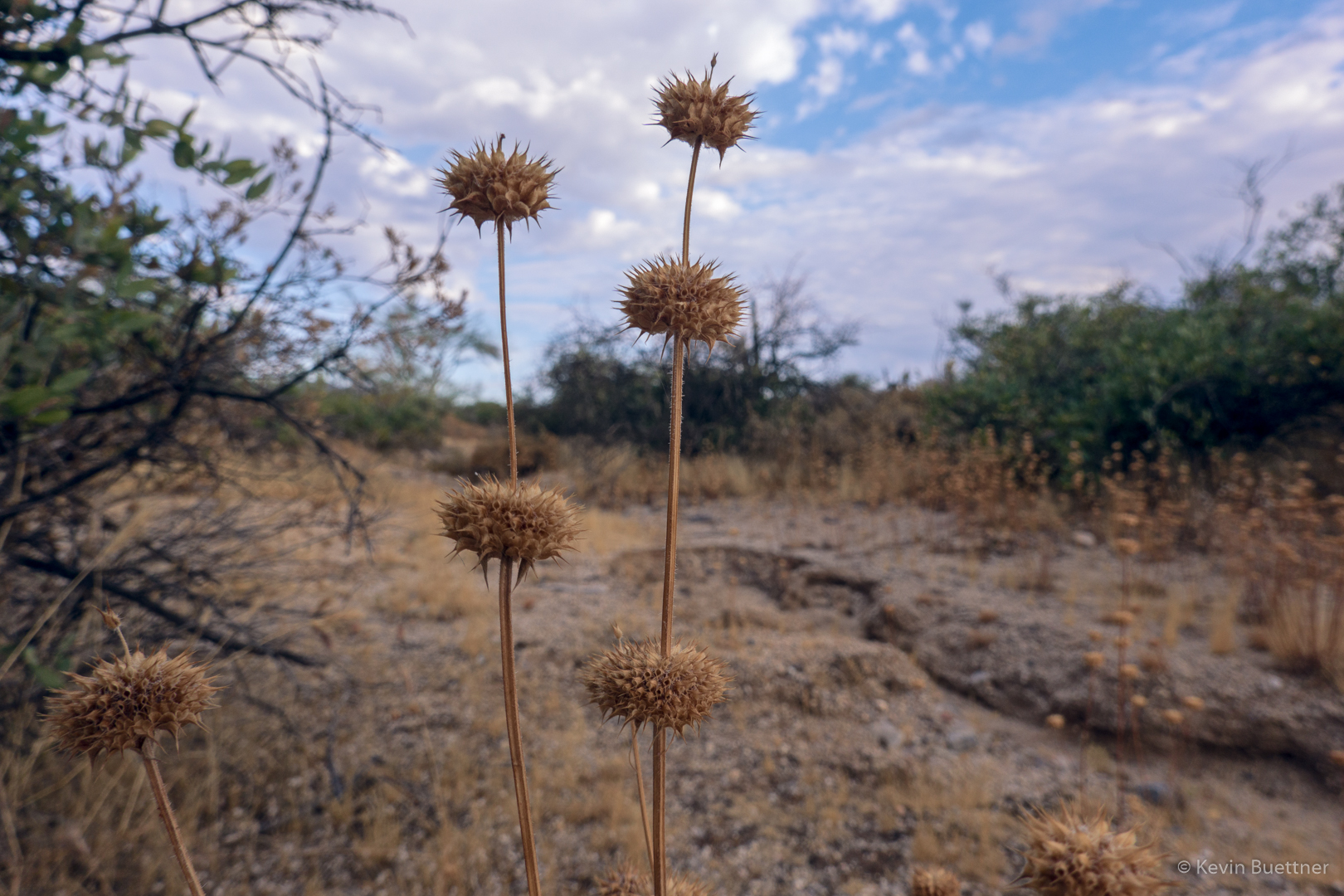 I think this is the same owl in the next two photos. 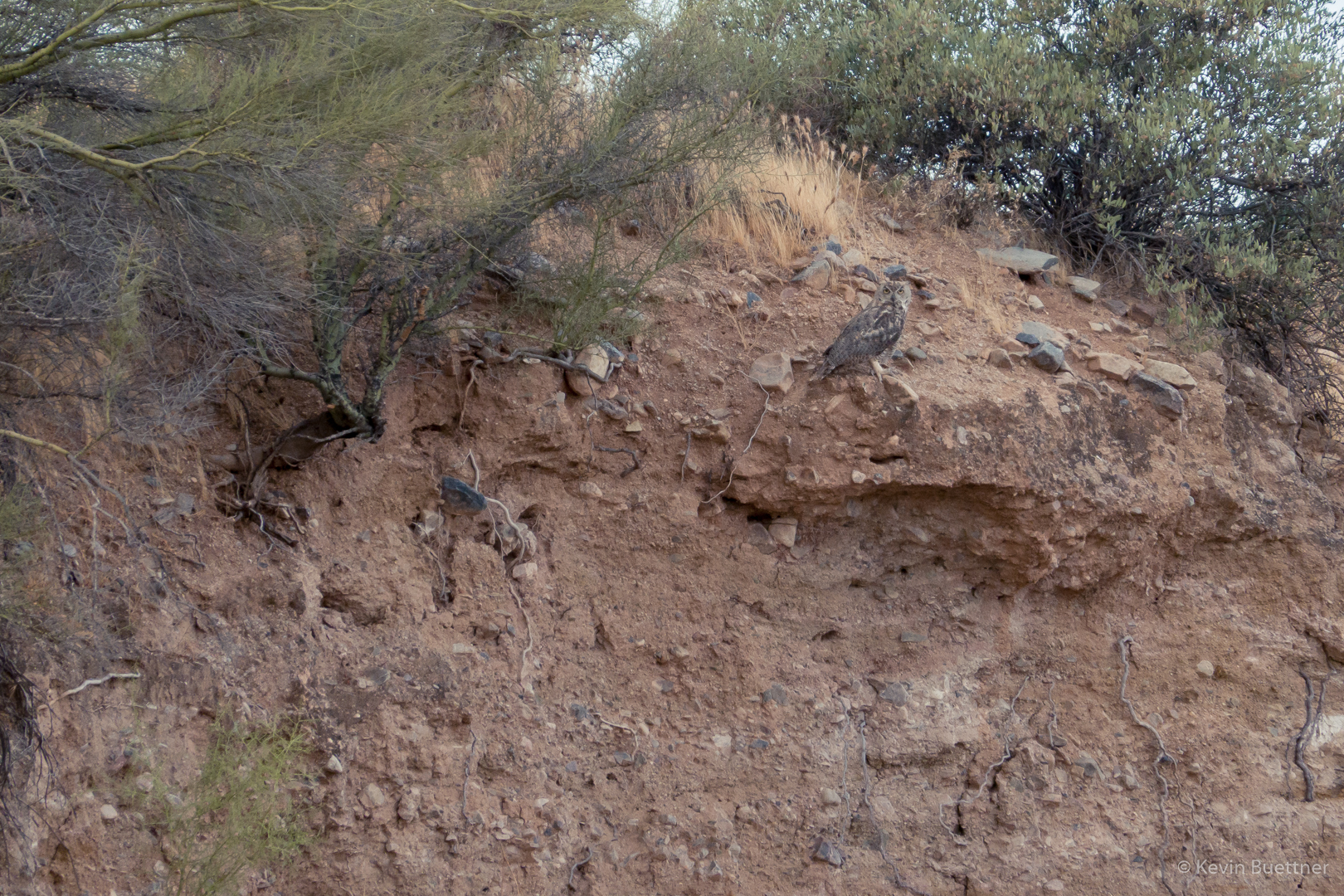 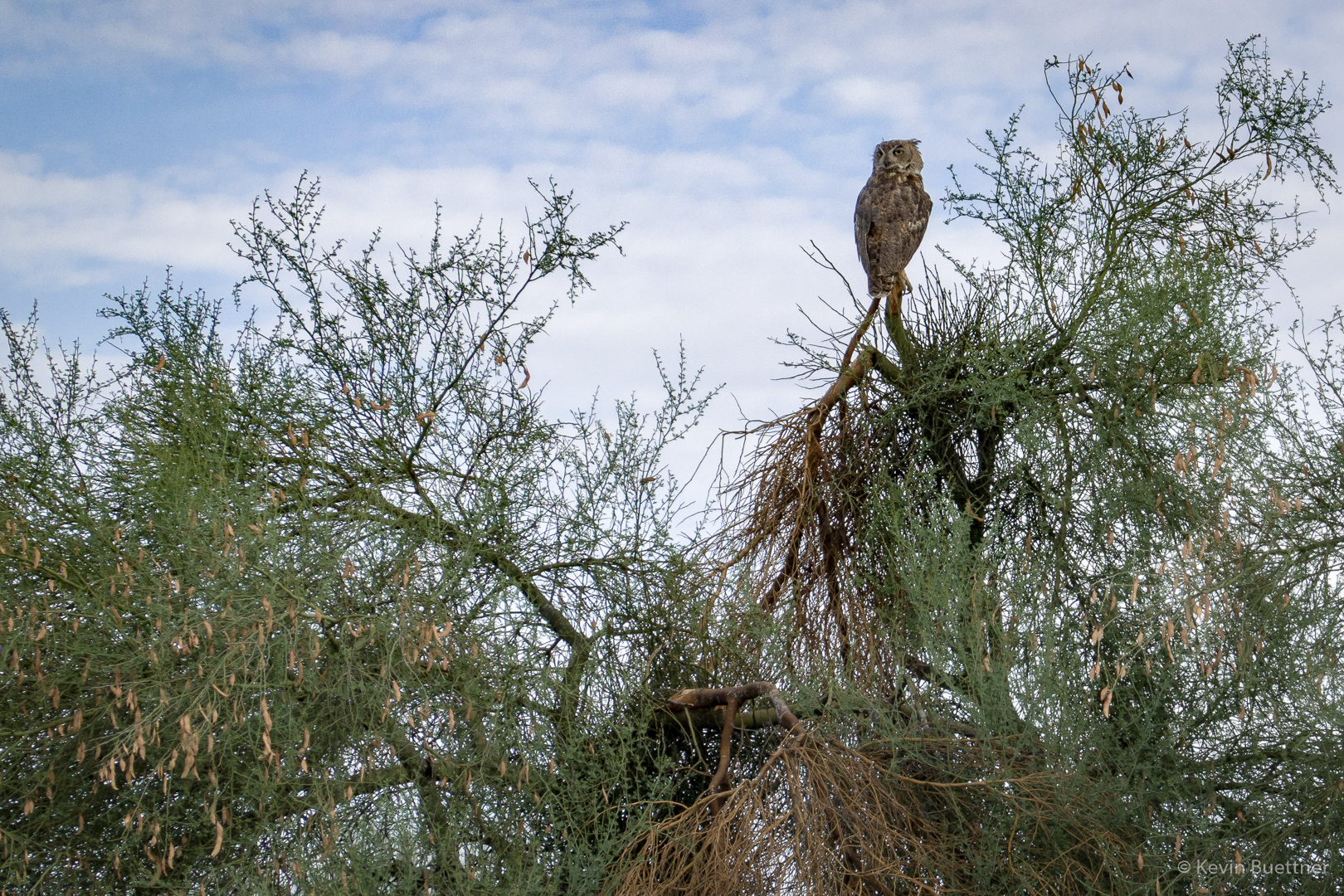 Looking toward the McDowells: 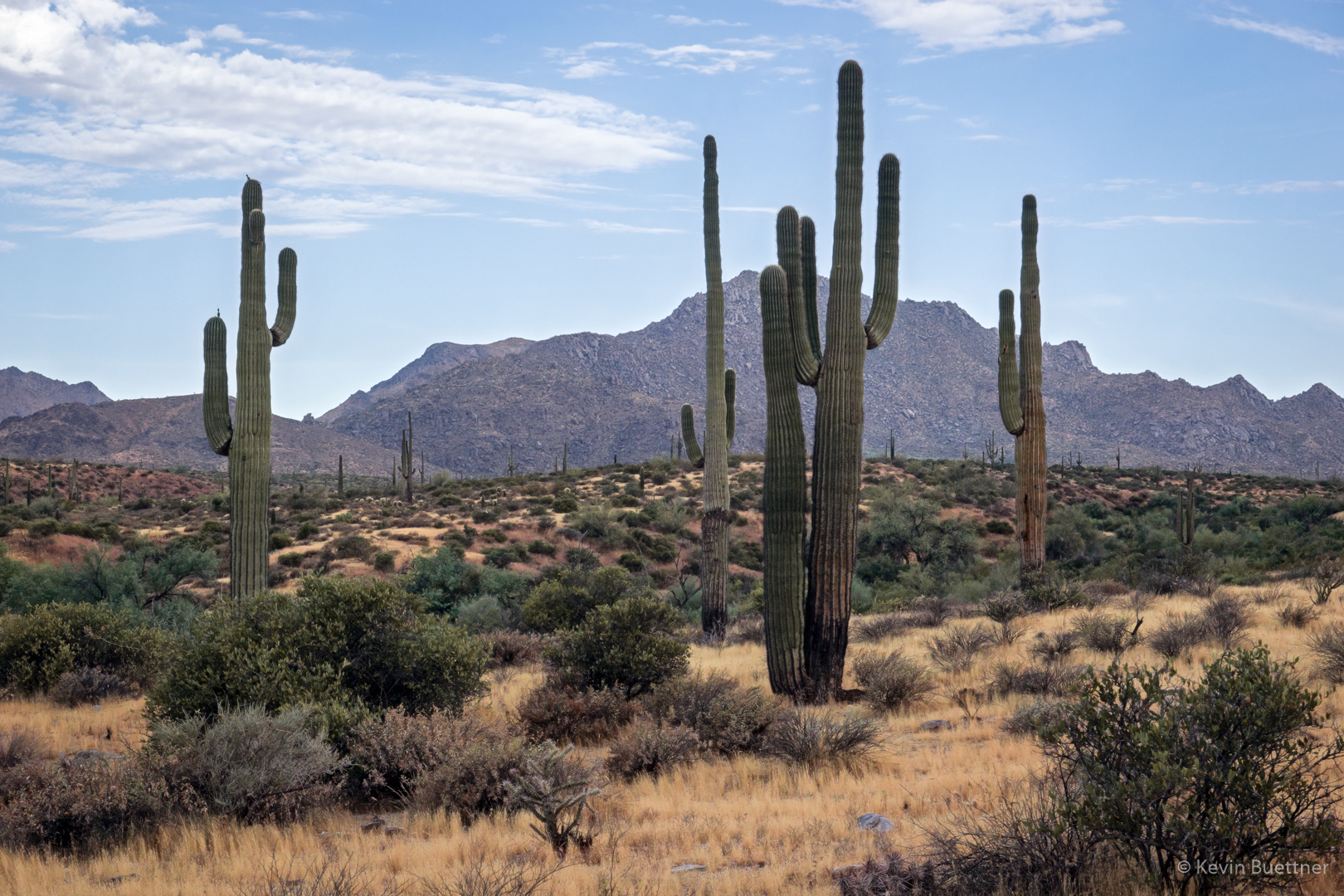 At one point, I heard a clap of thunder over my shoulder. When I turned to look, I saw that it was raining in the distance. 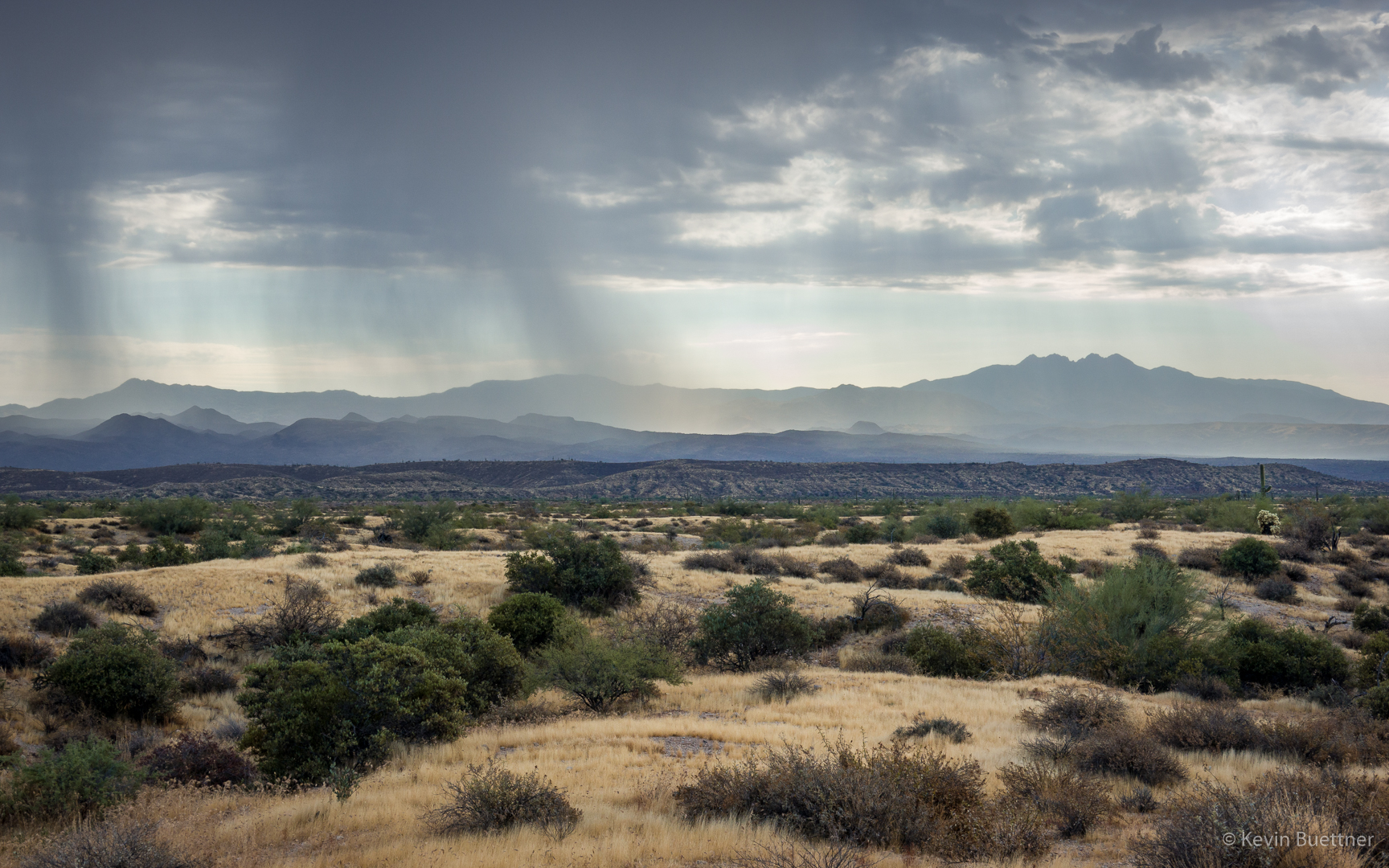 This is the “owl” arroyo, though I saw no owls in it on this particular day.  At this point, I’m past a difficult section with multiple partially fallen palo verde trees.  The trees are still mostly rooted, but I think that heavy snow from earlier in the year has turned them onto their sides somewhat, blocking the narrow and steep-sided wash. It was much more difficult to get through than it had been before that snowfall. 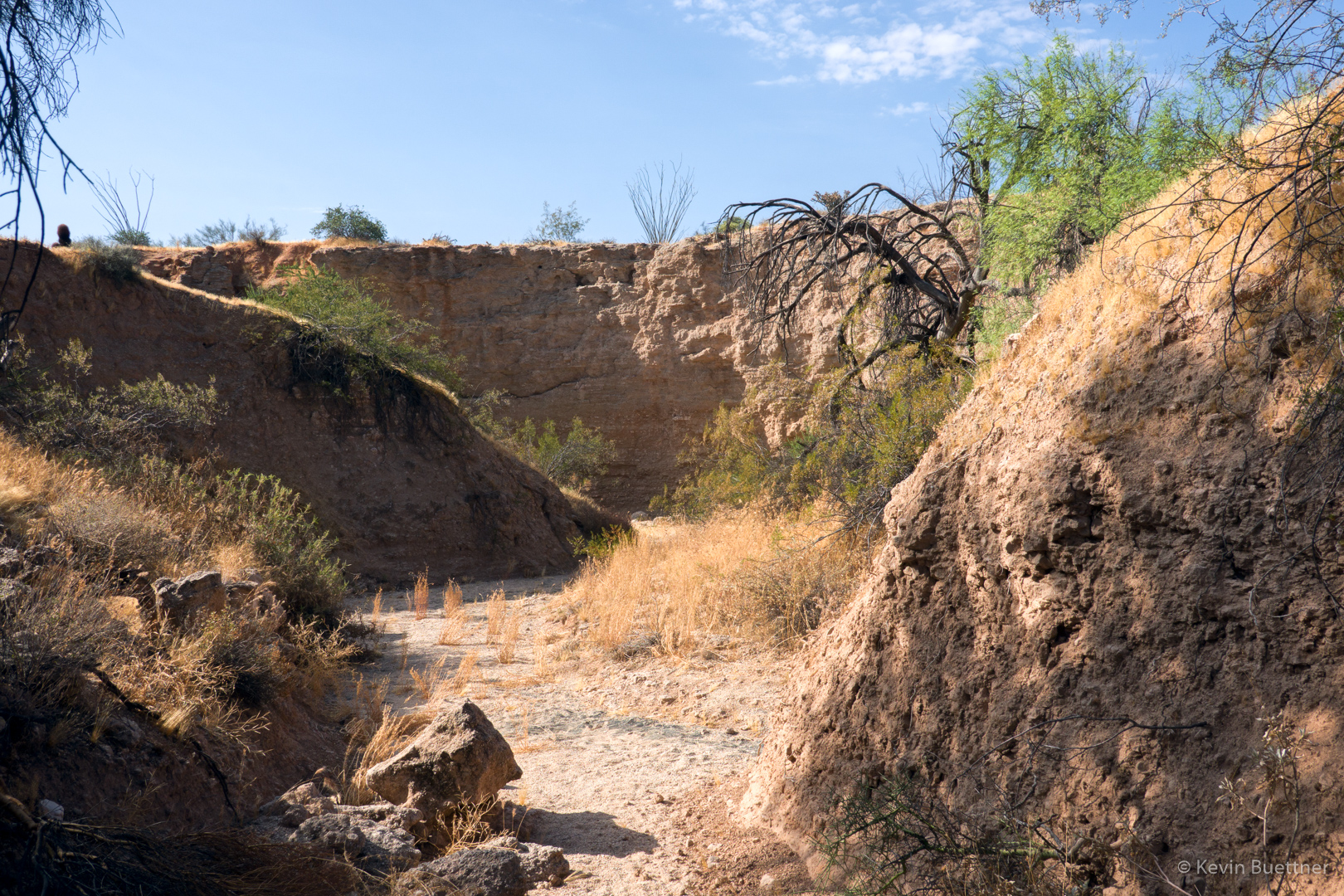 While I didn’t see any owls, I did startle a pack of javelina. One of the males came back, but didn’t get especially close. I got this photo of it as it was checking on one of the younger javelina which had been left behind. 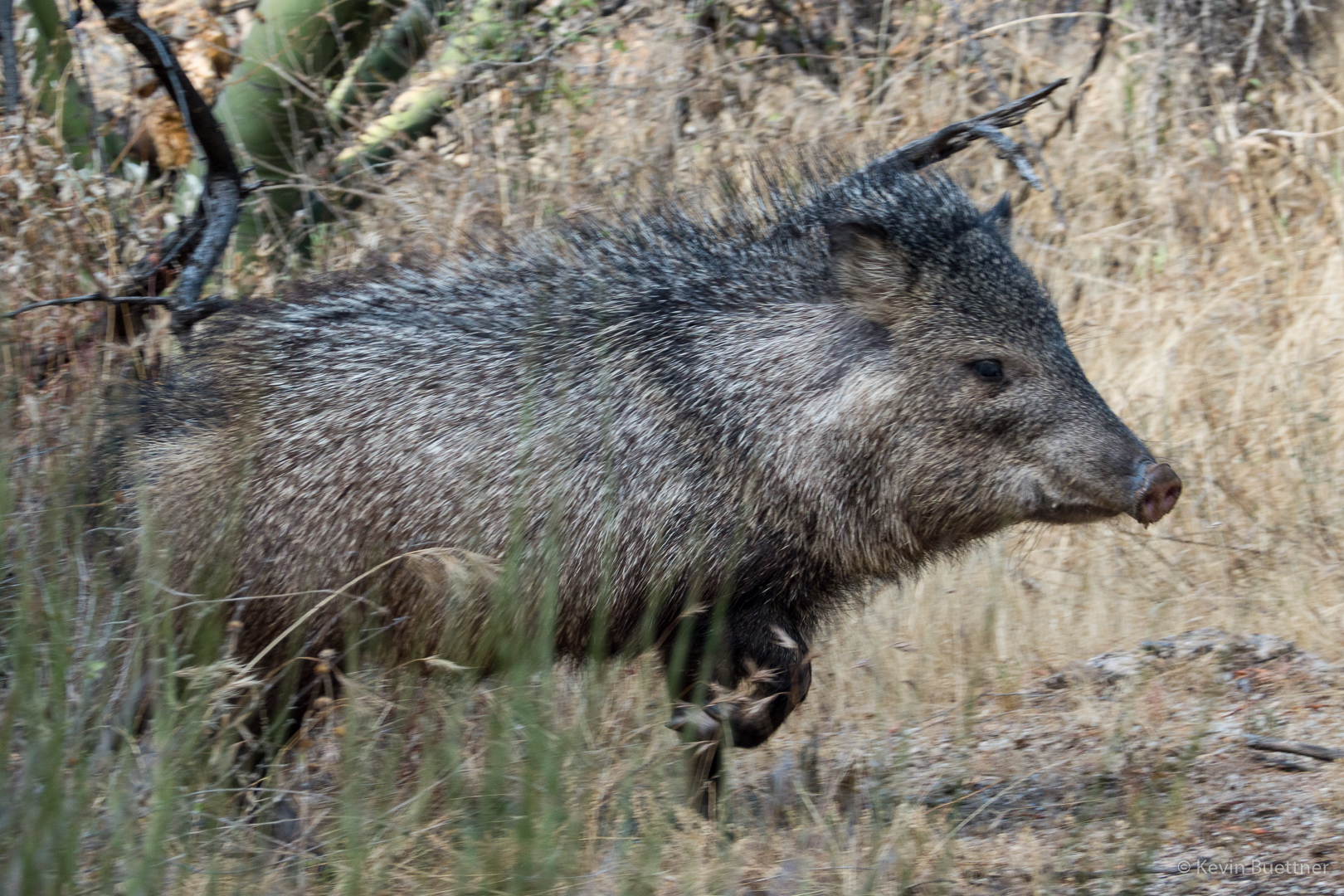 I think this might be the same Javelina, though I know I also got some shots of one of the younger ones running off too. 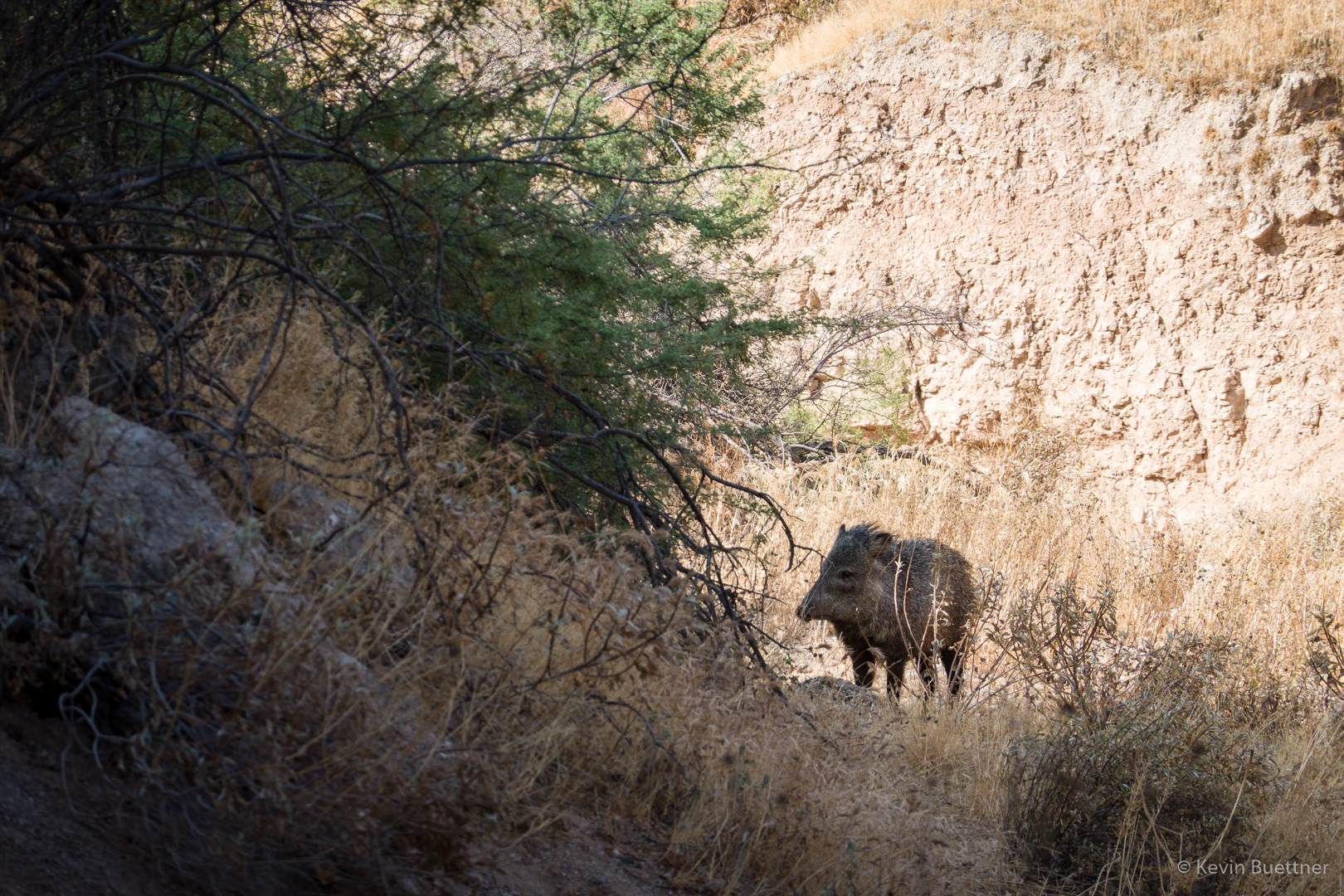 Another photo of that twisty arroyo. While you can’t see them in this photo, some of the Javelina are still ahead of me. Others, somehow ran up the banks of the wash, as did the bobcat much earlier. 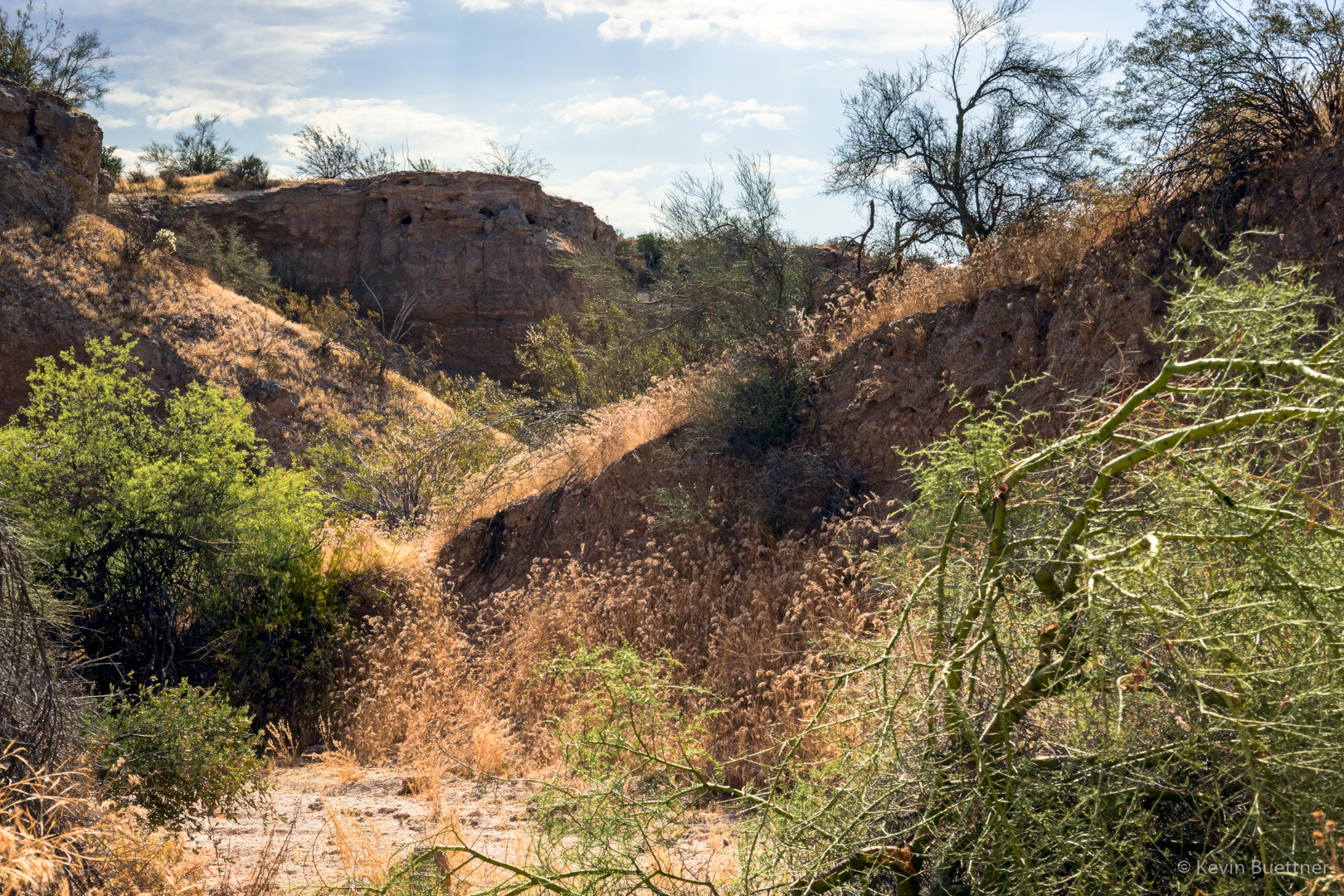