During our visit to Zion National Park, I hiked to the summit of Angel’s Landing while Marilyn and Marie hiked the Narrows. I found it to be challenging – it had a significant amount of elevation gain combined with some steep and exposed sections.  The steepest portions had chains that you could grab if you were freaked out by the exposure. I saw more than a few folks using them to pull themselves up or lower themselves down. This is not necessary – none of the moves are that (technically) difficult.

While I was going up one of the early (steep) sections of Angel’s Landing proper (the first two miles is the West Rim Trail – it’s steep, but it’s also wide and paved most of the way),  I saw a woman hugging one of the metal poles for dear life. She was clearly freaked out by the exposure.

This is a view from the West Rim Trail: 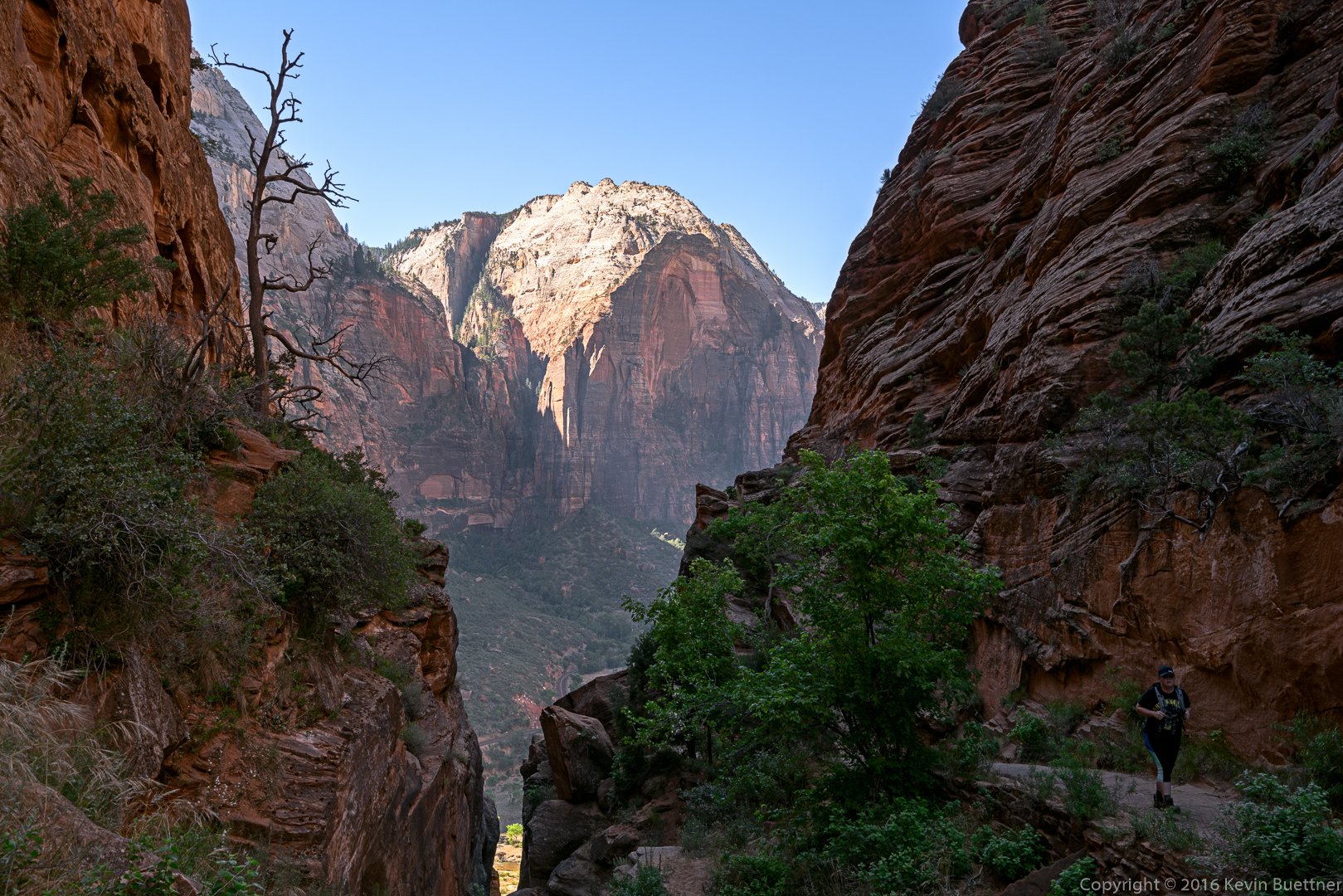 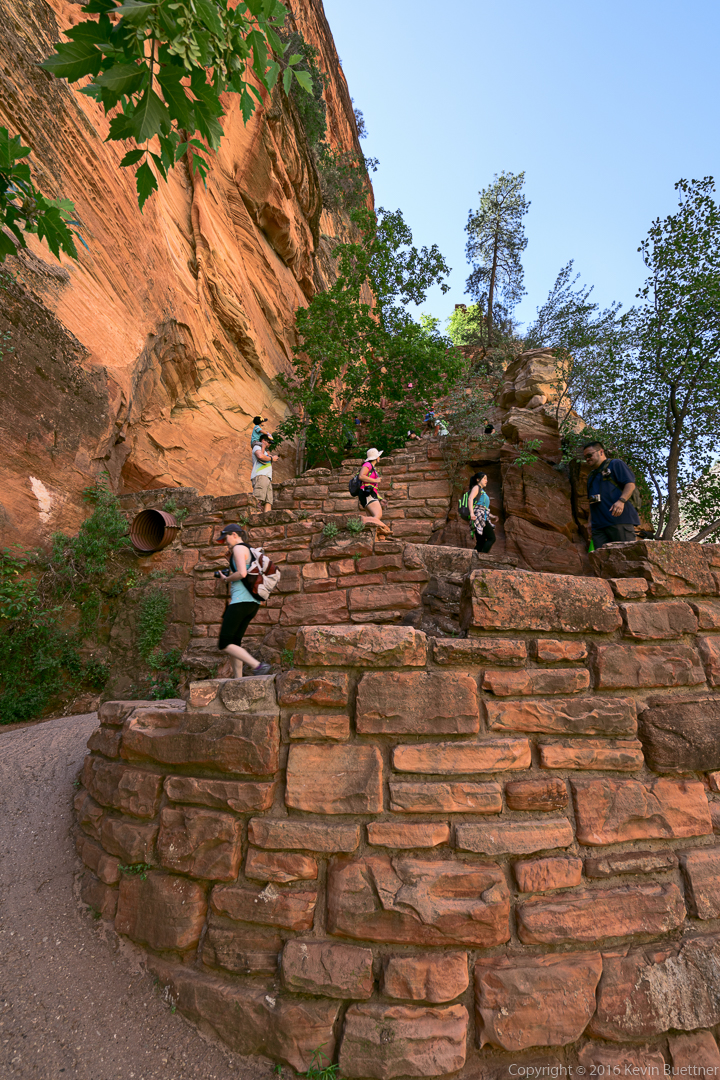 This is Angel’s Landing. Look closely – you’ll be able to see a stream of humanity going both up and down the path to (or from) the summit of this formation. 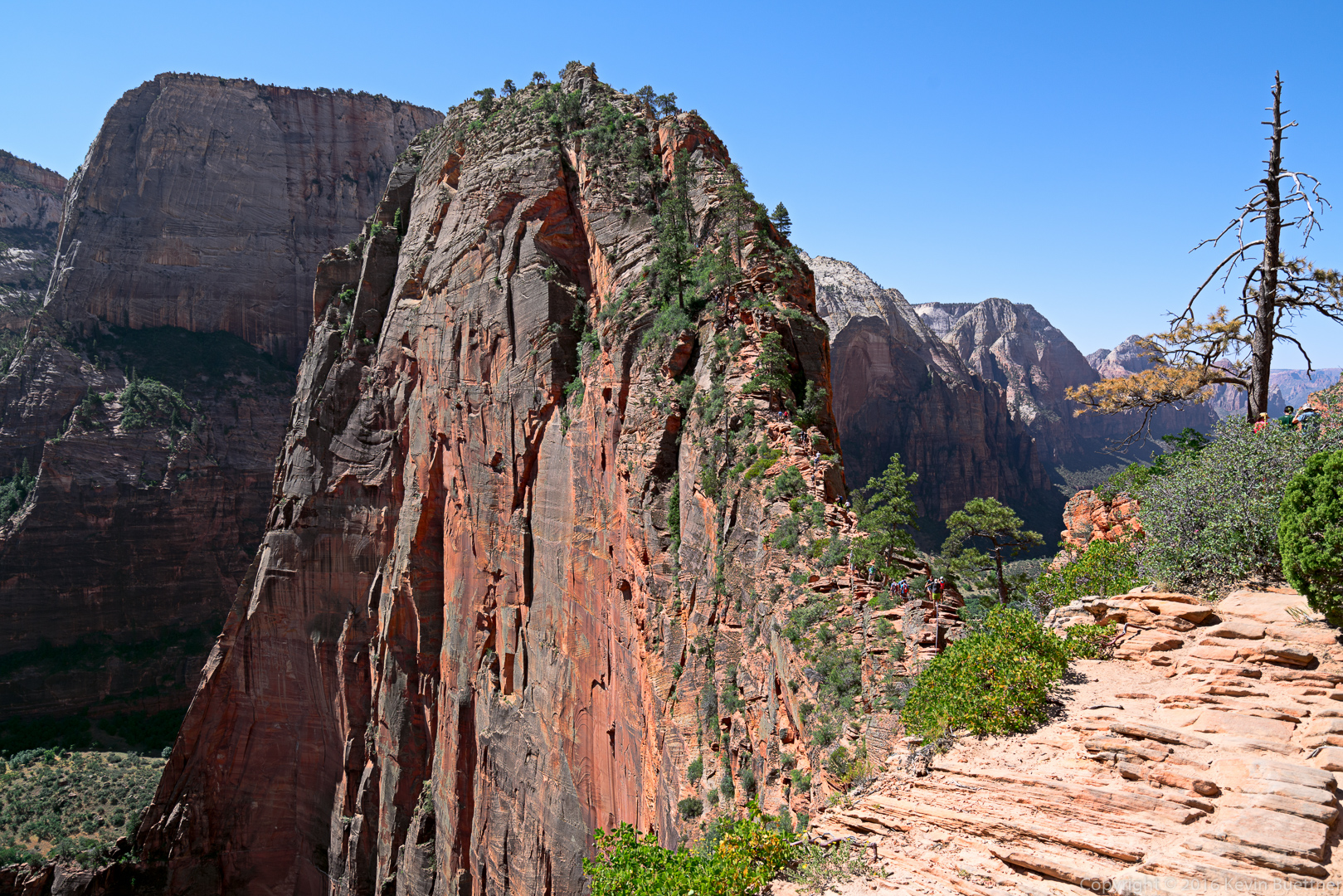 A hiker in this photo uses a chain to pull himself up the path. As mentioned earlier, the moves in this section are actually fairly easy.  The chain is not needed. 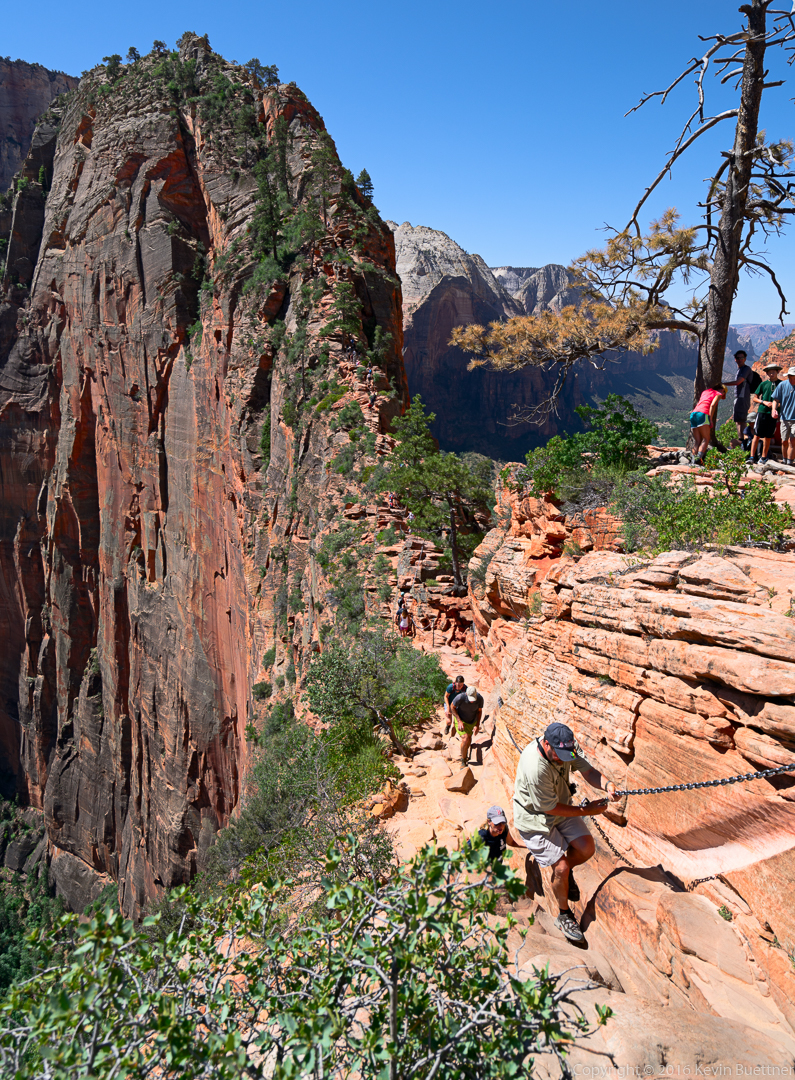 A view from high on Angel’s Landing. (I wasn’t at the summit yet when I took this shot.) 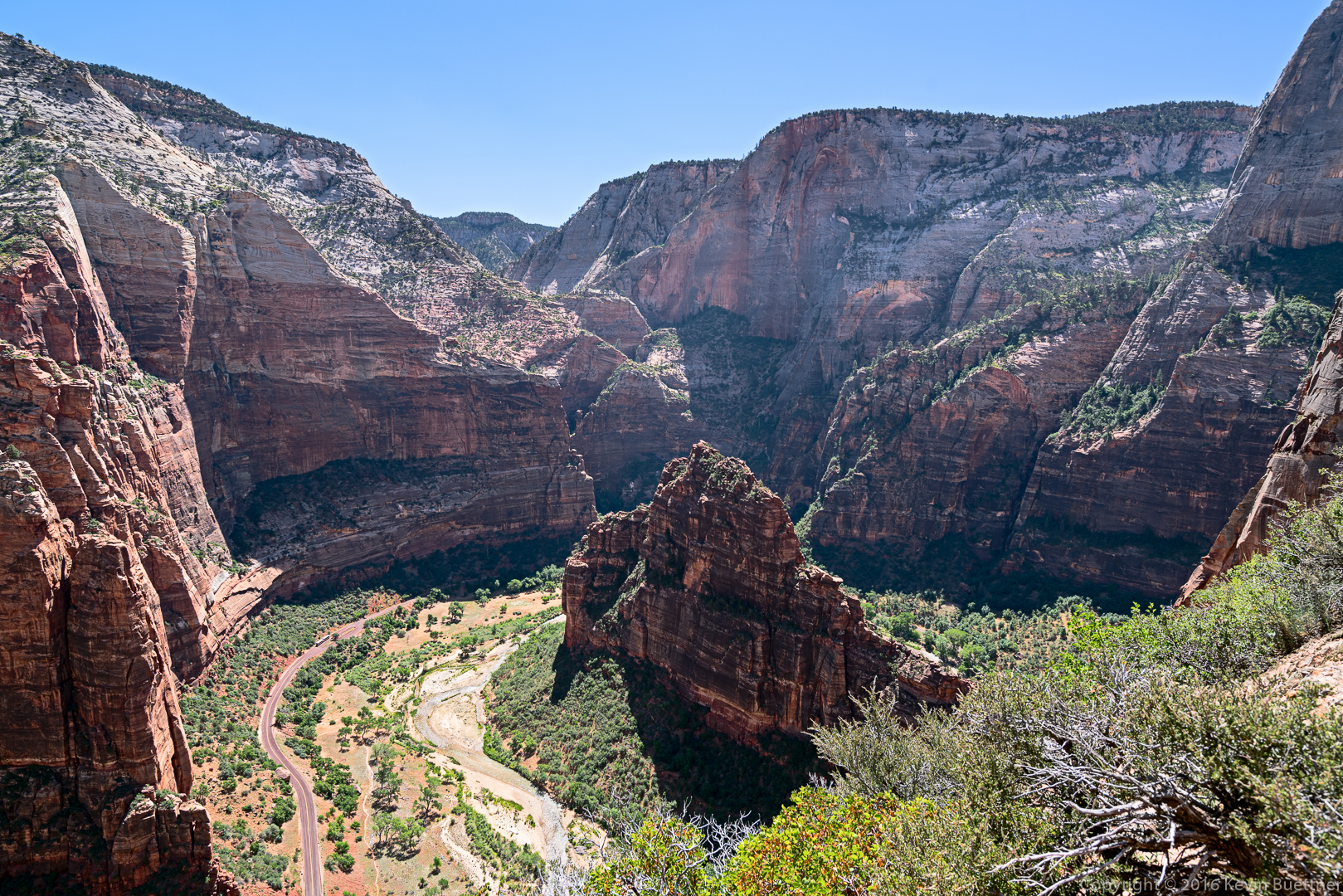 A woman hiking along one of the ledges leading to the summit: 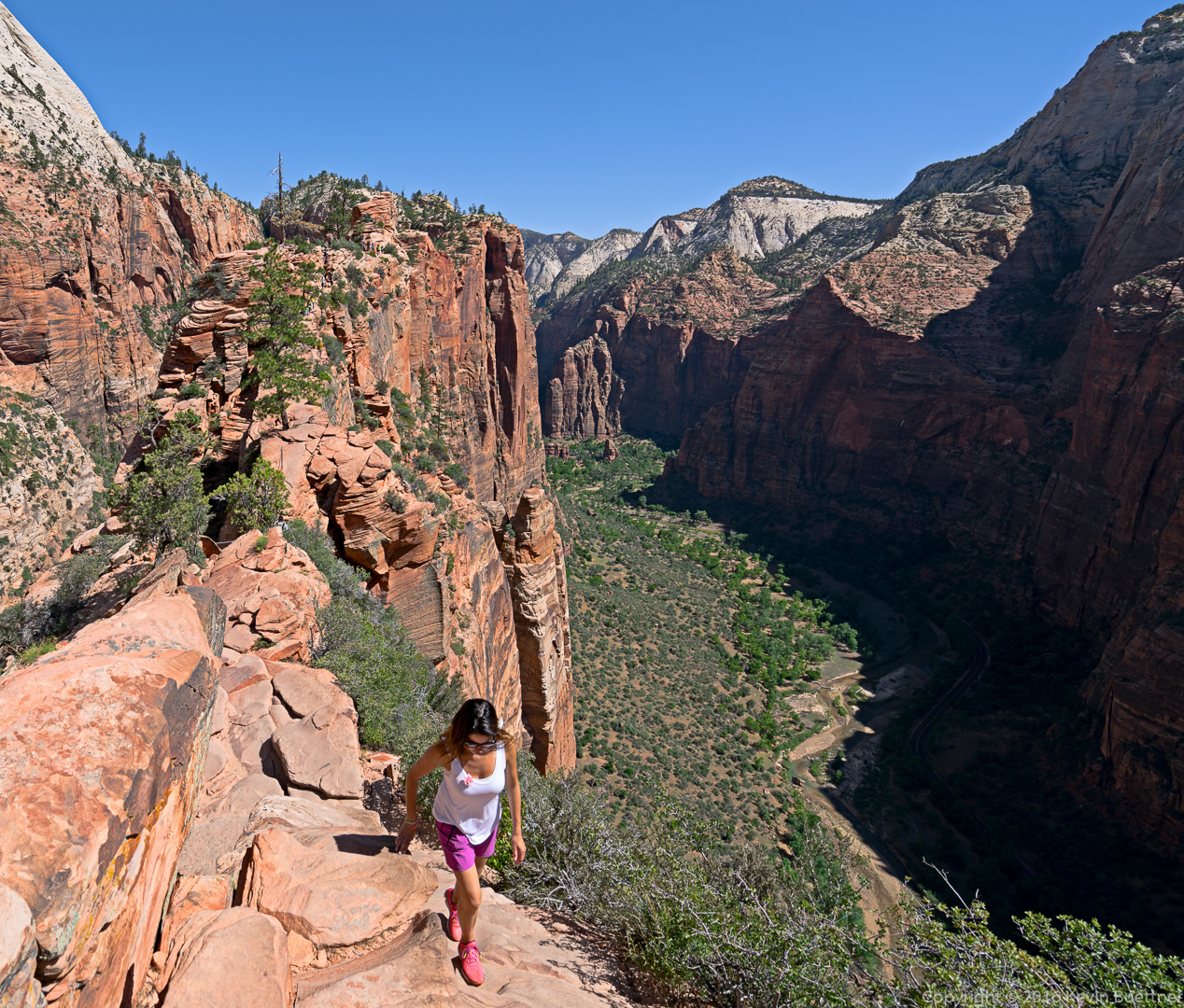 Another view from the Angel’s Landing trail: 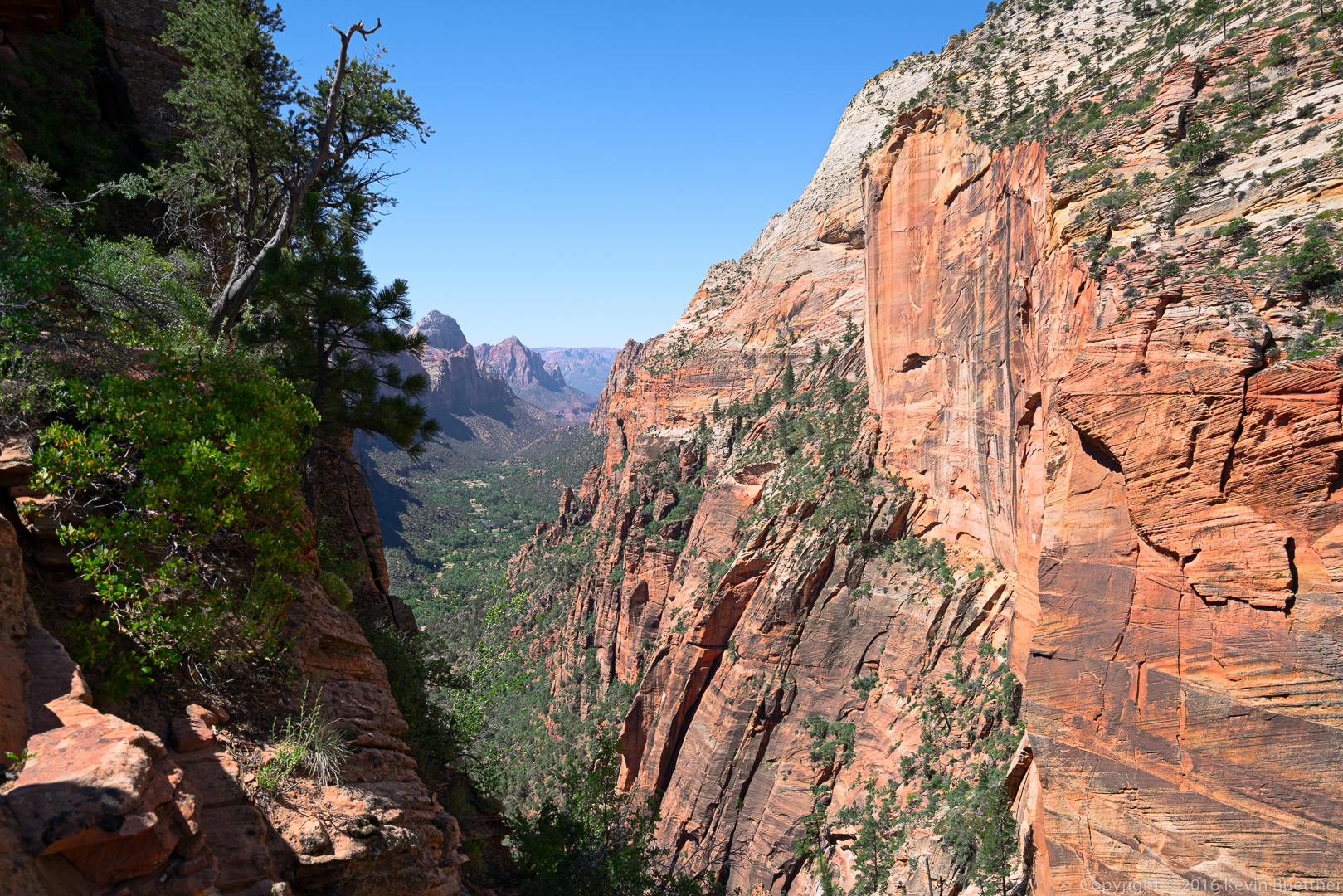 Looking down from the summit: 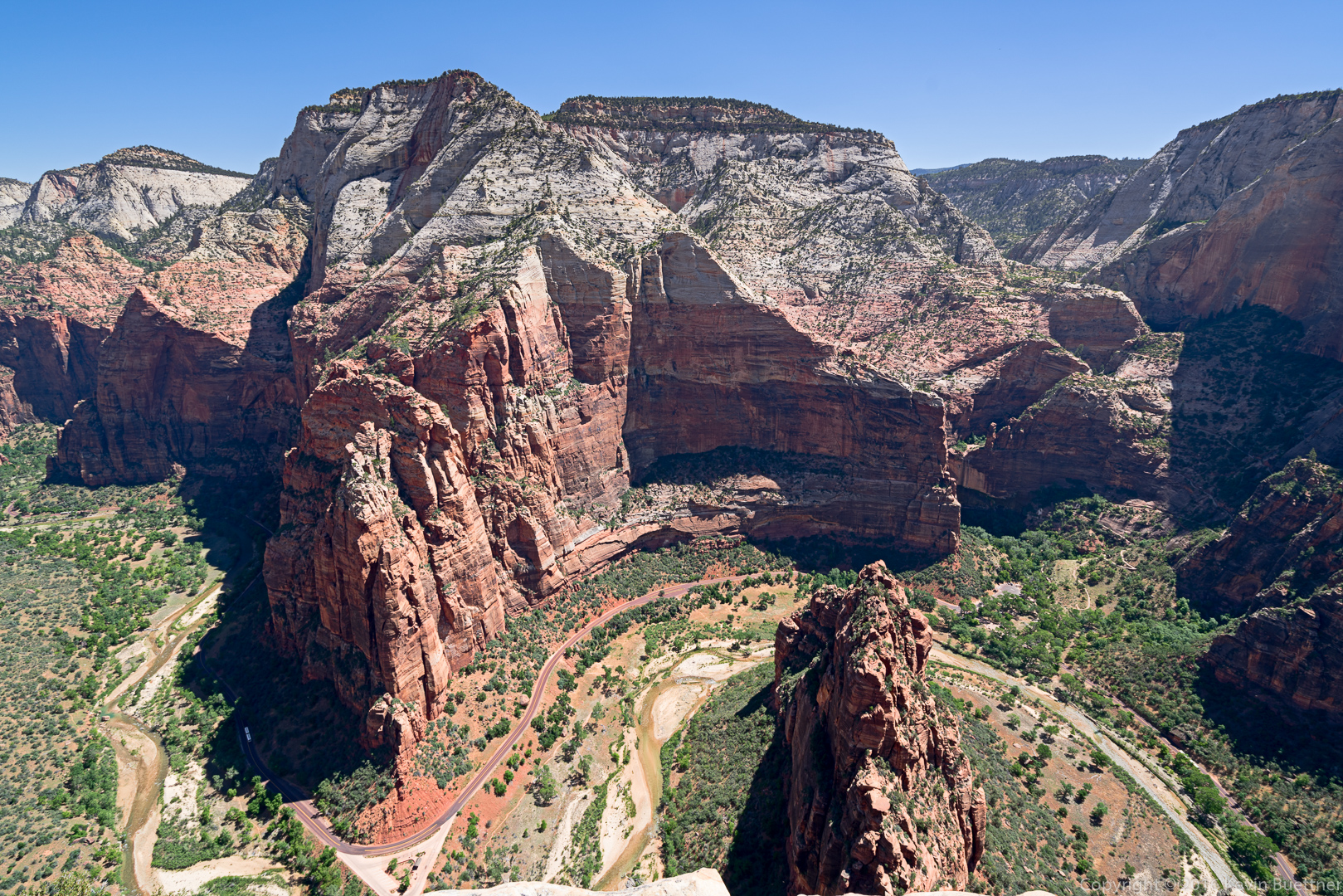 The squirrels and chipmunks at the top were aggressively friendly, probably from being fed by hikers resting at the top. 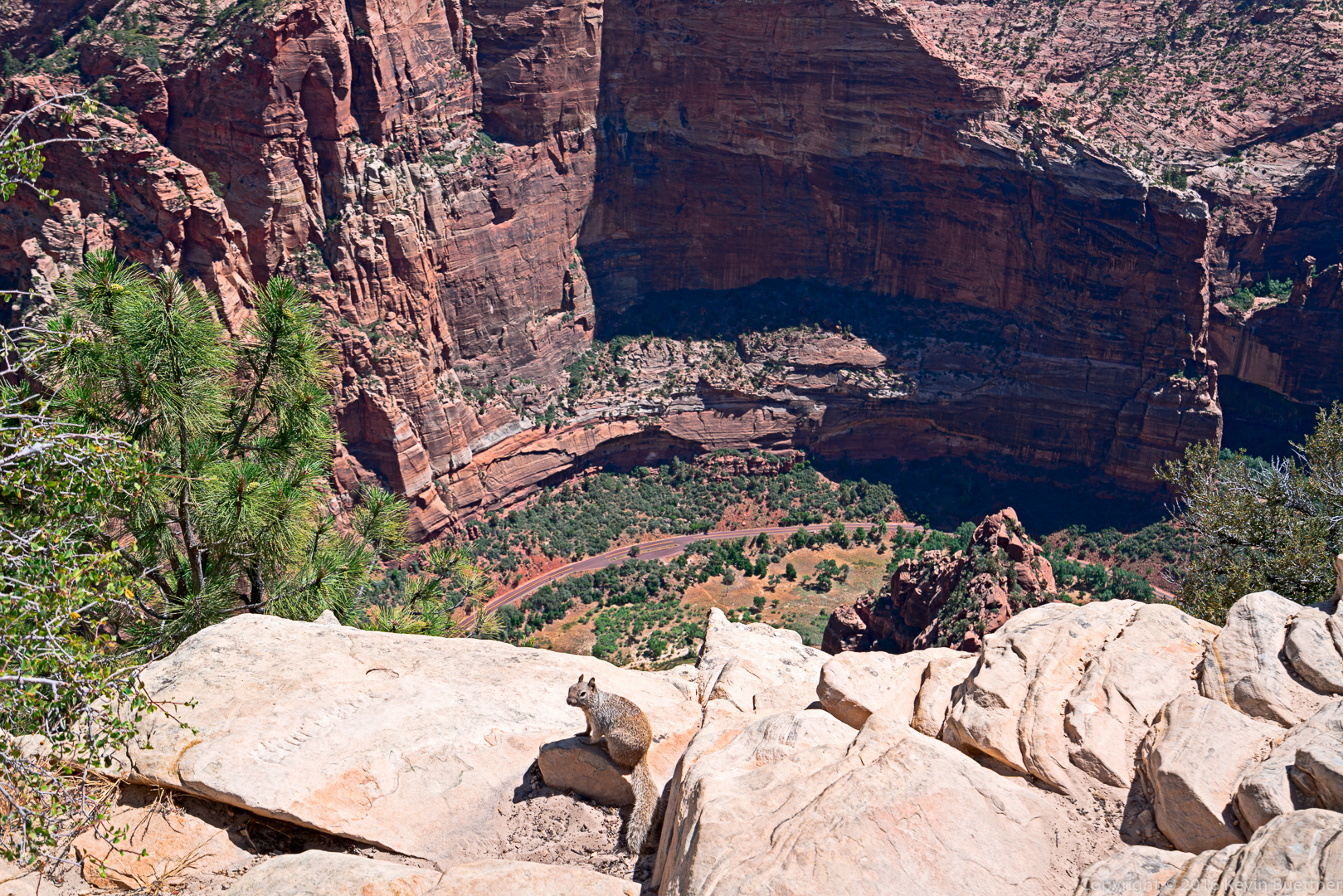 This woman was jogging up the path! 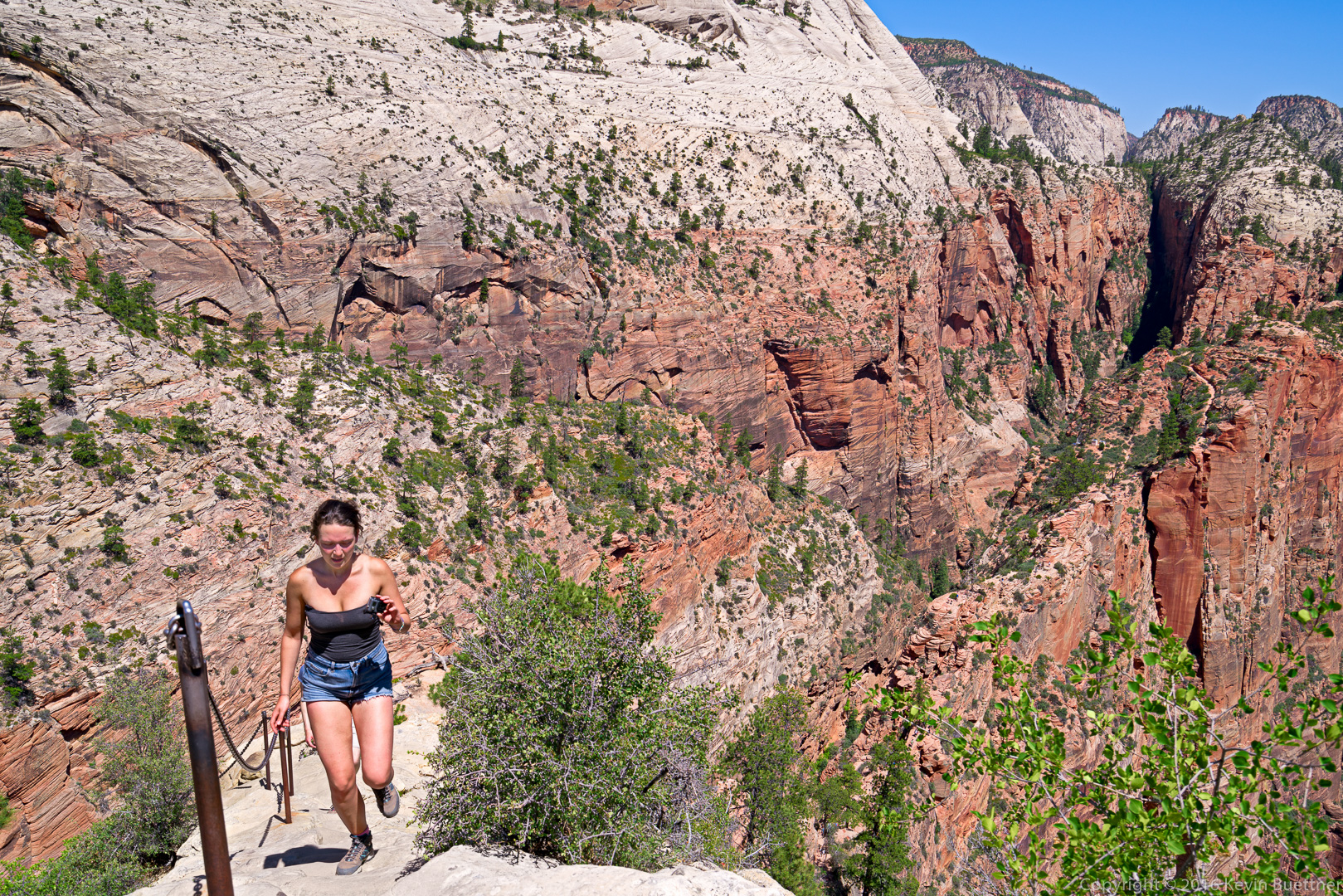 I took this photo on my way back. The woman in the white T-shirt is crossing a narrow, exposed section. After making it across, she asked, “This is the scariest section, right?” I told her it was in the top ten. 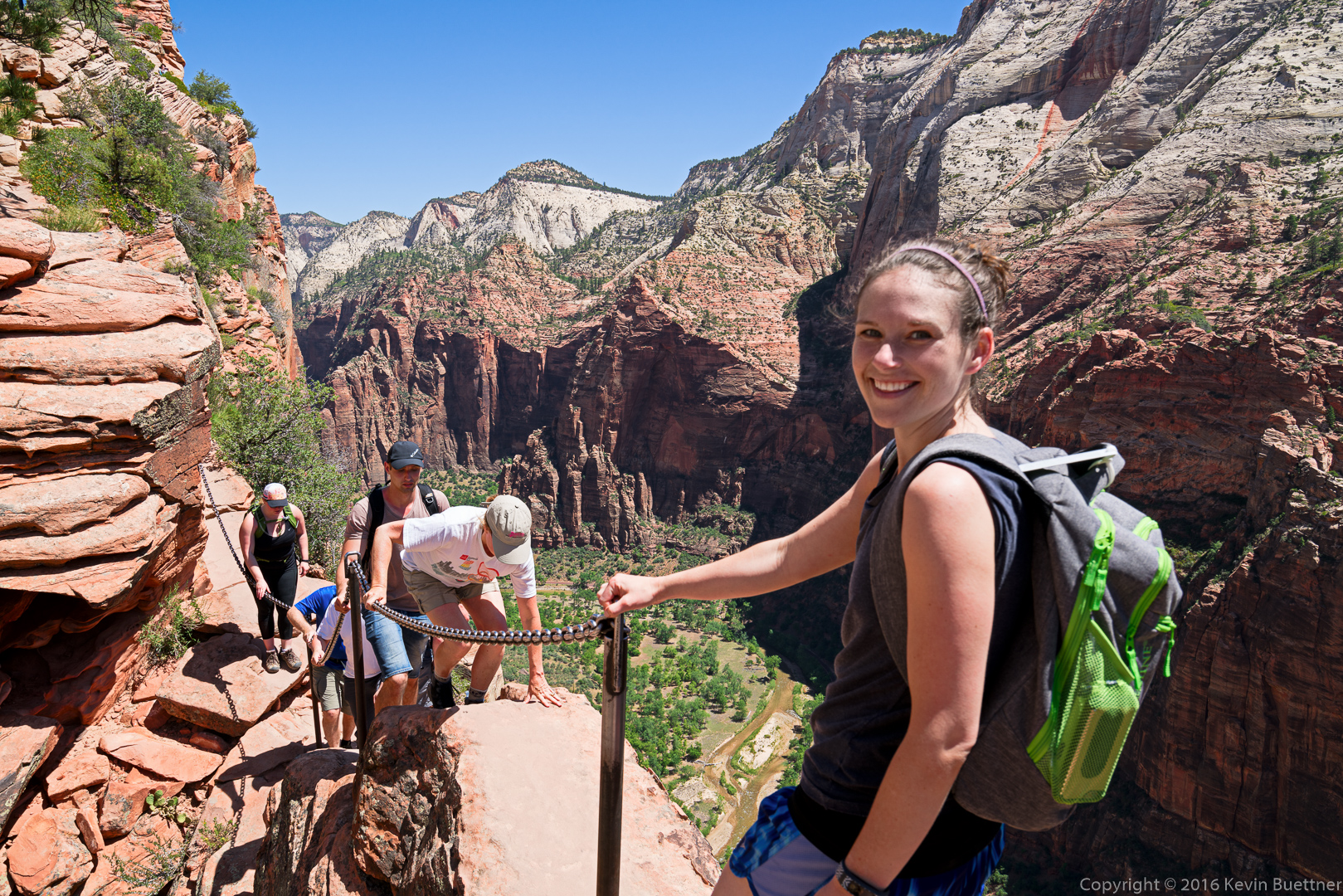