Friday’s hike was around Little Granite Mountain.  We had gone to the top in December, but this time, we hiked a mostly flat trail around the base of Little Granite Mountain.  Total elevation gain was only around 500 feet for a little over eight miles of hiking.   If we had started from a lot on the Preserve and not made any wrong turns, my guess is that the route would be around 6.5 miles.

Below is a map showing where we went.  We were hoping that the spur that we took at the eastern part of the loop would take us further east.  When it became clear that it was heading south,  probably leading to a parking area on Lone Mountain Road, we turned around and ended up going back (mostly) the way we came.

This is a photo of Little Granite Mountain from early in the hike: 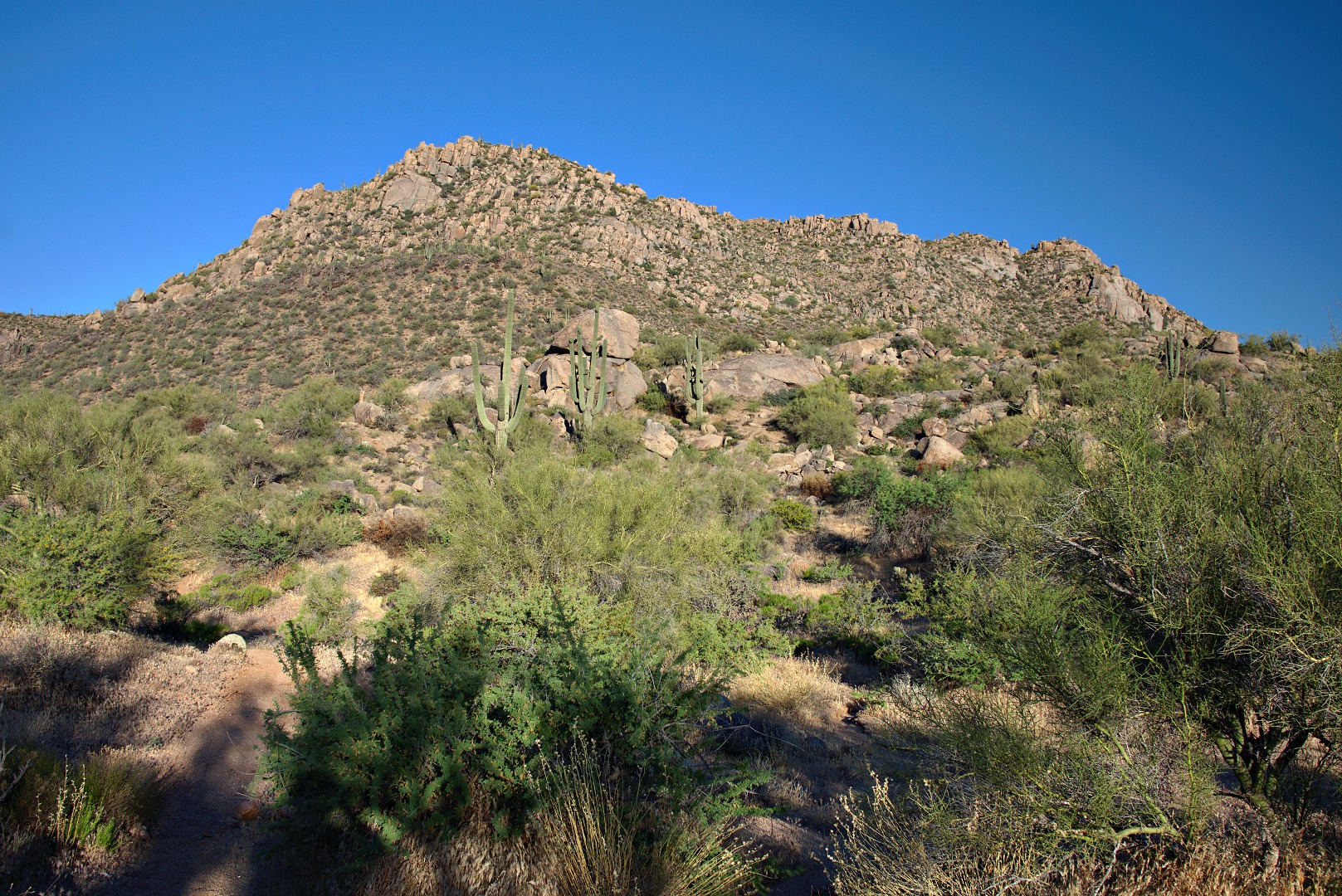 Linda and Doug watch as Bob tells Sarge to lie down.  Sarge did in fact lie down and got a treat for his efforts.  Bob says that Sarge is making good progress at dog obedience school.

We passed a shaded area with a rock outcropping at the top of a small hill.  It looked interesting because of the way the sun was striking the rocks at the top of the hill. 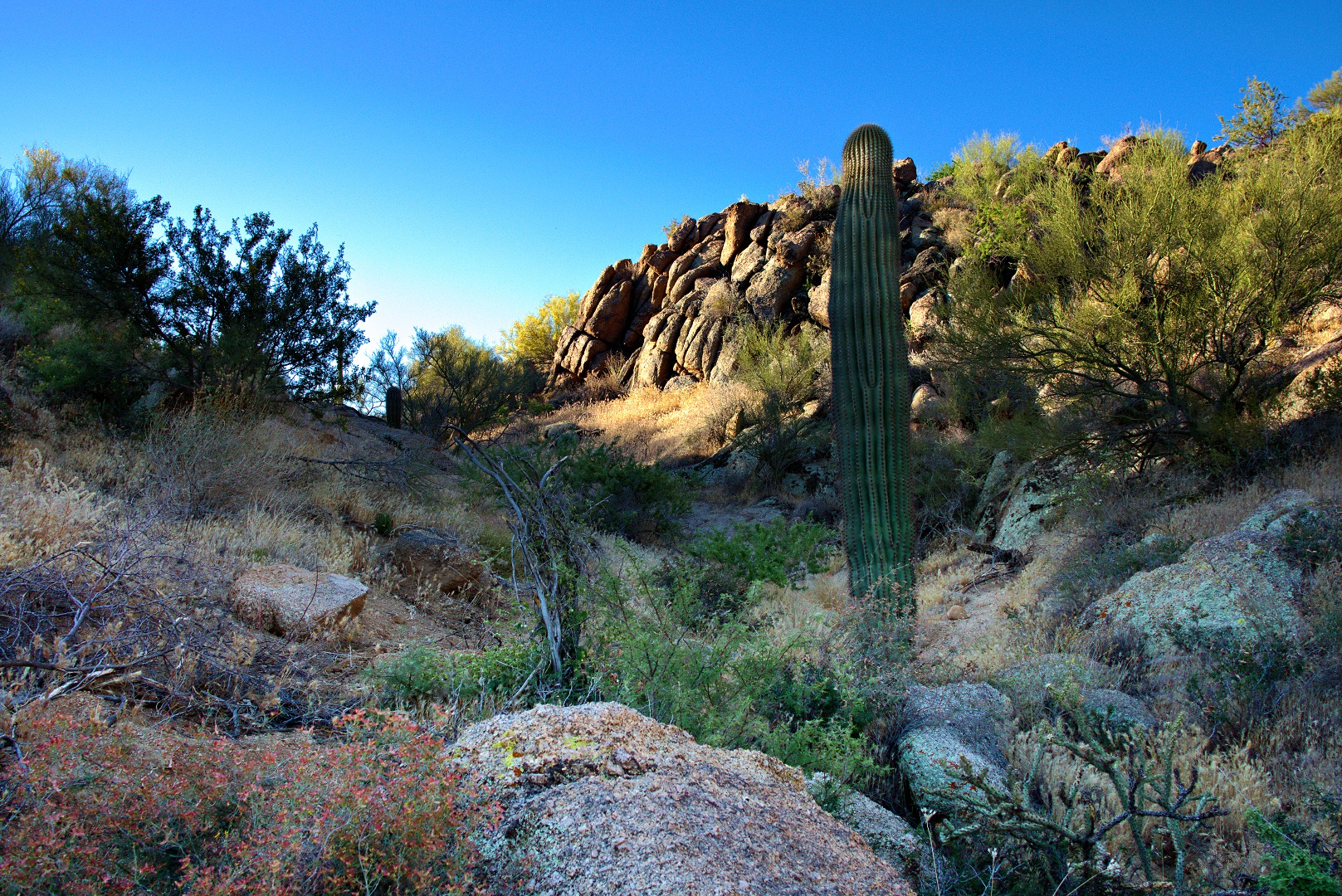 I got this photo a while later as Sarge was being given water.  I’ve noticed that the polarizing filter that I’m using is giving some nicely saturated results.

Around the time that Sarge was finishing up with his water, this cyclist rode by.  She is wearing a McDowell Sonoran Conservancy Steward’s jersey.  I’ve seen a number of stewards hiking while riding my bike.  This is the first one I’ve seen on a bike. 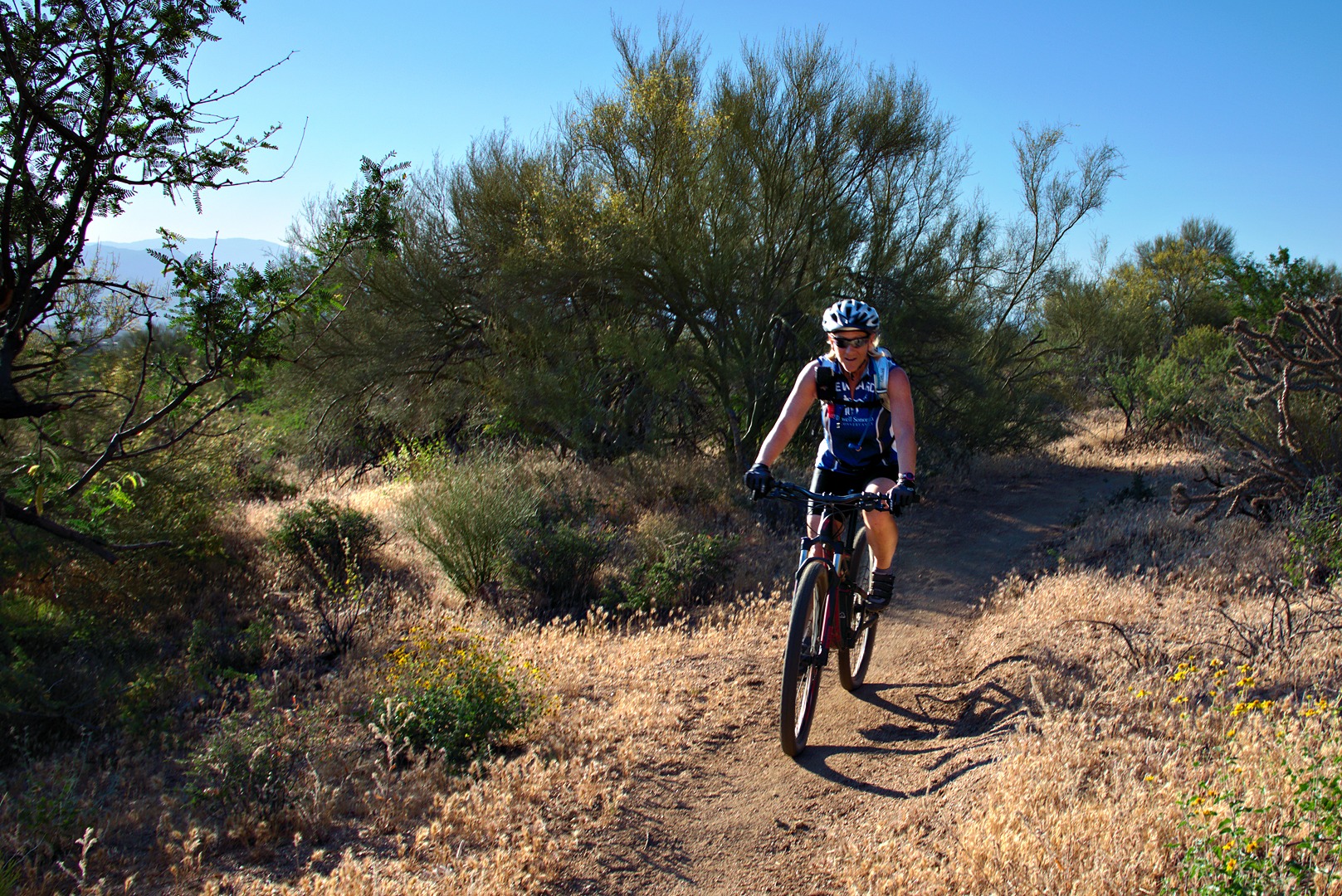 We saw this large saguaro shortly before entering the early morning shade from the mountain. 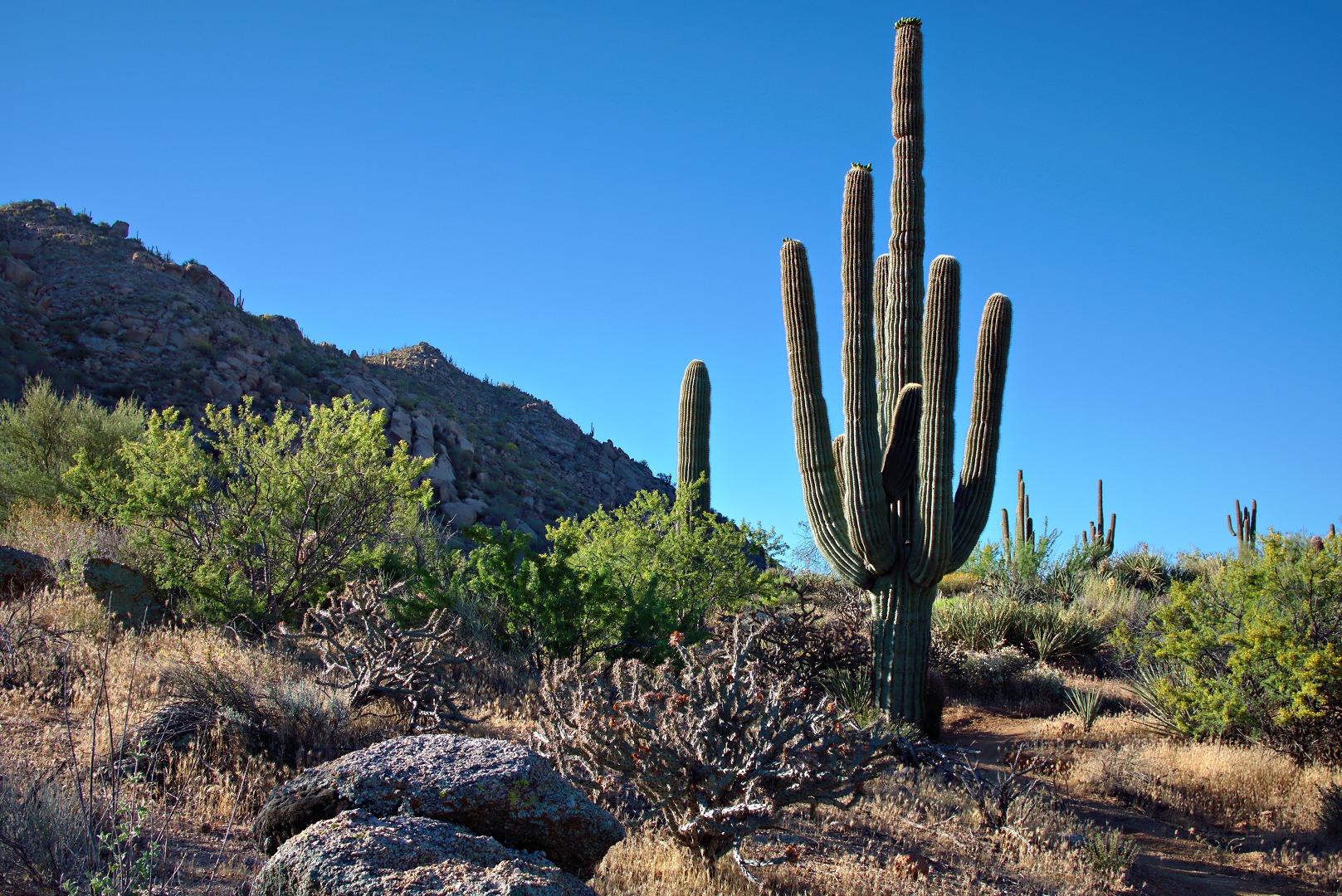 I thought it was interesting to see a granite fin as we made our way around the mountain. 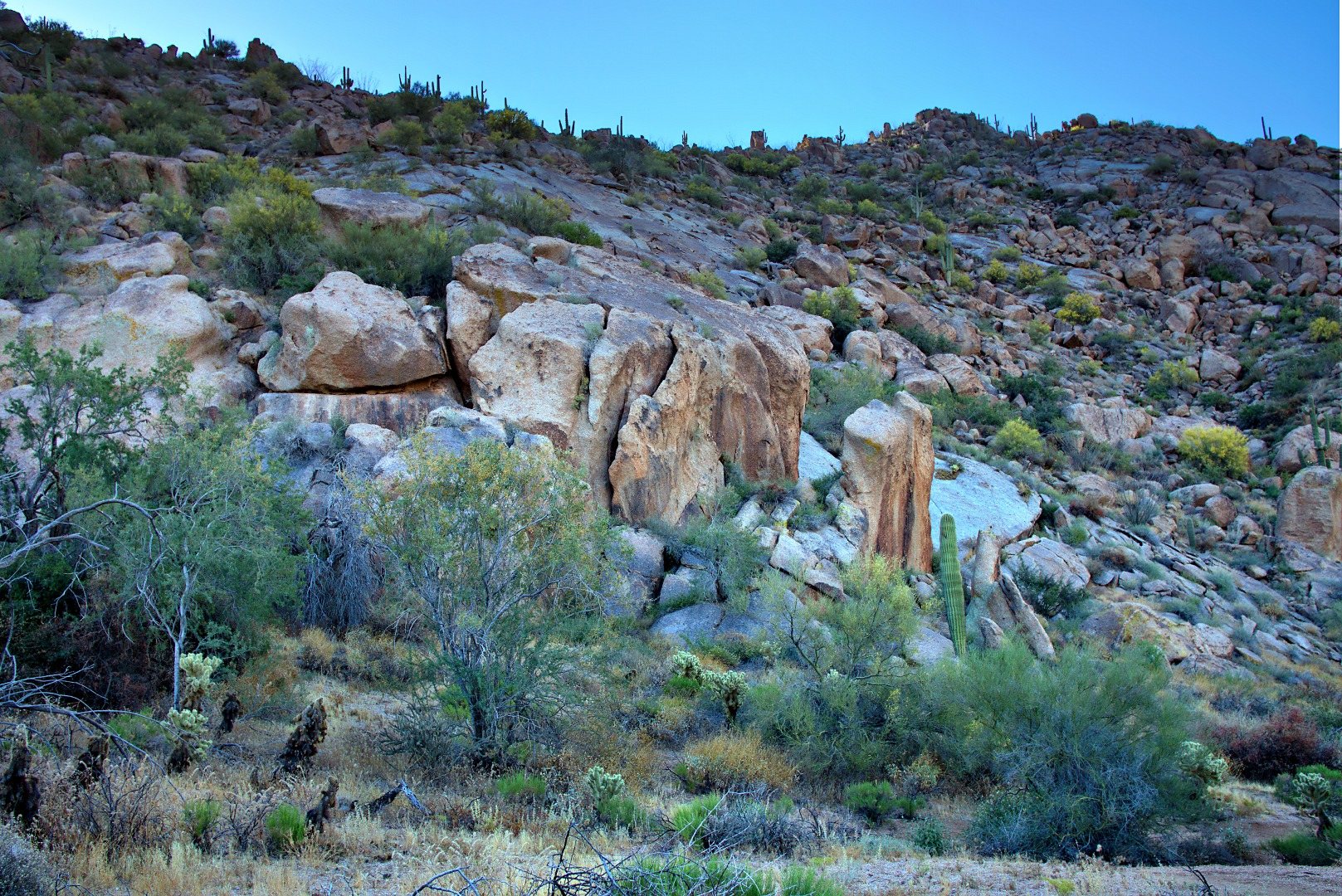 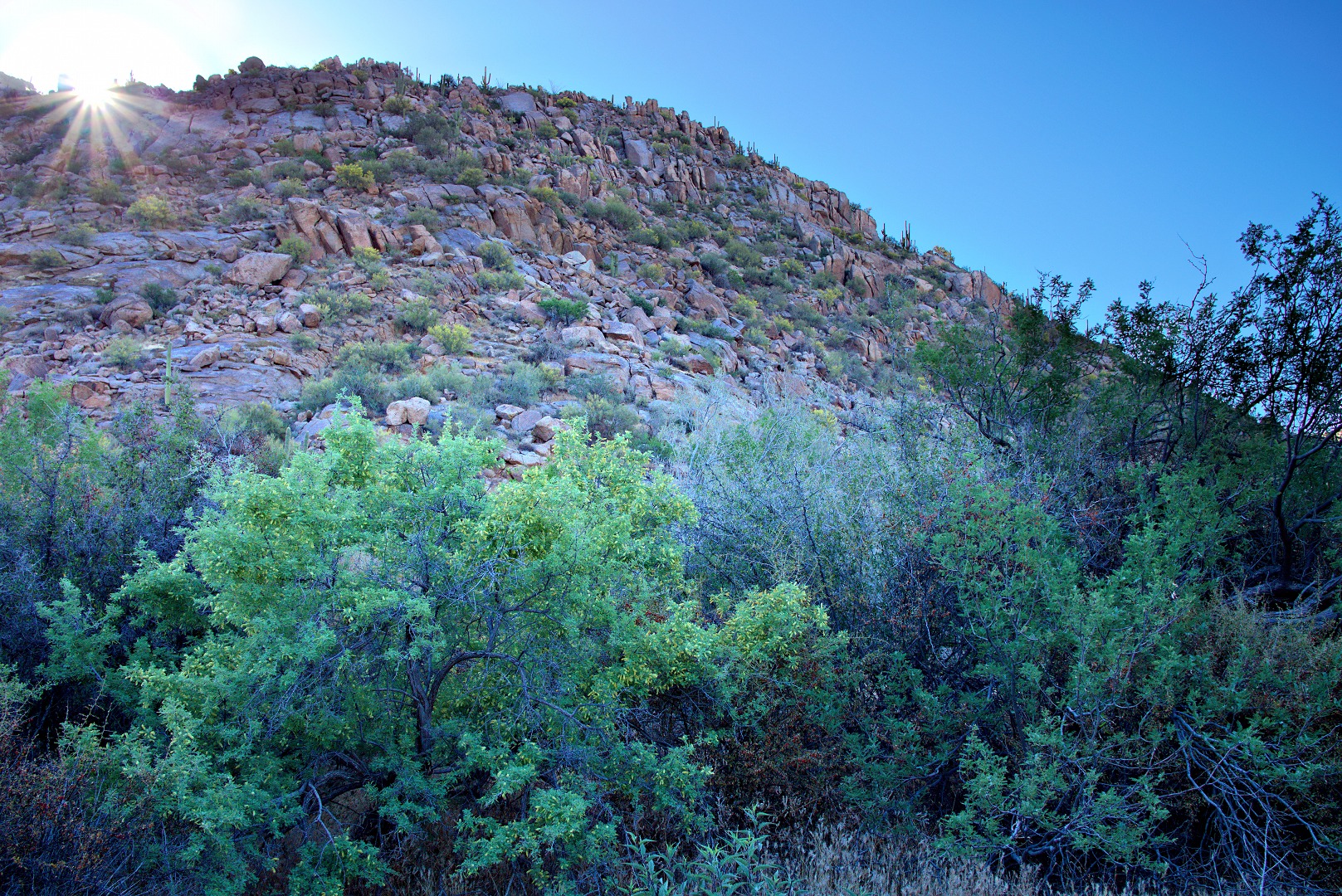 Linda took this photo of me taking my own photo as we exited the shade: 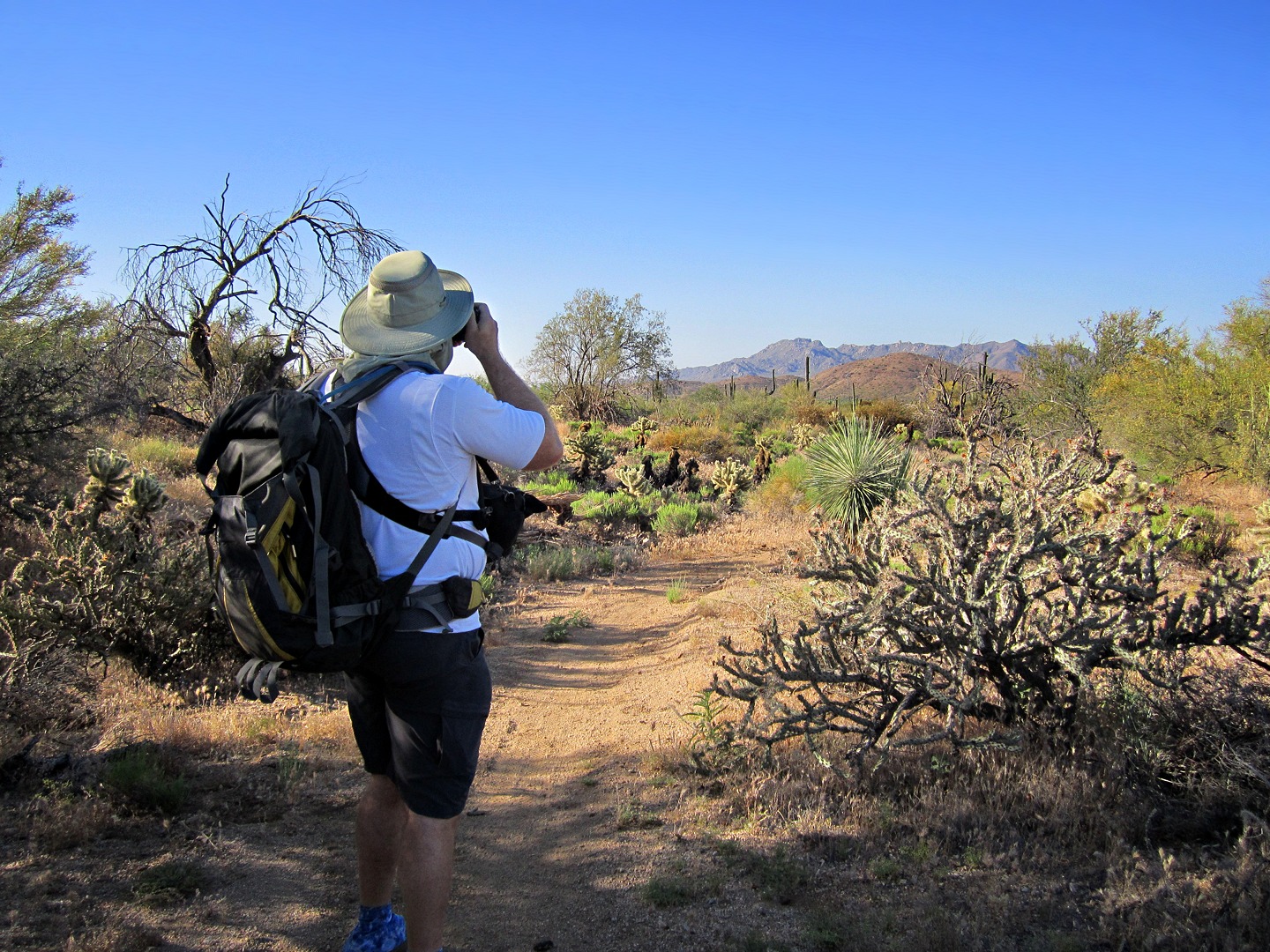 Linda also took this photo of me, Bob, Sarge, and Doug. 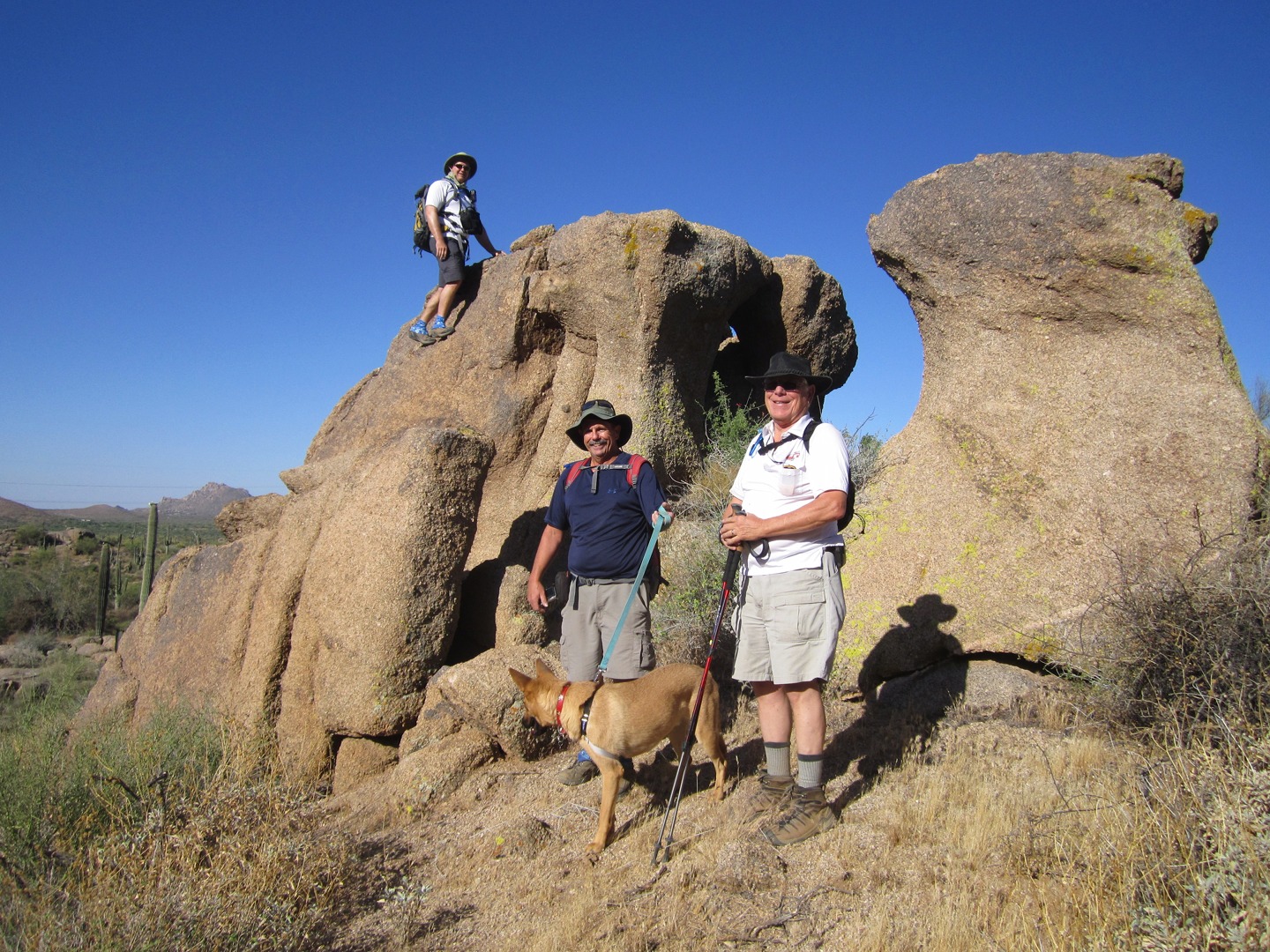 I took this photo of a nearby rock outcropping while perched on that rock: 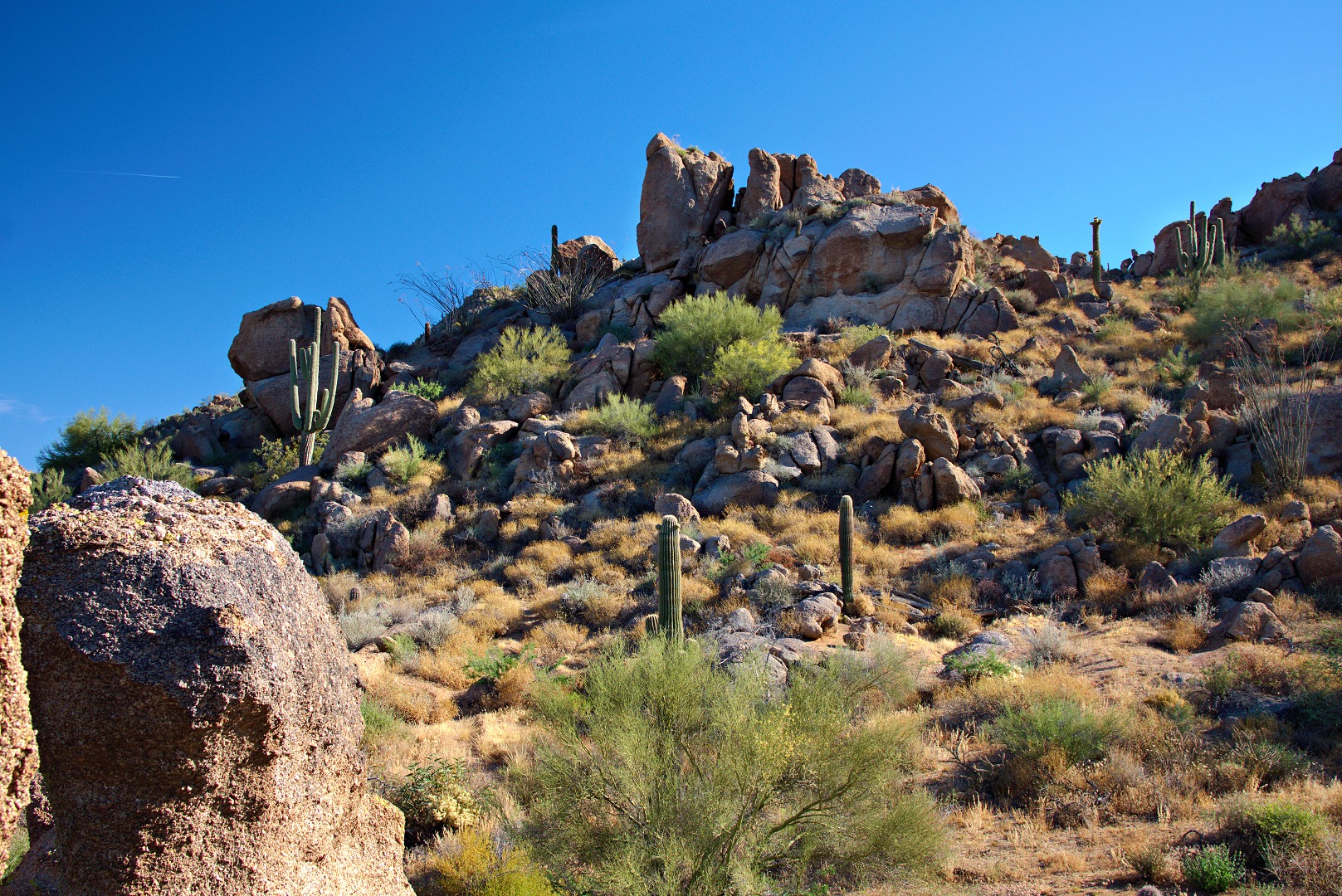 The upper wall in the photo below is Lost Bandanna Wall. The smaller wall down and to the left is known as the Cone.  Marilyn, Joe, and I have done climbs on both of these walls.  The prominent crack near the left edge of the wall is Spectrum.  It’s rated 5.7, but it’s the hardest 5.7 I’ve ever done.  There’s an easy climb (5.4) on the Cone called Three Dopes on a Rope. 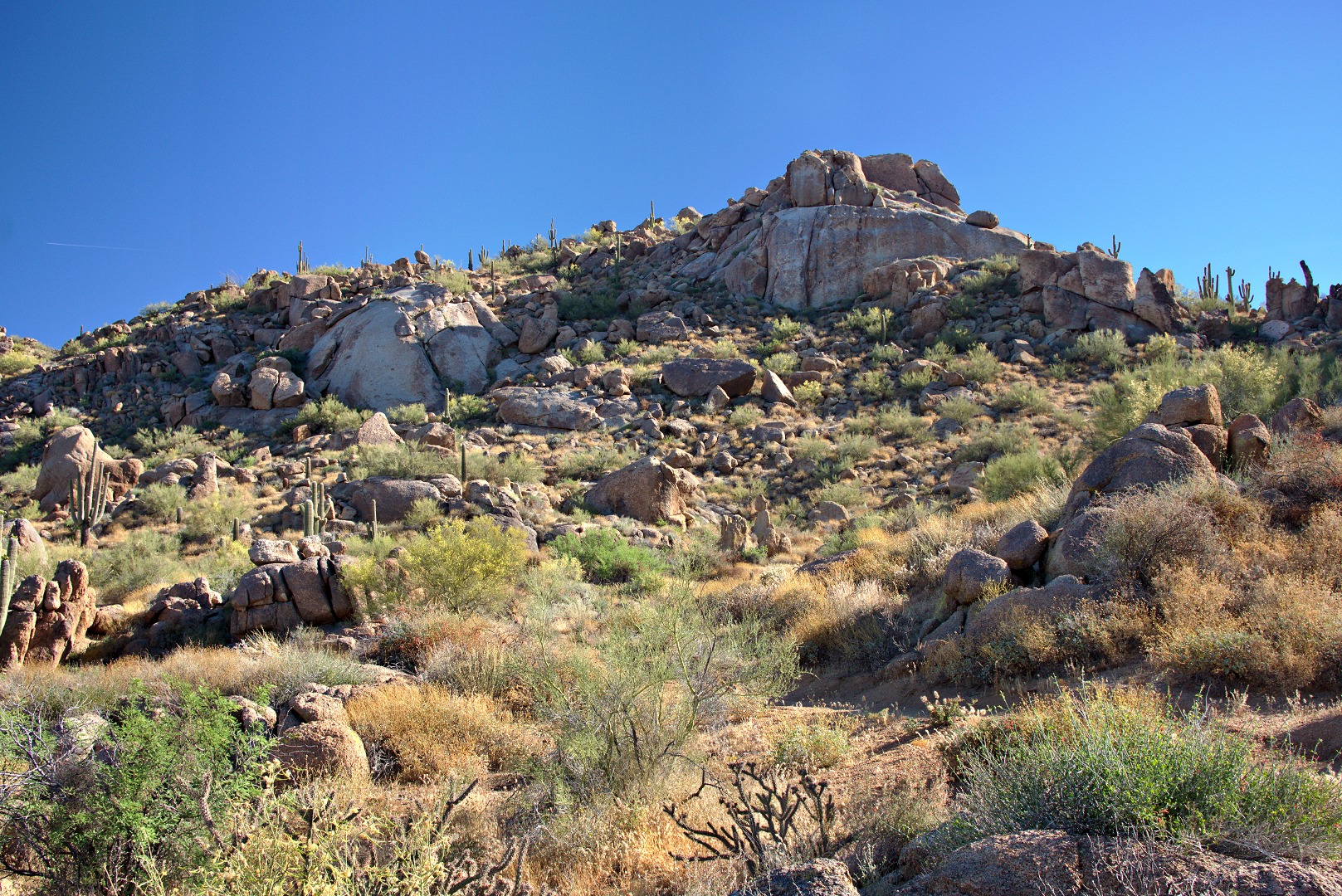 This hill is near the Lost Bandanna-Cone area.  The small pinnacle at the top right is known as the Pasta Pinnacle.  There’s a 5.8 on it called Pasta Man Unchained.  Craig Thornley and I looked at it once or twice, but I don’t think we ever climbed it.  One of my early leads was Dueling Hammers (5.6) located on a wall on the other side of this hill. 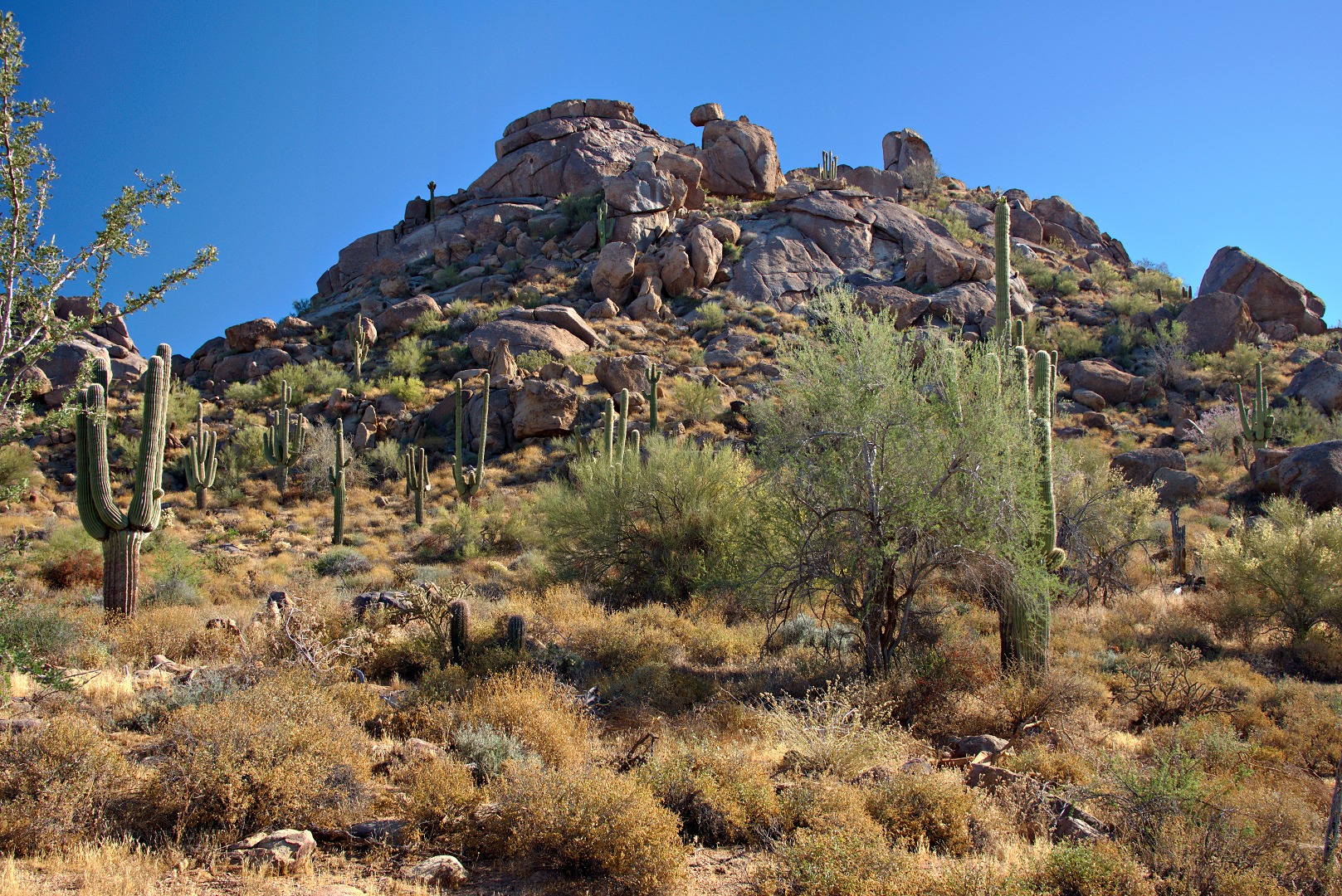 As we continued around, we came upon this really big saguaro.  Doug encouraged me to hurry up and take this photo because the bugs were bad whenever we stopped. 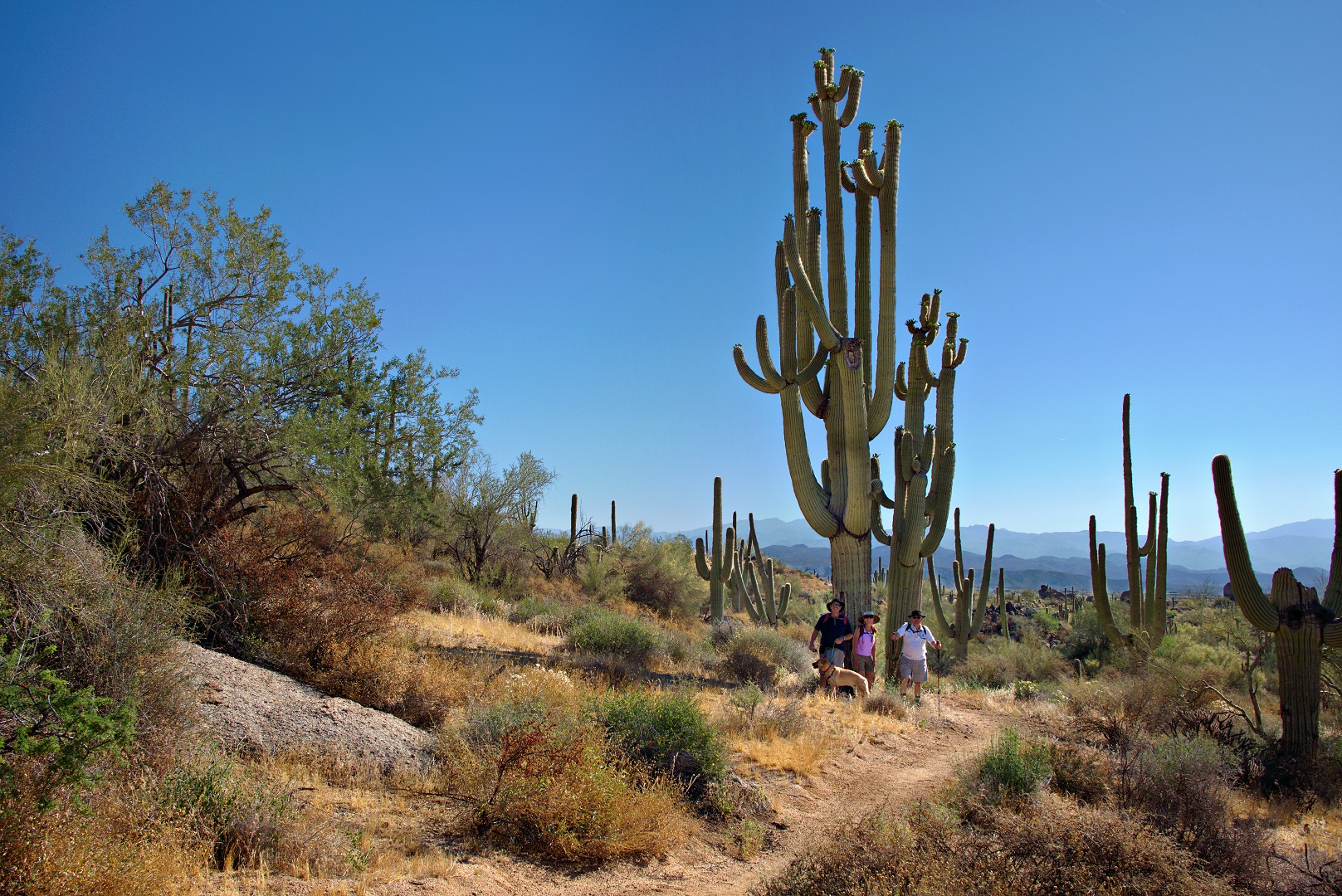 A view of the trail and vegetation as we continued our way around the mountain:

Flowers on a saguaro with a drooping arm: 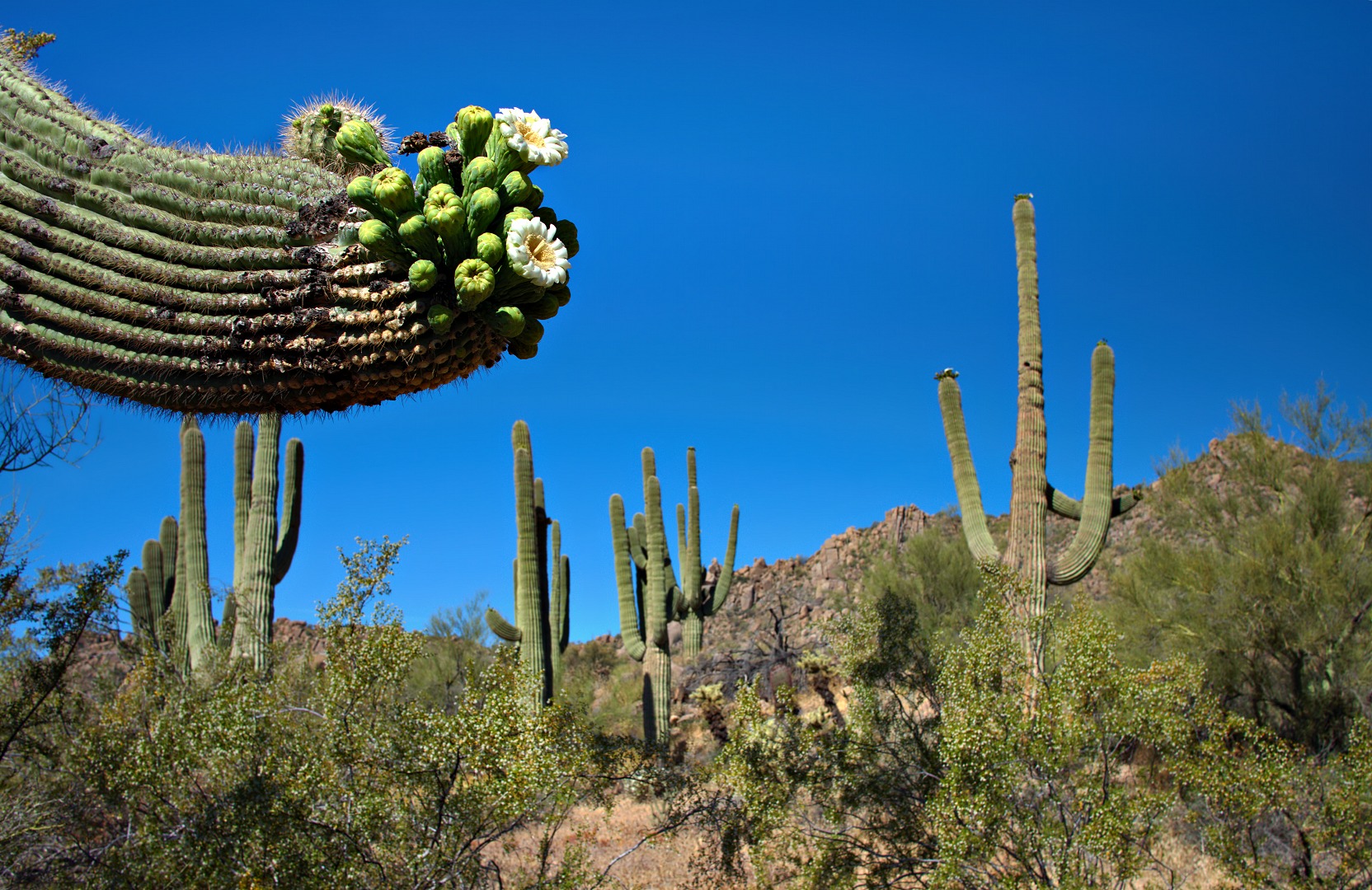 The trail was scenic in more than a few places… 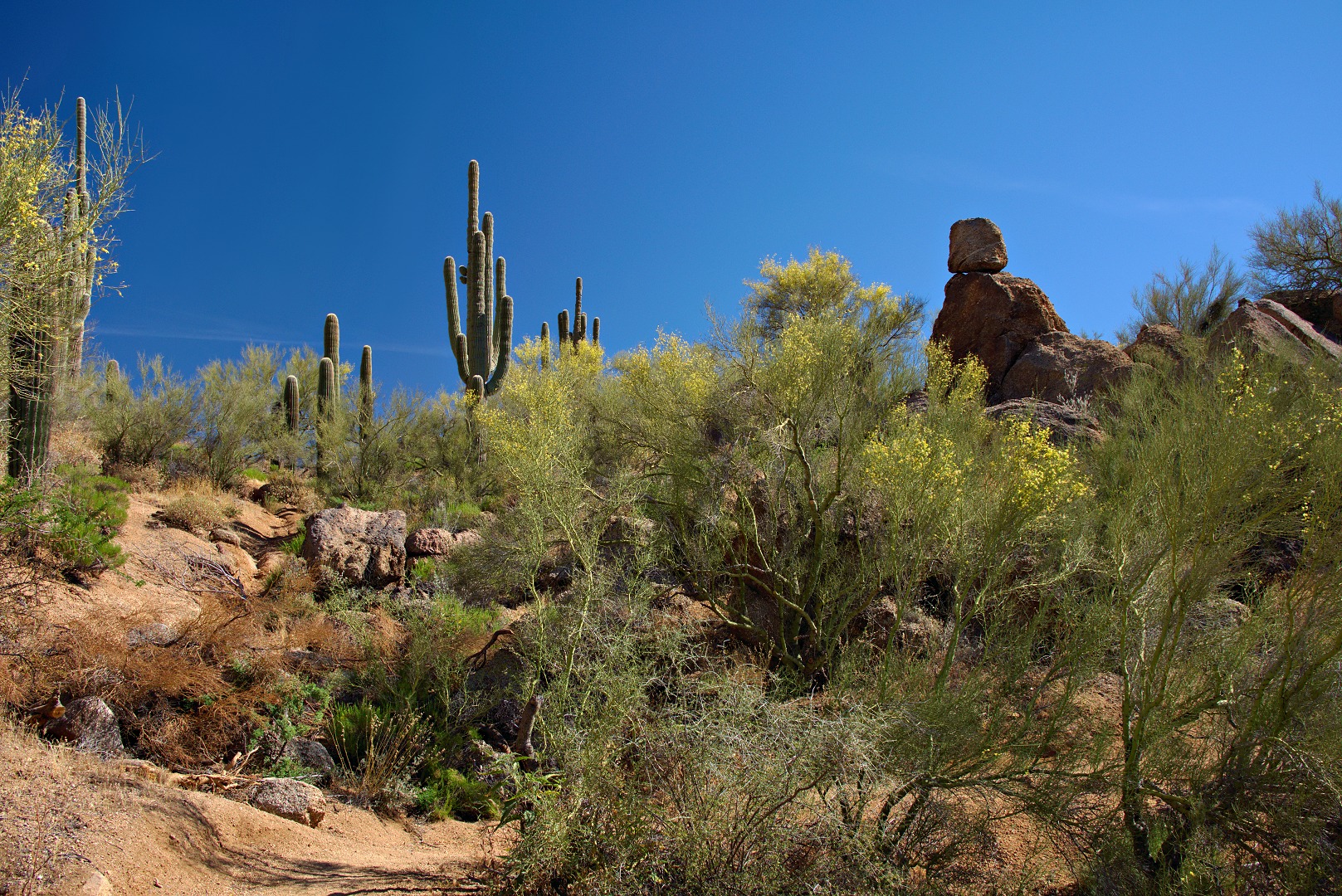 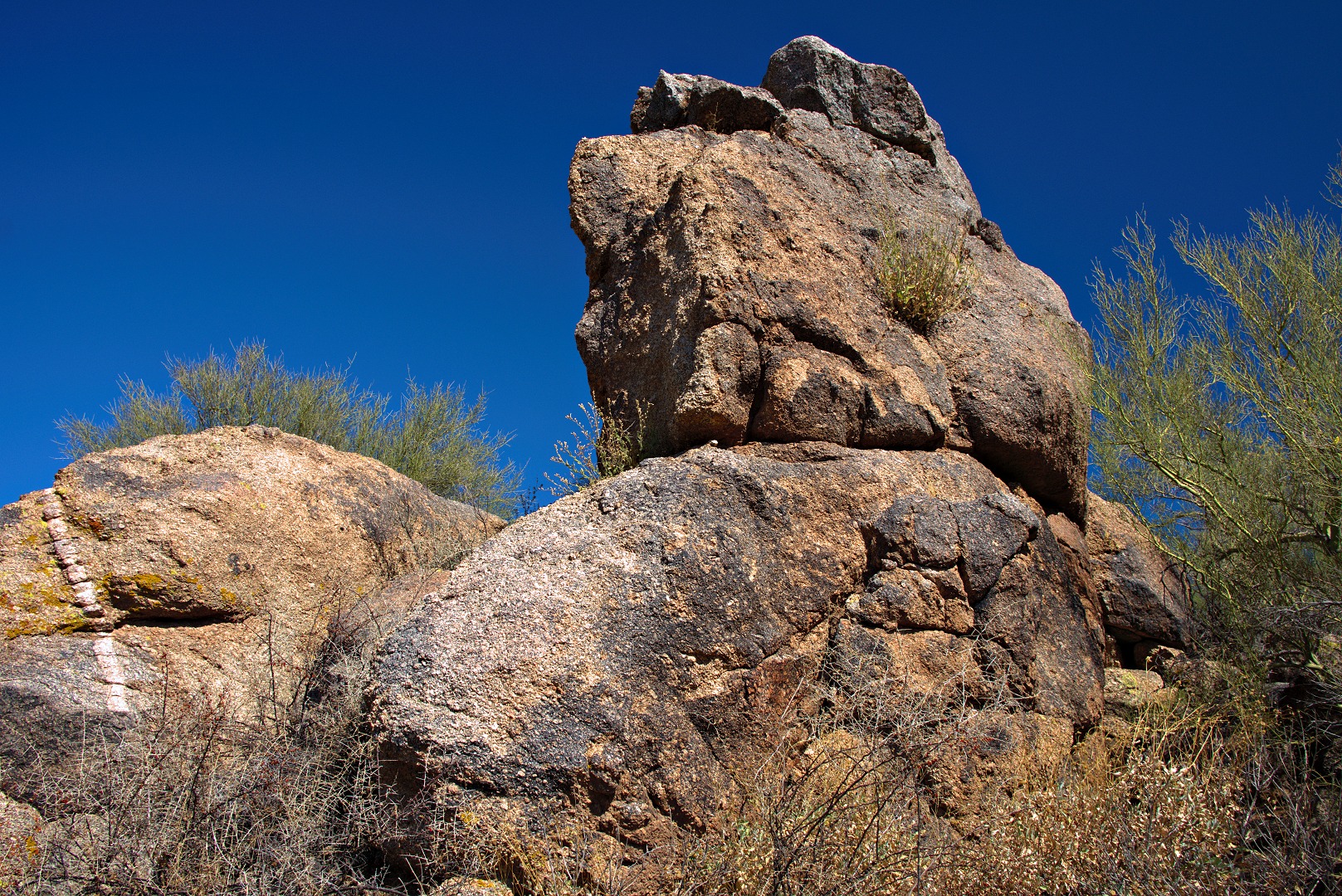 A view of Four Peaks off in the distance: Sarge got some more water as I took the next two photos.  It worked out perfectly because by the time he was done, I too was done taking photos of this barrel cactus next to a small boulder. 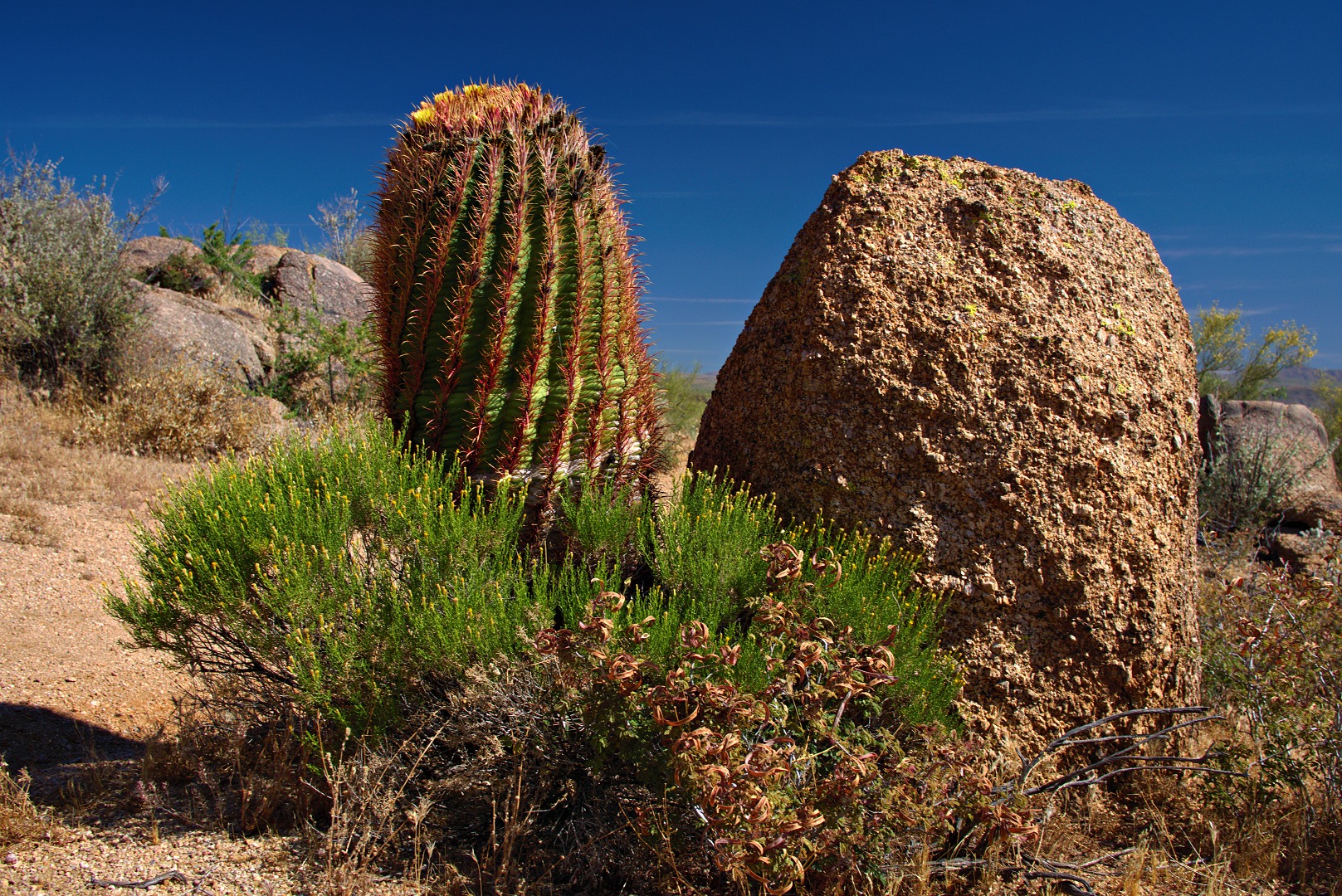 I spent more than a few shots focusing on different portions of the top of the barrel cactus. Several bees were buzzing around the cactus.  I was hoping to get a photo of a bee on the cactus; this is the closest I got though.  The bee was moving too fast for the 1/100 sec shutter speed.  But even if I had been using a faster shutter speed, it still probably would’ve been fuzzy due to inadequate depth of field. 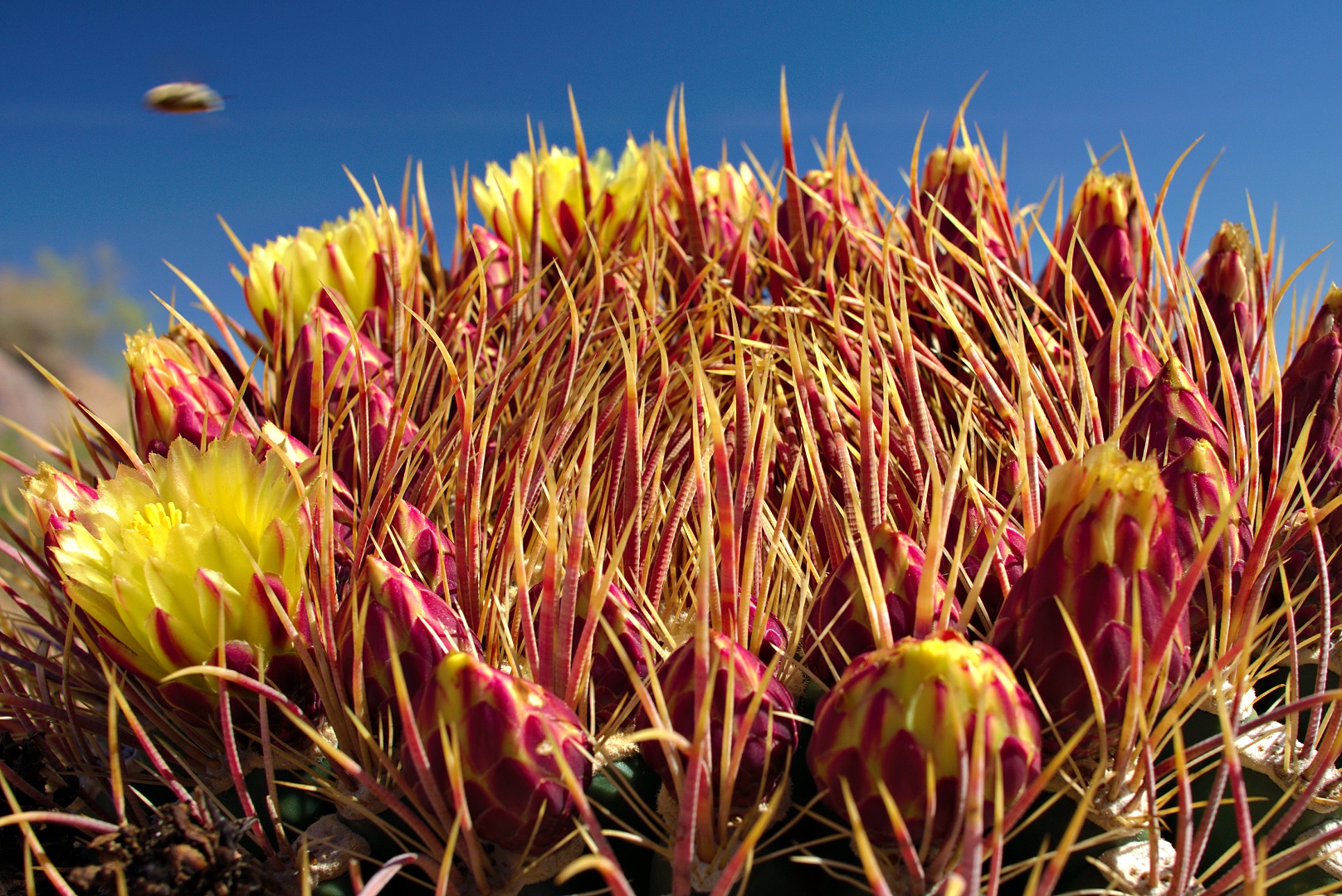