Friday’s hike took us out to the Dixie Mine, past the nearby petroglyphs, and then past even more petroglyphs where we got to scramble up a section of smooth stone in the wash.

Seven of us were on Friday’s hike.  From left to right are Bill, Amy, Linda, Marilyn, Doug, and Jane.  Marilyn and Jane were visiting from Mesa. 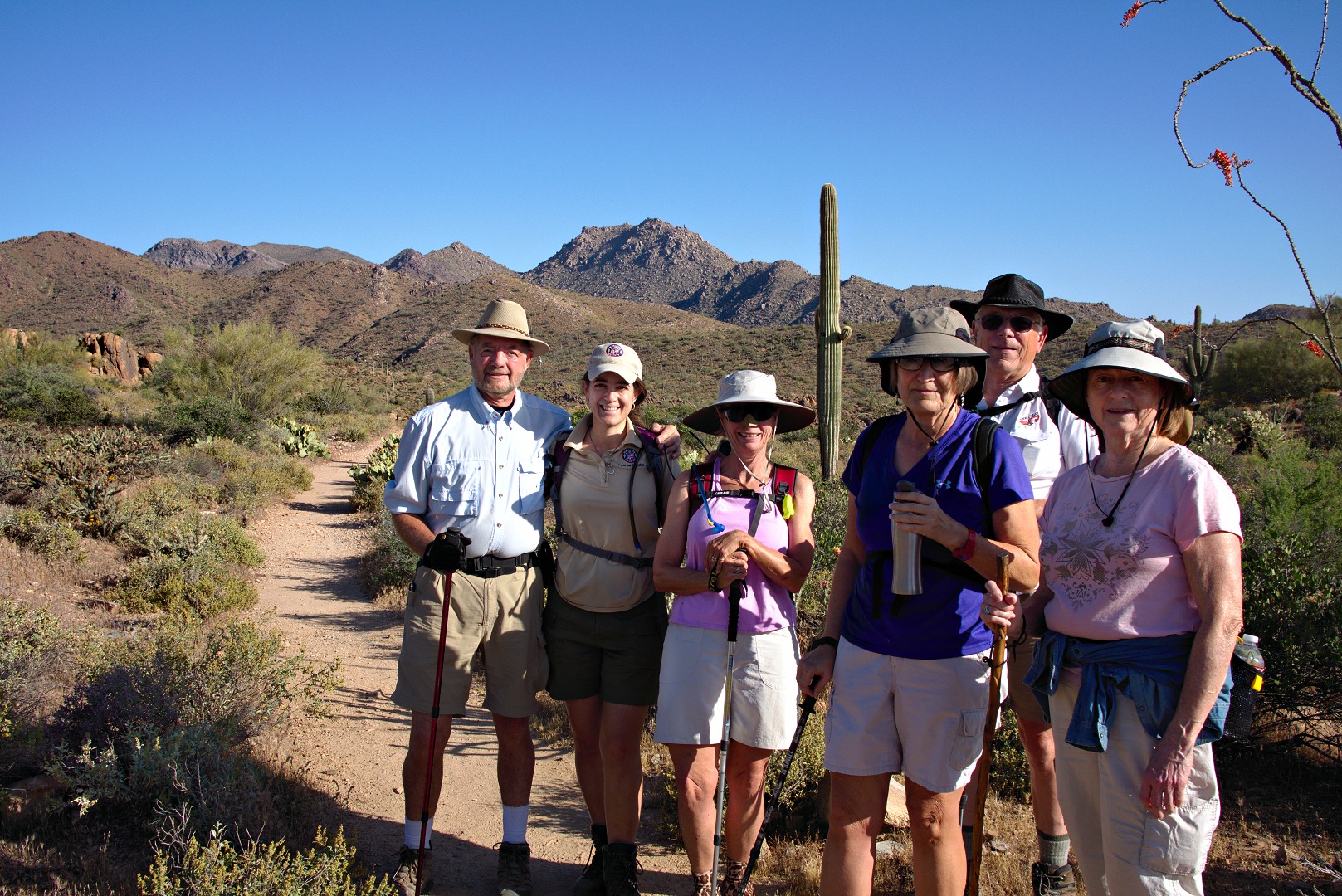 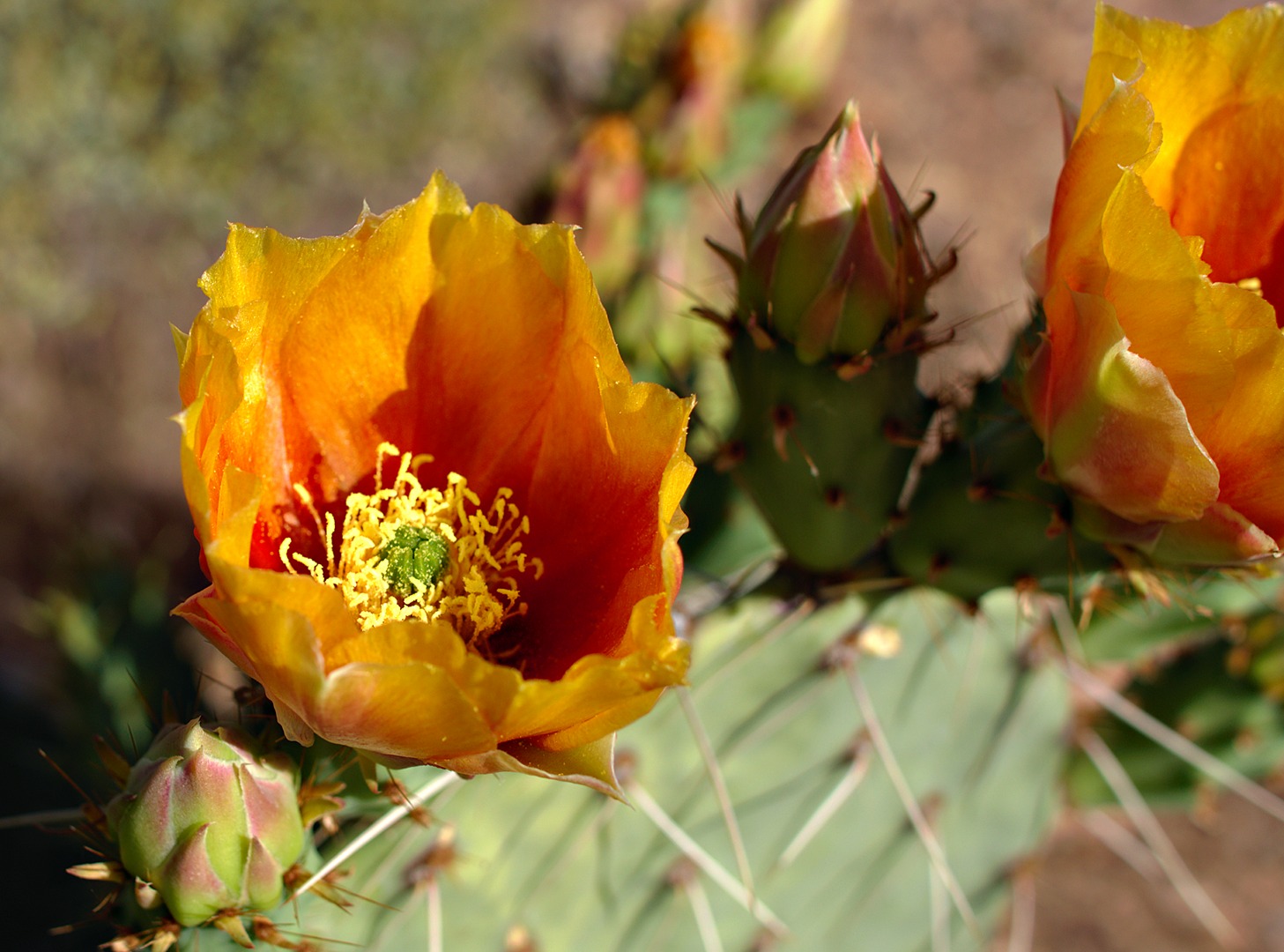 Some of the saguaros are starting to bloom! 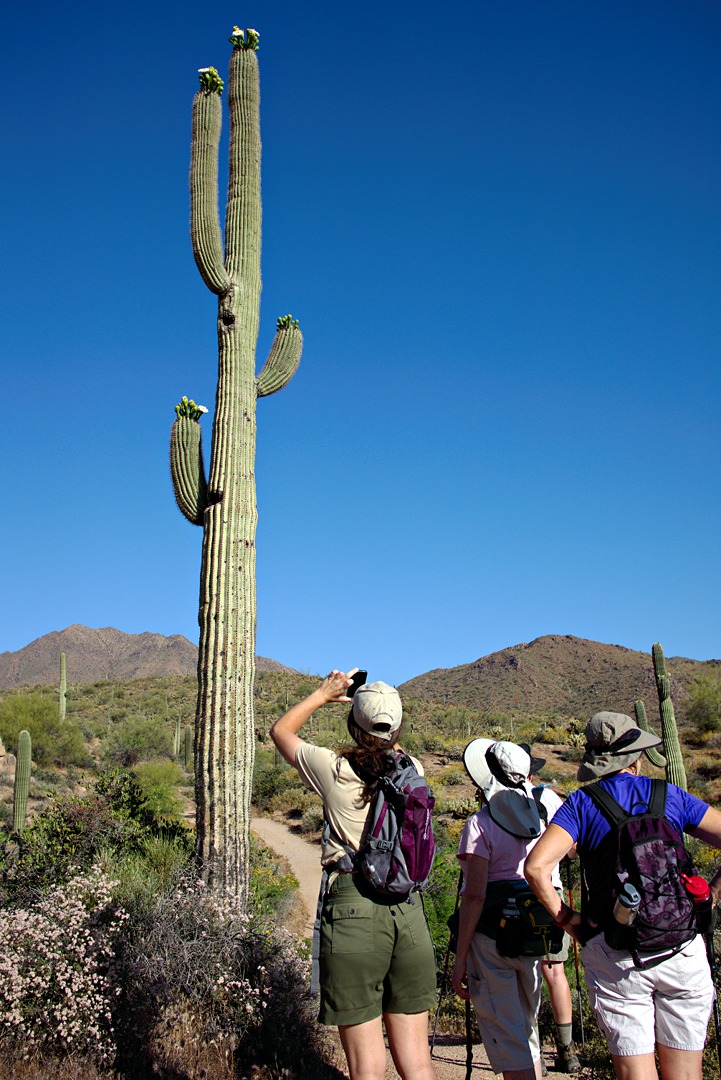 The rest of the group got ahead of me a few times as I practiced photography: 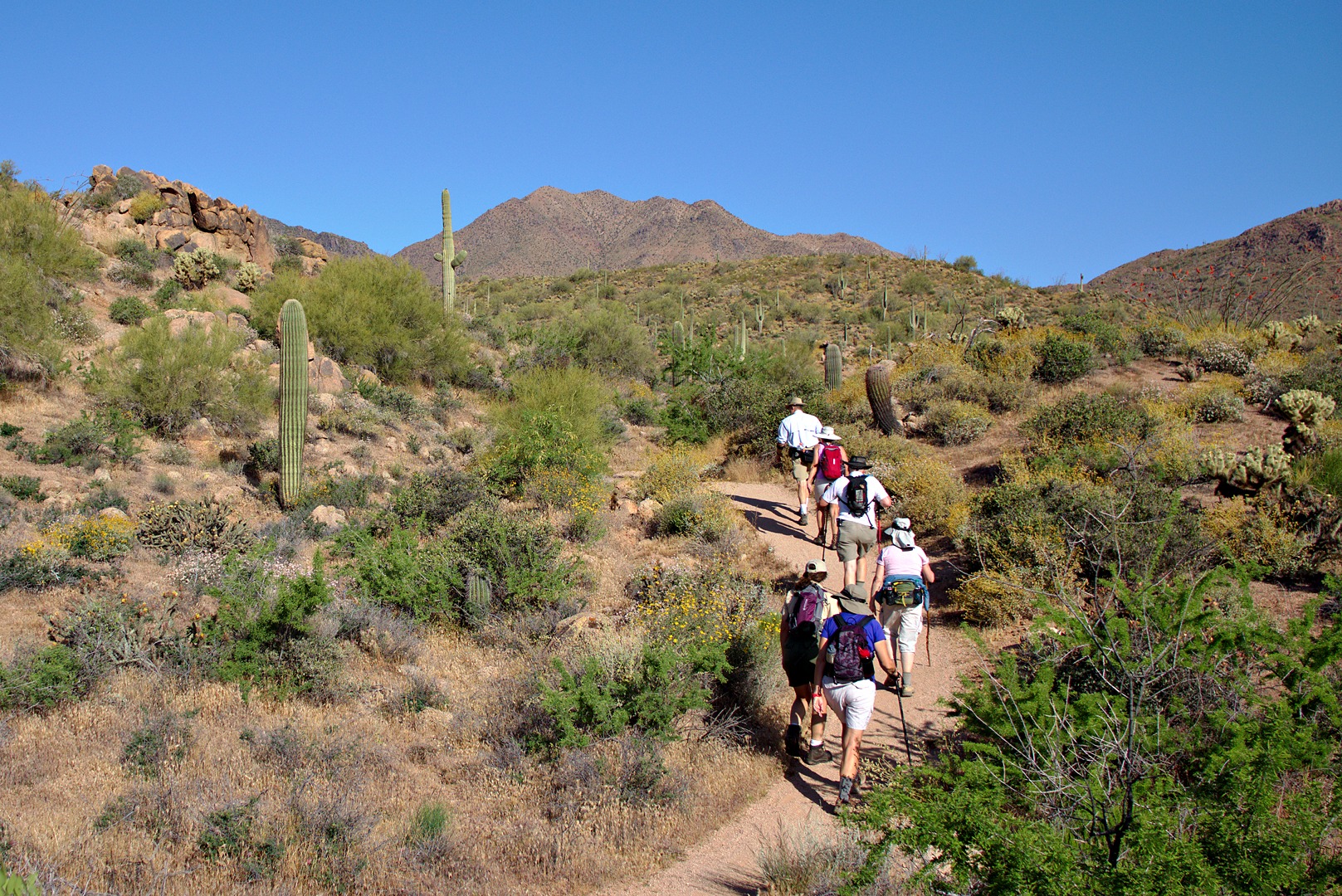 These small reddish-orange berries are wolfberries.  I haven’t tried any, but I’m told that they’re edible and sort of taste like a tomato. 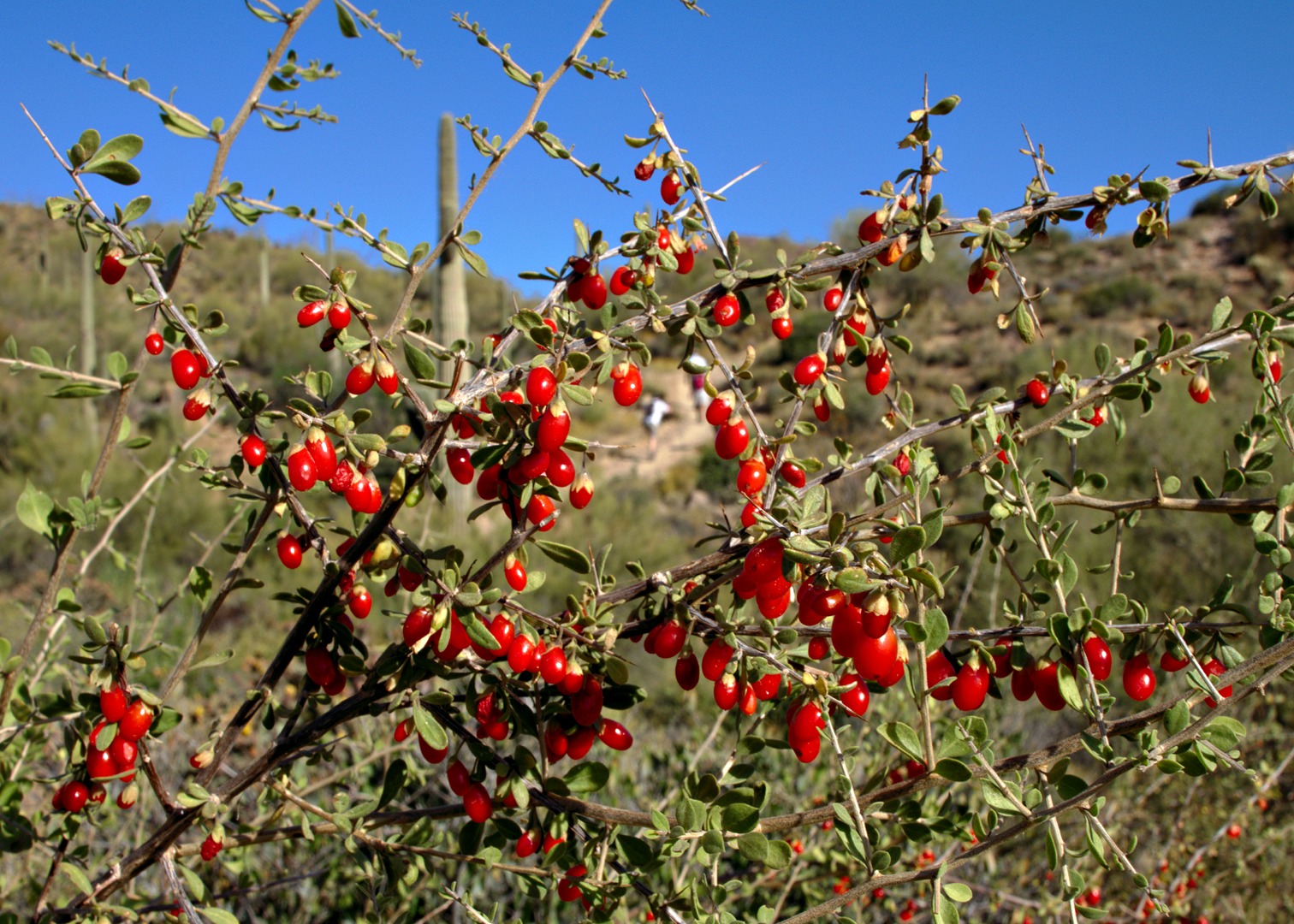 The brittlebush is starting to wilt, but the many of the ocotillo now have blossoms. 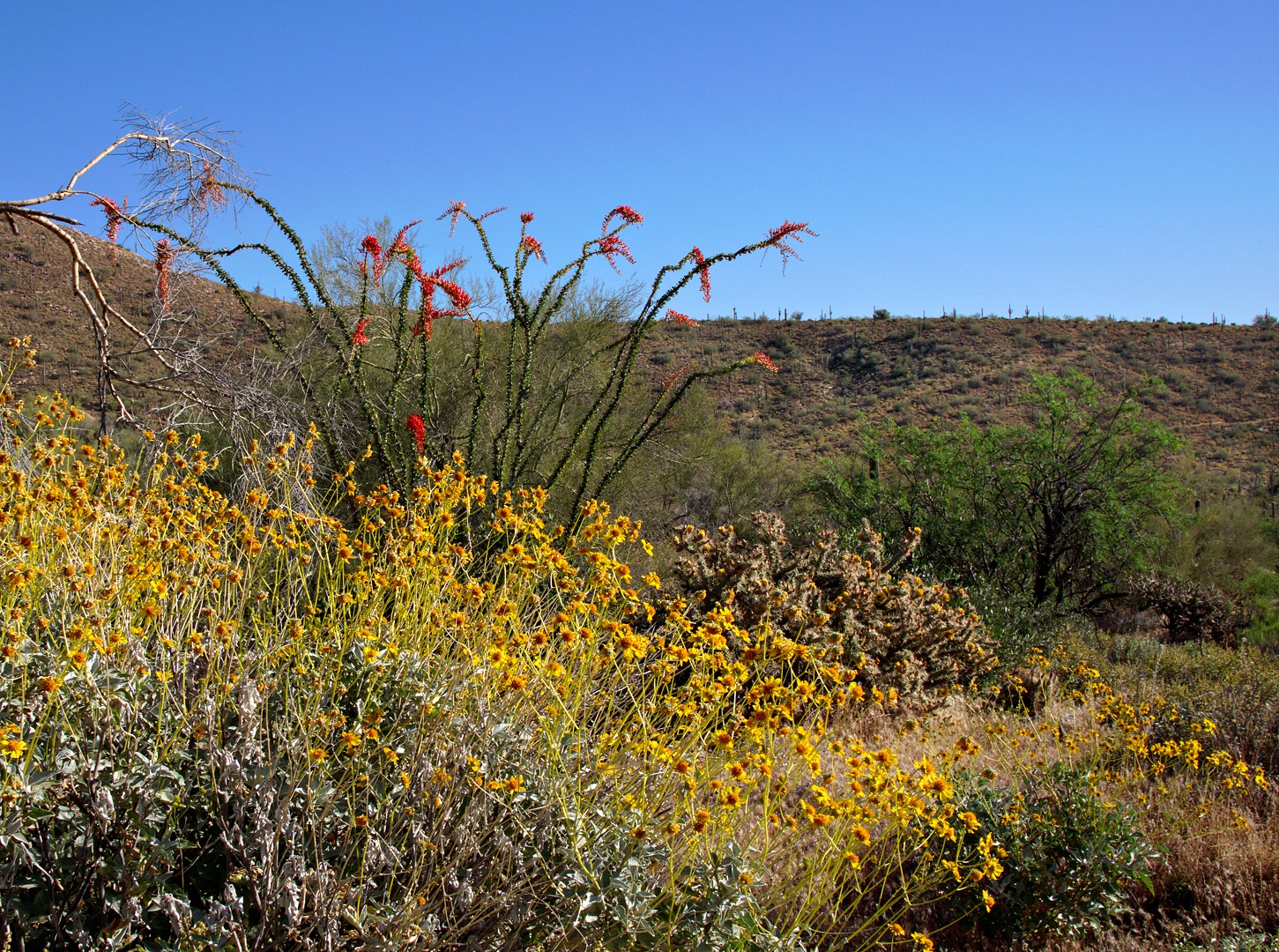 The top of Thompson Peak is framed by the blooming creosote bush. 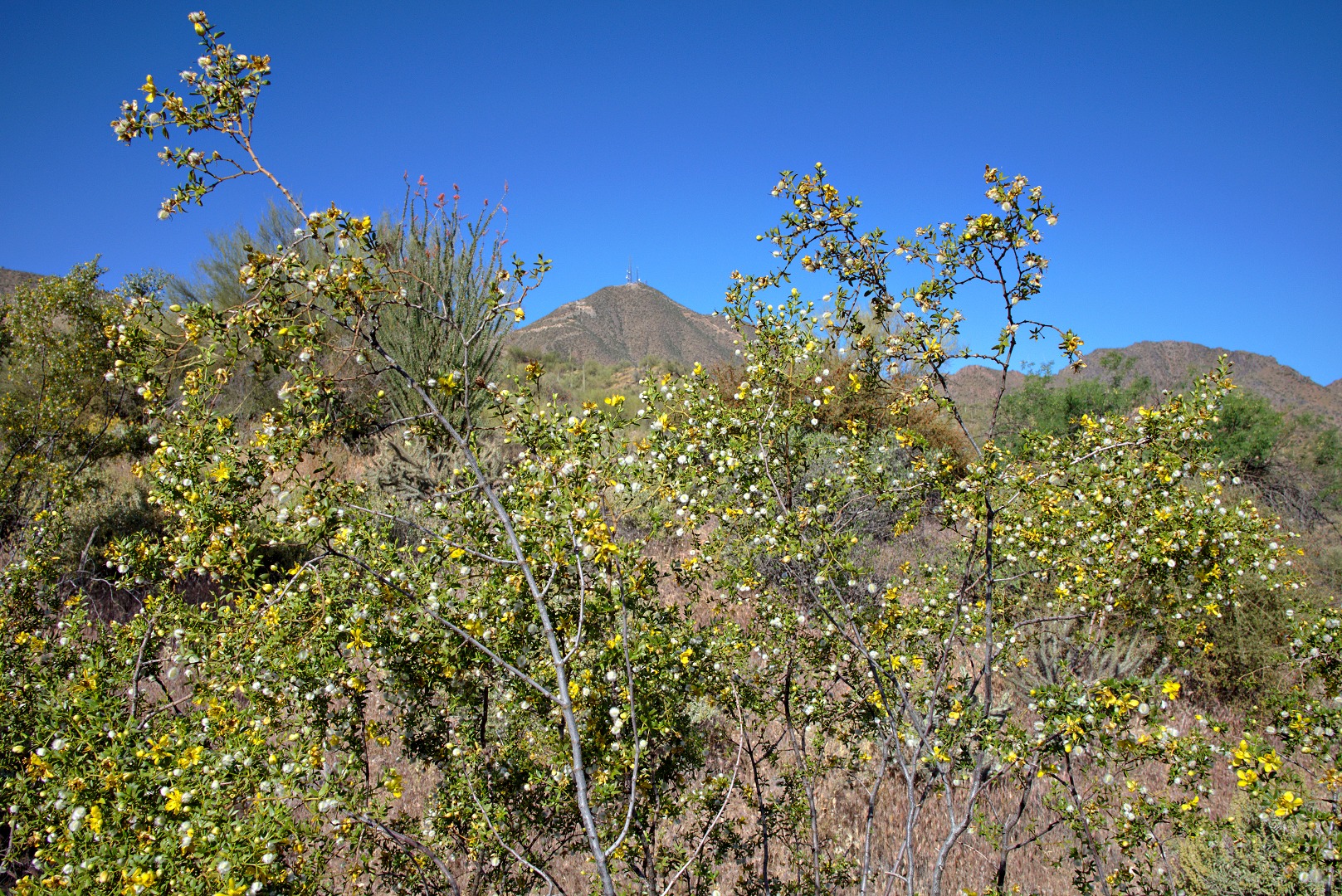 Ranger Amy tells us the story of the Swiss construction company who ended up constructing three roads, each successively less steep up to the top of Thompson Peak.  I have hiked up the current road once.  I shudder to think of what it would’ve been like to go up either of the earlier two attempts as the present road is still very steep!  Scars of the earlier road attempts are still visible on Thompson Peak. 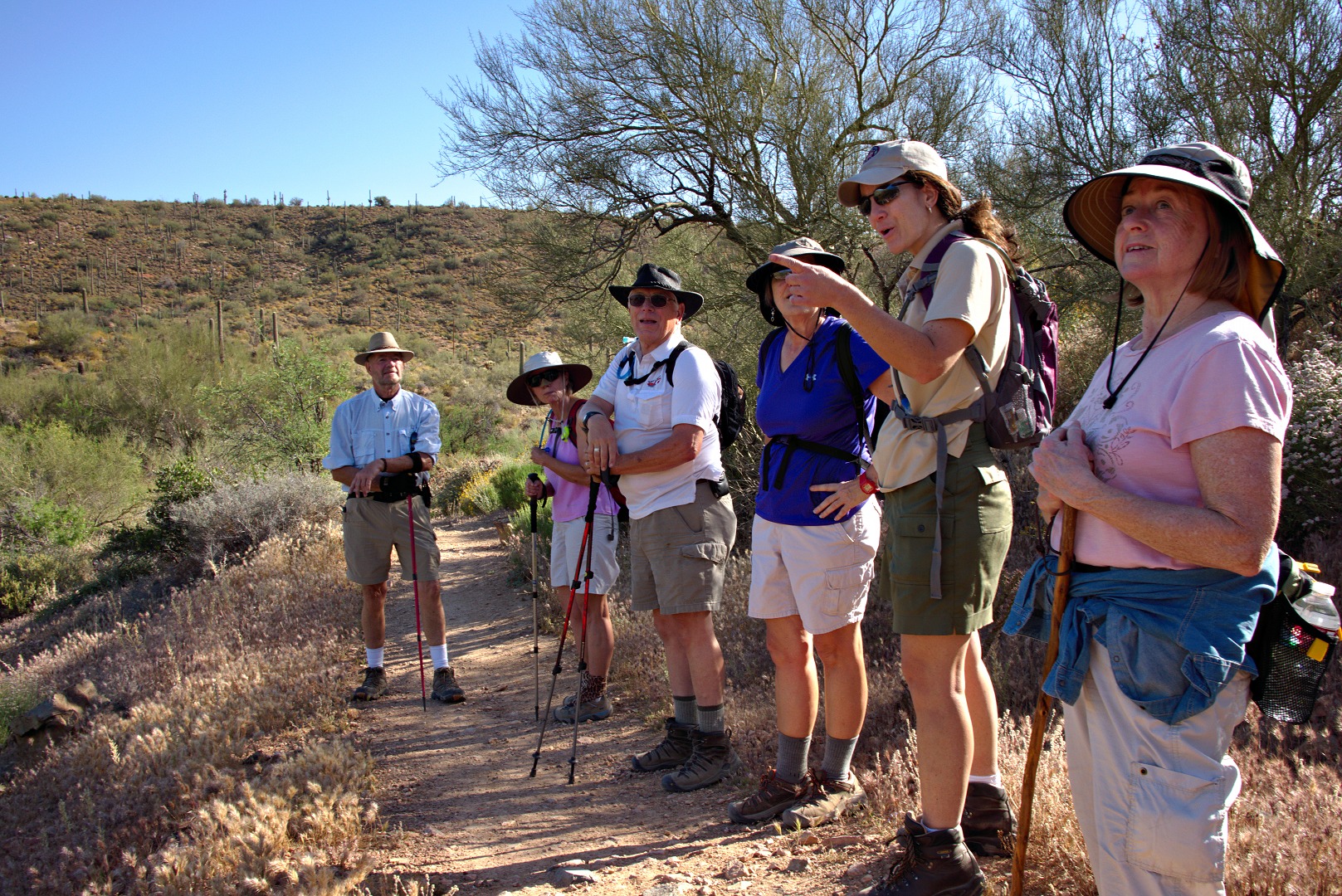 This is the main petroglyph panel near the mine.  There are a few more petroglyphs scattered above, below, and to the sides of this panel. 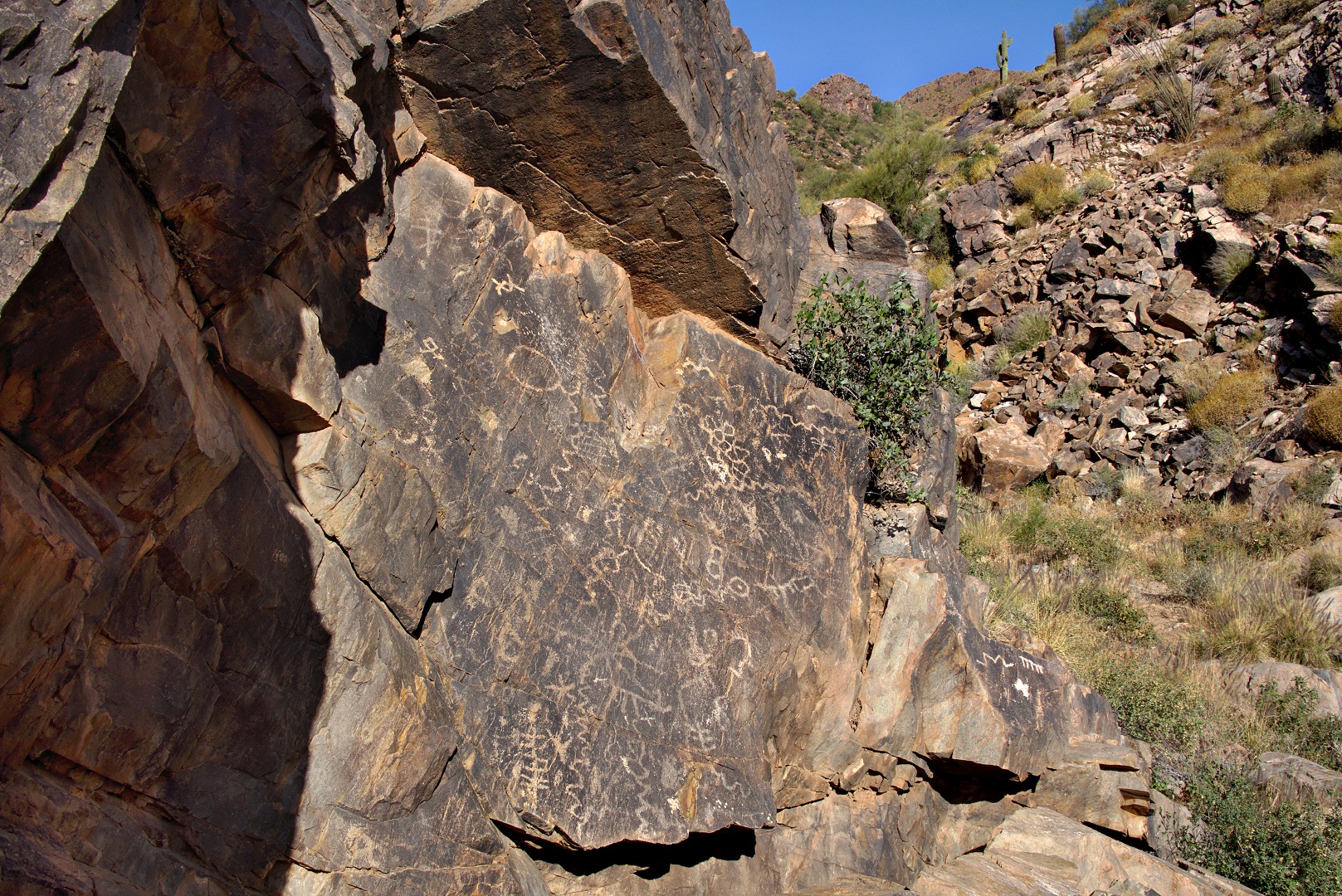 Doug and Bill wait for the rest of us to examine the petroglyphs: 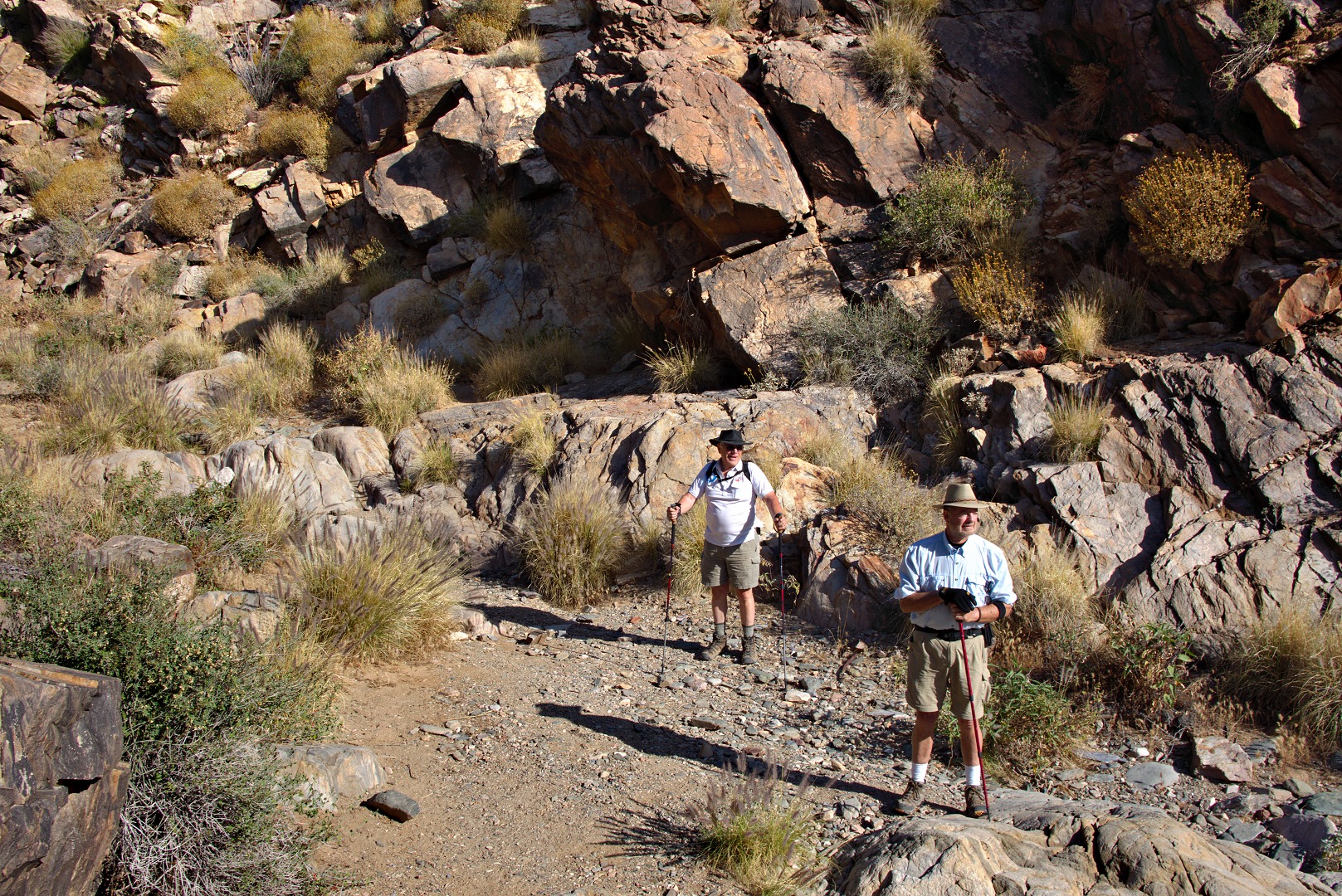 A cropped version of the above photo: 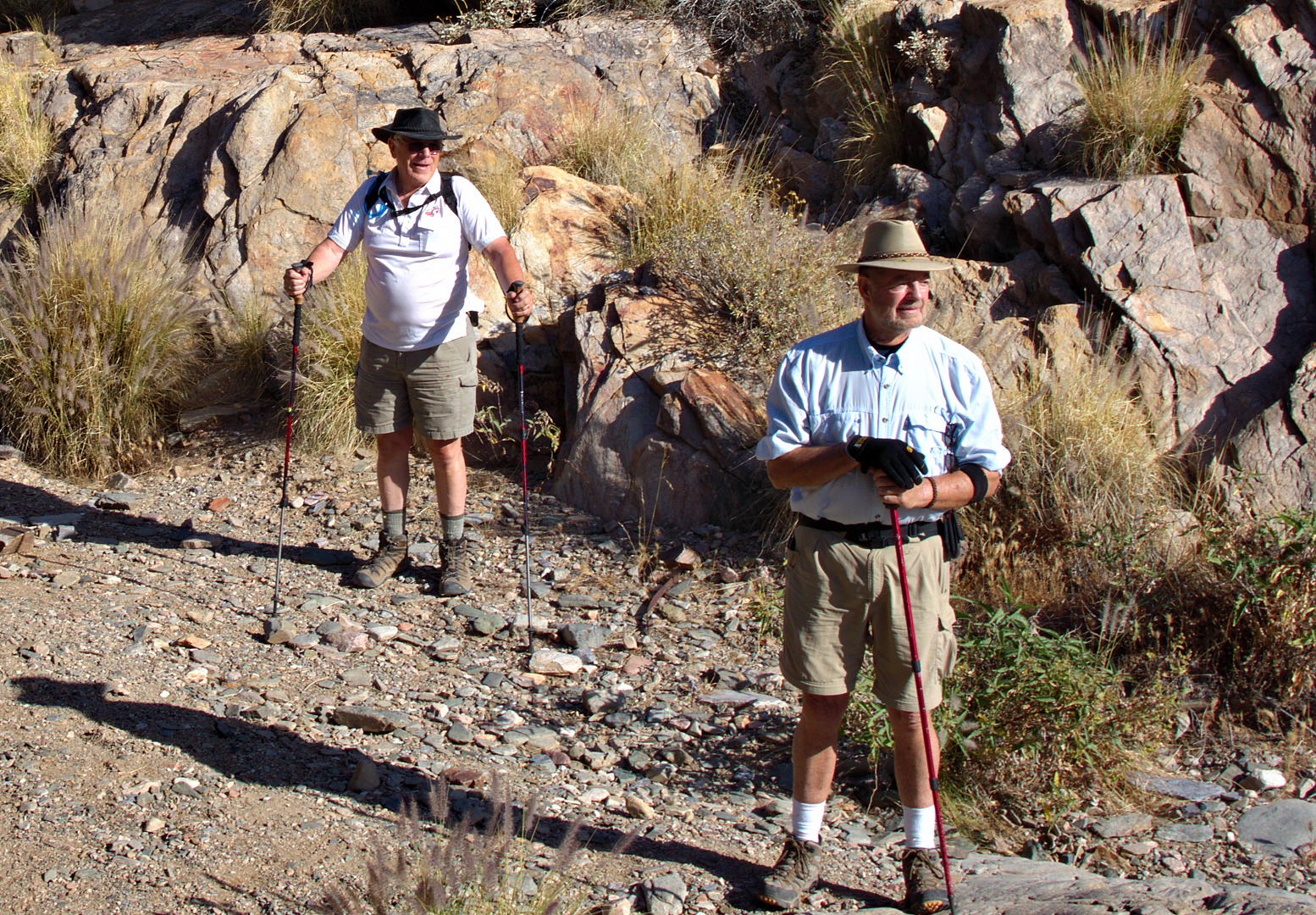 We passed this area on our way to the next petroglyph panel: 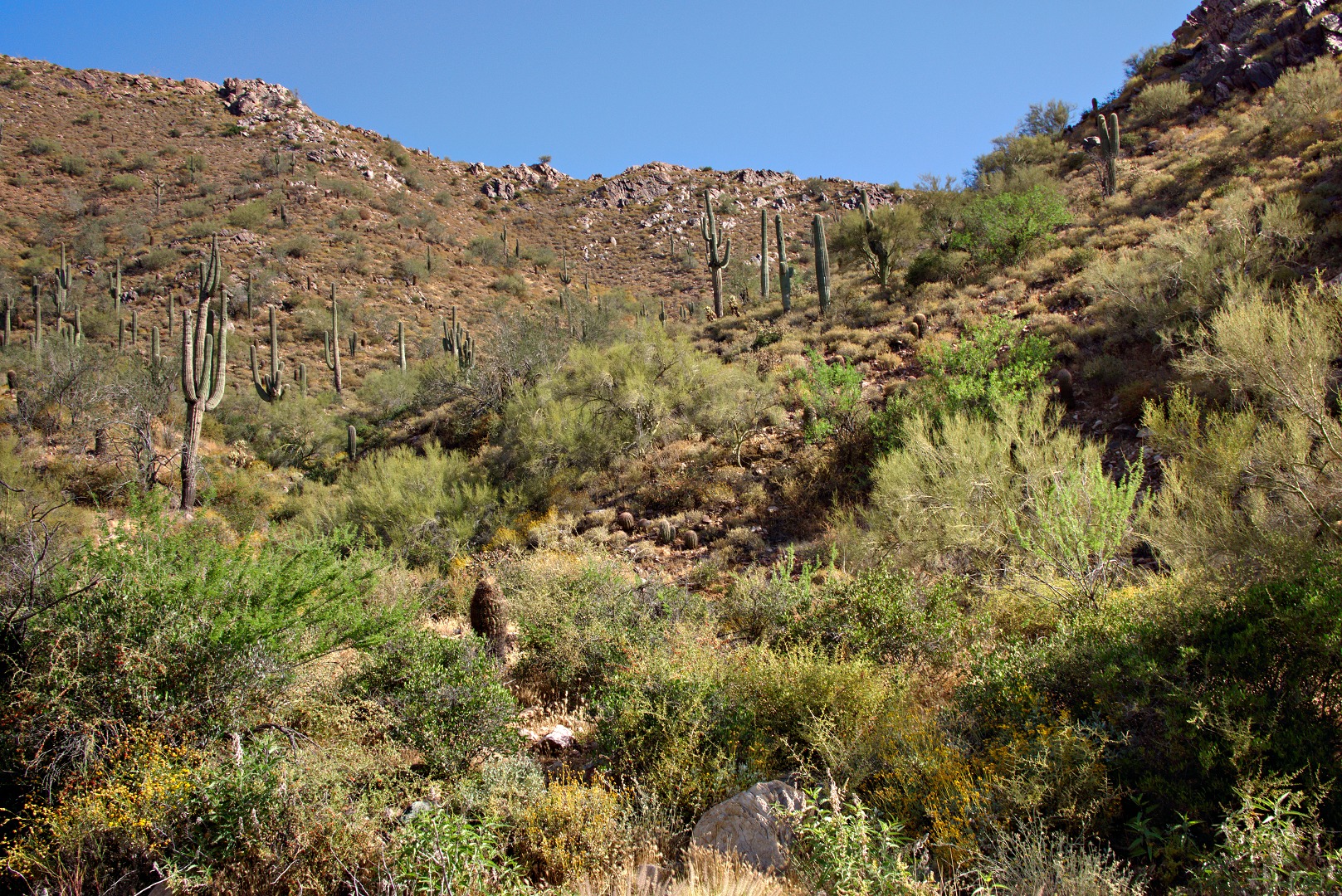 The petroglyphs at the next area are scattered about.  Patience and a willingness to examine the rock closely is required for finding some of them.  Here, Amy has made her way past some waist-high brush to get a better look at some of them: 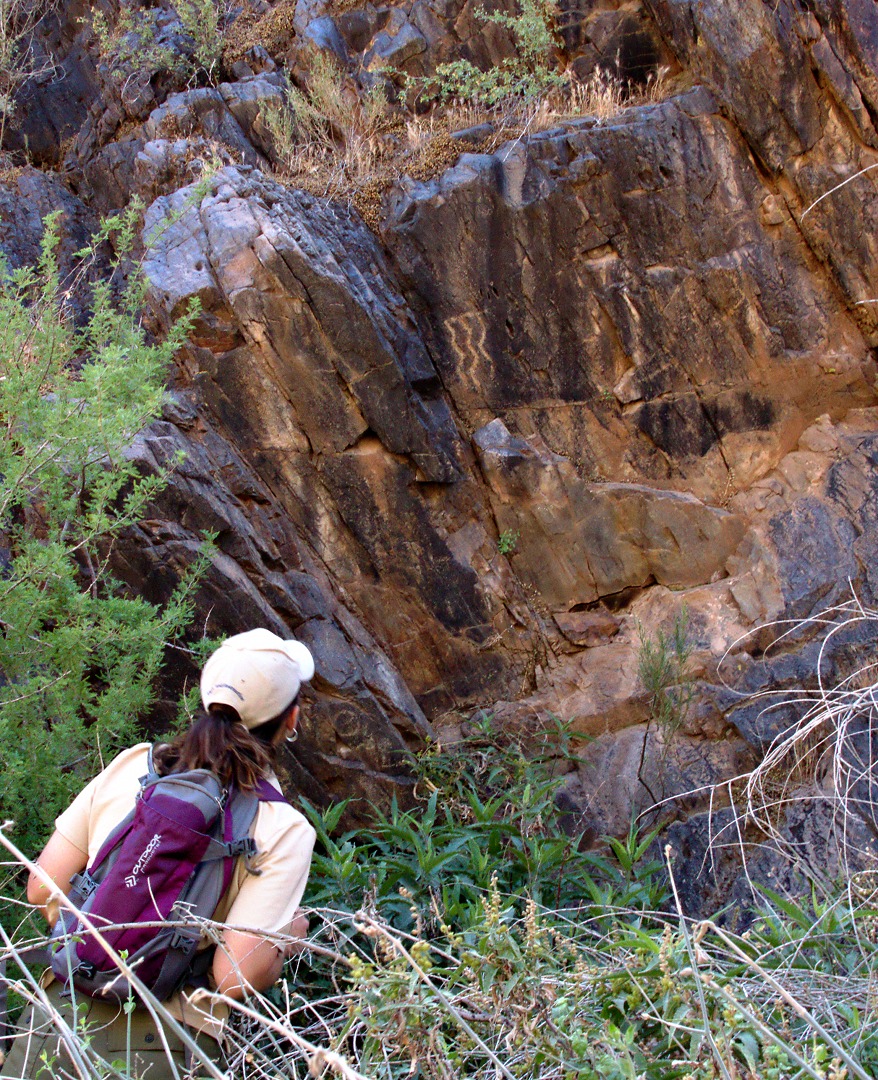 It appears that the Hohokam drew a lizard here.  I have no idea what the other marking might mean. 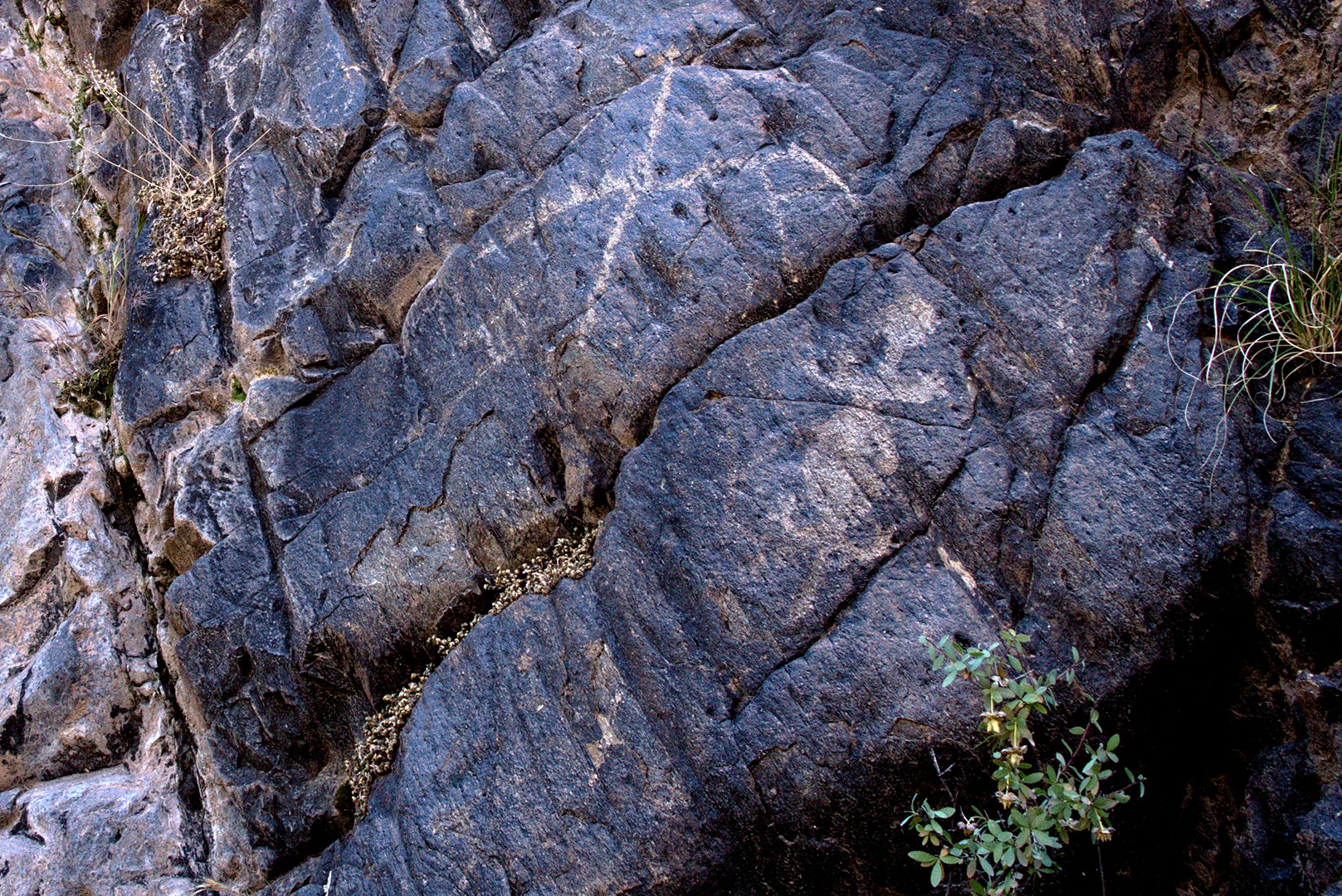 A section of smooth, water polished rock adds a challenge to the hike: 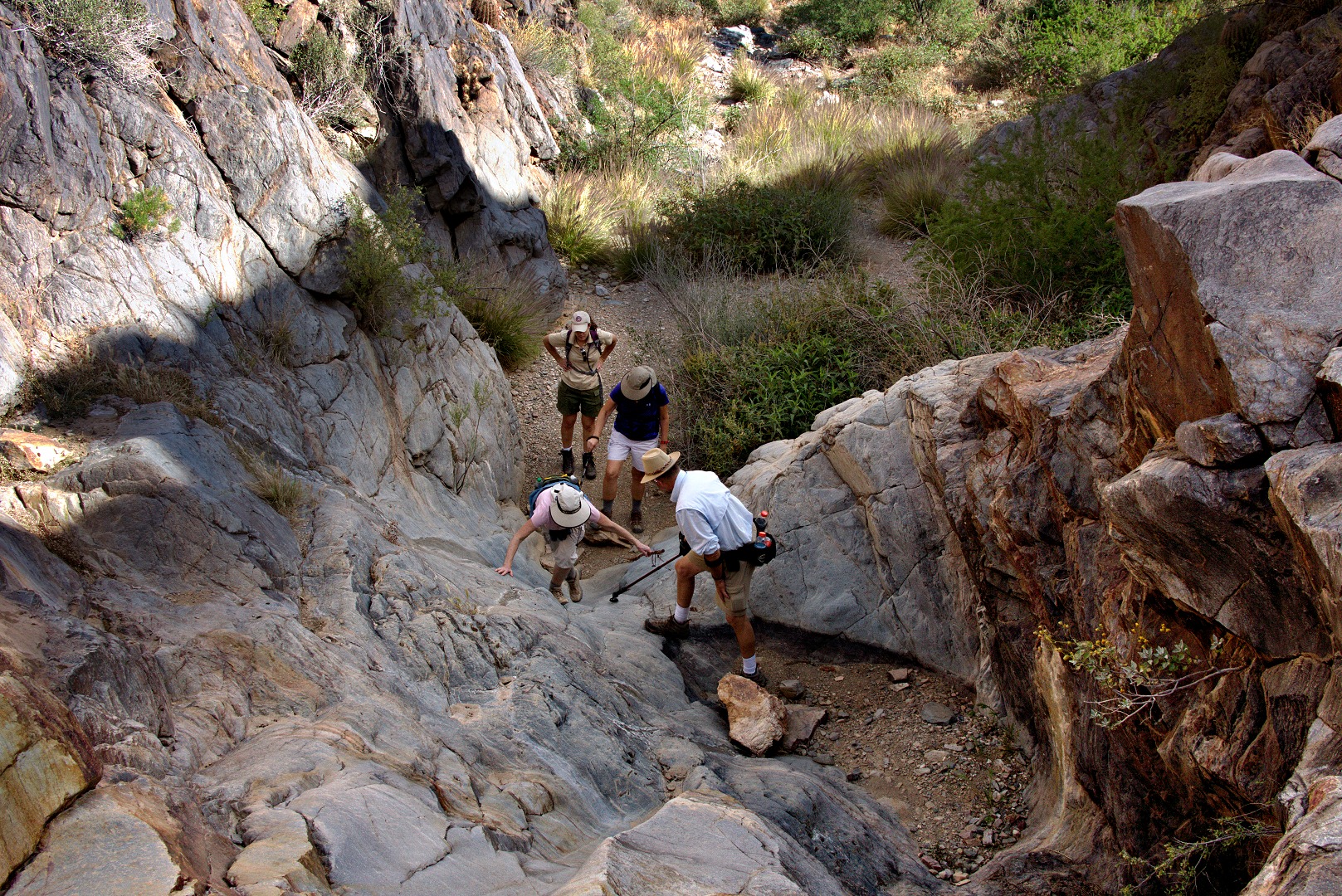 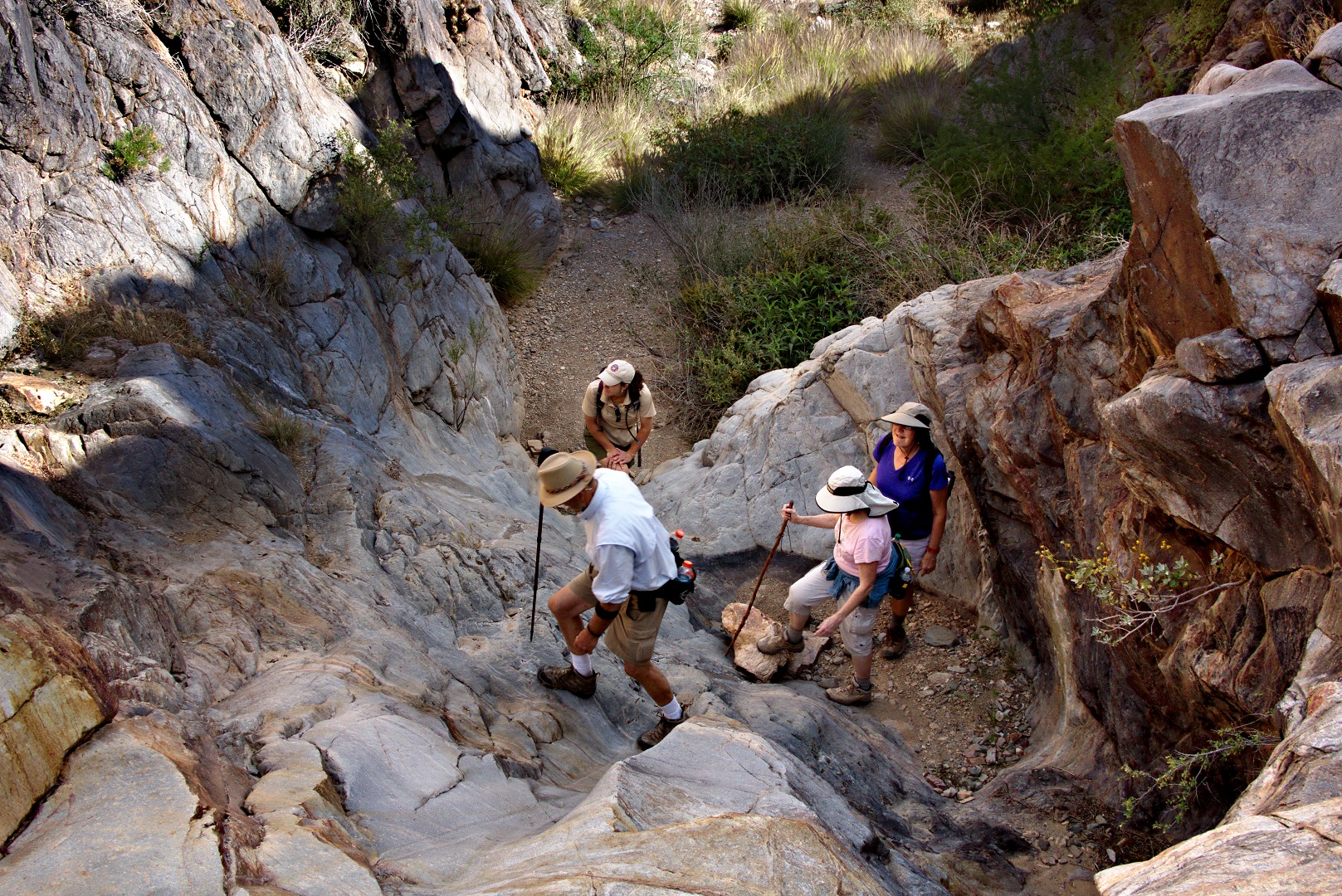 It takes some looking, but there are at least four areas of petoglyphs on this wall.  There’s a wiggly line that might represent a snake towards the upper right of the photo.  They’re difficult to see, but when I zoomed in on the unscaled version, I saw smaller wiggly lines below the larger one – perhaps these represent baby snakes? 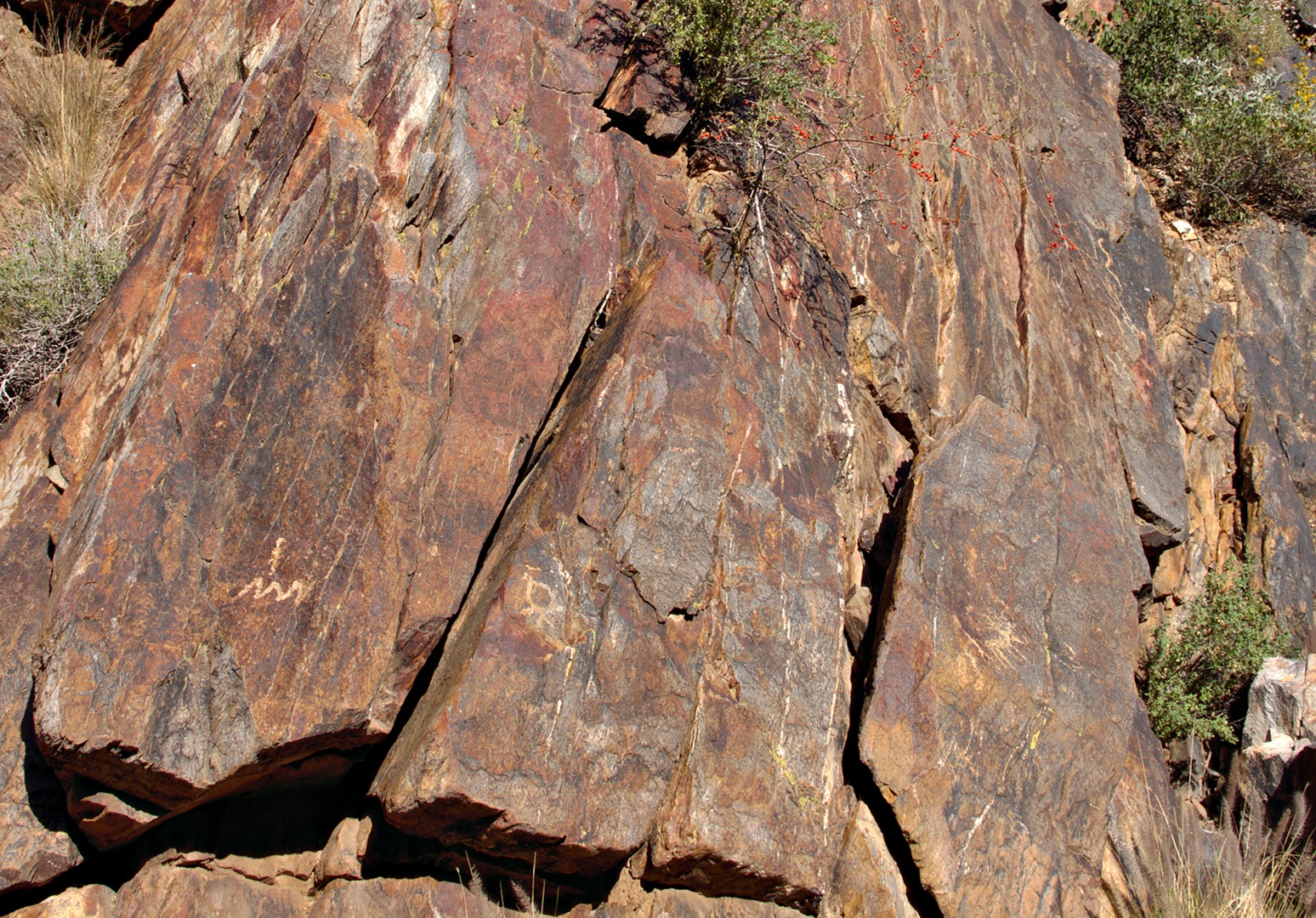 There appears to be a drawing of someone falling head-first in this photo.  Perhaps it’s a warning to not go too high?  (It would’ve taken some additional scrambling to get up above the drawing.) 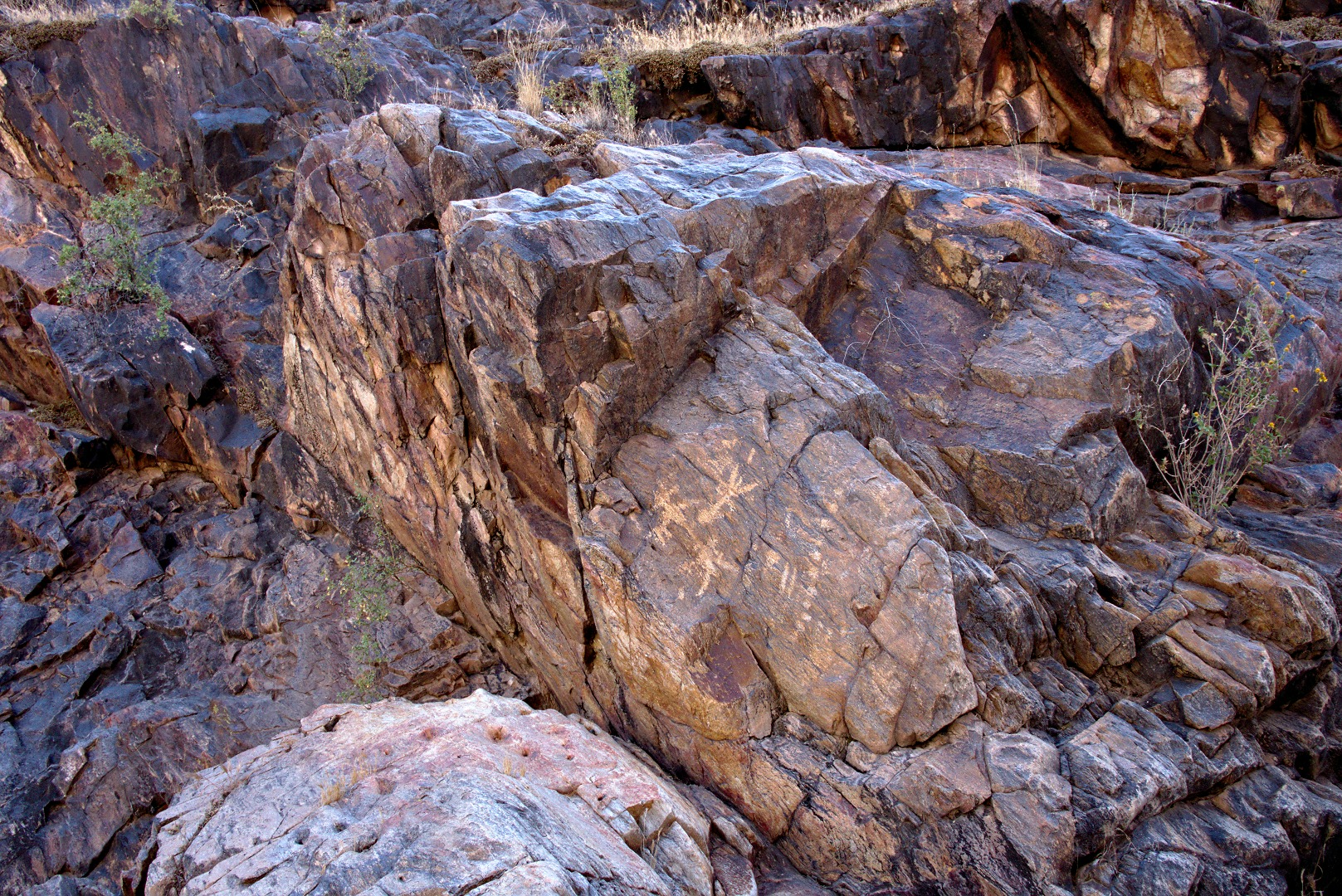 Amy poses for a photo at the top of the “waterfall” area.  (I’m not sure that it’s really a waterfall…) 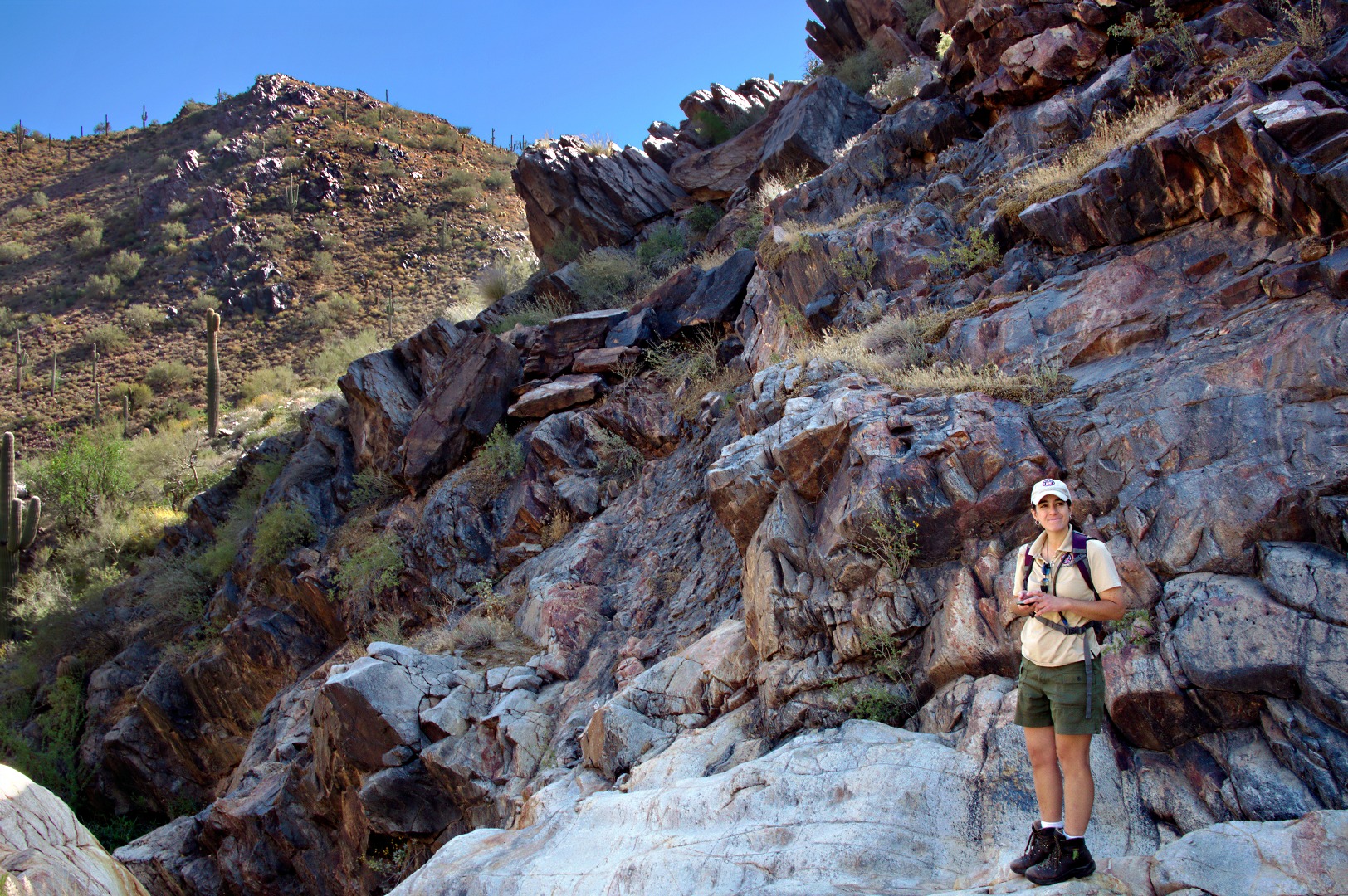 A look at what’s ahead of us: 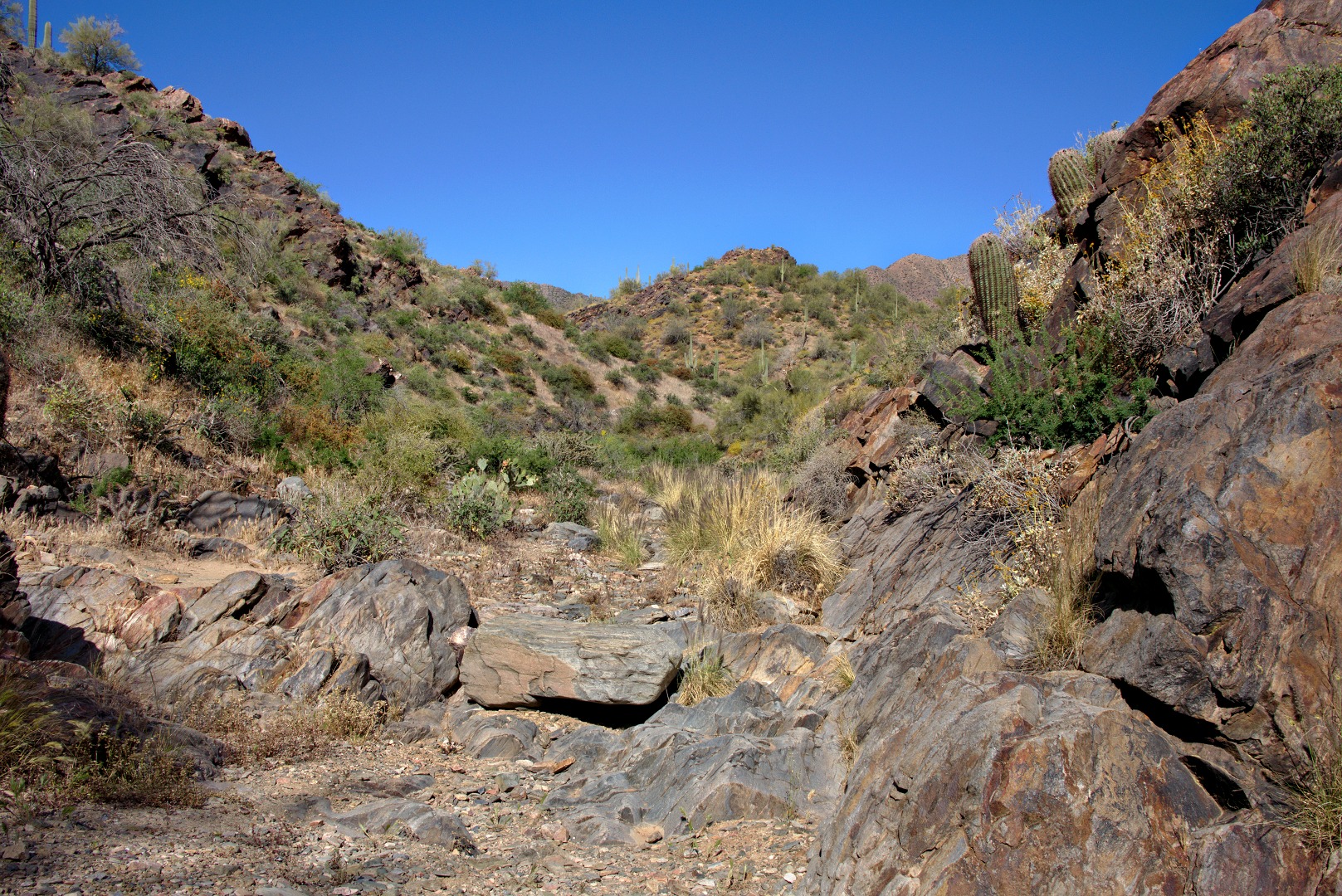 Amy takes a photo looking down and past the area we just scrambled up: 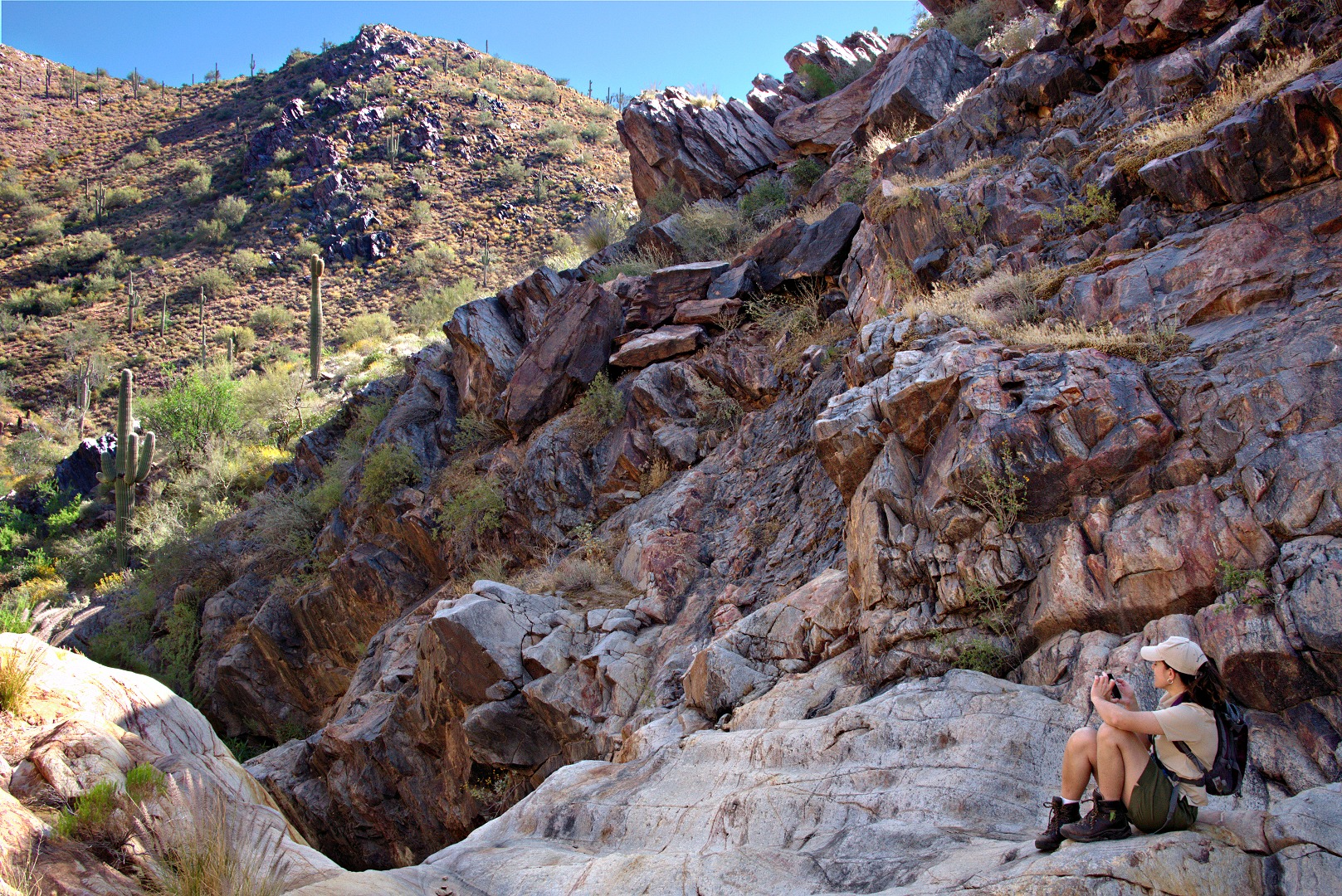 The canyon was still scenic as we continued on: 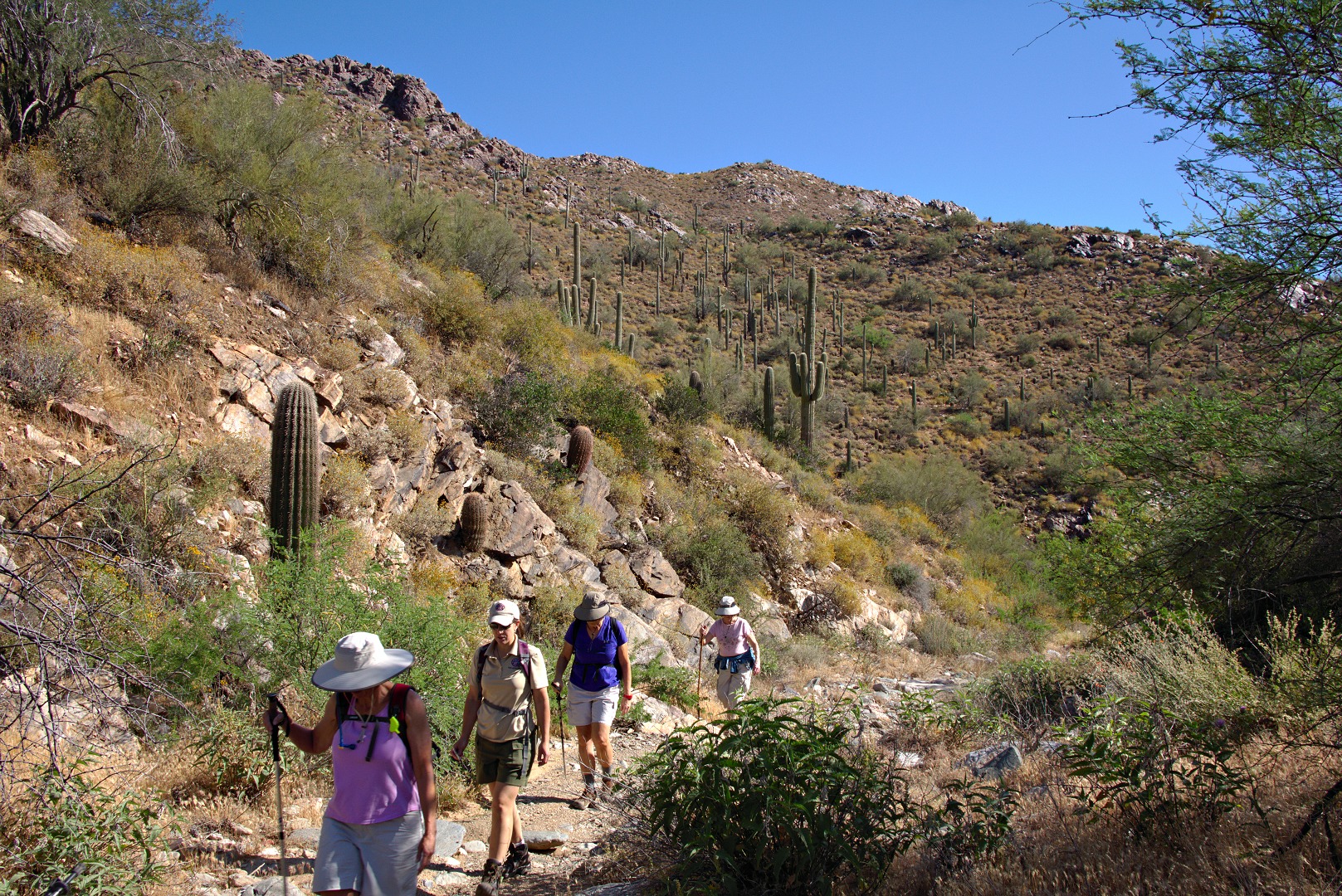 We had returned to the Dixie Mine Trail when I took this photo: 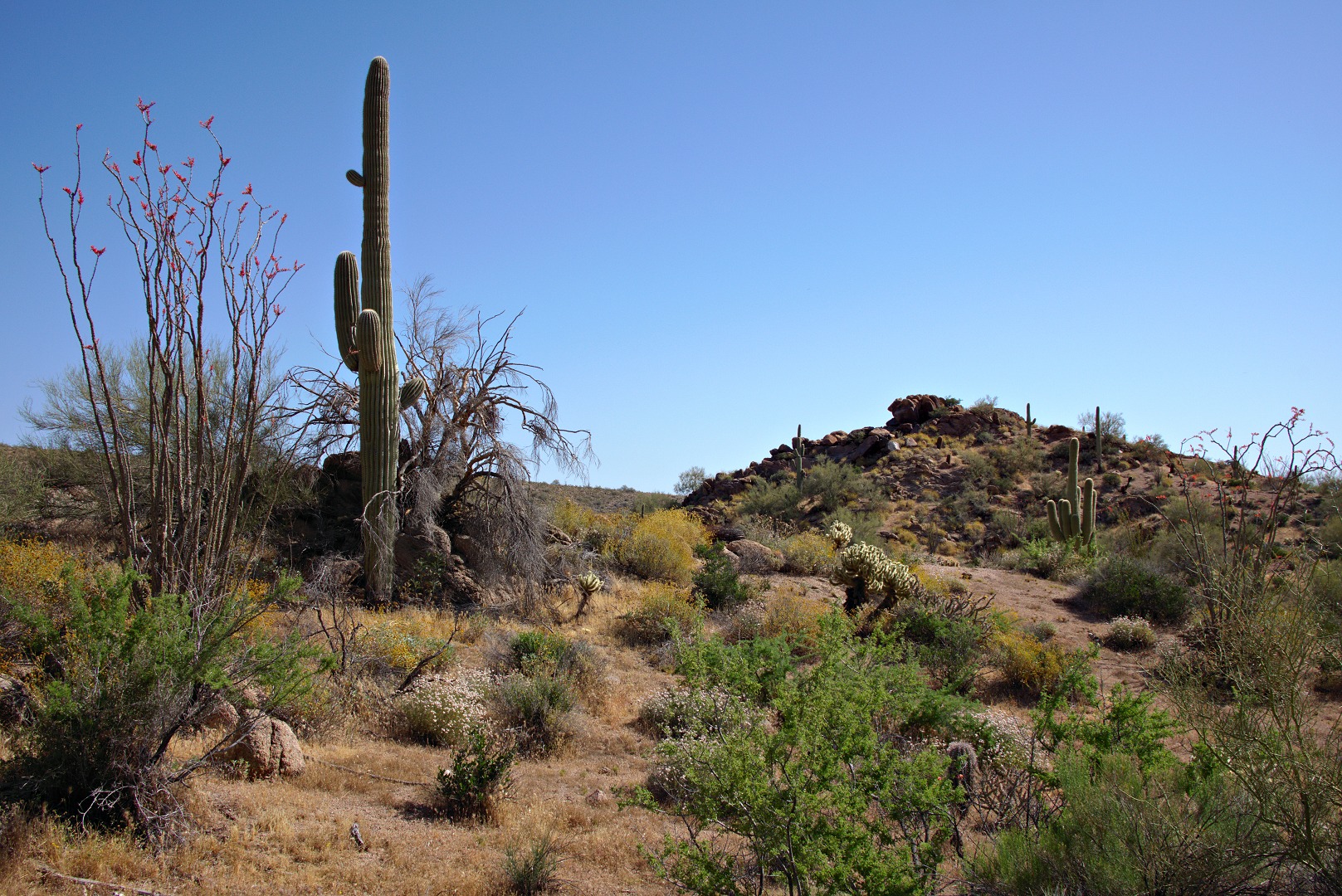 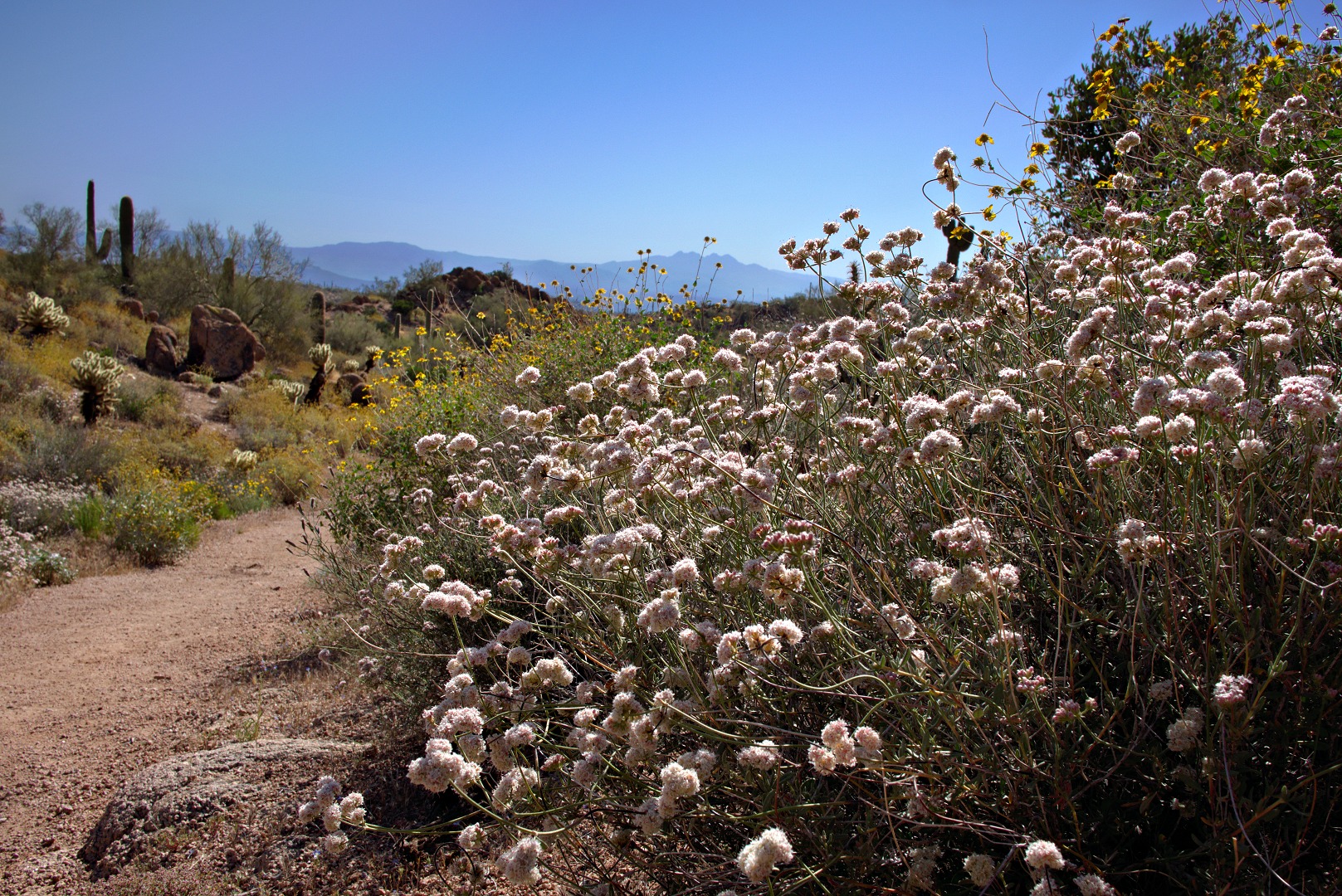 Purple-flowered Rhatany growing amidst a Christmas Cholla.  Amy told us that it can be a kind of parasite, though I saw some growing by itself today when I rode my bike. 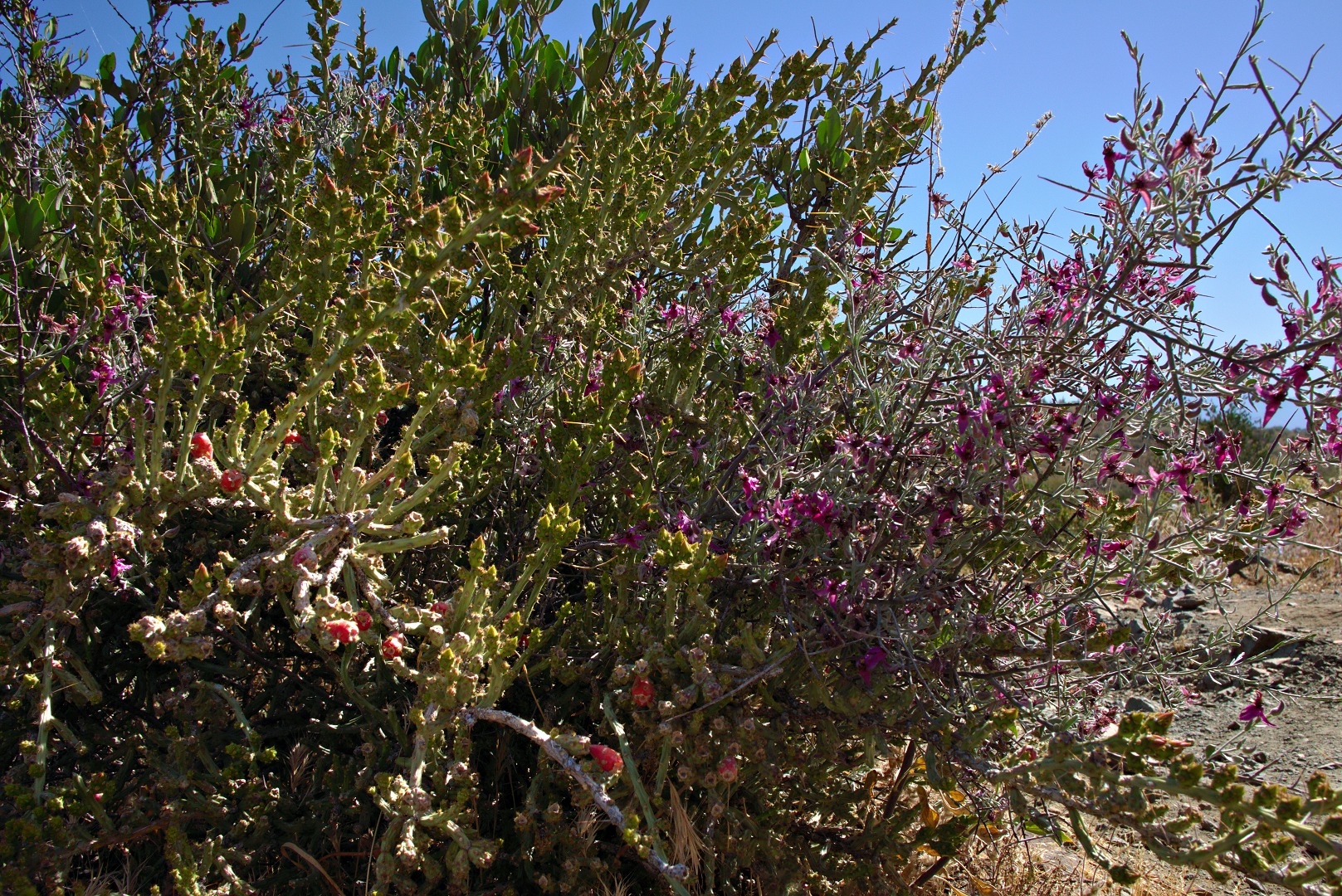 Marilyn, on the Pemberton

Marie and her Artwork