On Sunday, Marilyn, Joe, Nick, and I hiked out near Saguaro Lake.  We did the Goldfield High Country via Gateway Canyon hike.  This hike is supposed to be only eight miles in length and, if you manage to do it efficiently without any wrong turns or detours, it might actually turn out to be that long.  We, however, ended up hiking 9.72 miles with 1,219 feet of total ascent.

There is a maze of trails in the area.  If you are thinking about doing this hike, I strongly recommend downloading one of the GPS tracks from the page describing this hike at hikearizona.com.  I downloaded johnr1’s Official Route to my GPS.   We probably would not have found our way had we not had these GPS tracks.  There are so many trails in the area that it is easy to make a wrong turn or miss a turn.  There were several instances where we got off route even with the track.  Yours truly even hiked a bit over a quarter mile on what seemed to be a good track certain that it would eventually turn and go the right way.  It was, in fact, going almost exactly the wrong way from where we wanted to go.

We started out in the early afternoon on Sunday, but it got dark on the way back.  We all ended up strapping on our headlamps so that we could see the trail during the last couple of miles.

The hike parallels the river for the first couple of miles.  At times, the river is in sight; at other times it’s far enough way that it can’t be seen.  We felt like we were zigzagging our way along this entire stretch.  One of the most difficult parts for me was the sections of river rock.  I don’t move well through this type of terrain due to old injuries. 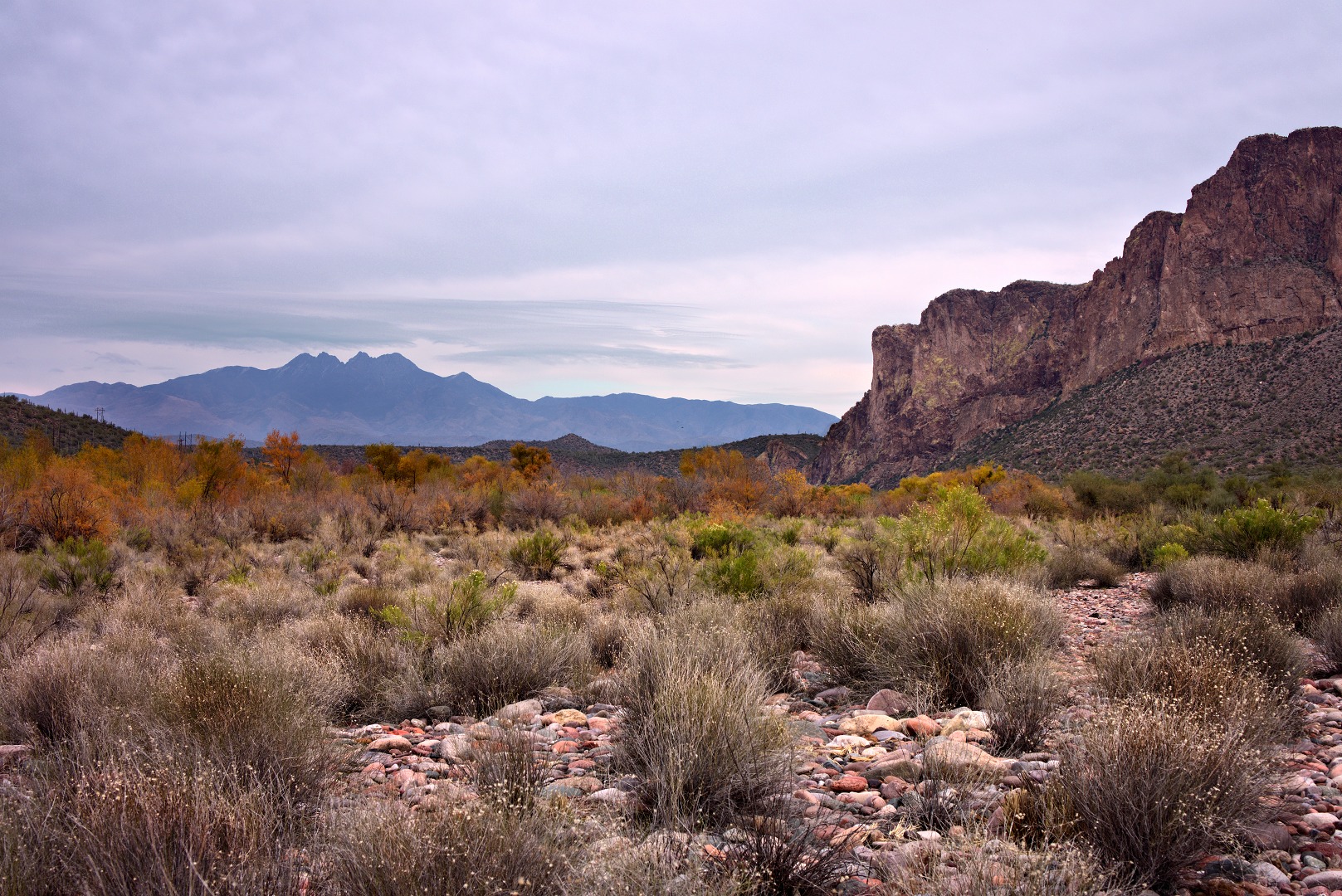 We eventually entered a wash with steep walls.  I found the hiking to be much easier here. The sand underfoot was firm and even.  No more ducking under low hanging limbs through the maze of small trees or hiking on ankle-turning river rock. 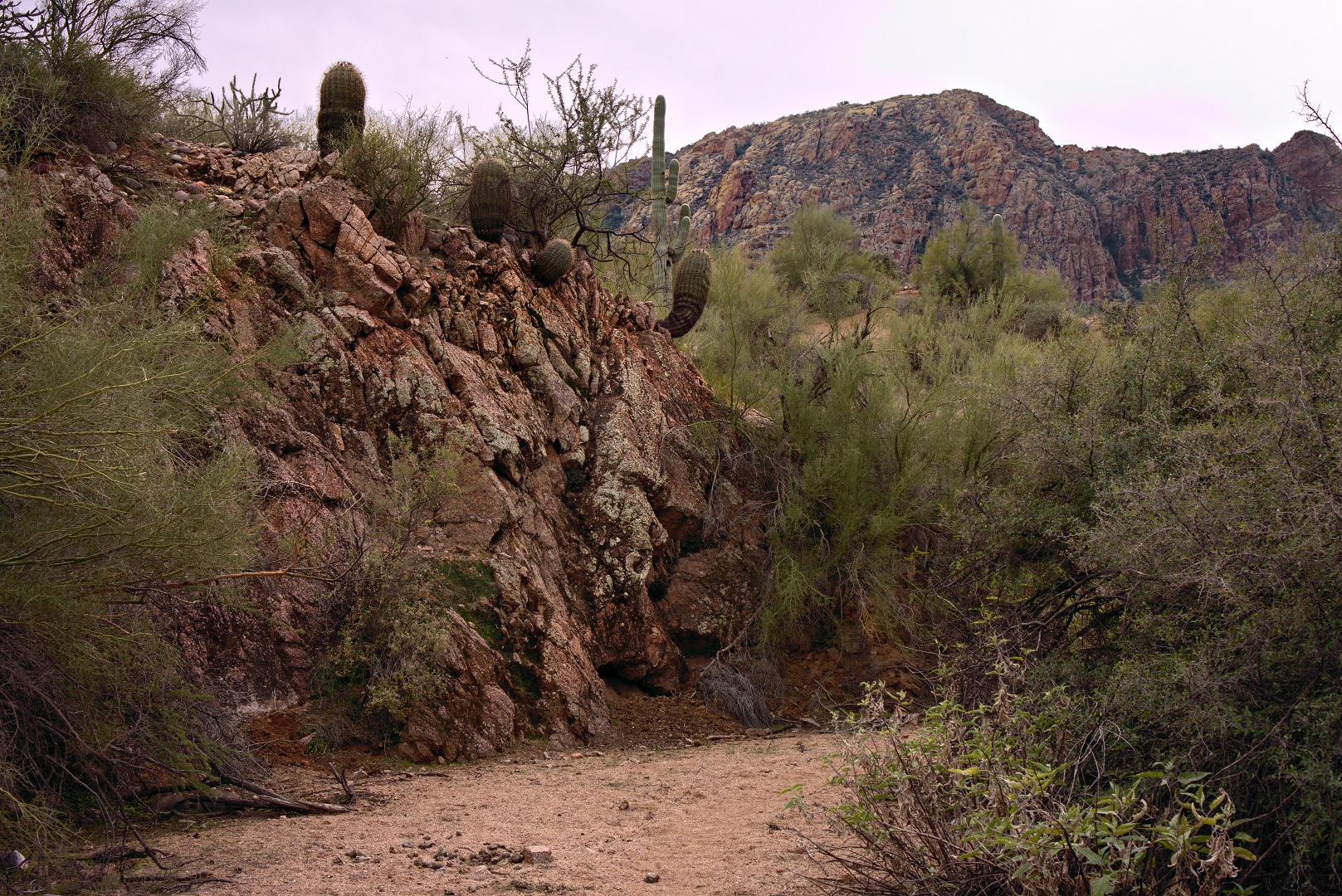 Marilyn stops to take her own photos in this wash: 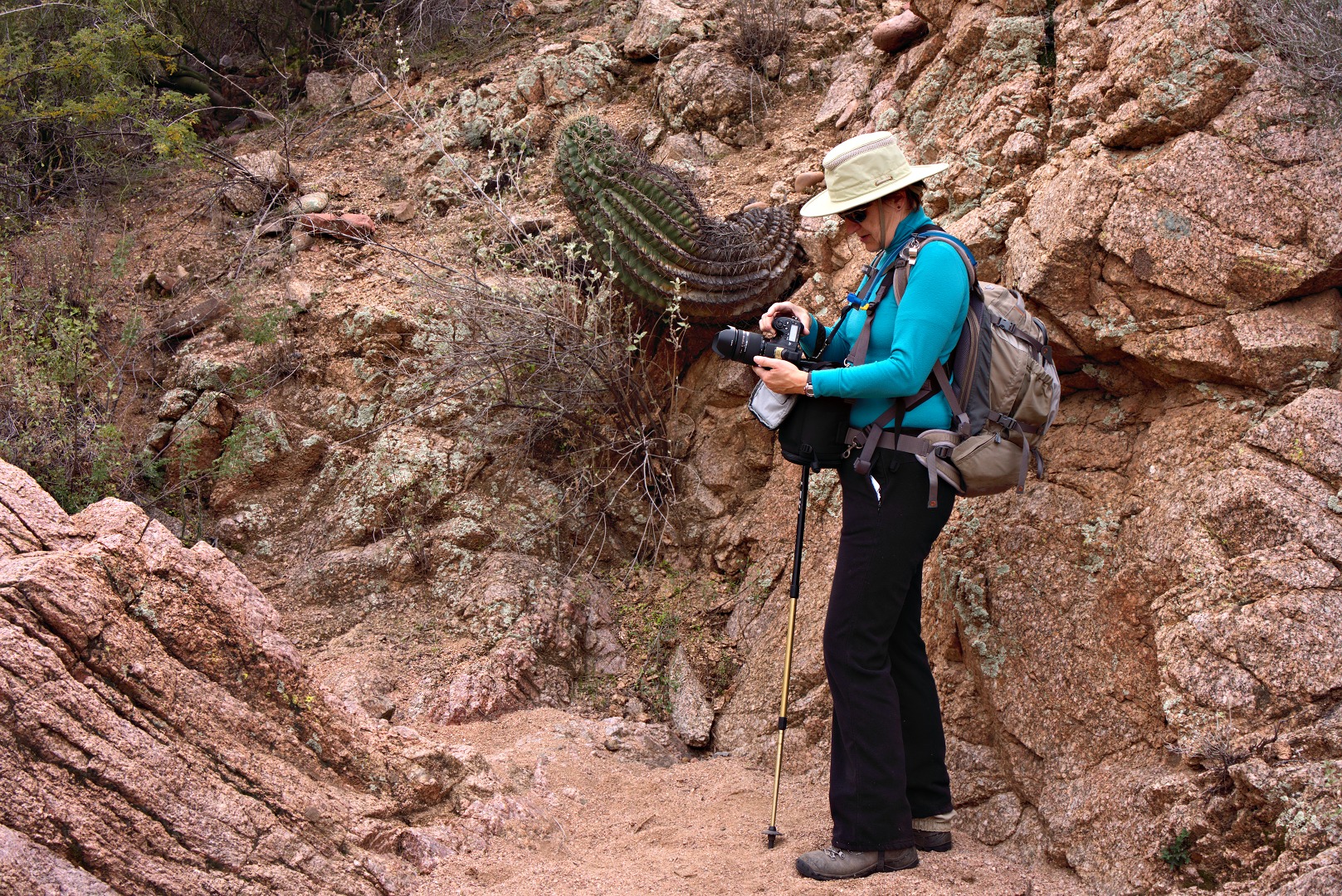 A view of the canyon where the majority of the elevation gain occurs.  There is a trail (not visible in the photo below) along the left canyon wall leading up to the top.  On the way up, we made the constant mistake of following right offshoots of the trail.  We’d proceed for a ways on what appeared to be a trail only to have it peter out.  We would then notice a good trail 10 or so feet higher up to our left. 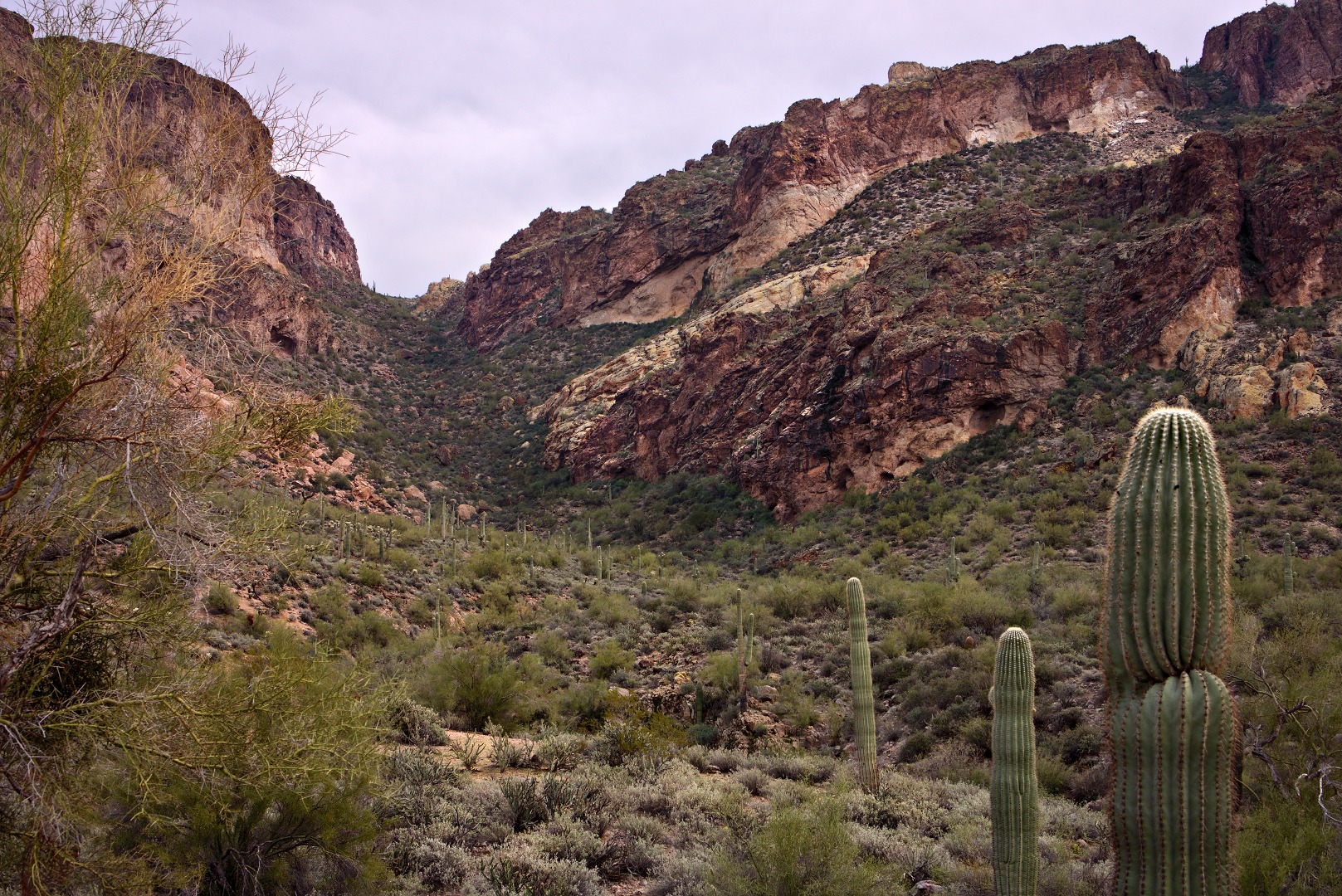 We saw several caves in the canyon walls on the way up. 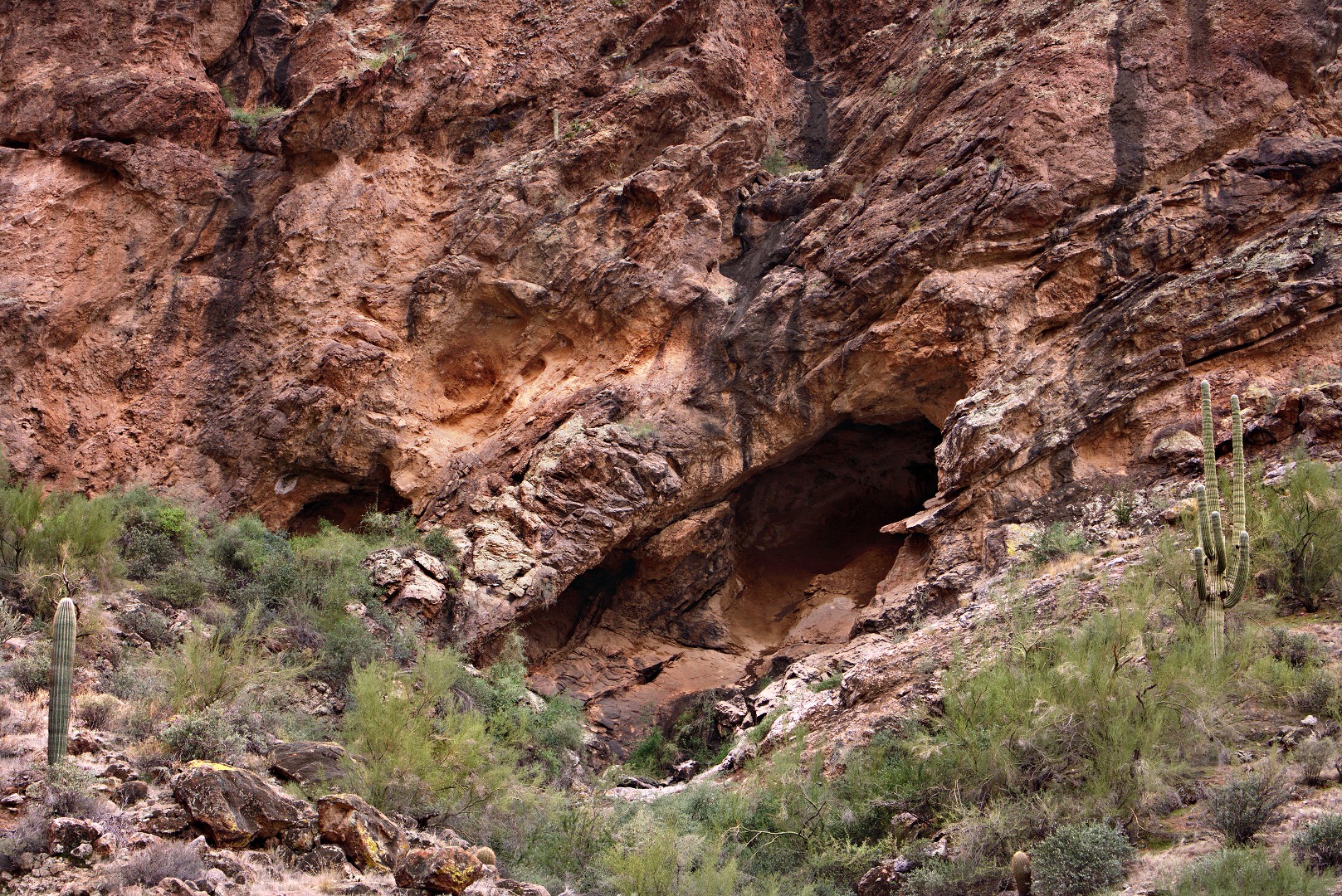 This fin on the canyon wall reminded us of some of the canyon country in Utah: 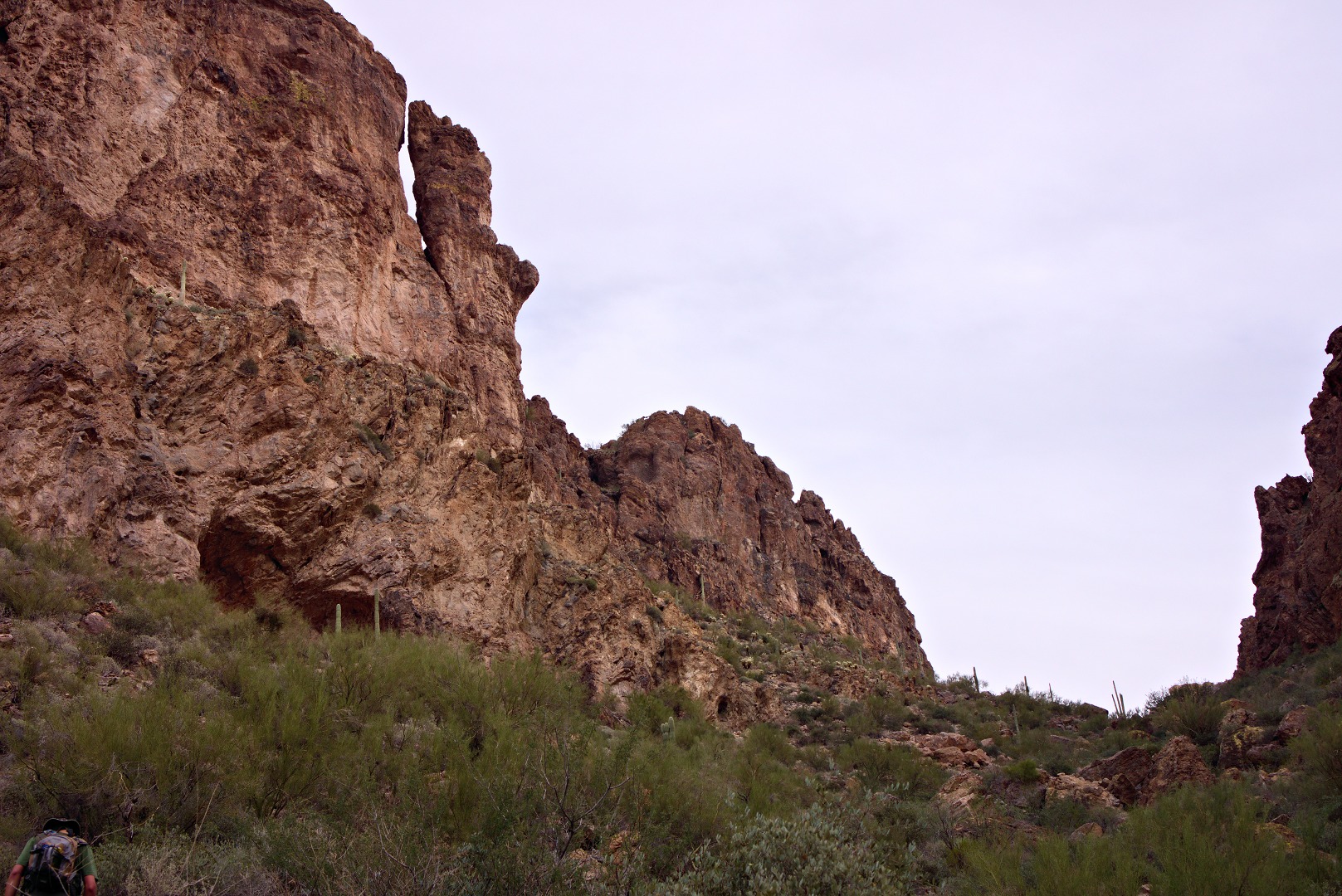 Joe pauses so that I can get a photo on the way up: 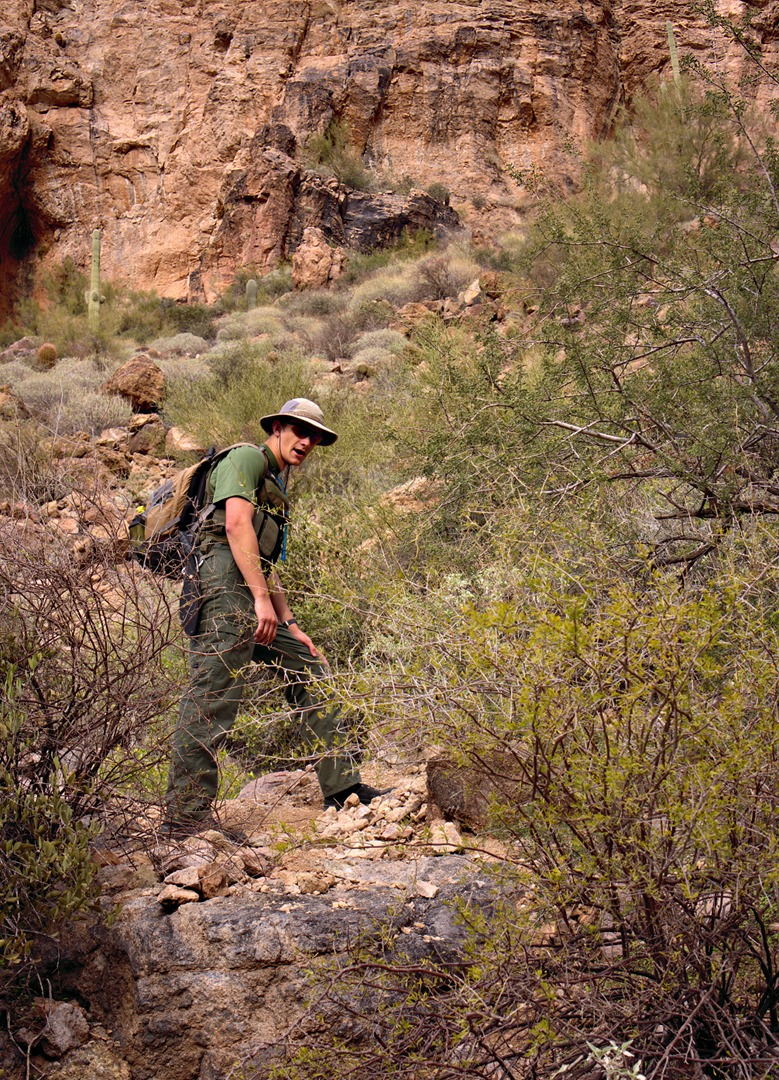 It was a cloudy day on Sunday.  The sun barely manages to peek through the clouds behind another wall that we saw after we emerged from the canyon. 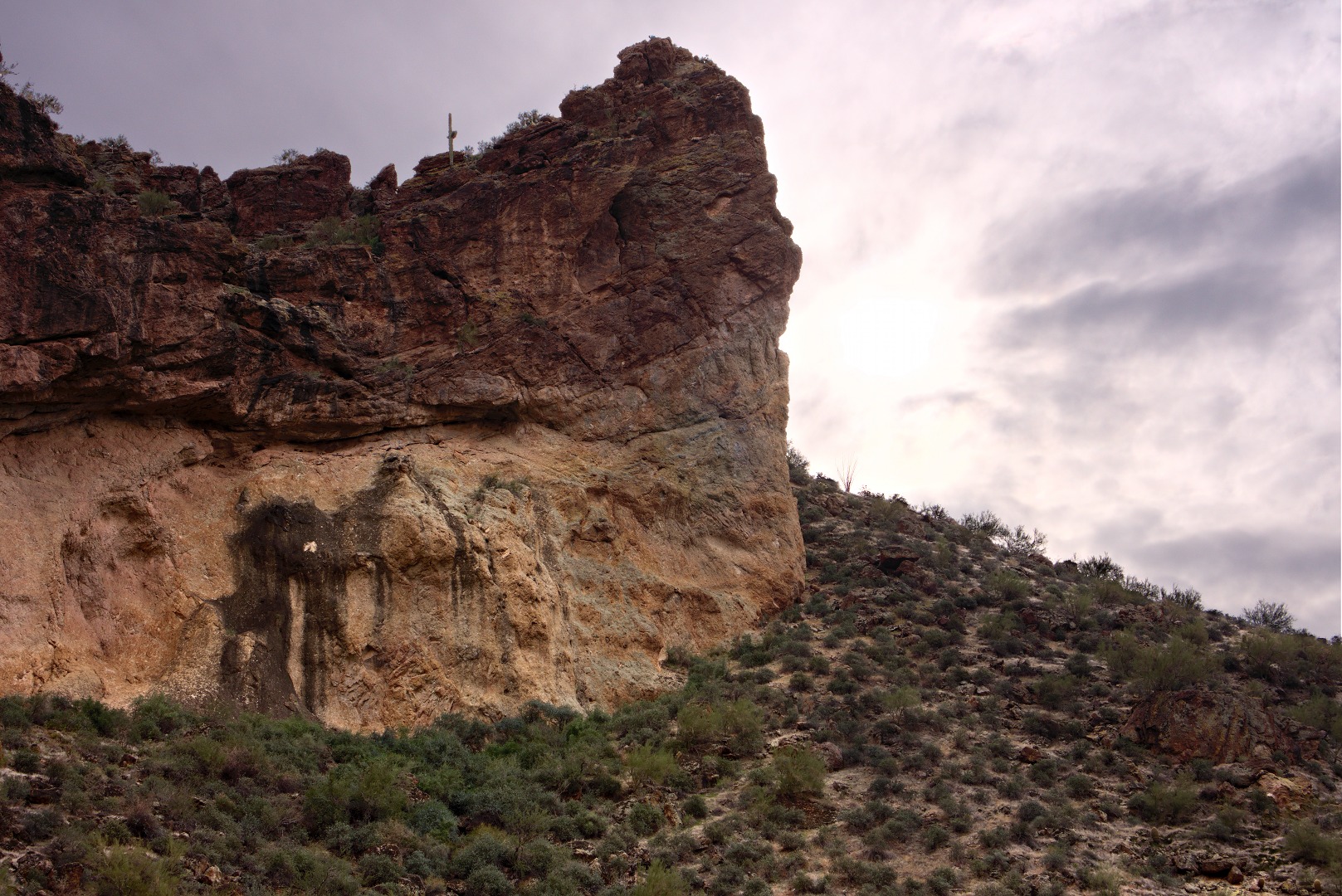 There appeared to be a trail to the southwest, but the GPS track lead us in the opposite direction.  We didn’t understand the point of the path until we hit the end of the track where we saw this small arch.  Red Mountain is visible through this arch. 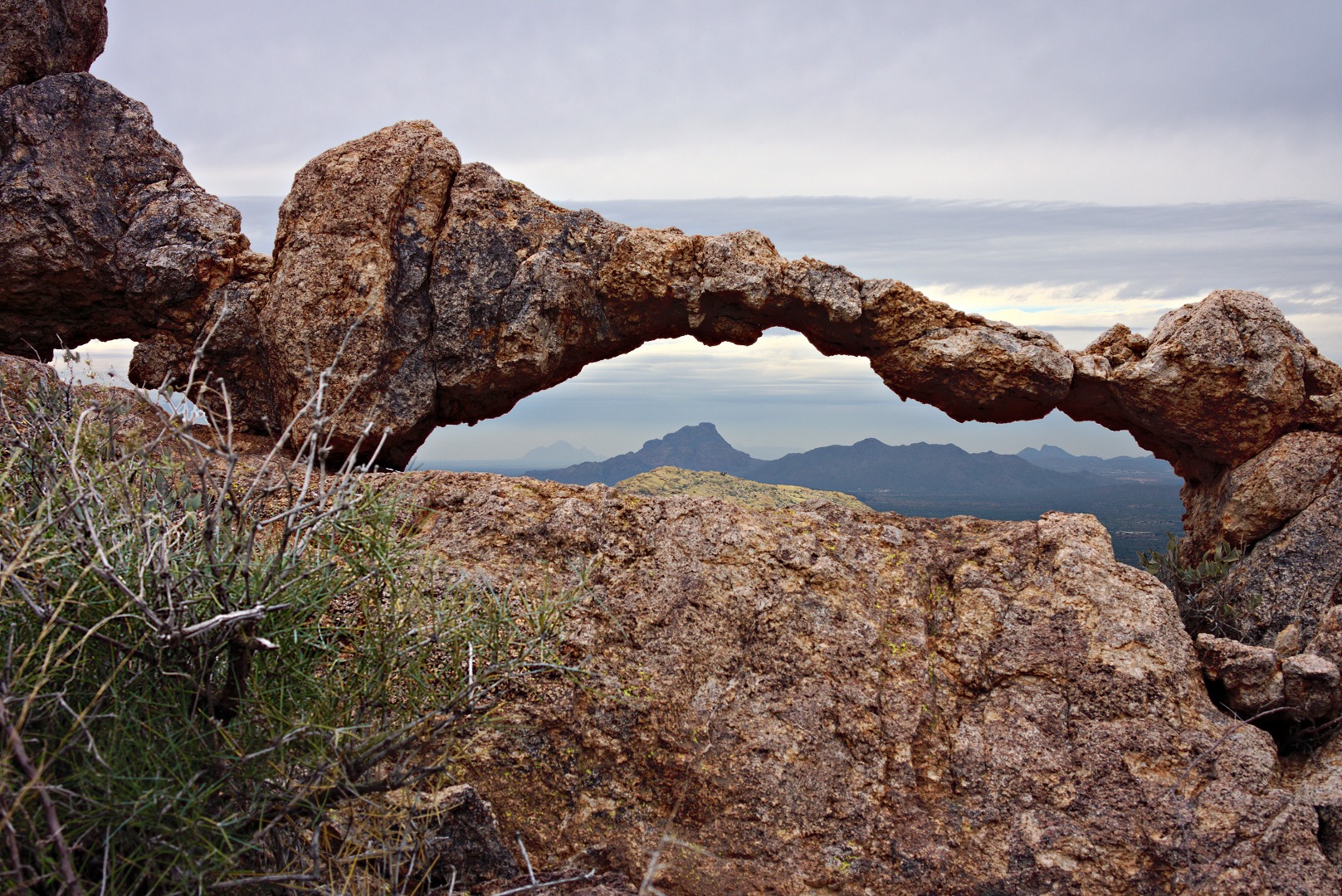 The arch isn’t very big.  In this photo, below, Nick pretends to sit on it.  It’s a fairly sheer drop on the other side of the arch; Nick didn’t trust it to hold his weight.  He didn’t want to damage it either. 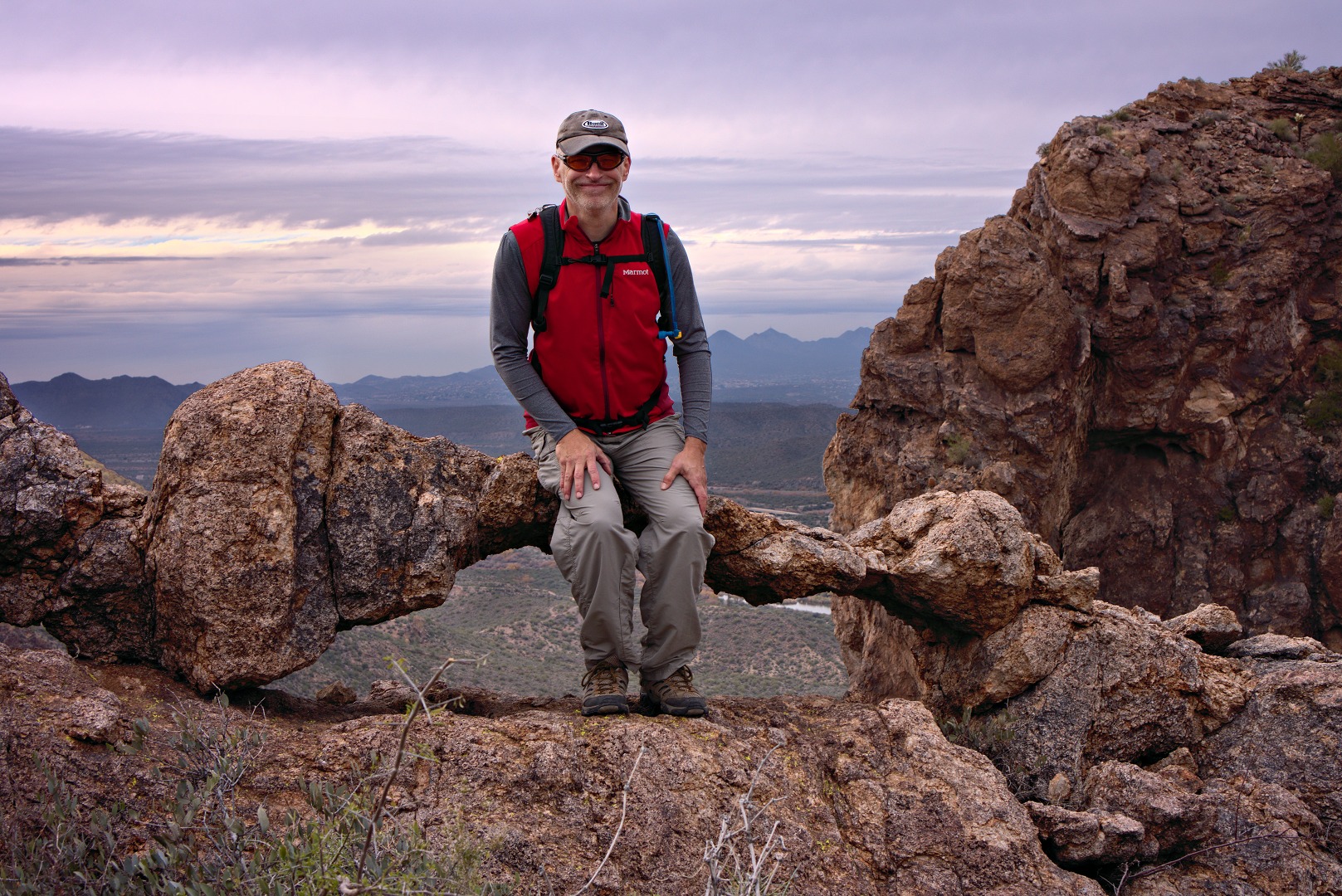 A view of some mountains in the distance as we were hiking down the canyon: 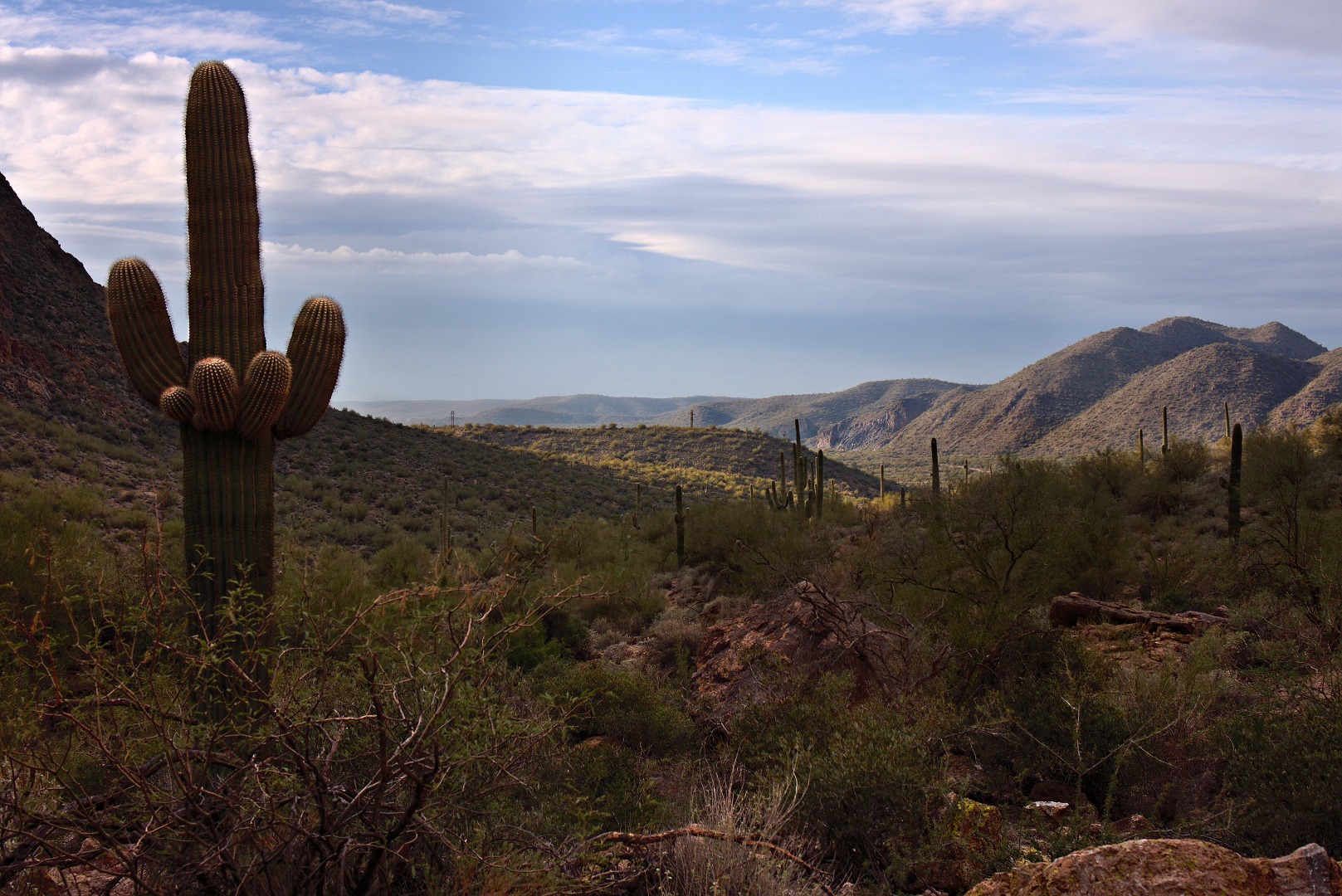 Looking up one of the canyon walls: 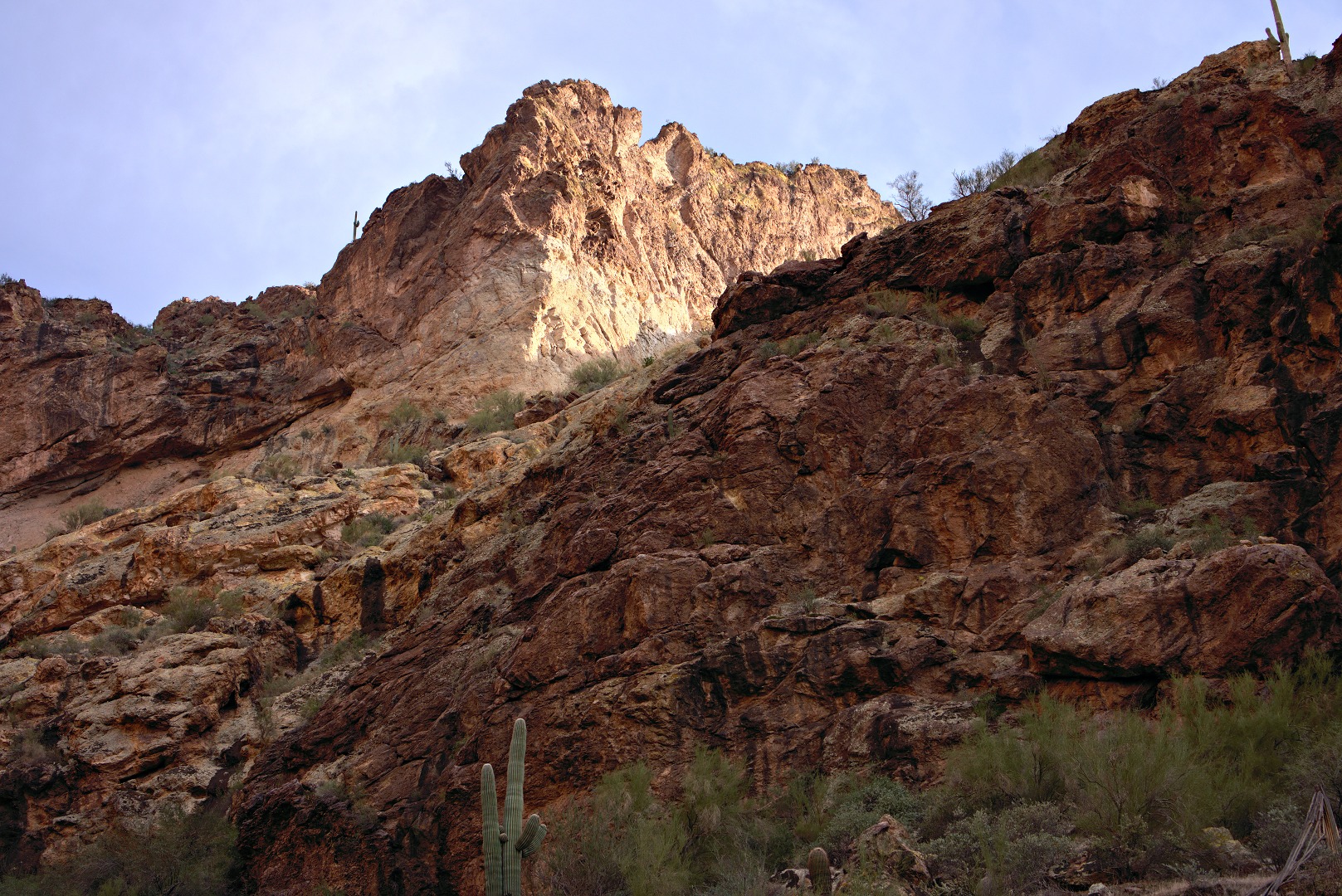 A look back at where we had been: 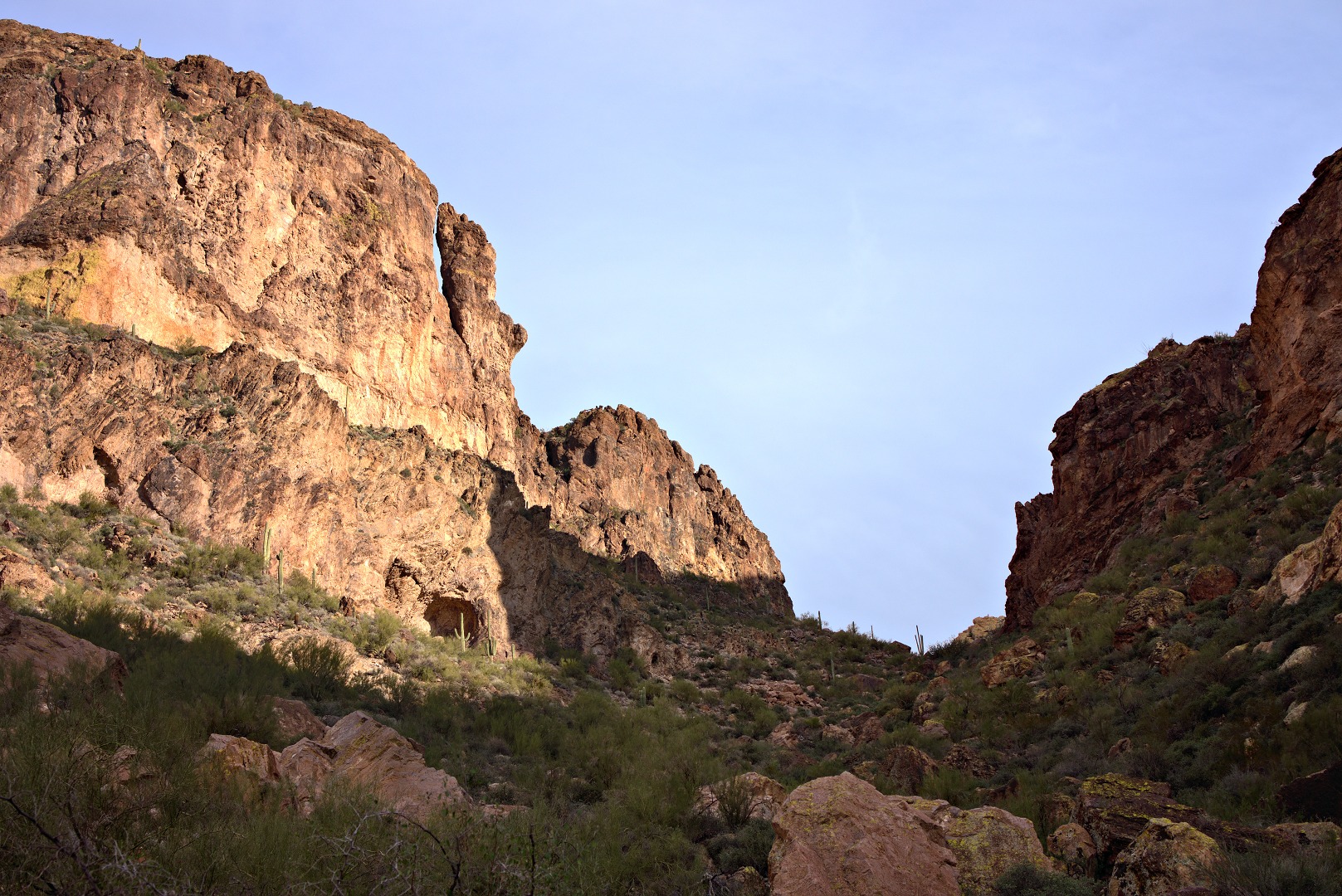 A 1:1 crop of the above image.  If you look carefully, you can see the small arch near the bottom right of the photo.  (You may need to zoom the photo on your viewing device.) 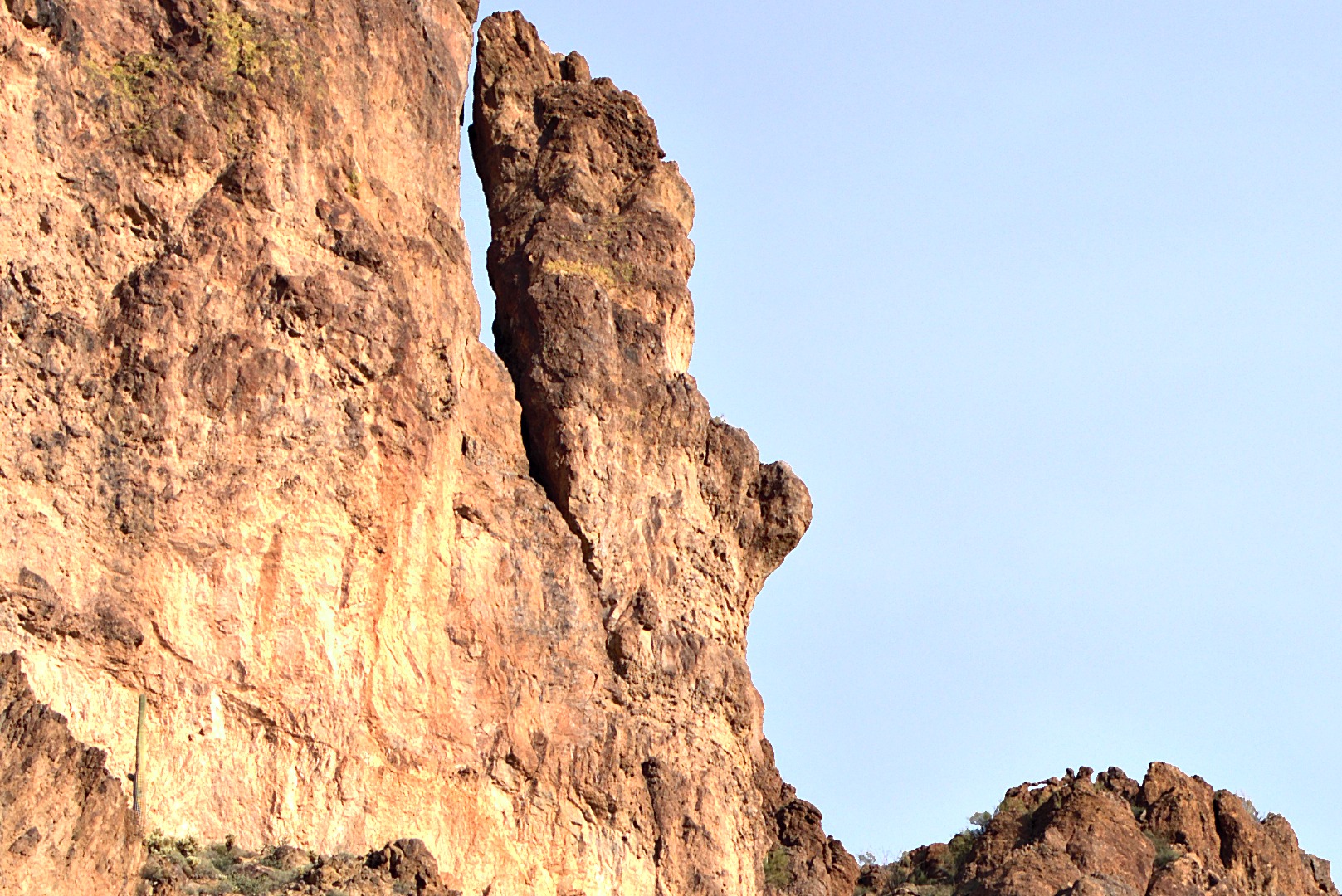 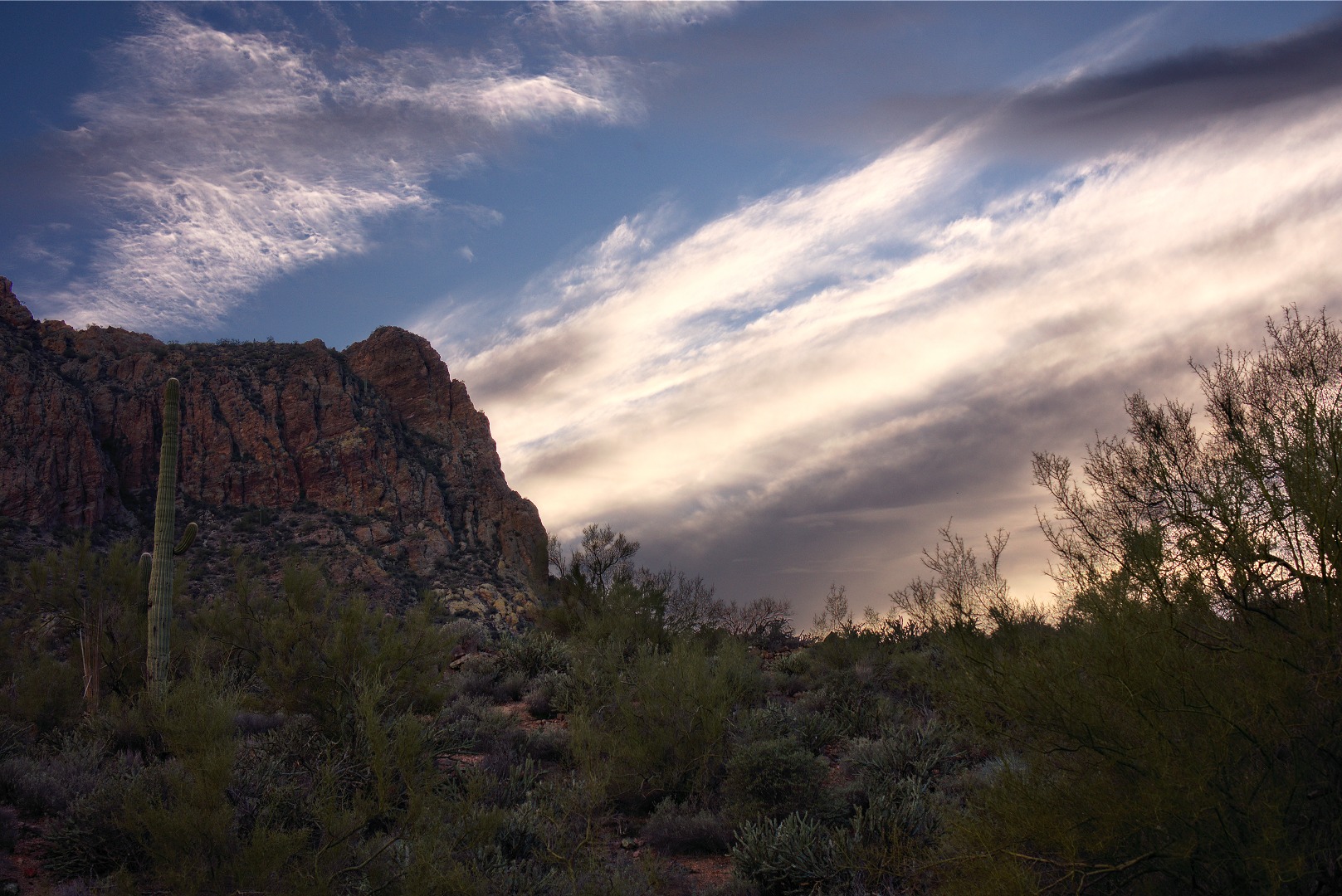 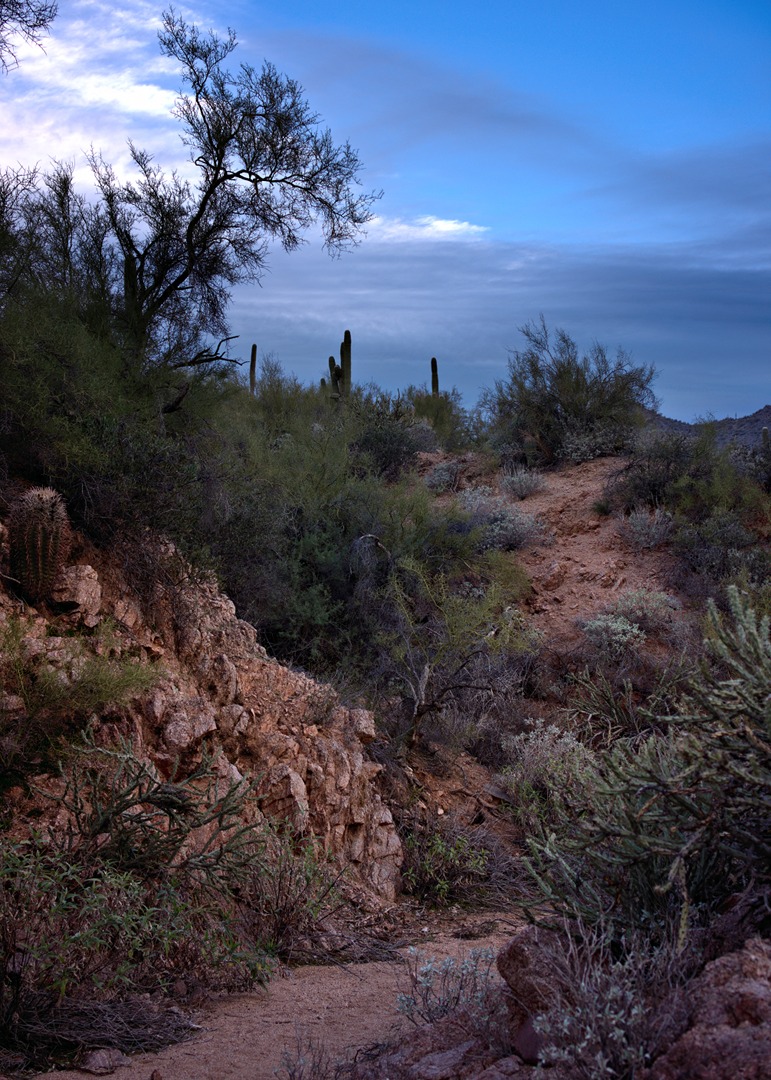 I got this photo of the river shortly after sunset.  It was getting fairly dark when I took this photo. 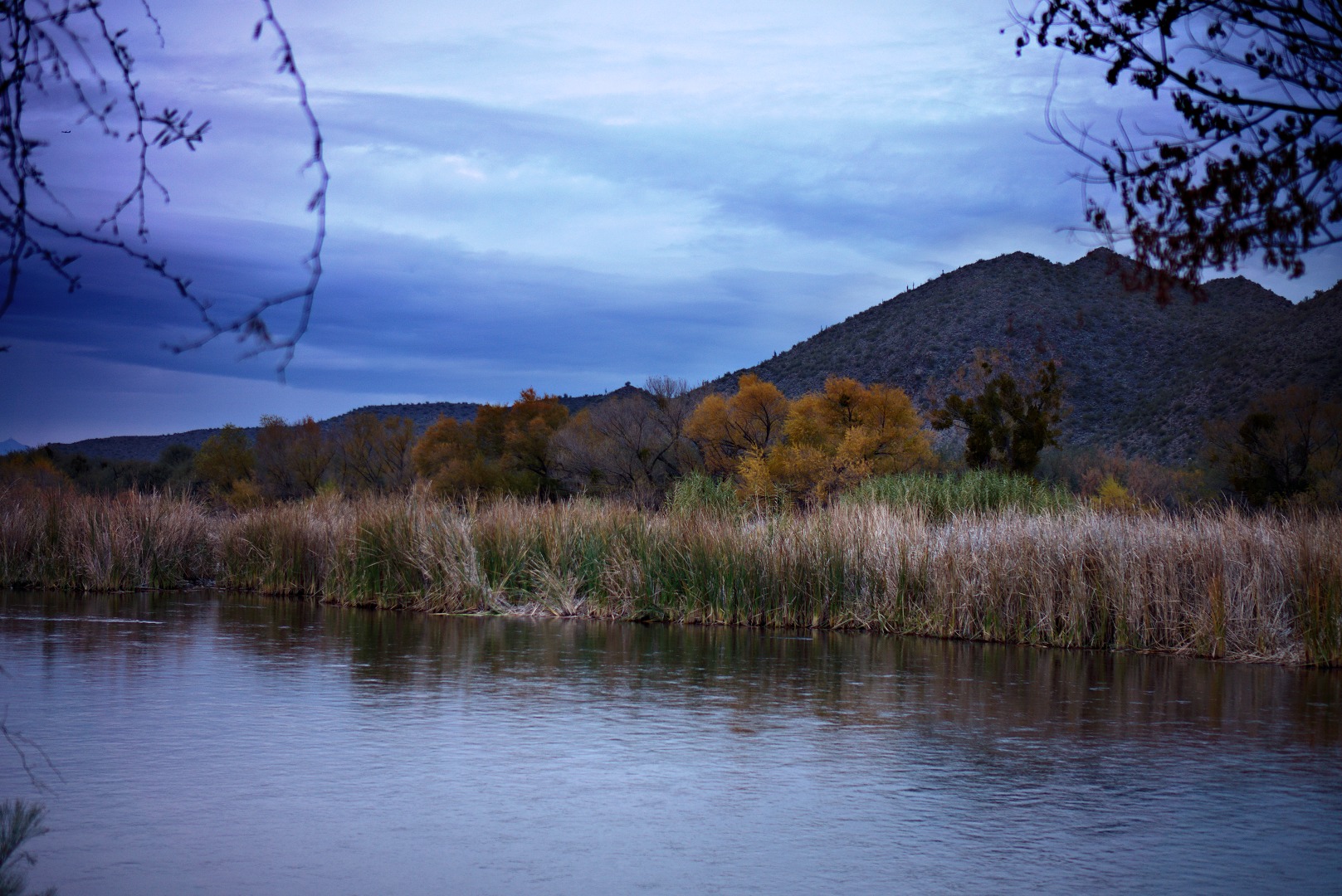