Bob, Janet, Allen, Nick, Linda, Marilyn, and I hiked the South Fork of Deer Creek on Sunday.  It had rained for on Thursday, Friday, and Saturday.  We saw on many of the mountaintops on the drive up.  Both forks of Deer Creek are often dry, but the South Fork was definitely not dry on Sunday.  Flowing water made hiking somewhat more difficult because the trail crosses the creek a number of times.  In dry conditions, it is possible to hike up the creek bed in many places.

Marilyn took these shots of snow in the mountains at the start of the hike: 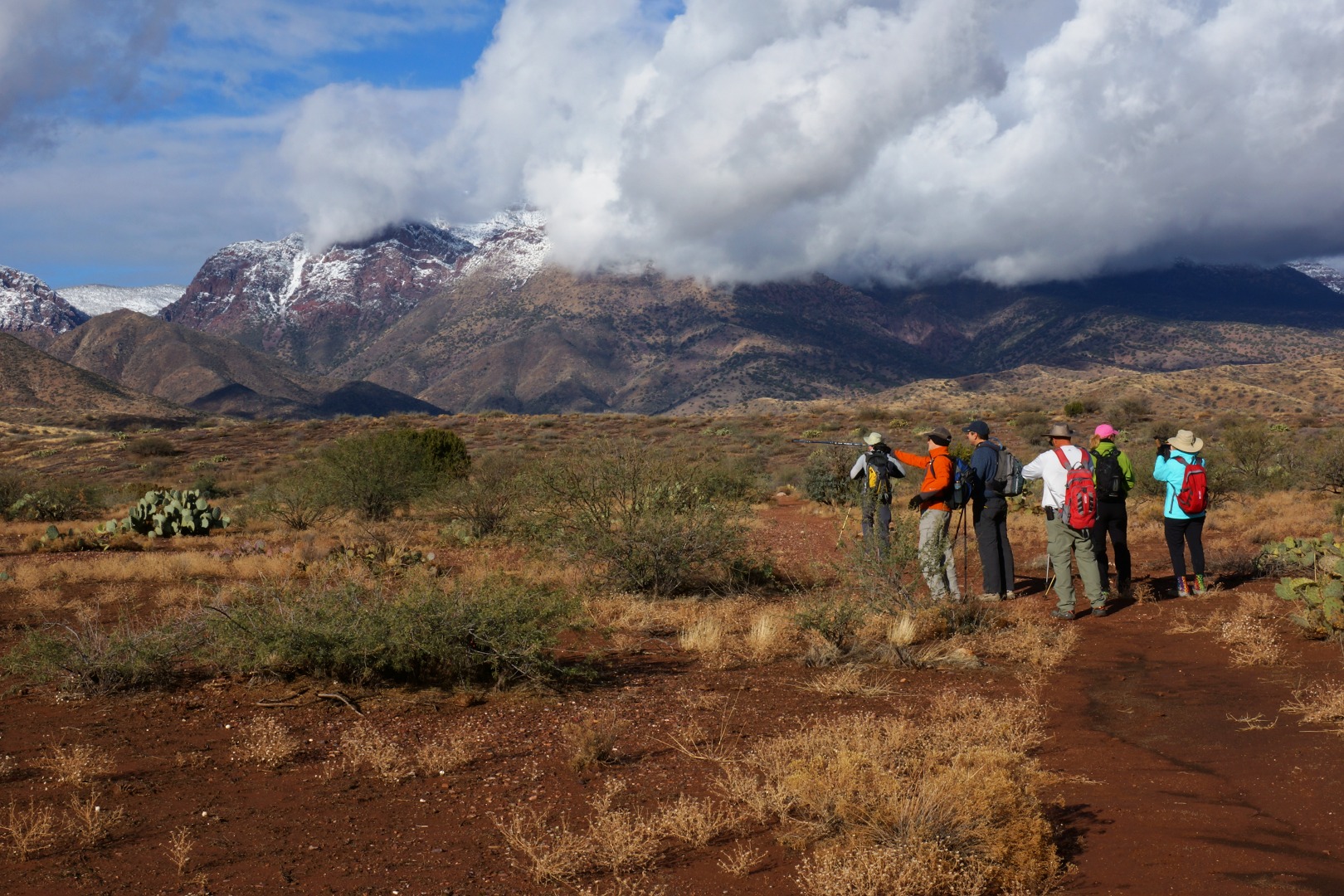 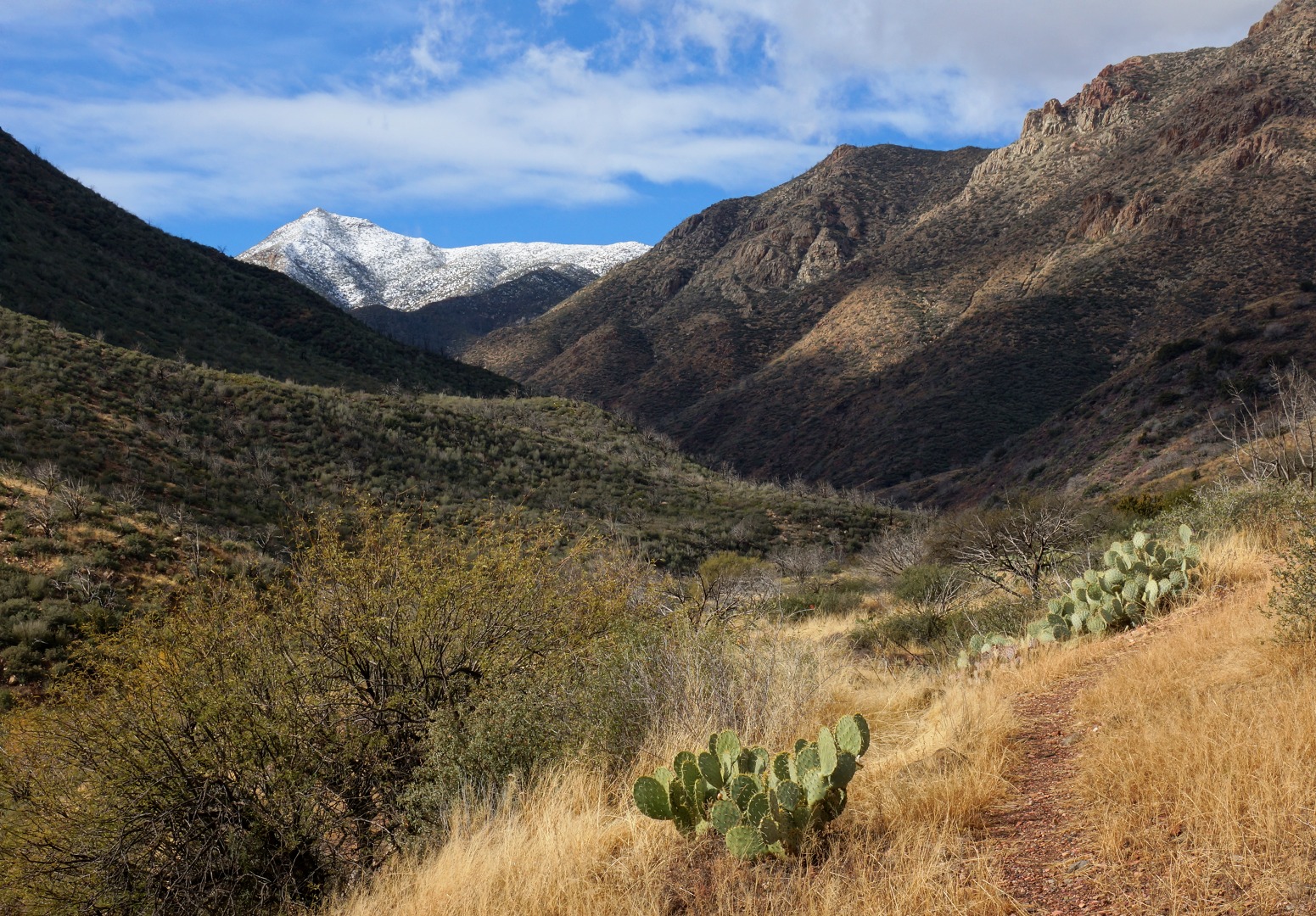 This photo, also from Marilyn, shows the wet and rocky conditions in the creek.  There were big rocks all the way up the creek.  We often stepped from rock to rock while fording the creek.  I was happy that I wore my Gortex lined boots. 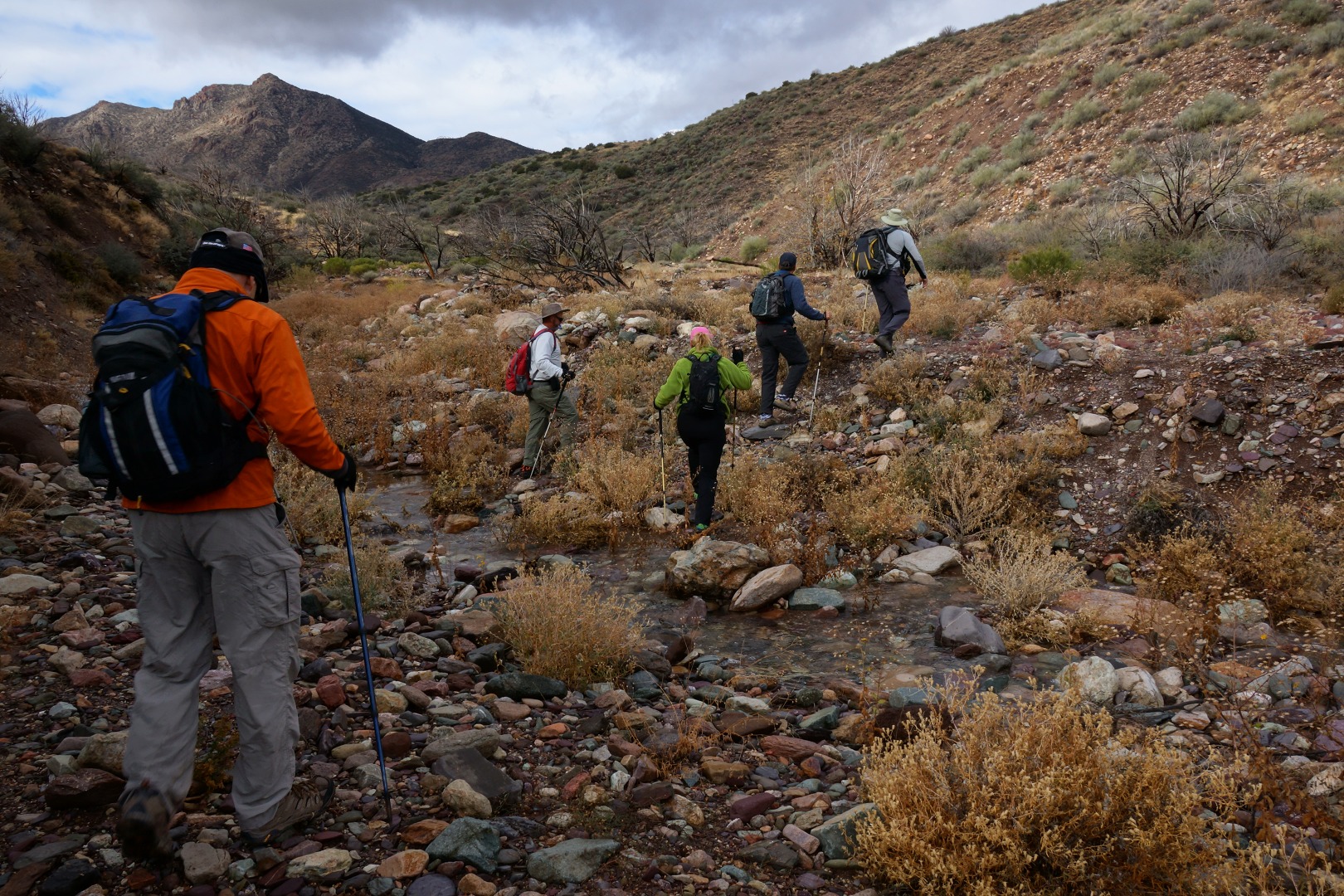 Another photo from Marilyn showing the running creek: 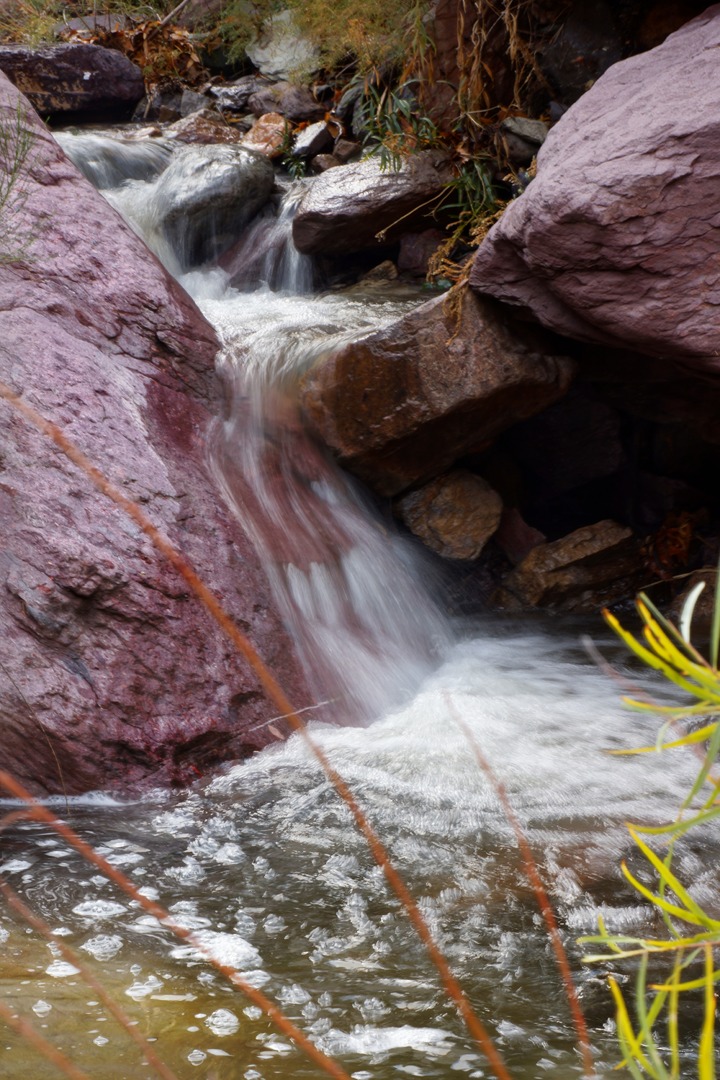 A dead tree that we saw along the way.  The Willow Fire ravaged the area in 2004.  The trail was obliterated as a result of erosion that occurred after the fire.  The trail was in good shape when we hiked it on Sunday though. 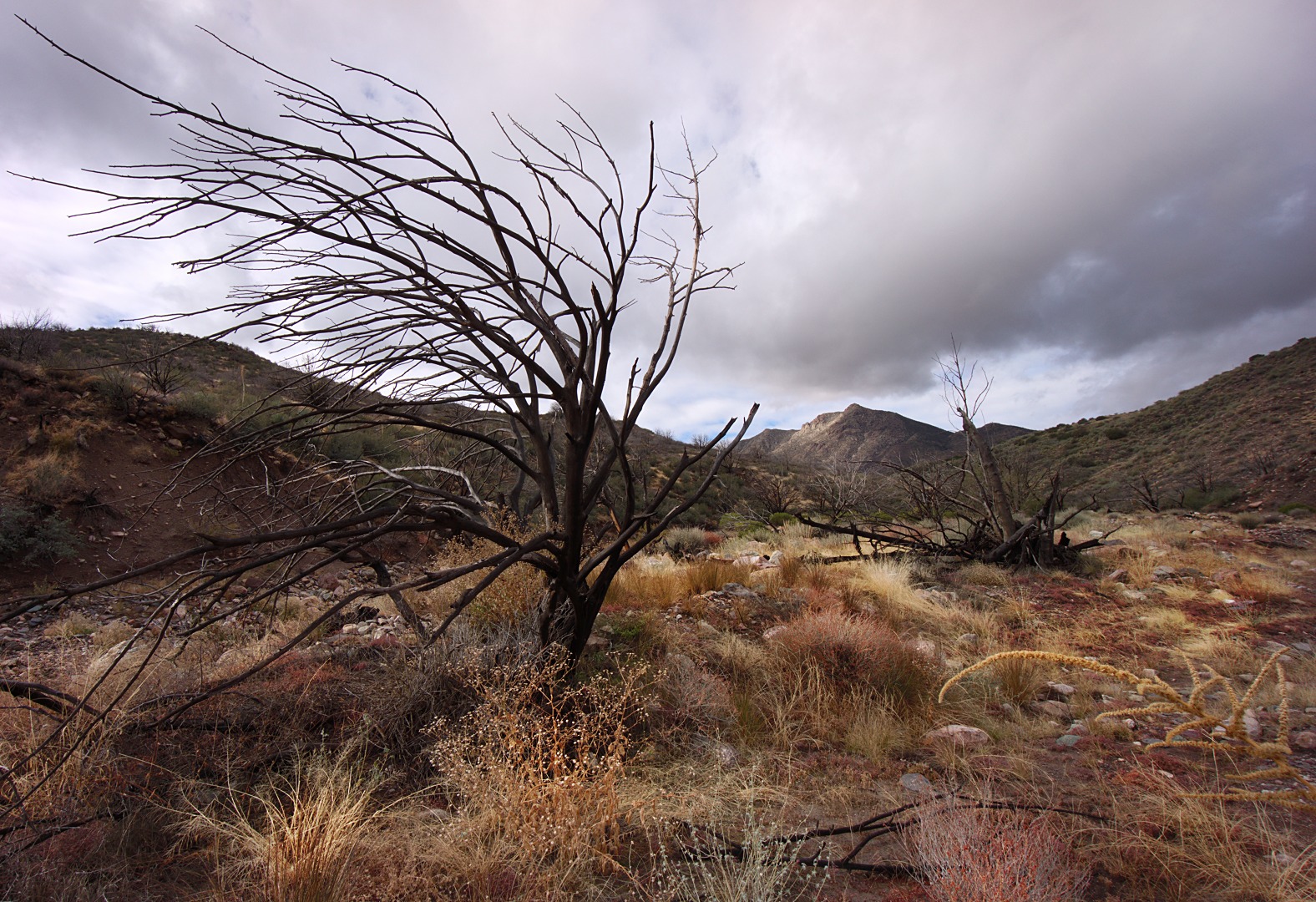 Another view of the trail before it dipped down and zig-zagged across the creek: 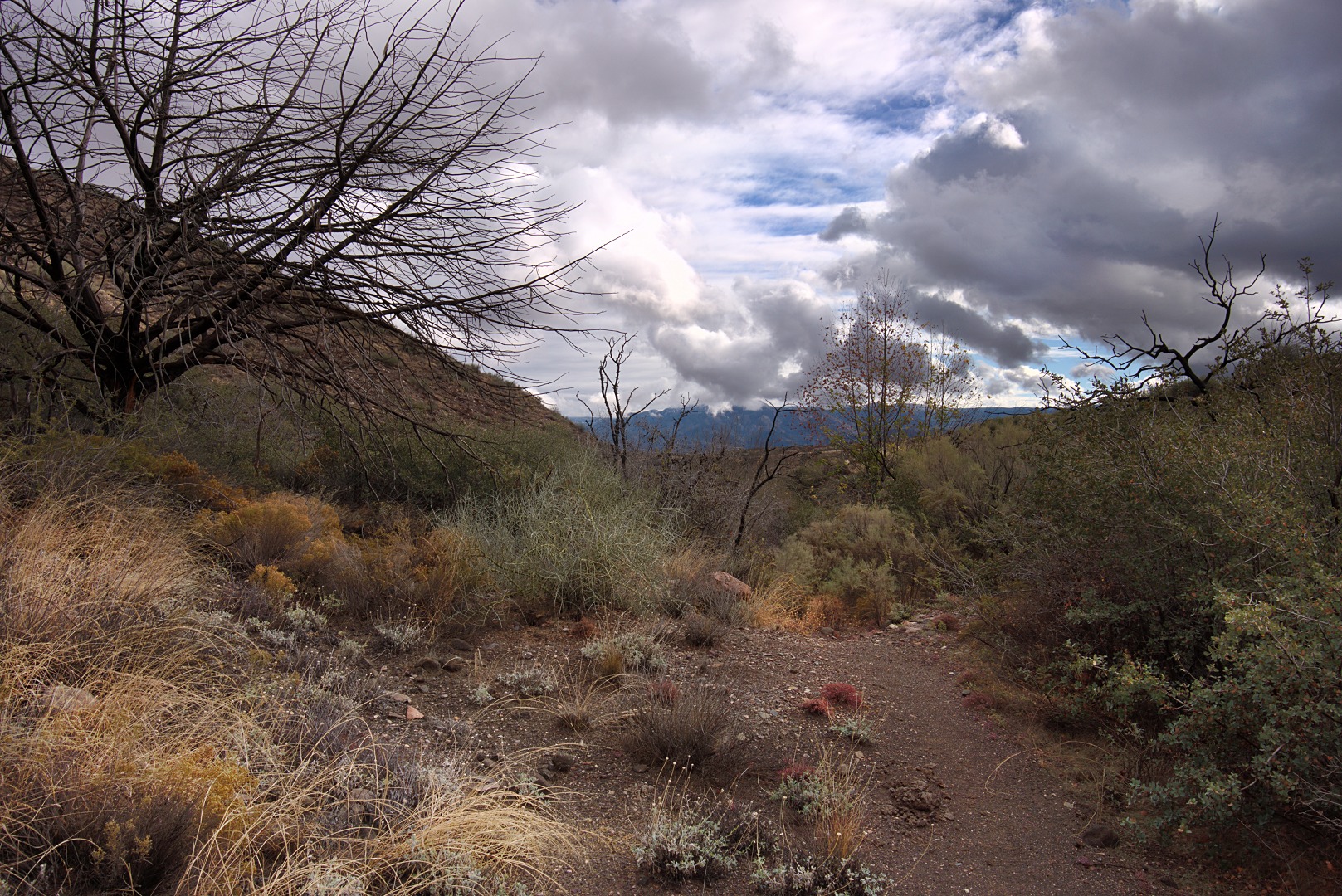 Another view of the creek.  In many places, the creek bed was lined with those big rocks.  I  had difficulty hiking on the uneven terrain. 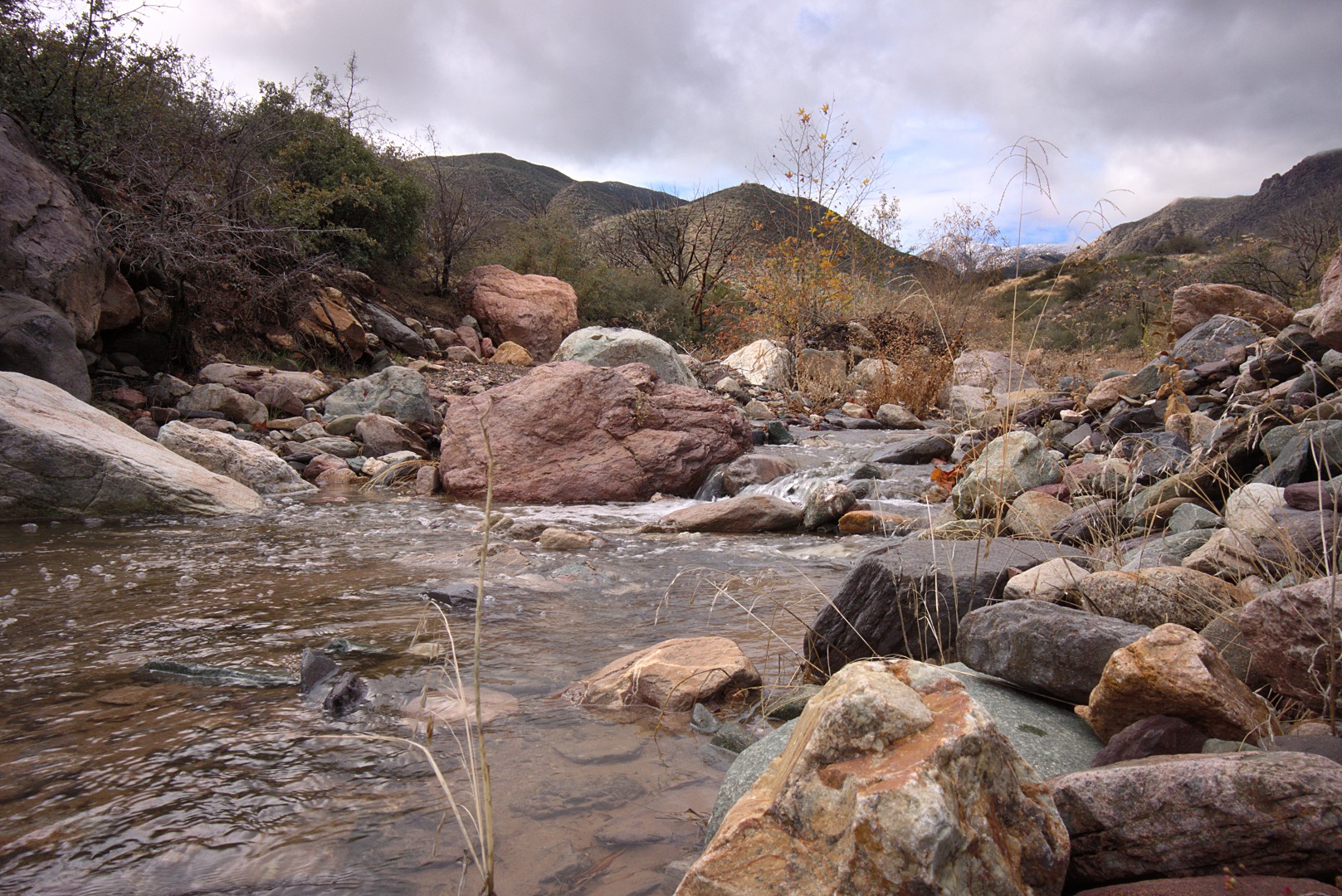 From time to time, the trail left the creek.  I was surprised to find this expanse of golden yellow grass. 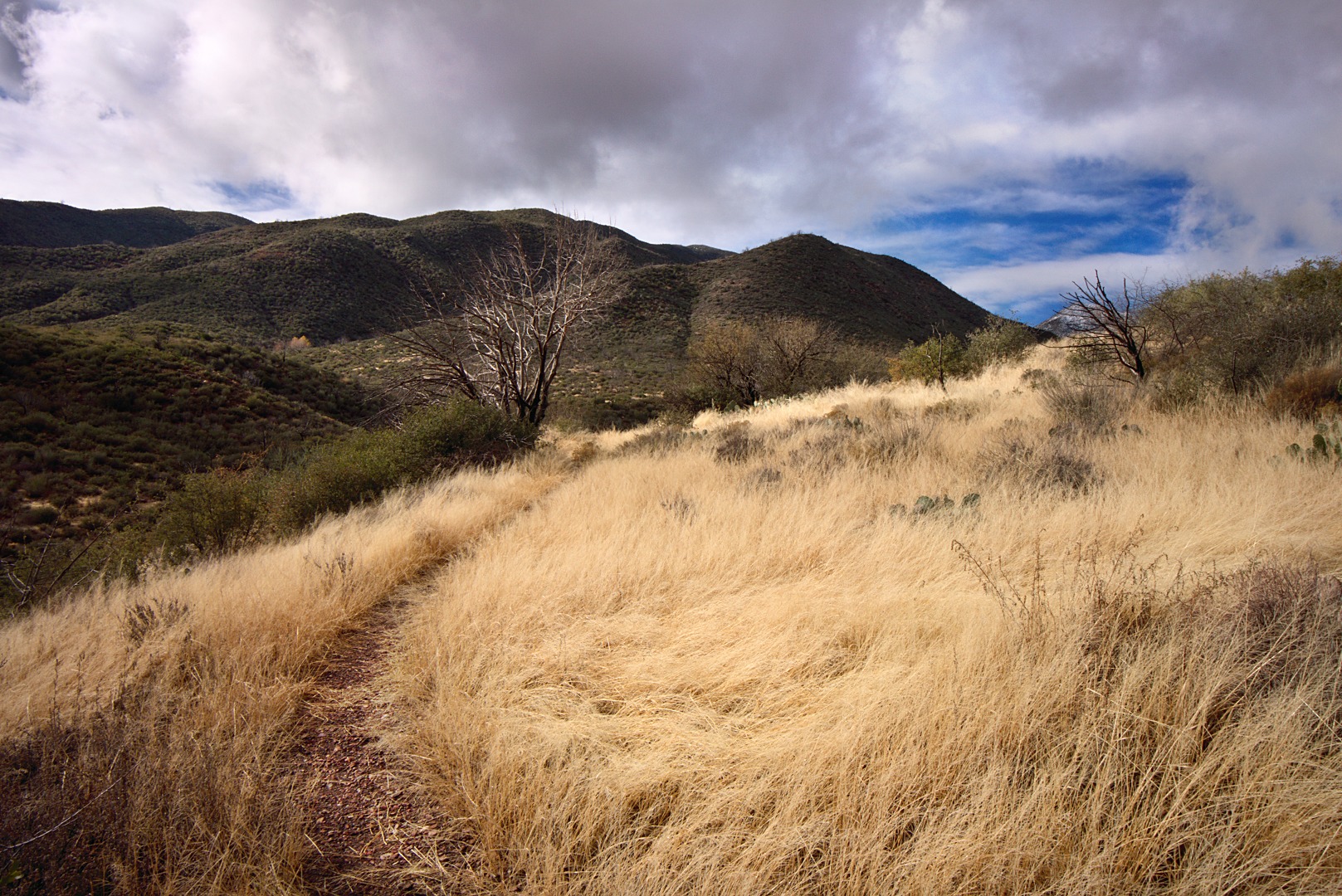 These red seed pods in front of another dead tree caught my eye. 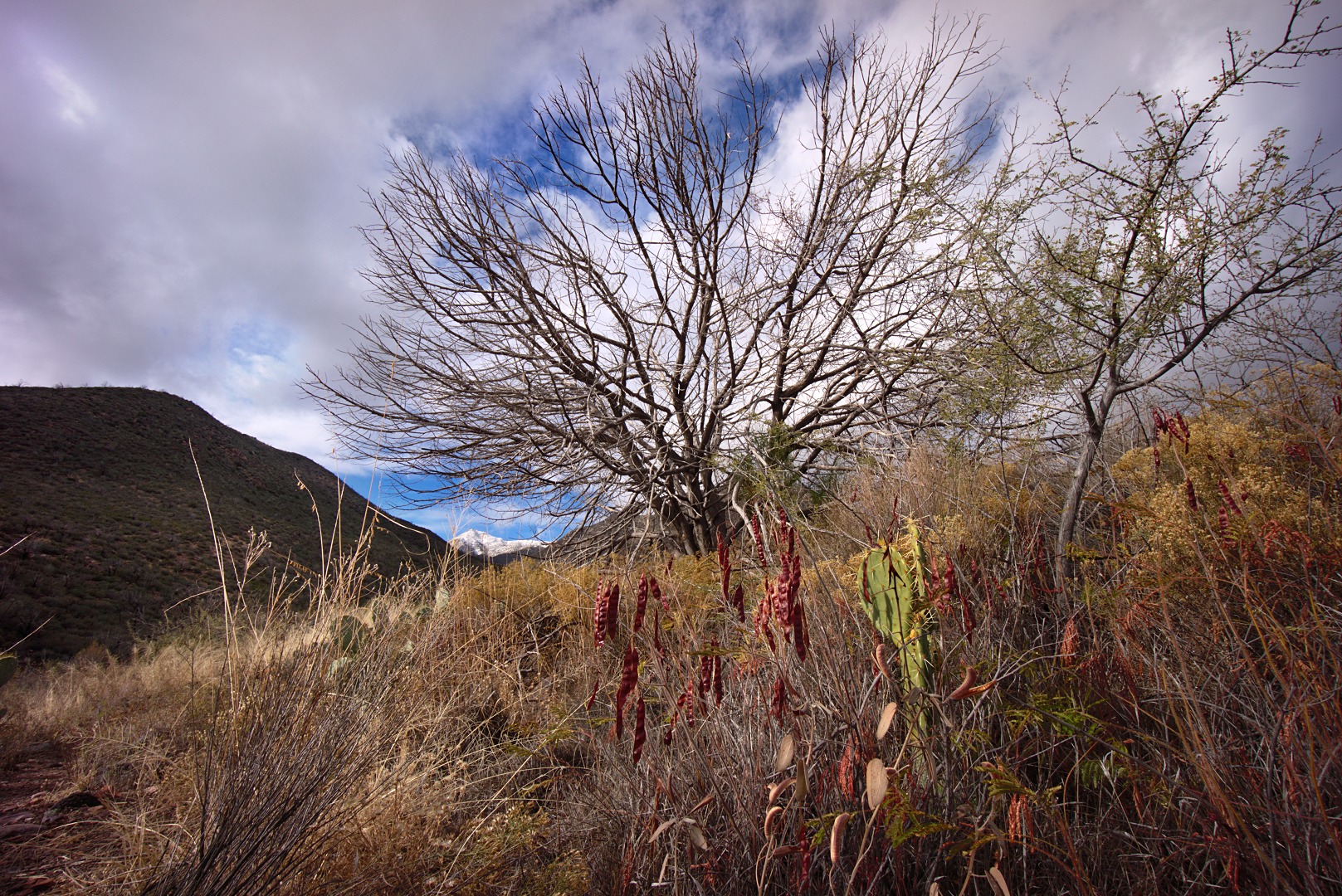 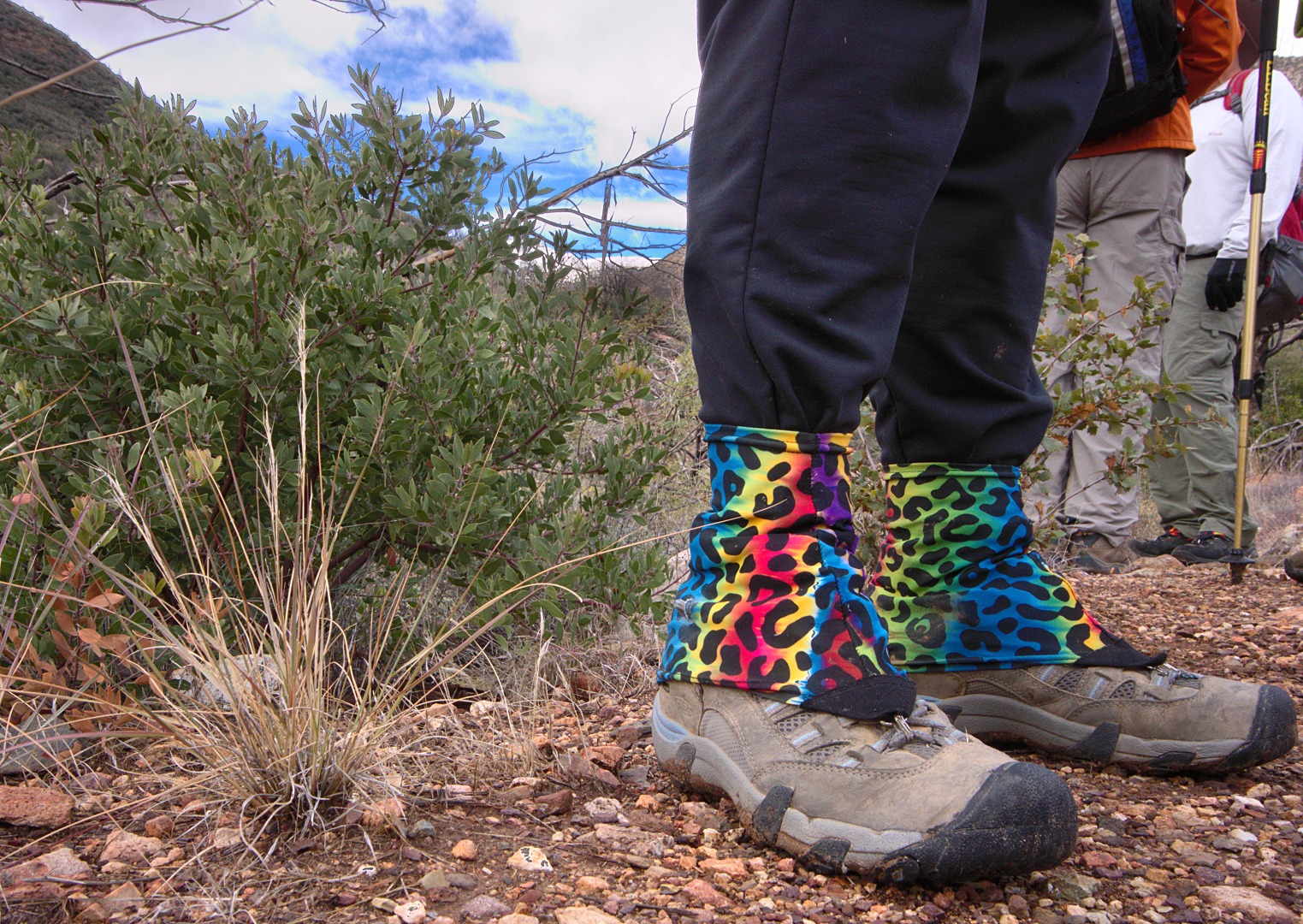 The white snow-capped peak in the photo below was visible for quite a long time as we hiked up the creek.  I thought it would continue to get larger and larger as we got closer.  It disappeared from view at some point though.  I don’t think we were able to see it again until we got far enough back on our return trip. 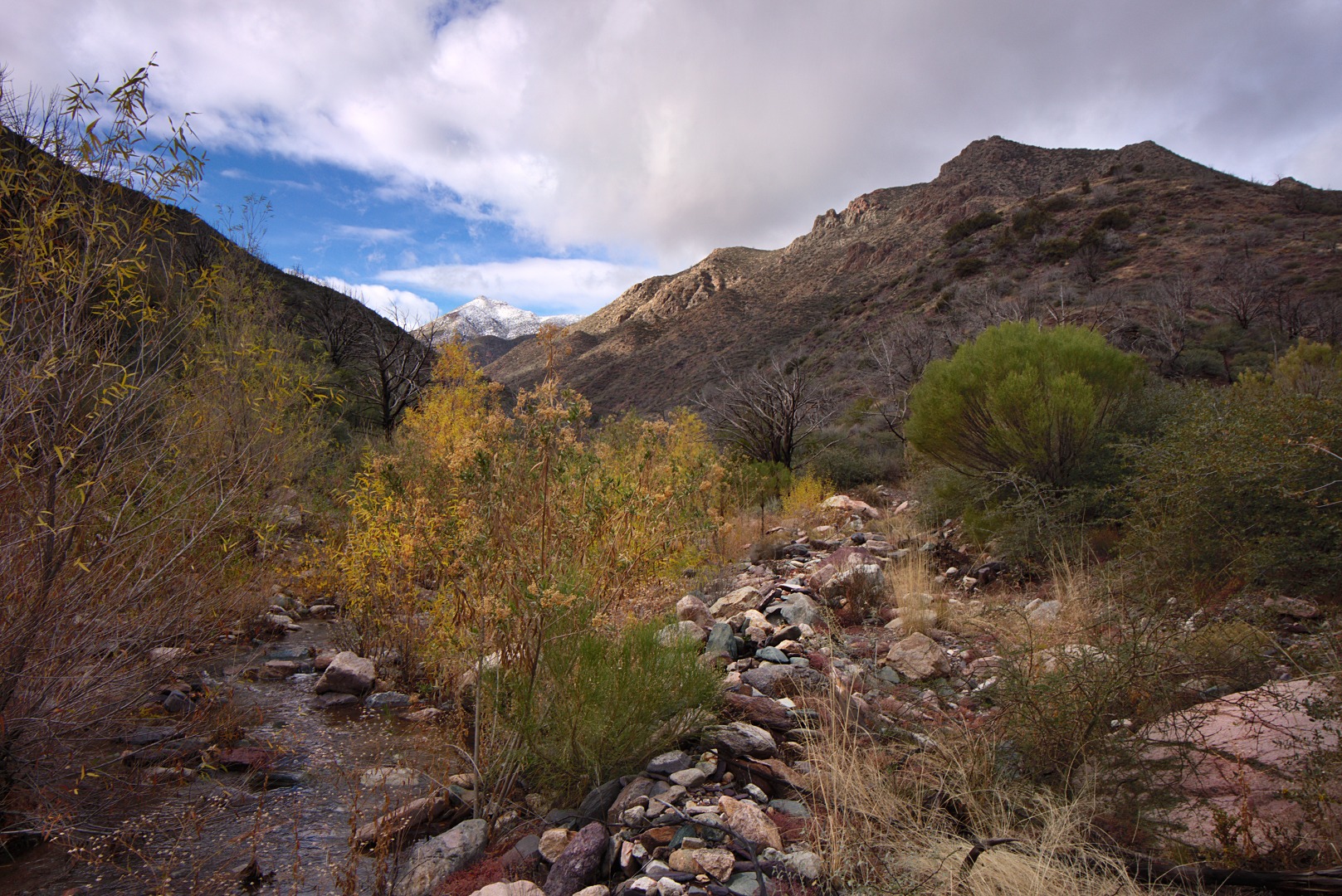 We saw several rapids, or perhaps miniature waterfalls, along the way. 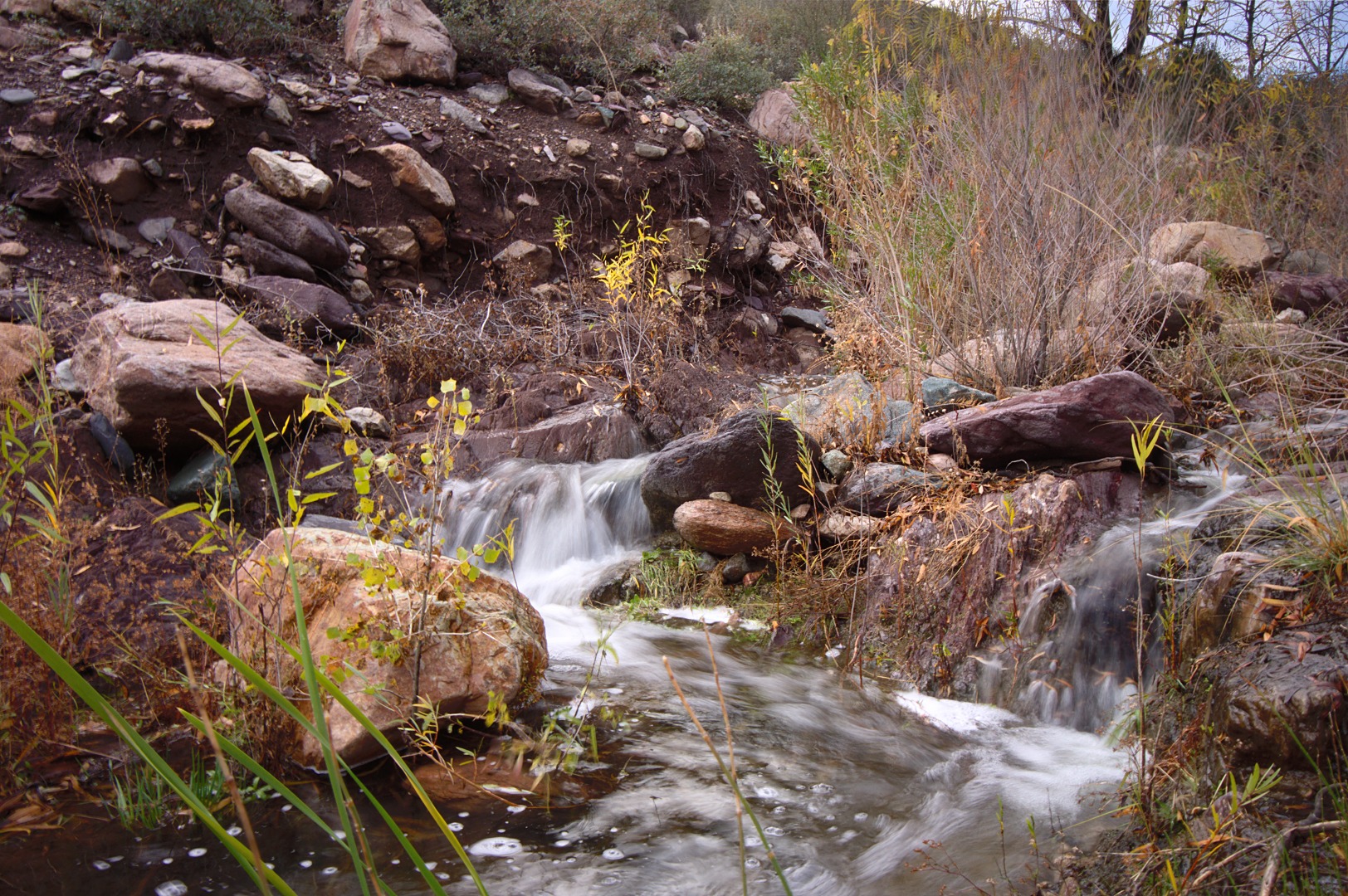 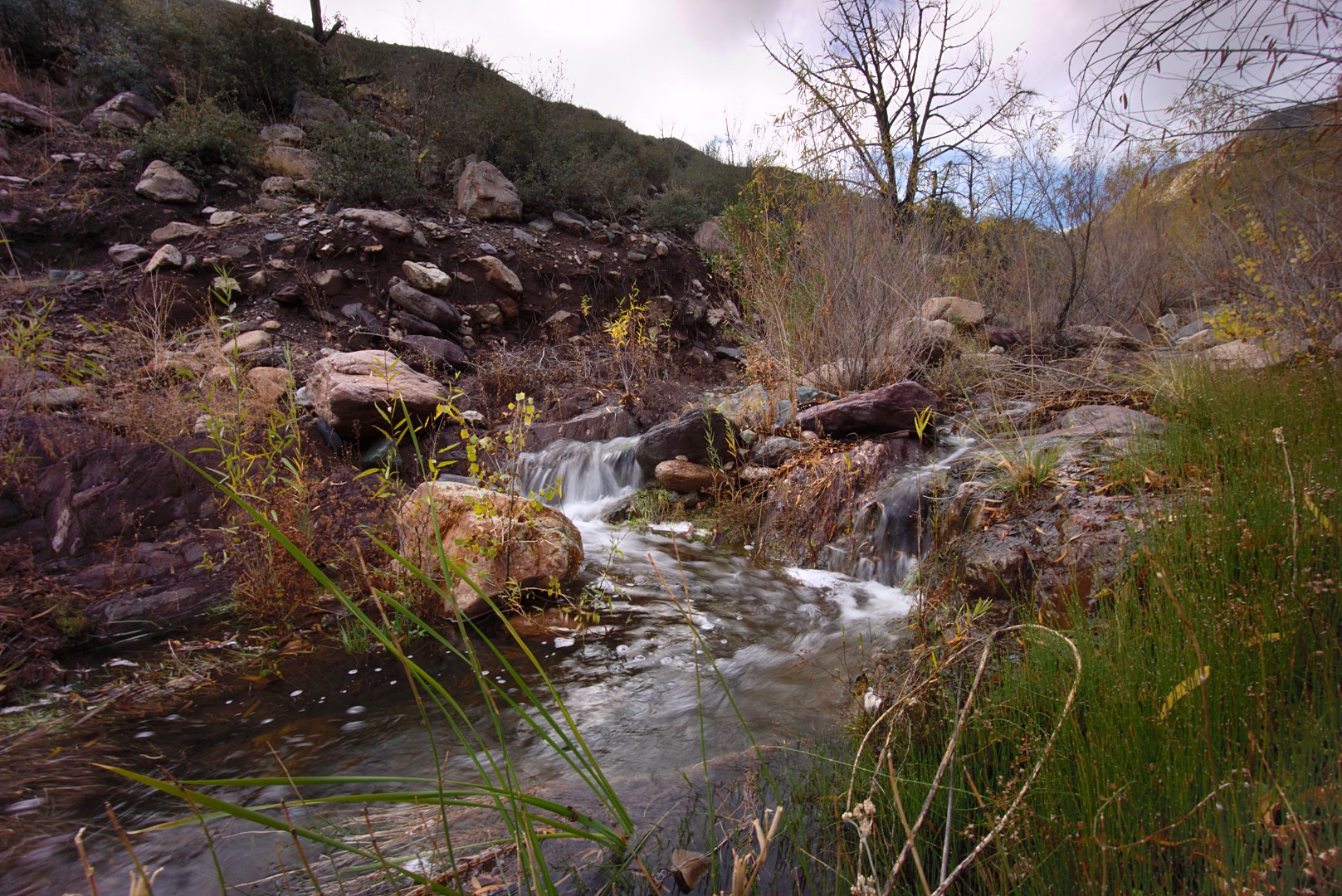 I almost passed this one by, but everyone else was photographing it, so I did too.  I’m happy I stopped because I like this shot. 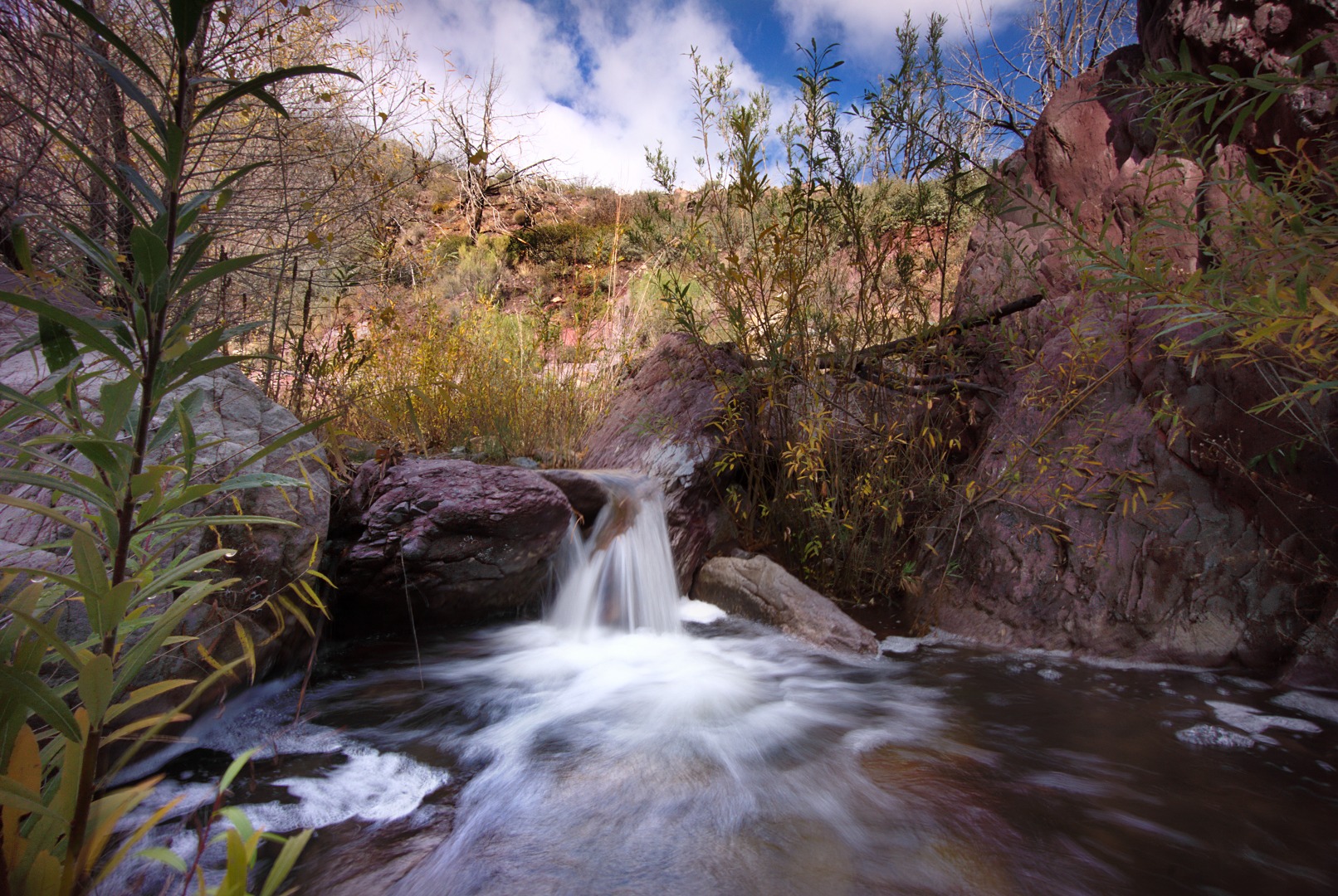 Linda hikes ahead of me, past a large red rock: 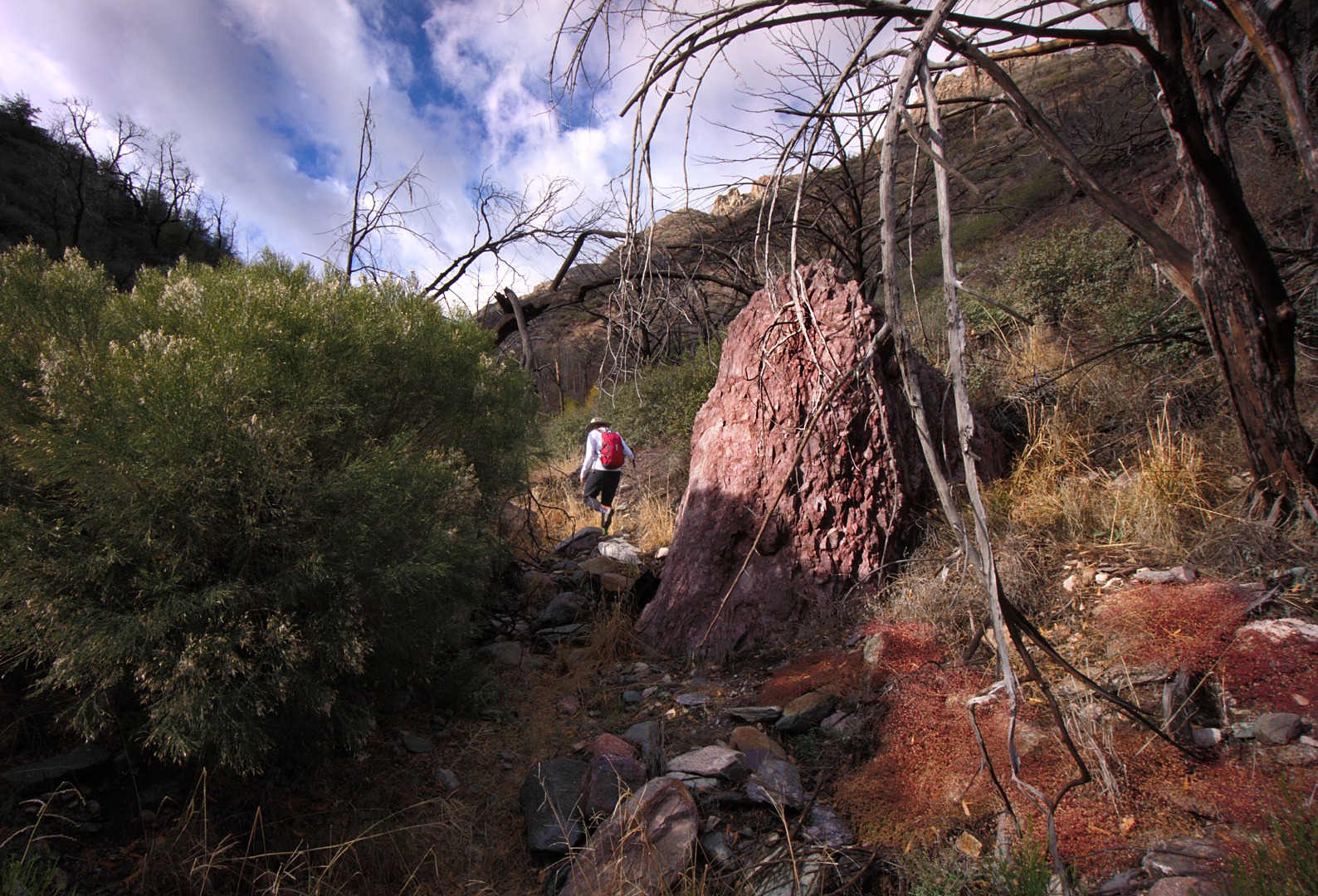 Janet, Linda, Marilyn, and Bob hike through one of many picturesque areas: 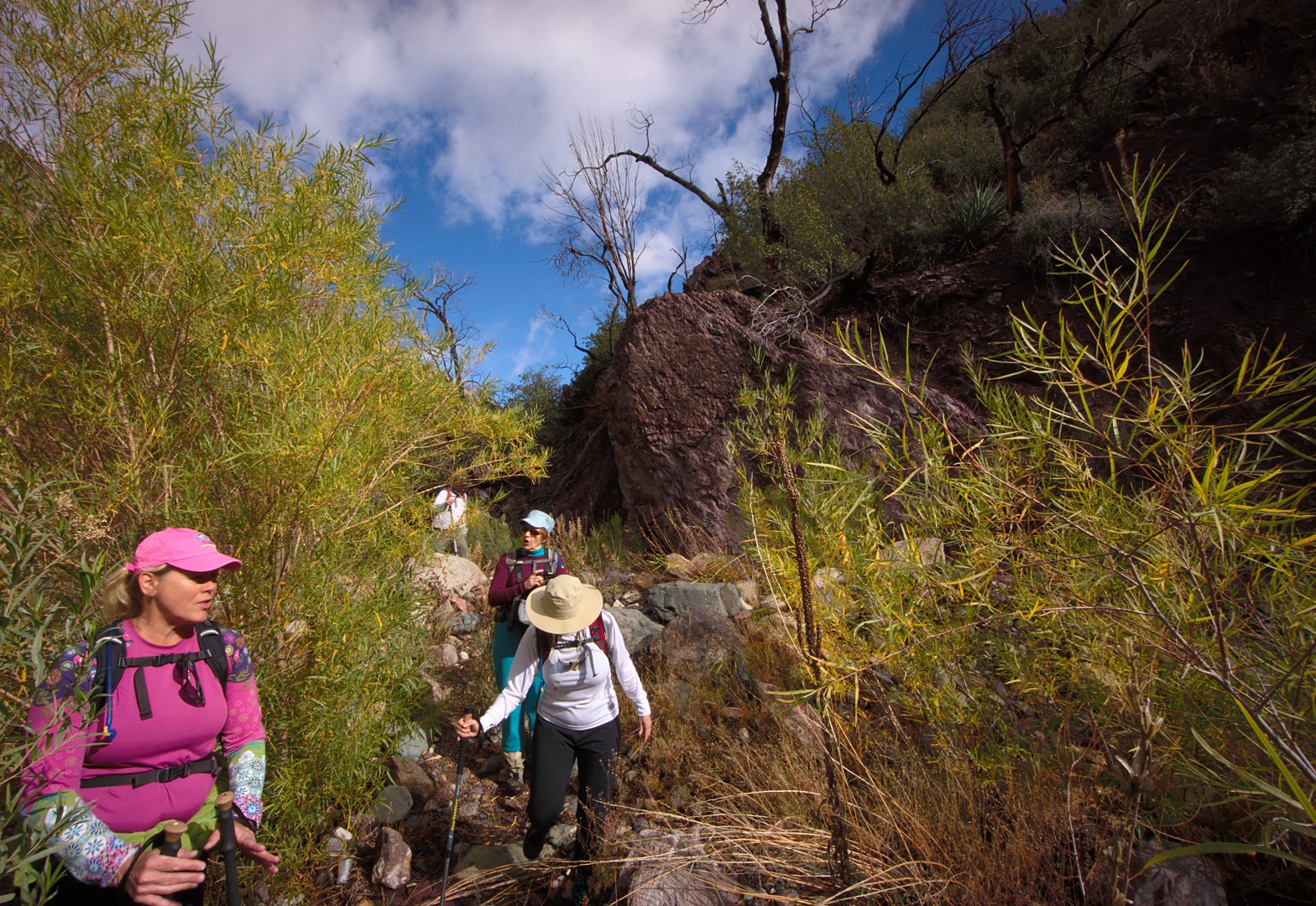 Marilyn readies her camera to take her own photos of this area: 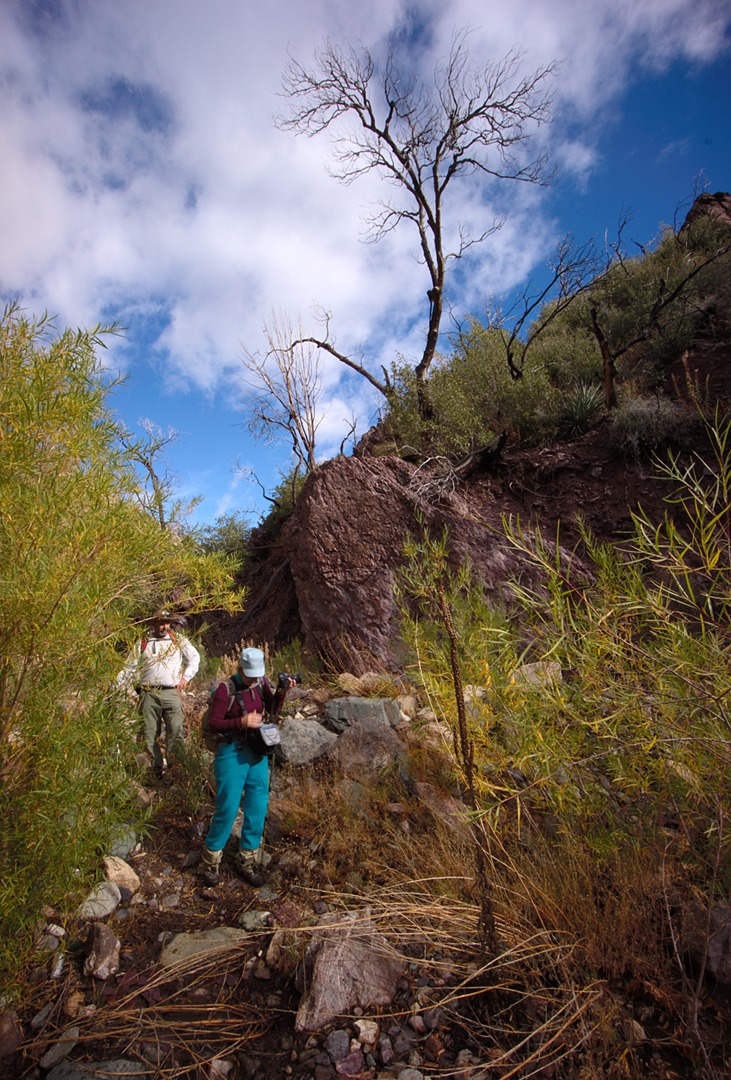 Janet finds a way across the creek.  I lost count of the number of times we ended up crossing it. 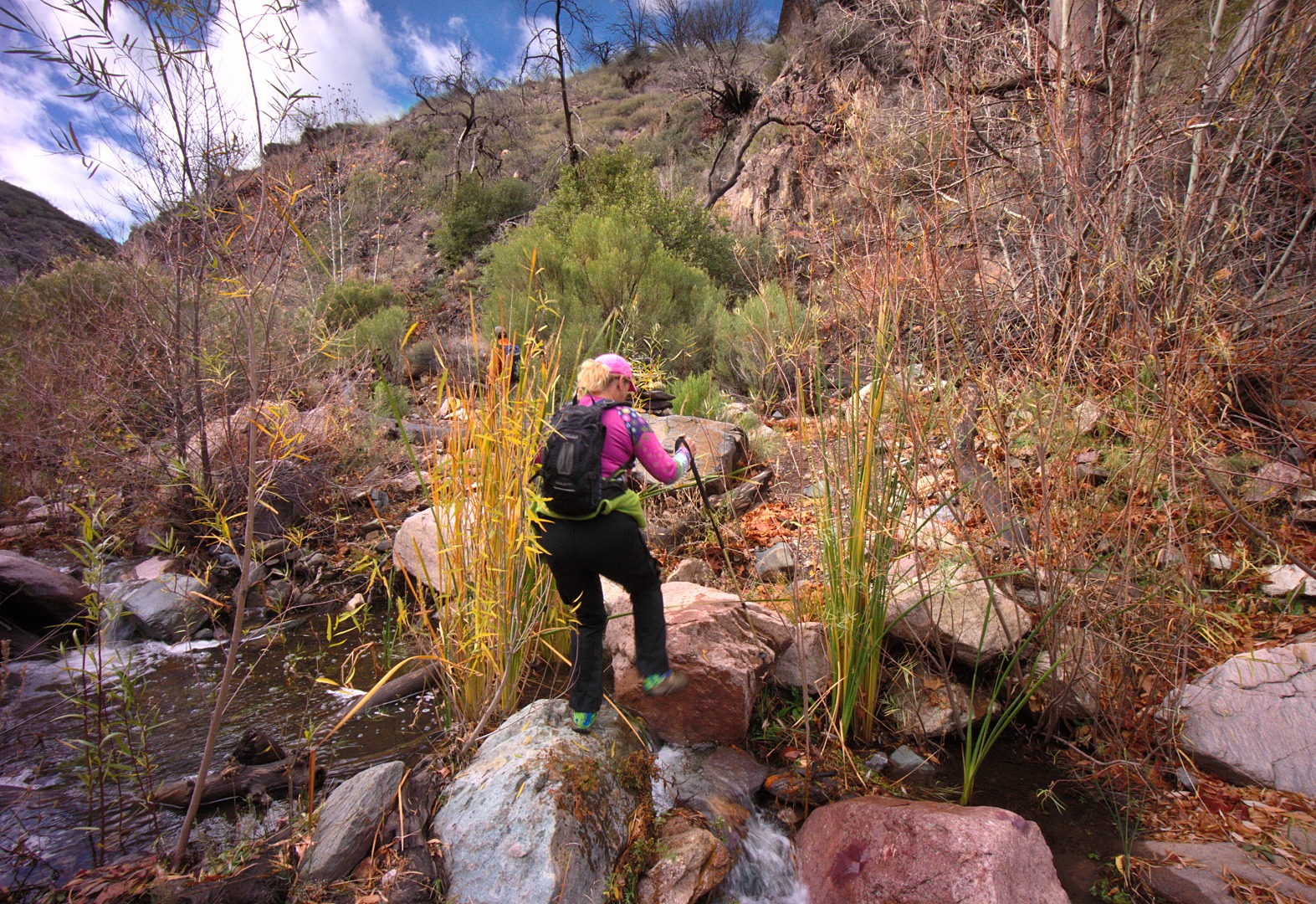 Nick pretends to gnaw on a bone that he found.  Most of us stopped for lunch shortly thereafter. 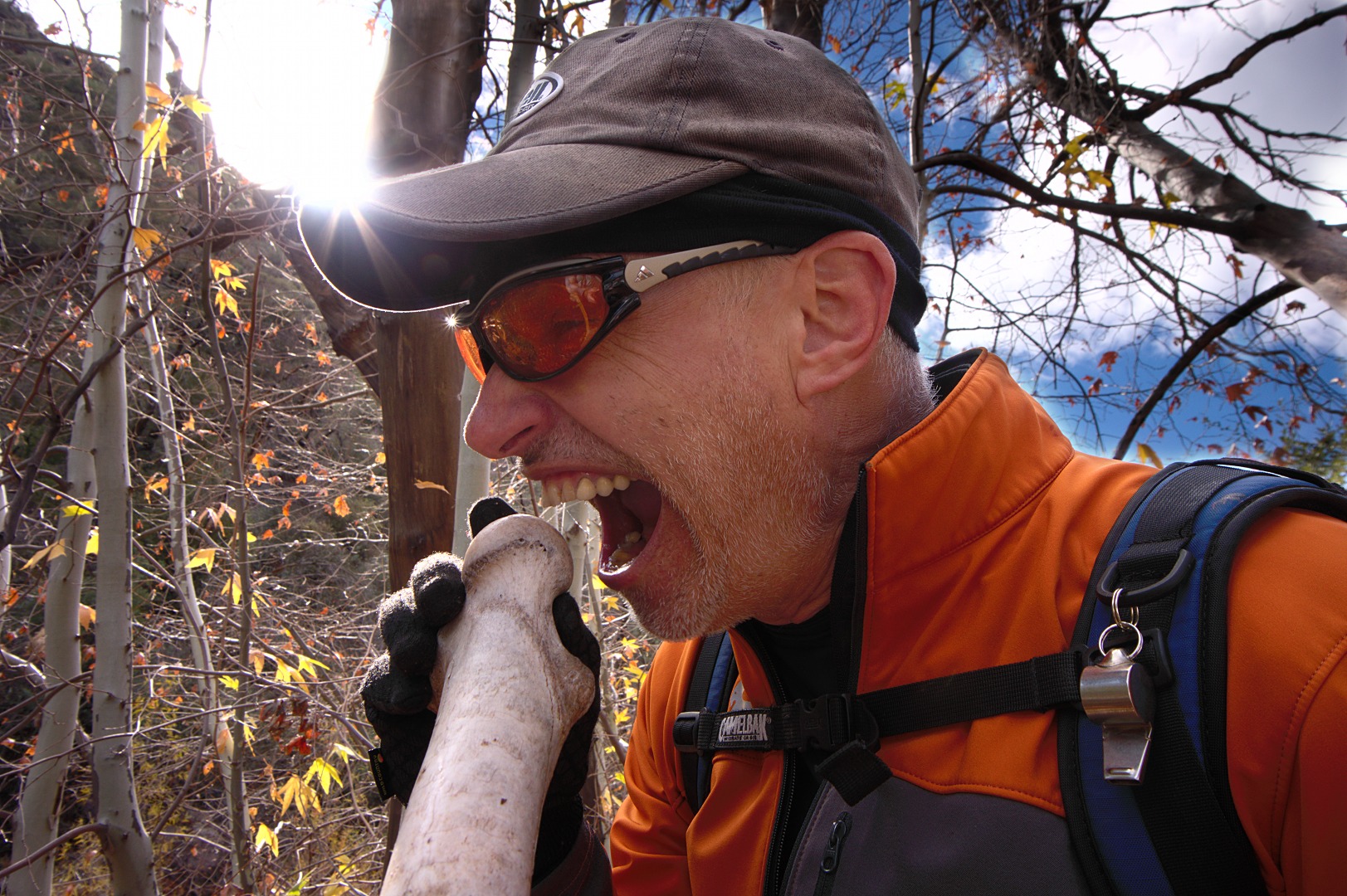 I got this photo of some rapids as the rest ate lunch. 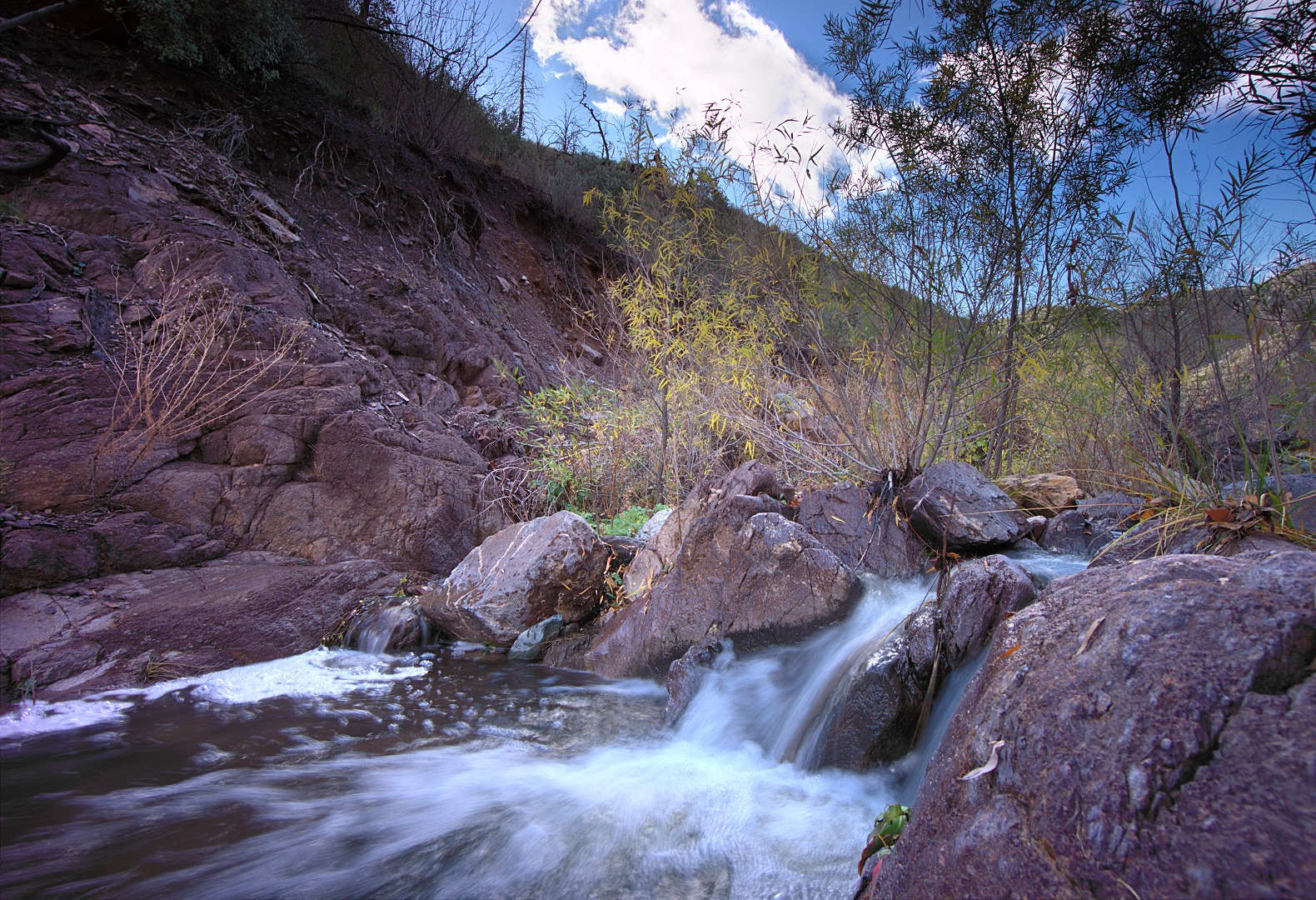 Janet hikes above another small waterfall. 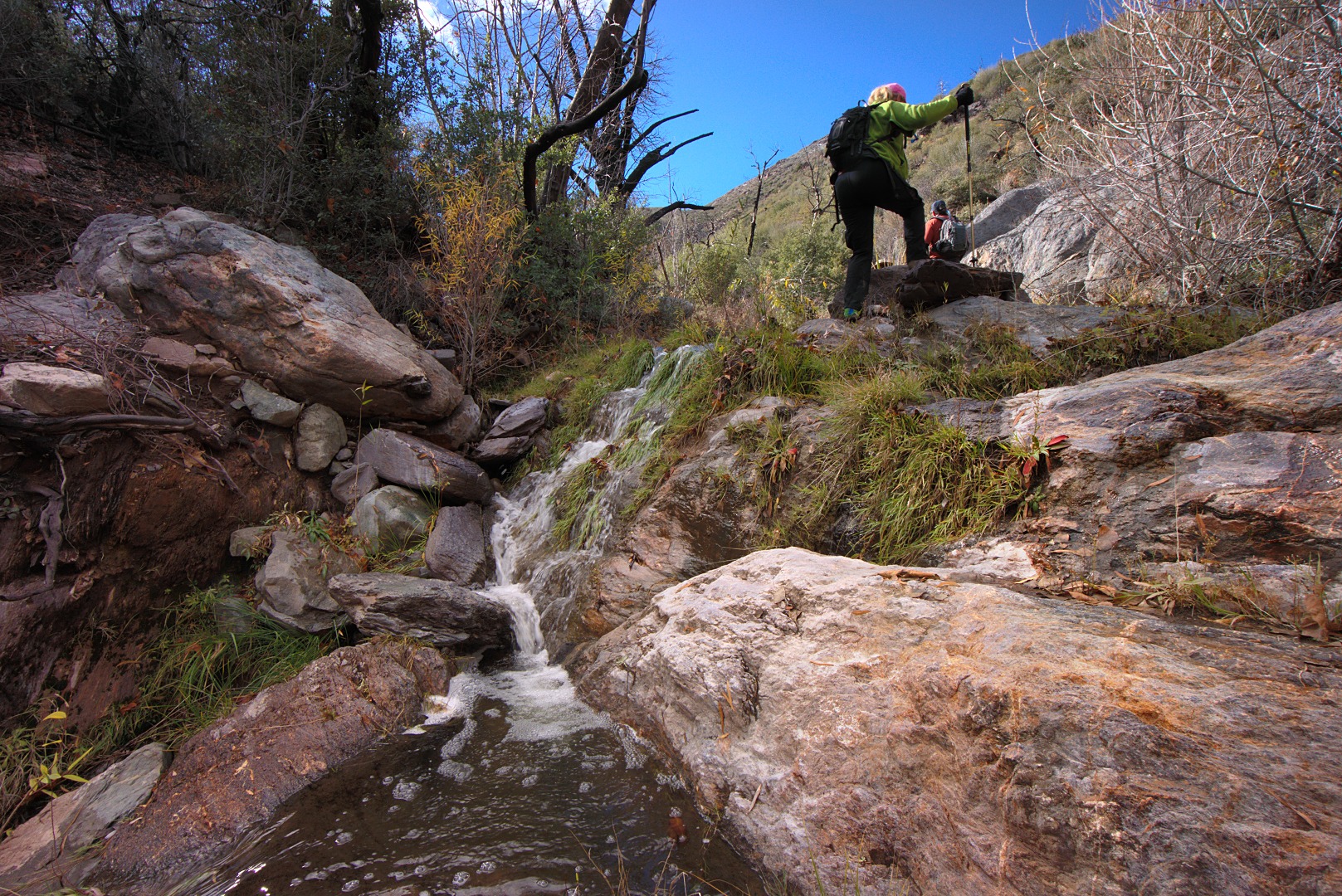 The same waterfall with the Sun peeking through the vegetation: 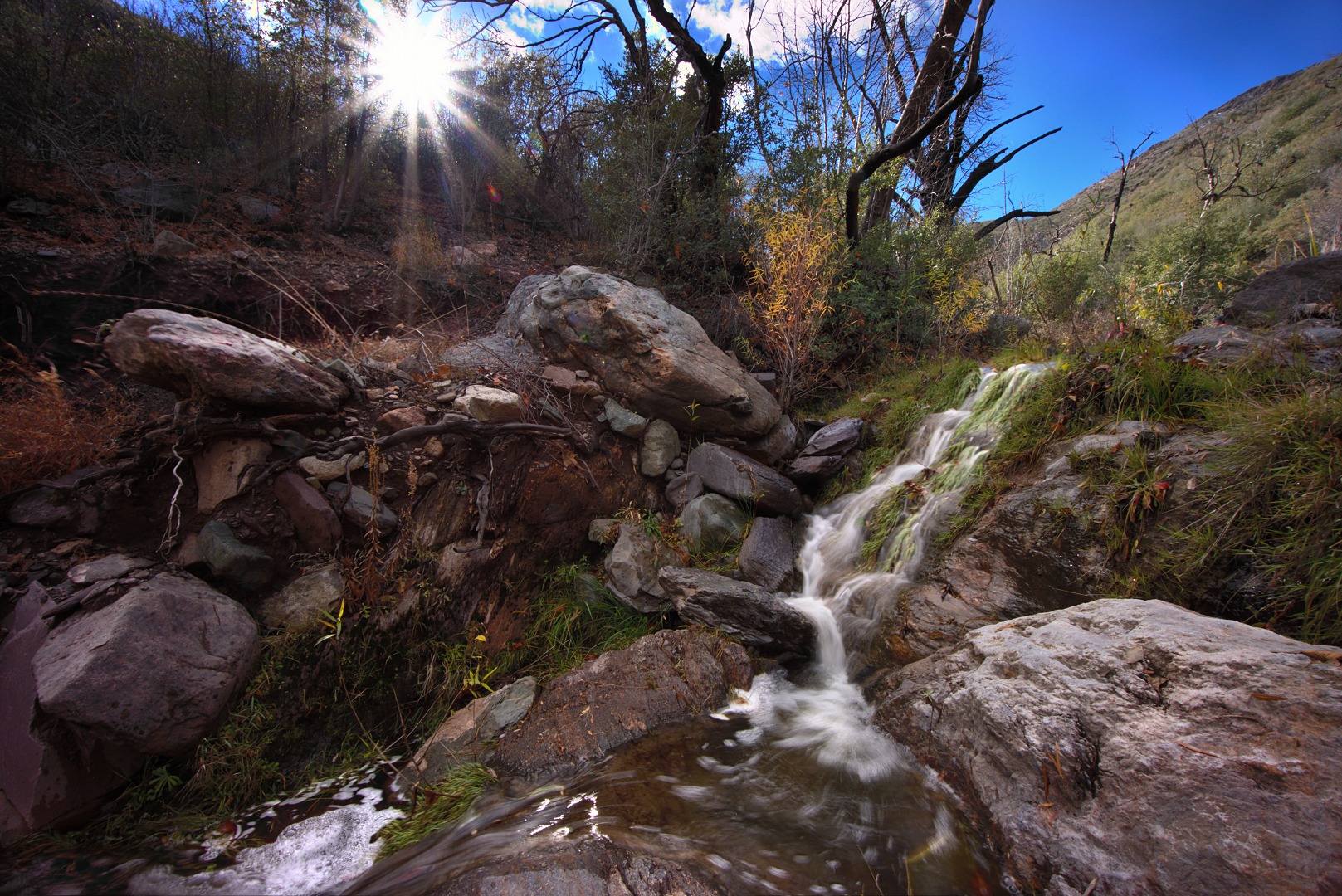 I thought it was interesting to see stones intertwined with the roots of this fallen tree. 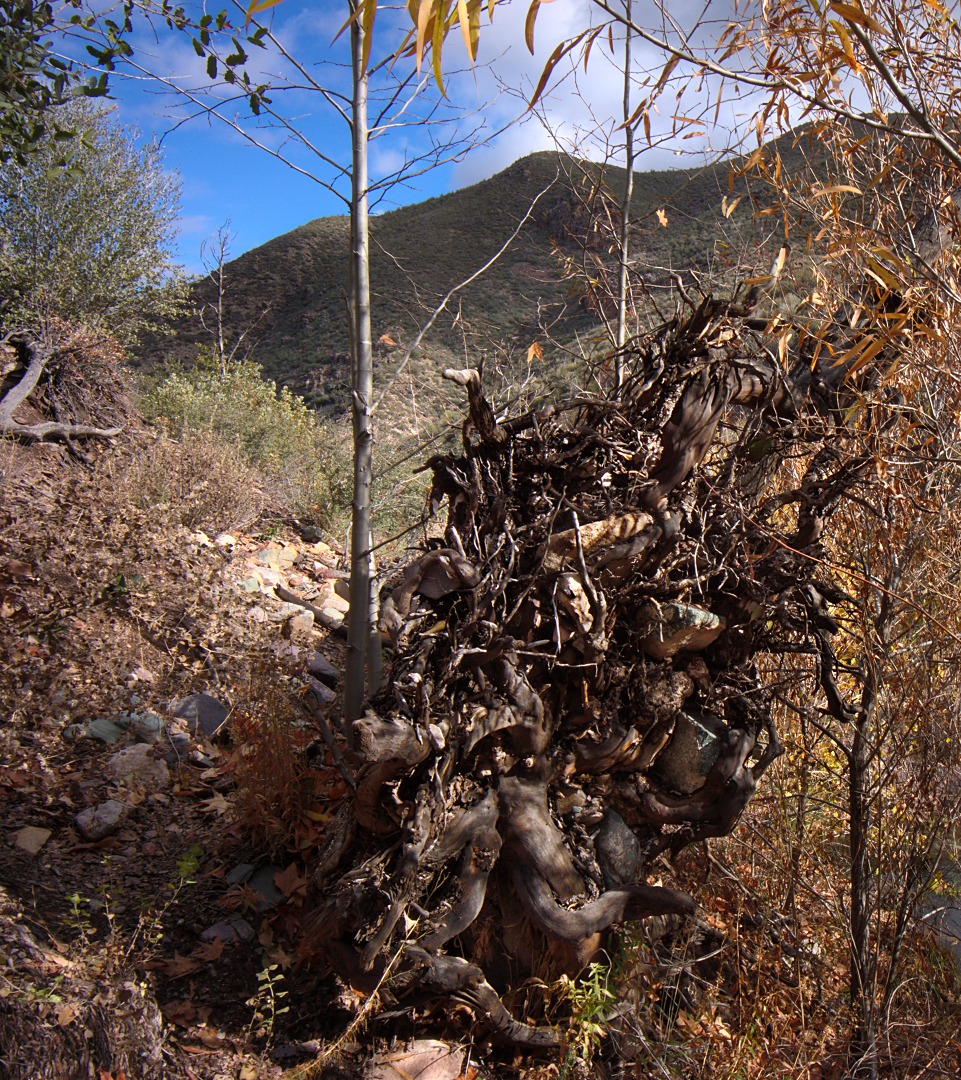 Nick rests by the creek while the rest of of catch up: 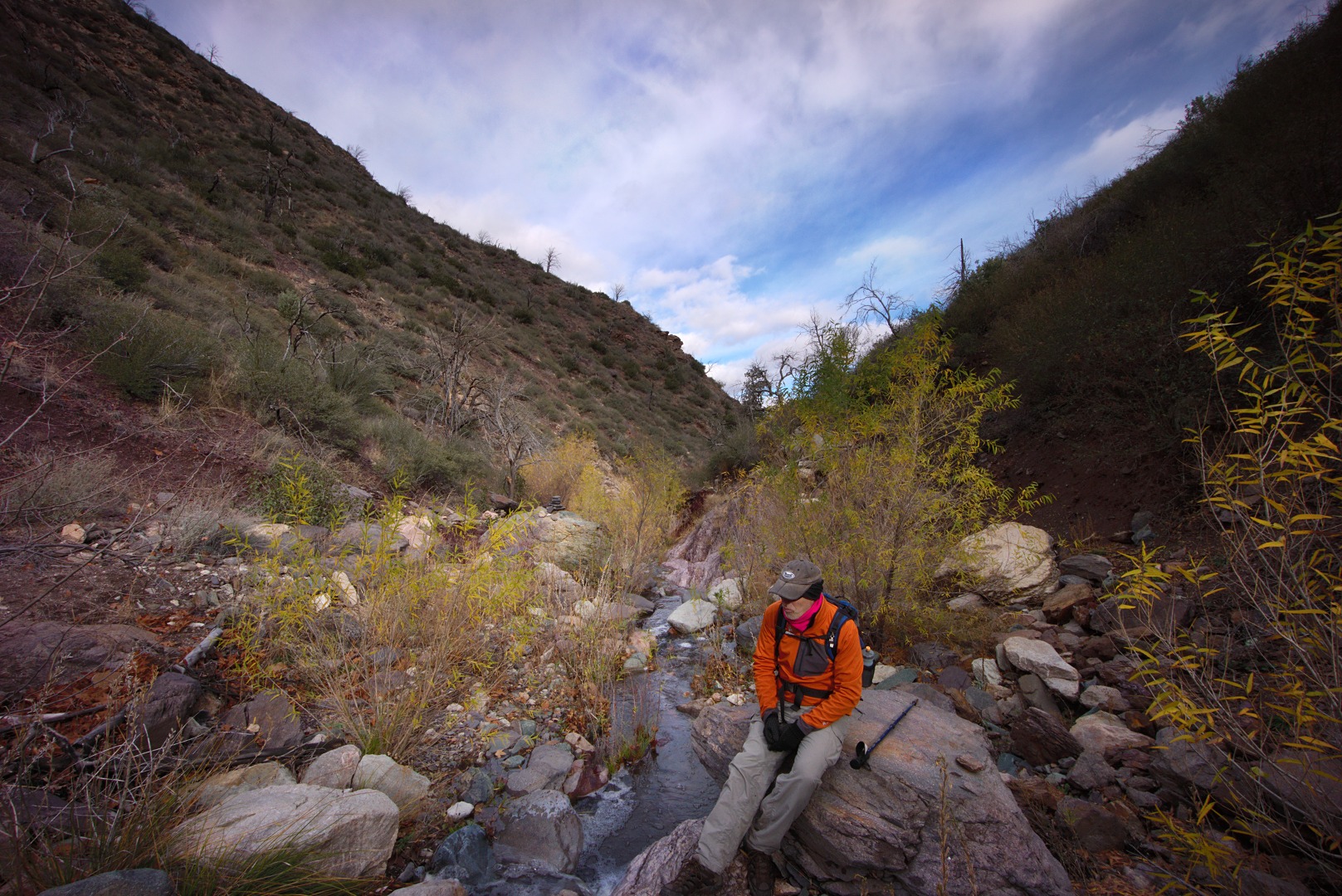 Linda, Marilyn, Nick, Janet, Bob, and Allen pose alongside and behind some cattails.  Apparently, the brim of my hat made it into the photo too. 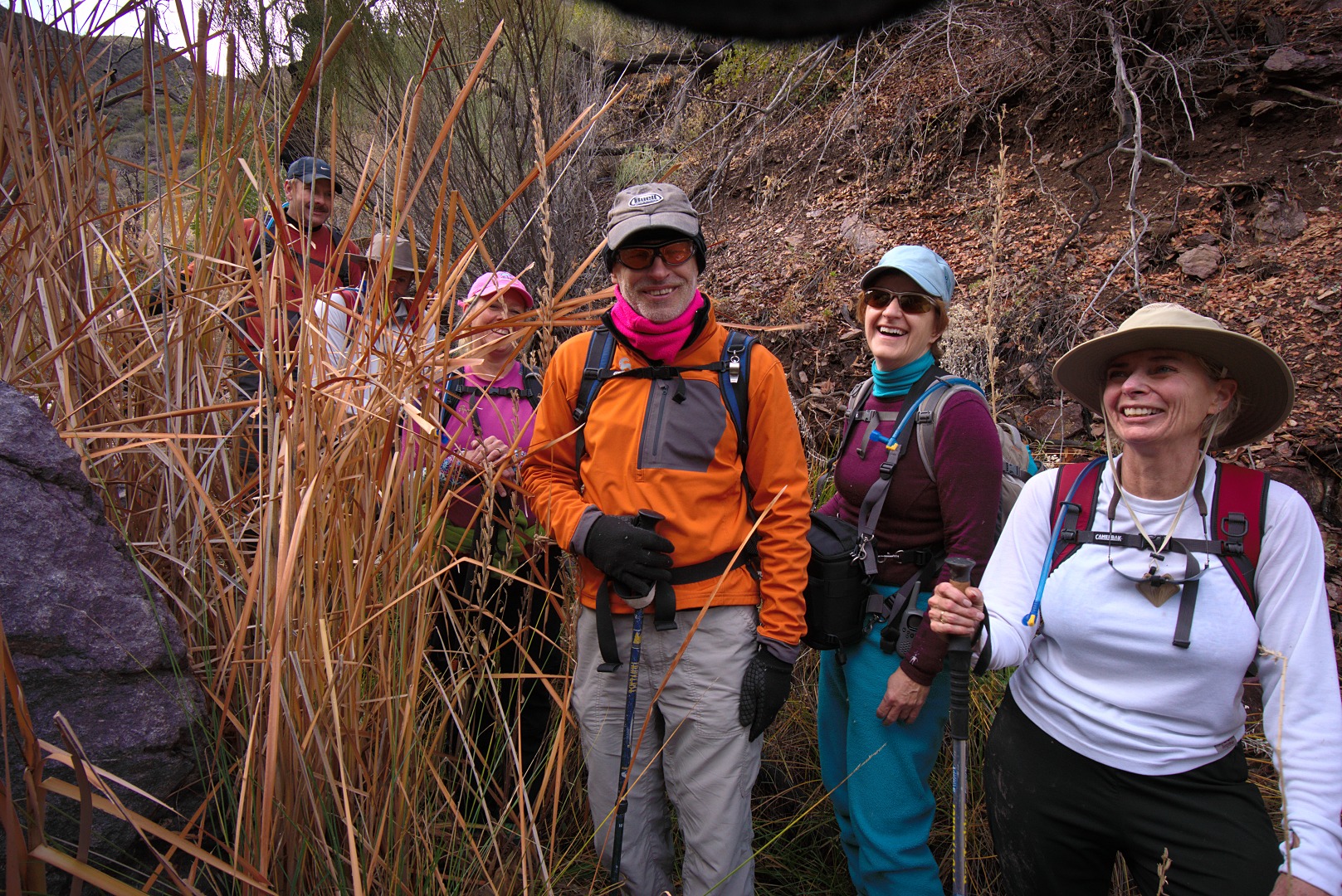