Marilyn, Joe, Nick, and I hiked portions of the Bear Flat Trail and the Mail Trail in the Hell’s Gate Wilderness on Sunday.  My GPS showed that my total ascent was 2392 feet with a total distance of 6.64 miles.  Joe, Marilyn, and Nick went a somewhat shorter distance, doing portions of the Mail Trail twice, but perhaps going only to the halfway point along the Mail Trail.

Joe resets his GPS for the hike.  Marilyn and Nick are looking around in the distance. 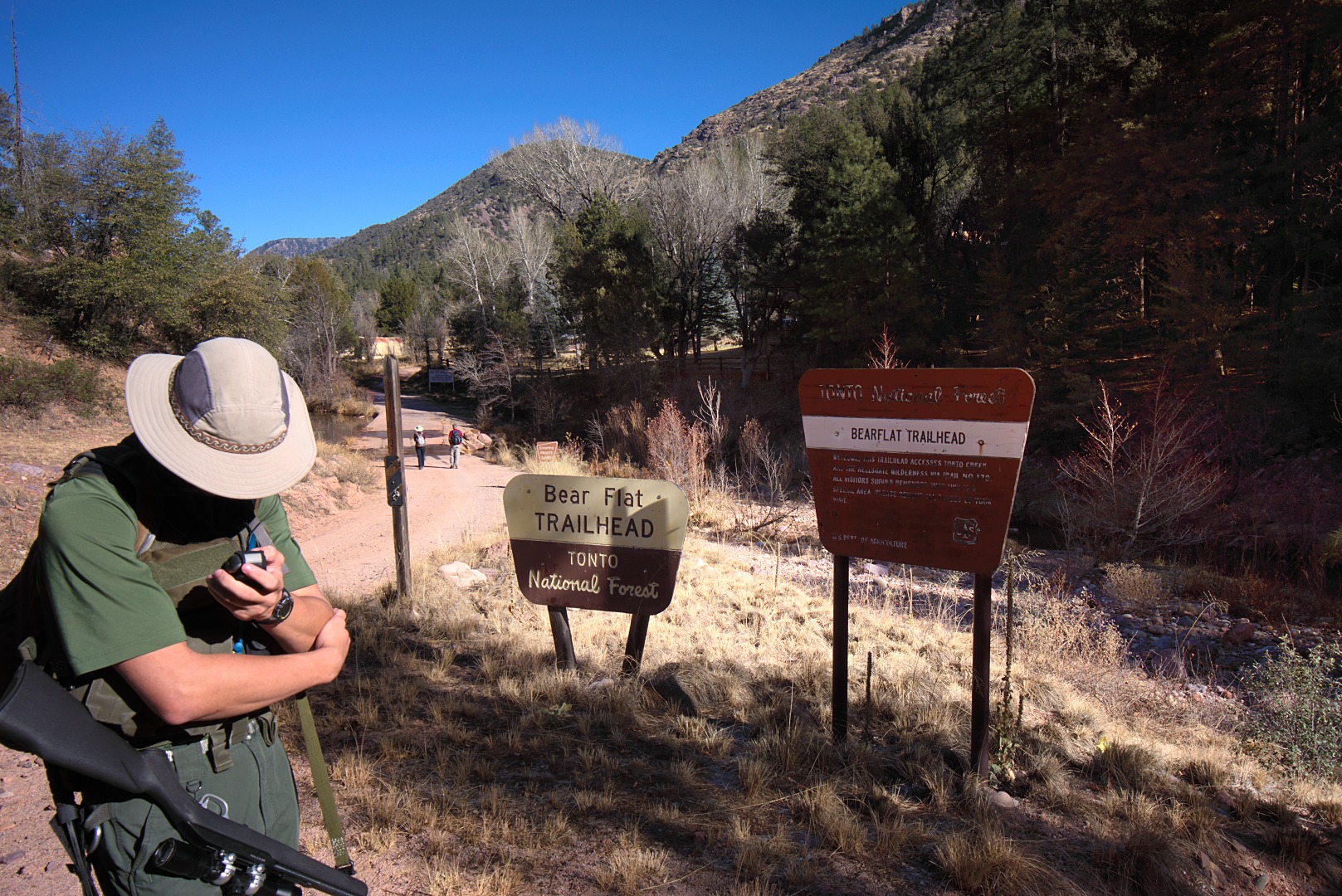 We had to cross the Tonto Creek at the beginning.  We crossed by stepping on the rocks piled up from halfway up at the left edge of the photo.  Even though I tried to stay on the rocks, I still got some water in one of my shoes. 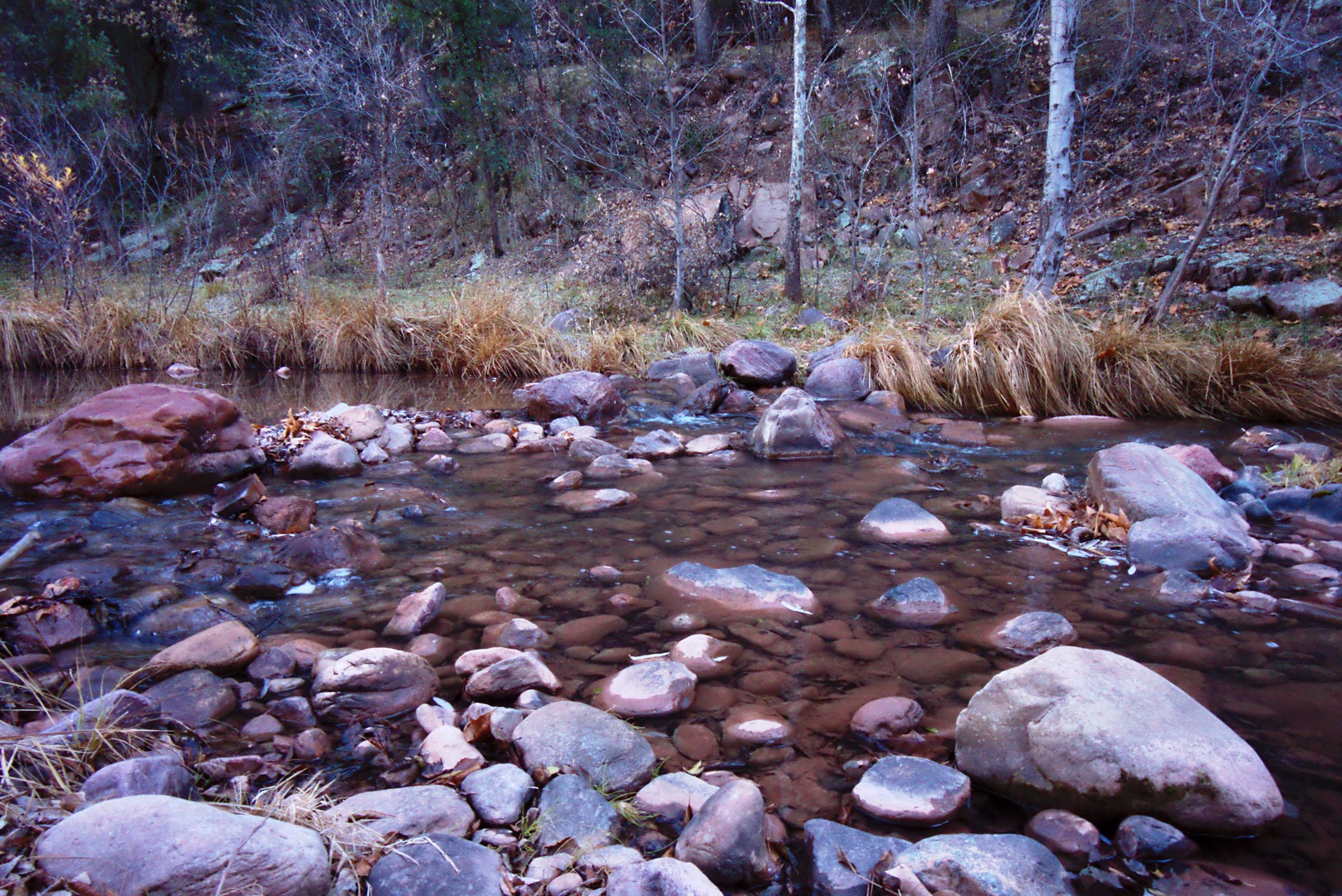 We turned the wrong way shortly after crossing the creek.  We saw a sign for the Bear Flat Trail and turned right.  We should have gone left, just past and above some private land with a house and a number of outbuildings.  The path to the right took us where needed to go too, but it was a lot harder.  It was a steep narrow trail with lots of switchbacks set into the side of an even steeper hill.  We gained about 400 feet of elevation in this short section of the hike. 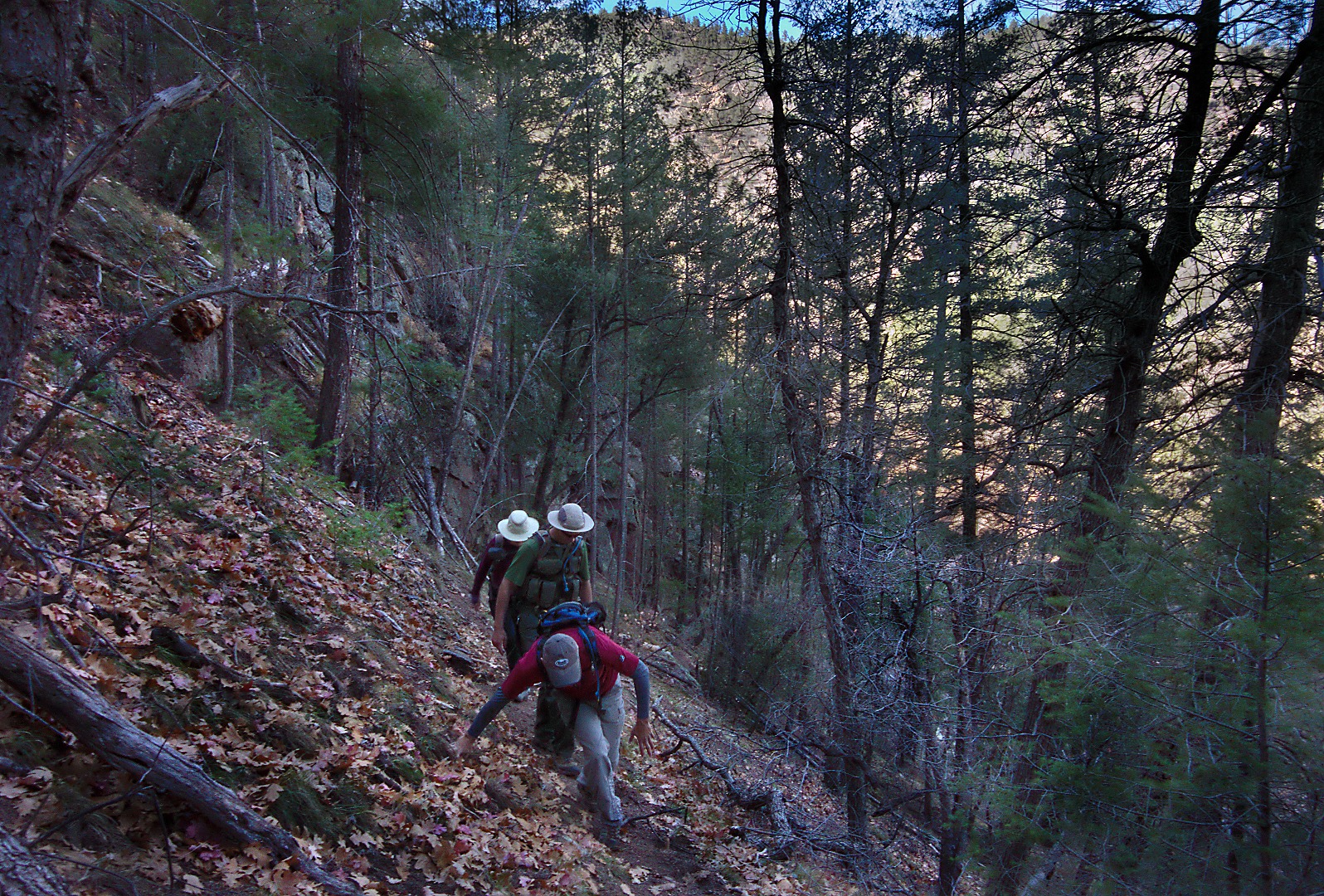 Nick and Marilyn emerge from the short, but very steep section at the beginning of the hike: 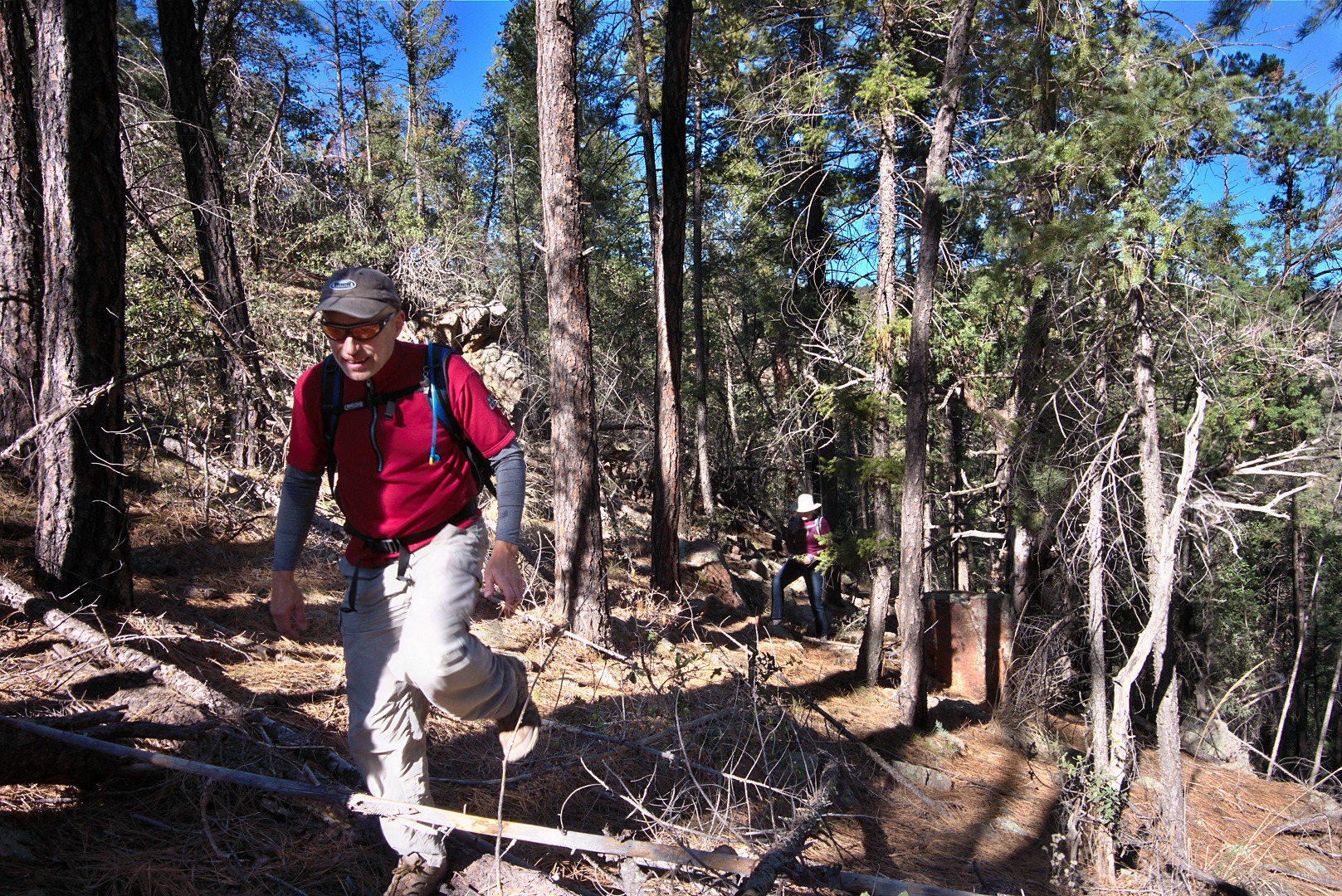 At this point, we’ve all joined the actual Bear Flat trail.  (Joe is in this picture too, but is in the trees.)  The trail was fairly wide; I’ve read that it was once a jeep trail. 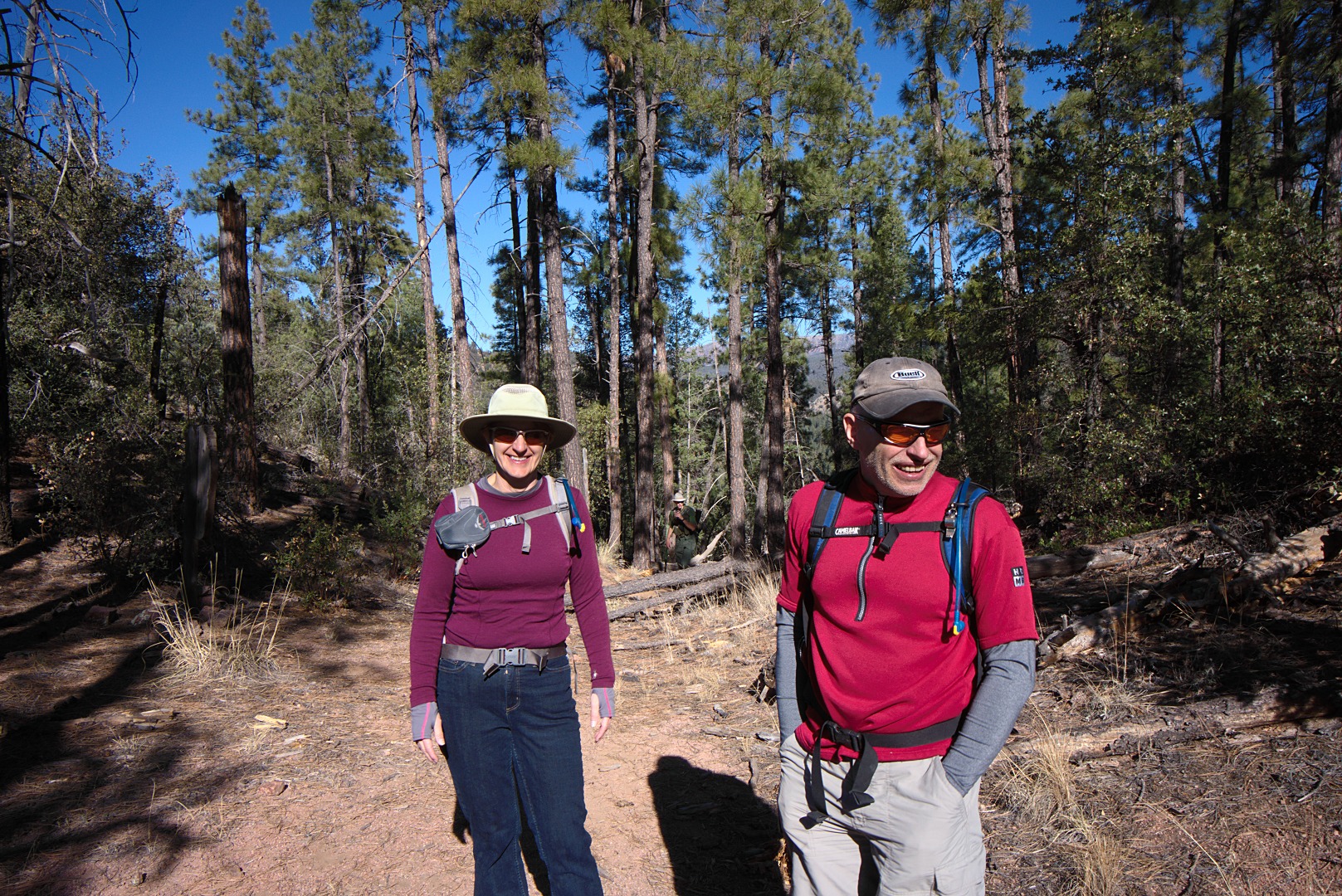 Tall trees on both sides of the trail provided some shade from the sun: 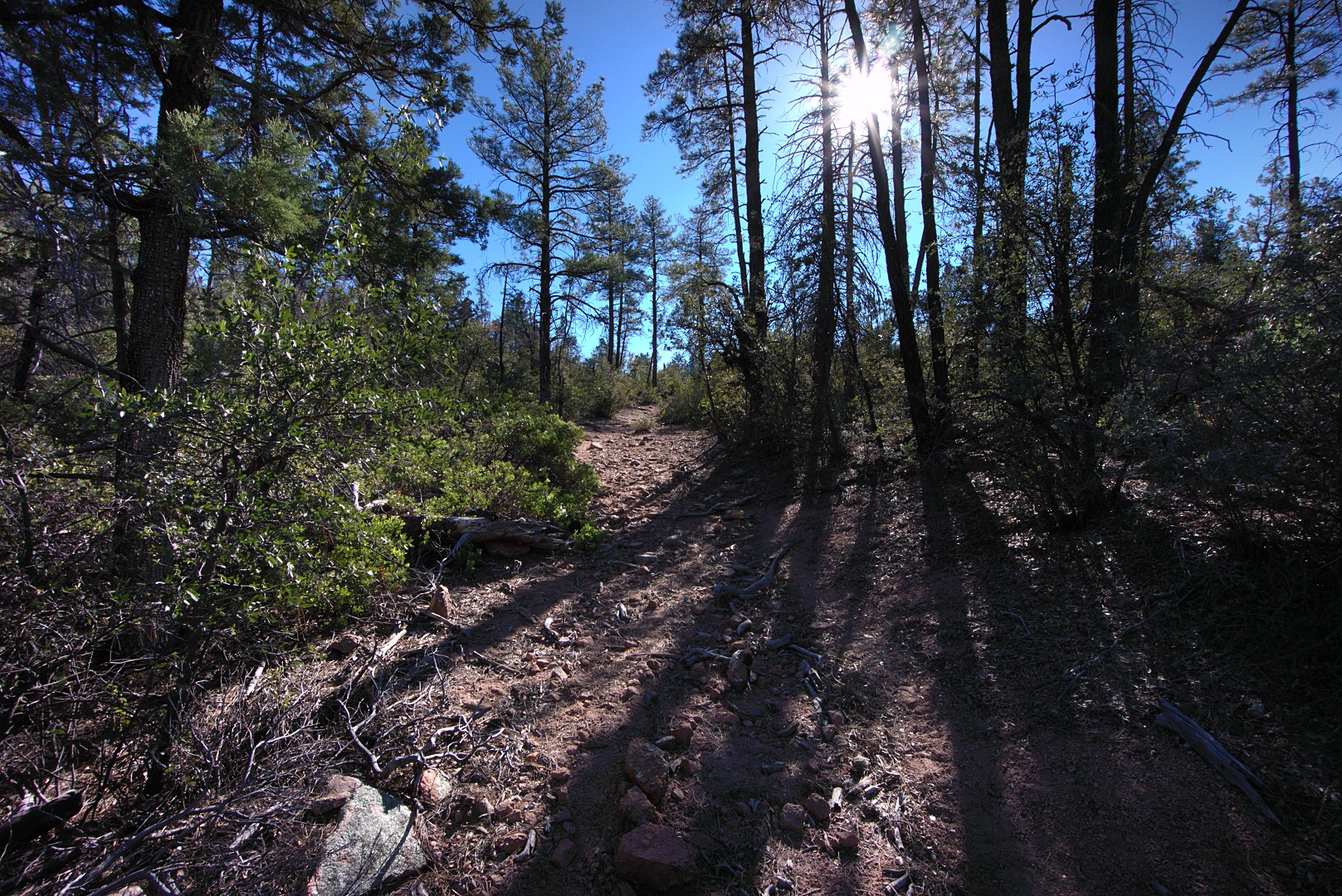 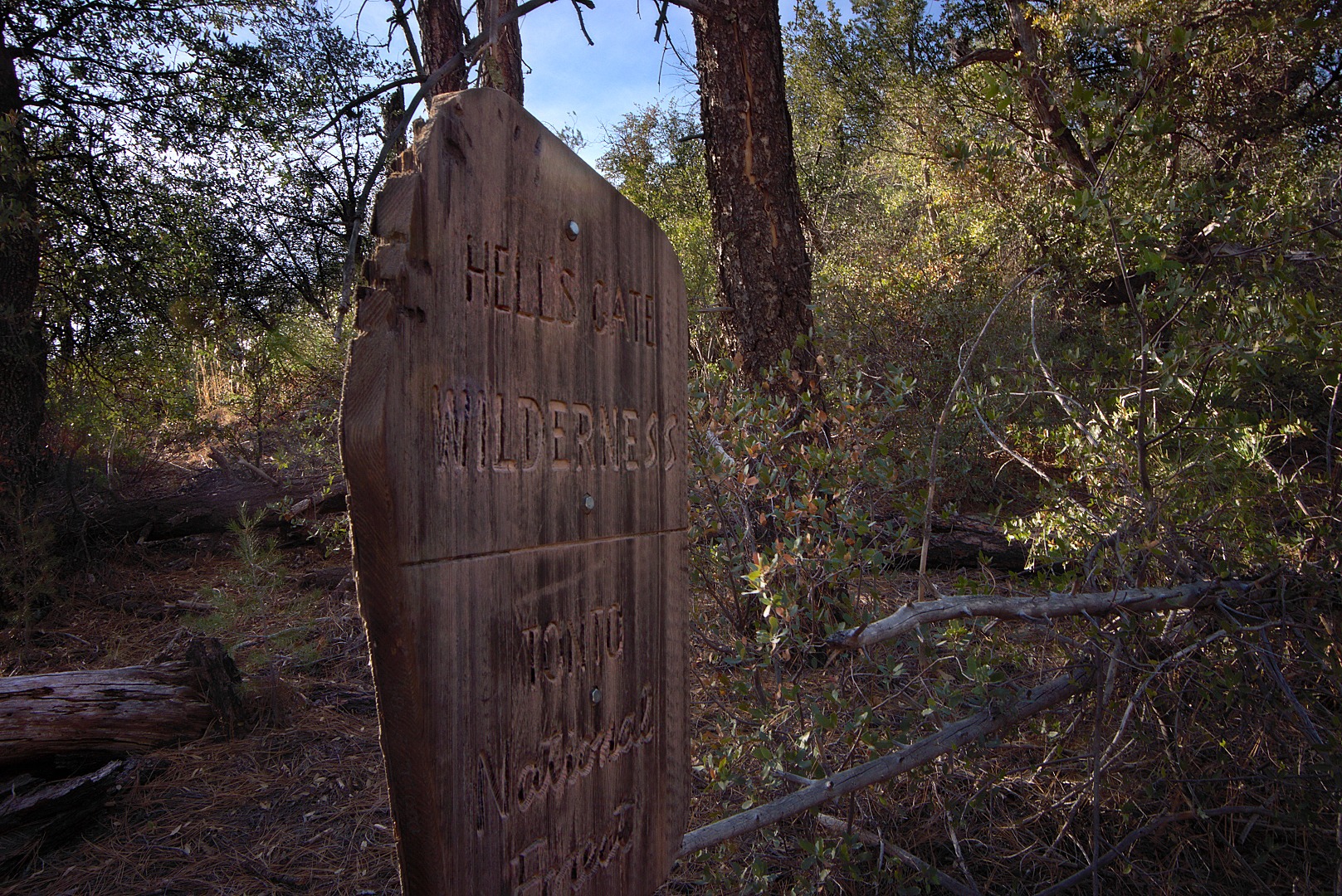 The Bear Flat Trail eventually left the Wilderness and forked off.  We explored the right fork for a while.  It lead to a couple of tanks, one of which was recently fenced off.  We lost the trail at that point.  It might have continued on the other side of the fence, but we would have had to cross the fence to do so.  That fork of the trail looked like an old logging road to me.

Below is a photo of some agave that I saw near one of the tanks: 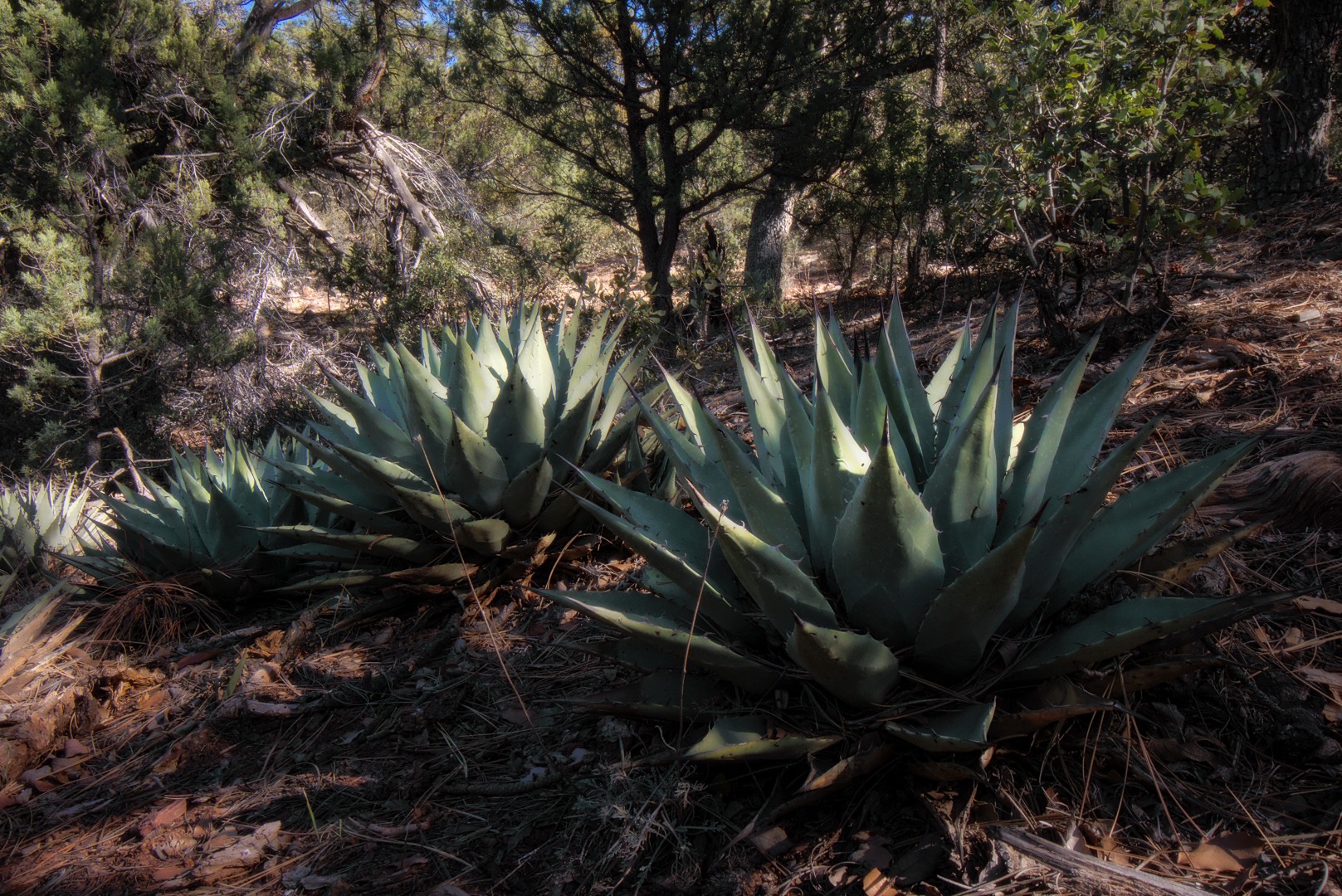 We retraced our steps and explored the left fork, which headed more northerly.  After studying the GPS tracks, it is now clear to me that we were on the Bear Flat Trail when we encountered the fence and corral at the second tank.  The north fork that I took is signed as the Mail Trail #178 at its terminus.  The Bear Flat Trail also bears the #178 designation though.  I show a picture of the sign at the terminus later on.

Here is a view looking up at a dead tree that I encountered while hiking the Mail Trail #178. 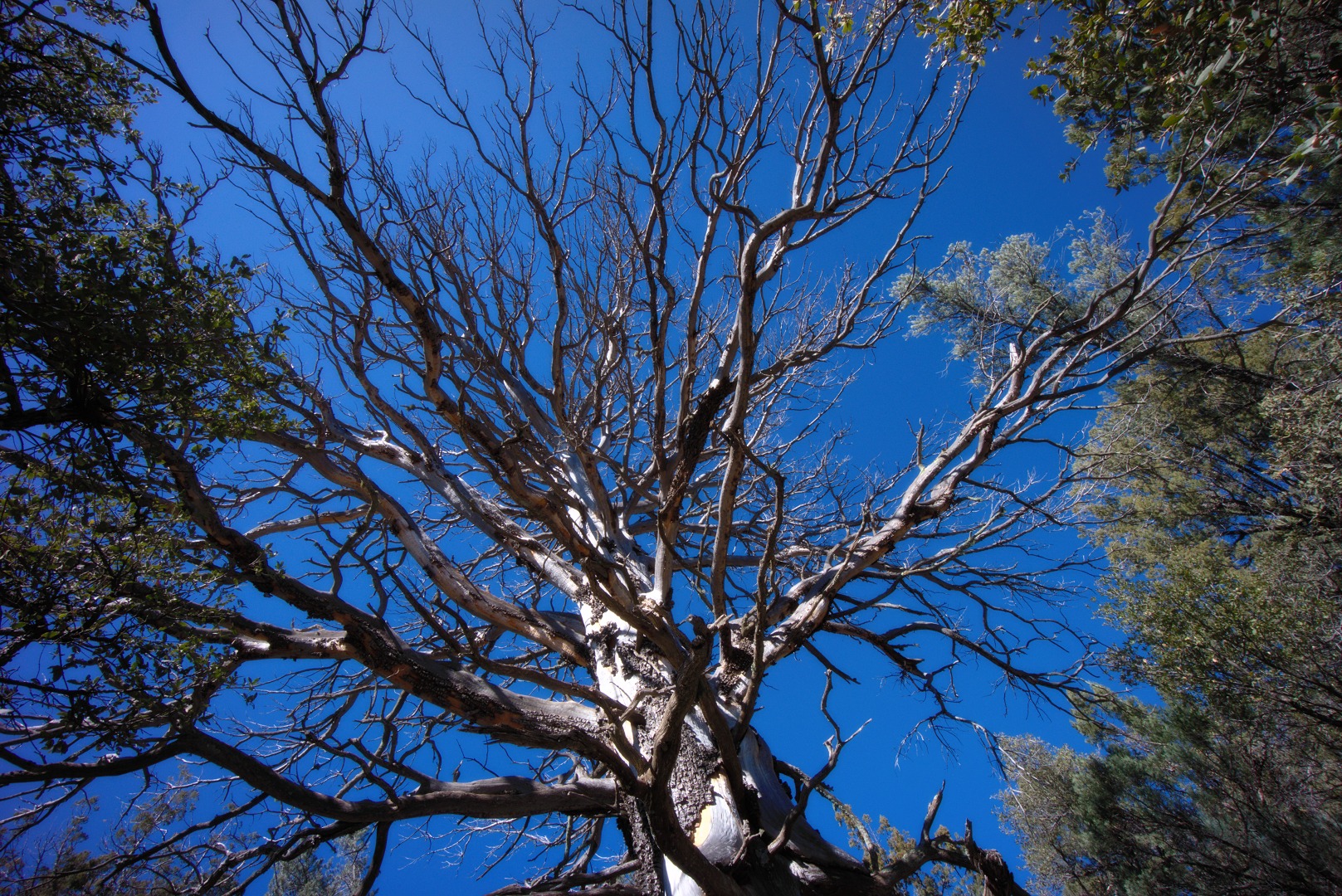 A view looking back on the Mail Trail: 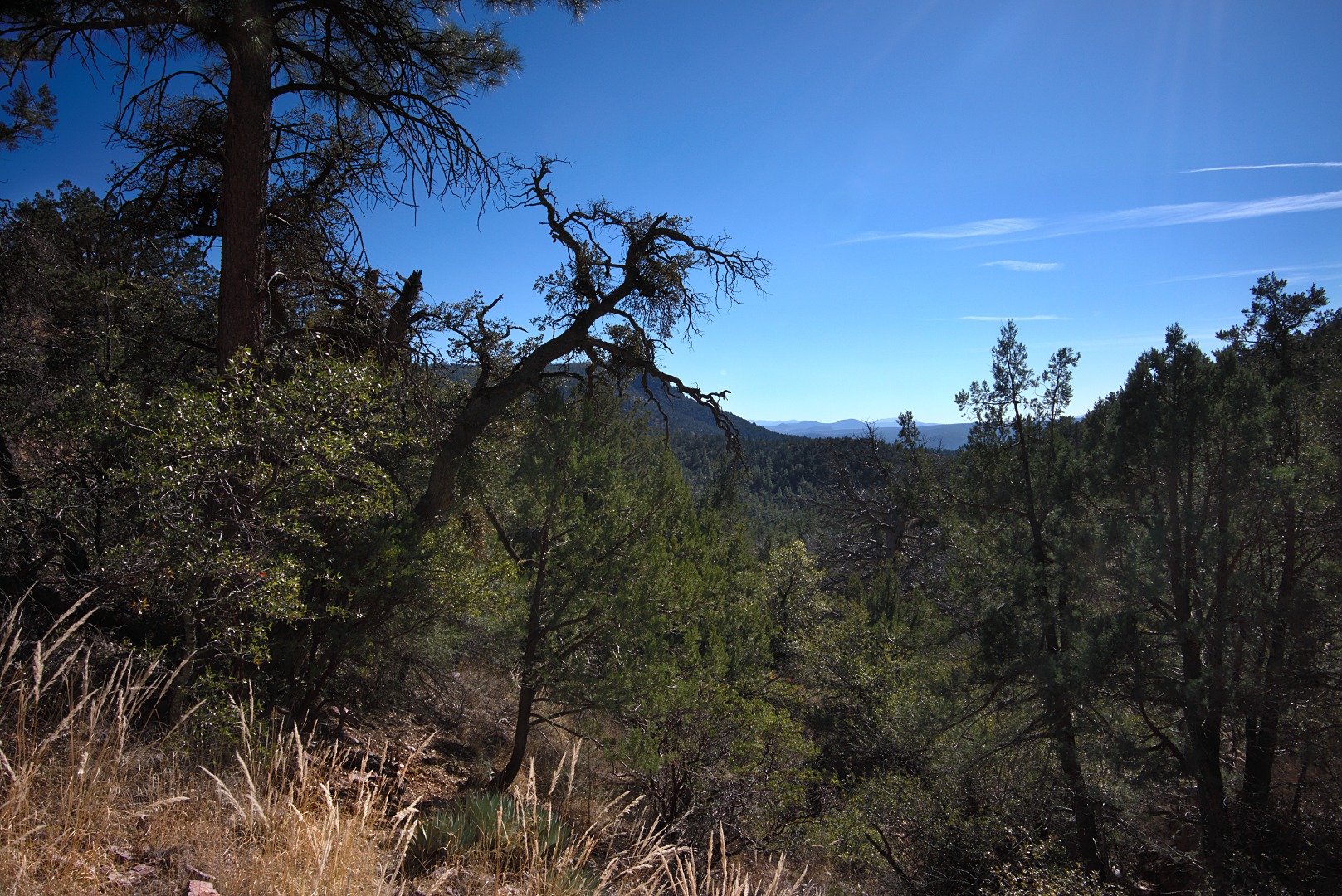 The trail passed a rock slide.  I clambered up on the lower portions of it to get a better view: 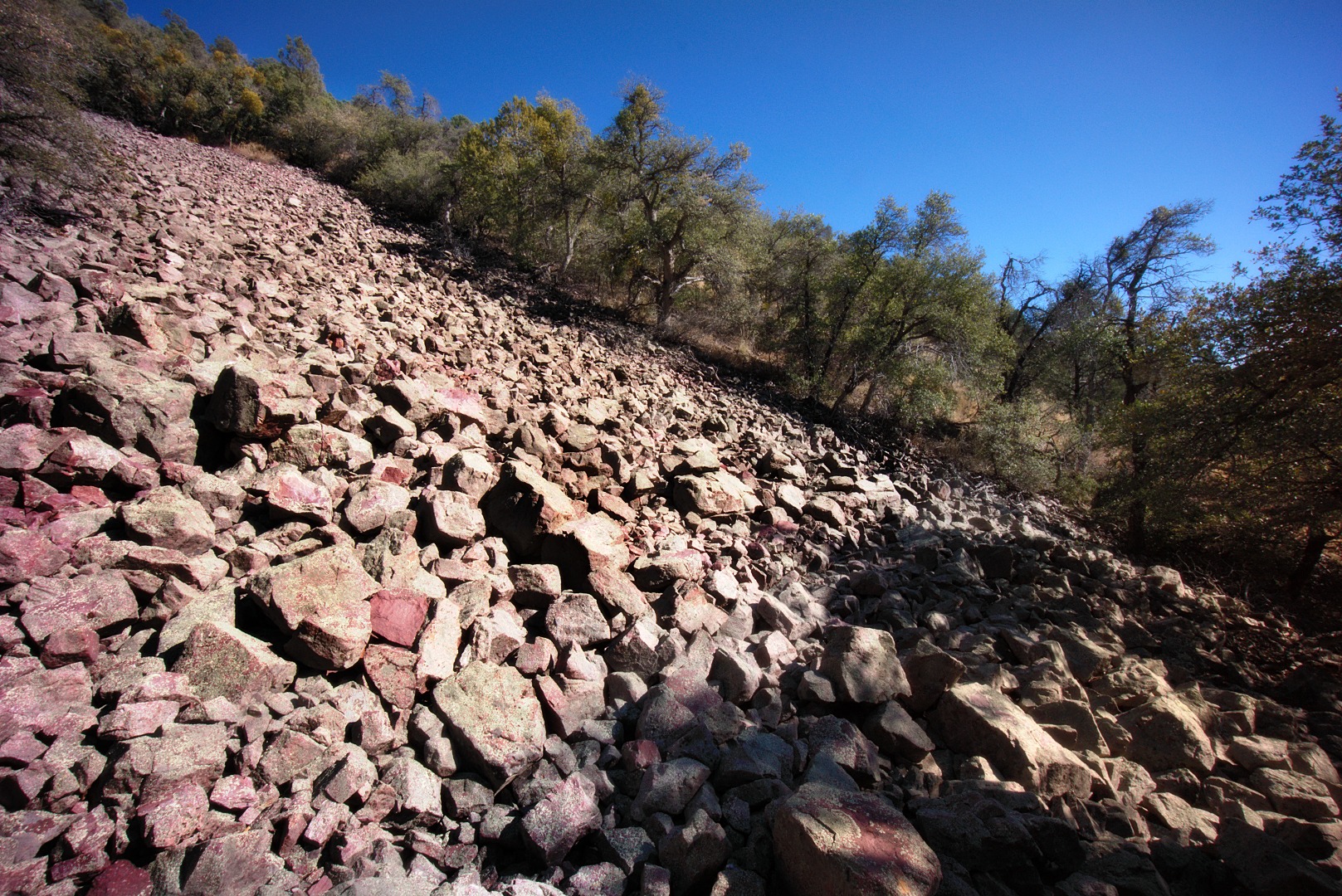 The trail was steep with lots of switchbacks.  You had to look carefully for some of the turnings of the switchbacks because it was easy to miss them.  To make matters even more difficult, there were cows in the area which made their own trails; cows don’t necessarily follow the switchbacks.  I startled a small group of cows at one point.  I only saw them briefly as they ran up the hill.  They were very fit cows.

The trail leveled off and went past a tree with a rusted metal disk attached to it.  I do not know its purpose. 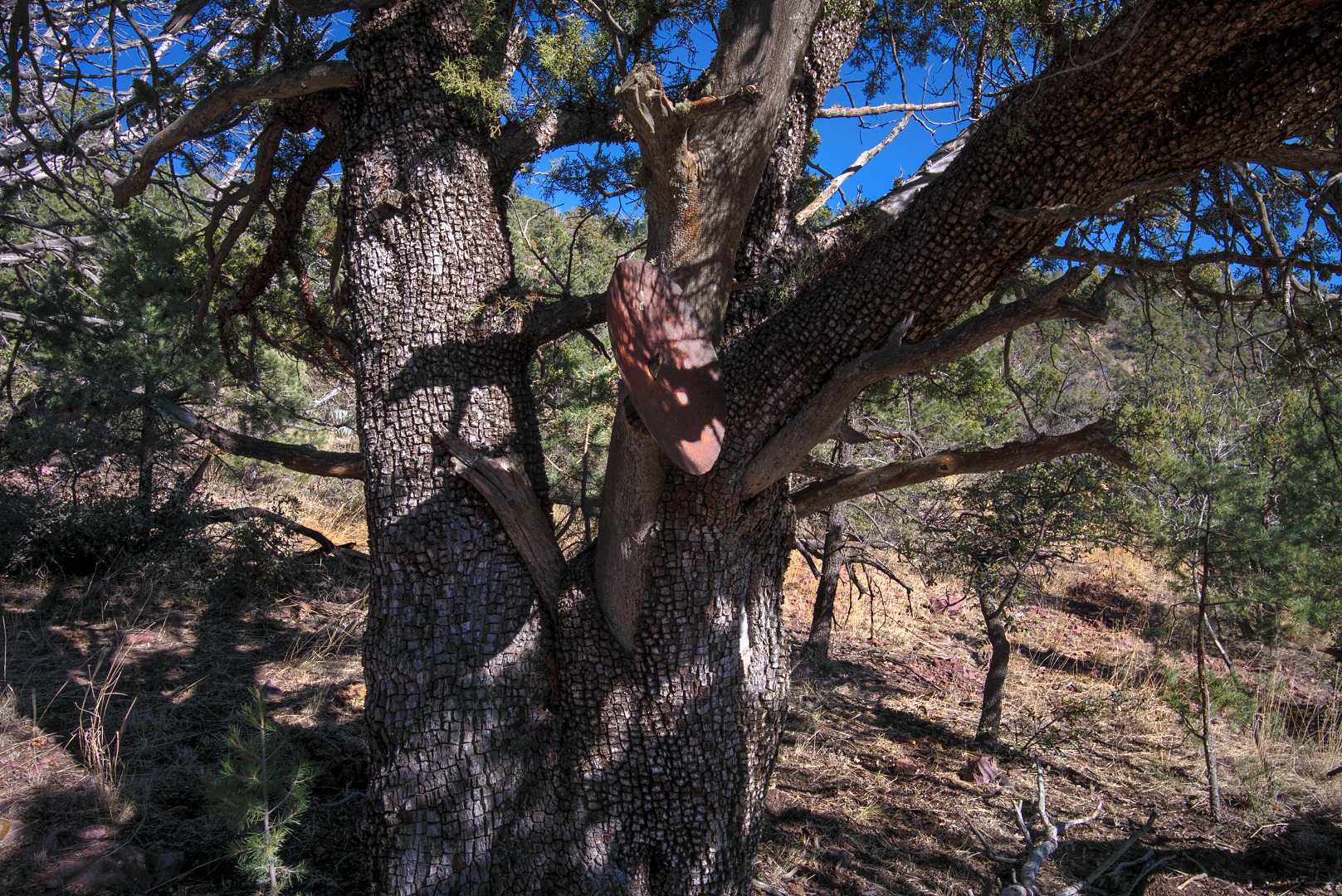 The trail headed up again and the views got even better: 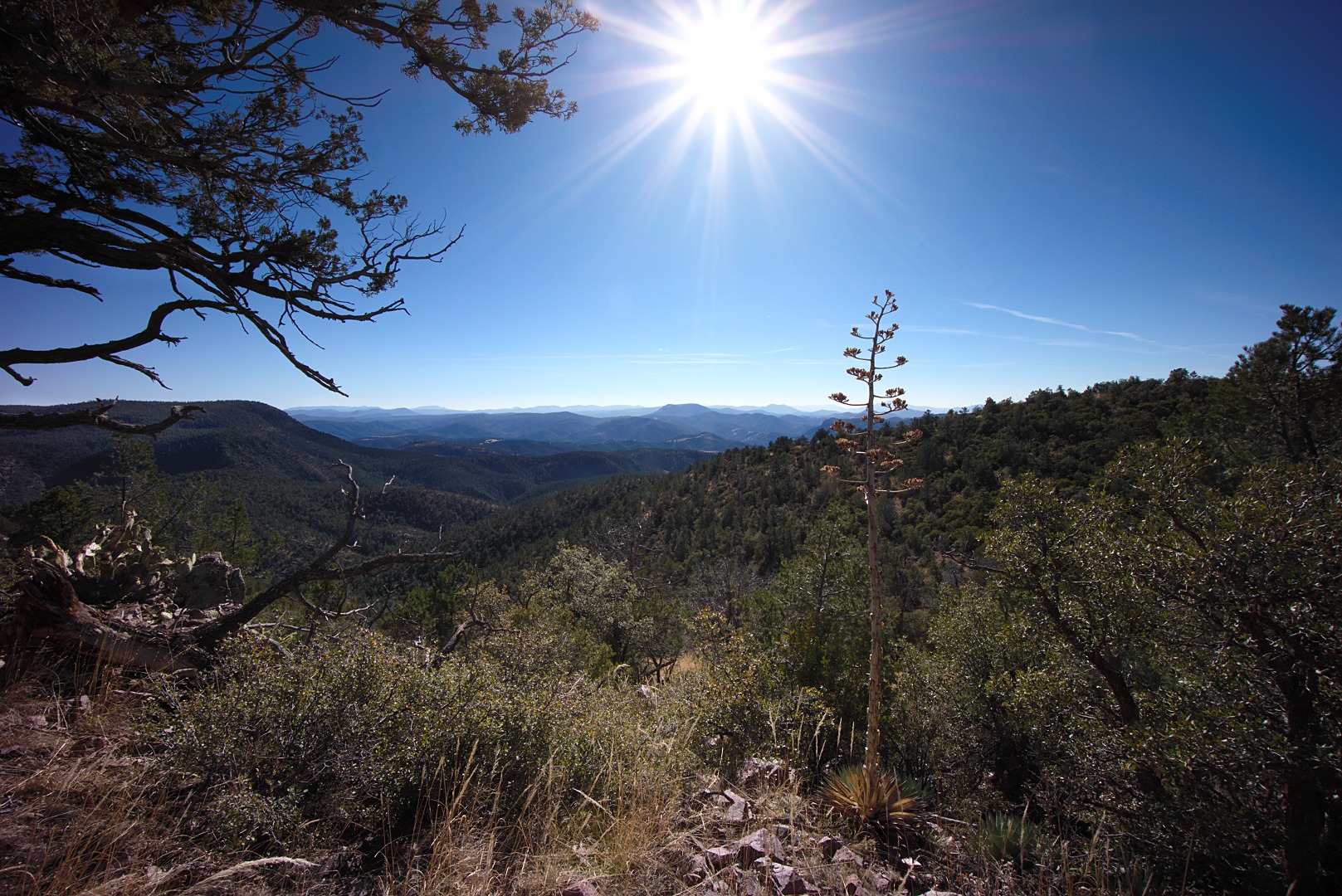 The trail topped out on a ridge with a bunch of dead trees: 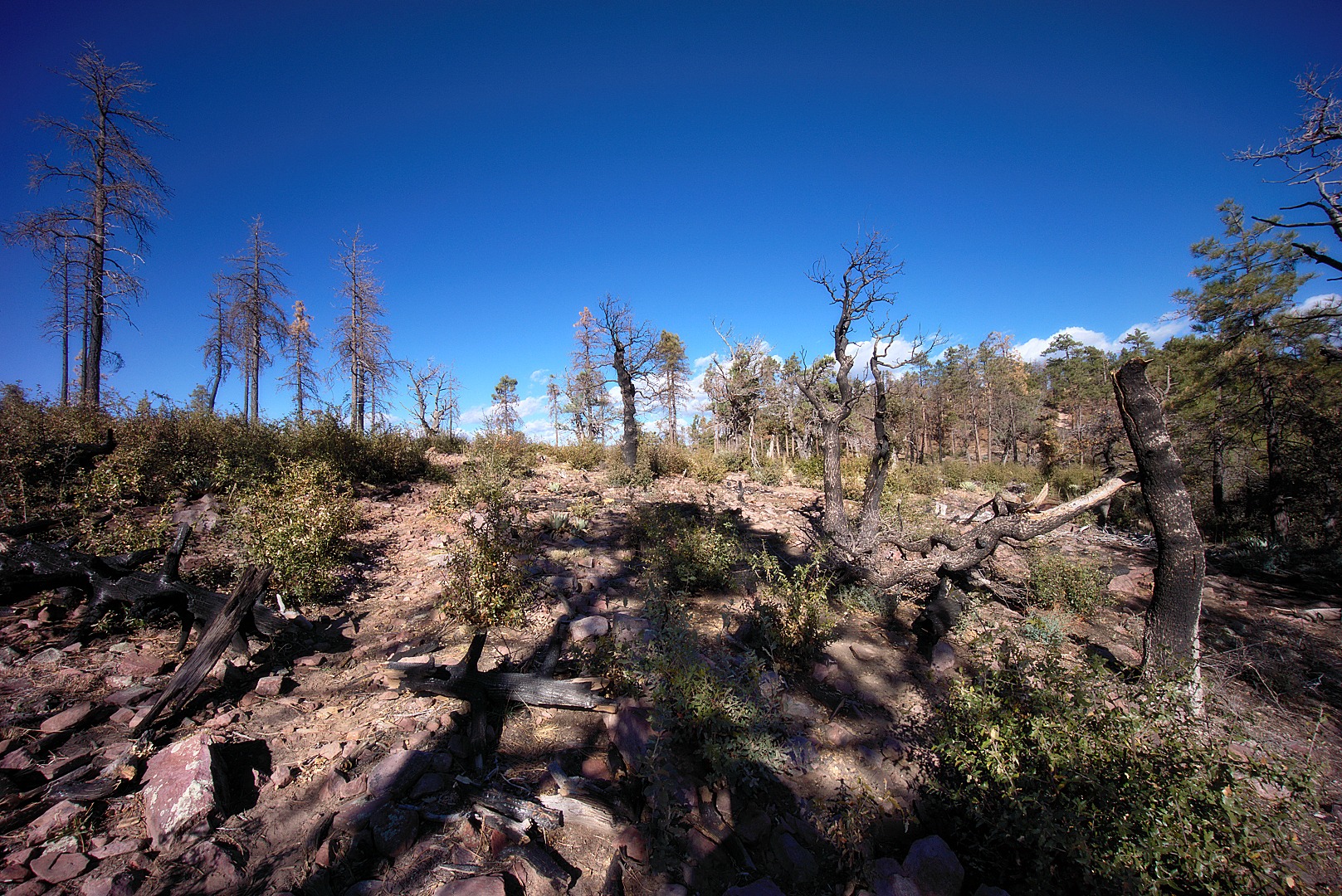 From there, it was only a short way to the end of the trail where I took a photo of these trail signs.  I had just come from the direction indicated by the Mail Trail sign.  The other two arrows point up and down a road.  Hunter Creek Trail is up and Christopher Creek is down. 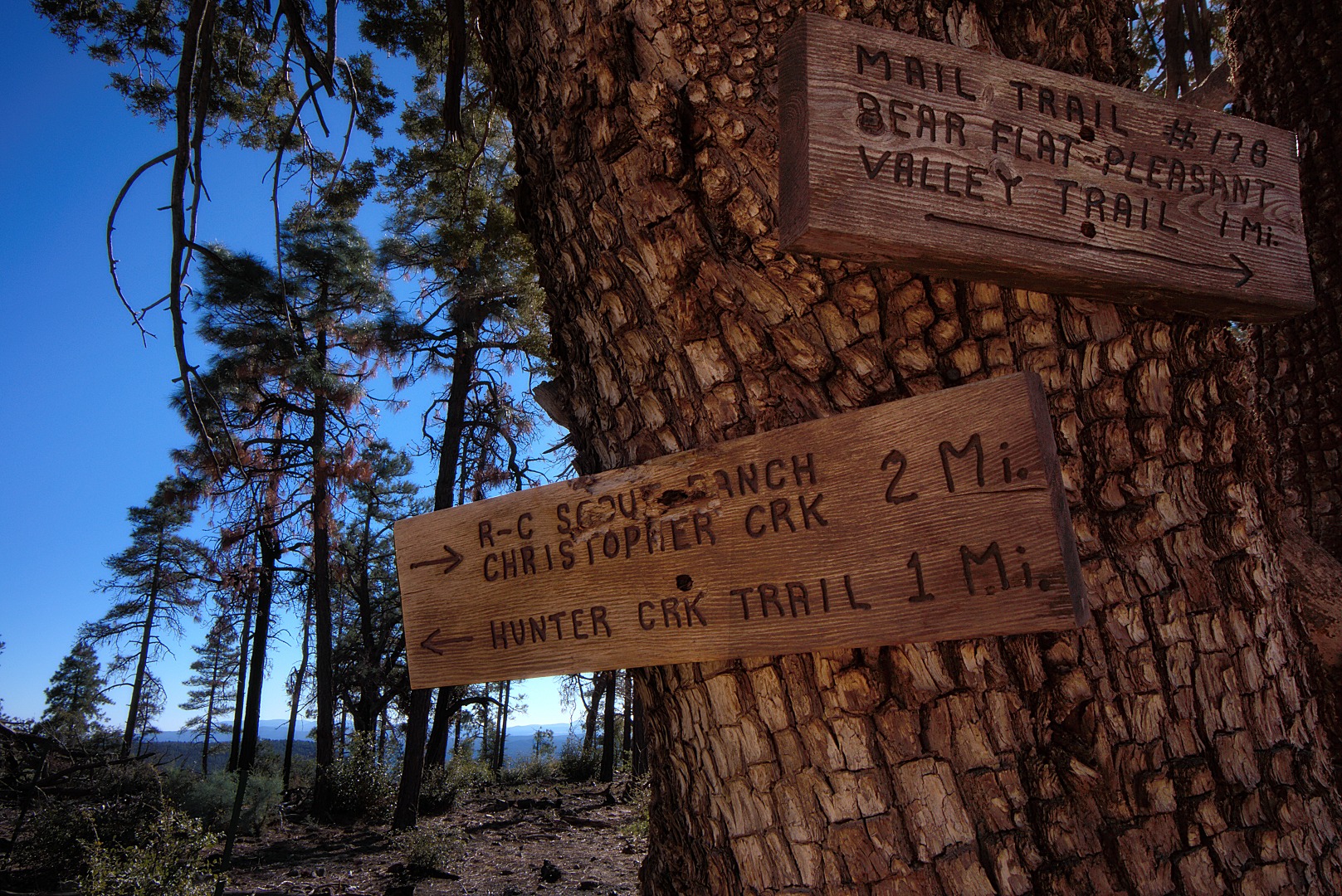 I turned around here because I had left the others and I feared that they might have started to worry about me.  (It turns out that they had.)

I took this photo of what I’m guessing is the Mogollon Rim from the clearing on the ridge: 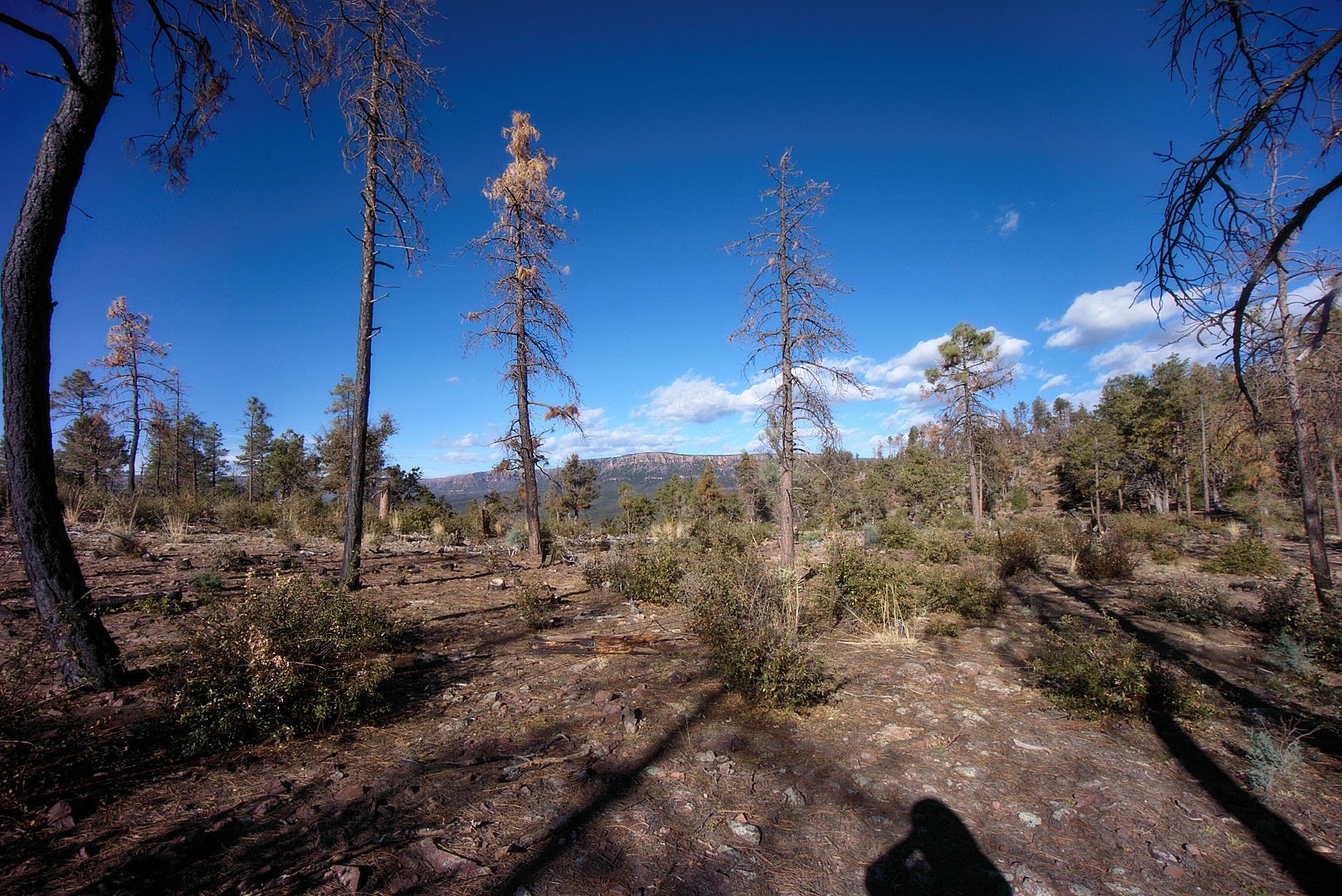 This photo was taken while looking in a more southerly direction: 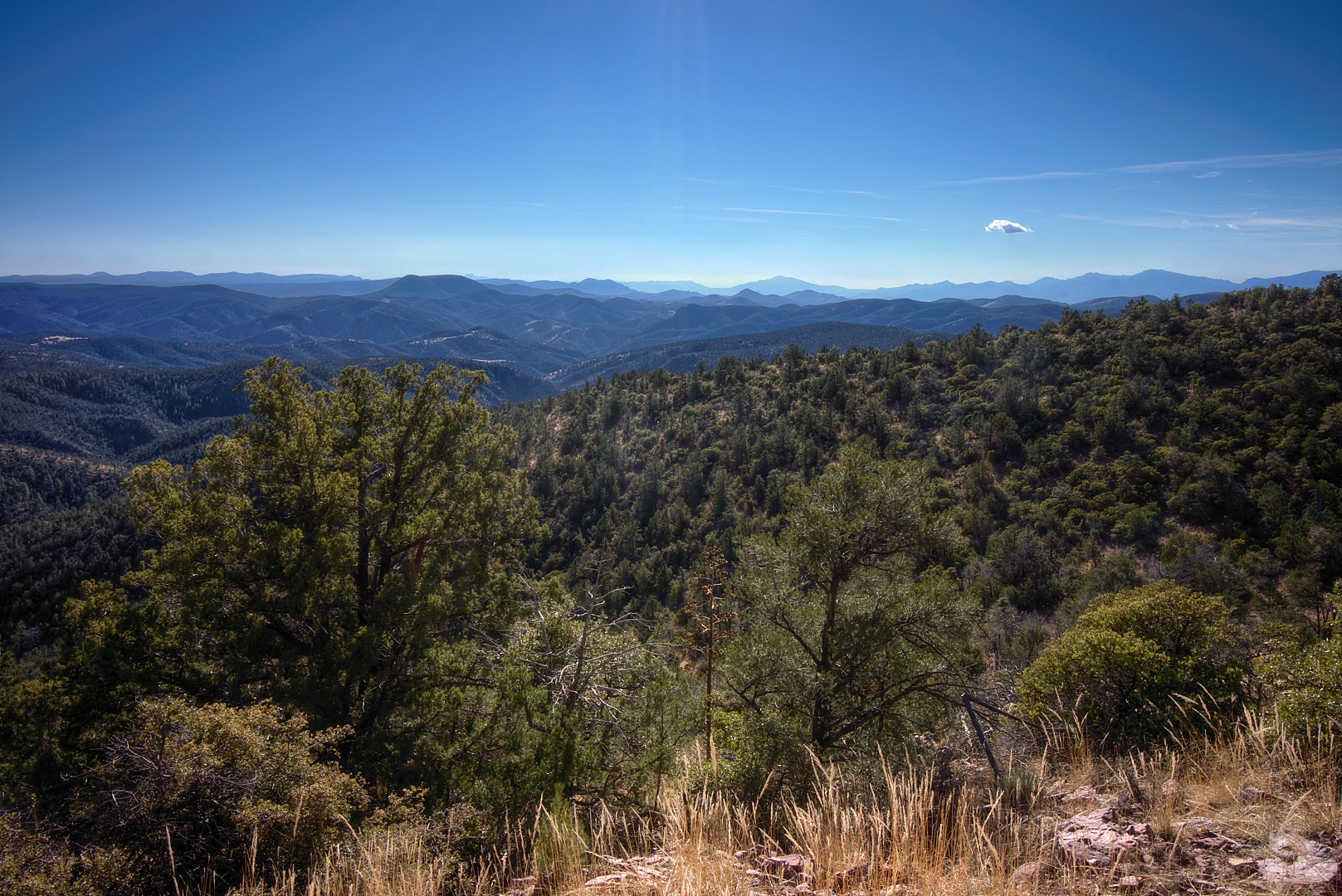 I got this photo as I was hiking back after rejoining the others.  The rim can be better seen in this photo.  You can also see the road that we drove in on. 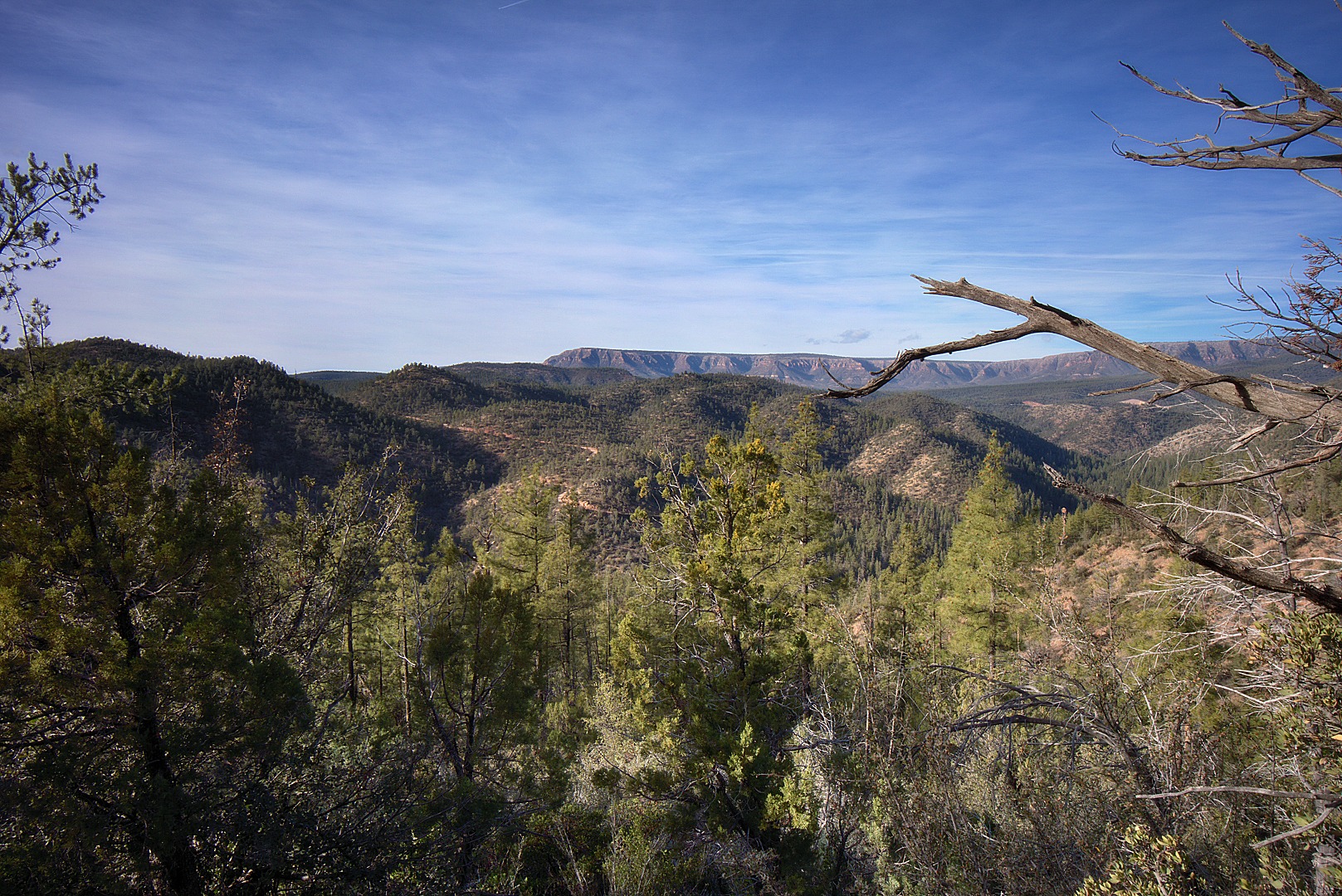 Instead of descending the treacherous switchbacks with which we started our hike, we instead descended a relatively wide road lined with very tall pines: 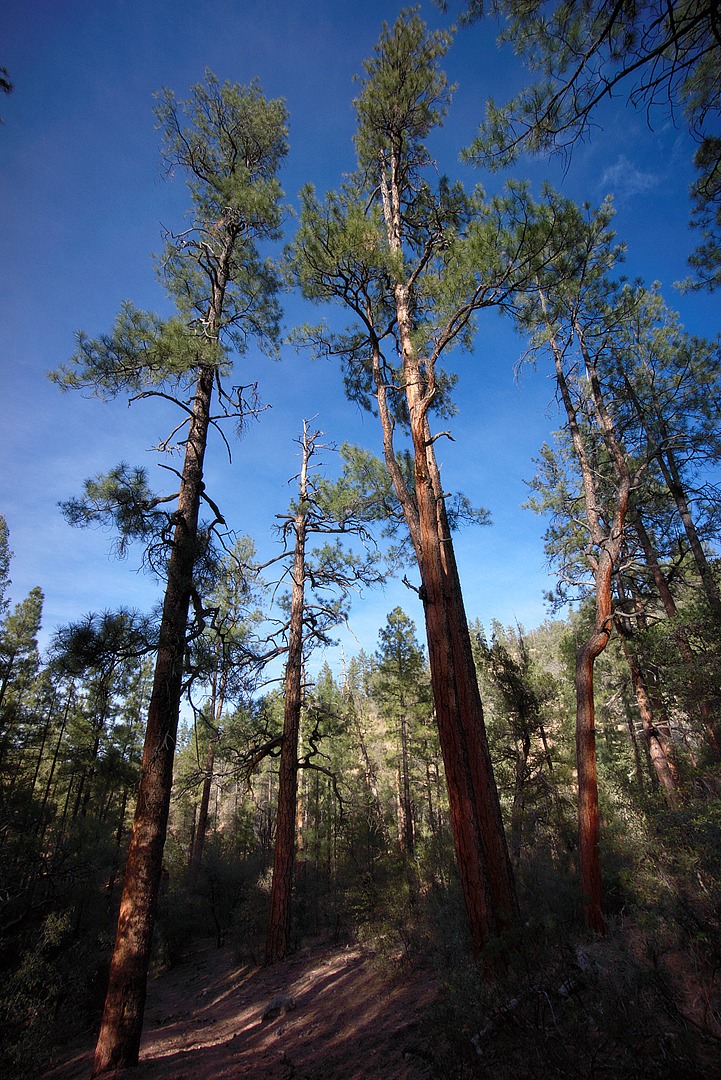