Scottsdale, after Sunset, from the Sunrise Trail

I got this shot on Saturday while hiking back on the Sunset Trail with Marilyn.  We came to an overlook area and saw the lights of Scottsdale along with a colorful, post-sunset sky.  I rested my camera on a large metal toolbox that the city keeps out there.  Presumably it has shovels, picks, and the like for trail maintenance purposes.  Anyway, the first several tries didn’t work out because I still had to level the camera and I was trying to do so by supporting the camera and lens with my fingers.  I finally got two rocks that I positioned in between the top of that metal toolbox and the camera.  It wasn’t perfect, but it allowed me to hold the camera steady enough to get the photo below.

This photo was created using three exposures at ISO 200, f/4.0, with exposure times of 1/2 second, 2 seconds, and 6 seconds.  I first blended the exposures together by hand.  From this, I created a color layer.  I interposed a tone layer set at 50% opacity above the original three layers that I had blended earlier and below the color layer. 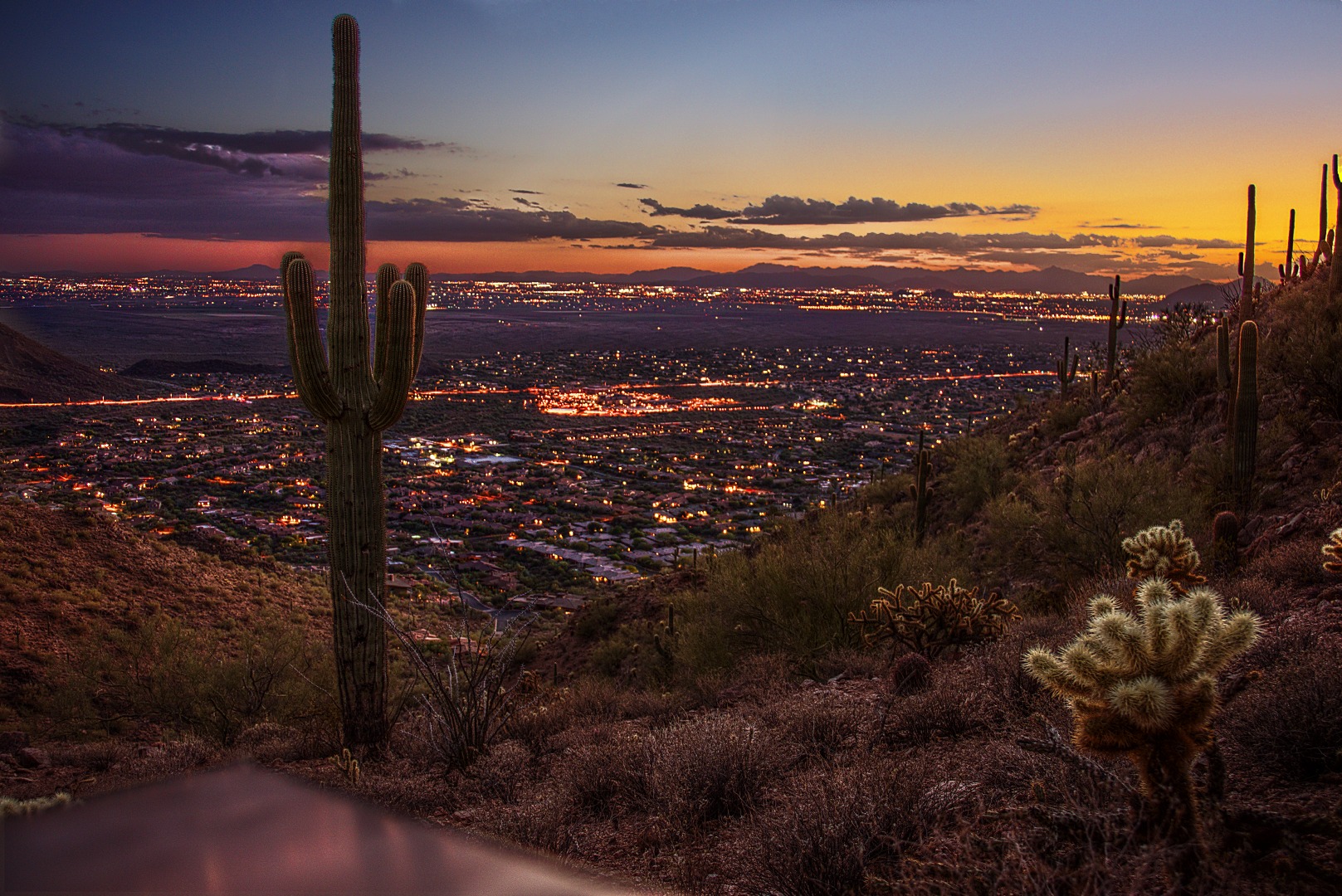 I have been asked about that big barren space is between the lights near the horizon and the lights nearer to the camera.  This is what I’ve figured out…

First, it’s important to know that we’re looking south and somewhat west in this photo. You can see that the sky is brighter at the far right in the photo. That’s where the sun had set perhaps 20-30 minutes before the photo was taken. (It got quite dark perhaps another 20 minutes after taking that photo – dark enough that we got out our headlamps so that we could be more certain of our footing on the way back. We thought we were locked in at the parking lot too, but luckily the gate senses vehicles that are trying to get out and automatically opens.)

Shea Blvd is the big, well lit road in the photo. If you start at the left edge of the photo, it starts a little over half way up and extends across most of the photo, angling slightly upward as you follow it to the right. The hill to the right in the immediate foreground eventually blocks our view of Shea Blvd. If you follow Shea Blvd from the left of the photo, you’ll see the lower slope of a small mountain just above the road – to the south. There is a small road which intersects Shea that’s visible in the photo. It goes south (and north) of Shea and runs between that small mountain and a hill to the west. That small road is 136th Street.

The big cluster of lights in the center of the photo, just to the north of Shea Blvd is Mayo Clinic. There are some residential areas which are part of Scottsdale just south of Shea in that photo, but they don’t extend very far south. Once I found these landmarks, I was able to look at a map to figure out the rest. Here’s a link to a map showing Shea and 136th St. You’ll have to zoom out a bit to see more of the surrounding area.

There is a big empty looking area south of those residential areas which are, in turn, south of Shea.  This sizable tract land used mostly for agricultural purposes.  There are some homes there too, but it’s much less densely populated than the cities which surround it. It belongs to the Salt River Pima-Maricopa Indian Community. To the south of that – i.e. the lights further on up the photo towards the horizon – are the cities of Mesa and Tempe. Mesa is more to the left and Tempe is more to the right. I can’t say for certain where one ends and the other begins – it may even be that Tempe isn’t visible at all in the photo. I think too that some of the southern portions of Scottsdale are visible off to the right. If you look to the far right, you can see a small portion of Camelback Mountain at the edge of the photo.

Here is another photo looking in the same direction, but taken from a different overlook.  I don’t like this shot as well, but it does show what the area looks like in the daylight. 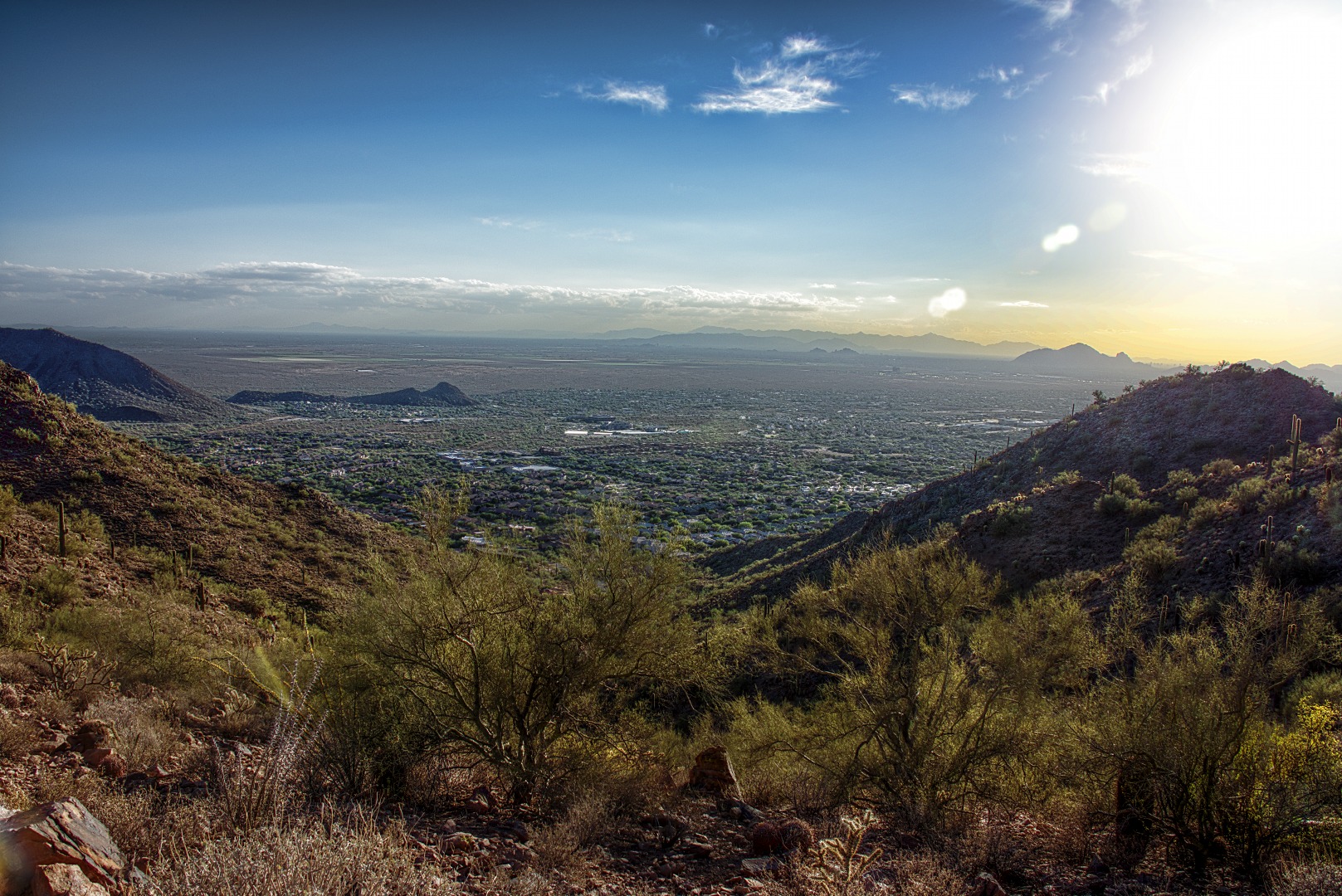