On Wednesday during our week’s stay in the Moab area during June of 2012, we hiked the Moab Rim Trail.  Known locally as “Moab’s Stairmaster”, it climbs over eight hundred feet within the first mile.  The trail description at the bottom exaggerates a bit, claiming an elevation gain of one thousand feet in a mile.  It is popular with some of the locals though because it’s close to town and provides a heck of a workout just hiking up to the rim and back, about two miles total.

The Moab Rim Trail is actually a jeep trail and a very difficult one at that.   Here is how the sign at the bottom describes it:

The Moab Rim Route follow the Kayenta sandstone ledge from here to the rim above the town of Moab.  The route is used by hikers, bikers, motorcyclists, and jeepers.  It gains 1,000 feet in elevation in about a mile.  The ledges make it particularly challenging to motorized vehicles.  The Moab Rim Route is rated as a “4+” route by the Moab Red Rock Four-Wheelers Jeep Club – its most difficult rating.  (4+ trails are not suitable for stock vehicles, and over 10% of modified vehicles can expect “major mechanical difficulties”.)

Hopefully, this shot will help to convey a sense of how steep the first section is.  Even though it’s steep, the footing is excellent. 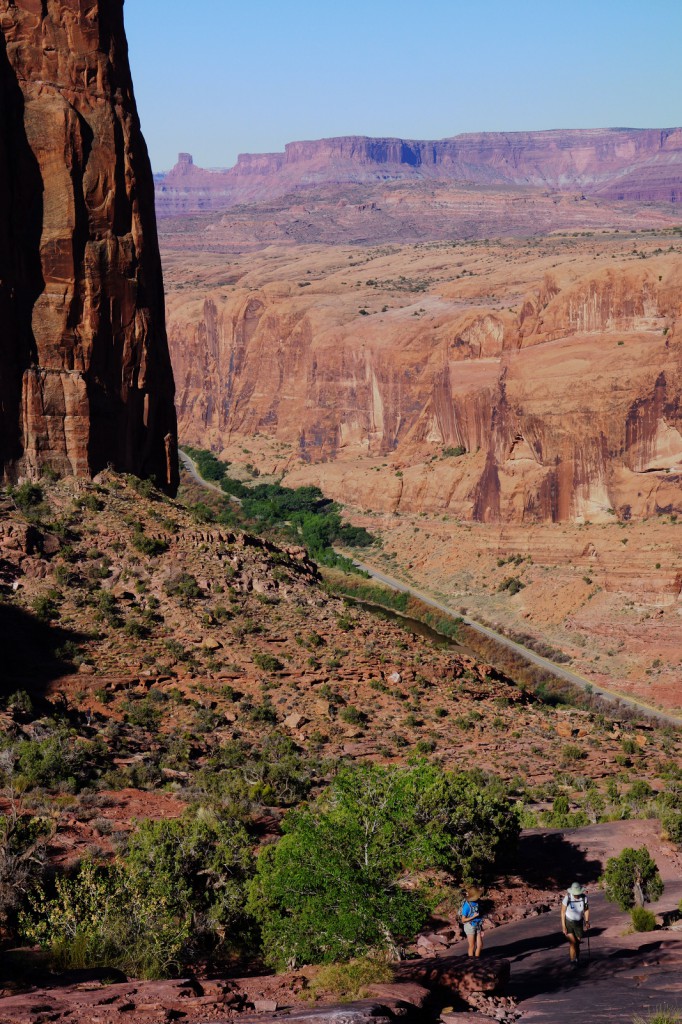 Marie took this photo of her Mom along the way: 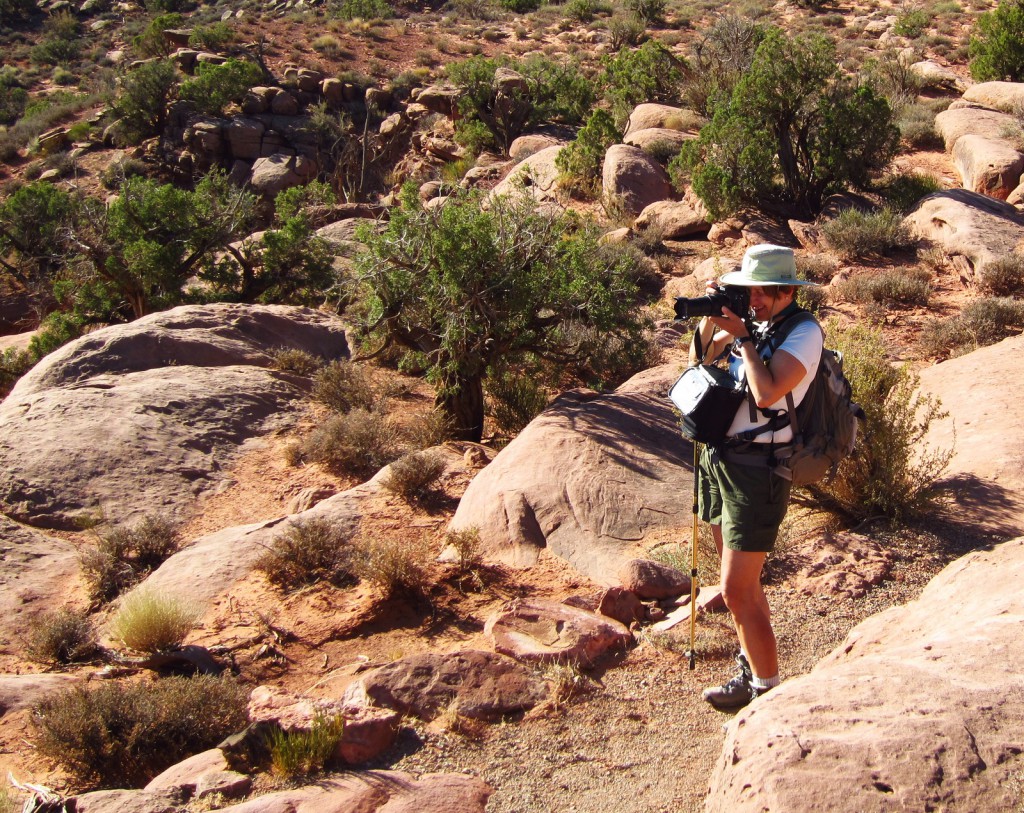 Marie took this photo of herself standing on the rim.  The town of Moab is in the background. 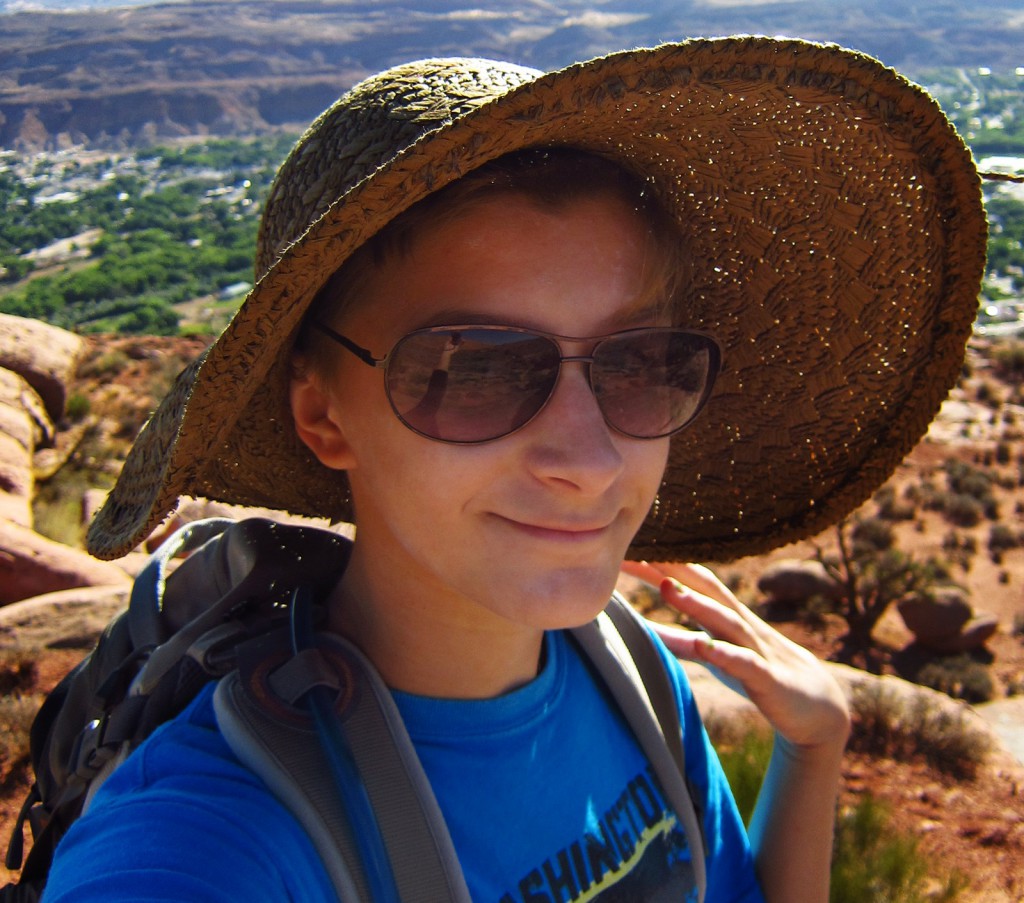 When I got up to the rim, I saw a plant standing alone with these yellow flowers: 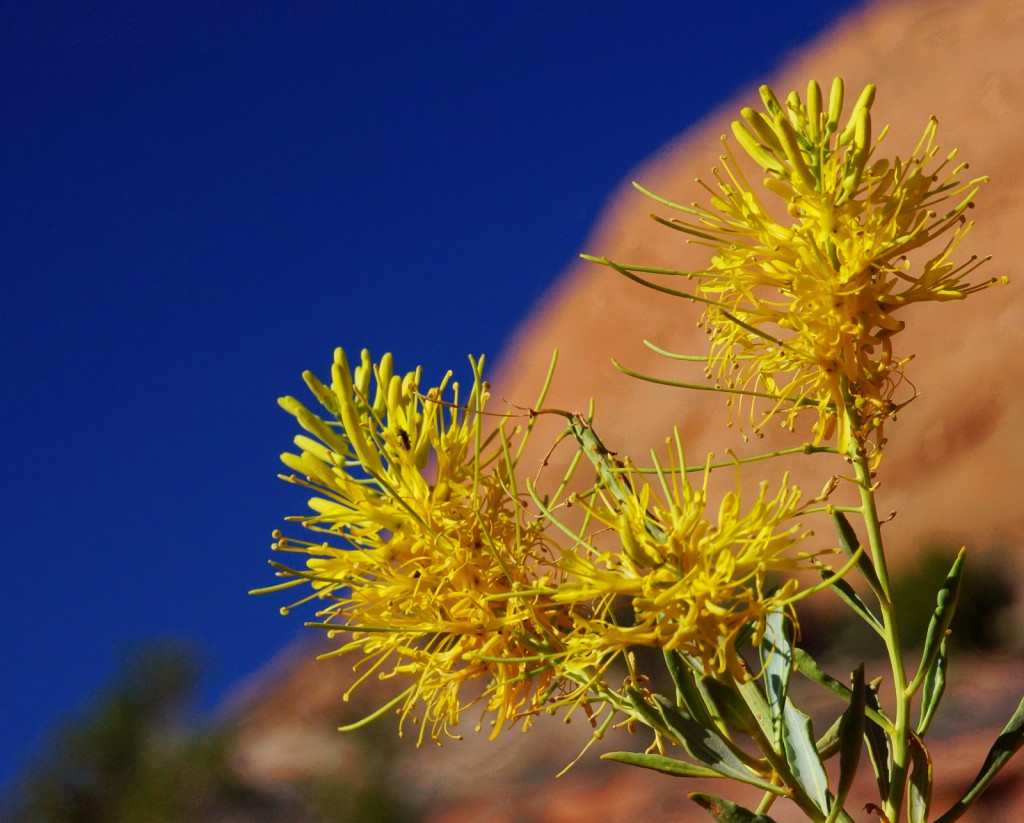 Marilyn and Marie amidst the sandstone: 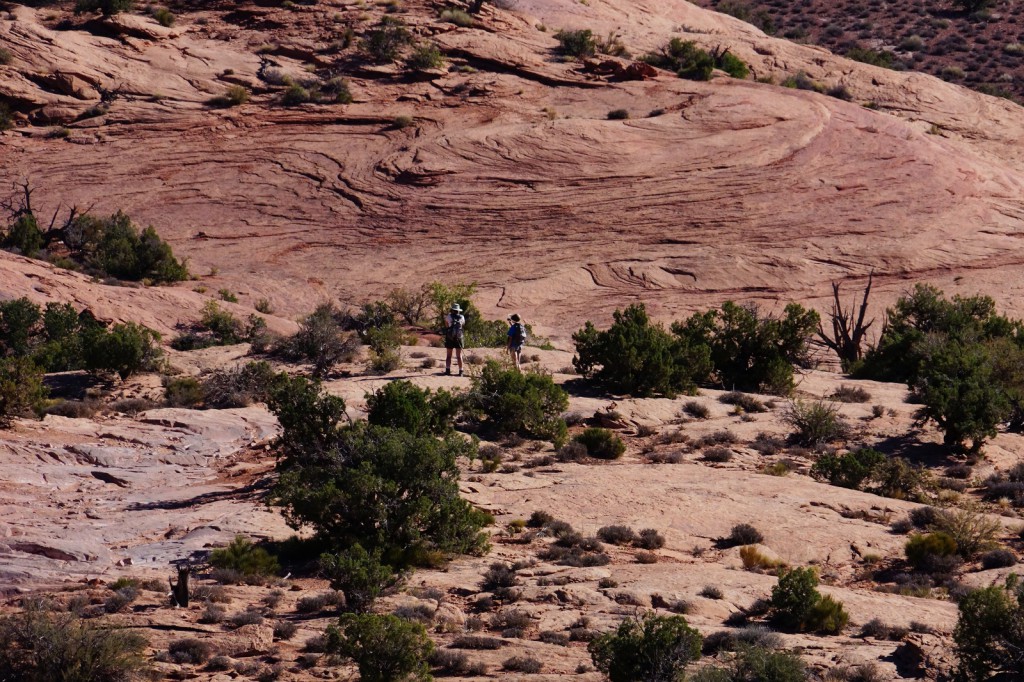 Marilyn took this photo of Marie hiking along side large potholes in the sandstone. 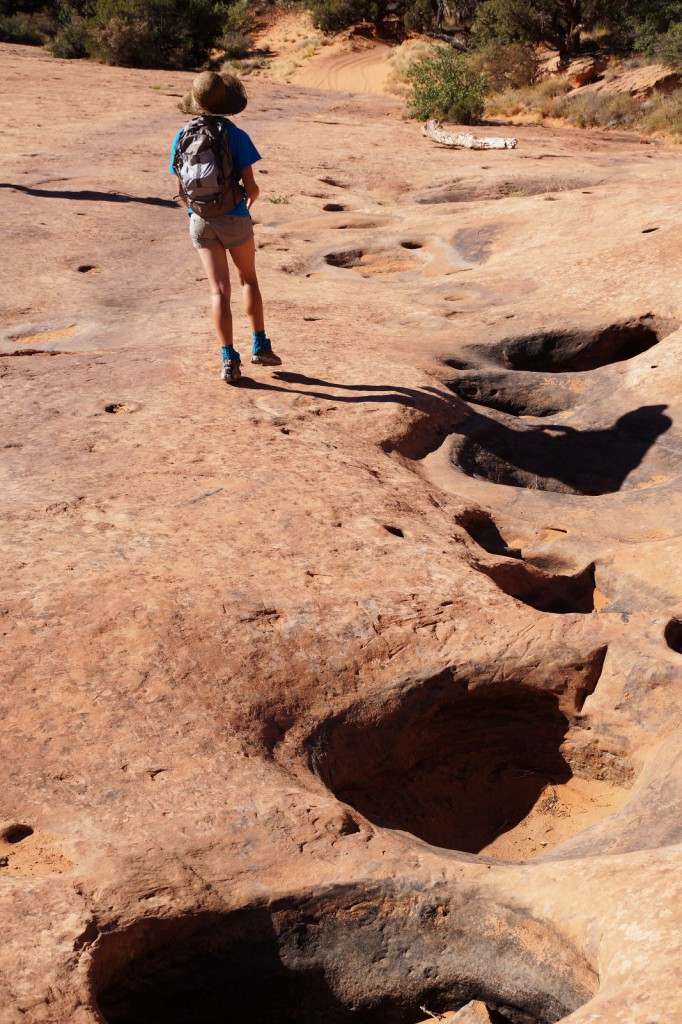 Marie took this photo of the trail wending its way into a valley. 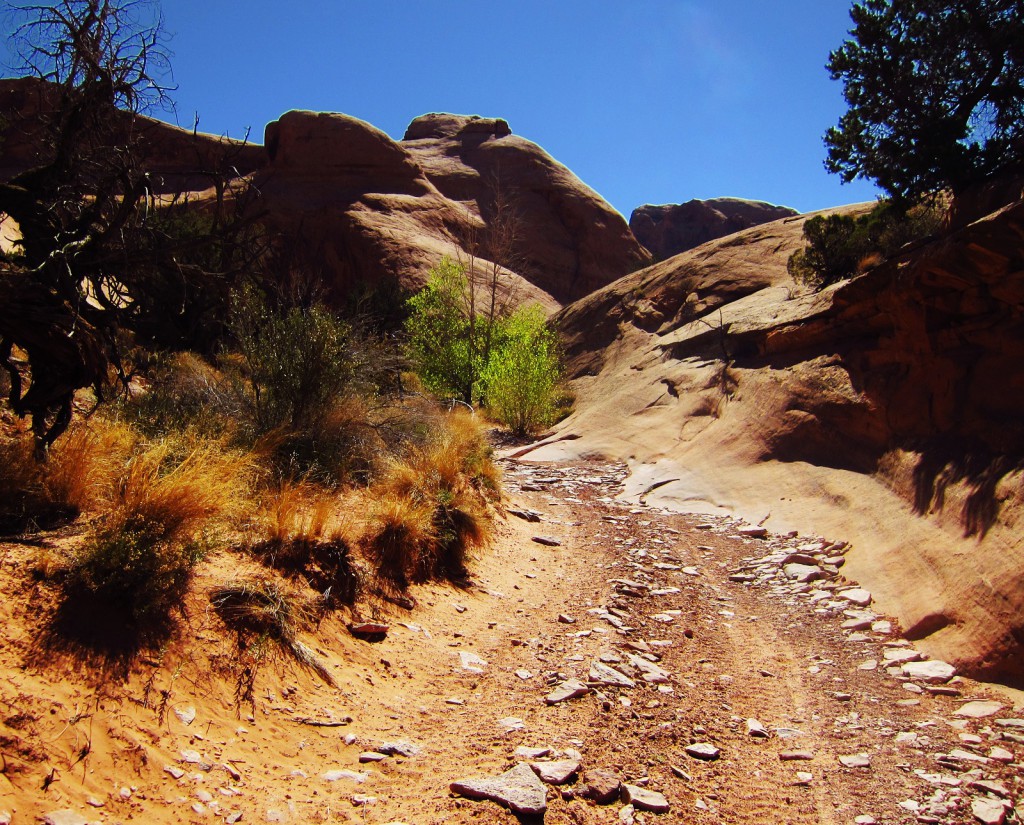 Marie, admiring the view just shortly before she and her Mom turned around: 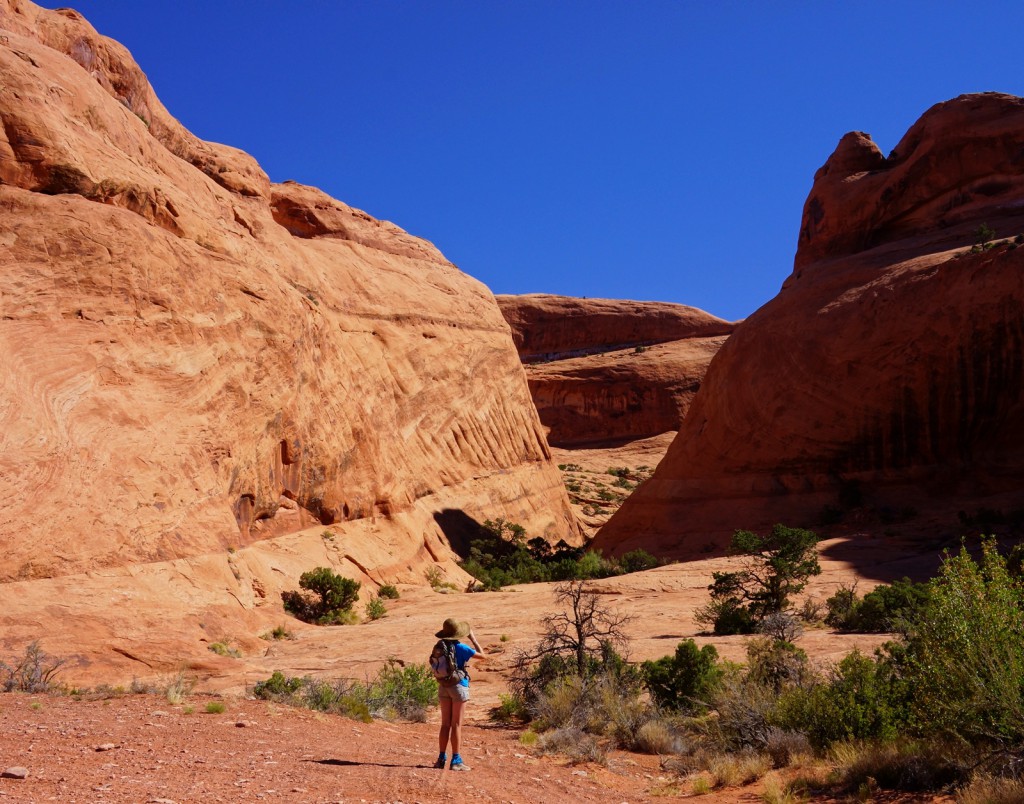 I continued on and saw, from afar, this pass through the wall of rock.  I don’t know if there is a trail which goes through that pass or not.  I’d like to hike closer sometime to find out. 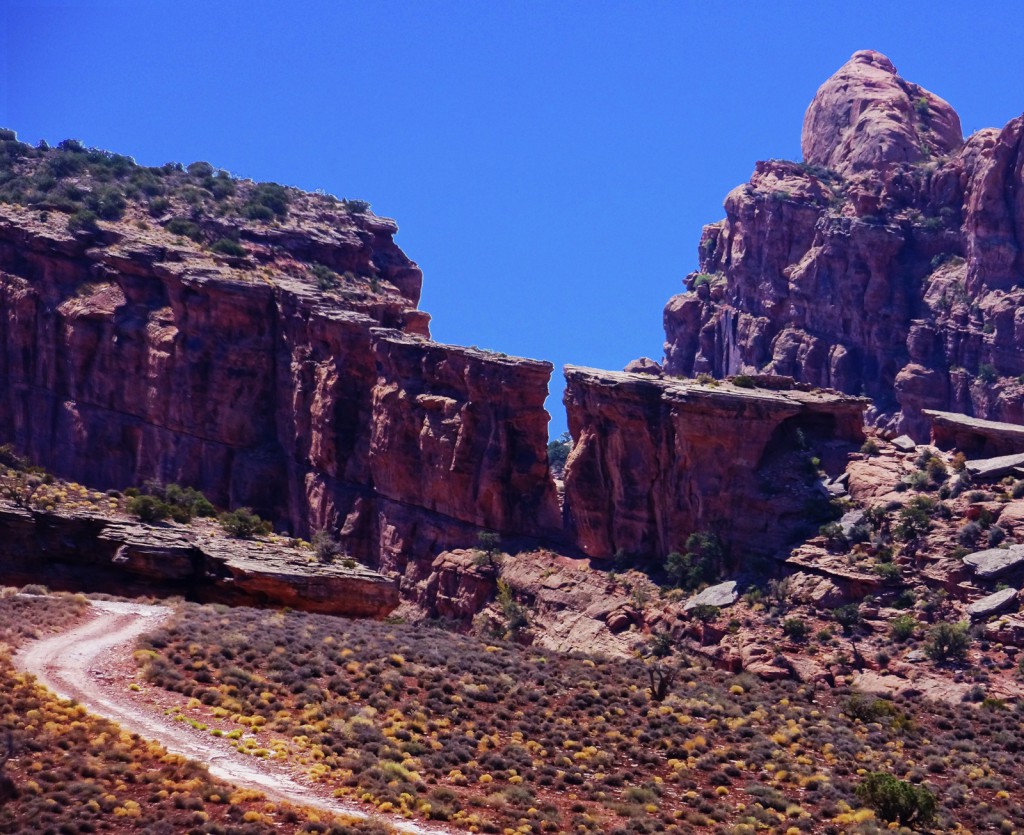 Another view from a bit further on down the trail.  At this point, I was perhaps halfway around the loop that would bring back to the girls. 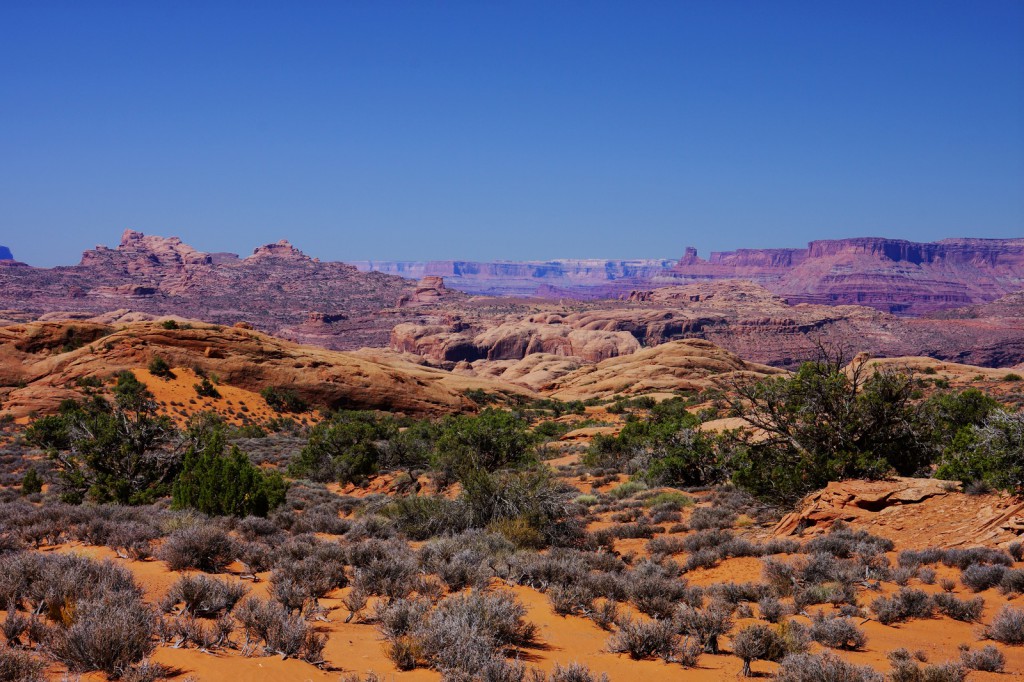 Another shot from the same location: 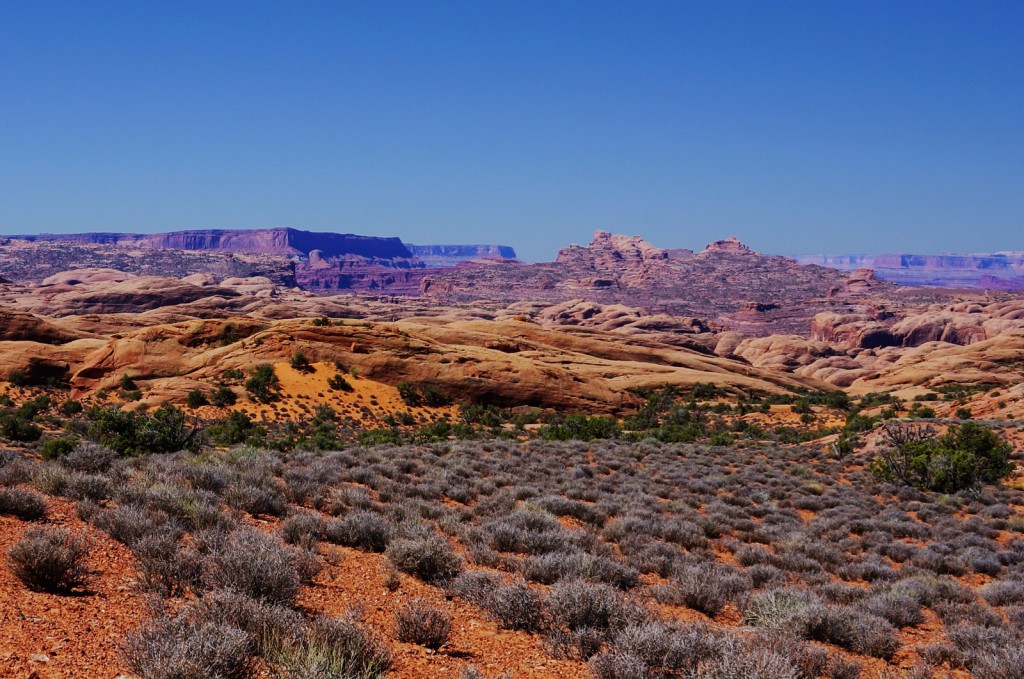 A shot looking back in the direction from where I had come.  I didn’t hike either of those roads visible off in the distance though.  But I would like to walk them sometime though. 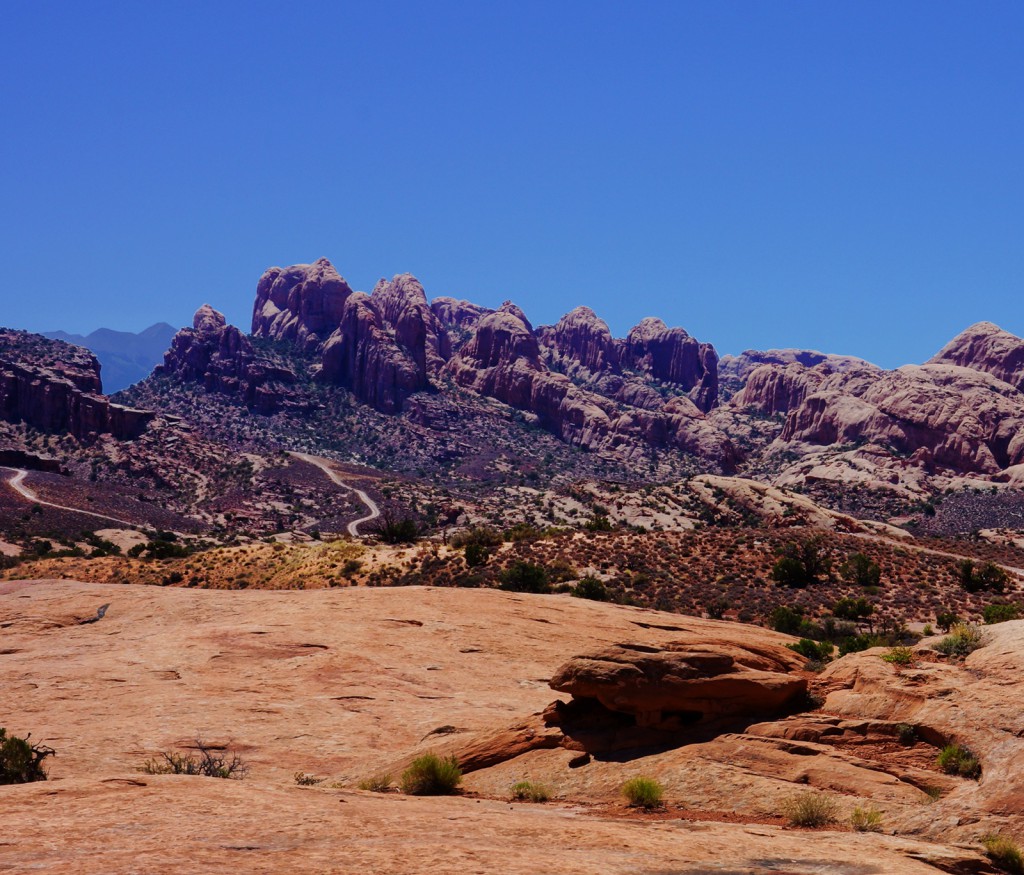 I eventually met up again with Marilyn and Marie and we hiked back to the rim together.  Here’s Marilyn somewhere near the rim: 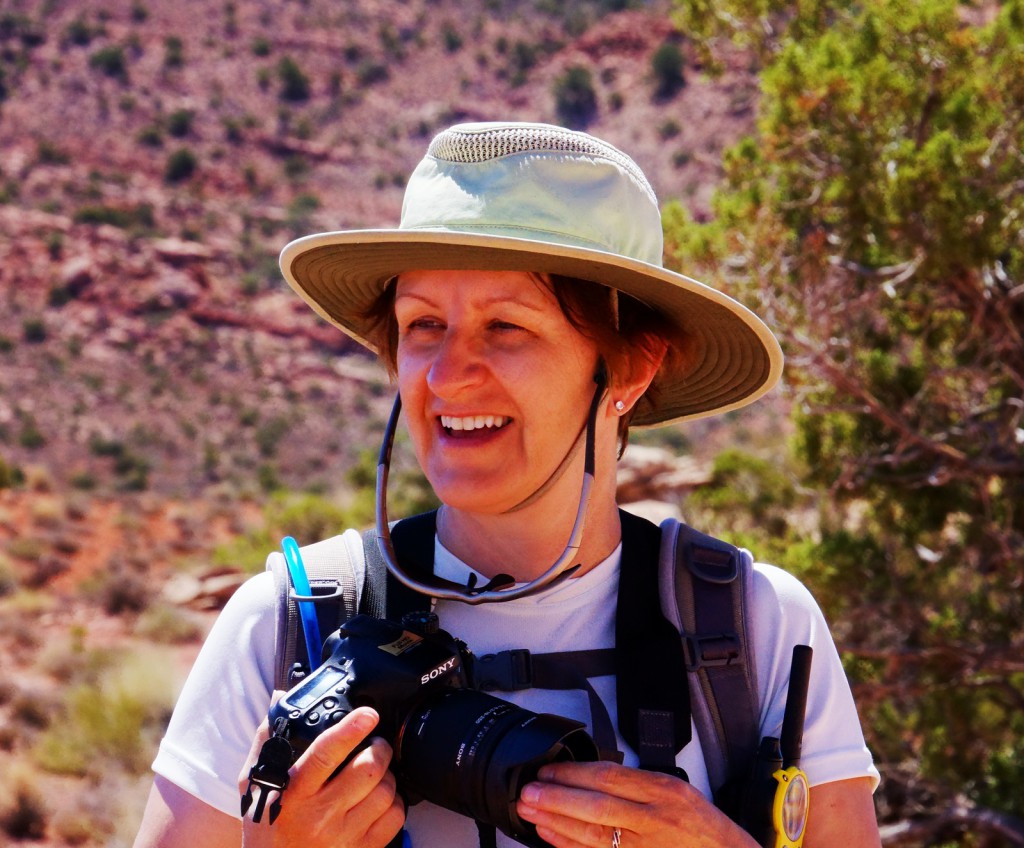 A view of Arches National Park from the Moab Rim.  The arch visible in this photo is the South Window, I think. 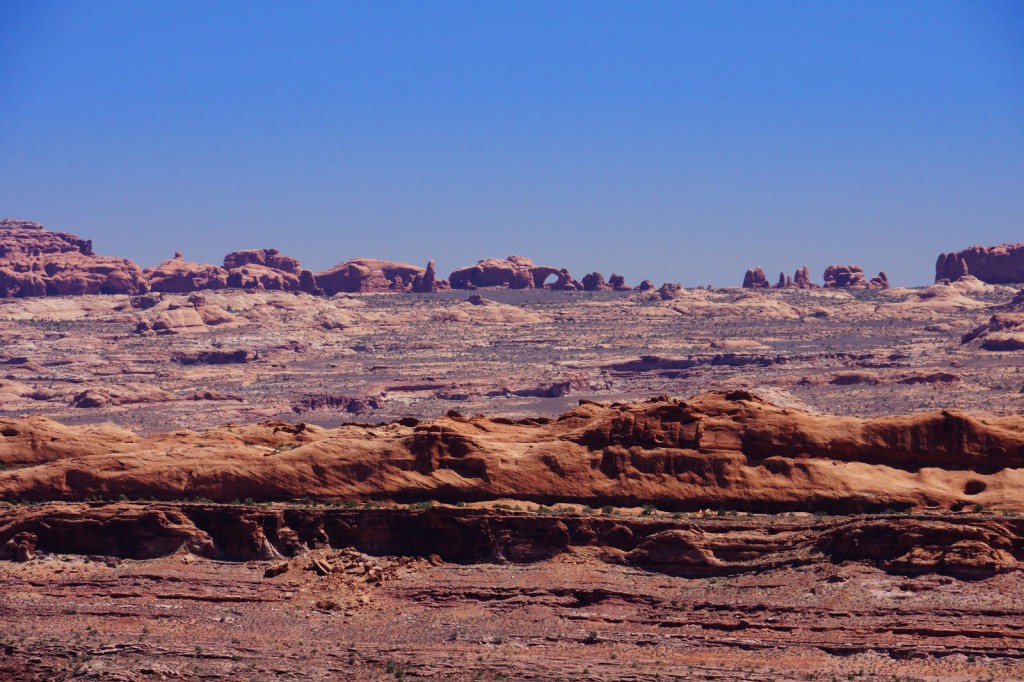 Marilyn took this photo of Moab, below, and the La Sals in the distance. 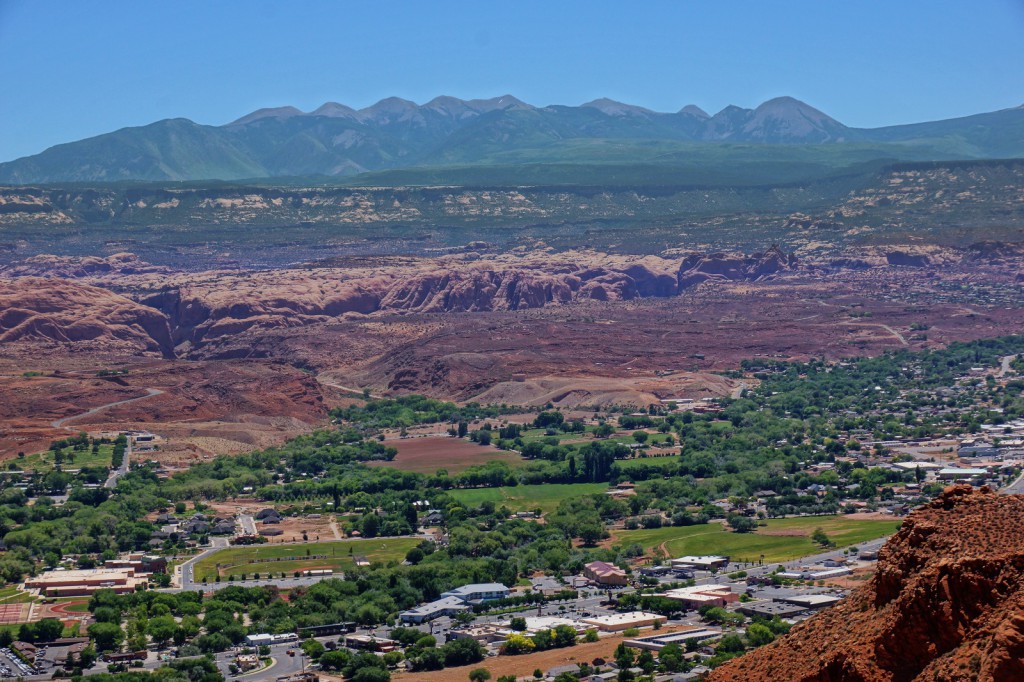 A view of the Colorado River while descending the Moab Rim Trail: 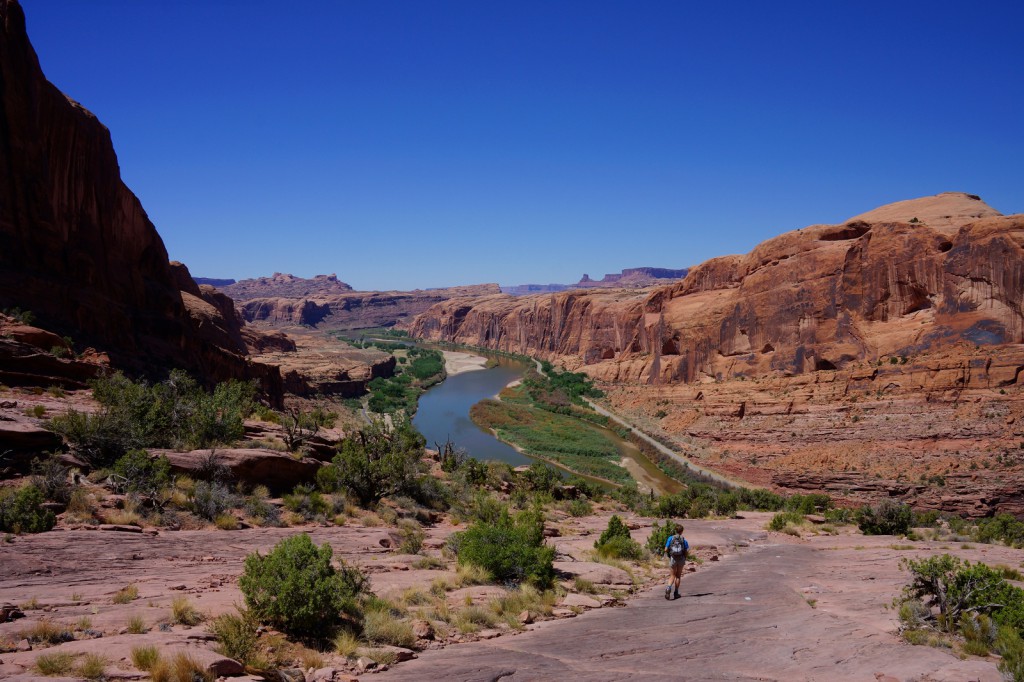 After the Storm in McDowell Mountain Park